Treatment decisions of bladder cancer in patients older than 85 years: a SEER-based analysis 2011–2015

Bladder cancer (BCa) is the ninth most common malignancy, with more than 429,000 new cases and 16,500 deaths each year globally (1). Although the mortality rate of BCa tends to decrease, BCa still ranks as the 13th most frequent cause of cancer death (2). BCa is a disease of the elderly. The risk of developing BCa increases gradually with age and the median patient age at diagnosis is 73 years. Previous data revealed that the peak incidence of BCa occurs at 85 years and that there is higher mortality in elderly patients with BCa (3-5). Nevertheless, treatment decisions for elderly individuals with BCa remains a challenge today and in the foreseeable future.

Age and comorbidities significantly influence the management and treatment outcome of elderly patients with BCa. A multicenter analysis pointed out that advanced age should not constitute a contraindication to major surgery. Radical cystectomy (RC) and urinary diversion could be suitable treatment for carefully selected elderly patients (6). RC remains the standard management for nonmetastatic muscle-invasive bladder cancer (MIBC). External beam radiotherapy in combination with concurrent chemotherapy is an alternative option for carefully selected patients (7,8). There is a lack of evidence-based guidelines for managing all stages of BCa for patients over 85 years of age. The current guidelines for the treatment of BCa do not preclude curative therapies for elderly patients. It is recommended that the treatment decisions should not be based solely on chronological age. However, life expectancy should be taken into consideration (9). The complication rate of surgery appears comparable between young and aged patients with similar tumor stages (10). Nevertheless, many elderly patients are usually treated with more conservative strategies, although physiological and psychological status varies greatly among them.

We employed the Surveillance, Epidemiology, and End Results (SEER) database to characterize treatment decisions among BCa patients over 85 years in the USA. In addition, we analyzed the management and outcomes of all stages of BCa to determine the impact of different treatment modalities on overall survival (OS) in this patient cohort. We present the following article in accordance with the STROBE reporting checklist (available at https://tcr.amegroups.com/article/view/10.21037/tcr-22-944/rc).

We used the SEER database to identify patients aged >85 years diagnosed with BCa between 2011 and 2015. SEER Stat software version 8.3.6 was used to perform all queries. This dataset includes information covering approximately 34.6% of the American population. We excluded patients with distant metastasis, unknown T stage, and therapeutic modalities (surgical methods, radiotherapy, and chemotherapy). Non-muscle-invasive bladder cancer (NMIBC) patients without grading information were also excluded. Our study population comprised 9,321 patients (Figure 1). We collected the following data for each case: Tumor-Node-Metastasis (TNM) stage, tumor grade, surgical methods, radiotherapy and chemotherapy, year of diagnosis, and demographic characteristics, including age, sex, race, and marital status. We also collected data concerning education level, employment of the county, where the patient was registered and the average income of its population. The ethical approval of this study was exempt from the Peking University First Hospital Review Board because all information from the SEER Database was deidentified. The study was conducted in accordance with the Declaration of Helsinki (as revised in 2013). 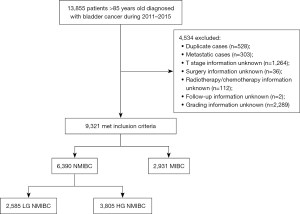 We consolidated the above parameters to perform subgroup analysis. We subdivided patients into low-grade NMIBC (LG NMIBC), high-grade NMIBC (HG NMIBC), and MIBC groups. In addition, we categorized the following surgical methods according to the extent of the operation: transurethral surgeries, including transurethral bladder tumor resection (TURBT) (minor surgery), partial cystectomy or RC, including pelvic lymphadenectomy (major surgery). According to the treatment regimens, the patients were divided into the following three groups: patients who received no treatment after TURBT (TURBT alone group), patients who received intravesical instillation or minor surgery with or without intravesical instillation after TURBT (minor therapy group), patients who underwent major surgery with or without adjuvant therapy (radiotherapy and/or chemotherapy), and adjuvant therapy with or without minor surgery (major therapy group).

Prognosis of patients with NMIBC 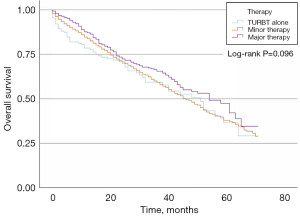 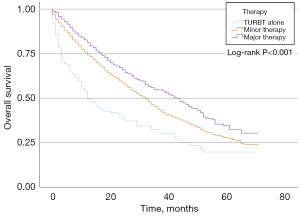 Prognosis of patients with MIBC

In the MIBC cohort, 116 (4.0%) patients did not receive surgery after TURBT, 1,533 (52.3%) patients underwent minor surgery, and 1,395 (43.7%) patients received major surgery. Table 3 shows the univariable and multivariable analyses of the prognostic factors for OS in the MIBC group. Younger age, sex, lower T stage, lower N stage, minor therapy, and major therapy were correlated with a better OS in univariable and multivariable analyses. KM curves of OS according to the three treatment groups are represented in Figure 4. For the MIBC cohort, patients who underwent major therapy had a lower hazard ratio (HR) than those who underwent minor therapy (Table 3). Furthermore, we explored the effect of three common treatment regimens on the prognosis of patients receiving major therapy, including RC, TURBT plus radiotherapy plus chemotherapy (trimodal therapy), and TURBT plus radiotherapy (Figure 5). Trimodal therapy achieved a better prognosis than RC (HR 0.777; 95% CI: 0.625–0.968; P=0.024). The prognosis of patients who received TURBT plus radiotherapy was worse than those who received RC (HR 1.395; 95% CI: 1.147–1.697; P=0.001). Trimodal therapy led to better prognosis among the three groups.

Clinical and county factors for overall survival in MIBC patients 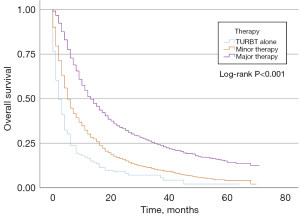 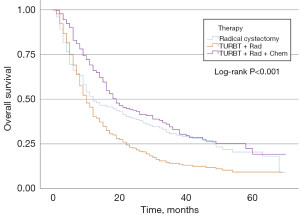 In addition, we assessed the collinearity of county factors, including education level, unemployment rate, families below poverty, persons below poverty, median family income, and median household income. At least bachelor’s degree, unemployment rate, and median family income were included in univariable and multivariable analyses, none of which were risk factors for prognosis.

Age is an important risk factor for developing BCa. It was reported that the peak incidence of BCa is in the 85 to 95-year age group in developed countries and mortality from BCa is also higher in elderly people (3). However, the treatment of BCa in this age group is still controversial. The substantial personal differences between very elderly patients make treatment decisions more complicated than those of younger cohorts (11).

The elderly generally tolerate treatments for NMIBC well. A recent study suggested that TURBT should be performed for all newly diagnosed BCa patients. Restaging TURB was also recommended when clinically indicated (12). However, the sample size was too small to draw a definitive conclusion. In our LG NMIBC cohort, there was no significant difference in prognosis among the three treatment groups (Figure 2, P=0.096). Therefore, minor and major therapies are not recommended after the first TURB in LG NMIBC patients.

It becomes clear that the treatment regimen of patients in different age groups with nonmetastatic MIBC differs in the UK (14,15). A population-based analysis of cancer registry data in the UK indicated that the proportion of patients under 60 years and over 80 years receiving curative treatment was 52% and 12% respectively (16). A recent study suggested that more conservative strategies should be considered in MIBC because of the low survival rate of very old patients regardless of the treatment. However, the number of patients in this study was too small to draw a definite conclusion, and cystectomy was rarely used at the 6 institutions of the study (13). Whether it is reasonable to undertreat elderly patients is uncertain based on the available literature (17). A previous review suggested that differences in prognosis between young and old patients may be due to less aggressive and effective therapies for the elderly. It was inadequate to make clinical decisions based solely on chronological age for the elderly with BCa (4). Advanced age should not be regarded as a barrier to treatment (18). In our research, the KM curves of the MIBC cohort indicated that major therapy leads to better OS. Multivariable analysis also showed that major and minor therapies were independent risk factors for OS. Patients who underwent major therapy had a lower HR than those who underwent minor therapy, indicating that major therapy might exert a better protective effect on elderly BCa patients. We further analyzed the effect of three common treatment regimens on the prognosis of patients receiving major therapy, including RC, TURBT plus radiotherapy, and trimodal therapy. Trimodal therapy achieved a better prognosis than RC (HR 0.777; 95% CI: 0.625–0.968). The prognosis of patients who received TURBT plus radiotherapy was worse than those who received RC (HR 1.395; 95% CI: 1.147–1.697). Several studies found that patients who underwent radical cystectomy had a better prognosis than those who underwent trimodal therapy (19-21). However, these analyses did not report specific outcomes of elderly patients. Thus, according to our study, trimodal therapy is recommended for MIBC patients over 85 years of age.

The present study results should be conservatively interpreted, considering several limitations. First, this study is retrospective with an inevitable selection bias. However, we minimized the discrepancies and biases, taking advantage of the large representative sample from the USA collected using the SEER program. Moreover, larger sample size was helpful because most studies used small sample sizes and limited datasets in a single center. In addition, the SEER database does not provide information about additional confounding factors, such as renal function (22), ASA score, and Charlson comorbidity score. However, they failed to predict OS in patients over 85 years of age in a recent study (13). The lack of this information prevented us from evaluating whether patients in the three groups had similar health conditions. The baseline of the three groups was easily biased since patients in better conditions were preferably recommended with more aggressive therapies, while those with poorer health leaned toward safer and conservative management. Finally, several studies have suggested that the extent of pelvic lymph node dissection was associated with prognosis (23-25) in patients <80 years and octogenarians (26). However, the specifics regarding treatment regimens, including the type of lymph node dissection, radiotherapy, and chemotherapy (adjuvant, neoadjuvant, dose drugs, and the cycle of chemotherapy and radiotherapy), were not provided by the SEER database may limit the interpretation of surgical quality, radiotherapy, and chemotherapy. Finally, some new treatments such as immune checkpoint inhibitor therapy were not included in the analysis. Thus, prospective studies with large cohort are needed to define a treatment standard. Nevertheless, our study provides a contemporary and generalizable assessment of therapeutic patterns among a large number of very old patients.

To conclude, our analysis based on a larger cohort shows that minor and major therapies do not lead to better prognosis after TURBT in LG NMIBC. Major therapy has better oncological outcomes in MIBC and HG NMIBC than minor therapy. Trimodal leads to longer OS in MIBC patients over 85 years. In addition, all county factors, including education level, unemployment rate, and median family income were not risk factors for prognosis.

Reporting Checklist: The authors have completed the STROBE reporting checklist. Available at https://tcr.amegroups.com/article/view/10.21037/tcr-22-944/rc

Conflicts of Interest: All authors have completed the ICMJE uniform disclosure form (available at https://tcr.amegroups.com/article/view/10.21037/tcr-22-944/coif). The authors have no conflicts of interest to declare.