A 70-year-old female non-smoker presented a strange shadow in the lower lobe of the left lung for health check without any symptoms. The positron emission tomography-computed tomography (PET-CT) examination results showed that the soft tissue density was nodular in posterior basal segment of left lung’s lower lobe. The lingual part of the upper lobe of the left lung had mixed density mass with ground glass and solid nodules. Meanwhile, the lymph node metastasis was considered in the left hilum and main pulmonary artery window of the mediastinum. And the mixed density nodules were also observed in posterior basal segment of the right lung’s lower lobe. A needle biopsy in the lower lobe of the left lung revealed a malignant tumor with poor differentiation. Images of low magnification showed that tumor tissue is made up of two different components with a sharp boundary histopathologically (Figure 1A). The poorly differentiated component was SCLC, accounting for approximately 70% (Figure 1B); the other area was enteric adenocarcinoma, accounting for nearly 30% (Figure 1C). Immunohistochemically, both parts were strongly positive for cytokeratin (CK), but the adenocarcinoma area was more apparent (Figure 1D,1E). Only the area of enteric adenocarcinoma was positive for cytokeratin 7 (CK7) (Figure 1F,1G), when stained with synaptophysin, the SCLC component was positive (Figure 1H,1I). 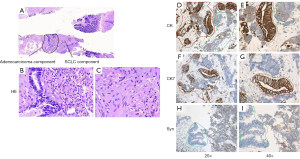 The patient was advised to perform a puncture biopsy of the lesion in the right lung again to further clarify the nature of nodules, but the patient and her family refused the puncture biopsy. PET-CT showed an increase of standard uptake value (SUV) greater than 2.5 in the right lung. After multi-disciplinary treatment (MDT), imaging and pathology experts agreed that the nodules of right lung were metastatic lesions. The pathological stage was stage IV (cT2N2M1) with local invasion and intrapulmonary metastasis. Initially, the patient received EP chemotherapy for the first cycle. On December 24, 2020, EGFR p.L861Q (EX21) mutation and Breast Cancer Susceptibility Genes (BRCA2) deficiency were detected on the punctured tissue by next-generation sequencing (NGS) analysis with a 500-gene panel. A week later, the patient was treated with gefitinib and EP chemotherapy as maintenance therapy (from December 2020 to February 2021). Luckily, according to the imaging results, this patient reached partial response. The lung lesions had shrunk more than 30%, and the mediastinal lymph nodes had shrunk compared with the previous. Subsequently, the patient continued the original treatment (gefitinib and EP chemotherapy) from April 2021 to June 2021. The thoracic computed tomography showed the patchy shadow of the left lower lobe was better than before, the left upper lobe nodules, the right lower lung nodules, and the multiple small lymph nodes of mediastinum and left hilum showed no progress compared to before (Figure 2). 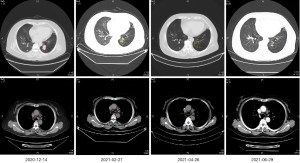 All procedures performed in this study were in accordance with the ethical standards of the institutional and/or national research committee(s) and with the Helsinki Declaration (as revised in 2013). Written informed consent was obtained from the patient for publication of this case report and accompanying images. A copy of the written consent is available for review by the editorial office of this journal.

CSCLC is an uncommon subset of SCLC, characterized by the mixture components of SCLC and NSCLC. The exact mechanisms and histogenesis of CSCLC remain unclear. Enteric adenocarcinoma is a rare subtype of NSCLC as well; the histomorphology and immunohistochemistry are very similar to lung metastatic colorectal cancer (4). The positive rate of the driver gene in primary lung enteric adenocarcinoma is also different from lung adenocarcinoma (5). In lung adenocarcinoma, the prevalence of EGFR mutations ranged from 30% to 40% in Asian patients compared to 10–20% in non-Asian patients, whereas the prevalence for kirsten rat sarcoma viral oncogene (KRAS) mutations was 8–10% in Asian and 20–30% in non-Asian (5). In enteric adenocarcinoma, the driver gene EGFR mutation-positive rate was only 4.7%, and the KRAS mutation-positive rate was 46.6% (6). In this case, EGFR sensitive mutation (c.2582T>A; p.L861Q) was detected. EGFR-TKIs have been recommended for patients NSCLC with EGFR sensitive mutations in the 2020 national comprehensive cancer network (NCCN) Guidelines.

The previous report indicated that the NSCLC element of CSCLC exhibits lower reactivity to chemotherapy, a treatment option frequently employed for pure SCLC (7). The results also provided preliminary evidence that CSCLC patients with EGFR sensitive mutations may consider EGFR-TKI combined with EP chemotherapy. Moreover, whether or not the survival of CSCLC varies from the SCLC is also up for debate (8,9). Recent research has revealed that the prognosis for CSCLC was worse than pure SCLC (10).

To our knowledge, the case SCLC with pulmonary enteric adenocarcinoma is the first report. For such uncommon cancer, there are not enough clearly defined management guidelines. Therefore, treatment need to be tailored and individualized, and should concern molecular characteristics of different compositions.

The authors thank the patient for agreement to the publication of the report. This work of partial data and collection was supported by Clinical Oncology Research Alliance (CORA).

Reporting Checklist: The authors have completed the CARE reporting checklist. Available at https://tcr.amegroups.com/article/view/10.21037/tcr-22-1171/rc

Conflicts of Interest: All authors have completed the ICMJE uniform disclosure form (available at https://tcr.amegroups.com/article/view/10.21037/tcr-22-1171/coif). The authors have no conflicts of interest to declare.

Ethical Statement: The authors are accountable for all aspects of the work in ensuring that questions related to the accuracy or integrity of any part of the work are appropriately investigated and resolved. All procedures performed in this study were in accordance with the ethical standards of the institutional and/or national research committee(s) and with the Helsinki Declaration (as revised in 2013). Written informed consent was obtained from the patient for publication of this case report and accompanying images. A copy of the written consent is available for review by the editorial office of this journal.