In recent decades, with the change of environment, the continuous improvement of living and medical standards, the transformation of people’s health awareness and the continuous promotion of cancer screening, the overall incidence and mortality of bladder cancer (BCa) in China has been on the rise (1,2). Non-muscle invasive bladder cancer (NMIBC) is a group of superficial bladder tumors (Ta, T1, and carcinoma in situ) that account for 70% to 75% of new BCas (3,4). The European Urological Association and American Urological Association recommend transurethral resection of bladder tumor (TURBT) combined with intravesical Bacillus Calmette-Guérin (BCG) perfusion for moderate or high risk NMIBC (5-7). Despite its effectiveness, BCG treatment can lead to local side effects in 62.8% of patients and 30.6% of patients with systemic side effects. Post-treatment tumor recurrence and progression rates remain high, with failure rates as high as 40% (8-10). The gold standard of postoperative follow-up of TURBT is regular cystoscopy and urine cytology, but cystoscopy depends on subjective visible changes and the actual tumor recurrence, so it cannot early predict whether intravesical BCG therapy is effective. Urine cytology has high sensitivity for high-grade tumors and low sensitivity for low-grade tumors, and it is difficult to distinguish inflammatory responses from tumor recurrence, especially in patients receiving intravesical BCG perfusion (11-14).

Fluorescence in situ hybridization (FISH) uses fluorescent-labeled DNA probes to identify chromosomal aberrations associated with BCa, such as amplification on chromosomes 3, 7, and 17 and deletion of the 9p21 gene locus (15-17). It is more sensitive to urothelial carcinoma than urine cytology, and not affected by hematuria, urinary tract infection, and BCG induced inflammation (11). Genetic mutation can be identified at an early stage of cancer development and become an important indicator for clinical testing as cancer progresses (18,19). A recent update to the American Urological Association guidelines mentions that FISH tests can be used to assess response to BCG therapy in BCa, but the evidence is limited to expert opinion (5). Given that there is currently no definitive tool for early prediction of the efficacy of BCG therapy, we evaluated the predictive role of FISH for the efficacy of BCG perfusion in BCa. We present the following article in accordance with the TRIPOD reporting checklist (available at https://tcr.amegroups.com/article/view/10.21037/tcr-22-1367/rc).

The study was conducted in accordance with the Declaration of Helsinki (as revised in 2013). The study was approved by the Medical Ethics Committee of Tongji Hospital, Tongji Medical College, Huazhong University of Science and Technology (Approval No. TJ-IRB20210521) and individual consent for this retrospective analysis was waived. We extracted the relevant data of BCG perfusion patients from September 2015 to August 2020 from the urology treatment room, and a total of 348 patients were extracted. Then, the FISH-related information of these patients was retrospectively searched in the FISH detection database of the Institute of Urology of our hospital, and a total of 81 patients who had undergone FISH detection were screened. The electronic medical record system of our hospital was used to query the relevant clinical data of the patients, and 76 patients meeting the requirements were screened out (Figure 1). Inclusion criteria: (I) age over 18 years old; (II) postoperative pathologically confirmed bladder urothelial carcinoma; (III) regular BCG perfusion according to the process requirements; (IV) relevant clinical data can be queried in the electronic medical record system. 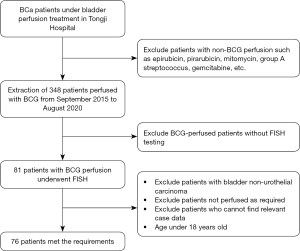 The primary endpoints of this study were recurrence and progression, as until the last follow-up, only two patients had died, one due to BCa and the other due to a sudden cerebrovascular accident. Recurrence was defined as any tumor found after bladder BCG perfusion (cystoscopy biopsy or postoperative pathology), regardless of grade or stage, but tumors found by secondary resection within 2~6 weeks were not counted, because it was impossible to determine whether the tumor was completely removed in the first operation. Progression was defined as an increase in non-invasive to invasive staging, or histological grade from low-grade malignant potential and low-grade to high-grade, or the occurrence of adjacent tissue and organ invasion and metastasis.

The specific results of urine FISH in 76 patients were obtained directly from the Institute of Urology in our hospital. The UroVysion kit used was provided by Beijing Jinpujia Medical Technology Co., Ltd. and consisted of two combinations of chromosome-specific centromeric probe (CSP)3 (green)/CSP7 (red) and gene locus-specific probe (GLP) p16 (red)/CSP17 (green). Since it was a retrospective study, the time interval of FISH detection was not fixed. However, FISH detection after BCG perfusion was performed after at least 6 perfusions. All patients with positive FISH after BCG perfusion were confirmed by cystoscopy at that time.

Dosage of BCG (Bisegi, Chengdu Institute of Biological Products Co., Ltd., China, S20123007) for therapeutic use: two doses (120 mg) each time, shaken with 40–50 mL saline, were introduced through catheter. Treatment course: once a week for 6 consecutive times, once every two weeks for 3 consecutive times, once a month for 10 consecutive times. The intravesical residence time of each perfusion was 2 hours, and four positions of supine, prone, left lateral and right lateral positions were exchanged.

SPSS 24.0 statistical software was used to analyze the data. Measurement data conforming to normal distribution were expressed as mean ± standard deviation, and t-test was used for comparison between groups. Measurement data that did not conform to normal distribution were expressed as median (M) and interquartile range (Q1, Q3), and nonparametric tests were used for comparison between groups. Counting data are expressed as percentages, and the χ2 test was used for comparison between groups. When the amount of data was limited, Fisher’s exact test was used. Logistic regression and Kaplan-Meier methods were used to evaluate the relationship between FISH results and tumor recurrence or progression. COX proportional hazards regression analysis was used to identify risk factors for recurrence or progression.

Demographic and clinical characteristics of the research objects 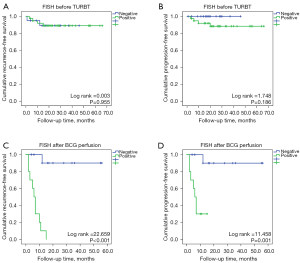 Multivariate analysis of recurrence of bladder cancer after BCG perfusion

There were 59 FISH tests before TURBT, and the positive rate was only 66.1% (39/59), which was significantly lower than the 87.18% sensitivity of FISH for urothelial carcinoma as shown by Hu et al. (23). This may be due to insufficient shedding of cancerous cells into the urine in some cases, or the inability of fluorescent probes to specifically recognize aberrant chromosomes. This is not surprising since chromosomes 1, 5, 8, and 11 are also associated with bladder cancer, but they do not belong to the group of FISH probes used in this study (24). In addition, due to the limitations of retrospective study, relatively few patients, some heterogeneity in the patient population, and not all patients underwent FISH testing before TURBT, these factors will reduce the sensitivity of FISH testing.

In addition to FISH, non-invasive follow-up monitoring of bladder cancer includes mini chromosome maintenance 5 (MCM5) urine expression (ADXBLADDER) (30), Bladder EpiCheck Test (31), mRNA-based urine test (Xpert Bladder Cancer Monitor) (32), etc. These new bladder cancer biomarkers can monitor the risk of tumor recurrence with better sensitivity than cytology. FISH also has some potential deficiencies. FISH is less sensitive to detect low-grade tumors, which may be explained by the fact that the chromosomes of low-grade tumors are usually diploid or nearly diploid, without obvious genetic abnormalities, and similar to normal cells. Secondly, the locus probe 9p21 has the smallest volume, and it is also the most common genetic abnormal locus, so it is not easy to observe.

As for the risk factors for bladder cancer recurrence, this study found that positive FISH after BCG perfusion, TNM stage, G3 and multiple tumors were closely related to tumor recurrence, which was consistent with the conclusion of Whitson et al. (33). These indicators (except positive FISH after BCG perfusion) are similarly described in the 2019 Chinese Urology and Andrology Guidelines (34).

Our study also had some limitations. First of all, this was a single-center retrospective study with a small sample size and no multi-center large data for mutual verification. Secondly, because the cost of FISH detection was more expensive than cystoscopy, the data of patients undergoing FISH detection after BCG perfusion was less and the detection time was very irregular, so it was impossible to perform stratified analysis according to the detection time of FISH. The follow-up time of some patients was short, and the observation endpoint event did not occur.

Funding: This work was supported by ().

Reporting Checklist: The authors have completed the TRIPOD reporting checklist. Available at https://tcr.amegroups.com/article/view/10.21037/tcr-22-1367/rc

Conflicts of Interest: All authors have completed the ICMJE uniform disclosure form (available at https://tcr.amegroups.com/article/view/10.21037/tcr-22-1367/coif). The authors have no conflicts of interest to declare.

Ethical Statement: The authors are accountable for all aspects of the work in ensuring that questions related to the accuracy or integrity of any part of the work are appropriately investigated and resolved. The study was conducted in accordance with the Declaration of Helsinki (as revised in 2013). The study was approved by the Medical Ethics Committee of Tongji Hospital, Tongji Medical College, Huazhong University of Science and Technology (Approval No. TJ-IRB20210521) and individual consent for this retrospective analysis was waived.