An estimated 600,000 new head and neck squamous cell carcinoma (HNSCC) cases are diagnosed annually worldwide, with a mortality rate of 40–50%. Recently, traditional risks such as excessive alcohol consumption and tobacco exposure have decreased, while the risk of human papilloma virus (HPV) infection has increased. HPV-positive oropharyngeal cancers, in particular, had a favorable clinical outcome (1). Therefore, it was essential for us to identify potential prognostic markers in HNSCC. HPV status should also be considered.

WASF2, also known as WAVE2 and SCAR2, is located on chromosome 1p36.11. The primary function of WASF family proteins was to regulate the actin cytoskeleton via the Arp2/3 complex and to drive membrane protrusion (2). In the WASF proteins family, WASF1 and WASF3 were restricted to brain tissues, whereas WASF2 was widely distributed in almost all tissues except for skeletal muscle cells (3). WASF2 was implicated in tumorigenesis and the development of several cancers, including pancreatic cancer (4), breast cancer (5) and lung adenocarcinoma (6). However, the clinical relevance of WASF2 in HNSCC has not yet been studied. WASF2 aberrant expression was mechanically mediated by microRNA, Rac and HSPC300 and others (7-9). In addition to the accumulation of genetic alterations, the epigenetic landscape also played a significant role in regulating the carcinogenesis of HNSCC (10). In addition, evasion of immune destruction was a crucial hallmark of cancer. Furthermore, immune checkpoint inhibitors have established a new milestone in the treatment of cancer (11,12). WASF2 was indeed required for T cell activation (13). Furthermore, DNA methylation inhibitors can boost the immunogenicity of tumor cells (14). Therefore, WASF2 DNA methylation may contribute to forming an immunosuppressive microenvironment.

In this study, the WASF2 level, WASF2 methylation level, and the relationship between WASF2 expression and methylation in HNSCC were analyzed comprehensively for the first time. We evaluated the prognostic value of WASF2, the methylation of the WASF2 promoter, and the association between WASF2 and clinicopathological features. We investigated further the dysregulated pathways and immune imbalance in hypermethylated WASF2 patients. We present the following article in accordance with the STREGA reporting checklist (available at https://tcr.amegroups.com/article/view/10.21037/tcr-22-1133/rc).

A user-friendly online database, TIMER (http://timer.cistrome.org/) provides dynamic analysis and visualization of immune infiltration levels via the TCGA database (16). WASF2 was plotted on Kaplan-Meier curves for HNSCC, HPV-positive HNSCC, and HPV-negative HNSCC. The threshold value for patients was 40%, and the follow-up time was 60 months. In addition, associations between WASF2 level and immune infiltrates in HNSCC, and HPV-positive HNSCC were investigated. In HNSCC and HPV-positive HNSCC, the correlation of WASF2 with specific immunocyte markers was also evaluated.

The TNMplot database (https://tnmplot.com/analysis/) is an integrated online database to analyze differential gene expression in tumor, normal and metastatic tissues (17). Using this database, the expression level of WASF2 in tumor tissues and adjacent normal tissues was compared in human cancers.

According to median value of WASF2 expression levels, 522 HNSCC patients were divided into low and high-expression groups in the TCGA database. The pathways associated with the differential WASF2 expression were subsequently analyzed using GSEA. 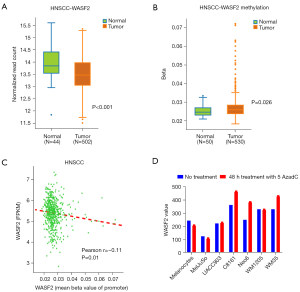 Prognostic value of WASF2 and WASF2 methylation in HNSCC

After investigating WASF2 transcriptional levels and WASF2 methylation levels in HNSCC, we investigated the prognostic value of WASF2 and WASF2 methylation in HNSCC. Through TIMER, the results revealed that HNSCC patients with higher levels of WASF2 had a longer overall survival (OS) time (HR=0.824, P=0.009, Figure 2A). We further investigated the prognosis of WASF2 in HPV-positive and HPV-negative HNSCC patients, given that HPV status is an important risk factor for developing HNSCC. We found that HPV-positive HNSCC patients with high-expressed WASF2 had a favorable OS time (HR=0.574, P=0.007, Figure 2B). Nevertheless, WASF2 was not a prognostic indicator in HPV-negative HNSCC patients (Figure 2C). Based on the PrognoScan database, we confirmed that enhanced WASF2 was associated with long OS time in HNSCC (Figure S3A). In addition, patients with higher levels of WASF2 had a longer OS time in breast cancer (Figure S3B), ESCC (Figure S3C), and KIRC (Figure S3D). However, patients with up-regulated WASF2 had a shorter OS in bladder carcinoma (BCA) (Figure S3E), liver hepatocellular carcinoma (Figure S3F), ovarian cancer (OV) (Figure S3G), and PDAD (Figure S3H). Moreover, up-regulated WASF2 was associated with a longer recurrence-free survival time (RFS) in KIRP (Figure S3I). In contrast, patients with elevated WASF2 had the worst RFS in liver hepatocellular carcinoma (Figure S3J), OV (Figure S1K), and PDAD (Figure S3L). 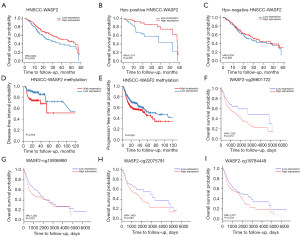 Association between WASF2 expression and clinicopathological characteristics in HNSCC patients 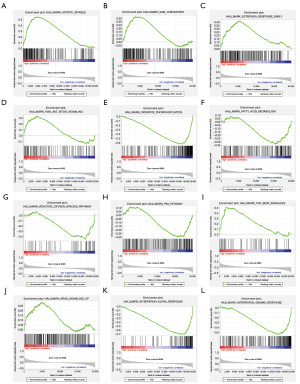 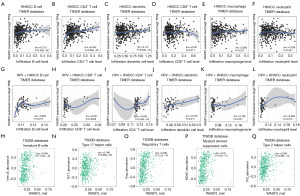 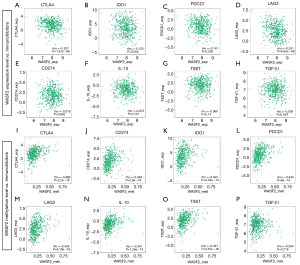 WASF2’s combination of expression and methylation has yet to be clarified. This study analyzed WASF2 expression and WASF2 methylation in HNSCC using online databases and bioinformatics data mining tools. WASF2 transcriptional levels were low in HNSCC and negatively correlated with WASF2 promoter methylation, according to our findings. According to the GEO database, the DNA methylation inhibitor 5AzadC increased transcriptional levels of WASF2. Patients with HNSCC and high WASF2 expression had a prolonged OS. Patients whose WASF2 promoters were more heavily methylated had a poor prognosis. Interestingly, HPV-positive HNSCC patients with high WASF2 expression had favorable prognosis compared with HPV-negative HNSCC patients. High-expressed WASF2 of HNSCC patients characterized by male, clinical stage IV, grade 2, and mutation burden had a longer OS. High levels of expressed WASF2 were associated with a longer RFS in HNSCC patients with clinical III stage. WASF2 was implicated in tumor procession and immune response, according to the results of GSEA. Thus, we examined the relationship between WASF2 and WASF2 methylation and the tumor immune microenvironment. WASF2 was generally positively correlated with tumor-killing immune cells, whereas WASF2 methylation was consistently positively associated with immunosuppressive cells. Strikingly, WASF2 had negative correlation with specific immunoinhibitory (CTLA-4, IDO1, PDCD1 and LAG3) while WASF2 methylation had positive correlation with specific immunoinhibitory (CTLA-4, CD274, IDO1, PDCD1, LAG3, IL-10 and TIGIT) in HNSCC. These findings suggested that hypermethylated WASF2 was a potential tumor-suppressor gene and that hypermethylated WASF2 could suppress tumor progression in HNSCC by regulating tumor growth and immune microenvironment balance.

WASF2 is required for tumor cell invasion and metastasis by regulating the actin cytoskeleton (8). WASF2 is widely expressed in gastric cancer (22), hepatocellular carcinoma (23) and pancreatic cancer (24). WASF2 consistently increased in liver cancer and pancreatic cancer while decreasing in HNSCC. In addition, miR-146a could inhibit WASF2 expression in gastric cancer, and WASF2 protein levels were negatively correlated with miR-146a levels (7). Similarly, we found WASF2 expression was negatively associated with WASF2 methylation levels in HNSCC. Owing to 5AzadC incorporation into DNA and inhibition of DNA methylation (25), it was confirmed that WASF2 methylation suppresses WASF2 expression.

The study found that PDAC patients with high-expressed WASF2 had significantly shorter OS times (26). Moreover, WASF2 was a poor prognostic indicator of hepatocellular carcinoma (23). In LIHC and PDAC, up-regulated WASF2 was consistently associated with a short OS and RFS. Patients with HNSCC who had more WASF2 had a longer OS time. Several gene-specific DNA methylation have been identified for diagnosis and prognosis in HNSCC (27). Herein, we found that patients with a hypermethylated WASF2 promoter had poor PFI. In HNSCC, we also identified four prognosis-associated CpG-islands of WASF2.

Mechanically, WASF2 was crucial for actin polymerization, which is essential for cell migration. WASF2-deficient mice could decrease sprouting and branching of endothelial cells during angiogenesis (28). In addition, WASF2 works in controlling epidermal shape and growth via Wnt/β-catenin signaling (29). A study discovered that WASF2 contributed to breast epithelial morphology and that knocking down WASF2 promoted the proliferation of late-stage acini and characterized a partial EMT-like phenotype (30). Similarly, we discovered that WASF2 was associated with cell proliferation-related pathways in HNSCC, including mitotic spindle assembly, G2/M checkpoints, and p53 pathway.

There existed broad differences in the tumor-infiltrating immune population of HPV-positive and HPV-negative HNSCC. In HPV-positive HNSCC, higher frequencies of infiltrating B cells and helper CD4+ T cells were observed (31). We discovered that HPV-positive HNSCC patients had a stronger correlation with B cells and CD4+ T cells than HNSCC patients. In addition, WASF2 was a critical component for T cell activation because it regulated actin cytoskeletal reorganization, intracellular calcium signaling, and NFκB activation (32). We discovered an intriguing correlation between WASF2 methylation levels, specific immunosuppressive cells, and immune checkpoints. In a mouse model of ovarian cancer, treatment with anti-PD-L1 and 5-AZAdC could increase infiltrating CD8+ T cells and Th1-type chemokine expression (33). In addition, WASF2 can maintain T cell homeostasis by inhibiting mTOR activation. A conditional WASF2 knockout in T cells could impair antigen-specific T cell response and result in severe autoimmunity (34). According to our findings, patients with hypermethylated WASF2 disrupted the intratumoral immune homeostasis in HNSCC and HPV-positive HNSCC. Our results were obtained by querying a database, which enables us to study gene function rapidly and efficiently and provides a potential direction for biological experiments. Future experiments are required to confirm the role of WASF2 in tumor promotion and immunomodulatory effects.

We determined the potential clinical relevance of WASF2 hypermethylation in HNSCC. GSEA results indicated that WASF2 was involved in tumor growth and the immune response. The correlation between WASF2 methylation and tumor microenvironment also sheds light on WASF2’s role as an immunomodulator in innate and adaptive immune responses. By accumulating its genetic alterations, methylation abnormalities, and immune microenvironment imbalance, we could demonstrate that WASF2 played a significant role in HNSCC.

We thank the uploaders of Bilibili website for selflessly sharing the bioinformation methods.

Reporting Checklist: The authors have completed the STREGA reporting checklist. Available at https://tcr.amegroups.com/article/view/10.21037/tcr-22-1133/rc

Conflicts of Interest: All authors have completed the ICMJE uniform disclosure form (available at https://tcr.amegroups.com/article/view/10.21037/tcr-22-1133/coif). The authors have no conflicts of interest to declare.