The association of serum folate and homocysteine on venous thromboembolism in patients with colorectal cancer: a cross-sectional study

Patients with colorectal cancer exhibit high serum homocysteine and low serum folate compared to the healthy population (9). A case-control study of colorectal cancer from New York University showed (10) that compared to the control group, serum folate was lower and serum homocysteine was higher in the case group. Homocysteine increases the production of reactive oxygen species, which form hydroxyl radicals that remove electrons from other molecules and induce subsequent oxidation of lipids, proteins, carbohydrates, and nucleic acids, leading to endothelial dysfunction and vascular wall damage, and eventually to platelet activation and thrombus formation (11-15).

Folic acid deficiency prevents the re-production of methionine, resulting in homocysteine accumulation in the body, and is a sensitive indicator of elevated homocysteine. As a link in the metabolic pathway of homocysteine methylation, approximately 50% of homocysteine is remethylated to form methionine, and folic acid completes the methyl cycle by providing methyl to homocysteine in the form of the coenzyme N-5-methyltetrahydrofolate catalyzed by vitamin B12-dependent enzymes and methionine synthase (16). In a case-control study of venous thromboembolism, plasma homocysteine concentrations were significantly different between the two groups and there was also a strong concentration-dependent association between folic acid and the risk of venous thromboembolism (17). However, whether venous thrombosis is the result of a direct effect of folic acid or the presence of a homocysteine-mediated mediating effect cannot be determined.

Data were obtained from colorectal cancer patients admitted to the Department of Gastrointestinal Surgery of the First Hospital of Shanxi Medical University. The inclusion criteria were as follows: (I) age ≥18 years; (II) complete clinical history; (III) confirmed diagnosis of colorectal cancer on admission; (IV) diagnosis of venous thromboembolism on admission; and (V) no major surgery in the last 3 months of admission. The exclusion criteria were as follows: (I) patients with diseases related to abnormal coagulation function; (II) those taking anticoagulant drugs for a prolonged period; and (III) patients who had undergone chemotherapy.

A retrospective cross-sectional study was conducted using a highly trained investigator who reviewed the patients’ medical records. The survey period was from May 2020 to May 2022. A total of 613 people were included in the study population, 377 were excluded, including 334 without folic acid or homocysteine indicators, 34 without venous thromboembolism diagnosis on admission, 4 with coagulation-related disorders, and 5 with chemotherapy. The general data collection included the following: gender, age, occupation, and family history of cancer. The patients’ medical records were also collected, including the primary tumour location, tumour American Joint Committee on Cancer (AJCC) stage, tumour metastasis, combined with venous thromboembolism at 24 hours of admission (venous thromboembolism was confirmed by colour Doppler ultrasonography), combined with other chronic diseases (hypertension, hyperlipidaemia, cardiovascular disease, diabetes, anaemia, malnutrition), and nutrition-related information [nutrition risk screening-2002 (NRS-2002), body mass index (BMI)]. The following laboratory blood indicators were examined: serum folate, serum homocysteine, D-dimer, prothrombin time, activated partial thromboplastin time, thrombin time, prothrombin time activity, international standard ratio of prothrombin time, haemoglobin, platelet count, red blood cell count, white blood cell count, total protein, and albumin. Subject operating characteristic curves for the laboratory blood markers of patients at admission were plotted to determine the optimal cut-off values, which were used for grouping. The study was conducted in accordance with the Declaration of Helsinki (as revised in 2013). The study was approved by ethics committee of First Hospital of Shanxi Medical University (No. SK014), and informed consent was taken from all the patients.

IBM SPSS Statistics software (version 26.0) was used for data collation and statistical analysis. The χ2 test was used for one-way analysis and unconditional logistic regression was applied for multi-way analysis. The bias-corrected percentile Bootstrap method was used to test for mediating effects (1,000 replicate samples) and the mediation function of R 4.1.2 was employed to estimate the direct effect (ADE), indirect effect (ACME), and total effect (Total Effect). The test level was set to α=0.05, and the test was two-sided. The unconditional logistics regression model was used to assess the odds ratio (OR) and 95% confidence interval (CI) for folic acid to homocysteine in patients with and without venous thromboembolic colorectal cancer. 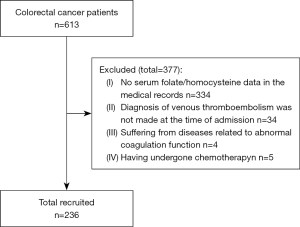 This was is a single-center study and there are limitations in terms of the representativeness of the population. Also, the possible role of vitamin B12 as a coenzyme of the homocysteine metabolic pathway in modulating the mediating effect was not addressed in this study. In future studies, the relationship between serum folate and homocysteine and preoperative/postoperative venous thromboembolism in patients with colorectal cancer will be further investigated in a large multicenter sample.

Funding: The study was supported by ().

Reporting Checklist: The authors have completed the STROBE reporting checklist. Available at https://tcr.amegroups.com/article/view/10.21037/tcr-22-2839/rc

Conflicts of Interest: All authors have completed the ICMJE uniform disclosure form (available at https://tcr.amegroups.com/article/view/10.21037/tcr-22-2839/coif). The authors have no conflicts of interest to declare.

Ethical Statement: The authors are accountable for all aspects of the work in ensuring that questions related to the accuracy or integrity of any part of the work are appropriately investigated and resolved. The study was conducted in accordance with the Declaration of Helsinki (as revised in 2013). The study was approved by ethics committee of First Hospital of Shanxi Medical University (No. SK014), and informed consent was taken from all the patients.