Liver metastases are a common occurrence for metastatic disease from many primary sites with estimates that 40-50% of all malignancies are complicated by liver metastases (1). Colorectal cancer is one of the most common solid malignancies to metastasize to the liver with approximately 20% of the estimated 150,000 patients diagnosed yearly in the United States with liver involvement at presentation and up to an additional 60% who develop liver metastases (2,3). Aggressive treatment of liver metastases may prolong survival in certain scenarios. Hepatic resection of liver metastases from colorectal cancer has become an accepted standard therapy for patients deemed operable with reported 5-year survival of 50-60% in selected series (3-8). The benefit of local therapy in non-colorectal liver metastases is less defined, but long-term survival has been reported after liver metastases resection from sarcoma, breast cancer, and other primary sites (9). Local control of hepatic metastases appears to be a major determinant of overall survival. However, 80-90% of patients are either patients with lesions that are surgically not resectable or are medically inoperable patients at the time of diagnosis (10). Therefore, there is an important role for a treatment that can provide the equivalent of tumor resection with minimal morbidity.

Stereotactic body radiotherapy (SBRT) delivers an ablative regimen of highly focused external beam radiotherapy that targets one or more discrete extracranial lesions. Published reports using SBRT to treat liver metastases have shown actuarial local control rates ranging from 50-100% with higher doses associated with better local control (11-18). Studies to date have been small but encouraging with the best results thus far showing no local failures at 2 years after 60 Gy in 5 fractions (13). A multi-institutional phase I/II study of SBRT for liver metastases showed the safety of dose escalation from 36 Gy up to 60 Gy in 3 fractions with a 2 year actuarial in-field local control rates of 92% (11). Lesions smaller than 3 cm had a 100% local control at 2 years. Although liver metastases from primary colorectal cancer represents the largest group treated with SBRT, many studies report a broad variety of tumor types treated with this technique with no apparent difference in local control.

Toxicities reported from these studies have been limited, and no acute SBRT-related deaths have been reported in studies reviewed. In a study of 141 lesions in the setting of metastatic colorectal cancer, there was a death from liver failure in a patient receiving >10 Gy to 60% of the liver (median 14.4 Gy) and a colon perforation warranting surgery (17). Given the 20-30 times higher incidence of liver metastases compared to primary liver cancer and the high likelihood of repeat treatments given the natural history of metastatic disease, proton therapy shows promise since it allows for similar tumor dose coverage for adequate local control while simultaneously limiting dose to critical normal structures including the normal liver parenchyma (1-3).

Proton therapy offers distinct dosimetric advantages in comparison to photon radiotherapy. The depth dose characteristics of proton and photon beams are qualitatively different. Due to physical laws, photons are absorbed exponentially in a specific tissue whereas protons exhibit a finite range depending on the initial proton energy. The energy of a proton beam is attenuated via coulombic interactions with electrons as it traverses tissue. The energy loss of a proton beam per unit path length is small until the end of the beam range. Towards the end of the proton range the remaining energy is lost over a very short distance and the beam itself comes to rest. This results in a characteristic steep rise in the dose absorbed by the tissue, known as the “Bragg peak”. The low-dose region located between the Bragg peak and the entrance of an unmodulated beam is called the “plateau”, with its dose being approximately 30% to 40% of the maximum dose.

The Bragg peak is narrow in nature. This presents a problem when irradiating wider targets. To overcome this, clinical proton beams are modulated to extend the length of the Bragg peak. Several beams of similar energy are closely spaced and superimposed to create a region of uniform dose over length of the target. These extended regions are called “spread-out Bragg peaks.”

The rationale for stereotactic body proton therapy for liver metastases

The above mentioned physical characteristics of proton beams confer significant dosimetric advantages as compared to photon radiotherapy. The extent of scatter which accounts for lateral penumbra of the beam is less in proton beams than photon beams for typical treatment depths and beam energies. The dose delivered to tissues by a proton beam rises to a maximum value at a specified depth and then falls off exponentially to no dose once the Bragg peak depth has been reached. This dosimetric advantage can be seen for each individual beam in a proton radiation treatment plan. This permits improvements in dose conformity and sparing of normal organs around the liver including the remaining uninvolved liver, heart, spinal cord, kidneys, bowel, and stomach.

In addition to improved dose conformity, proton radiotherapy delivers lower integral dose to tissue when compared to photon radiotherapy. Modern photon therapy techniques such as intensity-modulated radiation therapy (IMRT) may achieve prescription conformity similar to that of a proton treatment plan, but the amount of dose scattered to the remainder of the liver is still higher due to the spreading out of the low dose volume seen with IMRT. There is evidence that normal liver function is significantly correlated to the percentage of normal liver that is not irradiated (19). This decreased integral dose to normal liver is more critical in patients with hepatocellular carcinoma who tend to have underlying cirrhosis, but may be clinically significant in patients with liver metastases particularly in patients with prior partial hepatectomy. Reduction of integral dose to remaining liver may help preserve liver function, decrease the risk of secondary malignancies, and also allow for future retreatment of the liver.

The unique physical properties of proton beams present challenges not seen in photon based radiotherapy. Unlike photon beams, a distal beam edge must be defined for a proton beam. Since the majority of a proton beam’s dose is delivered at the end of its range at the Bragg peak it is critical to accurately delineate where the beam stops. Compensators in the treatment gantry allow the physician to control the location of the proton beam’s distal edge. A “smearing algorithm” is then applied to ensure dose coverage along the entire extent of the target region. However, due to variations in daily patient setup and internal organ motion, a certain amount of normal tissue beyond the distal extent of the target will receive some dose of radiation.

At some institutions, 4-dimensional CT treatment planning is utilized which takes into account the patient’s free breathing. Other institutions apply a respiratory gating technique which maps a sinusoidal pattern of the patient’s respiratory motion. The beam is then synced and turned during the same phase of each breathing cycle. At Loma Linda University, we employ a voluntary deep inspiration breath hold technique (SDX inc.) when treating liver lesions where the patient can independently monitor his/her breathing pattern and reproduce the effective breath hold using a spirometer and audio/visual feedback. Image acquisition during the portal venous and arterial enhancement phases may show differences in tumor and normal tissue attenuation. Thus, it is essential for each institution to develop a scanning protocol that allows for optimal target delineation.

Variation in daily patient set-up and target motion is a challenge encountered in photon radiotherapy as well. But range uncertainty is a unique problem encountered by proton radiotherapy. Variable beam attenuation can occur when the proton beam traverses tissues of different density along its path. A proton beam deposits nearly all its energy within the tissue with very little exit dose. These range uncertainties stem from artifacts in computed tomography (CT) scans and errors in converting CT Hounsfield units into proton stopping power. Additional errors occur due to changes in organ motion during normal respiration or variations in daily set-up. For example, a high-density rib adjacent to air-filled lung moving into and out of the beam path during normal respiration creates uncertainty in the beam path. A similar phenomenon may be seen if the beam traverses loops of bowel which shift position each day. Ultimately, this range uncertainty may result in areas of target and normal tissues unexpectedly being overdosed or underdosed. Because of the unpredictability of the relative biological effectiveness at the distal edge and the aforementioned issue of range uncertainty, beam arrangements are often selected so that they do not stop directly in front of critical organs or structures.

From a dosimetric standpoint, liver tumors have a benefit of being located within a relatively homogenous liver organ. There is less variable density within the liver itself. However, dose conformality may be restricted if the beam angle selection is confined to a path that travels entirely through liver tissue. Doing so may also increase the integral dose delivered to the normal liver since the beam is traversing more normal liver tissue and the proximal extent of the beam is often less conformal than the distal extent.

Several treatment planning comparison studies have been reported showing improved normal tissue dosimetry of proton based stereotactic body radiotherapy compared to photon based stereotactic body radiotherapy in the treatment of liver, lung and adrenal lesions (20-23). However, only one study compared these techniques in the treatment of liver tumors reporting a treatment planning comparison on 10 patients with solitary liver metastasis treated with multi-field SBRT that were re-planned with IMRT and proton pencil beam scanning techniques (20). The spared liver volume for the proton based plan was significantly higher compared to IMRT in all 10 patients and the mean liver dose was lower with the proton based plans (median 9.1 vs. 20.0 Gy; P<0.005).

There have been no reported outcomes using stereotactic body proton therapy yet, but protons have been used to treat hepatocellular carcinoma using various hypofractionated regimens (24-27). The largest reported prospective phase II study using proton radiotherapy for hepatocellular carcinoma (HCC) was done here at Loma Linda University Medical Center. Between 1998 and 2006, 76 patients with HCC were treated with proton radiotherapy with minimal acute toxicity, no reported radiation induced liver disease, and 3-year progression-free survival of 60% (26). Although all patients had cirrhosis, there were no reported dose limiting toxicity using doses of 63 Gray Equivalents (GyE) in 15 fractions showing the safety of such a treatment modality when normal tissue constraints are met.

At the time of this review, there are 2 active prospective clinical trials for proton based stereotactic body radiotherapy for liver metastases (28,29). Massachusetts General Hospital is conducting a non-randomized phase II trial comparing proton based and photon based stereotactic body radiotherapy techniques with individualized dose determined by size and location of tumor(s) given over 2-3 fractions (28). Here at Loma Linda University, we are conducting a phase I study to determine the feasibility and safety of stereotactic body proton therapy in patients with liver metastases followed by a phase II study to determine the efficacy of such treatment on local control (29). Patients will receive 3 fractions of SBPT starting at 12 GyE/fraction (total, 36 GyE), increased by 4 GyE/fraction for each subsequent dose group to 20 GyE/fraction (total, 60 GyE) according to standard phase I design. Treatment plans from first 2 patients on protocol on dose level 1 show high dose conformity to target with limited dose to nearby organs at risk (Figures 1,2). The phase II portion of the study will evaluate local control at 2 years with the maximally tolerated dose from the phase I portion. 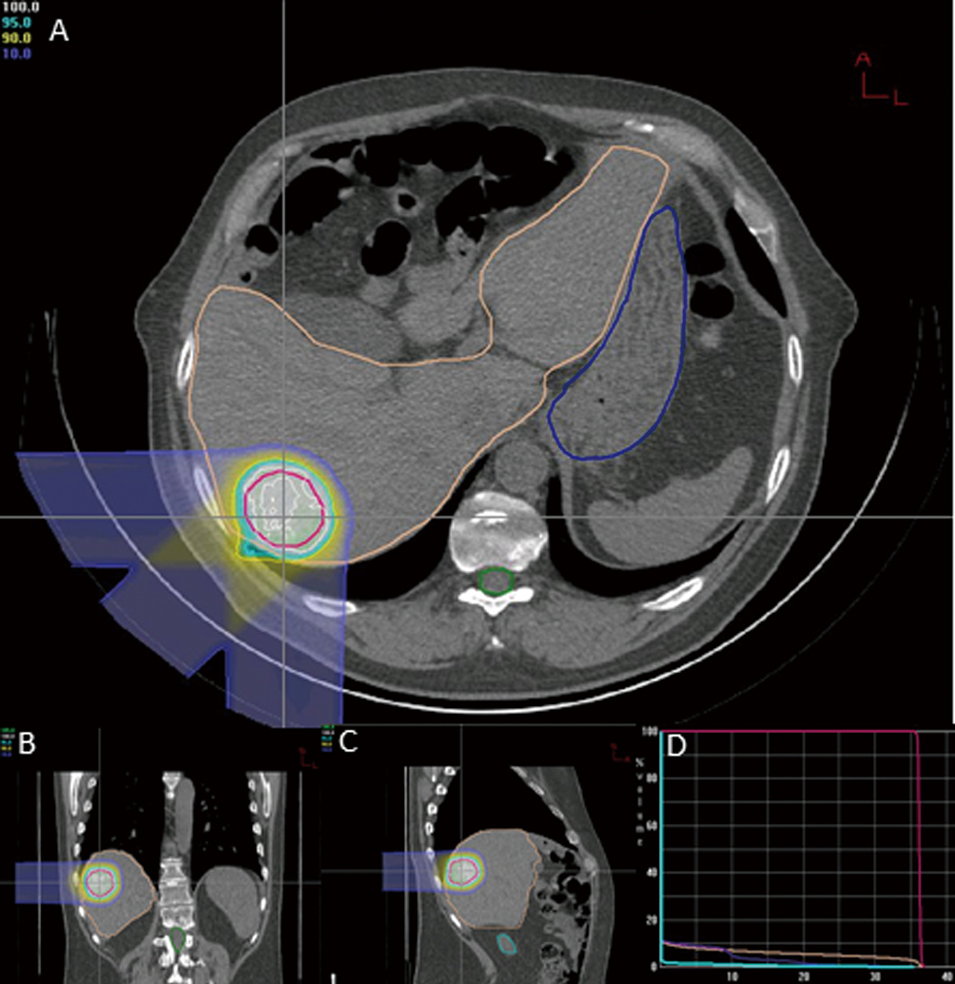 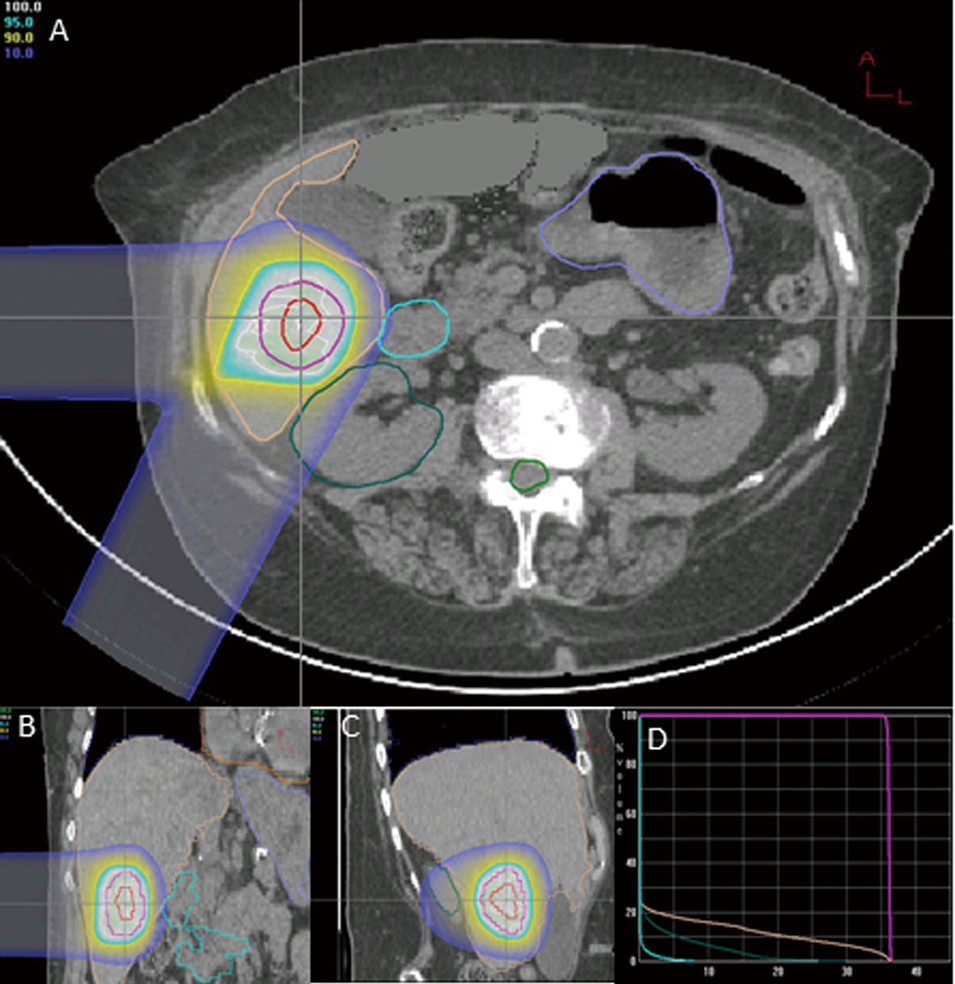 In patients with metastatic liver disease, aggressive local therapy using modern radiotherapy techniques are promising and project to have a substantial role in the treatment of unresectable liver metastases. The dosimetric advantage of proton therapy may lead to improved clinical outcomes with less morbidity. As yet, there are no clinical data to confirm this assertion. Reports from current clinical trials and experiences from other proton centers are eagerly anticipated.