Moving molecular subtypes to the clinic in gastric cancer

Adenocarcinomas of the stomach and gastroesophageal junction account for a high proportion of worldwide cancer-related mortality. Some progress has been made with the approval of HER2 and VEGFR2 targeted therapies, though the overall prognosis remains poor in metastatic disease with median overall survivals of 12−16 months (1,2). With the well-established understanding that cancer is a disease process owing to the unfettered growth of cells that stems from acquired somatic or germline DNA alterations, multiple investigators have queried the genome to gain insights into novel therapies.

Recently, gastric cancer has been put under the genetoscope and distinct molecularly-defined subtypes have emerged (3-7). Prior to molecular classification gastric cancer has largely been characterized by anatomic location and histologic subtype according to Lauren and WHO classification schema (8,9). While histopathologic analyses have observed differing features and prognoses between diffuse and intestinal type gastric adenocarcinomas, genomic data adds detailed information about underlying operative mutational processes and highlights recurrent changes with therapeutic implications.

In the article by Li et al., published in the April 1, 2016 issue of Cancer Research, the authors conduct an in depth analysis of genomic level data pooled from five large sequencing studies to establish a study set of 544 annotated gastric cancer specimens (10). Using aggregated genomic data, the authors sought to increase sensitivity to identify additional recurrently altered genes in gastric cancer and continue to refine the molecular landscape.

Getting from types to treatment

Results of molecular classification schema are influenced by input data type and sample size, with estimates that 600 samples per anatomic tumor type are needed for complete characterization (11). Combining genomic data from five previously published datasets Li and colleagues identified six previously unreported significantly mutated genes (SMGs) in regular mutated (RM) gastric cancer (3,5-7,10,12) (Table 1). Consistent with global incidence patterns well over half of the input data were derived from Asian patients (Table 1) (13). To pursue an initial classification scheme, the authors subdivided out 455 RM tumors with a mutation burden averaging around 2.4 mutations per megabase (Mb) pair from 89 hypermutated (HM) tumors with an average of 20.5 mutations/Mb. The classification of tumors into regular and HM signatures led to the observation of mutations at the TpCpW DNA motif (W = A or T; mutated nucleotide underlined) predominating in regular versus HM gastric cancers. Mutations at this motif are typical of the APOBEC cytidine deaminase signature and the authors found a positive correlation with APOBEC3B mRNA levels and TpCpW mutations in the RM subset though not in the HM cancers (14). High levels of microsatellite instability (MSI-H) are found in the HM cohort by Li et al., and define microsatellite instable (MSI) in both the The Cancer Genome Atlas (TCGA) and Asian Cancer Research Group (ACRG) subgroups; however, there is significant variation in mutation count (mutations/DNA Mb) among the non-MSI groups (3,4). Mutations per DNA Mb has been correlated with response to immune checkpoint inhibitors in several tumor types, providing clinical relevance to mutation burden as a gastric cancer stratification factor (15,16). 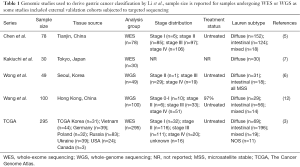 Interestingly, ERBB2 mutations were found in 3.2% of RM gastric cases from the pooled data, largely consistent with individual prior reports, such as the ACRG in which an ERBB2 mutation rate of 2.8% was reported in microsatellite stable (MSS) tumors (Table 2) (3,4). Of note, the ACRG study also included the 49 patients published by Wong et al. that formed part of the present analysis by Li et al. Owing to chosen methodological approaches by Li and colleagues the therapeutically important rates of ERBB2 amplification are not described. As both TCGA and ACRG included array based somatic copy number analysis, ERBB2 alterations highlight a possible weakness in the study by Li et al., as whole exome sequencing (WES) may not robustly detect gene copy number alterations without specialized computational algorithms. Table 2 highlights the distribution of key genes in gastric cancer across the reported molecular subgroups. 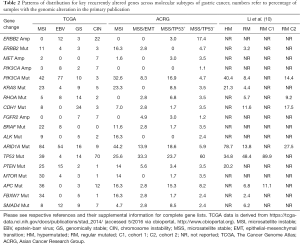 Table 2 Patterns of distribution for key recurrently altered genes across molecular subtypes of gastric cancer, numbers refer to percentage of samples with the genomic alteration in the primary publication
Full table

The confirmation that CDH1 mutations confer a poor prognosis in diffuse type gastric cancer supports the methodology used by Li and colleagues. The mutation rate of 11.6% identified in the combined genomic analysis is consistent with ranges reported by prior studies, though another large series noted the poor prognosis was associated with both intestinal and diffuse subtypes (19). Differing methodological approaches likely account for differing genomic frequencies of CDH1 alterations across gastric cancer studies. Along similar lines the large dataset utilized by Li et al. allowed for employing an unsupervised clustering method to yield separation of RM gastric cancer into two cohorts with differing prognoses. The investigators noted that cohort 1 (C1) showed overlap with TCGA chromosome instability (CIN) subtype while cohort 2 (C2) was evenly distributed among CIN and genomically stable (GS) subtypes and C1 was associated with a longer median survival (roughly 40 months vs. not reached) (10). The study noted that eight differential SMGs (TP53, CDH1, ARID1A, PIK3CA, XIRP2, APC, ERBB2, and RHOA) could retain the prognostic significance of the larger SMG list used to characterize C1 and C2 regular-mutated gastric cancer. Notably, this does differ somewhat from the isolated ACRG study that reported MSS tumors with intact p53 activity (MSS/TP53+) exhibited better survival than MSS tumors with loss of p53 function due to mutation (MSS/TP53−) (4). The ACRG study further classified a MSS/epithelial-to-mesenchymal transition (EMT) subgroup which exhibited the worst survival and contained a relatively high proportion of ARID1A mutations. Though the MSS/EMT subgroup was predominantly composed of Lauren classification diffuse subtype histology with peritoneal spread as the most common pattern of recurrence, CDH1 and RHOA mutations were surprisingly rare preferentially clustering in the MSS/TP53+ group consistent with the C2 classification. Li and colleagues should be commended on their use of large pooled genomic datasets, but the clinical utility of their classification schema requires further prospective study.

The importance of using genomic data to refine tumor classification is well recognized and pioneered by multiple TCGA studies and pan-cancer analyses (20,21). However, establishing and understanding genomically-defined prognostic subgroups has not yet reliably translated to improved patient outcomes in gastric cancer, as these are inherent tumor features not readily modified. We are not aware of prospective therapeutic studies in which molecular subtype (by TCGA or other) has guided treatment in gastric cancer. Several ongoing trials, particularly with immune-mediated therapies, may clarify the predictive ability of mutational signatures in gastric cancer. In a recent prospective trial of the anti-PD-L1 antibody atezolizumab, higher mutational burden was predictive of benefit from treatment in advanced bladder cancer, helping to validate molecular subgroups as predictive biomarkers (22). Significant work is needed before we can confidently say that immune mediated therapies could/should be restricted based on genomic subtype. Interestingly, computational approaches have suggested that a mutational burden of 10 mutations/Mb may be predictive of tumors more likely to harbor malignancy-associated neoantigens, closely paralleling the TCGA cutoffs (11.4 mutations/Mb) and 8.3 mutations/Mb used to separate HM and non-HM gastric cancers by Li and colleagues (3,10,23).

An interesting observation in the study by Li et al. is the breakdown of PIK3CA hotspot alterations by regular and HM gastric cancer. RM gastric cancer showed significant enrichment in helical domain mutations (E542K and E545K) whereas HM tumors contained catalytic domain H1047R alterations (4,10). If APOBEC-mediated processes are the main operative method in RM gastric, and defective DNA proofreading and repair dominate HM tumors, then this observation may have larger implications. How, at the fundamental molecular level, mutagenic exposures select for one activating kinase alteration over another is not well understood and begs further investigation in gastric cancer. The distribution of key genes, several with immediate therapeutic implications, across gastric cancer subtypes are yet to be fully exploited (Table 2). In a smaller series of breast and gynecologic malignancies, the H1047R PIK3CA alteration was associated with a numerically higher response to PI3K pathway inhibitors than non-H1047R PIK3CA mutations, suggesting possible clinical implications for the observation by Li and colleagues (24).

Where should ongoing genomic and clinical studies in gastric cancer go from here to capitalize on refined molecular classification? The development of model systems (patient derived cell lines, etc.) representative of each genomic subtype will be important to functionally validate alterations described by Li and others. For example, do ERBB2 amplified MSS/TP53− and MSS/TP53+ gastric cancer subtypes have similar response rates to trastuzumab, or do the genomic context and concurrent alterations modify the efficacy? As the data from Li et al. is drawn predominantly from untreated tumors, the direct applicability of this genomic landscape to treatment-refractory metastatic patients is difficult to discern, and research utilizing samples from more stage IV patients, particularly those with prior therapy (chemotherapy, immunotherapy, radiotherapy, and targeted therapy) may add additional information about possible subtype transformation. Studies relying primarily on genomic data by definition offer only a summative and static view of tumors and we anticipate incorporation of more fluid and functional assays will be needed to realize and optimize the use of genomic data (25). More clinical trials stratified based on molecular classifications should be designed to test the anti-tumor efficacy (i.e., mesenchymal vs. non-mesenchymal) to maximize the treatment response for specific target drugs.

The interesting question of whether similar classification schemas can be derived or recapitulated using commercially available hybrid capture based next-generation sequencing assays remains to be determined. Many of these tests incorporate whole exon coverage of 200−400 cancer-associated genes, representing 1−2 Mb of the human genome (3 Gigabases), and have established utility in gastric cancer (26). With improving technological advances, collaborative big data effort, and refined classifications as described by Li et al. we hope our patients will reap the ultimate benefit from these research endeavors.

Conflicts of Interest: J Chao has received research support from Merck & Co. SJ Klempner has received honoraria from Foundation Medicine, Inc. J Lee has no conflicts of interest to declare.

Disclaimer: The content is solely the responsibility of the authors and does not necessarily represent the official views of the National Institutes of Health.