Gut microbiota is co-evolving with their mammalian hosts for over 15 million years in a mutual symbiotic relationship. While the cellular and molecular mechanisms are currently unknown, they rise to the occasion in adapting to each other’s requirements in a fascinating way. For example, during the third trimester of pregnancy, gut microbiota undergoes a complete makeover to produce more fats by increasing Proteobacteria and Actinobacteria to support the growing baby and pregnant mother (1). The critical nature of gut microbiota is now highly appreciated in development and maintenance of immune, neural, vascular as well as in metabolic systems of the host. Microbiota is considered as a special evolving organ within humans. Several genetic and external factors such as mutations, inflammation, infections, diet, antibiotics are known to affect the dynamics of microbial communities in the intestine and play a critical role in modulating both innate and adaptive immune systems. Several efforts have been made and others are currently underway to define complex microbiota-host interactions (good vs. bad; cause vs. consequence) using animal models. More importantly, it is becoming clear that excessive usage of antibiotics at every stage of human life might have tremendously contributed to the increased metabolic disorders in human populations.

While microbes directly affect the development of immune system, many of the beneficial/pathogenic effects are believed to be mediated by microbial metabolites (produced by gut bacteria from dietary factors). Most of the microbial metabolites are small molecules and the circulating concentrations of these in humans’ ranges from micromolar to millimolar concentrations. At these concentrations, they often exhibit severe toxicity or anti-proliferative effects on various cell types. Interestingly, the host system often curtails adverse activities of metabolites despite the fact that they were produced in micromolar circulating concentrations. Thus, investigating the mechanisms adopted by the host intestinal system to utilize these metabolites is of great interest.

A recent study by Kaiko et al. (2) addressed this issue by utilizing several in vitro and in vivo models. The overall hypothesis of this study is that the crypt structures protect the stem/progenitor cells from soluble microbiota-derived signals present in the intestinal lumen. First, they tested the anti-proliferative effects of 96 microbial metabolites on rapidly dividing Lgr5+ stem/progenitor cells. These cells were prepared by enriching colon epithelial cells isolated from Cdc25A-click beetle red luciferase reporter mice. They identified the classic microbial metabolite, butyrate, as a prominent inhibitor of intestinal stem/progenitor cells proliferation. Butyrate is a bacterial starch fermented dietary short chain fatty acid and is majorly produced by some Gram-positive anaerobic bacteria in the gut. The concentration of butyrate can be reached up to millimolar concentration in the gut lumen i.e., ~5 mM in mouse and ~70 mM in humans. The anti-proliferative activities on stem/progenitor cells contradict the previous reports where butyrate has been well established as a beneficial metabolite. For example, Furusawa et al. (3) and Arpaia et al. (4) demonstrated that butyrate promotes the anti-inflammatory peripheral regulatory T-cell generation. Most importantly, in these studies, they reported that butyrate upregulated the histone H3 acetylation of the FoxP3 promoter region and as well as at intronic enhancer conserved non-coding sequence 1 (CNS1) and CNS2 regions. In the similar context, Medzhitov’s group demonstrated that butyrate regulates intestinal macrophage function by inhibiting histone deacetylase (HDAC) establishing butyrate anti-inflammatory activities (5).

Kaiko et al. (2) started with the hypothesis that crypt structures protect the intestinal stem/progenitor from butyrate anti-proliferative activity. This group suspected that morphology of crypt evolved not merely to enhance nutrient absorption, but to protect the pool of stem/progenitor cells from harmful metabolites. To provide proof of concept, they utilized zebrafish model, which lacks the crypt structures in its intestine. Importantly, the zebrafish also does not harbor the butyrate-producing bacteria. Exposure of butyrate to zebrafish significantly suppressed the epithelial cell proliferation within the intestinal bulge. These studies provided proof of concept that crypt structures potentially evolved to prevent the anti-proliferative activities of butyrate (other adverse effects of microbial metabolites) in higher organisms. To address the critical protective role of crypts in higher organisms, they have utilized two independent methods to eliminate crypt structures in mouse models. First, they have treated mice with dextran sodium sulphate (DSS) in which integrity of crypts are destroyed and secondly, they physically injured the intestinal lining with biopsy forceps to remove 1 mm2 fragments of the colonic mucosa. In both models, they observed significant suppressive effects of exogenous butyrate on the proliferation of epithelial stem/progenitor cells in crypts adjacent to wounded areas. Interestingly, when they depleted the bacteria responsible for butyrate production, they observed decreased ulcer size in DSS-treated mice and could reverse this effect by providing butyrate or fecal transplant containing butyrate-producing bacteria. Overall, Kaiko et al. demonstrated that crypt structures prevent the butyrate anti-proliferative activities on colonic stem/progenitor cells those reside at the base of the crypts.

Next, Kaiko et al. (2) asked whether the protection is based on diffusion (reaching from the surface to base of crypt) or butyrate is further metabolized by epithelial cells at the top of crypt structures. To examine the metabolic capacity of surface colonocytes (highly differentiated), they developed in vitro cell culture system of differentiated colonocytes from colonic stem cells. These cells consumed around 30% butyrate, when grown in the presence of externally added butyrate and the supernatants significantly reduced the anti-proliferative activity on stem/progenitor cells suggesting colonocytes indeed utilize the butyrate to protect stem cells. Further, they demonstrated that butyrate, but not other SCFAs (propionate, acetate) is metabolized by colonocytes (but not by stem cells) as a substrate for oxidative phosphorylation (OXPHOS) for their energy source. The metabolism of butyrate by colonocytes was examined in mouse models utilizing mice deficient in acyl CoA dehydrogenases (ACADs). ACADs are key enzymes that convert butyrate to acetyl-CoA and highly expressed in colonocytes. ACADs−/− mice displayed decreased stem/progenitor cell proliferation compared to wild type. Exogenous exposure of butyrate further reduced stem/progenitor cell proliferation. Interestingly, when ACADs−/− mice are treated with DSS, significantly reduced stem cell proliferation with or without exposure of butyrate was observed. Overall, these studies highlight that butyrate oxidation pathway in colonocytes was required to limit exposure of stem/progenitor cells to luminal butyrate. These results highlight how intricately co-evolved host and microbiota to full fill their energy requirements and protect critical cells at the same time. As demonstrated colonocytes highly expressed the butyrate metabolizing enzymes compared to other metabolic enzymes involved in SCFA utilization, which do not show anti-proliferative activities on stem cells. The differentiated colonocytes reduce the exclusively metabolizes for their energy source and at same time protect from suppression of stem cells.

In this study, authors also investigated the mechanisms responsible for butyrate induced anti-proliferative activities on colonic stem/progenitor cells. They identified that butyrate significantly inhibited HDAC activities by increasing acetylation in stem/progenitor cells at both the histone H3K27 and H3K9 sites. The HDAC inhibitors (trichostatin A) reversed the phenotype suggesting anti-proliferative activities of butyrate are mediated through HDACs. Further, they explored to identify the transcription factors are responsible for its actions through genome-wide chromatin immunoprecipitation sequencing (ChIP-seq) and formaldehyde-assisted isolation of regulatory elements sequencing (FAIRE-seq) of butyrate-treated colonic stem/progenitor cells. They focused on the transcription factors that regulate cell-cycle. Their analysis identified that butyrate regulates Foxo1 and Foxo3 transcription factors as highly predicted candidates. They confirmed these observations by utilizing pharmacologic and genetic inhibition of Foxo1 and Foxo3 activity, where they report that activation of Foxo3 is the critical for butyrate anti-proliferative activity. In summary, they demonstrated that butyrate acts on stem/progenitor cells to acetylate histones and induces a Foxo3-dependent suppression of proliferation as the negative cell-cycle regulator (Figure 1). 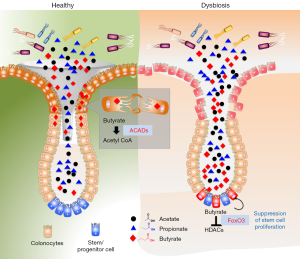 Figure 1 Crypts protect stem/progenitor cells from microbial metabolite butyrate anti-proliferative activities. The model representing the colon crypt epithelial cells act as natural filters for channeling the microbial metabolite butyrate. In healthy colonic environment, epithelial cells from the top of crypts metabolize specifically butyrate (but not acetate, propionate) through Acyl-CoA Dehydrogenase (ACADs) leading to reduced levels of butyrate at the bottom of crypt. Decreased levels of butyrate do not display its anti-proliferative activities on residing stem/progenitor cells at the bottom of crypt. The colonic injury or dysbiosis condition (absence of crypts) leads to uncontrolled exposure of metabolites consisting of butyrate suppress the proliferation of stem/progenitor cells through blocking activities of histone deacetylases (HDACs).

The current study while explaining some of the basic understanding of crypt biological activities raises some interesting questions. Several studies reported the beneficial effects of butyrate in ulcerative colitis patients through its anti-inflammatory activities. However, the level of protective effects potentially depends on the extent of damage of crypts. The results point to that the presence of butyrate at the damaged colonic crypt area eventually will slower the process of crypt regeneration by decreasing stem cell expansion through its anti-proliferative activities. By suppressing, the rapidly dividing stem cells during mucosal damage potentially protect the stem cells from adverse effects of direct contact with genotoxic luminal contents. It could be postulated that host-microbiota developed these systems to escape from epithelial/stem cell transformation and reduce the risk of developing cancer. It is important for the host to protect the stem/progenitor cells from such a transformation; therefore, they intriguingly co-evolved indigenous systems where they sacrifice themselves (suppressing stem/progenitor proliferation) with the help of bacterial metabolites. Though these metabolites may show negative effects on short-term wound healing mechanisms, in the long term they may prevent from a cancerous transformation of stem cells.

Indeed, a recent study by Moeller et al. identified that human gut microbiota descended from ancient symbionts that speciated simultaneously with humans and the African apes by testing the cospeciation between hominids and gut microbiota. Overall, these studies provide clues how butyrate (butyrate-producing bacteria) helped in fine tuning intestinal systems supporting the concept of co-evolution of microbiota-mammalians to support each other existence.

Funding: Dr. Jala is funded by NIH/NCI grant (R21CA191683-01) and supported by James Graham Brown Cancer Center and Dept. of Microbiology and Immunology, University of Louisville.

Conflicts of Interest: Both authors have completed the ICMJE uniform disclosure form (available at http://dx.doi.org/10.21037/tcr.2016.08.24). The authors have no conflicts of interest to declare.