Lung cancer remains the most lethal cancer worldwide, despite improvements in diagnostic and therapeutic techniques. Its incidence has not peaked in many parts of world, particularly in China, which has become a major public health challenge all the world (1). The prognosis for lung cancer patients is generally poor, with an overall 5 year survival rate of approximately 15%, and it has shown little improvement in recent decades (2,3). Several independent prognostic factors for survival have been identified: performance status (PS), disease stage, age, sex and amount of weight lost (4). Some of these factors are useful when choosing treatment options for an individual, principally disease stage and PS. However, the discriminant value of most potential prognostic biological markers is insufficient to predict the optimal therapeutic course for an individual (5,6).

Thyroid transcription factor 1 (TTF-1), also known as Nkx2.1 or thyroid-specific enhancer-binding protein, is a 38-kDa nuclear protein encoded by a gene located on chromosome 14q13. TTF1 is a master regulatory transcription factor for tissue-specific genes (7). TTF-1 is expressed in the thyroid, the lung and the diencephalon during embryogenesis. In normal lung, TTF1 plays a decisive role in the maintenance of the functions of terminal respiratory unit cells, where it regulates the expression of surfactant protein A (8), B (9), and C (10) and Clara cell secretory protein (11). Although the role of TTF1 as a lineage marker for terminal respiratory unit cells has been well documented (12), its role in carcinogenesis remains unclear.

The association between TTF-1 overexpression and survival in lung cancer patients has been studied for over a decade. However, no consensus has been reached; conflicting results have been reported from different laboratories. We therefore carried out a meta-analysis of data from published studies to quantitatively review the effect of TTF-1 overexpression in tumor tissue on survival in patients with non-small-cell lung cancer (NSCLC).

The electronic databases PubMed, Embase, and CNKI (China National Knowledge Infrastructure) were searched for studies to include in our meta-analysis. An upper date limit of Jan 31, 2012 was applied; we used no lower date limit. Searches included the terms “lung cancer”, “TTF-1”, “thyroid transcription factor 1”, and “prognosis”. We also reviewed the Cochrane Library for relevant articles. The references reported in the identified studies were also used to complete the search.

Studies eligible for inclusion in this meta-analysis met the following criteria: (I) measure TTF-1 expression in the primary lung cancer tissue with IHC (immunohistochemistry) or other methods; (II) provide information on survival (studies investigating response rates only were excluded); (III) have a follow up time exceeding 5 years; and (IV) When the same author reported results obtained from the same patient population in more than one publication, only the most recent report, or the most complete one, was included in the analysis. Two reviewers (PZ and QQ) independently determined study eligibility. Disagreements were resolved by consensus.

The final articles included were assessed independently by two reviewers (PZ and QQ). Data retrieved from the reports included first author, publication year, patient source, histology, disease stage, test method, TTF-1 positive and survival data (Table 1). If data from any of the above categories were not reported in the primary study, items were treated as “not applicable”. We did not contact the author of the primary study to request the information. 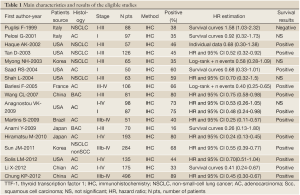 For the quantitative aggregation of the survival results, hazard ratios (HR) and their 95% confidence intervals (CIs) were combined to give the effective value. When these statistical variables were not given explicitly in an article, they were calculated from available numerical data using methods reported by Parmar et al. (13).

Heterogeneity of the individual HRs was calculated with Chi-squared tests according to Peto’s method (14). Meanwhile, Heterogeneity test with I2 statistic and Q statistic was performed. All the studies included were categorized by patient race, histology, disease stage. Individual meta-analysis was conducted in each subgroup. If HRs were found to have fine homogeneity, a fixed effect model was used for secondary analysis; if not, a random-effect model was used. In this meta-analysis, DerSimonian-Laird random effects analysis (15) was used to estimate the effect of TTF-1 overexpression on survival. By convention, an observed HR >1 implies worse survival for the group with TTF-1 overexpression. The impact of TTF-1 on survival was considered to be statistically significant if the 95% confidence interval (CI) did not overlap with 1. Horizontal lines represent 95% CIs. Each box represents the HR point estimate, and its area is proportional to the weight of the study. The diamond (and broken line) represents the overall summary estimate, with CI represented by its width. The unbroken vertical line is set at the null value (HR =1.0).

Seventeen studies (19-35) published between 1999 and 2012 were eligible for this systematic review with meta-analysis. All reported the prognostic value of TTF-1 status for survival in NSCLC patients. The total number of patients included was 2,235, ranging from 57 to 496 patients per study (median 106). The major characteristics of the 17 eligible publications are reported in Table 1.

These publications followed several different patient cohorts. The NSCLC studies considered either all lung cancer subtypes (n=17) and adenocarcinomas (n=11). Three studies had information for stages I, 4 for stage IIIb-IV disease. All 17 studies used immunohistochemistry (IHC) to evaluate TTF-1 expression in NSCLC. Among the 17 studies evaluating TTF-1 expression in NSCLC, 7 studies (1,364 patients: 61%) were performed in Asian populations, and the remaining 10 studies (871 patients: 39%) followed European or American patients. Only one of the 17 studies identified TTF-1 overexpression as an indicator of poor prognosis, 4 studies showed no statistically significant impact of VEGF overexpression on survival, and the other 12 studies showed for favorable significance. The proportion of patients exhibiting TTF-1 overexpression in individual studies ranged from 16% to 89%. 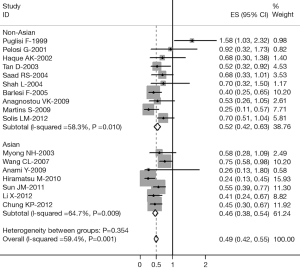 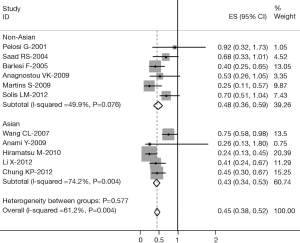 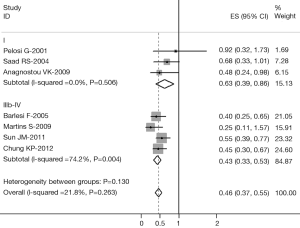 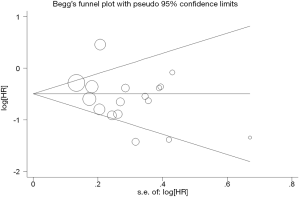 TTF-1 has been investigated as a potential prognostic indicator in NSCLC with conflicting results. Seventeen studies assessing the relationship between TTF-1 and survival have been published so far, only one (19) demonstrating a negative impact, four no impact of TTF-1 on survival (20,23,24,28), others positive impact. Pelosi et al. (20) showed that TTF-1 expression did not correlate with survival; however, a trend toward better outcome was observed for patients with tumors with more than 75% immunoreactive cells. However, Saad et al. (25) showed that moderate or strong TTF-1 expression was seen in 30 (60%) of 50 patients with conventional adenocarcinoma and was associated with significantly better survival compared with patients with weak or negative staining.

In the present meta-analysis, we have combined 17 published studies including 2,235 patients with NSCLC to yield summary statistics that indicate that TTF-1 overexpression has a significant correlation with favorable survival in NSCLC and AC patients. This correlation was observed in both Asian and non-Asian study populations. When analysis was restricted to stage I and stage IIIb-IV NSCLC, we observed a statistically significant effect of TTF-1 on favorable survival, suggesting that this good prognostic factor could be of importance not only in early-stage NSCLC but also in advanced staged NSCLC. Data were not sufficient to determine the prognostic value of VEGF expression in squamous cell carcinoma.

The effect of TTF-1 was more prominent in early and locally advanced disease (stages I-III) and in lung adenocarcinomas. The previous meta-analysis also observed that high TTF-1 protein expression is associated with better survival in NSCLC, mainly in early-stage NSCLC (41). The studies with early-stage NSCLC demonstrated that TTF1 can be a prognostic factor because most patients did not receive any adjuvant therapy, and subsequently survival was less likely to be affected by other treatments, as compared with surgical resection. In addition, 4 studies (26,30,32,35) of Stage IIIb-IV NSCLC included for our meta-analysis. When analysis was restricted to stage IIIb-IV NSCLC, we found that the combined HR (0.43) was lower than the combined HR (0.63) for studies of stages I NSCLC, suggesting that TTF-1 expression could be an important favorable prognostic factor for advanced-stage NSCLC.

Our data were consistent with the results of a previous meta-analysis (41) published in 2006 that showed an association between TTF-1 overexpression and good survival of patients with NSCLC. This analysis included only 10 studies, and the data were insufficient to determine the prognostic value in lung adenocarcinoma, disease stage. In addition, that meta-analysis did not determine the combined HR for subgroups divided according to patient ethnicity, histology, disease stage. We have improved upon that previous meta-analysis by including more recent related studies and by generally using a more comprehensive search strategy. Screening and study selection were performed independently and reproducibly by two reviewers. We also explored heterogeneity and potential publication bias in accordance with published guidelines.

Another potential source of bias is related to the method of HR and 95% CI extrapolation. If these statistics were not reported by the authors, we calculated them from the data available in the article. If this was not possible, we extrapolated them from the survival curves, necessarily making assumptions about the censoring process. Data for multivariate survival analysis reported in the article were included in the present systematic review with meta-analysis; if these data were not available, data calculated from survival curves by univariate analysis were included. These results should be confirmed by an adequately designed prospective study. Furthermore, the exact value of TTF-1 overexpression status needs to be determined by appropriate multivariate analysis. Unfortunately, few prospectively designed prognostic studies concerning biomarkers have been reported; thus, our collection of many retrospective studies revealed more significance.

Publication bias (56) is a major concern for all forms of meta-analysis; positive results tend to be accepted by journals, while negative results are often rejected or not even submitted. The present analysis does not support publication bias; the obtained summary statistics likely approximate the actual average. However, it should be noted that our meta-analysis could not completely exclude biases. For example, the study was restricted to papers published in English and Chinese, which probably introduced bias.

In conclusion, TTF-1 overexpression is associated with a favorable prognosis in patients with NSCLC in present meta-analysis, but there is a high heterogeneity between the studies. Interestingly, our meta-analysis suggests that TTF-1 is a favorable prognostic factor in stage I and stage IIIb-IV NSCLC and lung AC patients. These results should be confirmed by an adequately designed prospective study.