High-throughput molecular analysis is a well-known technology that plays an important role in exploring biological questions in many species, especially in human genomic studies. Over the past 20 years, gene expression profiling, a revolutionary technique, has been widely used for genomic identification, genetic testing, drug discovery, and disease diagnosis, among other things (1). The field of genomics and proteomics research has undergone neoteric fluctuations as a result of next-generation sequencing (NGS), a paradigm-shifting technology that provides higher accuracy, larger throughput and more applications than the microarray platform (2-4). The use of massively parallel sequencing has increasingly been the object of study in recent years. The NGS technologies are implemented for several applications, including whole genome sequencing, de novo assembly sequencing, resequencing, and transcriptome sequencing at the DNA or RNA level. For instance, de novo assembly sequencing assembles the genome of a particular organism without a reference genome sequence (5), which may lead to a better understanding at the genomic level and may assist in predicting genes, protein coding regions, and pathways. In addition, resequencing the organism with a known genome can help in understanding the relationship between genotype and phenotype and identify the differences among reference sequences (6,7). In addition, NGS technologies have been widely used to analyze small RNAs (8-10), including identification of differentially expressed micro RNAs (miRNAs), prediction of novel miRNAs, and annotation of other small non-coding RNAs. 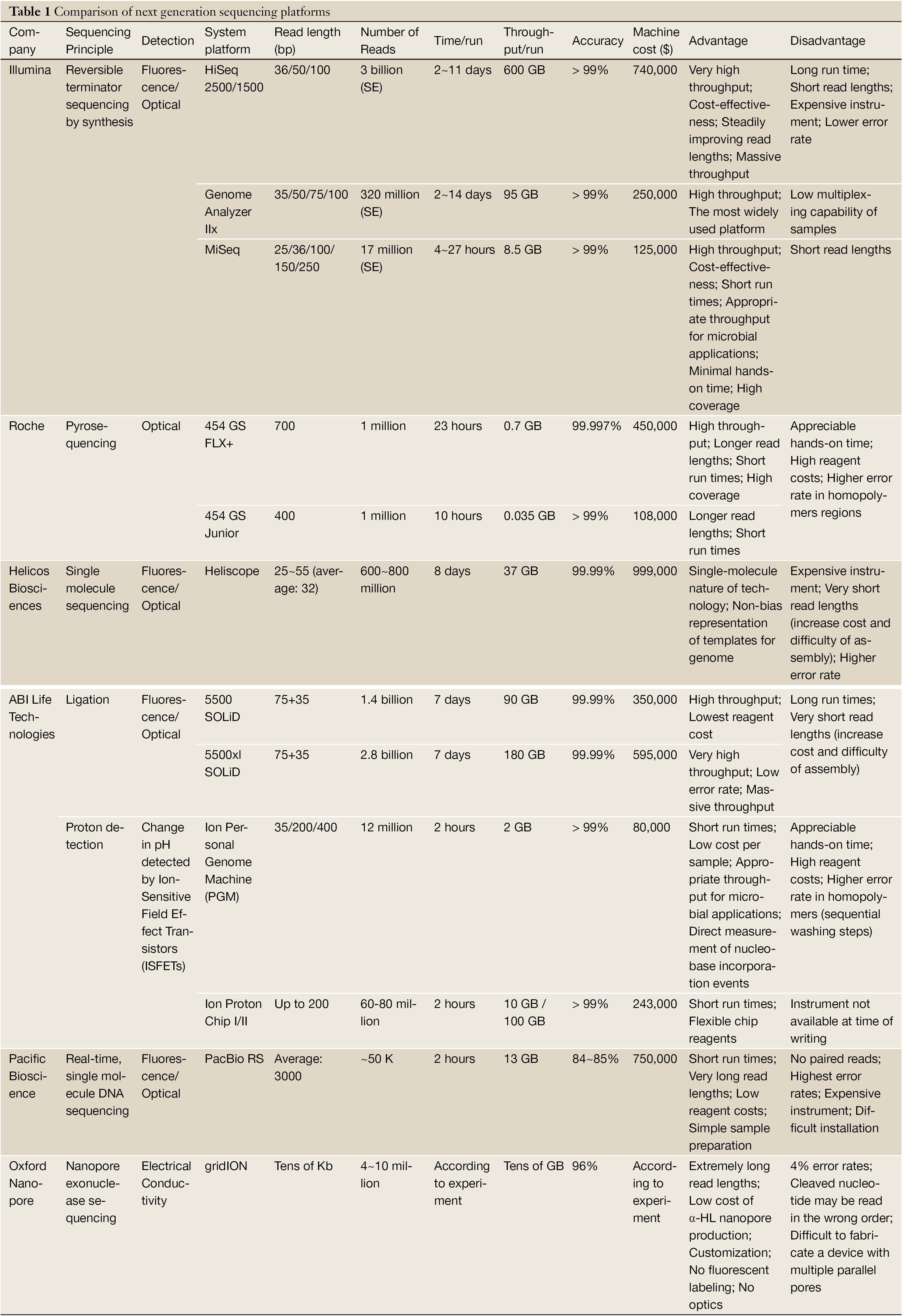 In this review, we begin by discussing preprocessing procedures, i.e., converting raw images into a final set of sequence reads. We then provide an overview of analytic pipelines and recommend some bioinformatics tools that were recently proposed in studies using next-generation DNA and RNA sequencing. Finally, we discuss the small RNA sequencing analytic workflow, annotation databases, and discovery of novel small RNAs by NGS technologies.

During each run from any NGS platform, several terabytes of raw image data are generated and converted to the FASTQ format files for further analysis. Image analysis uses raw images to locate clusters, export the positions and intensity, and estimate the noise for each cluster. The base-calling step identifies the sequence of base reads from each cluster and filters uncertain or low quality reads. If multiple samples are loaded and run on the same lane, a demultiplexing step is required to identify each sample by its individual index sequences (called “barcodes”). The CASAVA package developed by Illumina handles these preprocessing procedures; likewise, the Bioscope package developed by ABI can be used for preprocessing data in SOLiD format.

The read alignment in genomics, also called reference-based assembly (11), is utilized by read alignment tools (Table 2) to align several hundred or thousand millions of reads back to an existing reference genome. MAQ (12) is based on the idea of a “spaced seed indexing” strategy to map reads to a reference sequence. BFAST (13) is known for its speed and accuracy on mapping. Novoalign (14) uses the Needleman-Wunsch algorithm and affine gap penalties to find the globally optimum alignment. Burrows-Wheeler Aligner (BWA) (15) is based on Burrows-Wheeler Transformation indexing (59), including the BWA-short algorithm that queries short reads up to ~200 bp with a low error rate and the BWA-SW algorithm that queries long reads with a high error rate. SOAP3, the most recent version of SOAP, supports Graphics Processing Unit (GPU)-based parallel alignment and takes less than 30 seconds for a one-million-read alignment onto the human reference genome (16). 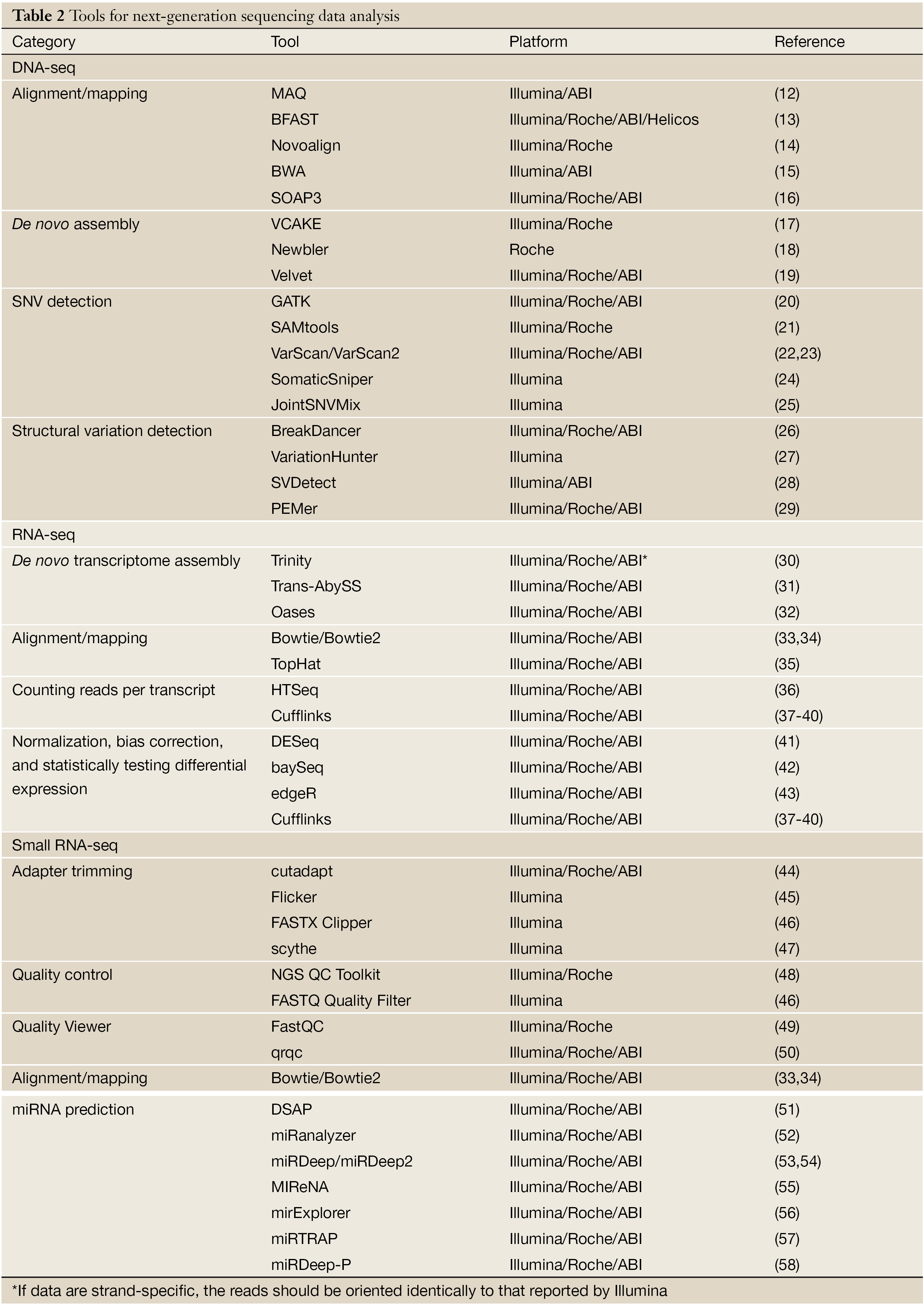 The de novo approaches particularly concentrate on grouping short reads into significant contigs and assembling these contigs into scaffolds to reconstruct the original genomic DNA for novel species. The crucial challenge of de novo assembly is that the read length is shorter than repeats in the genome (60). To overcome this problem, three strategies have been proposed (61). First, Warren et al. (17) developed VCAKE, a modification of simple k-mer extension, which is based on the greedy graph approach to assemble millions of reads using high-depth coverage to reduce the error rate. Second, Newbler et al. (18) used the overlap/layout/consensus method to deal with the ambiguous reads within the 454 platform. Lastly, Velvet, a well-known assembler, is applied by the extension of useful graph simplification to reduce the path complexity of the de Bruijn graph (19).

After assembling the reads, the next step in analytic pipelines is using a tool to call SNVs for identification of genetic variants. GATK (20) processes re-alignment insertions/deletions (indels), performs base quality recalibration, calls genotypes, and distinguishes true segregating variation by machine learning to discover and genotype variations among multiple samples. SAMtools (21) computes genotype likelihood to call SNVs or short indels. VarScan/VarScan2 (22,23) employs heuristic methods and a statistical test to detect SNVs and indels. SomaticSniper (24) and JointSNVMix (25) use the genotype likelihood model of MAQ and two probabilistic graphical models, respectively, to assess the probability of the differences between tumor and normal genotypes.

Besides exploring the human genome with DNA sequencing (DNA-seq) analysis, high-throughput sequencing has been applied to study RNA transcripts, typically referred to as RNA-seq or transcriptome-seq, and has provided comprehensive knowledge of both genomics and genetics. After the identical preprocessing procedures as in DNA-seq data analysis, RNA-seq data can be used for de novo transcriptome assembly, expression profiling analysis, variant calling and transcriptomic epigenetics.

The predominant application of RNA-seq is currently to profile gene expression levels and identify differentially expressed transcripts among groups of samples. Typical analysis of RNA-seq data for this purpose includes procedures of mapping reads against reference, counting reads per transcript, and statistical testing for differential expression (Figure 1). 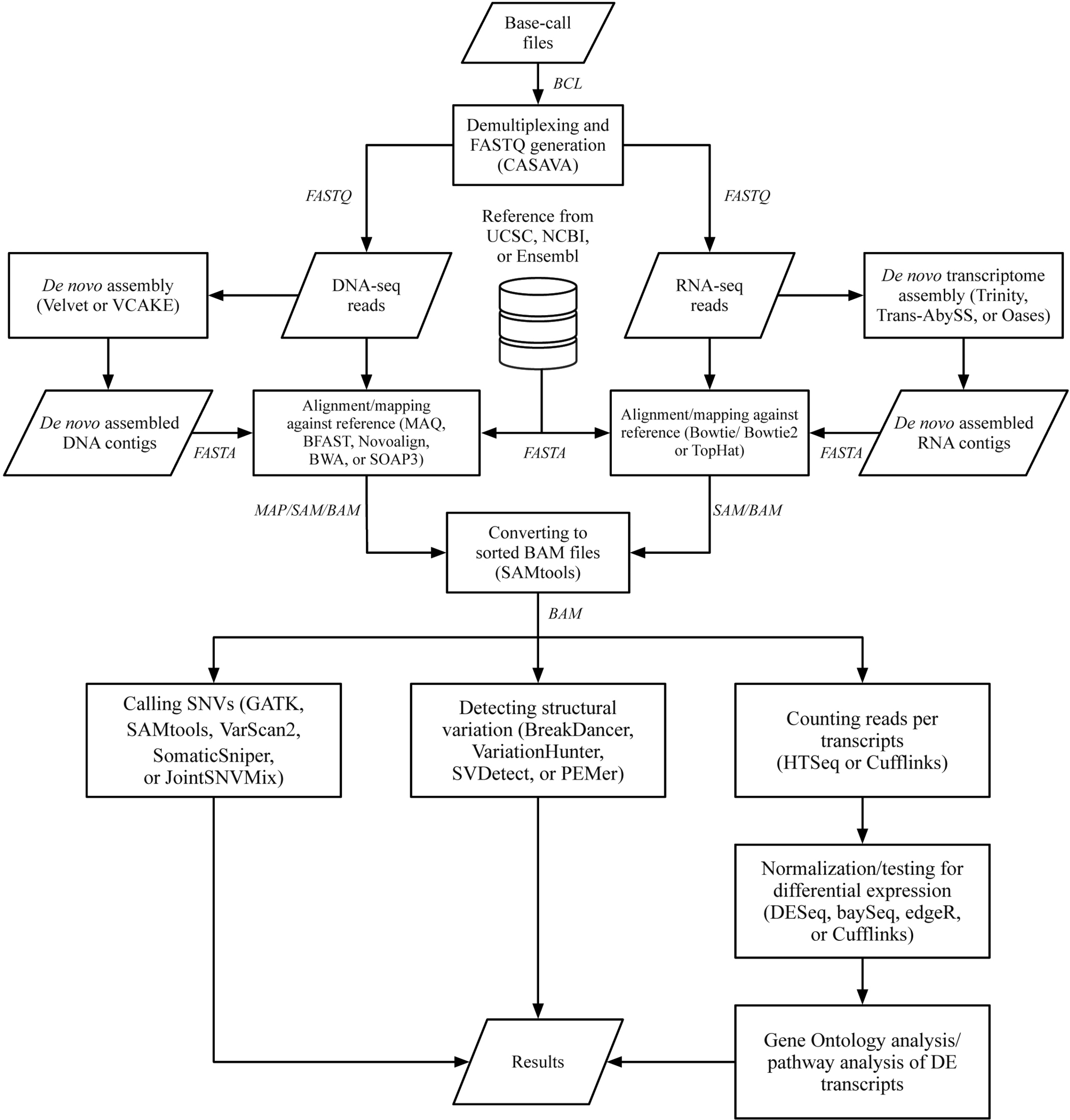 In mapping RNA-seq reads, short sequencing reads (FASTQ files) are aligned against the reference sequences (FASTA files), such as annotated genome sequences from the University of California, Santa Cruz (UCSC), the National Center for Biotechnology Information (NCBI), and Ensembl for well-studied species, or against de novo assembled RNA transcripts for novel species. Alignment programs include Bowtie (33), whose ultrafast and memory-efficient method is based on Burrows-Wheeler Transformation indexing (59); Bowtie2 (34), which is improved for finding longer or gapped alignments; and TopHat (35), which adds to Bowtie the capability of integrating known and identifying novel splice junctions. These software packages summarize the aligned results into BAM files, which can be visualized with Integrative Genomics Viewer (63,64).

Taking mapped RNA-seq reads, a Python-based tool, HTSeq (36), extracts read counts for each transcript. The read counts represent raw expression levels of transcripts and are used for statistically testing differential expression among samples subjected to different drug treatments or taken from patients with and without a certain disease. Realizing that the expression distribution of RNA-seq data is different from conventional microarrays (65,66), statisticians and biologists have developed tools for normalizing, bias correcting, and statistically testing RNA-seq read counts of transcripts based on Poisson or negative binomial (NB) distributions. DESeq (41), an R/Bioconductor package based on the NB distribution with adjustments by local regression; baySeq (42), which employs NB statistics and empirical Bayesian approaches; and edgeR (43), which uses the over-dispersed Poisson model combined with empirical Bayesian methods; are three frequently used tools for detecting differential expression of transcripts among a set of sequencing samples. In addition to the mentioned tools, the Cufflinks package (37-40) provides integrated solutions for assembling transcripts, estimating the abundances of transcripts, and testing differential expression. For further biological insights, the differential expression of transcripts can be analyzed for Gene Ontology and pathway enrichment, with methods identical to those implemented in conventional microarray data analyses.

Many classes of small RNAs (sRNAs), such as miRNA, piwi-interacting RNA (piRNA), and small interfering RNA (siRNA), have been reported to play an important role in post-translational regulation of gene expression. Next generation small RNA sequencing (sRNA-seq) technology has now become a gold standard for both sRNA discovery and sRNA profiling, because it is able to sequence the entire complement of sRNAs in a sample with high sensitivity. The following describes a typical workflow and the tools involved.

Though the sRNA-seq workflow depends on the application and sequencing platform one uses, some major steps shown in Figure 2 are generally followed. A library consisting of raw cDNA reads is obtained directly after sequencing. First, reads containing sequences of adapters should be trimmed off by using either an official toolkit provided by the company of the sequencer, such as Flicker by Illumina, or third-party toolkits, such as FASTX Clipper of FASTX Toolkit (46), scythe (47), or cutadapt (44). Second, reads having too low overall quality should be discarded using tools like FASTQ Quality Filter of the FASTX Toolkit or the NGS QC Toolkit (48). Next, tools like FastQC (49) or qrqc (50) in R/Bioconductor are used to check the quality statistics visually. Finally, since NGS may produce erroneous reads, the filtered reads should be validated by aligning to a reference genome database. For short read alignment, Bowtie/Bowtie2 are commonly used because they implement an optimized, memory-efficient algorithm and provide many built-in indexes for the genome database reference (33,34). 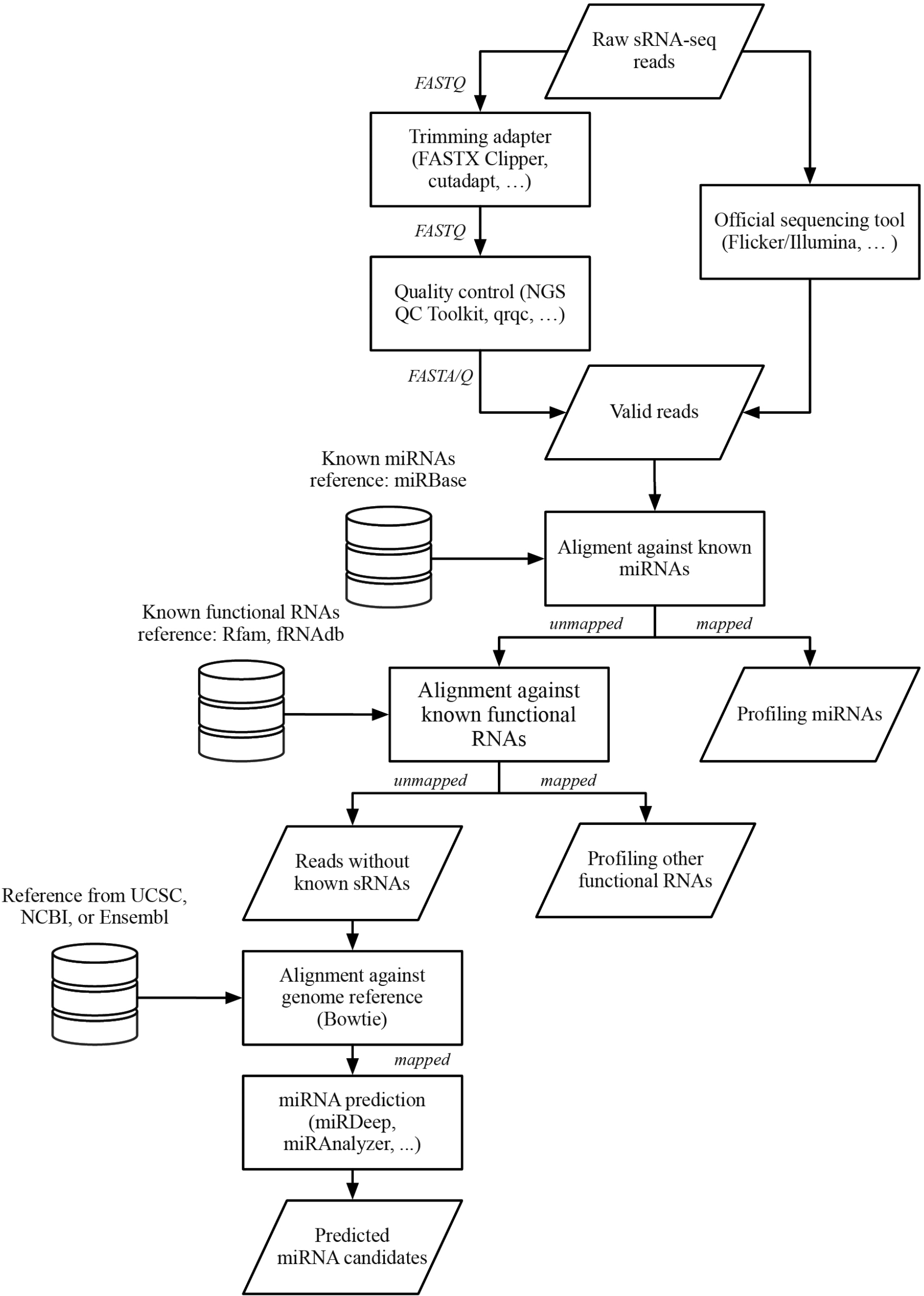 Some databases are commonly used in sRNA-seq and should be mentioned at the outset. Rfam is an open-access, annotated database providing information about families of non-coding RNAs, such as tRNA, rRNA, and snoRNA (78). miRBase is a database that contains sequences and annotations of all known miRNAs across species; the newest version, miRBase 19, contains around 25,000 mature products in nearly 200 species (79). These two databases help one identify known sRNA reads and one can later choose to either keep these reads or discard them depending on the purpose of the sequencing.

Discovery of new sRNAs is highly facilitated by NGS technology via its massively parallel high throughput of sequencing, which makes it possible to detect sRNAs with lower expression that are hard to find by traditional Sanger sequencing. Methods for identification of miRNAs have been well developed in recent years. There are many distinct algorithms for miRNA prediction, which are implemented in tools such as miRTRAP (57), MIReNA (55), miRExplorer (56), miRAnalyzer (52), miRDeep/miRDeep2 (53,54), and DSAP (51). These tools are mainly designed for animal species. For miRNA prediction in plants, miRDeep-P, a derivative of miRDeep, has been proposed (80). sRNA-seq is also useful in virology (81). Due to the high mutation rates of viruses, sRNA-seq can assist with in silico reconstruction of viral genomes from the antiviral RNAi response and identify virus-derived small interfering RNAs (vsiRNAs) based on the reference sequence (82). Since prediction tools continue to evolve at a fast pace, there is no consensus about which tool is most preferred, and while several comparisons have been made in the aforementioned references, we will defer to the readers to choose the tool most suitable for their situation (83,84).

Profiling of miRNAs is another important sRNA-seq application. It has been reported that the miRNA signature can serve as a biomarker for diseases, tissues, or stages of cell development (85,86) and has been used for drug development (58). Currently, microarrays, quantitative real-time RT-PCR, and sRNA-seq are all widely used for miRNA characterization, and their attributes have been described in detail (87). sRNA-seq provides high accuracy for distinguishing miRNAs with similar sequences, such as isomiRs, and can identify novel miRNAs at the same time. However, it should be pointed out that there are reproducible systematic biases toward different protocols of miRNA library construction due to different usage of RNA ligase (88,89). This bias can be eliminated by pooling different adapters (90). Thus, one should be careful about the protocol a dataset uses when performing differential expression analysis across various datasets. Quantitative RT-PCR can be used as a secondary means of absolute quantification.

NGS technologies provide opportunities for understanding unknown species and complex diseases. Although different companies implement different platforms with distinctive features and advantages, depend on the number of reads and the read length to ensure assembly quality and accuracy. Therefore, an important issue for future research will be the improvement of methods used for analysis of the huge amount of data produced by NGS. The goals will be to increase the accuracy of assembly sequencing, reduce the processing time, and fine-tune the efficiency of algorithms for analysis. In order to make the best use of NGS data, the design of state-of-the-art bioinformatics pipelines to extract meaningful biological insights will be a significant topic in the following years. Ultimately, NGS could reveal human genomic information and help to elucidate the function of the genome, which may provide therapeutic regimens for personalized medicine in the future.