Biopsy of a tumor site has long been the gold standard for the diagnosis of malignancy. Advanced sequencing technology has enabled us to study the molecular changes driving a particular cancer. As we move towards the molecular era of medicine, repeat tumor biopsies are often obtained to assess for development of resistance, which has both prognostic and therapeutic implications. However, the logistics of obtaining repeat tumor biopsies are complicated—many patients with advanced malignancies are unable or unwilling to undergo another invasive procedure and the skillset and personnel required for these procedures are often time consuming, expensive, and leads to delay in care. Furthermore, it is known that tumors develop heterogeneity over time and disease sites and therefore one biopsy may not provide a complete picture of the tumoral landscape.

Advancements in bioinformatics and nanotechnology have brought the “liquid biopsy”—i.e., assessing the genetic material of tumor cells in the blood and urine—to the forefront. There are three major sources for the plasma liquid biopsy: (I) circulating tumor cells (CTCs); (II) cell-free nucleic acids (cfNA); and (III) extracellular vehicles (EVs)—with the bulk of clinical studies thus far focusing on CTCs and cfNA. CTCs are those cells that have been able to detach from the primary tumor, infiltrate the vasculature, and enter into circulation. They have been recognized since 1896 (1), but until recently, the inability to detect and characterize them has limited their use. cfNA (most commonly cell-free DNA, cfDNA) are either passively secreted during tumor apoptosis or actively released due to reasons that are yet unclear. Extracellular vesicles are the least well characterized, but are composed of nucleic acids enveloped within a lipid membrane and are released by both normal and tumor cells. Table 1 describes the liquid biopsies in further depth, while Table 2 compares them to the conventional tumor biopsy. 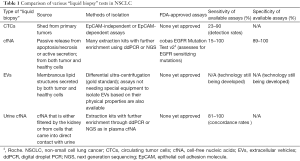 Table 2 Advantages and disadvantages of the different biopsy methods, both traditional and plasma-based
Full table

Non-small cell lung cancer (NSCLC) is a cancer for which there is great potential in the complementary use of the liquid biopsy. Advances over the past 2 decades have revealed that NSCLC, in particular adenocarcinoma, is comprised of distinct entities, driven by specific molecular changes (2). FDA-approved tyrosine kinase inhibitors (TKIs) are currently available for three driver mutations—EGFR, ALK, and ROS-1. Numerous phase I and II studies are ongoing using TKIs for other driver mutations. However, development of resistance mutations to TKIs is common, with the median duration of response commonly cited as about 12 months (3). TKIs have also been developed to target specific resistance mutations. However, assessment for these mutations requires a repeat tumor biopsy, which as described earlier, poses numerous challenges. Studies have shown that a liquid biopsy can be used to detect the presence of these mutations with varying sensitivity and specificity. Most of them, however, have been retrospective in nature.

Yanagita et al. (4) have recently published a prospective phase II study of first-line use of erlotinib in patients with EGFR activating mutations who consented to repeat biopsy at tumor progression along with serial blood draws to evaluate for both CTCs and cfDNA. They enrolled 60 patients, of which 44 had progressive disease. Of these 44 patients, 41 had paired CTC and cfDNA blood draws at baseline, 36 had them at progression, and 35 had repeat tumor biopsies at disease progression. The results of their study highlight both the advantages and pitfalls of using the liquid biopsy as a tool to identify mutations that confer resistance to the original TKI. The authors should be commended for their well-designed study, especially for its prospective design.

There was 100% concordance for the EGFR L858R substitution and exon 19 deletion as determined through digital droplet PCR (ddPCR) from blood cfDNA compared to tissue biopsy analysis. Unfortunately, as there were no true negative controls (in tissue or blood), it is not possible to calculate the specificity. However, the high concordance rate suggests that cfDNA may serve as a suitable alternative method for initial diagnosis in the right clinical setting and particularly in resource poor environments. For example, the incidence of EGFR mutant lung cancer is as high as 47% in lung adenocarcinomas seen in Asia/the Pacific islands (5). As a first in NSCLC, the FDA recently approved the cobas EGFR Mutation Test v2, a cfDNA assay assessing for the presence of the EGFR sensitizing mutations which will determine patient eligibility for EGFR inhibitors including gefitinib, erlotinib, and afatinib.

At progression on erlotinib, 35/44 patients had repeat tissue biopsies compared to 36/44 that had blood drawn for cfDNA and CTCs. Repeat tissue biopsy from the 35 patients at progression identified the presence of the T790M resistance mutation in 23 (66%) of patients. T790M mutation is the most common gatekeeper resistance mutation seen in 50% of patients treated with first generation TKIs. In contrast, only 9 of 39 blood samples were found to contain cfDNA at progression, of which 7 (18%) were found to have the T790M mutation. Due to an unequal number of tissue and plasma biopsies, it is not possible to calculate the true sensitivity, but would estimate it to be ~30%.

These findings are in contrast to a retrospective study to detect the presence of T790M mutations in cfDNA in patients treated with osimertinib, where the sensitivity was 70% (6). More recently, in a large study of 548 patients with EGFR mutant lung cancer, Wakelee et al. described a sensitivity of 81% for detecting the T790M mutation (7). Despite the lack of sensitivity in the study by Yanagita et al., all seven T790M-positive cfDNA samples corresponded with their respective tissue biopsy. Interestingly, in two patients where repeat tissue biopsy was not possible, plasma cfDNA revealed the T790M mutation. Lower sensitivity to detect resistance mutations may be due to fewer copies of circulating cfDNA, related to heterogeneous resistance patterns and differential shedding coupled with different sensitivities of sequencing technologies.

The other findings of this study are also worthy of further discussion as they highlight potential applications of the liquid biopsy as well as aspects warranting further research and refinement. The authors assessed the prognostic value of baseline CTC/cfDNA burden for progression free survival (PFS) (4). There was no significant relationship between CTC level and PFS (P=0.88), although the association was almost significant for lower baseline cfDNA with improved PFS (P=0.08). In contrast, a prospective study in patients with advanced NSCLC treated with systemic chemotherapy showed that higher baseline CTC (≥5) was significantly associated with poor PFS (P=0.034) (8) and a meta-analysis found a significant relationship between high baseline cfDNA and shorter PFS (9). It is important to note that there is currently not an accepted measure of “high” CTC count, with some studies using the cutoff of ≥3, whereas others use ≥5. Similarly the definition of high levels of cfDNA has also not been set. This is of especial concern when measuring copies of specific mutations by ddPCR, i.e., T790M as the authors did (4). Due to the lack of consistent findings and the absence of agreed upon measurements, cfDNA and CTC burden cannot be used currently as reliable prognostic markers for NSCLC.

Serial evaluation of CTCs and cfDNA failed to reveal a consistent pattern of change throughout therapy. The authors described four major patterns, one of which was no correlation between cfDNA or CTCs at baseline, on treatment, or at progression. In fact, 7 of the 36 samples did not have detectable cfDNA or CTCs at any point throughout the study and 15 of 41 patients did not have detectable CTCs or cfDNA at baseline. At time of disease progression, only 6 of 36 samples had both detectable CTCs and cfDNA. The lack of detection of cfDNA and CTC at baseline and at progression severely impacted the significance of the findings of Yanagita et al., limiting meaningful interpretation. The current study also did not address identification of various mutations using the CTCs. Studies have shown that changes in the tumor genotype during treatment response can be representatively monitored in CTCs (10,11). As for cfDNA, Sacher et al. recently published a prospective validation of cfDNA to detect EGFR mutations in advanced NSCLC treated with a EGFR TKI, also describing multiple patterns of change during serial cfDNA monitoring (12). Preliminary analysis suggests that continued presence of cfDNA may portend increased risk for progression, but the data is still immature. Refinements in blood collection and sequencing technologies will no doubt improve sensitivities of detection.

There has also been growing interesting in the use of the other liquid, i.e., urine, as it has been shown that cfDNA is also found in the urine. The aforementioned study by Wakelee et al. also tested for the T790M mutation in the urine using a quantitative next generation sequencing (NGS) assay and found a concordance rate of 81%. More importantly, the three methods (tissue biopsy, blood, and urine) provided complementary evidence for detection of T790M. In patients where tissue sample was negative or inadequate for testing were considered, urine identified 169 patients as T790M-positive (7). Given the complementary nature of results obtained from blood and urine, it may be that future endeavors focus on more frequent testing of blood and urine to detect earlier development of resistance mutations. If the patient is found to harbor a resistance mutation through the liquid biopsy, then it may be possible to omit the tissue biopsy and initiate alternative treatment sooner.

Although our ability to obtain genomic information has expanded with the advent of NGS, our capacity to synthesize and apply this information is still quite limited. An excellent example is in the evaluation for resistance mechanisms through cfDNA as ddPCR can only be performed looking for known resistance mutations. As we are already seeing, tumor cells can also develop alternative resistance mechanisms that we have not yet characterized or activate alternative pathways for which we may not have an evaluable biomarker. The lack of sensitivity of currently available assays does not yet preclude the need for a tissue biopsy (13). Therefore, although the results of this and other similar studies have unveiled the enormous potential of the “liquid biopsy” in the diagnosis and prognosis of NSCLC, barring very specific clinical scenarios, it is not quite ready for prime time use.

Conflicts of Interest: Both authors have completed the ICMJE uniform disclosure form (available at http://dx.doi.org/10.21037/tcr.2016.10.29). The authors have no conflicts of interest to declare.