Clinicopathological features and prognosis of younger patients with gastric carcinoma

Gastric carcinoma (GC) is the fourth most prevalent type of cancer with a low survival rate, and therefore, it places an enormous burden on societies worldwide (1,2). GC occurs most frequently in the 50–70 year age group (2-5). Many studies have shown that younger GC patients (≤50 years old) constitute a different clinical entity with its own specific clinicopathological features (6,7). Although young people are less commonly affected by GC, researchers have proposed that young patients show a worse prognosis than older patients. Specifically, GC has demonstrated more aggressive behaviour in patients under 50 years of age than in those over 50 years of age, with a median survival duration of 11 to 16 months versus 33 months, respectively (8). However, recent studies have suggested that younger GC patients have a better prognosis than older GC patients (6), and the number of studies performed on young GC patients is increasing. However, the impact of younger age (≤50 years) on the presentation and survival outcomes of GC patients remains controversial (3,6-10). Because of this lack of data on the biological and clinicopathological features of GC in young patients, we selected 487 patients with GC from one surgical team and performed a retrospective cohort study to identify the reasons for the different biological behaviour and prognosis in younger patients. The objective of this study was to assess the clinicopathological features and prognosis of GC patients younger than or equal to 50 years of age compared with the more typical GC population of older patients (51–70 years old).

Pathogenesis prior to hospital visit was defined as ranging from the time alarm symptoms developed to the time at which patients visited the doctor. The TNM classification of GC stage was based on the 7th edition of TNM staging (UICC 2009). Surgical and clinicopathological features were recorded on the basis of the Japanese Classification of Gastric Carcinoma. The following two histological types were included: differentiated (papillary adenocarcinoma and well/moderately differentiated adenocarcinomas) and undifferentiated (poorly or undifferentiated adenocarcinoma, mucinous carcinoma or signet ring cell). For calculation of the survival curves and 5-year disease-specific survival rate, patients who did not undergo tumor resection were excluded because they lacked complete histopathological examination or staging.

Statistical analysis was performed using SPSS version 21.0 statistical software (SPSS IBM USA). The figures were constructed using GraphPad Prism 5.0 (La Jolla, CA). The data are presented as the mean ± SD. The chi square test and independent T test were used to compare the clinicopathological data. The Kaplan-Meier method was used to calculate the OS rates. The log-rank test was used for the univariate analysis of the relationship between the clinical features and prognosis. Multivariate cox proportional hazards models were used when meaningful factors (P<0.05 in univariate analysis) and features with prognostic value were selected to identify the clinicopathological features that were independent predictive markers of the YG. P<0.05 was considered statistically significant for all methods. 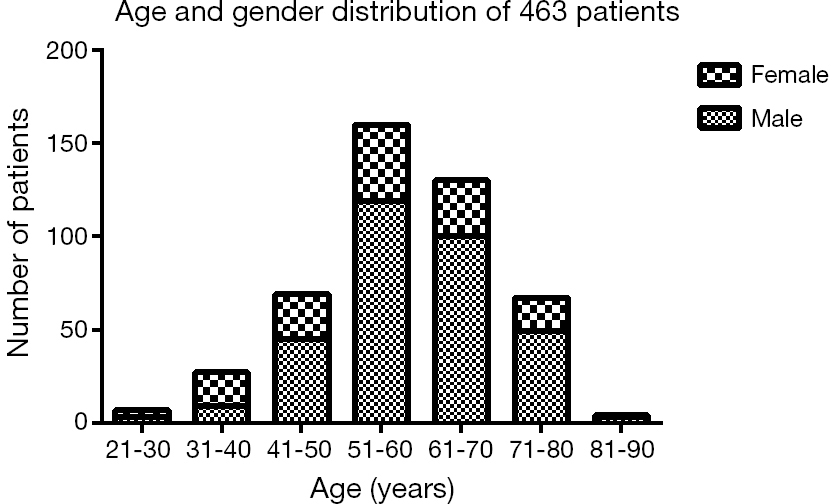 Figure 1 The age and gender distribution of 463 patients with GC. GC, gastric carcinoma. 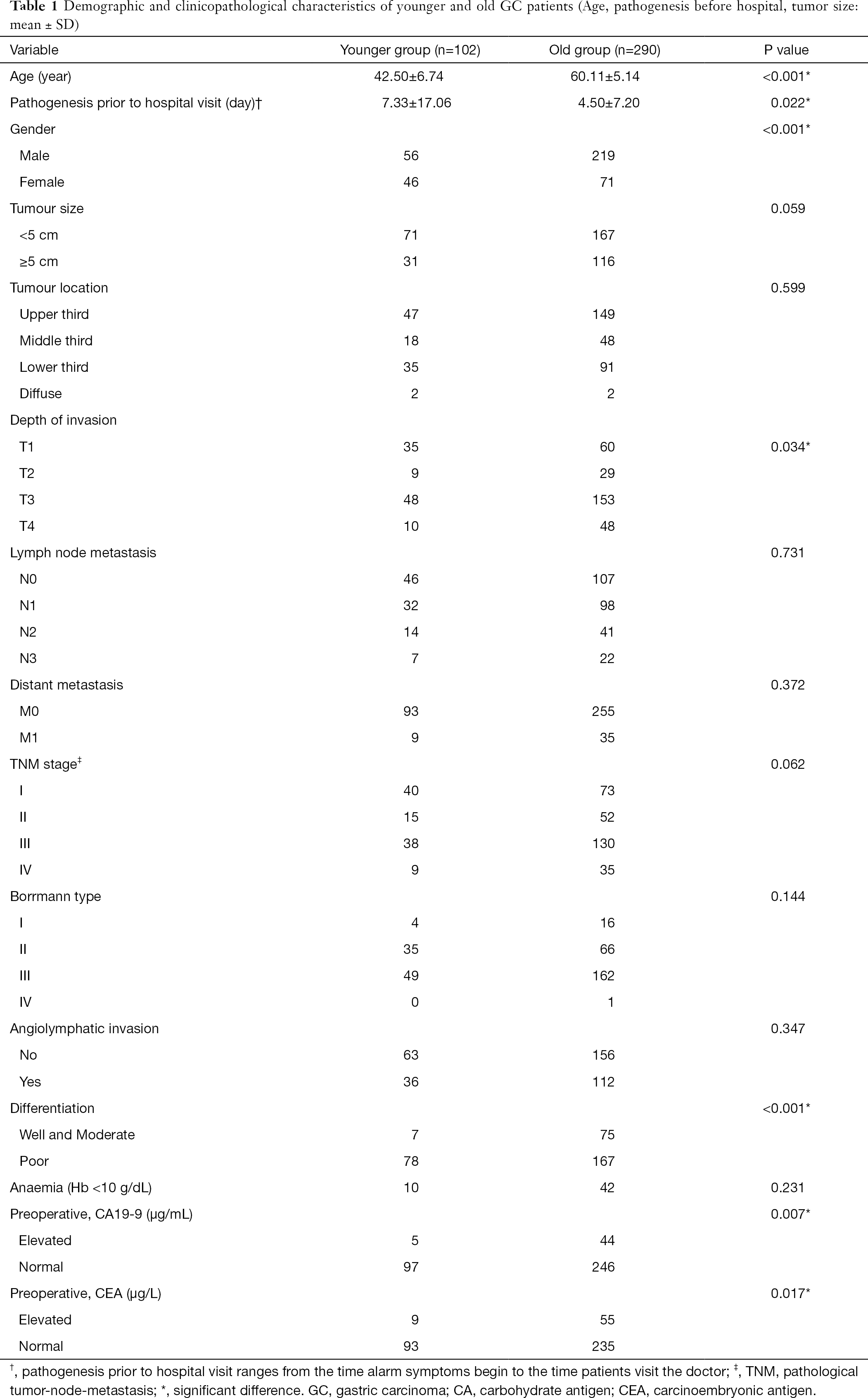 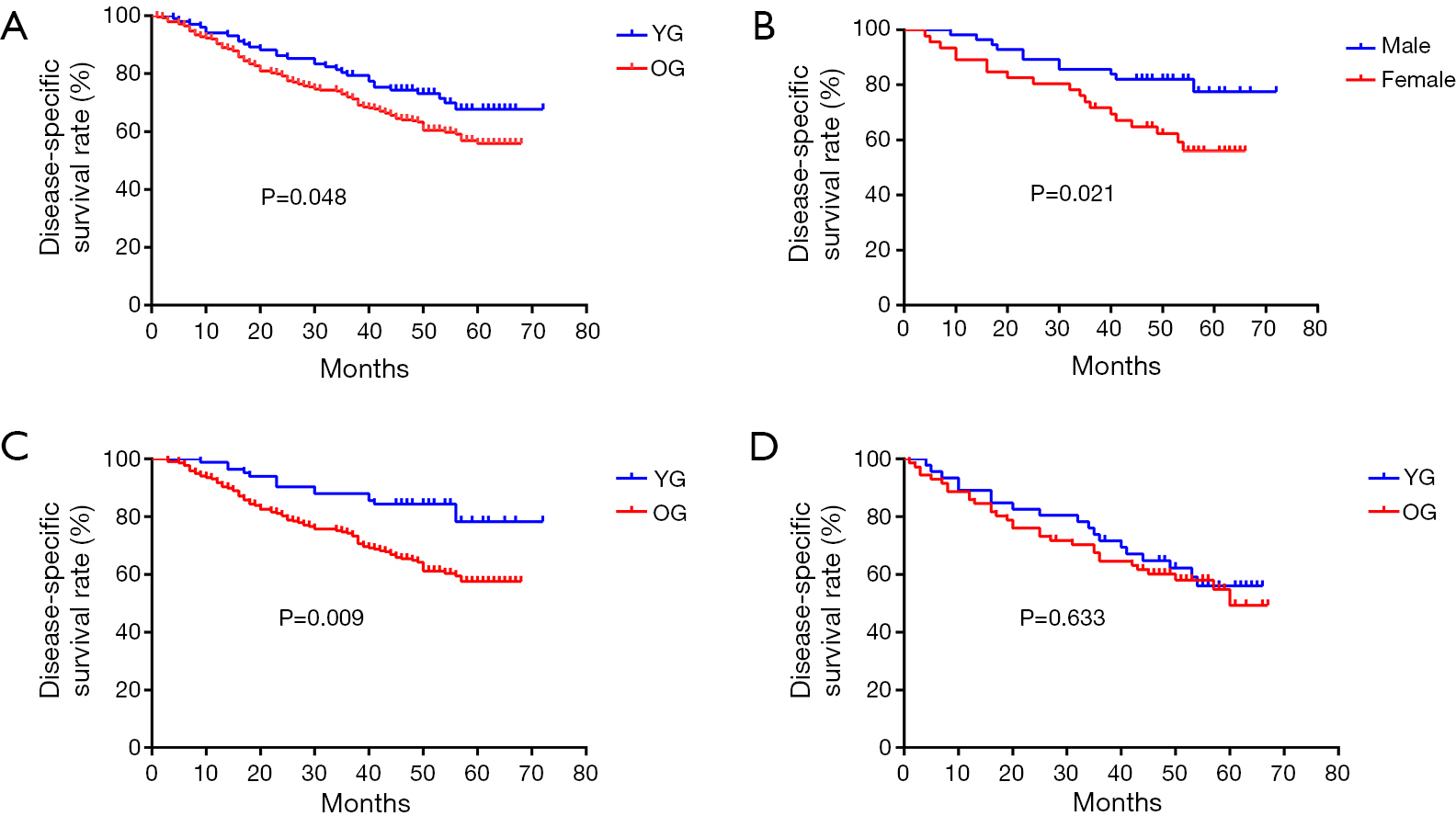 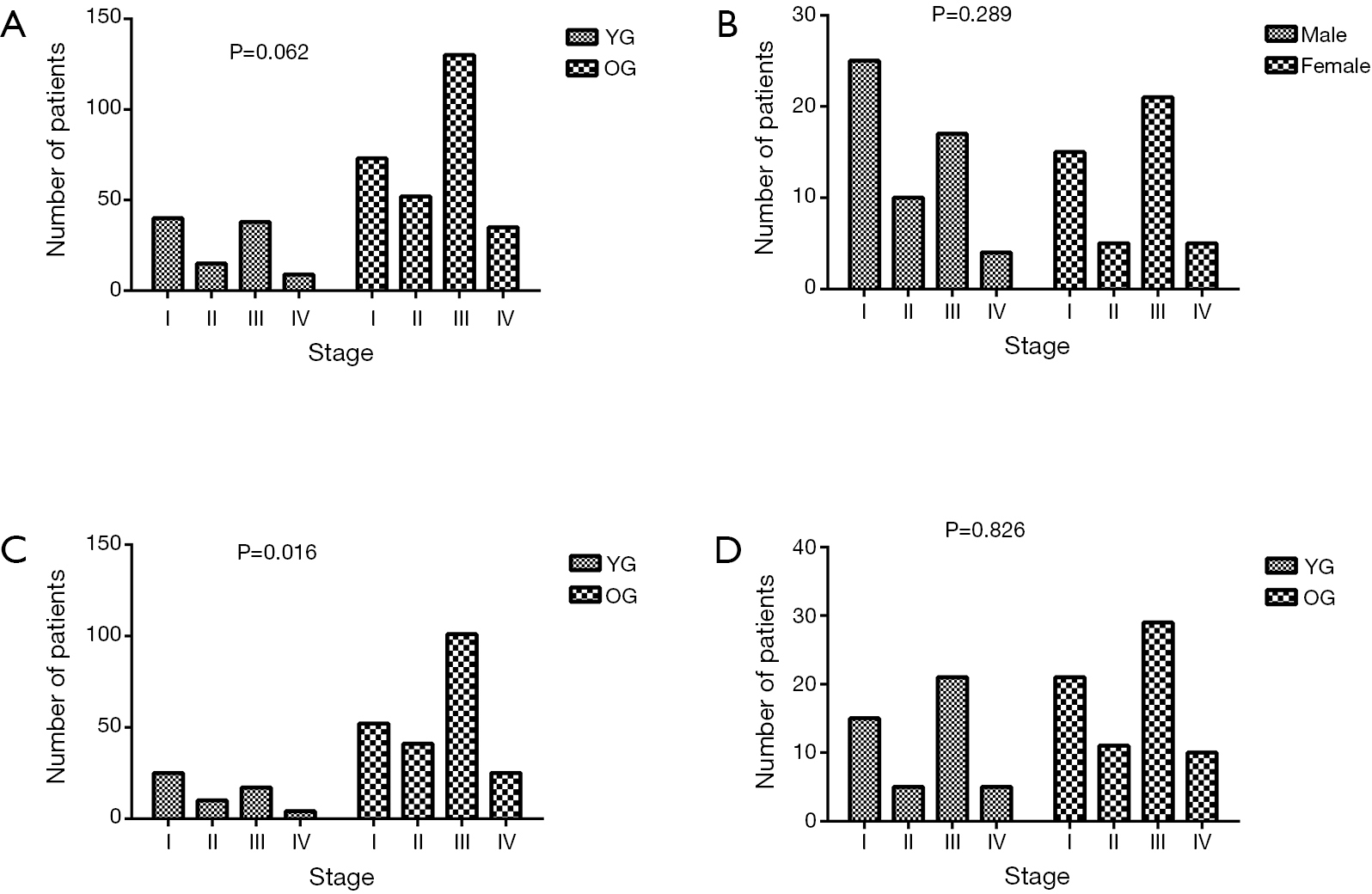 GC is generally considered a disease of the elderly, and patients have a mean age of over 60 years at diagnosis (10,11). GC occurs most frequently in the 50–70 year age group (2-5). However, the rate of GC in young patients has increased in recent decades despite a reduction in the overall prevalence of the disease (12-14). Due to incomplete data regarding whether GC in younger patients differs from that in older patients, we focused on patients ≤50 years old. In particular, we retrospectively analysed 392 patients with GC who underwent a stomach resection operation performed by the same surgeon, including 102 (26.0%) patients in the YG and 290 (74.0%) in the OG.

Previous studies have demonstrated numerous clinical differences between younger and old patients with GC. In particular, these results showed that the percentage of females was higher among younger compared to old patients (8,15-19), and our findings are consistent with these reports (P<0.001). Several reports have also suggested that hormonal factors might account for the higher percentage of young females with GC. Younger females show a higher level of oestrogen and an increased proportion of oestrogen receptor-positive cells (19-21). Nevertheless, the correlation between gender hormones and GC prognosis remains controversial, and further research is needed to confirm whether gender impacts the prognosis of younger patients.

According to our data, there were higher proportions of cases with an undifferentiated histological grade and the signet ring cell type of GC in younger patients, which is consistent with previous studies showing that younger patients display poorly differentiated histology (4,6,8,22). However, there were no significant differences in the tumor size, tumor location, TNM stage, Borrmann type, lymph node metastasis, distant metastasis, angiolymphatic invasion, and anaemia between the two groups in our study. The YG had a longer latency before presenting to the hospital than the OG, indicating that younger patients lack awareness of their self-health, which may lead to delayed diagnosis. Additionally, there were no significant differences in surgical features between the groups, such as the type of gastrectomy, curative resection, lymphadenectomy, radicality, and cancer-related combined resection. Though no significant difference was found between two groups, the comparatively shorter hospital stay after surgery for the YG might indicate that younger patients were more able to withstand stomach resection surgery.

The higher percentage of T1 depth of invasion, early stage and good physical fitness might explain the good outcome of the YG. In addition, the aggressive histology of younger GC patients may be balanced by the comparatively higher percentage of I/II TNM stage distribution. A higher percentage of patients with a normal CA19-9 level was also associated with the improved survival observed in the YG. Angiolymphatic invasion has been reported to be a negative factor associated with distant metastasis (23), and the YG showed a lower frequency of angiolymphatic invasion than the OG, but the difference lacked significance (P=0.347).

The 5-year disease-specific survival rate in the YG was significantly higher than that in the OG (P=0.048), which is consistent with the results of recent studies (6,7). In the YG, male patients showed a significantly higher survival rate than females (P=0.021). The 5-year disease-specific survival rate of male patients with GC in the YG was significantly higher than that of male patients in the OG (P=0.009), while the 5-year disease-specific survival of females was not different between age groups (P=0.633). These findings indicated that the better prognosis of the YG was most likely due to the higher survival rate among males than females. The lower TNM stage distribution of males in the YG and more advanced TNM stage of males in the OG may partially explain the good prognosis of males in the YG.Younger patients, especially males, diagnosed in earlier stage might be associated with their positive attitude and convenience to hospital. So, male GC patients under 50 years of age showed an improved 5-year survival rate. Additionally, the prognosis of females was poor for both the YG and OG, with no significant difference related to age. A previous study is in agreement with our findings (24); however, there is no precise explanation for these similarities. Furukawa et al. (25) suggested that females’ analogues or sex hormones might affect carcinogenesis or stomach cancer progression. In addition, pregnancy and delivery may accelerate the growth of stomach cancer cells, although the exact molecular mechanism responsible for this effect remains unclear.

Younger patients show distinguishing features and prognostic results compared to elderly patients; therefore, exploring and evaluating the prognostic factors that influence the survival rate in younger patients is meaningful. The prognosis for females was worse than that for males in the YG. In the present study, we also found that tumor size (≥5 cm), N classification (N2/3), elevated CA19-9 level and sex (Female) served as independent negative prognostic factors for younger patients with GC. Similarly, the CA19-9 level was previously reported to be a negative prognostic indicator (26), which is consistent with our findings.

It was the first time to exclude the factor of surgeon’s skill and we believe our results might provide meaningful conclusions regarding younger patients with GC. However, this was a small, single-centre study which lack in-depth study of the mechanism. Further large sample study with in-depth exploration of the mechanism was needed.

The authors acknowledge the work of Yuezhen Dai.

Funding: This study was supported by grants from the Natural Science Foundation of China (No. 81272726).

Ethical Statement: This study was approved by the ethic committee of Fudan university cancer center and written informed consent was obtained from all patients.