Based on a prospective institutional database at the Department of Oncology of Zhengzhou University Affiliated Cancer Hospital from January 2009 to January 2014, locally advanced esophageal carcinoma patients who received nCRT or chemotherapy at our institution were enrolled in this study. All patients met the following inclusion criteria: (I) histologically proven SCC; (II) clinical stage T2-4aN0-1M0 based on the 6th UICC-TNM classification; (III) resectable disease; (IV) 18 to 75 years of age; (V) Eastern Cooperative Oncology Group (ECOG) performance status score of 0 or 1; (VI) no history of other cancer or previous radiotherapy or chemotherapy against esophageal carcinoma.

The pre-therapeutic included physical examination, laboratory tests, pulmonary function test, endoscopic ultrasound (EUS), barium esophagogram and contrast-enhanced computed tomography (CT) of the neck, chest and the upper abdomen. Staging was classified according to the 6th UICC-TNM classification. Lymph nodes measuring more than 10 mm were considered to be malignant by CT or EUS.

Three-dimensional conformal radiation (3D-CRT) or intensity modulated radiation therapy (IMRT) using 6MV photons were used for radiotherapy plan. A total dose of 40 Gy was delivered in 20 fractions (five fractions per week) over 4 weeks, starting on the first day of chemotherapy. The gross tumor volume is defined as the primary tumor and the metastatic lymph nodes measuring 10 mm along the short axis. The clinical target volume (CTV) includes the primary tumor with a proximal and distal of 3 cm, metastatic lymph nodes and regional lymph nodes. The regional lymph nodes include bilaterally supraclavicular fossae and superior mediastinal lymph nodes for carcinoma of the upper thoracic esophagus, mediastinal lymph nodes for carcinoma of the middle thoracic esophagus and mediastinal and perigastric lymph nodes for lower thoracic esophagus. The planning target volume is defined as CTV plus a 0.6 cm margin in the lateral direction and a 1 cm margin in the cranio-caudal direction to account for respiratory organ motion and daily set-up error.

Esophagectomy with two-field lymphadenectomy was performed 2 to 3 weeks after neoadjuvant treatment. The surgery consisted of sweet procedure, Mc-Keown or minimally invasive esophagectomy (MIE), depending on tumor localization and patient characteristics. The continuity of the digestive tract was preserved with an esophagogastric end-to-side anastomosis. Resections were classified as three categories: the complete removal of the tumor, with microscopic examination of margins free of tumor cells (R0), microscopic examination of margins showing tumor cells (R1) and macroscopic examination showing tumor cells (R2). Patients with no residual viable tumor cells in the resected specimen were defined as pathologic complete response (pCR).

Patients with lymph node positive after surgery were given two courses of chemotherapy. Postoperative chemotherapy regimen was the same as preoperative one (DF or TP). Patients who showed loss of response to nCT would cross over to receive another regimen.

After surgery, all patients were followed every 3 months for the first 2 years and every 6 months for 3 or more years at the outpatient clinic. Physical examination, barium esophagogram and CT were used to assess recurrence. Recurrent disease was classified as locoregional or distant. Whenever a relapse was suspected, radiologic, endoscopic, or histologic confirmation was required for a diagnosis of recurrence.

Overall survival (OS) was estimated from the date of surgery to the date of death, or last follow-up. Disease-free survival (DFS) was measured from the date of surgery to first evidence of relapse or death due to any cause. DFS and OS were estimated by the Kaplan-Meier method. Continuous variables were compared using Student’s t-test (mean). Categorical variables were compared by Chi-square or Fisher exact test when appropriate. Differences were considered to be significant at the level of P<0.05. All calculations were performed with the SPSS software version 21.0 (Statistical Package for the Social Sciences, IBM Corp., Armonk, NY, USA).

A total of 134 patients received neoadjuvant treatment. Ten in nCRT (1 had progress disease, 1 had poor medical condition, 8 refusal to surgery) and 13 patients (3 had progress disease, 10 refusal to surgery) in nCT, respectively, did not receive surgery. The remaining 111 patients underwent esophagectomy after completion of neoadjuvant treatment. Among them, 58 (52.3%) received nCT and 53 (47.7%) underwent nCRT. Patients and tumor characteristics are shown in Table 1. Patients were restaged with barium esophagogram and contrast-enhanced CT of the neck, chest and the upper abdomen within one week after nCRT or nCT. For nCRT group, 6 patients achieved CR, 44 achieved PR and 3 achieved SD. Of 58 patients who underwent nCT, 5 patients achieved CR, 40 achieved PR, and 13 achieved SD. 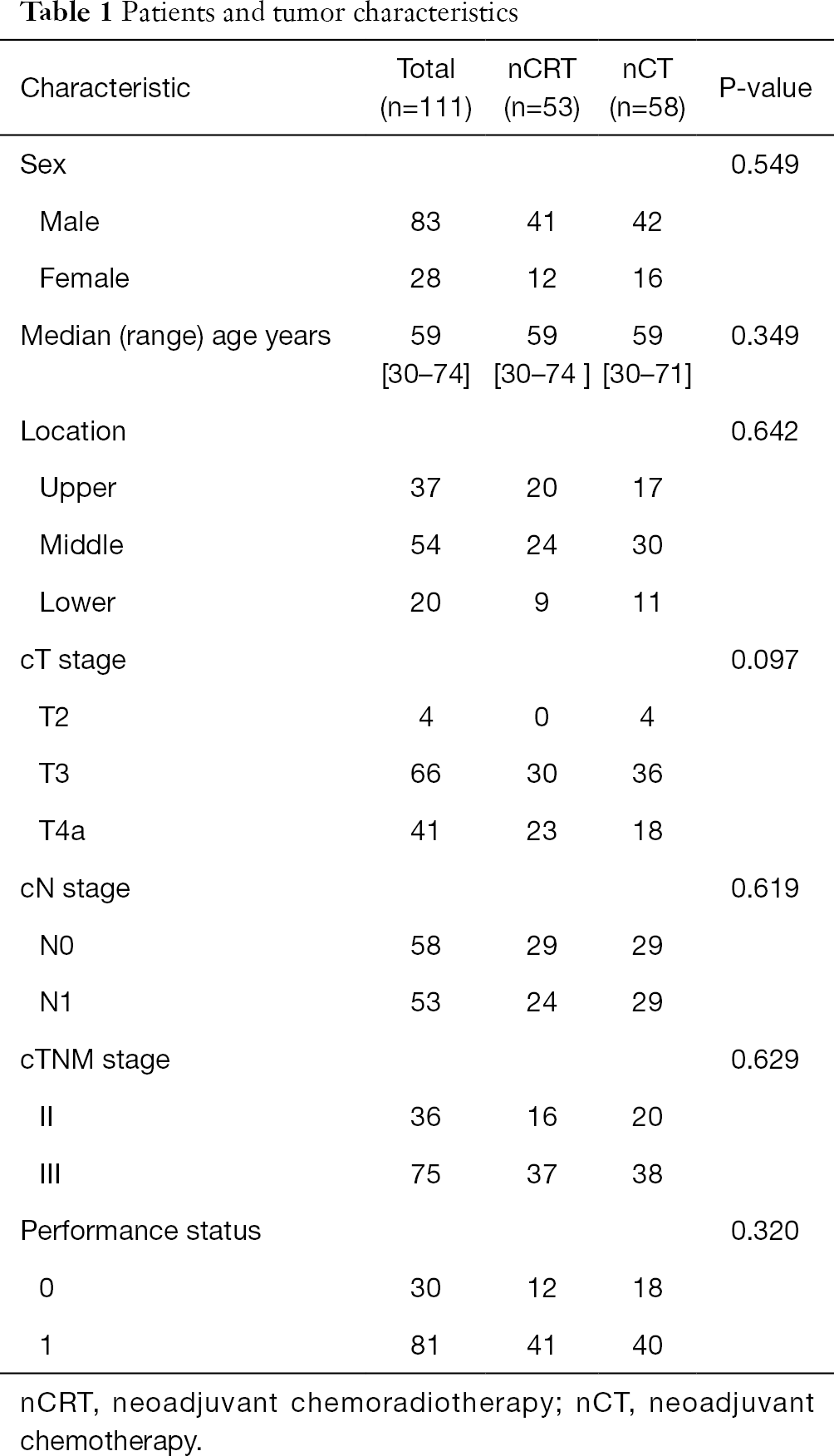 Toxicity of neoadjuvant treatment was commonly mild. The incidences of major grade 3 or 4 adverse events in nCRT and nCT were 4 and 3 for leucopenia, 1 and 0 for esophagitis, 2 and 4 for nausea/vomiting, respectively. No patients died of complications related to neoadjuvant treatment.

Sweet procedure was performed on most patients (54.1%). MIE was only performed in the nCT group for fear of higher intraoperative risks related to radiation. The pCR rate in the nCRT group was nearly twice that of nCT group, but showed no significant differences. The proportion of patients with pN0 in nCRT group (86.8%) was more than that of nCT group (70.7%). The type of surgery and histological results are shown in Table 2.

Postoperative morbidity was observed in 22 patients in the nCT group and 17 patients in the CRT group (P=0.660). Postoperative complications are summarized in Table 3. One patients (1.9%) in the nCRT group died within 30 days after surgery, as did one (1.7%) in the nCT group (P=1.0). Median postoperative hospital stay was 14 days (range 7 to 45 days) and 15 days (range 9 to 60 days) for nCRT and nCT group, respectively. No differences were found between the two groups (P=0.294). 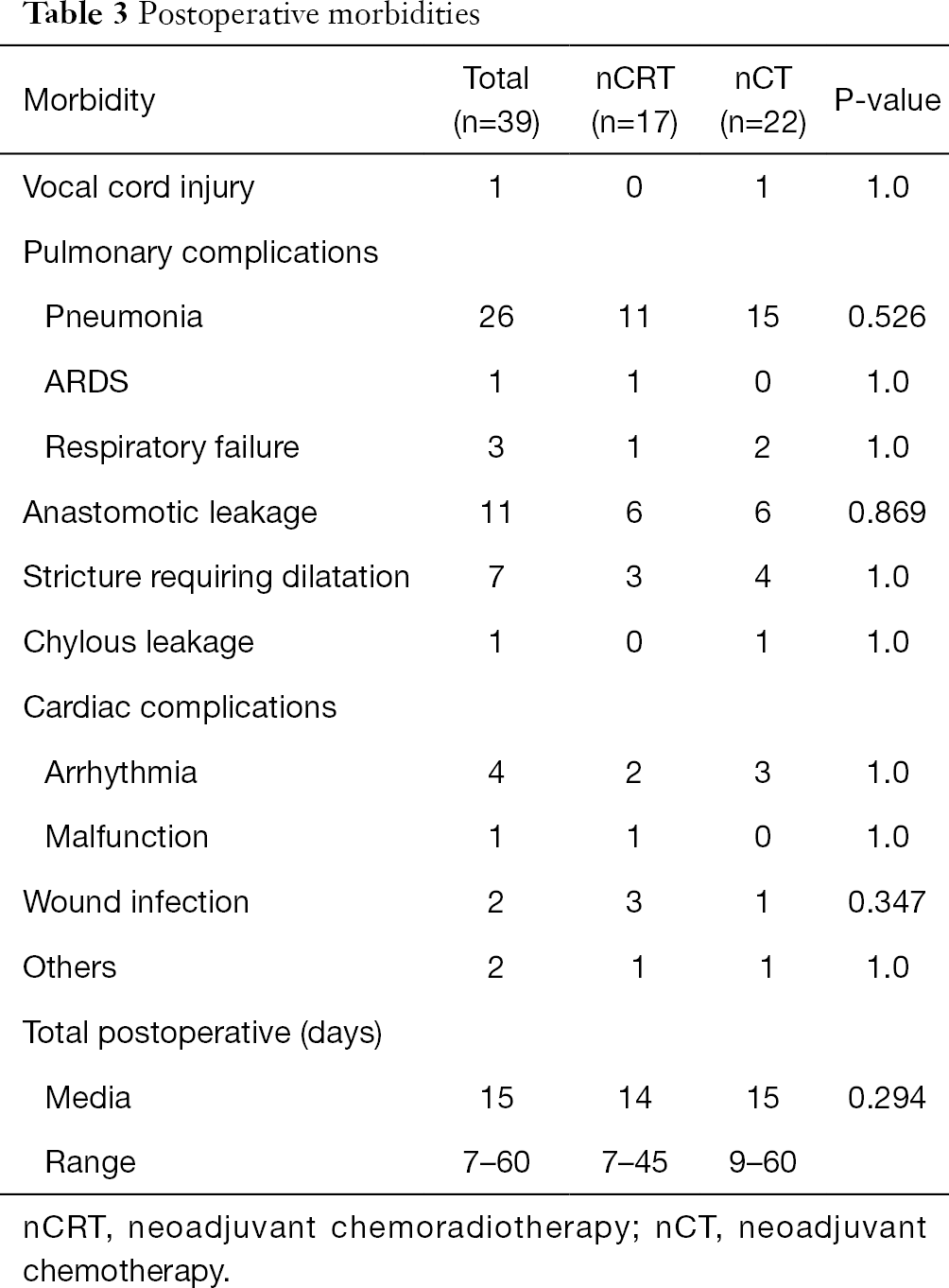 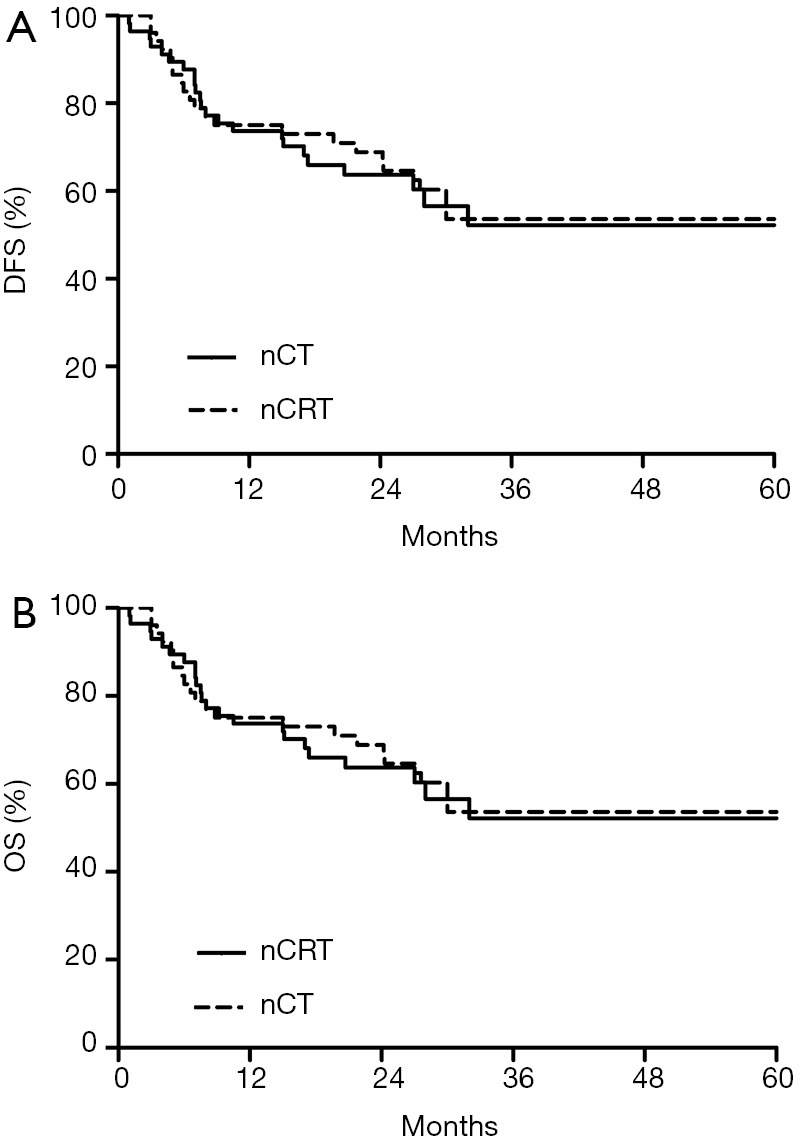 As shown in Table 4, relapses occurred in 20 patients for the nCRT group and in 23 patients in the nCT group (P=0.836). Additional 7 patients (including 2 patients in nCRT group, and 5 in nCT group) suffering from recurrence were still alive at the end of follow-up. No significant differences were found between nCRT and nCT group in the pattern of failure. 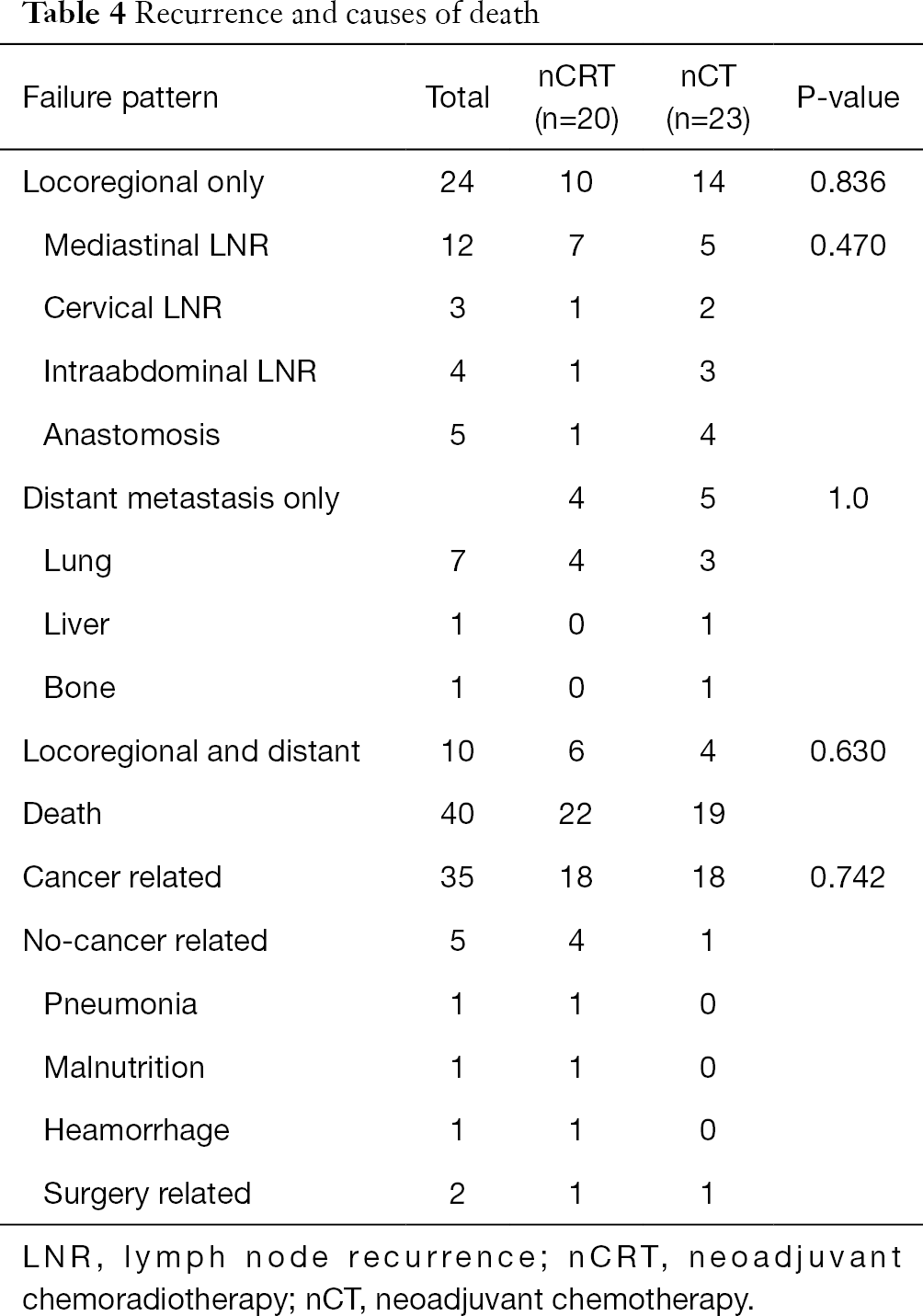 In the past two decades, the prognosis of surgically treated esophageal carcinoma has progressively improved, not only due to precise preoperative staging, postoperative management and surgical technique, but also due to the incremental inclusion of patients with esophageal carcinoma in neoadjuvant treatment protocols (7-9). Despite these improvements, the long-term survival for patients after surgery remains poor. In our analysis, we showed that the 3-year OS was 59.5% in the nCRT group and 56.2% in the nCT group, similar to several previous trials for ESCC patients (2,10,11). The long-term result of CROSS trial showed that median OS for ESCC patients was 81.6 months in the nCRT plus surgery group and 21.1 months in the surgery alone group (12). In JOCG 9907 trial, the 5-year OS for patients with ESCC was 55% in nCT group and 43% in adjuvant chemotherapy group (11). Furthermore, OS and DFS showed no significant differences between two groups in our retrospective and nonrandomized study. Similarly, in several small sample size studies, neoadjuvant CRT did not show survival advantage compared with nCT for patients with locally advanced esophageal carcinoma, but most of these studies were on AC patients (13,14). For patients with locally advanced ESCC, it remains unclear which neoadjuvant treatment is better. JCOG1109 from Japan may resolve this problem: the partial aim of the trial was to confirm whether CRT with CDDP + 5-FU was superior to CDDP + 5-FU as preoperative therapies (15). In contrast to the trial from Japan, our study did not exclude patients with clinical stage T4, because TP showed better efficacy than DF regimen in previous reports (2,16). Thus, TP was selected as the most common nCT for patients with ESCC since 2012 at our institution. Moreover, in term of the only one cycle of chemotherapy with cisplatin and fluorouracil used in nCRT group, our prior phase II clinical trial with the same protocol in locally advanced ESCC showed that the rate of pCR was 29.5% and 5-year OS was 45.3%, consistent with the outcome of the trial from Australia for a subgroup of ESCC patients (10). Neoadjuvant CRT did not improve survival in ESCC or AC patients with clinical stage I or II compared with surgery alone (17). Interestingly, compared with patients with stage III, neoadjuvant CT with cisplatin and fluorouracil is more effective in clinical stage II (10). We hypothesized that patients with clinical stage II or III will benefit from different neoadjuvant treatment protocols and more intensive perioperative therapy is required for patients with clinical stage III. However, in stratification analysis, we found that ESCC patients with clinical stage III did not benefit from nCRT.

pCR is associated with favorable prognosis in patients with esophageal carcinoma who receive neoadjuvant treatment, and neoadjuvant CRT improves the rate of pCR compared with that of nCT (18,19). Our study showed that the pCR rate was 28.3% in the nCRT group versus 13.8% in the nCT group (P=0.06). This is different from previous studies, as higher pCR rate in nCT group was achieved by use of TP (10,19). Among patients in the nCT group of our study, none of 7 patients who undertook DF regimen achieved pCR, while 8 of 51 (15.7%) patients who undertook TP regimen showed pCR. Fan et al. reported pCR rate of 13.3% (4/35) after two cycles of TP regimen for locally advanced ESCC (20). Moreover, pCR rate reached almost 50% for AC or ESCC patients in neoadjuvant CRT with docetaxel/paclitaxel-based chemotherapy (2,21). A phase II study reported that pCR rate was 47% of combined docetaxel-based chemotherapy and radiotherapy followed by surgery for esophageal cancer, and 5-year OS for pCR, near pCR, and presence of residual tumor subsets was 77%, 44%, and 14%, respectively (P<0.001). In present study, 3-year total OS was 68.0% in pCR, but patients with pCR did not show survival advantage compared with no-pCR (21). Despite higher pCR rate in the nCRT group, this did not translate into an OS benefit. It is possible that adding a focal treatment in nCT will not have an effect on survival for patients with occult systemic metastasis.

Neoadjuvant CT may impair human immune system, and impact on wound healing and infectious morbidity. The concurrent chemoradiotherapy may lead to higher intra-postoperative incidences because of radiotherapy induced edema, inflammation and fibrosis (13). Gronnier et al. reported that postoperative anastomotic leakage rates in nCRT and surgery alone were 8.8% versus 10.6% (P=0.220), and 90-day postoperative morbidity rates were 33.4% versus 32.1% (P=0.564) (22). A randomized clinical trial also revealed no significant difference in the incidence of complications between patients in nCT and nCRT group. However, complications were significantly more severe in nCRT (23). Similarly, our study showed that total postoperative morbidity rates in nCRT group and CT group were 32.1% versus 37.9% (P=0.660), but two cases died from complications related to anastomotic leakage in nCRT group.

Our study has some limitations. This is a retrospective analysis with a small sample size. Types of surgery and chemotherapy protocols between groups were not balanced among the patients, which may impair explanatory power. In addition, the follow-up period in nCT group was too short, which would affect the accuracy of the outcome.

Compared with nCT, neoadjuvant CRT may improve the pCR rate in patients with locally advanced ESCC but does not increase the risk of postoperative morbidity. Neoadjuvant CRT or CT can achieve favorable results with regard to OS and DFS. A large multi-center, randomized, prospective trial is needed to prove whether CRT or CT is better.