This was a single center study performed at the Cancer Center of Irvine (Irvine, CA). Study candidates included non-metastatic patients with T2–T3b tumors and prostate glands less than 60 cc. We did not classify patients in the cT1 “clinical T1” category as the T1 staging does not accurately quantify the amount of tumor in the prostate. All patients were classified into T2–T3b categories based on biopsy, physical exam, and imaging studies. There were no stage T4 patients. All Gleason and PSA levels were included. Patients were stratified into risk groups according to NCCN Guidelines v1.2011. Gleason 3+4 [7] patients were treated without androgen deprivation therapy (ADT) unless PSA >10. Gleason scores 4+3 [7] and 4+4 [8] were treated with 6 months of ADT. Gleason 9 and 10 received 12 months of ADT. 158 patients (49%) received an absorbable polyethylene glycol (PEG) rectal spacer to help reduce rectal toxicity. All patients consented to having their full clinical data included in our research study.

Two HDR implants were performed 1 week apart. During each implant procedure, the patient was positioned in the dorsal lithotomy position with either spinal or general anesthesia administered. A Foley catheter was placed into the bladder and expanded with 5 mL of contrast media. A 6.5-megahertz (MHz) endorectal ultrasound probe was inserted to provide ultrasound image guidance, and an interstitial template was secured against the perineum to position and secure the implant needles. Needles were implanted and placed strategically to provide optimal dose conformity. In a typical implant 13 to 15 needles were implanted. Dose was delivered twice daily, once in the morning and once again in the afternoon. Most patients received 4 Gray (Gy) per fraction for a total 8 Gy for each implant, 16 Gy for the two HDR implants combined. The average HDR dose was 17.7 Gy [standard deviation (SD) =3.3 Gy].

HDR plans were generated using the Brachyvision treatment planning program (varian medical systems). The prostate gland was contoured as both the clinical target volume (CTV) and planning target volume (PTV) for treatment planning. The brachytherapy dose was prescribed to the 100% isodose line. Treatment planning goals were as follows: prescribed dose to at least 90% of the CTV (V100 >90), nor more than 40% of the CTV to receive greater than 150% of prescribed dose (V150 <40%), maximum urethral dose under 120%, and no more than 2 cc of either the rectum or bladder to receive greater than 75% of prescribed dose. For 158 patients (49%), a PEG spacer was injected during the second implant to aid in reducing the radiation dose the rectal area. The spacer material resorbs within 6 weeks of implantation.

All patients had five gold fiducial markers inserted into the prostate. The fiducial markers were used for daily image guided radiation therapy. Cone beam computed tomography (CBCT) images were obtained prior to every treatment. Using the original treatment planning CT as a reference, the gold fiducials were aligned precisely in three dimensions. This process was repeated prior to every treatment thus ensuring a high level of treatment accuracy.

One hundred and fifty eight patients (49%) were treated in combination with a perirectal spacer made from PEG gel. This procedure has been detailed in previous reports (13), but here will be described briefly. A needle is placed under ultrasound guidance into the anterior perirectal space. 10 cc of the spacer material is injected to create an approximately 1.5 cm separation between the rectum and prostate. The spacer material resorbs and is excreted through the kidneys in roughly 6 weeks. 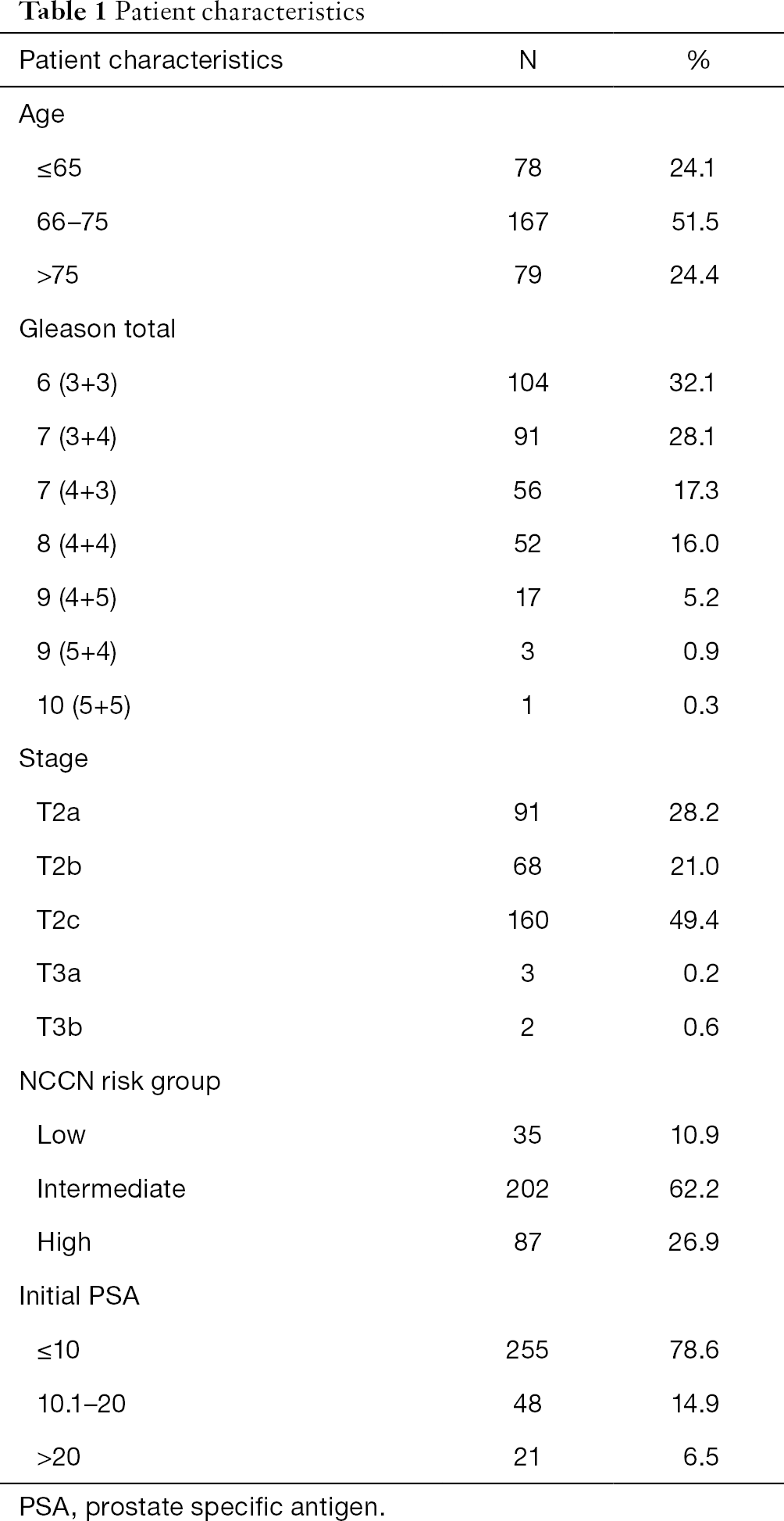 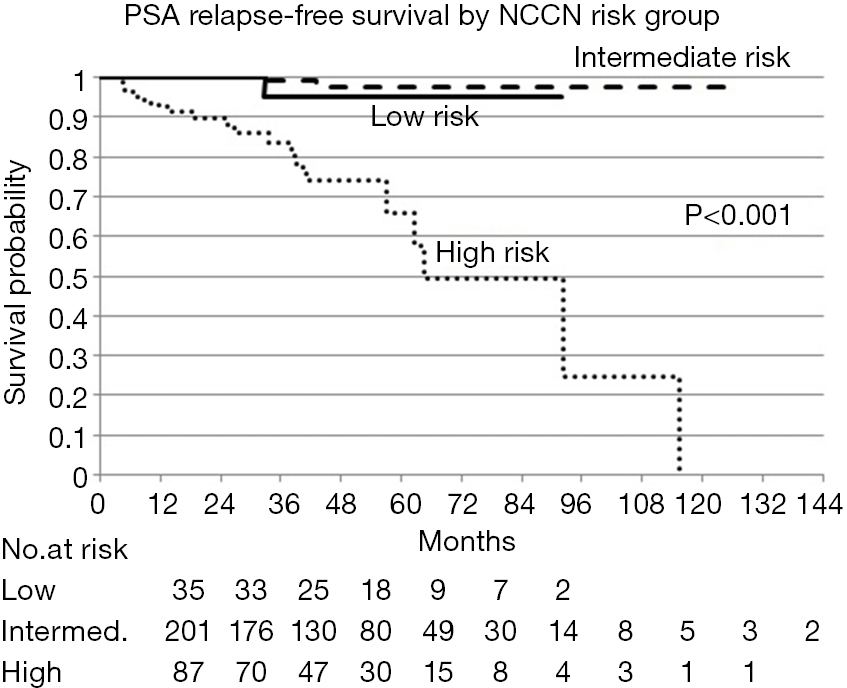 Acute grade 1, 2, and 3 GU toxicities were 36%, 0.4%, and 0%. Most grade 1 toxicities consisted of increase in urinary frequency which on average resolved in 7 months.

The 3 years incidence of late grade 1, 2 and 3 rectal toxicities were 6%, 2.2%, and 0.4%. All late grade 1 and 2 reactions eventually resolved symptomatically within 1 year after treatment. The patient with a late grade 3 reaction developed severe proctitis 17 months after finishing radiation. The patient developed a mixture of severe fecal obstruction, explosive diarrhea, and fecal incontinence. He was treated with a combination of laxatives, stool softeners, and hydrocortisone suppositories. His symptoms resolved after 9 months and did not require any surgical procedures.

Several studies have highlighted the importance of dose escalation in the treatment of intermediate and high risk prostate cancer (2-3,15). With dose escalation, however it is predicted that men will experience more acute and chronic toxicities. Our data shows that with our HDR brachytherapy/IMRT combination, PSA control rates are extremely high with very low early and late side effects. Despite limited 3-year of follow-up, our results are consistent with data reported by other institutions that practice combined modality radiation for the treatment of prostate cancer (1,5,15). Three-year biochemical control rates were excellent for the low and intermediate risk patients at 95% and 97% respectively. It is interesting to note that biochemical control was higher for the intermediate risk patients than the low risk patients. We attribute this to statistical variation resulting from the low number of patients in the low risk arm. There were no biochemical failures in patients with Gleason 3+4 [7] prostate cancer, showing that ADT is not critical in their treatment management. The clinical outcomes of our patients receiving combined modality radiation therapy for prostate cancer are consistent with other comparison studies (1) which have shown improved PSA relapse free survival with the addition of HDR brachytherapy to external beam radiation. Deutsch (1) showed improved 5-year actuarial PSA relapse-free survival (PRFS) for combination therapy (HDR/IMRT) vs. ultra-high-dose IMRT: 100% vs. 98% (P=0.71), 98% vs. 84% (P<0.001), and 93% vs. 71% (P=0.23), for NCCN low, intermediate, and high-risk groups, respectively.

Almost half (49%) of patients received a PEG spacer along with radiation. The spacer does not appear to have an appreciable effect on the biochemical control rates of our patients, as our control rates are very similar to other published series (1-5). GI toxicity was very low with only one grade 3 rectal complication that resolved without surgical intervention.

Overall our treatment fractionation has much lower rates of acute and late GU and GI side effects as compared with other published series (16). This is likely because our HDR fractionation consists of smaller more frequent doses. Since the doses per fraction we use are lower than other centers, it makes radiobiological sense that the toxicity profile is much lower. Despite the protracted HDR fractionation, biochemical control does not appear to be compromised but leads to a decrease in acute and late GI/GU toxicities.

We continue to show that the combination HDR/IMRT therapy results in high PSA control rates with minimal GI and GU toxicities.

A portion of this study was funded by a research grant from the Medici Foundation (Irvine, CA, USA).