Hepatocellular carcinoma (HCC) is the third major fatal cause of cancer globally, and the most common etiology for this cancer is chronic infection with hepatitis B virus (HBV) (1,2). China has the largest disease burdens of HBV infection and HCC globally (3). However, the precise mechanism underlying HCC remains poorly understood. Cytokines are key immunomodulatory molecules in the immune response system and are reported to be important factors in HCC progression. It has been reported that cytokine genotypes may be critical to the genetic regulation of immune responses to HBV infection and in determining an individual’s level of HCC risk. Numerous studies have demonstrated that single nucleotide polymorphisms (SNPs) appear to be consistently associated with HCC risk (4). Multiple SNPs in cytokine genes and their receptors are known to influence different clinical outcomes of HBV-infected patients and to be involved in the molecular mechanisms of hepatitis-related HCC (5-7).

Interleukin-10 (IL-10) is a powerful multifunctional cytokine produced by T-helper 2 cells and macrophages that exhibits complex biological activity. The IL-10 gene, which is located in 1q31-32, is composed of 5 exons and 4 introns (8). In recent years, SNPs in IL-10 and IL-10 receptor beta (IL-10RB) have been shown to be closely correlated to the pathogenesis of many cancers (9-11). The IL-10RB, interferon-α (IFN-α) and the interferon-γ (IFN-γ) receptors are located in a cluster of class II cytokine receptor gene at 21q22 (12). One IL-10RB gene polymorphism (IL10RB E47K) has been associated with a risk of HBV persistence (13). The relationships between IL-10 and IL-10RB gene polymorphisms and inflammation, such as chronic hepatitis B (CHB) and HCC, have aroused widespread interest.

In view of this and based on SNP genotype data in the HapMap phase II + phase III database, four tagSNPs (rs3790622, rs1518110 and rs1800872 in the IL-10 gene and rs2244305 in the IL-10RB gene) were selected for genotyping because they cover about 80% of the SNP sites (MAF >0.1). To examin the correlations between the four SNPs and susceptibility to HCC and CHB, polymerase chain reaction-restriction fragment length polymorphism (PCR-RFLP) and matrix-assisted laser desorption/ionization time-of-flight (MALDI-TOF) were applied to analyze IL-10 and IL-10RB gene polymorphisms in HCC, CHB and healthy groups. In this study, we present data describing a relationship between IL-10 and IL-10RB gene polymorphisms and susceptibility to hepatitis B-related HCC.

Peripheral blood samples were collected from 430 HCC patients, 342 CHB patients and 371 healthy donors of the Chinese Han population from November 2001 to April 2010. HCC patients were recruited from Peking University People’s Hospital (Beijing, China), the Affiliated Hospital of Guilin Medical University (Guilin, China) and Henan Cancer Hospital (Henan, China). The diagnosis of HCC was according to imaging and presence of alpha-fetoprotein (AFP) level >400 ng/mL. In cases where AFP <400 ng/mL, the diagnosis of HCC was made by having two typical dynamic imaging studies or one typical imaging study in patients with cirrhosis and a nodule >1 or 2 cm, as per the Asia-Pacific Association of the Study of the Liver (APASL) guidelines. CHB donors were patients diagnosed at Peking University People’s Hospital who met the diagnostic standard (14). Healthy donors were selected randomly from individuals conducting the medical examination in Peking University People’s Hospital. Donors with HBV or HCV infection, liver cirrhosis and cancer were excluded. The detailed clinical and biological characteristics of all patients are showed in Table 1. The blood samples were collected and rapidly transferred to −80 °C for storage. The Center Ethics Committees of Henan Cancer Hospital authorized this work. Written informed consent based on the Declaration of Helsinki was obtained from all patients. 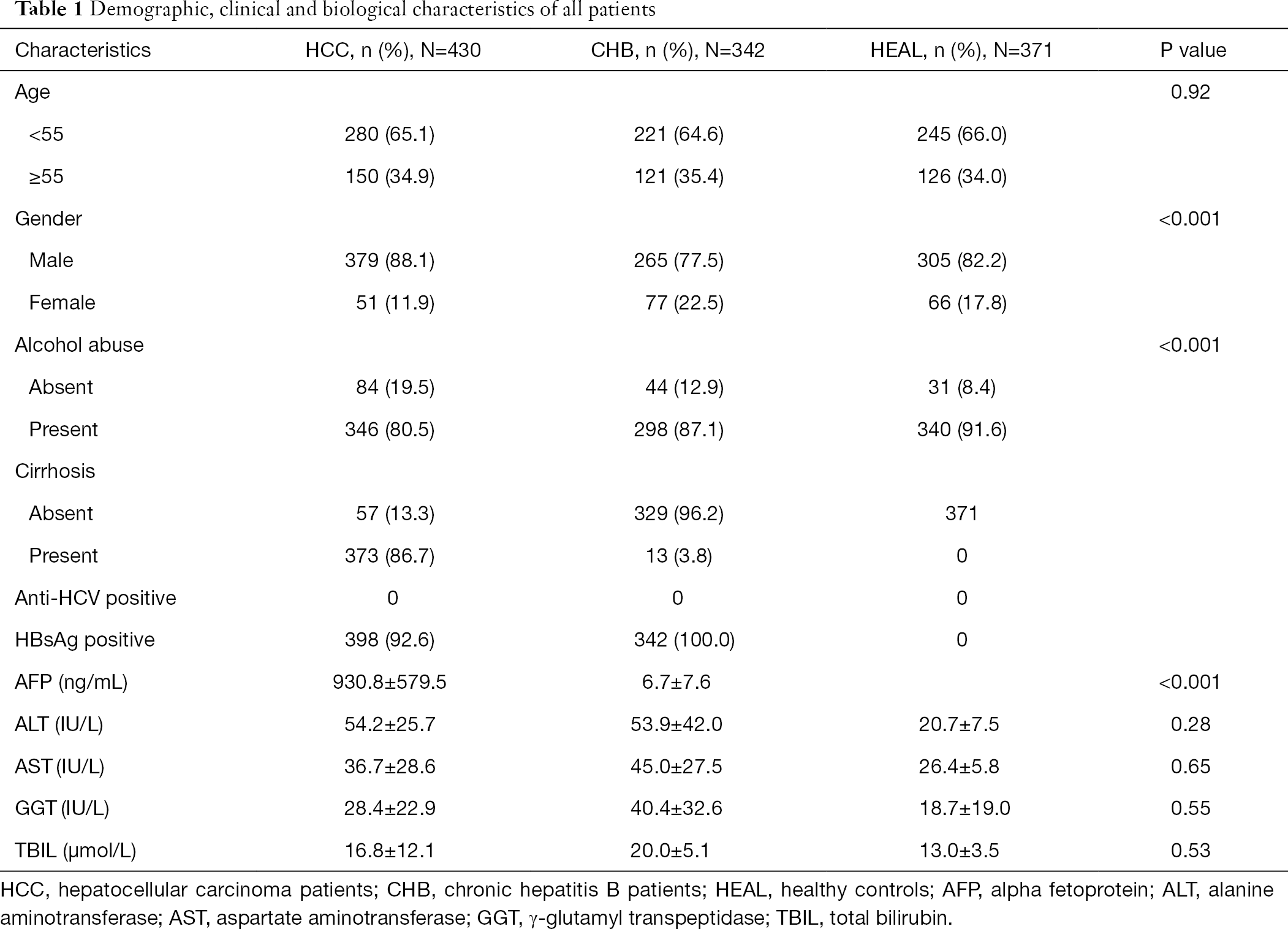 DNA was extracted from peripheral blood leukocytes using a standard phenol-chloroform method. Polymorphism analysis was conducted using the high-throughput array platform based on the MassARRAY molecular weight (Sequenom Corporation, CA, USA) according to the manufacturer’s protocol, as previously described (15). First, PCR and single-base extension primers were designed by Sequenom Assay Design 3.1 software (Table 2). Second, target fragments were amplified from the DNA samples using a semi-nested PCR reaction in a 384-well SpectroCHIP microarray. Finally, after hybridization of the SNP sites with the probes, the molecular differences in bases between the extension products and the non-extension primers were detected by an MALDI-TOF Mass Spectrometer. The Sequenom MassARRAY RT software was used to analyze the result.

Statistical analysis was performed using SPSS software (version 13.0, SPSS Inc., Chicago, IL, USA). The allele and genotype frequencies of the IL-10 and IL-10RB genes were calculated by direct counting. The chi-square test was used to compare the allele and genotype frequencies between the groups, and the Hardy-Weinberg equilibrium was used to determine the genotype distribution. Odds ratio (OR) and 95% confidence intervals (95% CI) were calculated using logistic regression. Data were considered statistically significant at P<0.05.

The clinical characteristics of all donors

No significant differences were observed in the age or the aspartate aminotransferase (AST), alanine aminotransferase (ALT), γ-glutamyl transpeptidase (GGT) or total bilirubin (TBIL) levels of the HCC or CHB groups when compared to the healthy group (all P>0.05, Table 1). All healthy donors were HBsAg negative, but 92.6% of the HCC patients were HBsAg positive; all donors were anti-HCV negative. The AFP level and the frequency of cirrhosis in the HCC group were significantly higher than those of CHB group. The distributions of gender and alcohol abuse showed that male, alcohol-abusing donors accounted for the majority of the HCC, CHB and healthy donors. All donors were randomized into three groups; thus, these features represented a true natural history of the incidence of CHB and HCC in Han population. 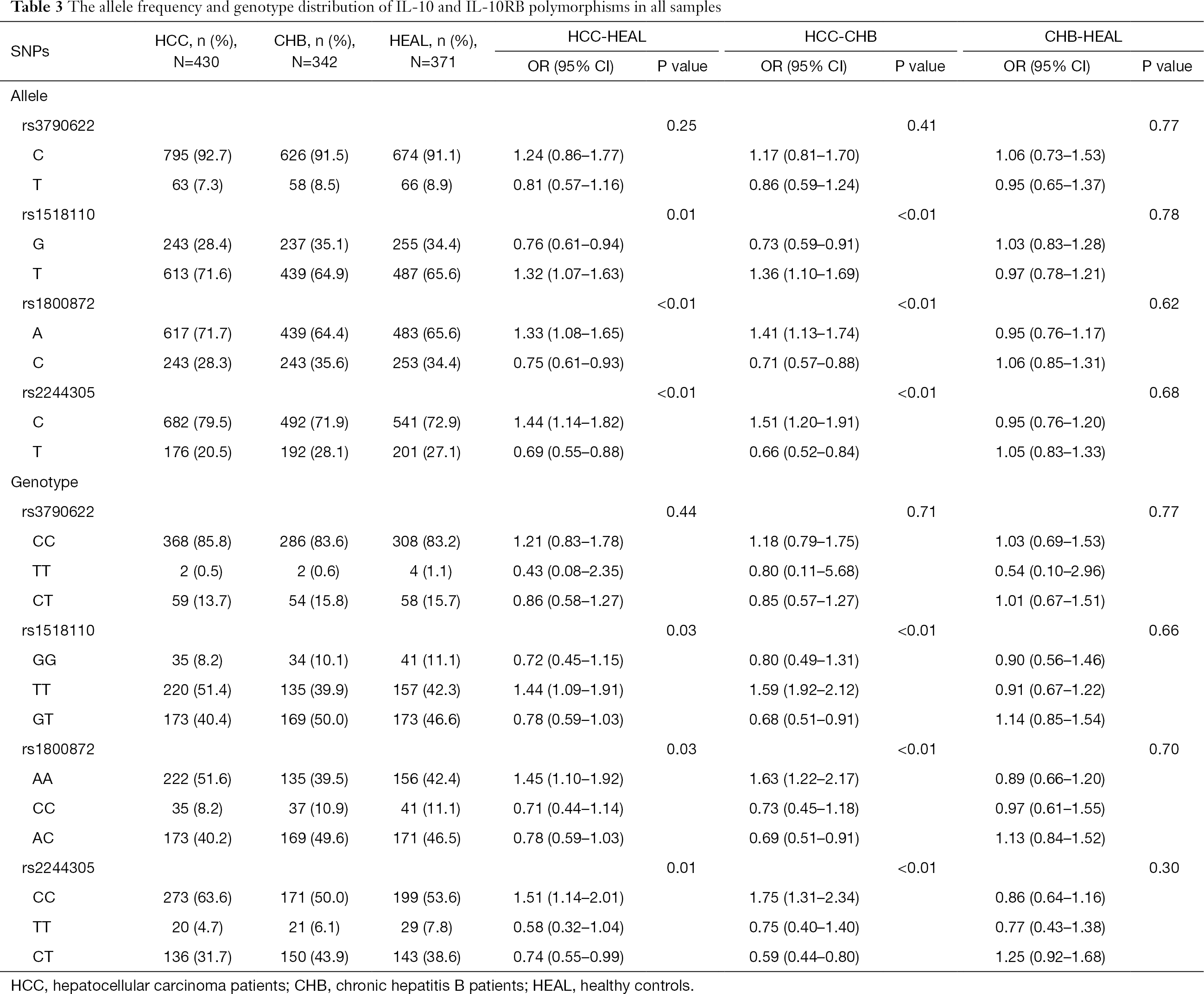 Considering the genotypes or alleles of rs1518110, rs1800872 and rs2244305 were significantly correlated with HCC susceptibility, we further analyzed the genotypic effects of the four SNPs in 234 HCC cases with detailed clinical information, including age, gender, history of alcohol abuse and smoking, tumor size, tumor number, Barcelona Clinic Liver Cancer (BCLC) stage, the degree of hepatic cirrhosis, distant metastasis, lymph node metastasis and recurrence (Table 4). In the stratified analysis, we observed significant correlations between the GG/GT genotypes at rs1518110 and the CC/AC genotypes at rs1800872 with individual smoking habit and HCC risk (P<0.001) and with an increased rate of tumor recurrence in HCC patients (P<0.01). In HCC patients, the CC genotype of rs2244305 was significantly correlated with multiple tumor number, B or C BCLC stages, distant metastasis and lymph node metastasis (P<0.01, P<0.01, P=0.01, and P=0.02, respectively). 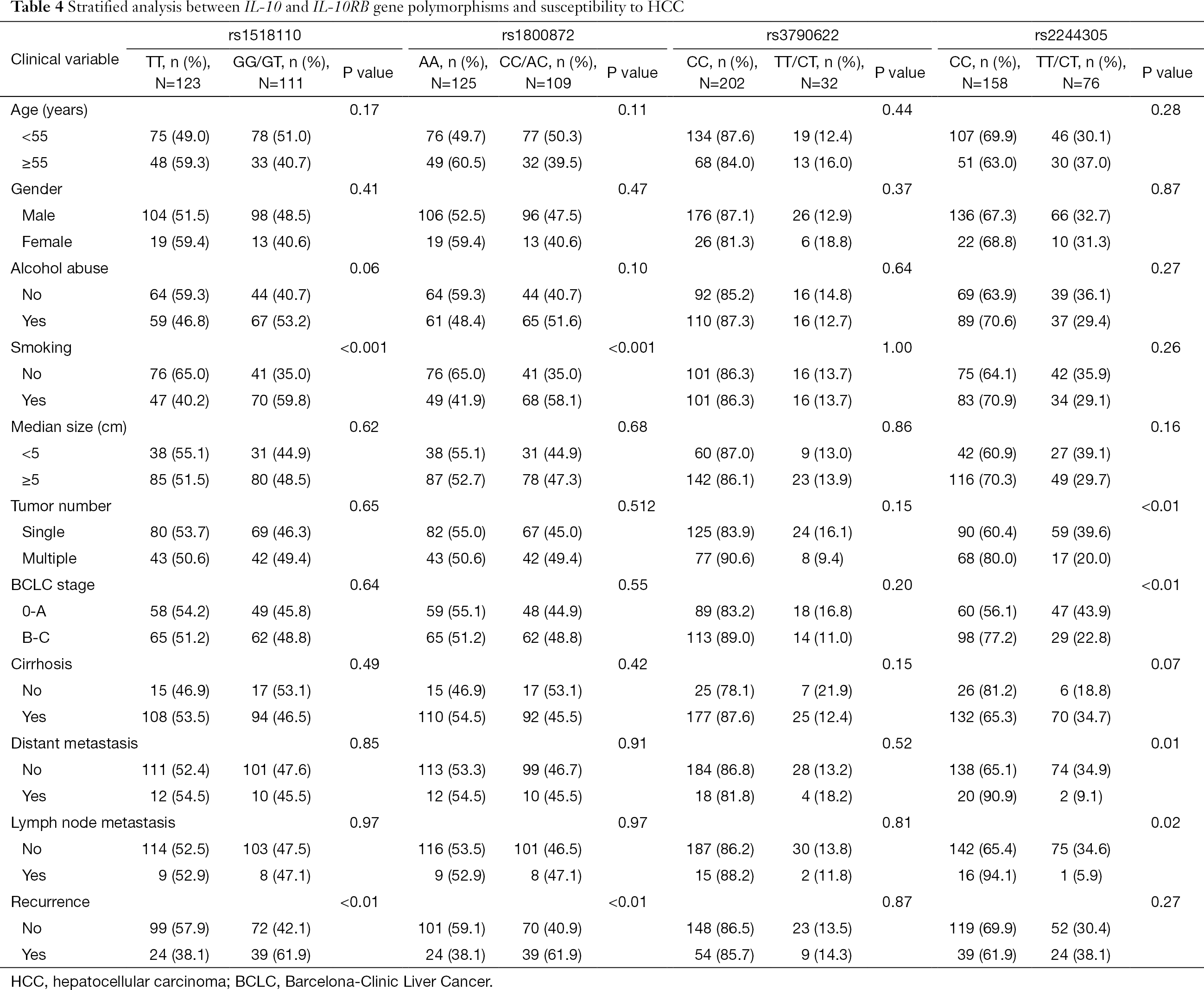 IL-10 and IL-10RB are regarded as important anti-inflammatory cytokines in humans and are significant for maintaining immune system balance by down-regulating the pro-inflammatory response (16). IL-10 potentially has dual biological functions in the promotion and inhibition of cancer and may regulate tumor susceptibility and development (17). Studies of IL-10 gene polymorphisms revealed that IL-10 SNPs are related to cancer susceptibility and affect the severity and progress of the disease as well as the IL-10 expression level (7). Several studies have investigated the associations of polymorphisms in IL-10 and its receptor IL-10RB with cancer susceptibility and prognosis (11). Recently, a correlation between polymorphisms in the IL-10 gene promoter region and a variety of tumors, including HCC, has been reported (18,19).

In our study, compared to the healthy control and CHB groups, the T allele frequency of rs1518110, the A allele (rs1800872) and C allele (rs2244305) have a significantly higher frequency in HCC patients. The distribution frequencies of the TT genotype in SNP rs1518110, the AA genotype in SNP rs1800872 and the CC genotype in SNP rs2244305 were higher in HCC patients than in CHB patients. It was hypothesized that patients with the IL-10 rs1518110, rs1800872 and rs2244305 polymorphisms were possibly susceptible to HCC. However, the allele and genotype frequencies of the IL-10 gene SNP rs3790622 among the HCC, healthy control and CHB patients showed no significant difference. Therefore, it is supposed that IL-10 gene SNP rs3790622 may not be associated with the outcome of hepatitis B-related HCC in the Chinese Han population. In the previous studies, IL-10 gene polymorphisms were important for HBV infection-induced immune response. The IL-10/-592 C/C and IL-10/1927 A/A genotypes are related to a higher risk of HCC (20). IL-10 haplotype 2 (IL10-ht2) significantly up-regulated the risk of developing cirrhosis and HCC in chronic HBV-infected patients (21). Our results also showed that the allele and genotype frequencies of four SNPs (rs3790622, rs1518110 and rs1800872 in the IL-10 gene and rs2244305 in the IL-10RB gene) in CHB group were not different from those of healthy control groups. This is compatible with a previous study that IL-10 promoter polymorphisms were uncorrelated with HBV infection prognosis (22). It is, therefore, clear that IL-10 gene SNPs are strongly associated with HCC.

The allele and genotype frequencies of rs1518110, rs1800872 and rs2244305 in CHB patients and healthy controls have no difference. However, the allele and genotype frequencies of these SNPs were significantly different between the HCC patients and the healthy controls as well as the CHB group. It is supposed that mutations at the SNP sites can affect IL-10 and IL-10RB protein expression, T-helper 1/2 cell differentiation and the balance of immune mechanisms. This suggests that IL-10 and IL-10RB may play a role in inhibiting anti-inflammatory cytokine reduction, delaying HBV-related inflammatory responses and inducing HCC, which may be caused by a cumulative effect of these processes.

Ethical Statement: The study was approved by The Center Ethics Committees of Henan Cancer Hospital and written informed consent was obtained from all patients.