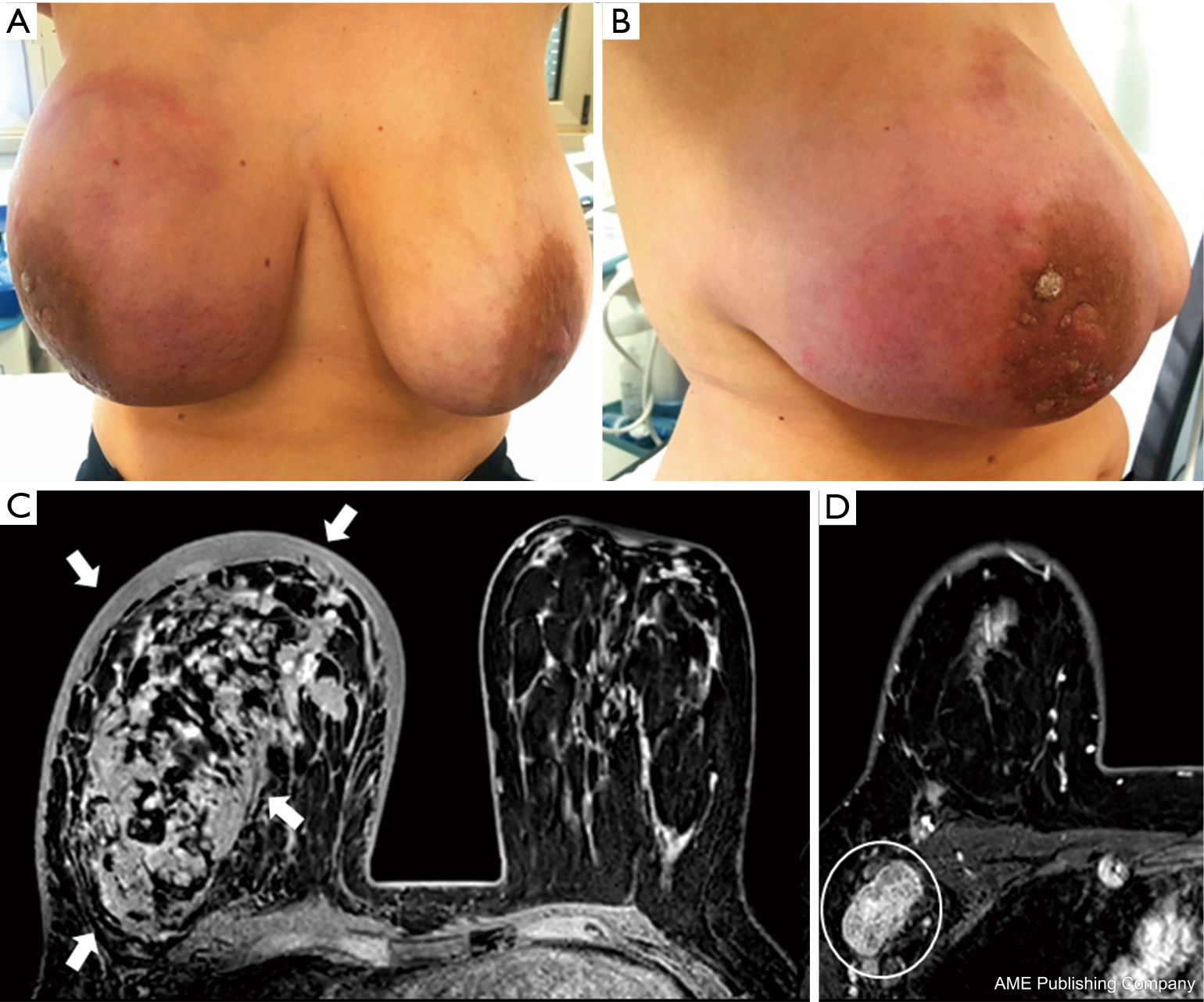 Nevertheless, data emerging from National Cancer Database and the CONCORD high-resolution study reveal that approximately 8.5% of American and 4% of European patients still present with locally advanced breast cancer (LABC) (2); estimates that can reach up to 90% newly diagnosed breast cancers in low- to middle-income countries (3).

NACT rationale, is to offer effective systemic treatment while surgically down staging the cancer at presentation, potentially rendering operable patients who had been considered inoperable at the time of their diagnosis, as well as facilitating breast conserving surgery (BCS) when patients had initially needed mastectomy, with reported response rates ranging from 30% to 70% (10-15).

Besides the chance to pursue breast conservation, NACT also offers the potential advantage of gauging the sensitivity of the tumor to systemic therapy (16).

Moreover, pathological complete response to systemic therapy (no residual invasive disease in the breast and axilla regardless of the presence of residual in situ carcinoma) is a prognostic marker for long-term survival, especially in tumors with negative prognosis, such as TNBC disease (16,17-19).

Finally, in operable patients, NACT may offer the advantage over the adjuvant approach of anticipating administration of systemic treatment with a potential effect on systemic micrometastatic disease (16,18).

Despite these brilliant results of NACT (Figure 2), that can potentially lead to a significant decrease in mastectomy rates, several national surveys reported lower BCS than expected. 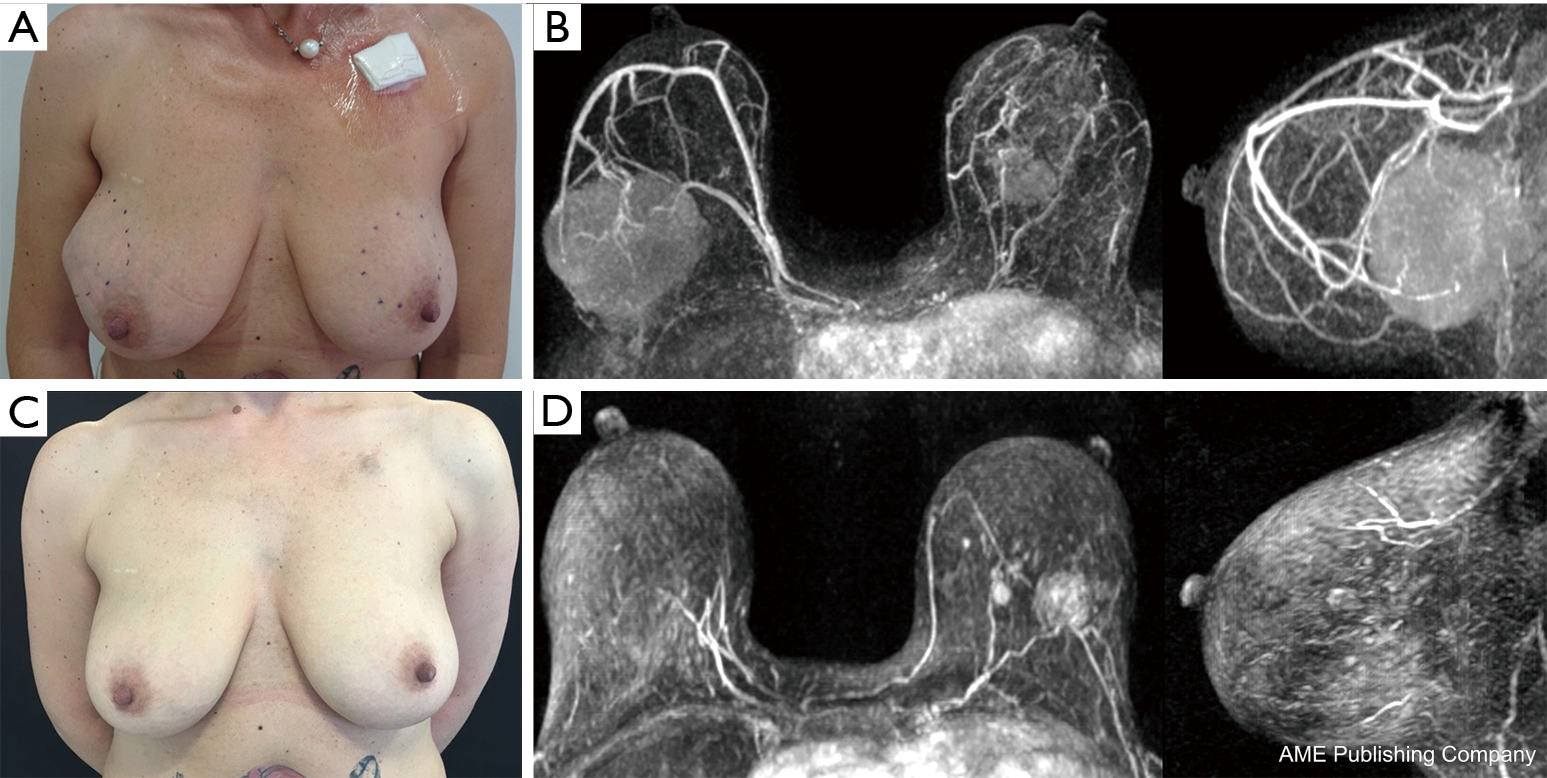 In 2012, the European Society of Mastology (EUSOMA) reported the results from the EusomaDB survey (a prospective European database), which integrates data from European breast units located in Germany, Switzerland, Belgium, Austria, and Italy, reporting a mastectomy rate of 25.1% (20).

But a wide between-facilities variation was recently evidenced by a French survey, with mastectomy rates between 15.0% and 45.7% (21).

In the USA, the multicenter Surveillance Epidemiology and End Results (SEER) study, which covered approximately 28% of the U.S. population, confirmed in 2010 a decreasing trend in mastectomies (23) but subsequent reports revealed higher rates (24,25) and in 2015, a nationwide study on 2.7 million patients, conducted by the American Cancer Society and the American College of Surgeons Commission on Cancer finally revealed a mastectomy rate of 35.5% (26).

The lack of increased rates of BCS may be related to several difficulties:

After NACT, magnetic resonance imaging (MRI) has been proposed to have a role in guiding breast cancer surgery by measuring the size of residual tumor and has been shown to have highest sensitivity for detecting residual disease (27).

Currently, the role of MRI, despite having this highest correlation co-efficient to final pathology, may still underestimate and overestimate residual tumor size, leading to surgical over and under treatment.

A recent metanalysis confirmed that both over- and under-estimation by MRI are possible, and observed limit of agreement (±3.8 cm) shows that errors within that range, that would be crucial for the choice of treatment are still possible and must be carefully avoided (28) by MRI skilled radiologists.

Boughey et al. reported that in patients with T2 or T3 tumors, NACT lead to significantly less resected tissue than adjuvant chemotherapy, observing no change in rates of re-excision and thus leading to the conclusion that it is not necessary to excise the entire pre-chemotherapy volume of tissue (29).

Nevertheless, many breast surgeons routinely perform surgery based on pre-treatment characteristics rather than more appropriate post-treatment imaging and clinical results. This commits patients to suboptimal cosmetic results or mastectomy.

In his systematic review, Hamelinck et al. reported that 46% of breast cancer patients prefer mastectomy versus BCS, in an attempt to reach better oncologic outcomes (30).

This observation is a clear evidence that information between patient and clinicians is frequently lacking.

Lack of training in breast conserving procedures, such as oncoplastic surgery (OS) was identified in several studies worldwide, determining a high variability among specialized breast centers and general hospitals (31-33).

In Ontario, informal OS training opportunities exist; however, these are not well advertised or well known, leaving interested surgeons to seek out training in a piecemeal fashion (34).

Surgical management of breast cancer has undergone a continuous and dramatic evolution over the past 4 decades, trending away from radical procedures toward more breast-conserving techniques, that provide patients with greater aesthetic satisfaction (36).

BCS followed by radiotherapy was confirmed by many randomized studies and meta-analyses as an alternative to mastectomy, reaching similar prognostic results while preserving the shape of the breast.

The traditional approach to BCS consists of incision placement over the tumor, resection to clinically and/or radiographically clear margins, and closure of skin without parenchymal closure, thus leaving a seroma cavity (37-40).

While this may provide adequate cosmesis in the immediate postoperative period, over time the seroma absorbs, leaving a breast contour deformity, which is exacerbated by adjuvant radiotherapy (41).

Given these conditions, poor cosmesis is verified in up to 40% of BCS patients and has been shown to significantly affect patients’ quality of life and psychosocial outcomes (44-47).

In an attempt to optimize the balance between oncologic results and cosmetic outcomes, new surgical procedures that combine the principles of surgical oncology and plastic surgery have been introduced in recent years. 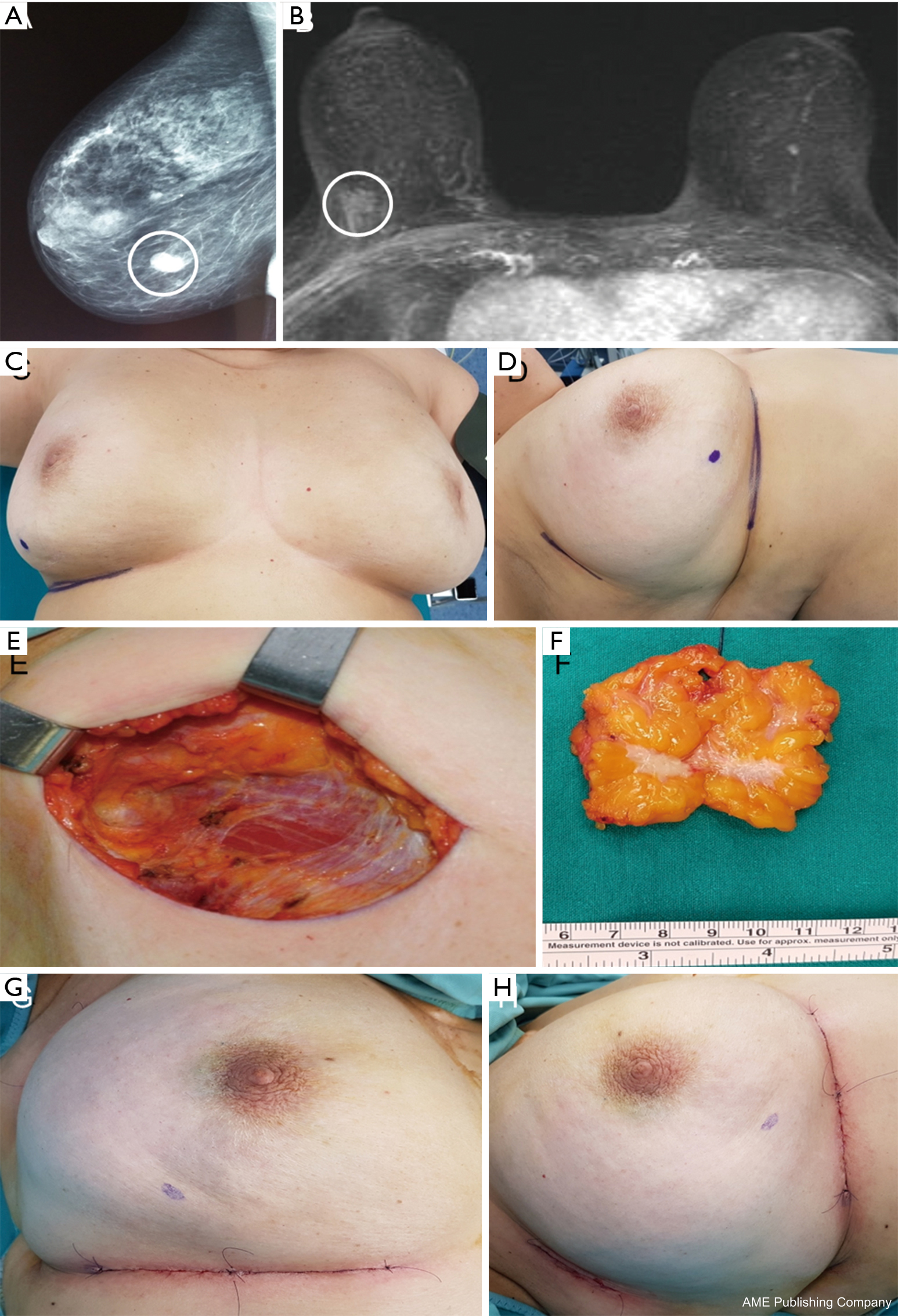 Initial studies on OS focused primarily on cosmetic results. Only a few large-scale studies have evaluated survival, recurrence rates, and other measures of oncologic safety (54-59).

As a consequence, OS was firstly established as a good compromise between larger excisions and good cosmetic results, but limited evidence hampered OS to become the oncologic leading solution for breast conserving treatment of breast cancer.

Something started to change 3 years ago, when in 2014, Losken and colleagues published a metanalysis that compared 24 OS papers (3,165 patients) versus 20 BCS papers (5,494 patients) reporting outcomes of both invasive and in situ breast cancer cases (60).

Their analysis evidenced a larger average tumor size in the OS group [2.7 cm in OS group versus 1.2 cm in breast conservation therapy (BCT) group] with a significant reduction in positive margin rate defined according to the American Society of Clinical Oncology (ASCO) and the American Society for Radiation Oncology (ASTRO) guidelines, as tumor cells at the cut edge of the surgical specimen (12% in OS group versus 21% in BCS group) (61,62).

In patients with locally advanced breast cancer who received NACT, the evidences scenario is even more complex, as literature reporting the use of BCS and OS is limited and confounding.

Recent evidences seem to refute initial data. In their 2017 metanalysis, Zhou and colleagues reviewed 2000–2015 literature selecting eight trials, with a total of 3,215 patients analyzed: 1,361 receiving BCS and 1,854 who underwent mastectomy (68). At 5 years follow-up, the prevalence of local recurrence was 9.2% in the BCS group, versus 8.3% in the mastectomy group and overall survival was significantly higher in the BCS group, confirming response to NACT a major prognostic factor.

At presentation, 25.8% were T3/T4 tumors and 44.8% had metastatic lymph node disease. Patients were initially treated with anthracycline, cyclophosphamide and 5-fluorouracil (5-FU) with or without docetaxel. Regarding surgery, the average excised tumor size was similar for both groups (40 mm) but the authors confirmed greater specimen volumes excised in patients undergoing OS. At a median follow-up of 46 months, local recurrence rate was 5% in BCS group versus 4% in OS group. No differences were observed regarding distant recurrence or survival.

Recently, Vieira et al. performed a matching case-control study, evaluating results of 78 patients with LABC who underwent NACT (doxorubicin-cyclophosphamide regimen followed by paclitaxel regimen). After completion of neoadjuvant treatment, 26 patients received OS, whereas 52 BCS. The authors reported an average size tumor of 5.25 cm (88.5% larger than 3 cm). The clinical and pathological group characteristics were similar, except the weight of surgical specimens and surgical margins, which were higher in OS group. At 67.1 months of follow-up, local recurrence was 11.5% in BCS group, versus 7.7% in OS group. The authors reported no difference in locoregional recurrence, overall survival and disease specific survival (70).

Recent literature demonstrates the benefits of OS, extending far beyond the mere reduction in poor cosmetic results, to the possibility of obtaining wider excisions with similar oncologic results observed in patients submitted to classic BCS and mastectomy. Future studies with longer follow-up and standardization of data are needed. Furthermore, what emerges from LABC literature is an imperative need of multidisciplinary breast centers worldwide diffusion, where breast-dedicated oncologists, radiologists and OS trained surgeons can offer patient-centered updated diagnostics, treatment protocols and surgical solutions, especially in a very delicate scenario, such as LABC treatment.