Uterine leiomyoma, a benign tumor, has an incidence rate of 30–50% (1) for women of a reproductive age, which increases to 70–80% when women are in their fifties (2). Generally, uterine leiomyoma is a major cause of hysterectomy and myomectomy. Uterine leiomyoma usually causes a cascade of gynecological damage, including menstrual abnormalities, recurrent pregnancy loss, pelvic pressure, etc. (3). Despite the high incidence of uterine leiomyoma, we still know little about its underlying etiology.

Previous studies have revealed that uterine leiomyoma originates from a myometrial cell transformation (4,5), while other studies have shown that the genes capable of encoding estrogen and progesterone receptors have been identified in the initiation and progression of leiomyoma (6-8). In some research, the increased risk of leiomyoma has been linked with genomic instability (9-11), implying microRNA (miRNA) potentially has a key role in leiomyoma (12).

MiRNAs, a type of small RNA with a length of around 20 nucleotides, might have a part in regulating gene expression. When binding with the 3'-untranslated region (3'-UTR) of target mRNAs in a sequence-specific way, miRNAs can induce target mRNA cleavage and degradation or inhibit translation by forming an RNA-interference-induced silencing complex (RISC) (6,7). miRNAs are also involved in multiple biological processes including cell growth, proliferation, differentiation and apoptosis. The majority of genes encoding miRNAs coincide with these cancer-related genomic regions, suggesting the potential role of miRNAs in tumorigenesis (7). There have been a few reports discussing miRNA dysregulation in uterine leiomyoma (8,9), but knowledge concerning the associations of miRNA functions and the therapy of uterine leiomyoma is still limited.

The levonorgestrel intrauterine system (LNG-IUS) is an intrauterine anti-fertility system, commonly used for uterine leiomyoma treatment. The LNG-IUS remedy has been found to reduce the size of uterine leiomyoma and relieve menstrual bleeding (2), yet the underlying mechanism still needs to be explored in depth. Here we aim to systematically analyze the miRNA expressions for the LNG-treated uterine leiomyoma cells in vitro. Hopefully, these results will facilitate a more comprehensive understanding of the biological mechanisms in the LNG-IUS remedy and offer new insights into effective clinical practice.

Inclusion criteria: patients with symptomatic leiomyomas, patients with regular cycle, patients who did not receive any hormone treatment for at least 3 months before hysterectomy, Uterus leiomyoma tissues were collected from 10 patients (mean age: 43.5±3.0 years old), who were scheduled to undergo hysterectomy. Surgery was performed 3 to 10 days after the cessation of menstruation. All of the leiomyomas selected for this study were 3–5 cm in diameter, and the tissues were all confirmed as uterine leiomyoma without degeneration. Leiomyoma cells were isolated using the digestion and tissue adherence method, and confirmed by the cell immunofluorescence with anti-α-smooth muscle actin antibody (5). The collected cells were embedded in Dulbecco’s Modified Eagle’s Medium (DMEM) (100 U/mL streptomycin, 100 U/mL penicillin, 10% heat-inactivated fetal bovine serum), cultured at 37 °C with 5% carbon dioxide under sustained humidity. The medium was replenished after digestion with trypsin, cultured for 24 hours (h) and then replaced every 48 h. Cell passage was performed when cell density went up to 95%. All the subsequent experiments were conducted within 6 generations from the primary leiomyoma cells. This study and related use of the patients’ samples were approved by the Ethics Committee of the Nanjing Maternity and Child Health Care Hospital Affiliated with Nanjing Medical University {IRB number: [2014] 72}, and all the participants gave informed consent before taking part.

A CCK-8 assay was performed to evaluate the effect of LNG on the UtLMC activity. To begin, 5,000 cells were seeded per well in a 96-well plate. Then, cells were treated with different doses of LNG (0, 5, 10, 15, 20, 25 ng/mL) (culture medium with equal amount of DMSO was taken as a solvent control) for 72 h. At last, CCK-8 detection agent was added, and the absorbance was read at 490 nm. The activity of the solvent control group was assumed to be 100%.

The total RNA of the cultured cells was isolated by miRNeasy Mini Kit (QIAGEN, Izasa, Barcelona, Spain), with the purity and concentration measured by NanoDrop ND-1000 (NanoDrop Technologies, Wilmington, DE) and integrity examined by formaldehyde gel electrophoresis. The isolated total RNAs were fractionated and cleaned up using flashPAGE Fractionator and reagents (Invitrogen) (13) to extract miRNAs. Twenty-five µg of total RNA was loaded for flashPAGE purification. Targeted RNAs (~40 nucleotides) were tracked via a dye for isolation. Agilent 2100 Bioanalyzer (Agilent Technologies, Foster City, CA, USA) was employed to analyze the quality, yield and size of miRNA fractions and total RNA.

A miRNA microarray analysis was performed via LC (Houston, TX, USA) in 3 independent groups: a solvent control group, an LNG-treated cell group (14), and a group of positive control (Ambion) composites of chemically synthesized oligoribonucleotides. miRNAs were labelled at 3’ amine-modified tails after isolation using the mirVana miRNA array labelling kit (Invitrogen) and coupled with Cy5 post-labelling reactive dye; then, a 3× miRNA hybridization buffer (Ambion) was added and heated at 95 °C for 2 min. The Cy5-labelled samples were cleaned using a post-labelling miRNA clean up kit, eluted, and stored at −70 °C or analyzed by hybridizing to miRNA arrays. On the micro-fluidic chip, each detection probe consisted of a chemically modified nucleotide sequence complementary to the target mRNA (from miRBase, http://microrna.sanger.ac.uk/sequences/v8.2) or other RNA control sequences, and a spacer segment of polyethylene glycol to extend the coding segment away from the substrate. After this, the mirVana miRNA Bioarray slides (Ambion) were placed into hybridization chambers (Corning Incorporated Life Sciences, Acton, MA) and 10 µL of miRNA were added to 20 µL of hybridization buffer mixture on the array slide under the Bioarray LifeSlip. The chambers were sealed and incubated in 42 °C water bath for 12~16 h. Each probe on the Bioarray slide was printed in duplicate with 20 positive and 100 negative controls.

The potential targets of the differentially expressed miRNAs in the LNG-treated cells were predicted by the Target-Scan, PicTar, and microRNA.org programs with the default setting. Intersections of these miRNA target predictions were selected as miRNA targets. The MAS3 program (http://www.bioinfo.capitalbio.com/mas3/) was adopted to investigate the functions of the potential miRNA-targeted genes, in order to explore the biological functions for these candidate miRNAs. The Gene Ontology (GO) and Kyoto Encyclopedia of Genes and Genomes (KEGG) were taken as annotation databases.

Total RNA (500 ng) was reverse-transcribed using the TaqManH MicroRNA Reverse Transcription kit (Applied Biosystems, Madrid, Spain), at 16 °C for 30 min, 42 °C for 30 min and 85 °C for 5 min, with the stem-loop primers provided by Ruibo (Guangzhou, China). The miRNA-specific cDNAs produced were amplified by PCR (TaqMan Universal PCR master mix from Applied Biosystems, Madrid, Spain; primers from Ruibo). qPCR was performed on the ABI 7900 PCR System with SYBR Green (Applied Biosystems, USA), at 95 °C for 10 min, 40 cycles for 15 s and 60 °C for 1 min, and replicated 3 times. The endogenous control was U6 small nuclear RNA. The relative expression was calculated by the 2−ΔΔCt method (15).

Microarray data were first subtracted from the background and then normalized by a LOWESS filter (Locally-weighted Regression) for the two-color experiments. Ratios for the 2 sets of detected signals (log2-transformed, balanced) and p-values of t-tests were calculated. The significance threshold was set at P<0.05, and the false discovery rate (FDR) was further calculated. The data was analyzed using the SPSS Graduate Pack 20.0 statistical software package (SPSS, Chicago, IL, USA). Intergroup differences were investigated by one-way analysis of variance. The significance of the GO term enrichment and the pathway correlated to the conditions, was determined by P values, in terms of EASE-score, Fisher P value or Hypergeometric P value.

Inhibition of LNG on the viability of uterus leiomyoma cells

We performed a CCK-8 assay to evaluate the influence of LNG on uterus leiomyoma cell activities. The data showed that LNG (≥10 ng/mL) could significantly reduce cell viability, compared to the solvent control group. Also, the inhibition of LNG on cell viability appeared to be in a dose-dependent manner (Figure 1). 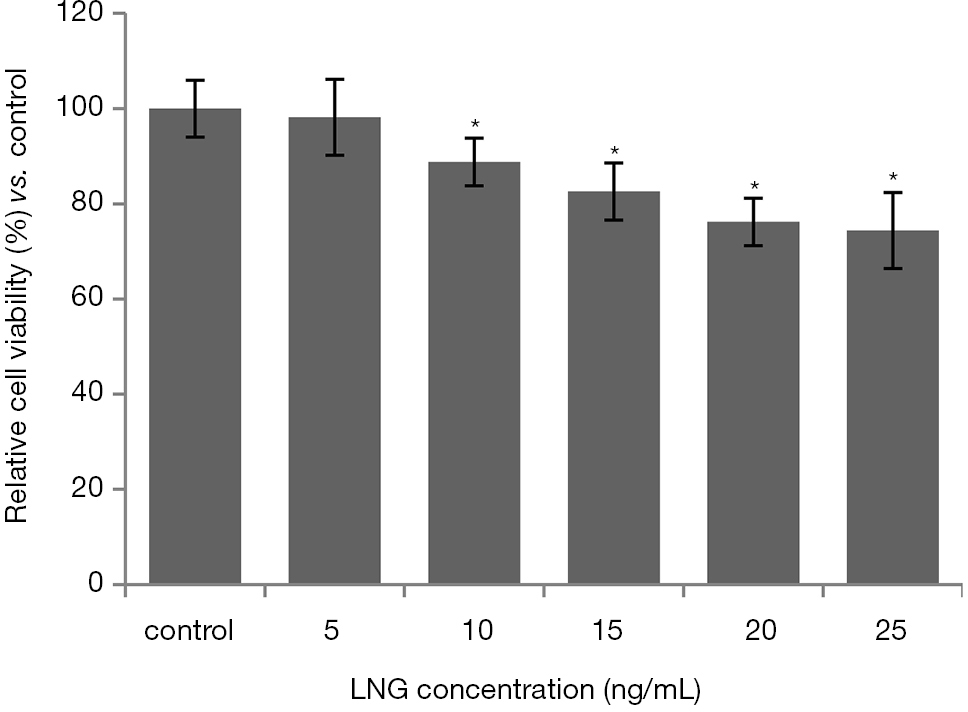 Figure 1 Effect of LNG on cell viability in uterine leiomyoma cells. Cells were treated with different concentrations of LNG (0, 5, 10, 15, 20, and 25 ng/mL) for 72 h before CCK-8 treatment. The resulting changes in absorbance were read at 490 nm in a plate reader and expressed as a percentage of the control absorbance in the absence of any drug. The results showed that LNG inhibited the cell viability of uterine leiomyoma cells in a dose-dependent manner. Each assay was performed with 3 repetitions. LNG, levonorgestrel. 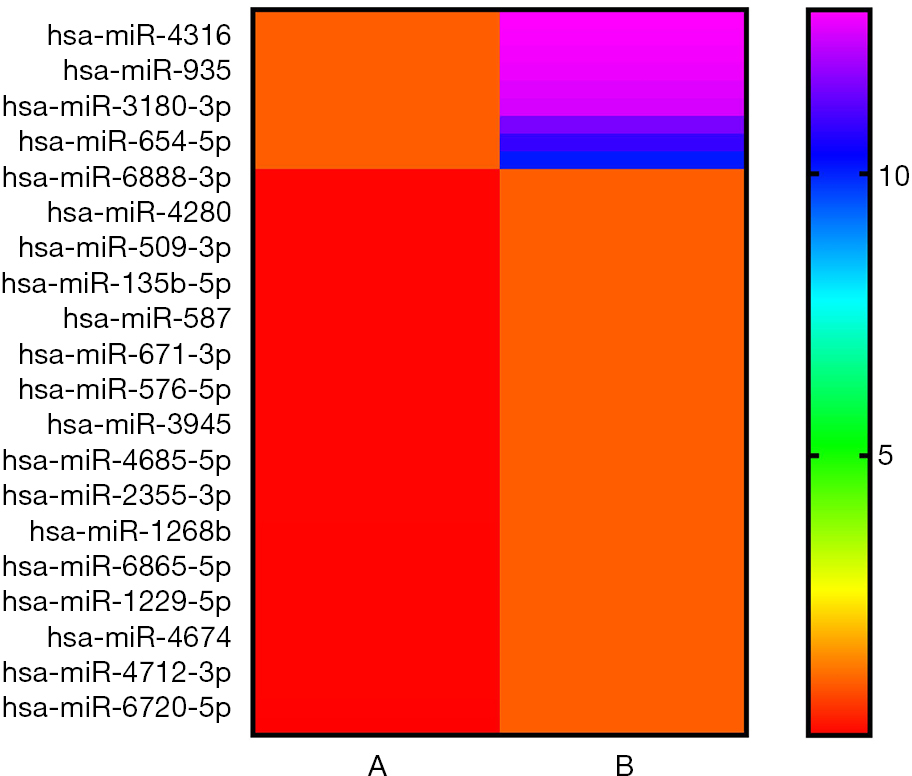 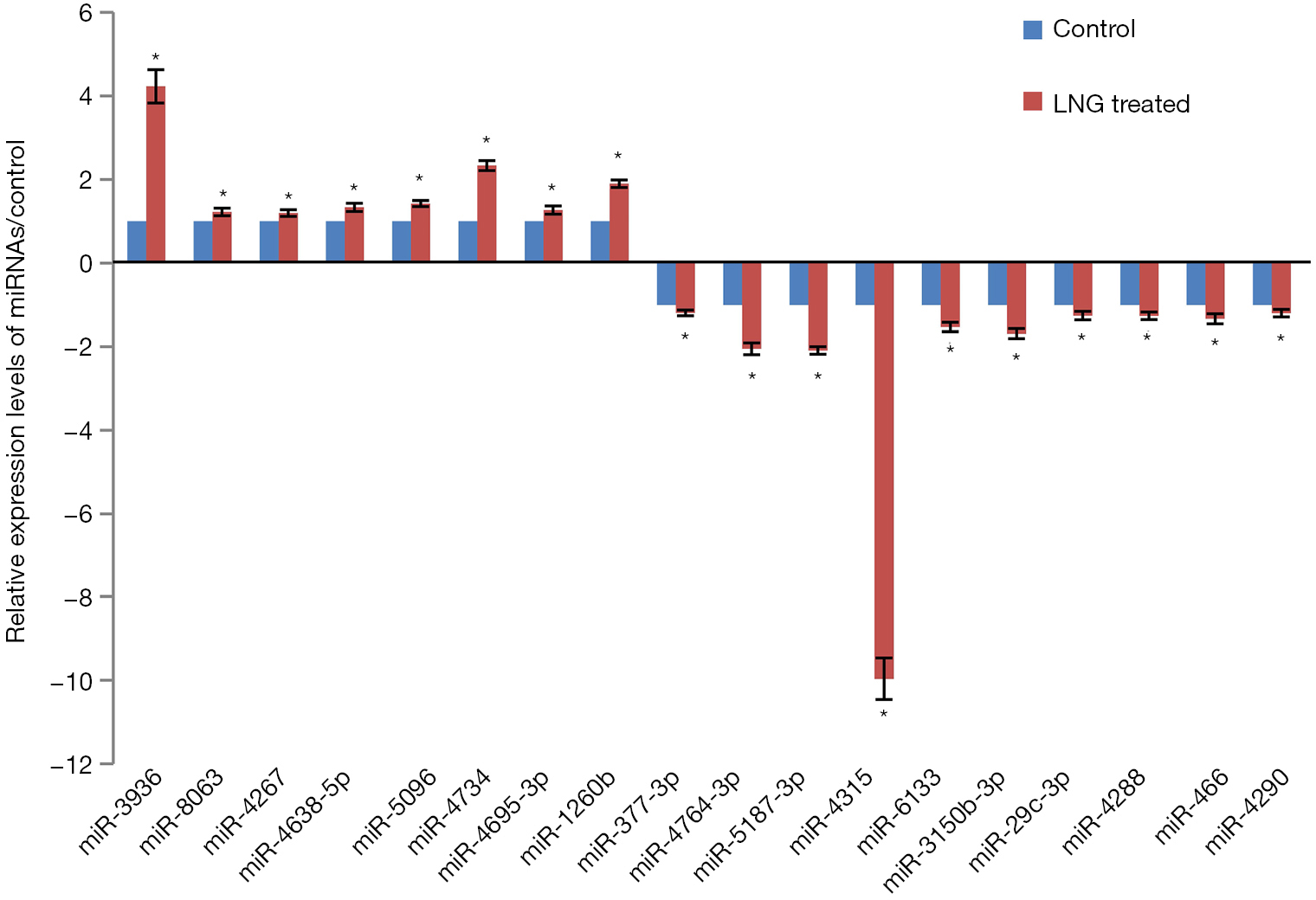 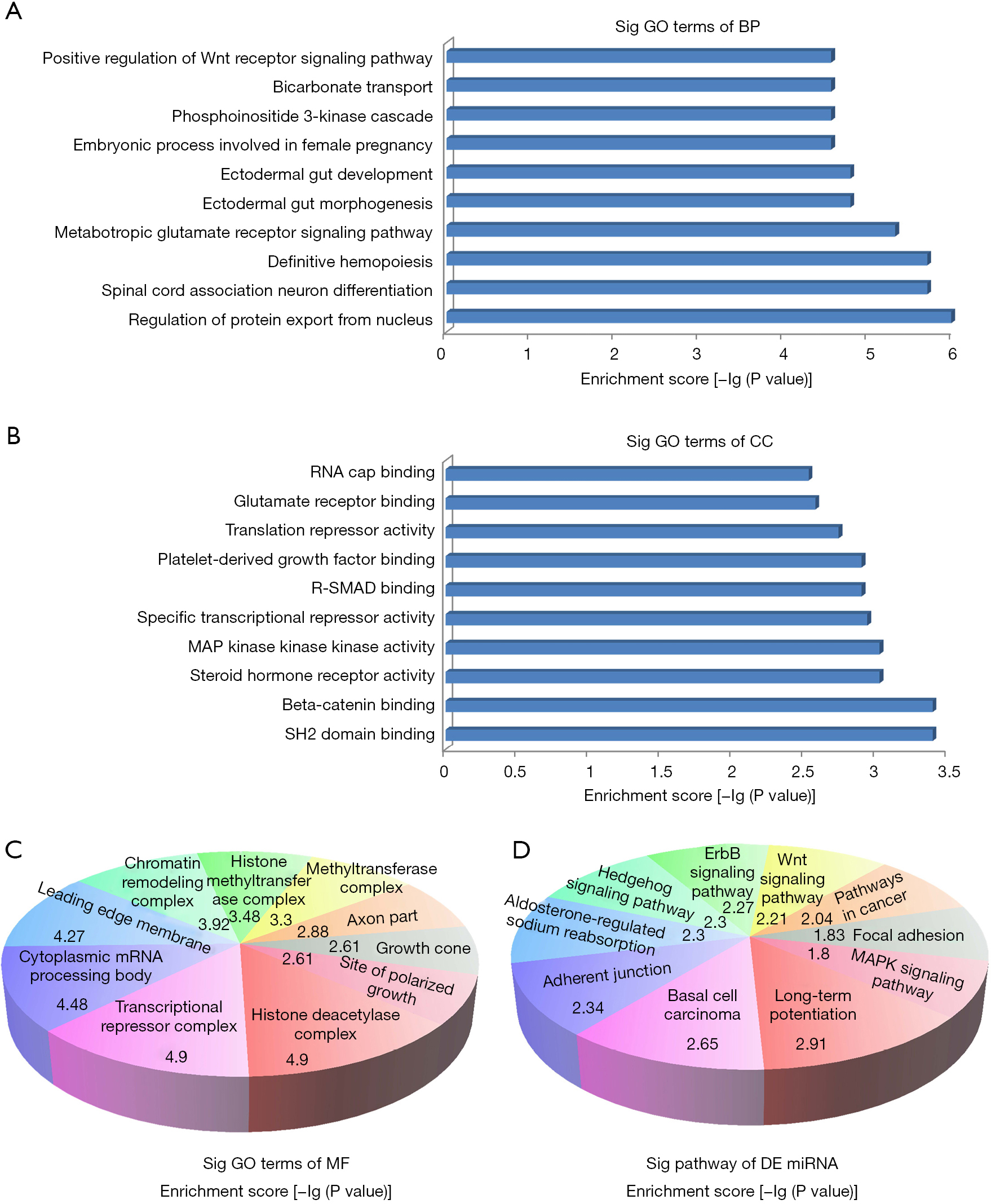 In the past decades, uterine leiomyoma has become the most common female reproductive system tumor. Usually, it is linked to ischemia, hypoxia, cellular injury, and myofibroblastic tumors, and can result in the unexpected expression of profibrotic, proinflammatory, and local angiogenic mediators (15-19). As advances in biological technology progress, efforts have been made to explore the mechanisms underlying the initiation and development of uterine leiomyoma. Non-coding RNAs have been proven to regulate protein coding gene expression and control some biological processes (20,21). MiRNA is one type of non-coding RNA, with its dys-regulation involved in various biological processes, including fibrosis, inflammation, and tumorigenesis (22,23). It has been confirmed that miRNAs are differentially expressed in the leiomyoma tissues compared with those expressed in normal tissues, but few miRNAs have been further investigated in relation to their function in regulating uterine leiomyoma (24-27). Therefore, our knowledge concerning the miRNAs involved in the leiomyoma therapy remains incomplete.

We validated the miRNA expression levels through qRT-PCR and replicated 13 miRNAs related to LNG treatment in uterine leiomyoma cells (Figure 3). Recent studies demonstrated that miRNAs could be the biomarkers or therapeutic targets for many diseases. In order to classify the potential functions of these 13 miRNAs, we carried out pathway analysis. Pathway analysis suggested that these gene products were mainly involved in the regulation of the Wnt receptor signaling pathway, bicarbonate transport, and phosphoinositide 3-kinase cascade (Figure 4A); these conclusions are also supported by other studies (28,29). Meanwhile, in line with Borahay et al.’s research (30), several KEGG signaling pathways were also involved, for example, long-term potentiation, basal cell carcinoma, adherens junction, aldosterone-regulated sodium reabsorption, hedgehog signaling pathway, ErbB signaling pathway, Wnt signaling pathway, pathways in cancer, focal adhesion, and the MAPK signaling pathway (Figure 4D).

There are still some limitations in the current study. First, the detailed molecular mechanisms have not been explored deeply. Second, the effects of other treatment modalities on the miRNAs expression have not been identified and compared with LNG treated leiomyoma cells. Without these comparisons, more significant insights into optimizing current therapy strategies cannot yet be proposed. Therefore, we will continue this work in future research.

We would like to thank the KangChen Bio-tech LTD (Shanghai, China), especially Feifei Xu (PhD) and Yajie Zhang for the miRNA microarray analysis.

Ethical Statement: This study and related use of the patients’ samples were approved by the Ethics Committee of the Nanjing Maternity and Child Health Care Hospital Affiliated with Nanjing Medical University {IRB number: [2014] 72}, and written informed consent was obtained from all patients.