Nasopharyngeal carcinoma (NPC) is a disease in which malignant (cancer) cells are found in the tissues of the nasopharyngeal. It is one of the most prevalent malignancies in southern China, Southeast Asia, the Arctic, and the Middle East/North Africa (1,2). Atypical symptoms and hidden sites in earlier stage of nasopharyngeal carcinoma are the main causes of a high misdiagnosis rate. Thus, it has been diagnosed already in middle or late period (3). With the wide application of tumor markers (TMs) in nasopharyngeal carcinoma, exploring a highly sensitive and specific biomarker for early diagnosis of NPC is extremely important to improve the survival rate.

There are many TMs such as squamous cell carcinoma antigen (SCCAg), cytokeratin 19 fragment (CYFRA21-1), neuron specific enolase (NSE), alpha-L-fucosidase (AFU), carbohydrate antigen (CA)72-4, CA125, CA19-9, carcinoembryonic antigen (CEA) and ferritin (FER) were the most commonly used in the clinic. Besides, CYFRA was also reported to be important significance in the differential diagnosis for the nasopharyngeal carcinoma and benign disease (4,5), and was used as a better TM than SCC antigen for detection of NPC (6). While, whether the other TMs can also be used for diagnosis of NPC, there is still unknown. Logistic regression analysis and the decision tree were used to screen TMs. Decision tree is a novel data processing method, which has been applied to epidemiological studies (7,8).

The objective of this study was to analyze the potential diagnostic value of serum TMs for distinguishing of early-stage NPC from various benign nasopharyngeal diseases (BND).

This study was approved by the institutional review board (IRB) of hospital, and a signed consent form was obtained from each patient. Between January 2012 and October 2017, 202 newly diagnosed NPC patients and 72 BND patients were finally enrolled by excluding missing data. All patients satisfied the inclusion criteria: (I) clinical and pathological data were completely recorded. (II) All cases were proved by pathology and classified according to World Health Organization (WHO) 2005 classifications and AJCC 7th edition guidelines of TNM classification, respectively (9,10). (III) There is no other malignant tumor. (IV) Postoperative pathologic type of nasopharyngeal carcinoma: keratinizing squamous cell carcinoma (type I); and nonkeratinizing carcinoma, characterized as differentiated (type II) or undifferentiated (type III). BND, composed of nasal polyps and nasopharyngeal chronic inflammatory. (V) TMs were measured within 24 h–3 d before radiotherapy and chemotherapy. All patients were first diagnosed without any treatment before.

The turnaround time from specimens collecting from patients to assay detection was within 2 hours. The samples were centrifuged for 15 minutes at 3,000 g. CA72-4, CYFRA21-1, NSE, CA125, CA19-9, CEA and FER levels were measured by a cobas e601 analyzer (Roche, USA). The serum levels of SCCAg was detected by an ARCHITECT i2000 immunoassay analyzer (Abbott, USA). AFU was measured by an automatic biochemistry analyzer ADVIA 2400 analyzer (Siemens, USA).

The normal distribution test was conducted in the variables by Shapiro-Wilk method. As the TM levels were not normally distributed, the results of the TM level were reported as median. The differences in serum levels of TMs were analyzed using non-parametric Mann-Whitney U test. The enumeration data were performed with the chi-square test. The sensitivity, specificity and diagnostic cutoff levels were calculated by receiver operating characteristic (ROC) curve. Levels of TMs were analyzed by logistic stepwise regression analysis (MASS packages) and the decision tree CTree (party packages). All statistical analyses were performed using R (version 3.3.2), P<0.05 was considered to be a statistically significant.

The characteristics of 202 NPC patients and 72 patients with BND are shown in Table 1. The male to female ratio was 153:49 (3.12:1) in patients with NPC, and another group is 50:22 (2.27:1). Median age in NPC patients was 51 (range, 16–83) years. The median age of patients with BND was 50 (range, 14–88) years. NPC samples included 179 cases of non-squamous cell carcinoma with undifferentiation and 25 cases of non-squamous cell carcinoma with differentiation. BND samples included nasal polyps (n=38) and nasopharyngeal chronic inflammatory (n=34). There was no difference on two groups by age, gender (P>0.05). 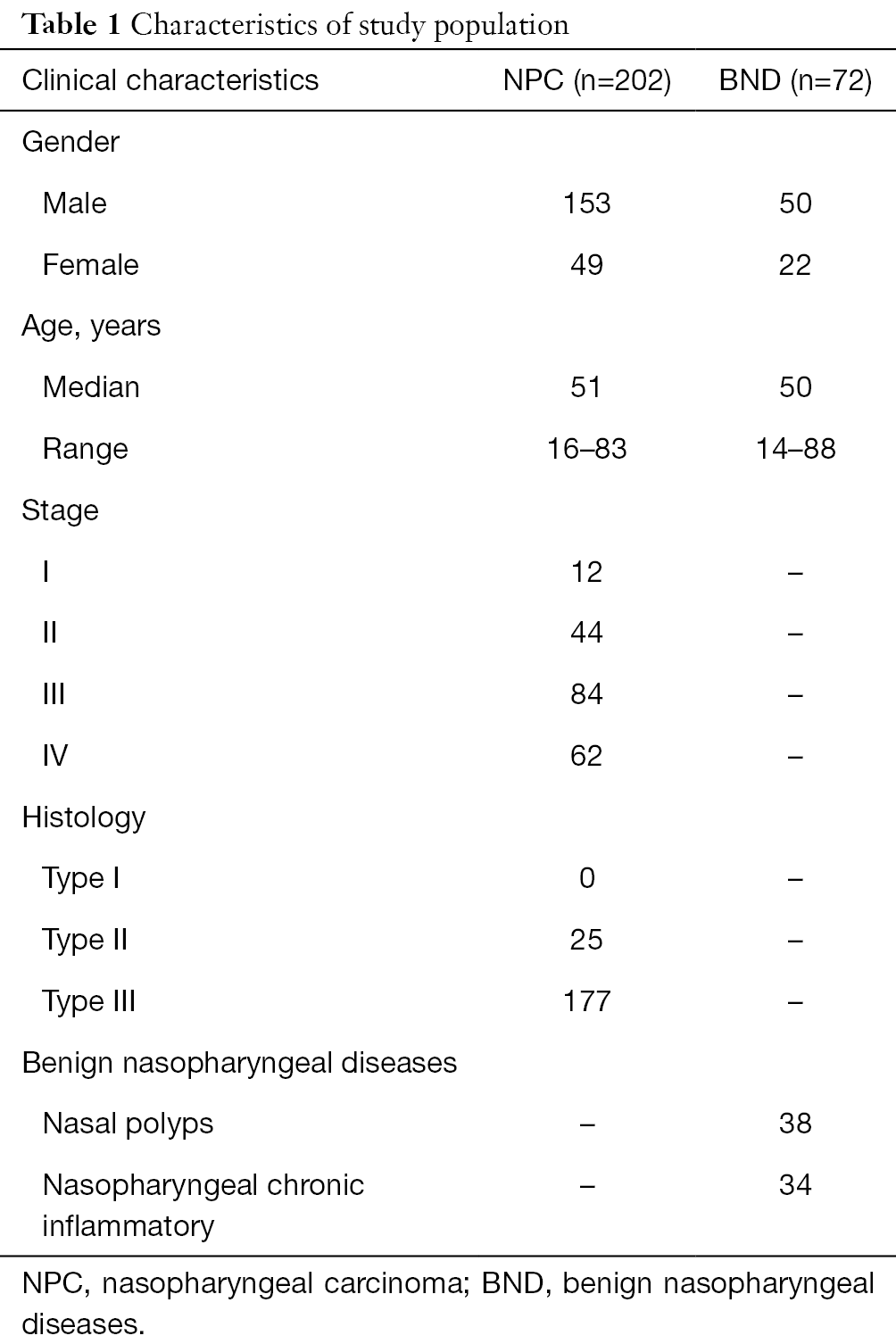 The levels of TMs in all patients

The levels of TMs in gender, histology and TNM stage are shown in Table 3. The levels of serum SCCAg, CYFRA21-1, CEA and FER in male were significantly higher than in female (P<0.05). No different TMs were observed between differentiated and undifferentiated nonkeratinizing carcinoma (P>0.05). Only CYFRA21-1 has the remarkable difference in early and middle-late stage (P<0.05).

The ROC of serum Y, CYFRA21-1, NSE and FER in NPC patients was shown in Figure 1. The area under curve (AUC), cutoff levels, sensitivities and specificities of serum TMs in patients with NPC were shown in Table 4. 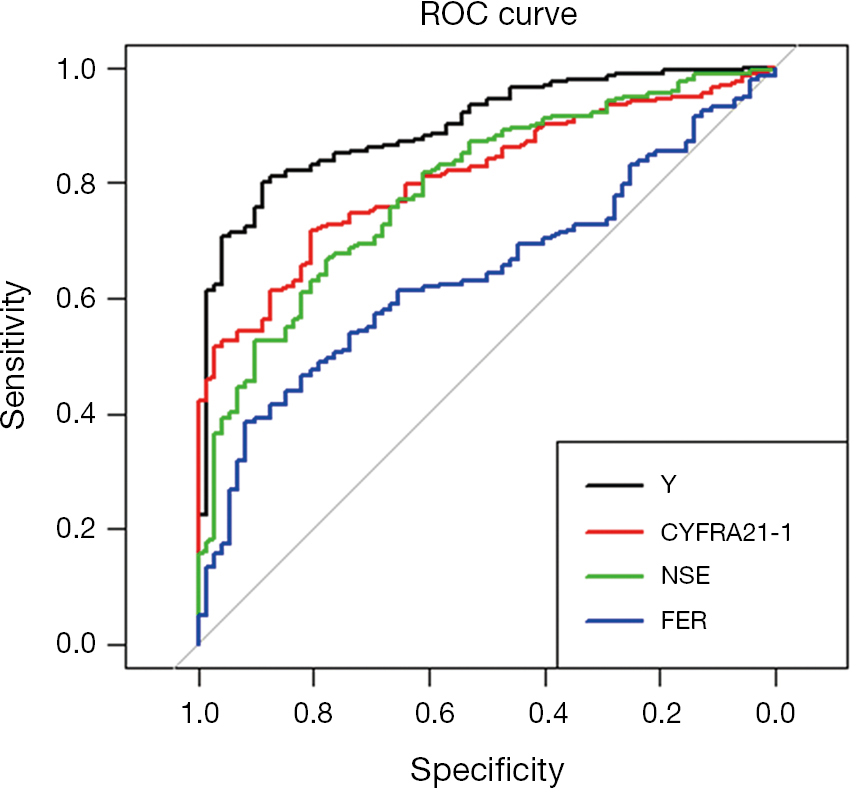 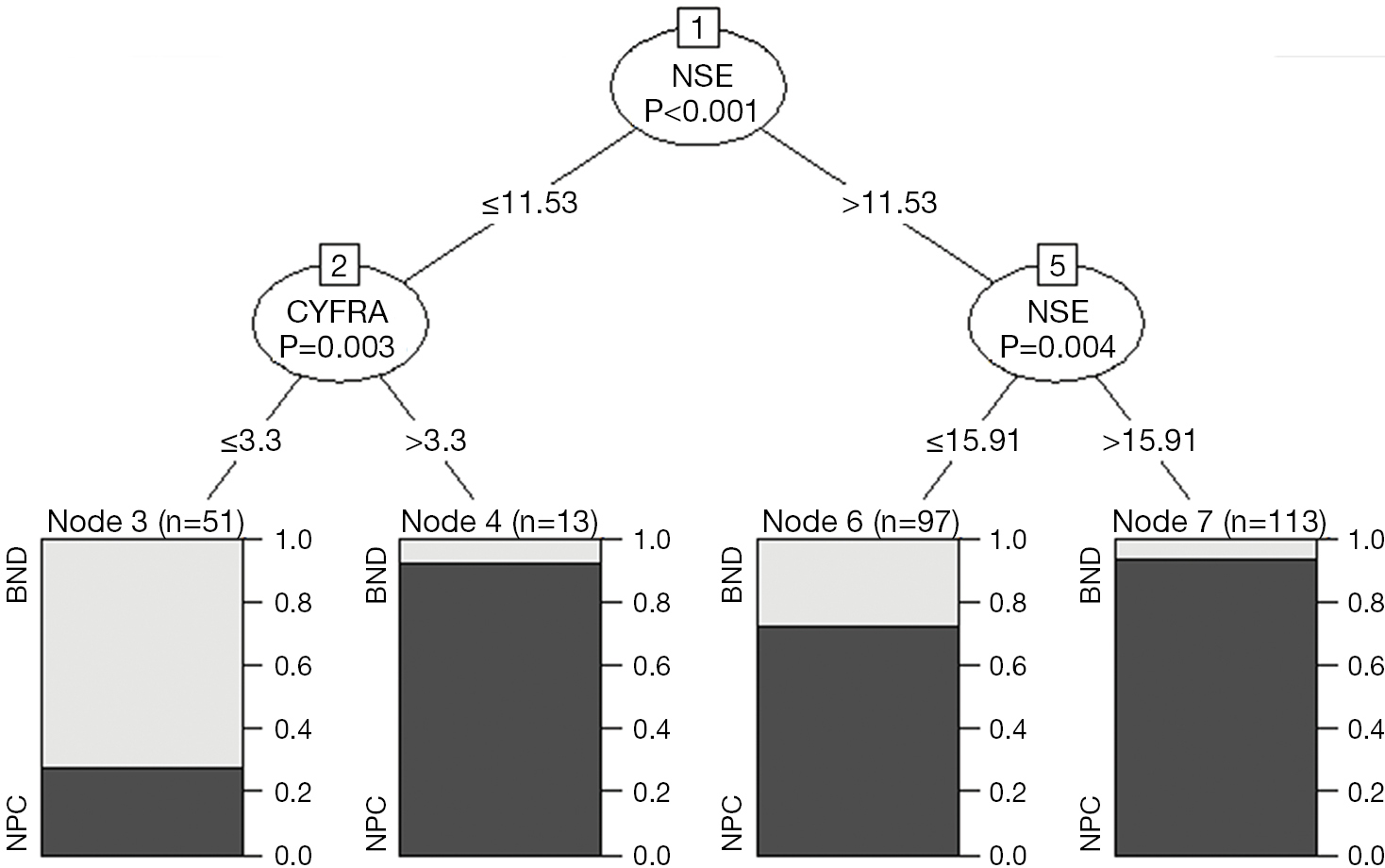 Logistic regression analysis and ROC curve was conducted to evaluate the value of serum TMs in the diagnosis of NPC. The study showed that CYFRA21-1, NSE, and FER were considered to be the predictors of NPC, of which CYFRA21-1 was the strongest predictor (OR =2.315). CA72-4 was not significantly associated with the risk of NPC events, therefore, it was not considered to be the predictor of nasopharyngeal carcinoma.

Serum CYFRA21-1 was 19 soluble fragments of keratin that was found in epithelial cells of a malignant tumor (12). The CYFRA21-1 was associated with the prognosis, metastasis and differentiation of nasopharyngeal carcinoma. Ma et al. demonstrated that serum CYFRA21-1 levels which taken before radiotherapy and chemotherapy predicted survival in patients with nonmetastatic (13). The serum level of CYFRA21-1 without radiation and chemotherapy would be a reliable biomarker to evaluate the long-term prognosis of patients with NPC (14). Song et al. indicated that the AUC, sensitivity and specificity of elevated serum CYFRA21-1 in patients with NPC were 0.91, 83% and 89%, respectively (4). In this study, CYFRA21-1 was not only the strongest predictor (OR =2.315), but also an important split node in the decision tree. At the same time, it increased along with the progress of the disease. The sensitivity and specificity of CYFRA21-1 were 71.8% and 80.6%, and it was slightly below compared with that reported in the literature. Different control group may be partly responsible for the difference in the study results.

NSE was known as a serum marker of small cell lung carcinoma (SCLC), retinoblastoma and neuroblastoma (15,16). In this article, the sensitivity and specificity of NSE were 66.8% and 77.8%. NSE was also an important predictor (OR =1.272), second only to CYFRA21-1. NSE was also a vital node that formed the decision tree with CYFRA21-1. However, the level of serum NSE showed no significant difference between patients with early and middle-late stage groups NPC. NSE was not a useful marker for NPC aggressiveness, but a predictive marker.

SCCAg was a subunit of squamous epithelial cell associated antigen TA-4 and one member of serine protease inhibition of glycoprotein family (17). No difference was observed for SCCAg not only in NPC and benign disease groups, but also in the early and middle-late stage NPC. Kimura and Barak have demonstrated that the level of serum SCCAg was increased in head and neck squamous cell carcinoma (13,18), which was inconsistent with our results. The reason we speculated here is that the research object of these documents are the head and neck cancer, of which only a small amount of NPC. Kearsley states that cellular SCCAg expression was related to the level of cellular differentiation in squamous epithelia. As the worse the differentiation, the weaker the expression. SCCAg expression was consistently absent in poorly differentiated (11). It suggested that the main reason for the low expression of SCCAg may be that the cases of NPC we have studied were undifferentiated squamous cell carcinoma, although there were differences in paraffin samples and serum samples.

Elevated FER levels have been detected in a variety of malignancies (19,20). Similarly, we found that FER was also higher in NPC, but did not increased along with the progress of the disease. FER had little effect on NPC prediction (OR =1.003), meanwhile, it was also eliminated by the decision tree. Serum FER levels were revealed to be not associated with age, survival and recurrence rates on multivariate analysis (12).

These nine TMs were analyzed to determine their significance for the diagnosis of NPC. Firstly, we used non-parametric Mann-Whitney U test to exclude SCCAg, AFU, CA125, CA19-9 and CEA that’s CA72-4, CYFRA21-1, NSE and FER left. And then we further ruled out CA72-4 by Logistic regression analysis, leaving CYFRA21-1, NSE and FER. And the corresponding the value of OR were obtained, we found that CYFRA21-1 was the strongest predictor, followed by NSE, and FER the weakest. Finally, the decision tree was used to exclude FER, and the remaining NSE and CYFRA21-1. NSE and CYFRA21-1 formed the tree structure of the two-layer branches, similar to the flow chart. CYFRA21-1 and NSE combination of serum TMs can improve diagnostic sensitivity and specificity, and facilitates the early diagnosis and differential diagnosis. Of course, this research had some limitations, which was a retrospective single center analysis.

In conclusion, the combination of CYFRA21-1 and NSE will be beneficial for distinguishing NPC from BND. Decision tree model may help clinicians to conveniently predict NPC, and provide guidance in choosing suitable detection and treatment. CA72-4, SCCAg, AFU, CA125, CA19-9, CEA and FER did not have diagnostic value of the NPC.

Funding: This work was supported by the Hubei Chenguang Talented Youth Development Foundation (No. 2015B29) and the Applied Basic Research Program of Wuhan Science and Technology Bureau (No. 2015060101010048).

Ethical Statement: The institutional research ethics committee approved the experimental protocols, the number of ethics approval was 20140036. Informed consent was obtained from all patients.