Long non-coding RNA, also known as lncRNA, is a group of non-coding RNA containing more than 200 nucleotides (5). Numerous studies have shown that lncRNAs play pivotal roles in nearly all aspects of normal biological processes in the human body (6). Besides that, many lncRNAs are also involved in pathogenesis of a variety of human diseases including heart diseases, liver diseases and different types of human cancers (7-9). As a lncRNA that can be induced by NF-ĸB pathway-related cytokines (10), NKILA plays a role as tumor suppressor gene in various types of human cancers including non-small cell lung cancer (11) and tongue squamous cell carcinoma (12). However, functionality of this lncRNA in colon cancer still hasn’t been reported.

In this study, expression of NKILA in tumor tissues of patients with different stages of colon cancer was detected. Effects of NKILA knockdown and overexpression on migration and invasion of cells of different colorectal adenocarcinoma cell lines were studied, and the interaction between NKILA and PI3K/Akt pathway was also explored. The report is as follow:

Colorectal adenocarcinoma cell lines HT-29, HCT-8 and C2BBe1, and normal cell line CCD-18 Co were purchased from ATCC. All cell lines were cultured according to the manufacture’s instructions. Cells were collected during logarithmic growth phase for all subsequent experiments. Transfection through lentivirus was performed according to the method described by Huang et al. (12).

Total RNA was extracted from tumor tissues and cells of different cell lines using Trizol reagent (Invitrogen, USA). NanoDrop™ 2000 Spectrophotometers (Thermo Fisher Scientific, USA) was used to check the quality of all RNA samples, and only the ones with a ratio of A260/A280 between 1.8 and 2.0 were used in reverse transcription. SYBR® Green Real-Time PCR Master Mixes (Thermo Fisher Scientific, USA) was used to prepare PCR reaction systems. Following primers were used in PCR reactions: 5'-TGGATTGTTGGGTATATTTTGGA-3' (forward) and 5'-TGTATGAAGAGGATGCTGAAGGC-3' (reverse) for NKILA; 5'-GACCTCTATGCCAACACAGT-3' (forward) and 5'-AGTACTTGCGCTCAGGAGGA-3' (reverse) for β-actin. PCR reaction conditions were: 95 °C for 1 min, followed by 40 cycles of 95 °C for 20 s and 60 °C for 50 s. Ct values were processed using 2−ΔΔCT method.

Transwell cell migration and invasion assay (BD Biosciences, USA) was performed to investigate the migration and invasion ability cells of each cell line. For migration assay, about 4×104 cells were inoculated into the upper chamber, the lower chamber was filled with RPMI-1640 medium (Thermo Fisher Scientific, USA) supplemented with 20% FCS (Sigma-Aldrich, USA). After incubation for 24 h, membranes were stained with 0.5% crystal violet for 20 minutes. Results were observed under a light microscope (Olympus, Japan). Upper chamber was pre-coated with Matrigel (356234, Millipore, USA) before invasion assay, and all other steps were essentially the same with migration assay.

A total of 30 BALB/c nude mice (20±2 g) were provided by Guangdong Medical Laboratory Animal Center (Guangdong, China). Mice were randomly divided into 3 groups with 10 mice in each group. Normal HT-29 cells, HT-29 cells with NKILA overexpression and HT-29 cells with NKILA siRNA interference were resuspended in 100 µL of matrigel/PBS mixture and were subcutaneously injected into mice in different groups. Mice were sacrificed 6 weeks later. Tumors were collected and photographed. Animal experiments were performed following Guide for the Care and Use of Laboratory Animals-Chinese Version [1996]. Animal ethics committee of First Affiliated Hospital of Kunming Medical University approved this study.

PSS19.0 statistical software (SPSS Inc., USA) was used. All experiments were performed in triplicate manner. Measurement data were recorded by (±s) and comparisons among multiple groups were analyzed by one-way analysis of variance, followed by Tukey test. Count data were compared by Chi square test. P<0.05 was considered to be statistically significant.

Effects of NKILA knockdown and overexpression on PI3K/Akt pathway 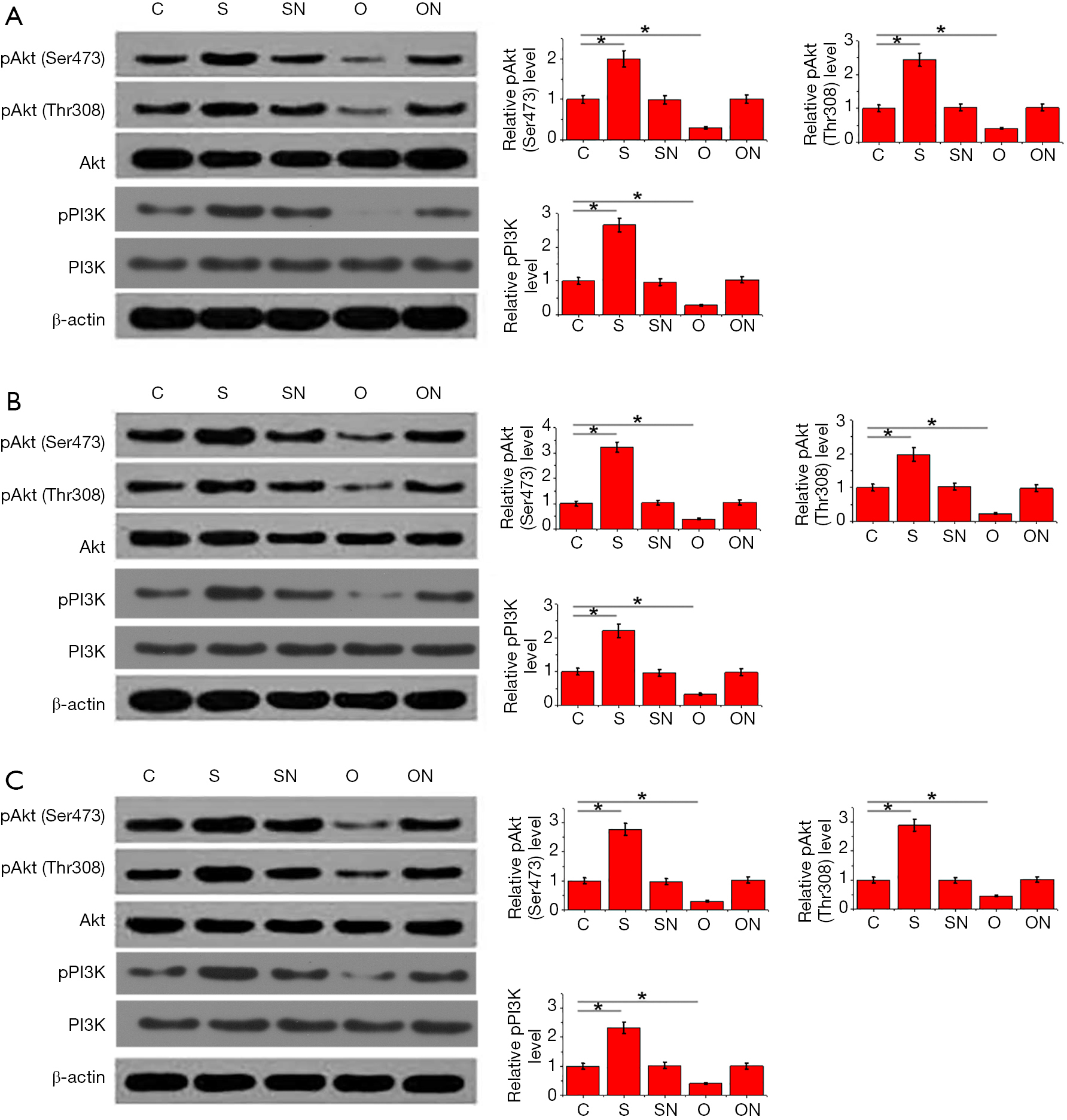 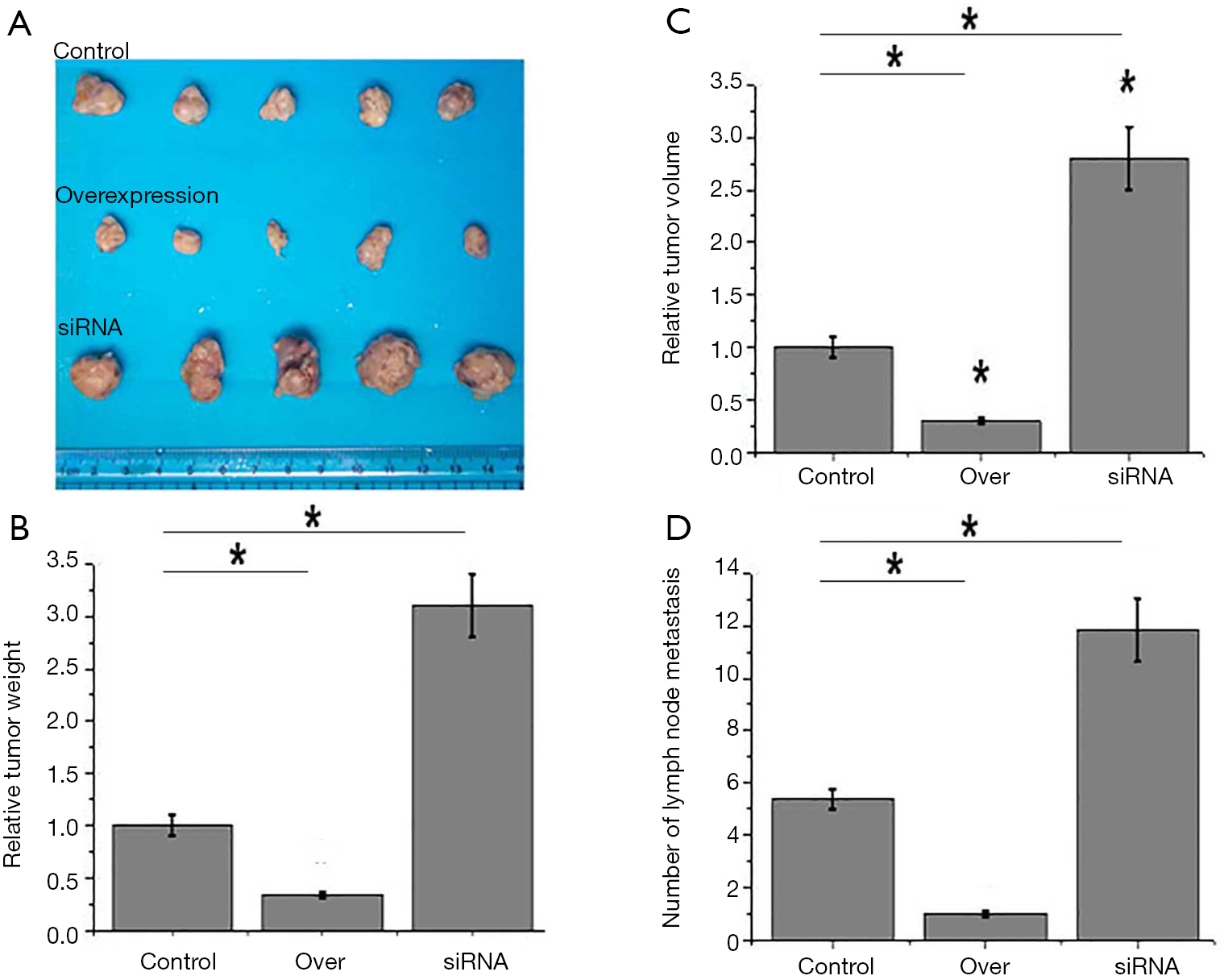 Colon cancer is usually considered as a group of heterogeneous diseases, and more than 30% cases of this disease are caused by genetic factors (13). Deletion or mutation of tumor suppressor genes and oncogenes in epithelial cells of gastrointestinal tract are major causes of colorectal adenocarcinoma, which is the dominant type of colon cancer (14). Recent advances in the pathogenesis of colon cancer also revealed the involvement of different lncRNAs. Liang et al. have shown that lncRNA H19 plays a role as oncogene to promote the epithelial to mesenchymal transition during the development of colon cancer by sequestering miRNAs (15). In another study, lncRNA HOTAIR was found to be upregulated during the progression of colorectal cancer, and the increased expression level of this lncRNA was found to be closely correlated with the poor prognosis (16). As a tumor suppressor gene, lncRNA NKILA was usually downregulated during the progression of different human malignant tumors such as breast cancer (17). Based on our knowledge, no studies on the expression pattern of NKILA in the development of colon cancer have been reported. In this study, expression level of NKILA was found to be significantly reduced with the progression of colon cancer, indicating that NKILA may also play a role as tumor suppressor gene in colon cancer.

Functionality of NKILA has been well studied in several human cancers. In the study of non-small cell lung cancer, NKILA was proved to inhibit the invasion and migration of tumor cells through interactions with NF-κB/Snail pathway (11). In another study, NKILA was reported to play as role as tumor suppressor in the development of tongue squamous cell carcinoma by inhibiting epithelial-mesenchymal transition (12). In the study of malignant melanoma, Bian et al. reported that NKILA could inhibit the development of tumor by regulating NF-ĸB signaling transduction pathway, indicating that NKILA may serve as a potential therapeutic target for the treatment of melanoma (18). In our study, increased invasion and migration abilities of different colorectal adenocarcinoma cell lines, including HT-29, HCT-8 and C2BBe1, were observed after NKILA knockdown. In addition, NKILA knockdown was also promoted the growth of tumor in mice derived from HT-29 cells. But NKILA overexpression played an opposite role. Those data suggest that NKILA can inhibit the growth of colon cancer by inhibiting the migration and invasion of tumor cells.

PI3K/Akt pathway was found to play pivotal roles in oncogenic transformation of various human cancers (19,20). Besides that, the activation of PI3K/Akt pathway was also found to be responsible for failures in treatment of cancers (21). Activation of PI3K/Akt was also observed in colon cancer (22). LncRNA NKILA may interact with NF-ĸB pathway to perform its functions (23). However, the interaction between NKILA and PI3K/AKT pathway still hasn’t been reported. In this study, increased levels of both pAkt (Thr308), pAkt (Ser473) and pPI3K in all three colorectal adenocarcinoma cell lines were observed after NKILA knockdown, while levels of both pAkt (Thr308), pAkt (Ser473) and Ppi3k decreased significantly after NKILA overexpression. Those data suggest that NKILA expression can inhibit the activation of PI3K/Akt pathway, which in turn inhibits the progression of tumor.

In conclusion, expression level of NKILA in patients was reduced with the development of colon cancer. NKILA can inhibit the migration and invasion of different colorectal adenocarcinoma cells by inhibiting the activation of PI3K/Akt pathway.

Funding: This work was supported by the Basic Application Fund of Yunnan Province [grant number 2015FB039].

Ethical Statement: The study was approved by the Ethics Committee of The First Affiliated Hospital of Kunming Medical University. Signed written informed consents were obtained from the participants and/or guardians.