Worldwide, pancreatic cancer (PC) is the eighth highest cause of cancer mortality (1). Although great progress in surgical operation has been made, such as the development of novel perioperative administration, perioperative chemotherapy and radiotherapy techniques, the prognosis of PC patients is still very poor. On account of PC developing no symptoms, local invasiveness, and metastases to distant organs in the early stage of clinical process (2), the median survival time of PC patients is 5–8 months and their 5-year-survival rate is less than 10% (3). PC carcinogenesis is a multistep course, involving dysfunction of oncogenes and suppressor genes (4). Therefore, there is a pressing need to understand what potential molecular mechanisms take place for the progression of PC, and to detect suitable strategies for a targeted therapy.

MicroRNAs (miRNAs) play roles in the malignant progression of different types of tumors, belonging to endogenous single-stranded non-coding RNA (5). It could function as either oncogenes or tumor suppressors (6). Via these mechanisms, miRNAs accommodate as much as 30% of human genes, and play an important role in many kinds of biological processes, including cell metastasis, apoptosis, differentiation, proliferation, and others (7). MiRNAs have been proven to exert a significant amount of influence on the etiology and pathogenesis of cancer (8). Many reports have shown that a lot of cancers are regulated by these miRNAs like prostatic cancer, breast cancer, and hepatocellular cancer (9-11). Recent reports have shown that miRNAs are also associated with PC, providing new methods for PC treatment (12). Fawzy et al. have reported that miR-1275 repressed the growth of hepatocellular carcinoma cells, through targeting the three IGF2-mRNA-binding proteins (5). However, the function of miR-1275 in PC remains unknown. In this paper, we show that up-regulated miR-1275 expression can depress growth and invasion of pancreatic cancer cells. Our results also demonstrate that miR-1275 restrained growth and invasion of PC cells, through directly targeting PKCα.

The informed consent was signed by every patient. Our research was approved by the Renmin Hospital of Wuhan University ethical organization and abided by the rules set by the Declaration of Helsinki.

We purchased the miR-1275 mimic (HMI0136) and its inhibitor (HLTUD0136) from Sigma (San Francisco, CA, USA), controls from Ribo (Guangzhou, China). PANC-1 cell lines were grown in 6-well plates. The confluence condition of cells was transfected at 30% for 24 hours. According to the instructions of manufacturer, cells were either transfected with a miR-1275 mimic/inhibitor or the controls were transfected by Lipofectamine 2000 reagent (Invitrogen Carlsbad, CA, USA). 10 nmol/L was the optimal concentration of miR-1275.

Cell growth was tested using the Cell Counting Kit-8 (CCK-8) (Dojindo, Shanghai, China). Cells were grown in the medium with a 10% diluted concentration of CCK-8 at 37 °C. After staining, 0, 24, 48, and 72 h were selected as determining times for transfected cell growth rates. A 450 nm wavelength was used to analyze values of optical density (OD).

Assay of cell migration and invasion

Invasion assay was done using the Transwell insert (Corning, NY, USA). Cells (1×105) were resuspended into the membrane of the upper chamber with Matrigel (BD Bioscience, San Jose, CA) on the 24-well plate. In the assays of cell migration, each group of cells (5×104) was resuspended in the upper chamber of the insert with 8-well plate of BD Bioscience. In both detections, PC cells were grown in medium without serum, and medium of the lower chamber contained 10% FBS. After several hours of incubation, a cotton swab was used to clean the cells without migration or invasion in every well. Then, the inserted cells were retained in methyl alcohol and colored with hematoxylin stained. The stained cells were counted with the microscope (Olympus).

HEK293T cells (8×103/per well) were added into 96-well plates for transfection. Each well of HEK293T cells was transfected with a compound of 100 ng of PKC-3'UTR, 200 ng of PKC or PKC-miR-1275, and 20 ng of Renilla plasmid (without 3'UTR) using Lipofectamine 2000. After 48 hours, a dual-luciferase reporter gene system was implemented to monitor the activities of firefly and Renilla luciferase. Transfection efficiency was evaluated by the activities of Renilla luciferase, that also acted as a control.

We amplified the integrate PKCα cDNA (consisting of the ORF and 3'-UTR) by PCR and inserted it into the pcDNA3.1 vector. Then, the (Object) it produced the pcDNA-PKC constructs. Cells were seeded in 6-well plates. Then, the cells were transfected by 20 nM miR-1275 or a 20 nM scrambled dsRNA. After 24 hours, we used pcDNA-PKCα plasmid DNA or the pcDNA plasmid (2 µg) to co-transfect the treated cells. Finally, the cells were detected.

Protein of the cell and tissue specimens were collected as previously described (10). The concentration of protein was determined by BCA assay (Thermo Fisher, Rockford, IL, USA). The same quantities of cells lysate were resolved by SDS–PAGE. Then, the protein was shifted to the PVDF membranes (Takara, Da-lian, China). Membranes were blocked with the following antibodies: the primary antibody was rabbit anti-PKCα (1:1,000; Abcam, Cambridge, USA), and the secondary was rabbit anti-GAPDH (1:5,000, Abcam, Cambridge, USA). Secondary HRP-conjugated antibodies (Santa Cruz) were used to detect the bound antibodies while the proteins were imaged by Pierce enhanced chemiluminescent substrate (Thermo Fisher). 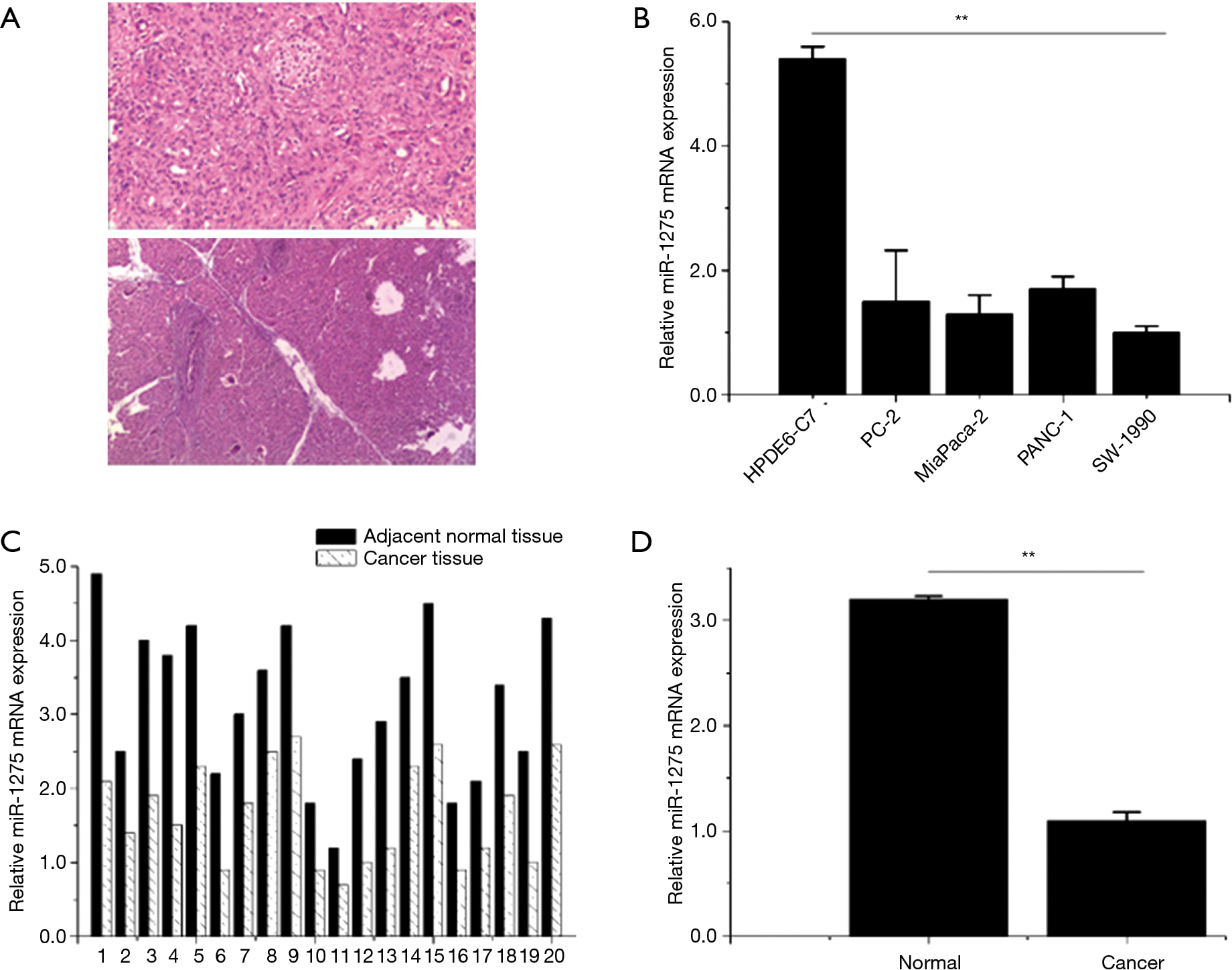 To research the goal of miR-1275 in PC cells, we used a target-scan soft website to forecast the latent goals of miR-1275. Figure 3A indicated there was complementarity relationship between has-miR-1275 and the PKCα 3' UTR. Using luciferase reporter assay, we verified the effect between PKCα and miR-1275 in the PC cell lines. Up-regulated miR-1275 expression in PANC-1 cells led to a reduced luciferase expression (Figure 3B). Furthermore, miR-1275 mimics reduced PKCα expression, and miR-1275 inhibitor played an opposite role in PC cell lines (Figure 3C and Figure3D). These data sets have revealed that PKCα expression was negatively regulated by miR-1275 through reducing miR-1275 mRNA in PC cells. 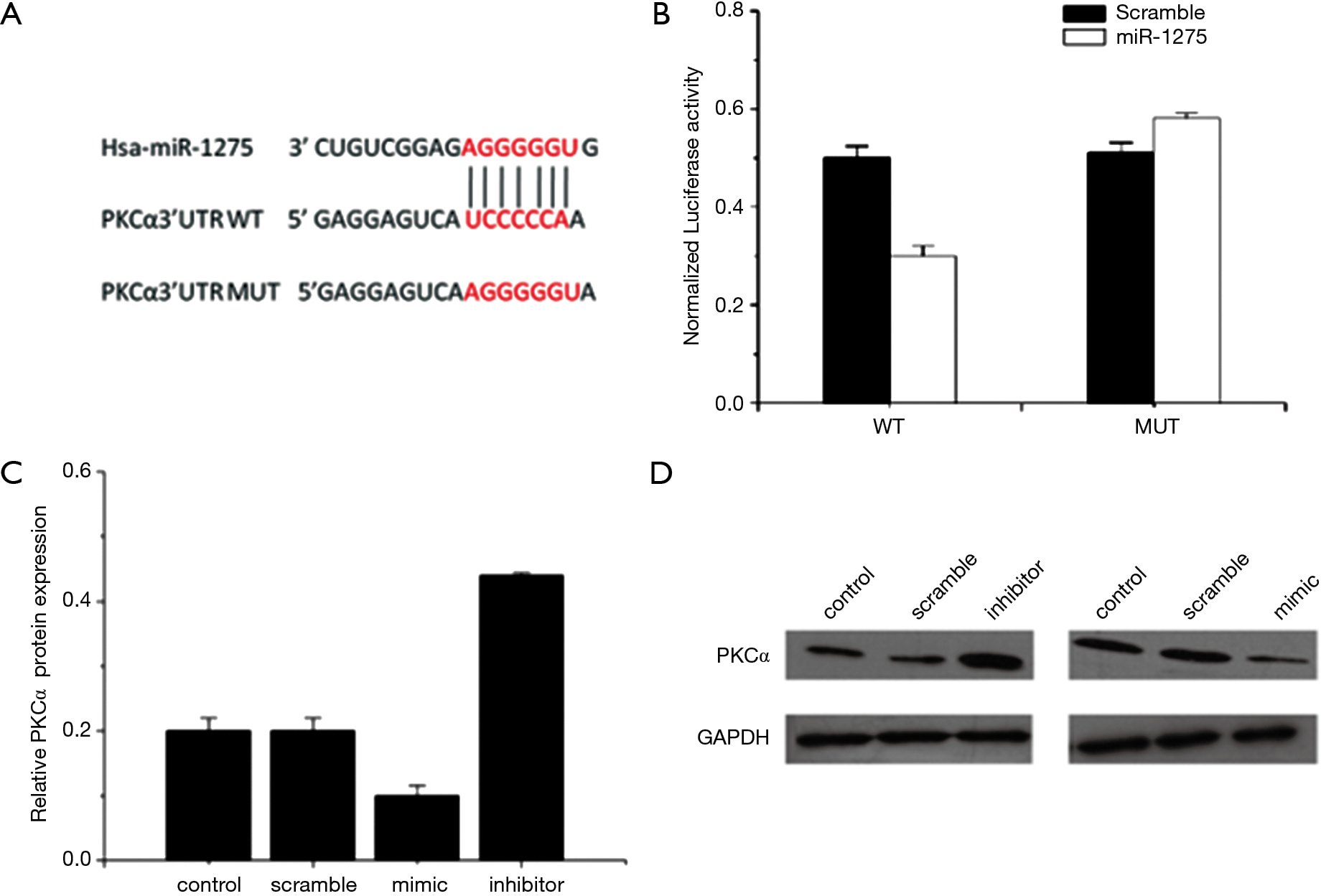 Figure 4 Up-regulated PKCα expression destroyed the miR-1275 induced repression of growth and invasion in PC cells. (A) Western blot was done to analyze PKCα expression in PANC-1 cells co-transfected with either miR-1275 mimics or scramble and pCDNA-PKCα or pCDNA empty vector; GAPDH was selected as a control; (B) the CCK8 experiment was used to detect the proliferation of PANC-1 cells transfected at 0, 24, 48, and 72 h; (C) transwell analysis of PANC-1 cells transfected with different combinations (original magnification, ×200); (D) invasion analysis of PANC-1 cells treated with different combinations. *, P<0.01; **, P<0.05 vs. the corresponding control group.

In comparison to the immortalized human pancreatic ductal epithelial cells line HPDE6-C7 (Figure 5A), PKCα mRNA was significantly increased in the PC cell lines (PANC-1, PANC-1, MIA PaCa-2, SW1990, PC-2). The level of PKCα mRNA was higher in tumor tissues than that in non-cancerous tissues (Figure 5B). Furthermore, the level of PKCα protein in PC was also higher than that in matched non-cancerous tissues (Figure 5C). Figure 5D illustrates that there is frequent inverse correlation, when the level of PKCα mRNA is plotted against miR-1275 expression (r = −0.79; P<0.01).

Recently, numerous studies have shown that many gene expressions are regulated by miRNAs in various cancers, including pancreatic cancer (8,13). Through this regulation, miRNAs may make a great impact on cellular stress, cell differentiation, proliferation, invasion etc. (14,15). Due to the low survival rate in pancreatic cancer patients, there are numerous attempts being made to target the different molecular pathways in pancreatic cancer. Our data revealed that miR-1275 expression was higher in normal pancreatic tissues compared with PC tissues. Furthermore, an up-regulated miR-1275 expression depressed cell proliferation, migration and invasion in PC cells. Furthermore, we also revealed miR-1275 to be a suppressor by directly interacting with PKCα.

Therefore, our data discovered that miR-1275 could be acting as a suppressor gene via depressing cell proliferation and invasion in PC carcinogenesis. Fawzy et al. reported that miR-1275 was correlated with hepatocellular carcinoma targeting with the three IGF2-mRNA-binding compounds to prevent carcinoma proliferation (5). However, some reports have shown that miR-1275 could promote cell migration, invasion and proliferation through IGF-1R and CCR7in the head and neck squamous cells for carcinoma patients (5,16). The function of miR-1275 in PC remains to be determined. As per our results, miR-1275 expression was lower in PC when it was compared with the matching normal pancreatic tissues. To determine the functions of miR-1275 in PC carcinogenesis, the effects of miR-1275 were observed on a PC malignant specimen, which included testing for cell growth, migration and invasion. Up-regulated miR-1275 expression decreased PC cell growth, migration and invasion.

Our study found the potential target of miR-1275 through four miRNAs target prediction algorithms. The 3'-UTR of PKCα mRNA was confirmed for complementary sequences of miR-1275. The results of the luciferase assays displayed an active decline in 3'-UTR of PKCα luciferase activity when con-transfected with miR-1275. Compared with the control and the scrambled group, the effects of up-regulated miR-1275 expression decreased the expression of PKCα protein and mRNA. The data strongly support the hypothesis that PKCα can be directly targeted to miR-1275 in PC. Protein kinase C (PKC), which belongs to the serine-threonine kinases family, has been observed regulating cell adhesion, secretion, proliferation, differentiation and apoptosis (17-19). Furthermore, many studies have shown that PKCα can play a role in diagnosing cancers (20). In pancreatic cancer, PKCα expression was thought to be directly correlated with tumorigenicity and survival rate (21). PKCα was also observed advancing PC cell growth and invasion (22). Taken together, this evidence strongly indicates that decreasing PKCα expression can also be a significant method for regulating and treating PC. For PC, our data was first to reveal that miR-1275 could be a new suppressor and a negative regulator of PKCα expression, furnishing a possible new method for PC therapeutics.

Ethics Statement: The study was approved by the Renmin Hospital of Wuhan University ethical organization (No. 2018CFB136).