Breast cancer is the most common cancer and the leading cause of cancer death in females. It is reported that more than one million individuals are diagnosed with breast cancer and over 400,000 females die from this disease every year all around the world (1-3). Despite that the incidence rate of breast cancer in China is relatively low, the increment speed of its incidence in China is much higher than that in western countries (4,5). Recently, great progress on the prognosis has been achieved owning to the improved screening strategies and novel therapeutic approaches for breast cancer, whereas the survival of breast cancer patients remains unfavorable due to the high rate of recurrence and metastasis, especially for triple-negative breast cancer patients (6,7). Therefore, exploring novel biomarkers that are associated with the prognosis of breast cancer patients, and finding novel therapeutic targets are of great value to the management of this disease.

Long non-coding RNAs (lncRNAs) are a class of non-coding RNAs with more than 200 nucleotides, which participate in a variety of activities and are observed to be dysregulated in diverse cancers (8-13). As one of the members of lncRNA family, the small nucleolar RNA host gene 1 (SNHG1) that locates at 11q12.3 locus is up-regulated in a number of cancers such as cervical cancer, colon cancer and glioma, and it correlates with worse prognosis in cancer patients. Besides, studies find that increased lncRNA SNHG1 expression in these cancer cells enhances cancer cell proliferation, migration and invasion but inhibits cell apoptosis (14-16). We therefore hypothesized that lncRNA SNHG1 is also involved in the development and prognosis of breast cancer. However, no related study has been conducted so far. Hence the aim of this study was to investigate the correlation of lncRNA SNHG1 with prognosis in breast cancer patients, and its effect on breast cancer cell proliferation and apoptosis.

A total of 178 breast cancer patients underwent resection at Department of Thyroid and Breast Surgery in The Central Hospital of Wuhan were consecutively enrolled in this study from Jan 2012 to Dec 2013. The inclusion criteria were as follows: (I) patients were diagnosed as primary breast cancer according to clinical, imaging and pathological findings; (II) age above 18 years; (III) about to undergo resection; (IV) able to be followed up regularly. This study was approved by the Ethics Review Board of The Central Hospital of Wuhan (No. 2011-12), all the patients provided signed informed consents.

Tumor tissue and paired adjacent tissue were obtained from breast cancer patients during the operation and immediately stored in the liquid nitrogen for further detection.

LncRNA SNHG1 level in tumor tissue and adjacent tissue was determined by quantitative polymerase chain reaction (qPCR) assay. Tumor features including molecular subtype, pathological grade, TNM stage, human epidermal growth factor receptor 2 (HER-2), estrogen receptor (ER) and progesterone receptor (PR) status were documented, and their correlation with lncRNA SNHG1 level was further analyzed. In addition, patients were followed up every 1 month in the first half year, and every 3–6 months in the following duration until 48 months (the last follow-up date was 2017/12/31, and a total of 21 patients lost follow up during follow-up period). Finally, all 178 patients were included in the analysis. Overall survival (OS) was calculated, and the comparison of OS between patients with lncRNA SNHG1 high expression and low expression was conducted. As for patients who lost follow up, they were considered as censored data in the analysis of OS.

Detection of cell proliferation and apoptosis after transfections

After transfection of MDA-MB-453 cells and MCF7 cells, Cell Counting Kit-8 (CCK8) assay was performed at 0, 24, 48 and 72 h to measure cell proliferation using CCK8 commercial kit (R&D, USA), and Annexin V-fluorescein isothiocyanate/propidium iodide staining (AV/PI) assay was performed at 72 h to measure cell apoptosis rate using AV/PI commercial kit (Thermo, USA). In addition, apoptotic and anti-apoptotic markers C-Caspase 3 and p-P38 expressions were also measured at 72 h by Western blot. All the experiments were carried out according to the manufactures’ instructions.

LncRNA level was determined by qPCR. Total RNA was extracted by TRIzol Reagent (Invitrogen, USA) according to the manufacturer’s instructions. Then RNA was quantified by OD 260, and 1 µg of total RNA from each sample was used for cDNA synthesis with QuantiNova Reverse Transcription Kit (Qiagen, German). The cDNA product was subsequently subjected to qPCR with SYBR Green kit (TaKaRa, Japan). PCR amplification was performed as follows: 95 °C for 5 min, followed by 40 cycles of 95 °C for 5 s, 61 °C for 30 s. Subsequently, the expressions of candidate lncRNAs were calculated using the 2−ΔΔCt methods with phosphoglyceraldehyde dehydrogenase (GAPDH) as internal reference. The primer of lncRNA SNHG1 was: forward 5'-AGGCTGAAGTTACAGGTC-3', reverse 5'-TTGGCTCCCAGTGTCTTA-3'; the primer of GAPDH was: forward 5'-GAGTCCACTGGCGTCTTCAC-3', reverse 5'-ATCTTGAGGCTGTTGTCATACTTCT-3'. 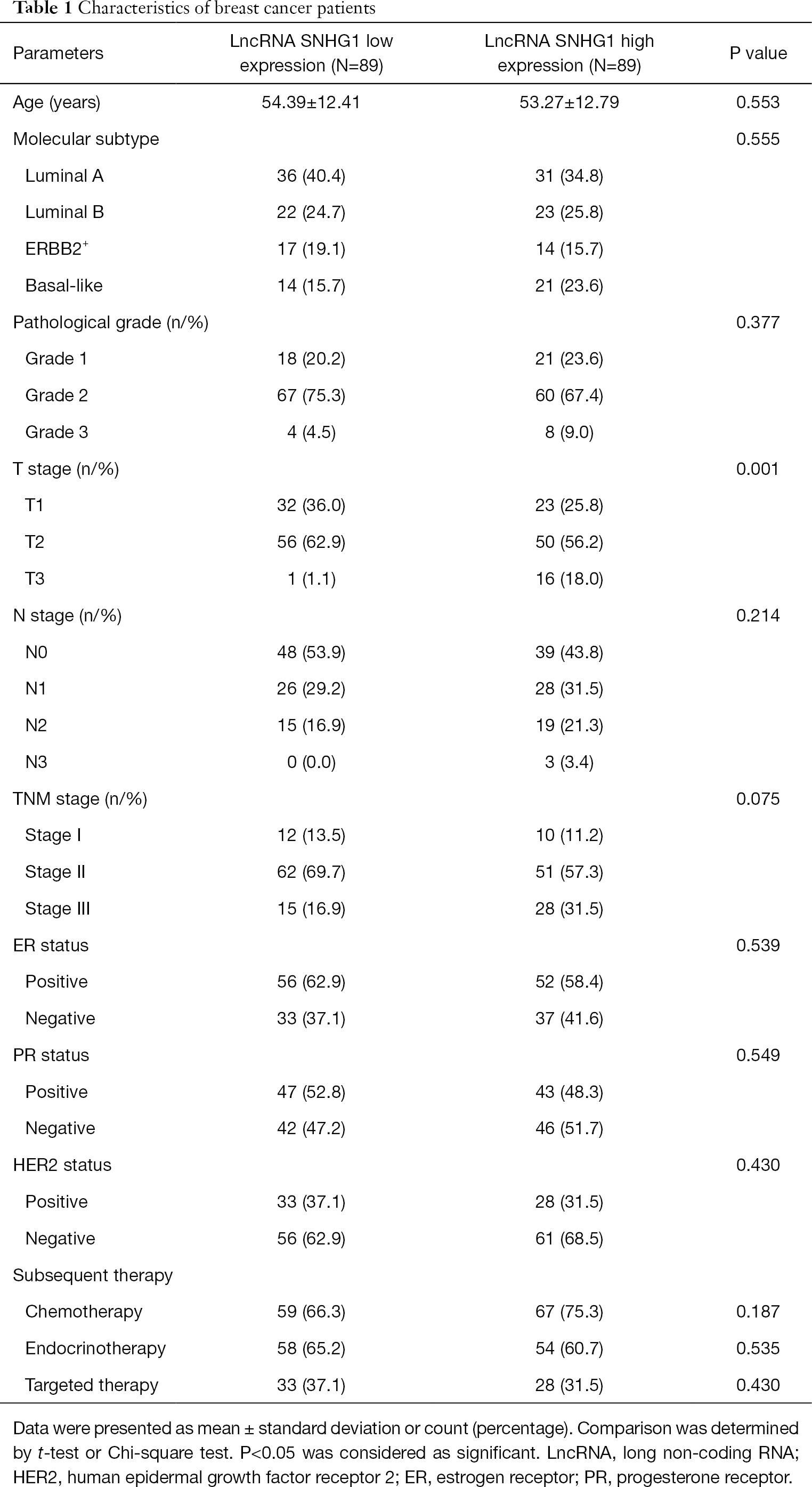 LncRNA SNHG1 expression in tumor tissue and its correlation with OS 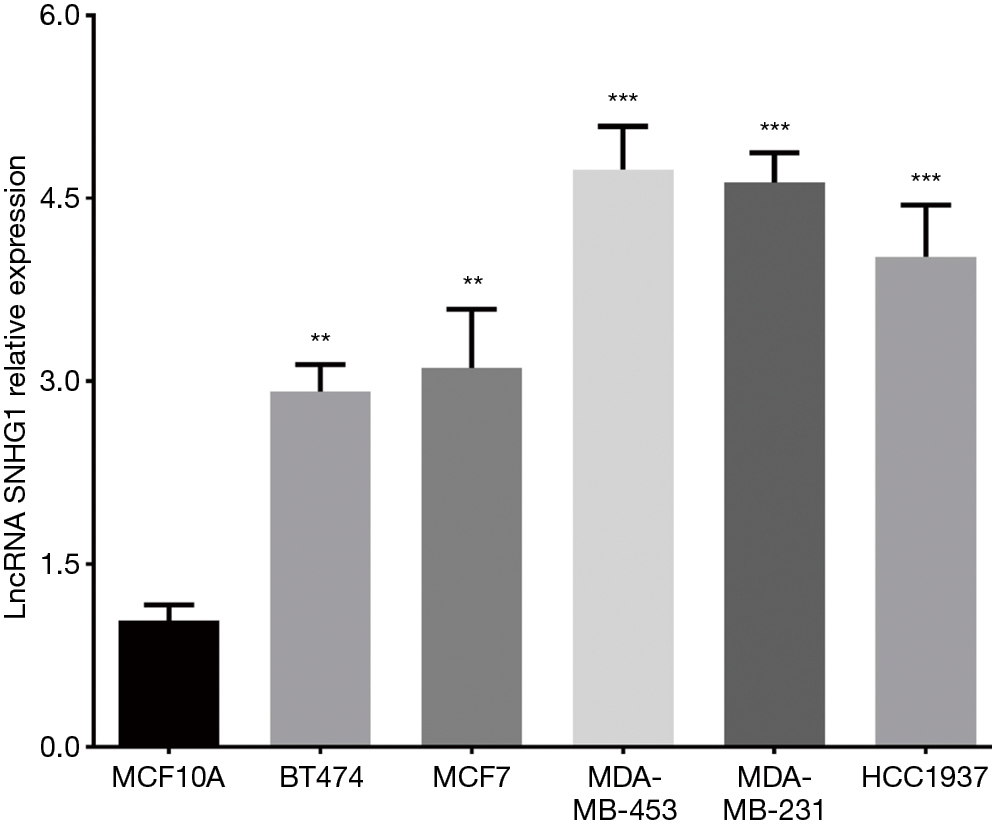 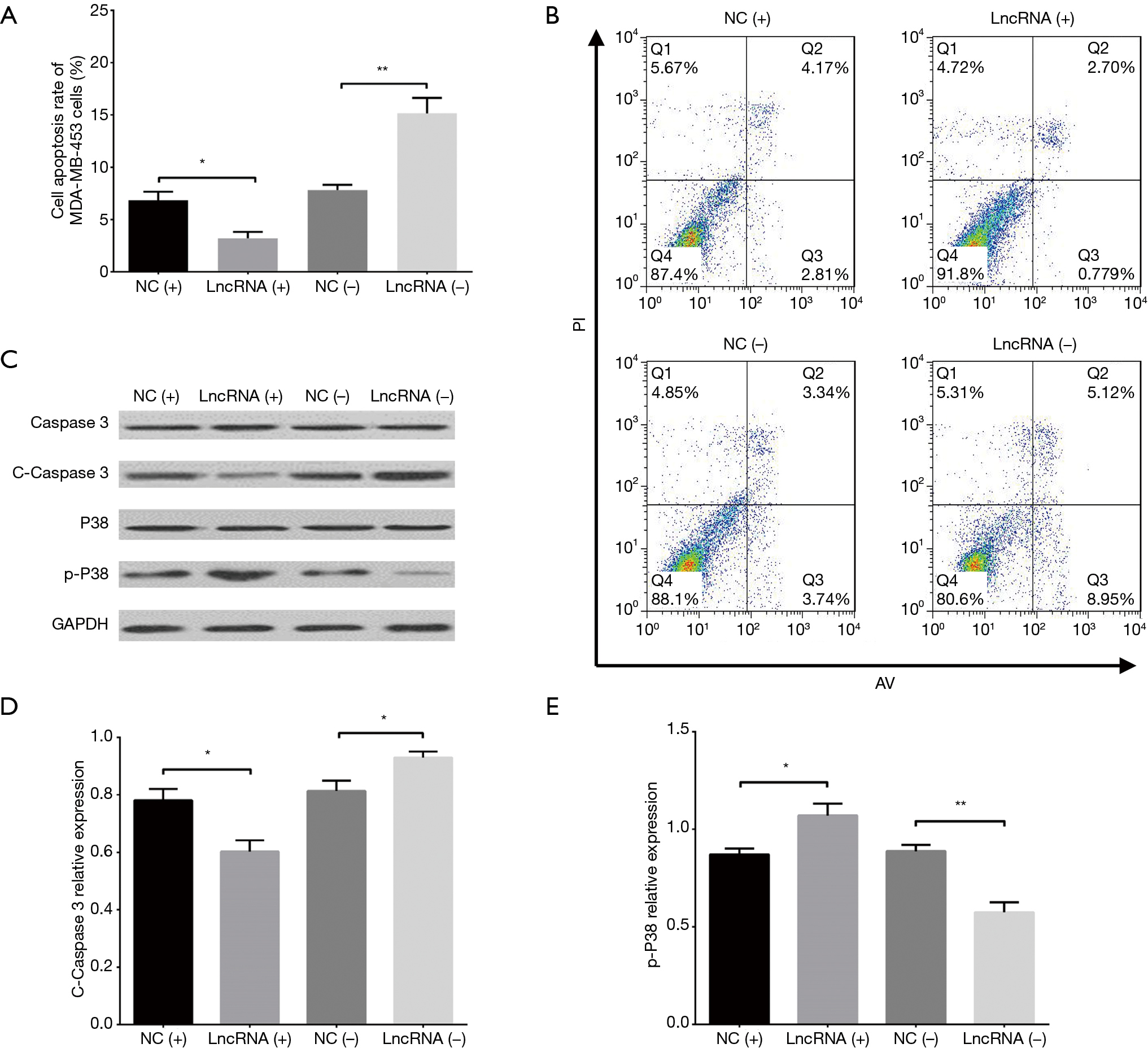 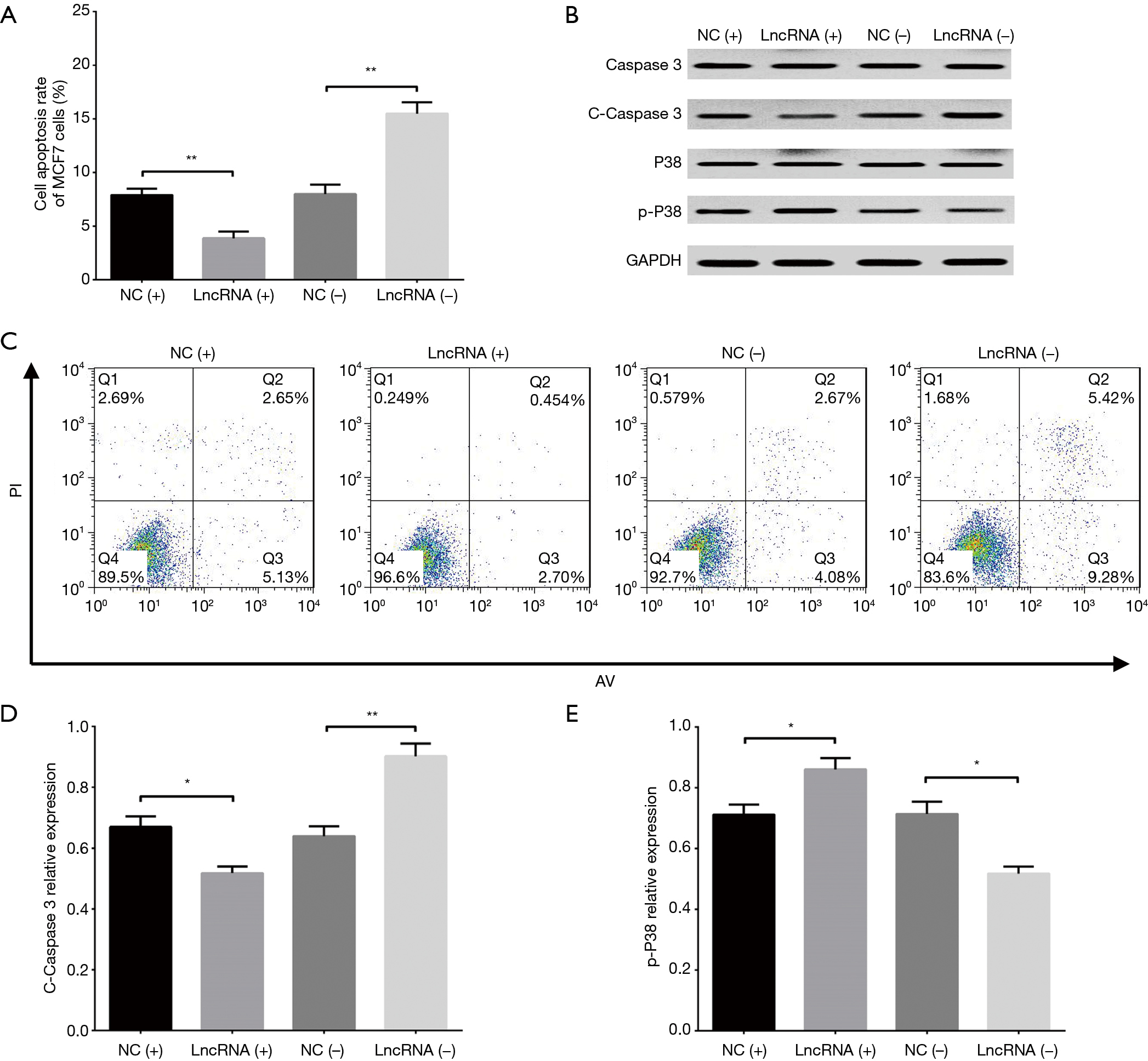 In the current study we found that: (I) lncRNA SNHG1 expression in tumor tissue was up-regulated compared to adjacent non-tumor tissue, and it was positively correlated with T stage but negatively associated with OS in breast cancer patients. (II) LncRNA SNHG1 promoted breast cancer cell proliferation but suppressed cell apoptosis.

In conclusion, lncRNA SNHG1 is upregulated in tumor tissue and correlates with higher T stage and worse OS, and it promotes cell proliferation but inhibits cell apoptosis in breast cancer.

Ethical Statement: The study was approved by the Ethics Review Board of The Central Hospital of Wuhan (No. 2011-12), all the patients provided signed informed consents.