The main pathological type of primary liver cancer is hepatocellular carcinoma (HCC) (1). As one of the most common malignancies in the world, liver cancer has become the fourth leading cause of cancer death in the world, and it is the second leading cause of male cancer death in the world (2). In China, liver cancer has become the third most common tumour and the fourth leading cause of cancer death in men and women (3). In recent years, the incidence and mortality of liver cancer in China have been rising, seriously threatening the health and lives of our people (3). Although in recent years, surgical resection, ablation treatment, liver transplantation and other methods have made some progress in the treatment of HCC, the prognosis of HCC patients is still poor due to its high recurrence rate and mortality. Therefore, studying factors that influence survival and recurrence in patients with HCC is important to improve patient survival.

In recent years, an increasing number of studies have shown that inflammatory factors in the HCC microenvironment play an important role in the development of HCC. Many inflammatory factors are present in the microenvironment of HCC, such as tumor necrosis factor-alpha (TNF-α), IL-1, and IL-6. The interaction between hepatocytes and inflammatory factors leads to changes in the microenvironment, which are crucial in the early and late stages of HCC. Among these factors, TNF-α is mainly produced by activated monocyte-macrophages, endothelial cells, and lymphocytes, and it exhibits biological activity by binding to soluble TNF-binding receptors (TNFR1 and TNFR2) (4). TNF-α binds to its cell membrane receptor and activates intracellular downstream signalling pathways, including proapoptotic pathways induced by caspase-8 interaction with Fas-associated death domain (FADD) and the cIAP-1 and TRAF2 interaction-induced resistance apoptotic pathway (5-8).

However, many controversies remain in the research reports on TNF-α. TNF-α often exhibits opposite biological functions during tumorigenesis and development (9,10). TNF-α was initially discovered to be the most effective anticancer cytokine. Local, high-dose TNF-α treatment of tumours can selectively destroy tumour tissue blood vessels, thereby exerting anti-tumour effects (11). In the process of tumour treatment, serum TNF-α was found to be negatively correlated with tumour area and tumour number (12). In addition, other studies have shown that diclofenac can cause mild apoptosis in HepG2 cells, but this effect can be greatly enhanced by TNF-α (13). Interestingly, however, studies have shown that in the early stages of HCC, loss of TNFR1 signalling in mice reduces the development of liver cancer (14). In the late stage of HCC development, anti-TNF-α treatment can inhibit the progression of HCC (15). These studies indicate that TNF-α is involved in the development of HCC. Overall, the mechanism of action of TNF-α in the progression of HCC is unclear but appears to be very important. These previous studies also suggest that it is necessary to further examine the effects of TNF-α on the survival and prognosis of patients with HCC. Nuclear factor-kappa B (NF-κB) dissociates from IKB after receiving the appropriate stimuli (such as TNF-α) and enters the nucleus to affect the expression of apoptosis-related genes (8,16), thus mediating the invasion and spread of tumour cells. To further investigate the relationship between TNF-α and NF-κB levels in the HCC microenvironment and postoperative recurrence and survival in patients with HCC, we used immunohistochemical methods to identify HCC tissues from 81 patients with HCC who met the inclusion criteria. The levels of TNF-α and NF-κB were detected, and the intrinsic relationship between these factors and clinicopathological features was analysed. The risk factors for recurrence and survival after HCC operation were explored, and the results may provide a basis for estimation of postoperative recurrence in patients with HCC.

A total of 81 paraffin-embedded specimens from Barcelona Clinic Liver Cancer-0-B (BCLC-0-B) HCC patients who underwent surgical resection in our hospital from January 2000 to December 2012 were collected. There were 65 males and 16 females, with an age range of 31–83 years and a median age of 56 years. The detailed inclusion criteria are as follows: (I) patients diagnosed with BCLC-0-B HCC for the first time; (II) no anticancer treatment and radical hepatectomy before surgery; (III) follow-up information available; (IV) no autoimmune diseases, other malignant tumours or severe heart, lung, kidney or blood diseases; (V) clinical, pathological, surgical and other related data intact. Patients with non-tumour related deaths were excluded (see Figure 1 for details). All wax block sections were reviewed by two independent, experienced pathologists. This study and related use of the patients’ samples were approved by the Ethics Committee of The Affiliated Hospital of Qingdao University, and all the participants gave informed consent before taking part. 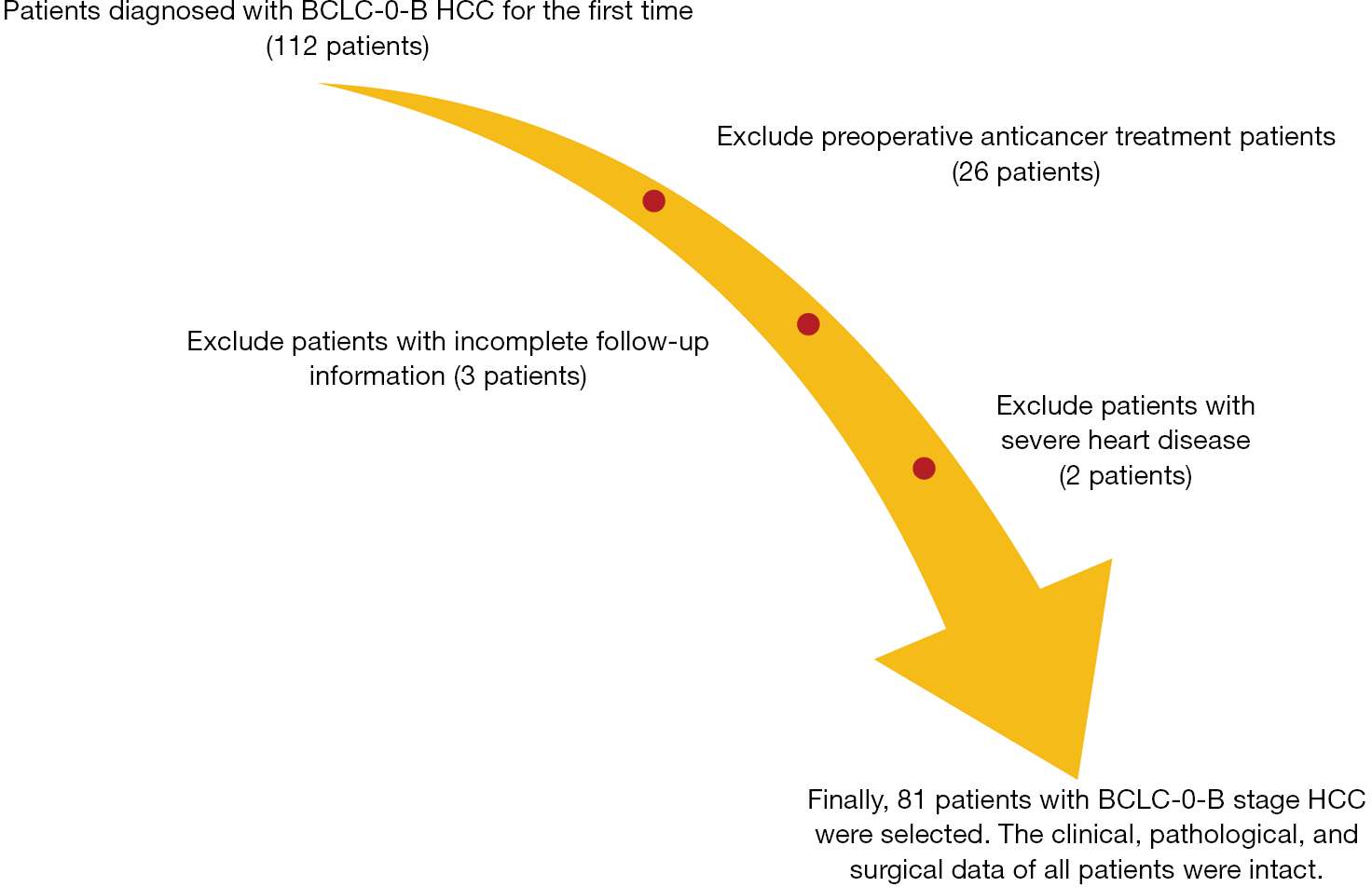 All 81 wax specimens were serially sectioned to a thickness of 4 µm. TNF-α and NF-κB were measured using immunohistochemistry, and rabbit anti-human NF-κB and TNF-α antibodies were purchased from Abcam, USA. Two pathologists, who were blinded to the clinical data, interpreted the results simultaneously. If the interpretations were different, the results were discussed with a third party until a consensus was reached. Under an optical microscope, positively stained cells displayed yellow or brown coloring in the cytoplasm. A total of ten fields were observed under high magnification (×400), and the percentage of positive cells was calculated. Cells without coloring scored 0, while those displaying light yellow, brown and tan scored 1, 2 and 3 points, respectively. A second score was obtained by determining the percentage of positive cells: <5%, ≥5%, ≥26%, ≥51% and ≥75% scored 0, 1, 2, 3 and 4 points, respectively. The two scores were summed, and a total of ≤4 represented low expression levels, while a score of >4 represented high expression levels. All patients were divided into high or low groups according to the results from the IHC. Patients with high expression levels of TNF-α and NF-κB were classified as the high expression group, while those with low expression levels of TNF-α and NF-κB, high TNF-α and low NF-κB, or low TNF-α and high NF-κB expression levels were designated as the low expression group. Additional, serum aspartate aminotransferase (AST) level are lower than or equal to 42 U/L was considered low group, serum AST level are higher than 42 U/L was considered high group. 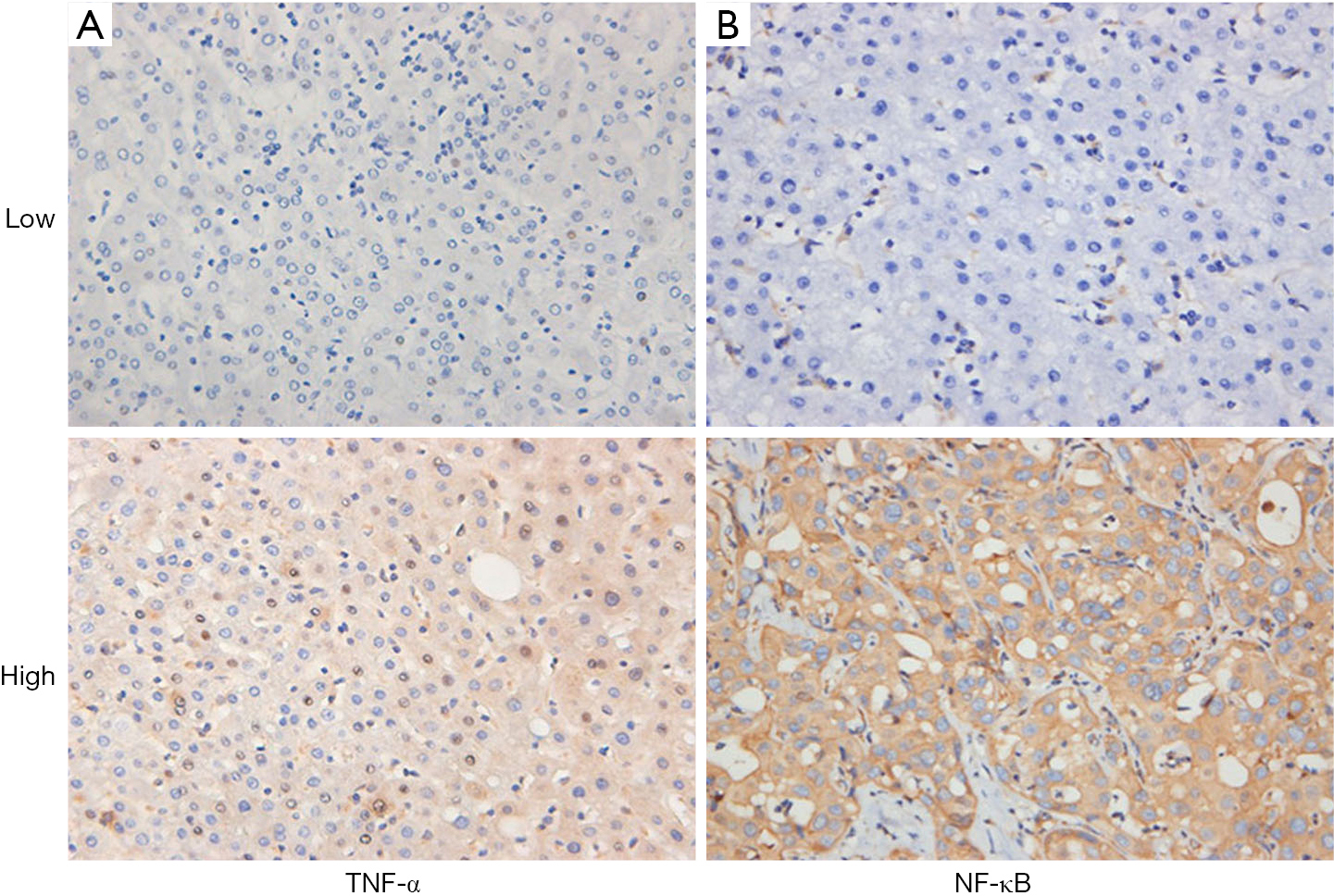 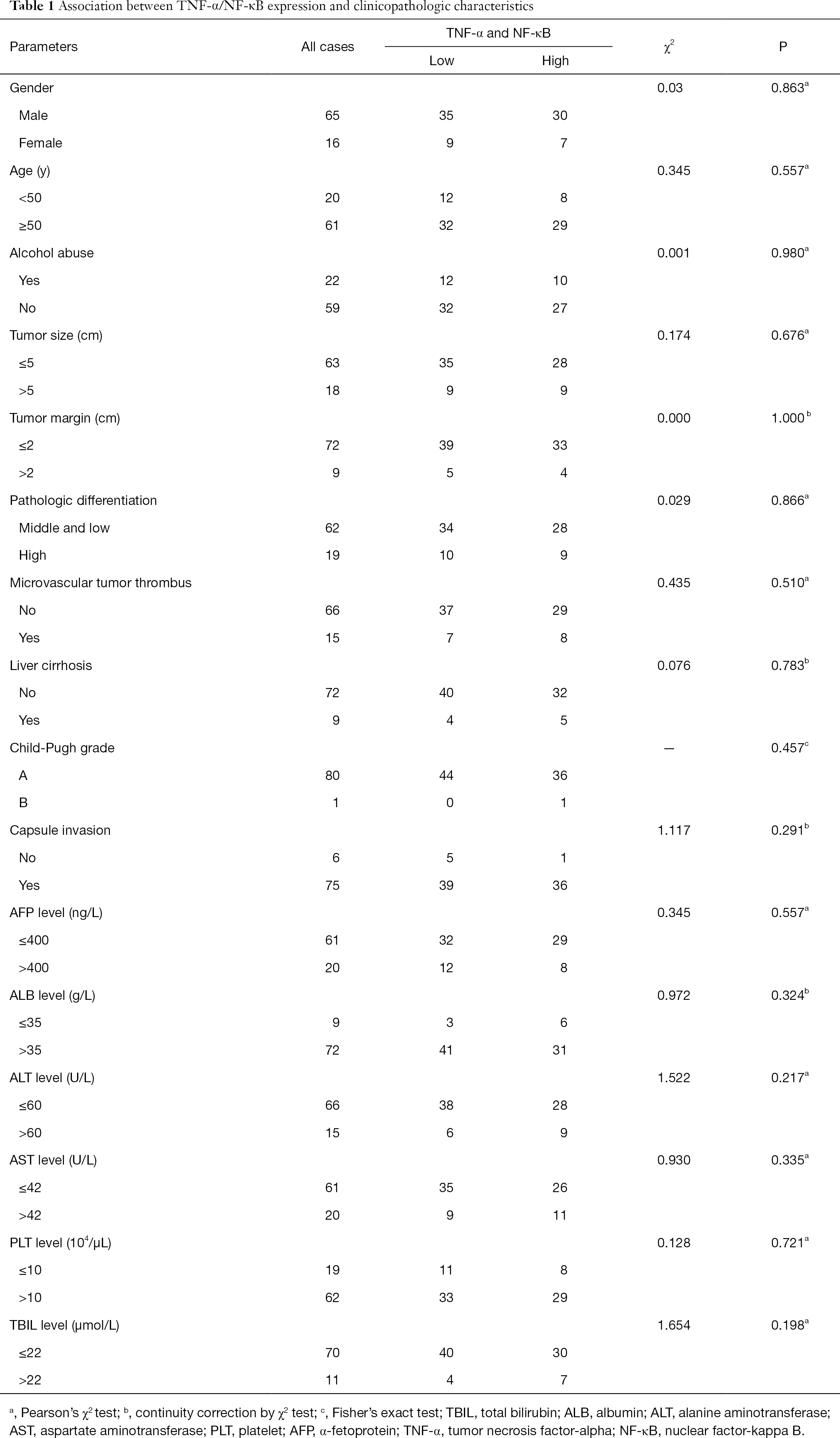 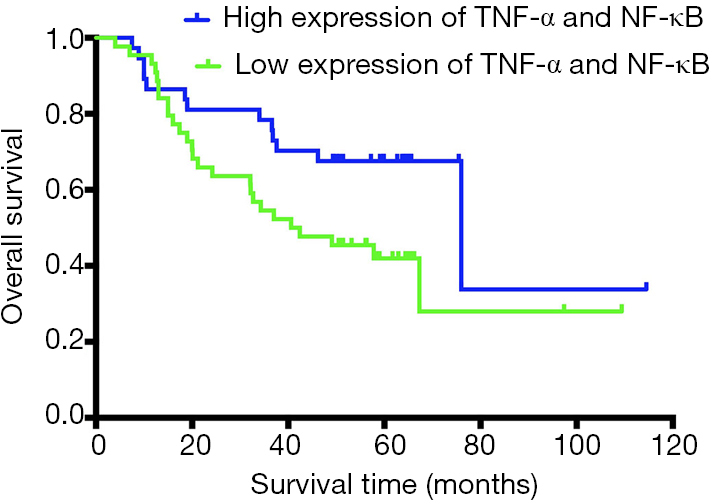 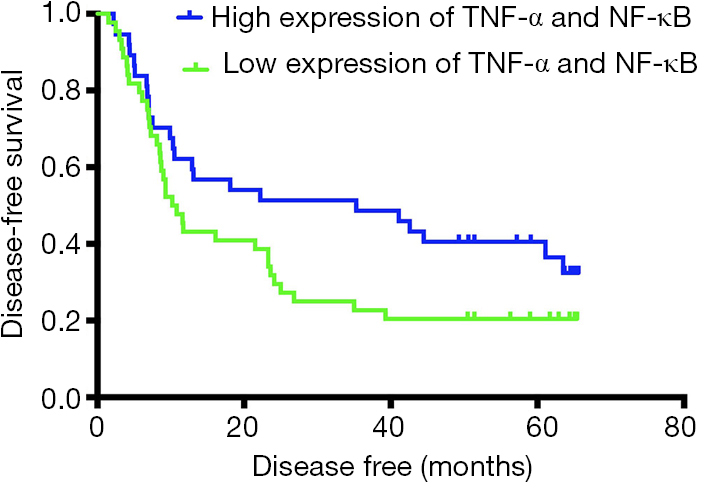 Based on the high and low levels of TNF-α and AST, we divided 81 patients with HCC into four groups for Kaplan-Meier analysis. The median OS (37 vs. 76 vs. 32.1 vs. 36.8 months, P=0.03, Figure 5) in four groups showed that patients with high expression of TNF-α and low-level AST had the longest survival time compared with other groups. The difference was statistically significant. 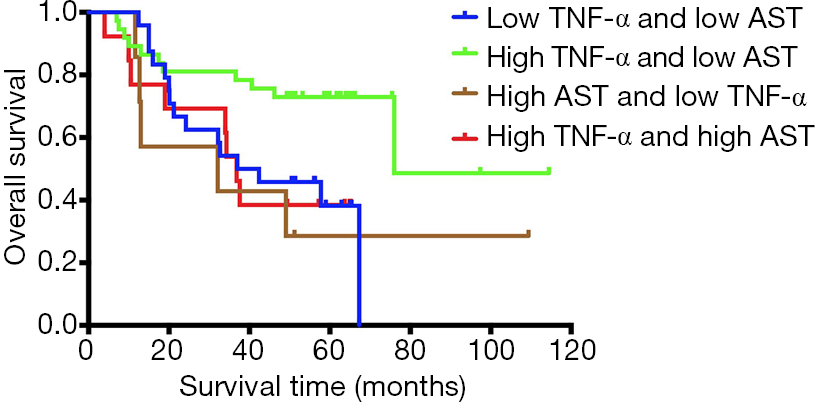 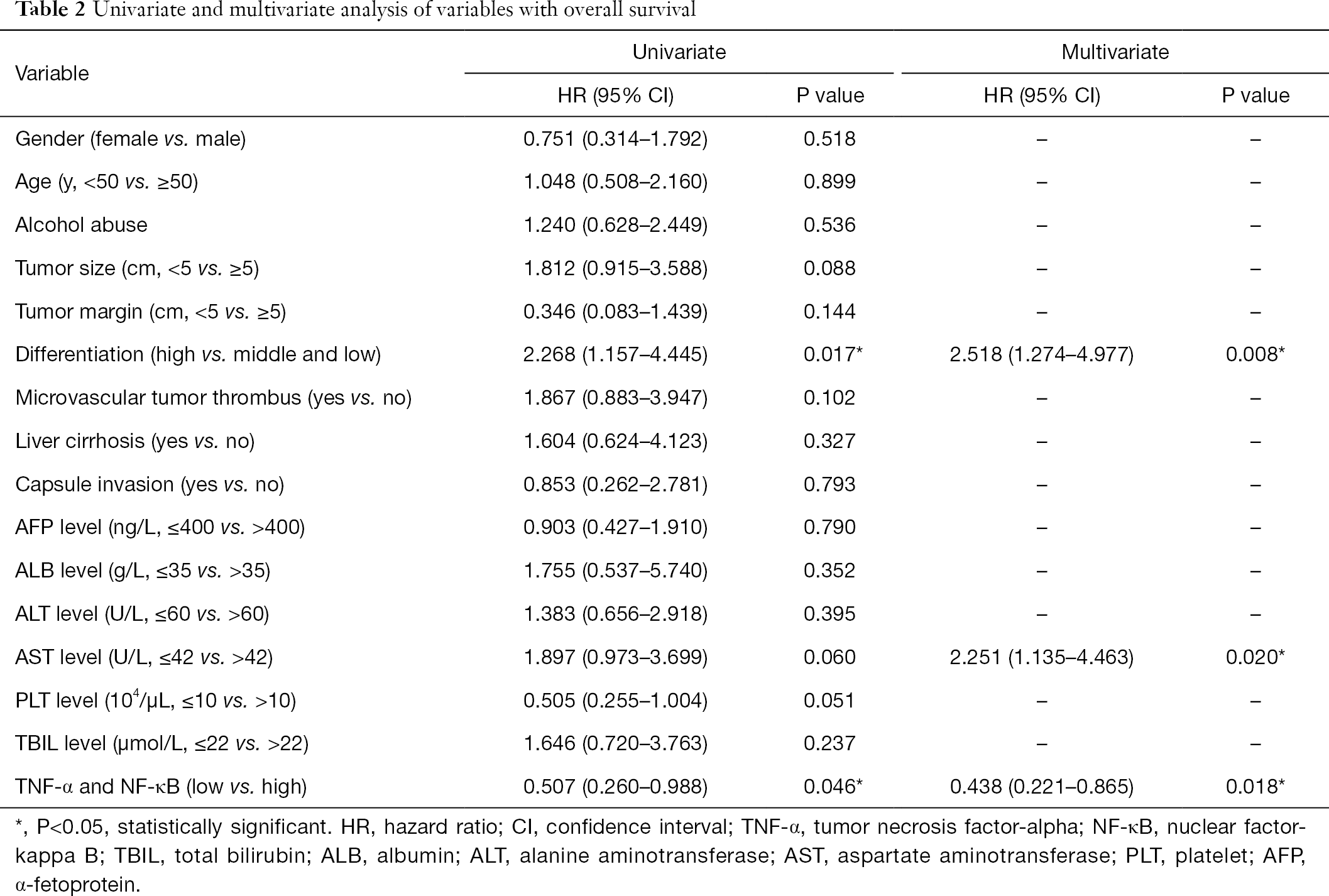 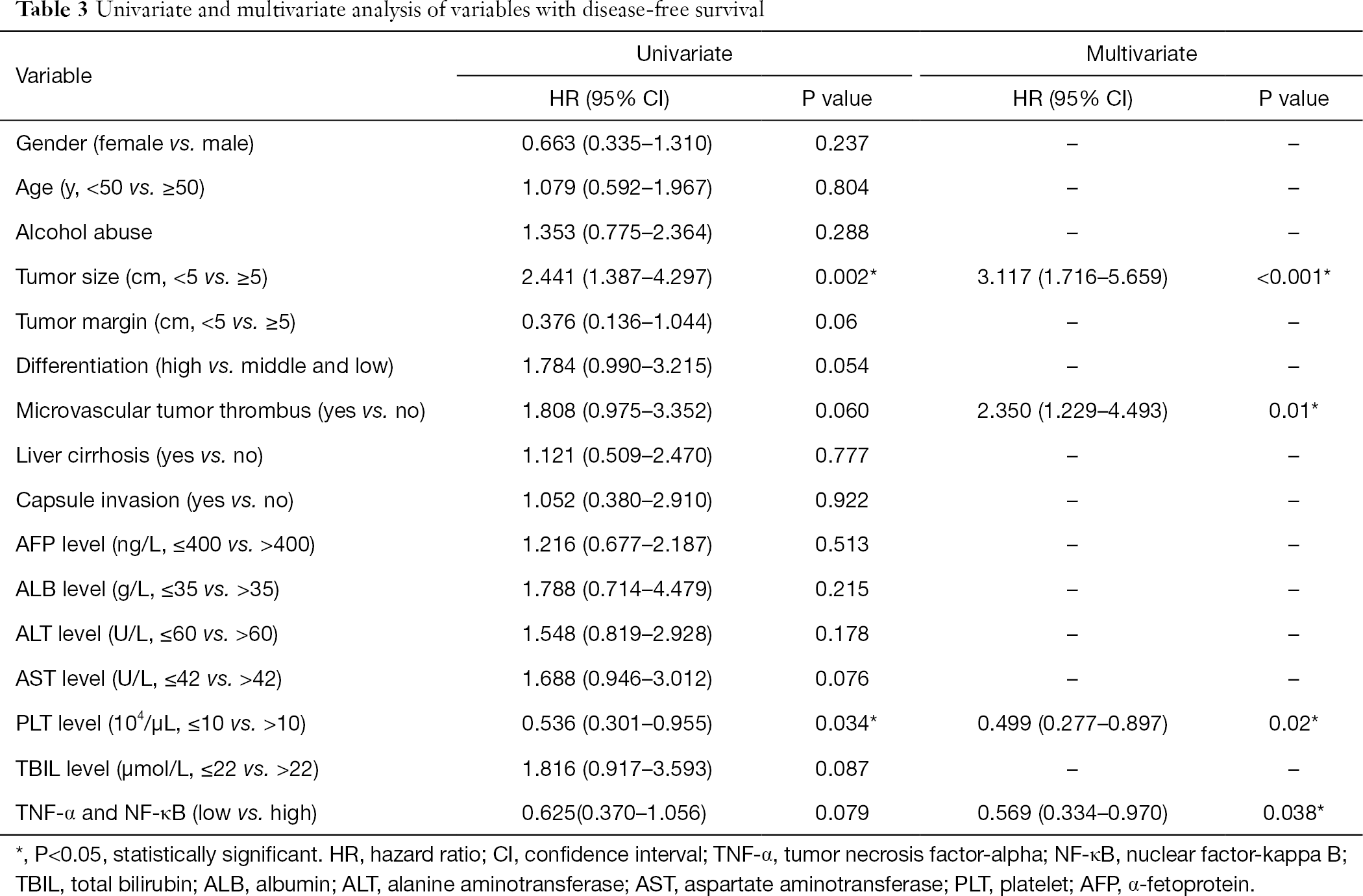 Most patients with HCC are asymptomatic in the early stages and have reached an advanced stage or metastasis at the time of diagnosis. The effects of surgery, radiotherapy and chemotherapy are not significant at that stage. In recent years, an increasing number of studies have shown that inflammatory factors are inseparable from the development of HCC (17-19).

In the current research, we demonstrated that patients with high expression of TNF-α and NF-κB in HCC tissues had longer survival times than those with low expression of TNF-α and NF-κB. The survival difference between these two groups was statistically significant (P<0.05, Figure 3). TNF-α has been demonstrated to be an anti-tumour cytokine and to activate NF-κB formation (20,21). The HepG2 cell line, when treated with miRNA-491_5p, showed sensitivity to TNF-α and increased apoptosis (22). Interestingly, studies have shown that transfection of the human TNF-α gene into mice results in a significant increase in the number of hepatic metastases, demonstrating higher metastatic potential and mortality (23,24). These studies have shown a close relationship between TNF-α and NF-κB and confirmed that TNF-α plays a dual role in the development of tumours. Multidrug resistance 2 (Mdr2) gene knockout mice inhibit the progression of HCC by inhibiting TNF-α or NF-κB in the late stage of tumour development (15). Related studies have also shown that the elimination of the IkappaB kinase (IKK) subunit NF-κB essential modulator (NEMO, also known as IKKγ) can prevent the activation of NF-κB, thereby preventing tumour progression (25). Moreover, NF-κB is over-expressed in primary HCC tissues, and its level there is significantly different to that in normal liver tissues adjacent to the cancer (26). These studies mainly indicate the anti-tumour apoptosis effect of NF-κB. Although both TNF-α and NF-κB can promote tumour progression, based on our analysis, patients with high expression of TNF-α and NF-κB have longer survival times. This effect may occur because high expression of TNF-α and NF-κB is associated with the activation of certain anti-tumour pathways. The mechanism of action between TNF-α and NF-κB is not fully understood. thus, research addressing inflammatory factors in the tumour microenvironment of HCC requires further exploration.

Related studies have shown that AST levels can be an independent risk factor for HCC (27), elevated AST levels are significantly associated with HCC (28), and AST levels are associated with HCC progression, with higher levels corresponding to more advanced progression (29). Our study also showed that high expression of AST is an independent risk factor for postoperative survival in patients with HCC (HR =2.251, P=0.02, Table 2), and the risk of postoperative death in patients with high AST expression is 2.251 times higher than that of patients with low expression. Serum AST is released from damaged hepatocytes into the blood, and their activity has been widely recognized as a marker for the detection of hepatitis, which further suggests the importance of inflammatory factors in HCC microenvironment. Therefore, we suggest that AST can be used not only as a monitoring indicator for early HCC but also early treatment to reduce the degree of tumour malignancy. The regulation of AST after surgery is also a means to prevent recurrence and improve patient survival time. Studies have also shown that injection of anti-tumour drugs into animals with induced HCC can cause a linear increase in serum TNF-α and a dose-dependent decrease in serum AST concentrations (30), which is consistent with our findings. Both high TNF-α and low AST levels are beneficial for postoperative patients. In addition, the treatment of an HCC rat model with β-carotene can lead to increased levels of TNF-α and decreased AST levels in rats (31), which further confirms our conclusion. We divided 81 patients with BCLC-0-B HCC into four groups according to the high and low levels of TNF-α and AST. The effects of TNF-α and AST on the prognosis of patients were further analyzed. The results showed high expression of TNF-α and low-level AST patients with HCC have the best survival time, and the difference was statistically significant (P=0.03, Figure 5), which further validates our conclusions, and we will go deeper into the study of inflammatory factors in future studies.

The research and writing of this thesis were completed under the careful guidance of my teacher and maoge. I would like to extend my sincere gratitude and lofty respect to them.

Ethical Statement: This study and related use of the patients’ samples were approved by The Ethics Committee of the Affiliated Hospital of Qingdao University, and written informed consent was obtained from the patient for publication of this manuscript and any accompanying images.