Fresh prostate cancer samples were collected from the 2nd Hospital of Tianjin Medical University and Tianjin Institute of Urology including 31 benign prostates, 29 localized primary cancer tissues harvested from radical prostatectomy and 12 lymph node metastasis tissues. The cancer specimens were immediately frozen in liquid nitrogen after surgery and were stored in −80 °C freezer. This study was approved by the research ethics committee of the Second Hospital of Tianjin Medical University. Clinical information of these samples was provided in Table S1.

miR-451 mimics or scramble were synthesized by Sangon Biotech Co., Ltd., Shanghai, China. In a ‘rescue’ experiment, MIF coding sequence without its 3'-UTR was cloned into a pcDNA3 vector (Thermo Fisher Scientific). The miR-451 mimics or scramble or pc-MIF vector were transfected into C4-2 or PC3M cells together or separately for 48 hours by Lipofectamine 2000 (Thermo Fisher Scientific) according to the manufacturer’s instructions. The final concentration of mimics and scramble RNA is 25 nM.

The culture medium was removed from the culture dish and the cells were rinsed with PBS gently. RIPA lysis buffer was added into the dishes to prepare the total protein of cells. The protein concentration was measured using the BCA protein assay (Beyotime Institute of Biotechnology, Shanghai, China). The protein concentration was adjusted to 1 µg/µL and 10 µg of protein was loaded per lane. The Anti-MIF antibody (R&D Systems) was used for detecting MIF expression and an anti-Actin antibody (Sigma-Aldrich) was used for detecting actin as the loading control. Immunoblotting signals were detected using the Super Signal West Pico Chemiluminescent Substrate Kit (Pierce Biotechnology).

Uncoated transwell chambers and modified Boyden chambers (BD Biosciences) with 8 µm pore size were used to examine the cell migration and invasion ability respectively. In brief, C4-2 or PC3M cells were suspended in serum-free medium and were seeded to the upper chambers. The medium containing 5% fetal bovine serum was added to the lower chambers. The cells and chambers were incubated at 37 °C for 22 hours. After incubation, cells that were adhered to the upper surface of the chamber were wiped off. The cells on the lower surface were fixed, stained with crystal violet and counted under a light microscope.

Data are presented as mean ± SD. Statistical analyses were performed using GraphPad Prism 6 (GraphPad Software). Two-tailed Student’s t-test was used for comparisons between every two groups in all relevant experiments. The relationship between MIF and miR-451 expression was assessed using Pearson’s correlation analysis. The significance threshold is set at P<0.05 to indicate statistical significance.

To have a better understanding of the mechanisms underlying miR-451 regulated prostate cancer metastasis, we identified MIF as a potential target gene of miR-451 using TargetScan Release 7.0 (Figure 2A). To validate MIF is a direct target gene of miR-451, we used a luciferase reporter assay by cloning the wild-type MIF 3'-UTR sequence or a mutant one (Figure 2A) into a psiCHECK-2 vector and co-transfecting the vector accompany with miR-451 mimics or scramble sequence into C4-2 cells. Transfection of miR-451 mimics significantly inhibited the luciferase activity of reporter with wild-type 3'-UTR of MIF (P<0.01), but not that with the mutant 3'-UTR. As expected, transfection of scramble sequence didn’t inhibit the activity of luciferase of the reporter with wild-type 3'-UTR of MIF (Figure 2B).

Figure 2 Direct interaction between miR-451 and MIF. (A) The seed sequence of miR-451 in the 3'-UTR of MIF is indicated; (B) the luciferase activity in C4-2 cells transfected with miR-451 mimics is significantly decreased compared to the miR-NC treated cell. The cells transfected with the mutant 3'-UTR of MIF don’t show a change in luciferase activity. Transfection of scramble sequence didn’t inhibit the activity of luciferase either. **, P<0.01. UTR, untranslated region.

Consistent with the luciferase assay results, the mRNA and protein expression of MIF in miR-451-overexpressed cells was apparently decreased compared to those of the cells transfected with scramble sequence (Figure 3A,B). Furthermore, analysis of RNA expression data of clinical prostate cancer samples showed a strong negative correlation between the expression of miR-451 and MIF, supporting MIF is a direct target of miR-451 in prostate cancer (Figure 3C,D). 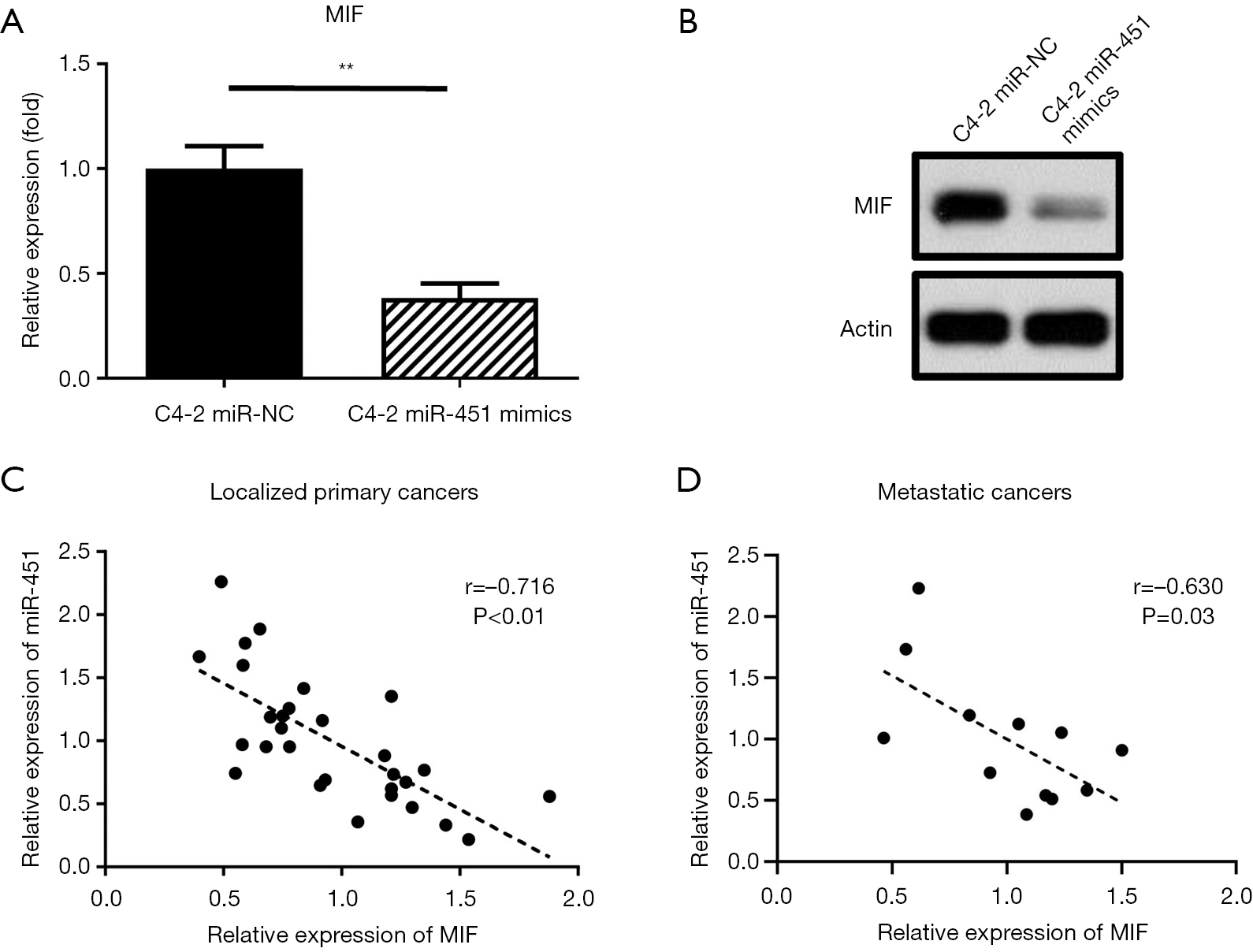 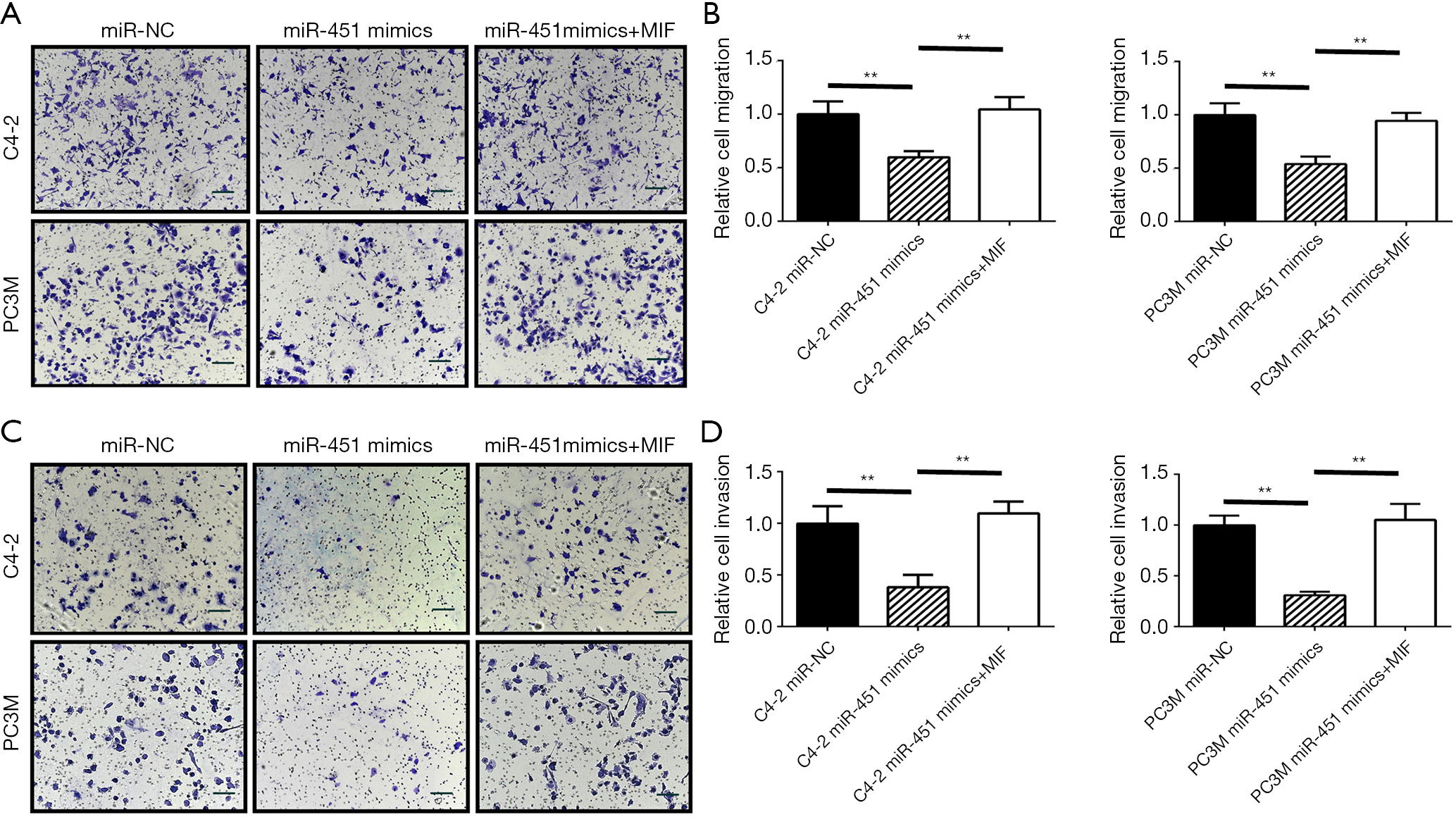 Most deaths caused by prostate cancer are related to tumor metastases that are highly resistant to the treatment. However, the mechanisms underlying prostate cancer metastasis is not completely understood. MicroRNAs, small RNA molecules that regulate gene expression post-transcriptionally, have been reported to play a key role in cancer development and progression (10). miRNA-451 was observed to be deregulated and act as oncogene or tumor suppressor miRNA in various types of cancers, suggesting a context-dependent effect. However, its role in prostate cancer is not clear.

A few target genes of miR-451 have been reported in different types of cancer, such as CAB39, RAB14, 14-3-3§ and MIF, have been identified (13-15). MIF is a proinflammatory cytokine and its increased expression has been observed in various types of tumors, such as lung, colorectal, breast, cervical, prostate, and head and neck cancer (16). The increased MIF expression plays a crucial role in cell proliferation, invasiveness and tumor-induced angiogenesis (17-21). The inhibition of MIF or its receptor (CD74) can attenuate prostate cancer cell growth and invasion (22,23). In our study, we proved the direct binding of miR-451 and 3'-UTR of MIF in prostate cancer cells. We also further confirmed that MIF protein expression was decreased in C4-2 prostate cancer cells transfected with miR-451 mimics compared with the cells transfected with scramble sequence by Western blotting analyses. Moreover, we observed a strong negative correlation between the expression of miR-451 and MIF. Functionally, overexpression of MIF in C4-2 and PC3M prostate cancer cells transfected with miR-451 mimics can reverse the effect of miR-451. These data suggested that miR-451 may directly control MIF protein expression and further regulate cell growth, migration, and invasion in prostate cancer. Our results are consistent with the findings reported in gastric cancer and nasopharyngeal carcinoma (24,25).

Funding: This work was supported by Tianjin Science and Technology Commission (No: 13RCGFSY191000).

Ethical Statement: The study was approved by the research ethics committee of the Second Hospital of Tianjin Medical University (No. KY2018K090).