Stereotactic radiosurgery (SRS) is a well-established therapy for the management of intracranial metastasis (1). Over half of cancer patients who develop brain metastasis present with more than one lesion (2), and SRS is increasingly used in patients with multiple lesions. Importantly, randomized controlled trials have demonstrated the efficacy of SRS for the treatment of one to three (3), two to four (4), and one to four (5) metastases. Moreover, recent retrospective studies have demonstrated the benefit of SRS for managing greater than four lesions from various primary tumor types (6-8).

SRS allows for delivery of large doses to well-defined target volumes by generating highly conformal dose distributions. Several forms of SRS have been developed over the past few decades, and each type varies in how it achieves precise target irradiation. Gamma Knife (Elekta, Stockholm, Sweden), CyberKnife (Accuray Inc., Sunnyvale, California), and conformal radiotherapy delivered by linear accelerators (linacs) use one or more isocenters and typically involve patient repositioning during a single session and sequential treatment of multiple lesions (9). More recently, intensity modulated SRS (IMRS) has been utilized for its ability to vary the intensity of small beams that are segmented by a multileaf collimator (9,10). This technique enhances dose conformity, especially for large and irregular lesions, and decreases dose to healthy brain tissue (11,12). As with prior SRS techniques, IMRS for patients with multiple intracranial metastases has typically been delivered in a sequential fashion (12).

Compared to traditionally fractionated radiotherapy, SRS for the treatment of multiple lesions provides the entire dose in a single fraction on a single day. However, more time is required to deliver a SRS fraction. Moreover, separate lesions are typically treated in sequential fashion using discrete isocenters, with treatment time proportionate to the number of isocenters and lasting up to several hours. Patient tolerance of SRS becomes more important with longer treatment sessions since it may be uncomfortable to lay immobilized for extended periods. In addition, lengthy treatment times may disrupt treatment schedules since a single patient occupies a treatment machine for several hours, particularly at facilities without a dedicated SRS machine.

With intensity modulation, it is now possible to design SRS treatment plans for multiple intracranial metastases using a single isocenter. In doing so, one can simultaneously treat multiple targets without requiring isocenter shifts, thereby significantly reducing treatment times (13). Such an approach is advantageous to both patients and clinicians in busy clinics. We recently published on the dosimetric implications of our single-isocenter IMRS technique and demonstrated that uniform target coverage with minimal excessive dose to normal tissues is feasible (14-17). However, clinical outcomes are not well described. In this report, we present our clinical experience using this approach in patients with multiple intracranial metastases.

Retrospective review of radiation oncology records was performed after obtaining institutional review board approval. This report includes all 100 patients consecutively treated with single-isocenter, frameless IMRS for multiple intracranial metastases between March 2006 and March 2012 at a single institution. Patients with intracranial metastatic disease that was histologically confirmed at either the primary or metastatic site were eligible for treatment if they could lie still and tolerate simulation.

Patient characteristics are summarized in Table 1. Patients had a median of 4 intracranial metastases (range, 2-18). A total of 465 intracranial metastases were treated in a median of 1 fraction (range, 1-5) to a median dose of 20 Gy (range, 15-50 Gy). Twelve patients (12%) were treated with more than one fraction. Of these 12 patients, 6 had previously been treated with WBRT. The remaining 88 patients (88%) were treated in a single fraction. The maximum target diameter as determined by contrast enhanced T1-weighted magnetic resonance imaging (MRI) was less than 4.0 cm in all but two patients—one patient with a 4.0 cm lesion and another with a 4.3 cm lesion. In total, 29 patients were treated for progressive or recurrent intracranial disease after surgical resection, WBRT, or prior SRS. Seventeen patients (17%) received WBRT prior to presentation, while the remaining 83 patients (83%) did not. Salvage therapy was offered to patients with recurrent local disease or new intracranial metastases and consisted of surgical resection, WBRT, or repeated frameless IMRS. 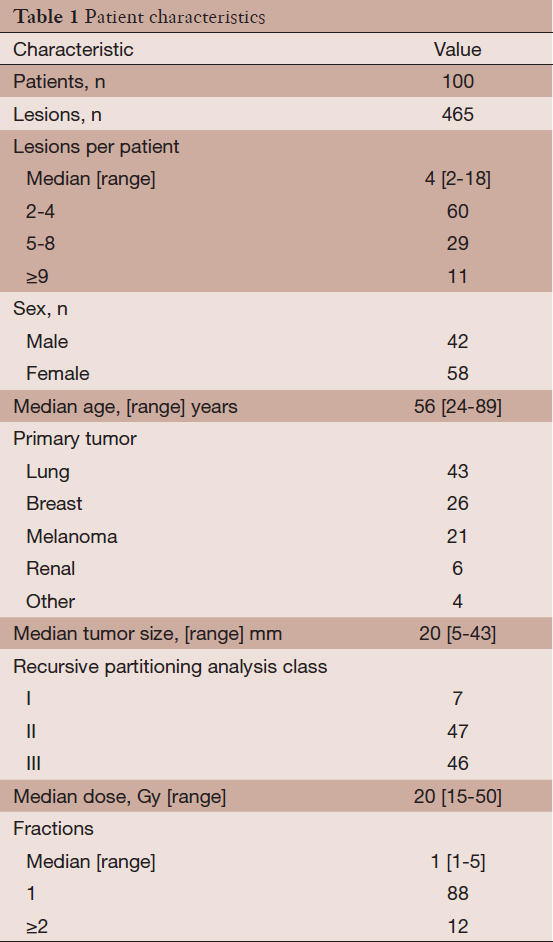 After obtaining informed consent, patients underwent stereotactic-protocol contrast enhanced T1-weighted brain MRI (26 cm field-of-view, 512×512 pixel size, 1.5 mm slice intervals) using a 3.0 Tesla Scanner (General Electric, Fairfield, Connecticut). A detailed description of our patient simulation and setup techniques has been previously published (16). Notably, we have more recently begun immobilizing patients without the use of a bite block in favor of surface image guidance (SIG) in real-time with the AlignRT system (VisionRT Ltd, London, United Kingdom). As previously described, these patients also underwent simulation non-contrast CT for treatment planning purposes (17). Planning target volumes (PTVs) for each lesion were generated by adding a 1 mm margin to each clinical target volume (CTV). Dose was prescribed to the 90% isodose curve relative to a reference point within a lesion. Beam arrangement consisted of 9-13 fields permissive of 30-50% coplanar overlap. Patient position was continuously monitored with SIG, with a beam hold initiated for deviation exceeding a predefined translational threshold of 1-2 mm or a rotational threshold of 1° (17). Volumetric modulated arc therapy was used for 15 patients. Median minimum and maximum PTV coverage was 90% and 113%, respectively.

Patients were routinely seen one week following IMRS for clinical examination. Thereafter, intracranial progression was assessed by physical evaluation and contrast enhanced MRI every 3 months for 18 months, with additional surveillance determined on a case-by-case basis. Treatment response was analyzed by local control, regional control, and overall survival. Local control was defined as the absence of disease progression, with progression radiographically defined as an increase of greater than 25% of the sum of the two largest diameters of the lesion per Revised Assessment in Neuro-Oncology (RANO) criteria (18). Regional control was defined as the absence of new intracranial metastatic disease occurring outside the treatment volume on radiographic examination. Intracranial status was deemed unknown if radiographic examination had not been obtained by the time of analysis. These patients were excluded from local and regional control analyses but were included in survival analysis. Local control and regional control from the date of treatment were estimated by the Kaplan-Meier method, as was overall survival from the date of diagnosis. Event times were censored at the time of last follow-up for patients without an event at the time of analysis. Toxicity was graded according to the Radiation Therapy Oncology Group scale (19). Statistical analyses were performed using R version 2.15.1 (http://www.R-project.org). Separate forward conditional multivariate analyses was performed using Cox proportional hazards regression modeling to assess factors predictive of either survival or local control, as per other SRS reports (6,16). P values for multiple comparisons were adjusted using the Holm method. 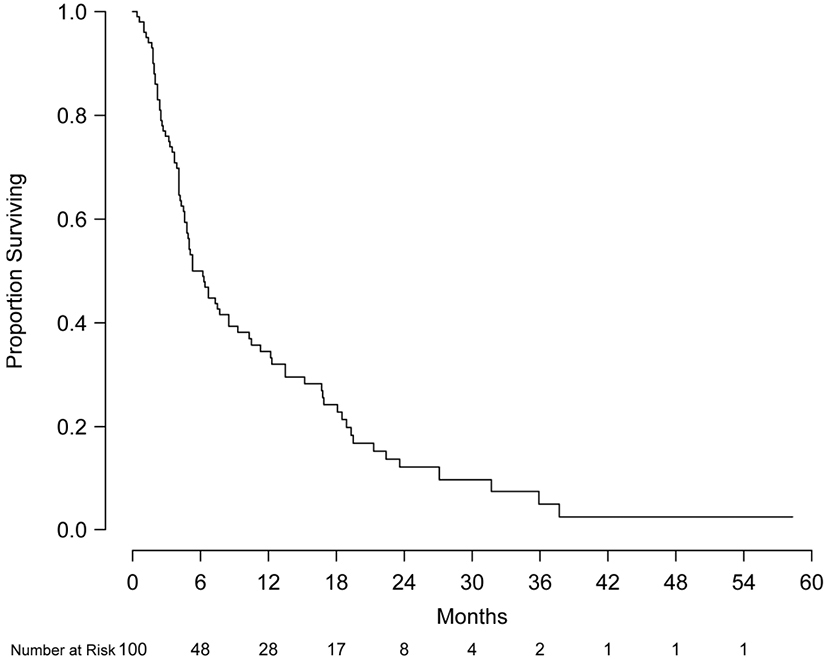 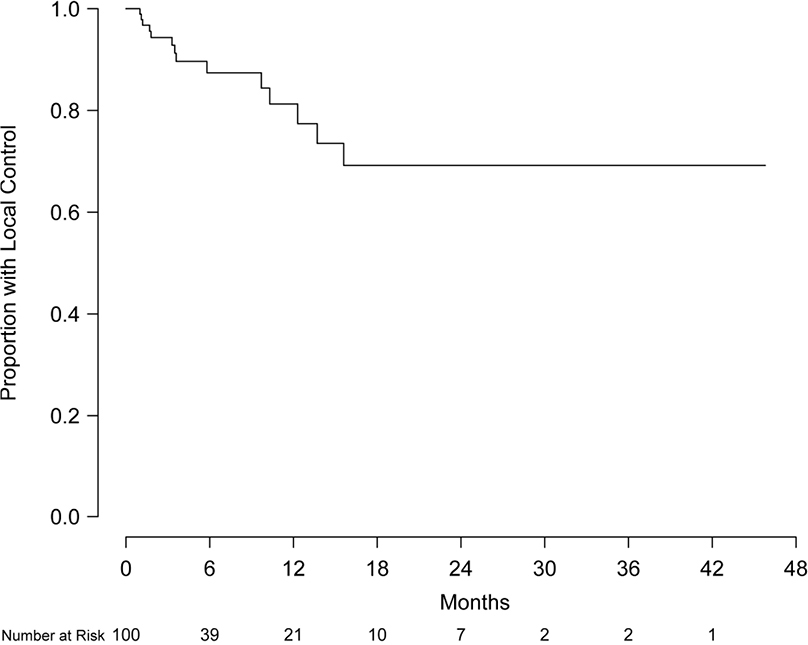 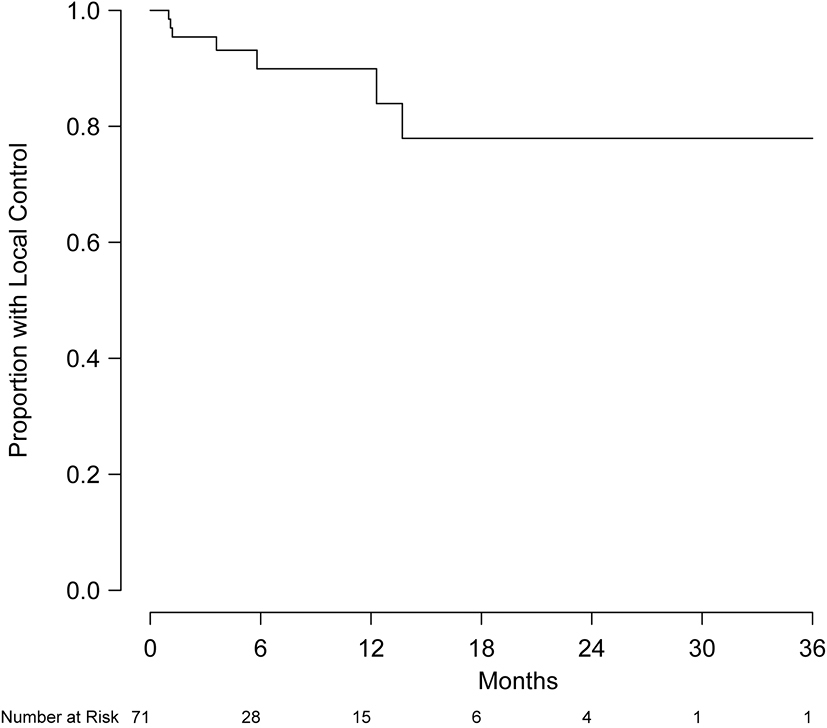 Figure 3 Kaplan-Meier estimate of local control for patients without prior treatment. 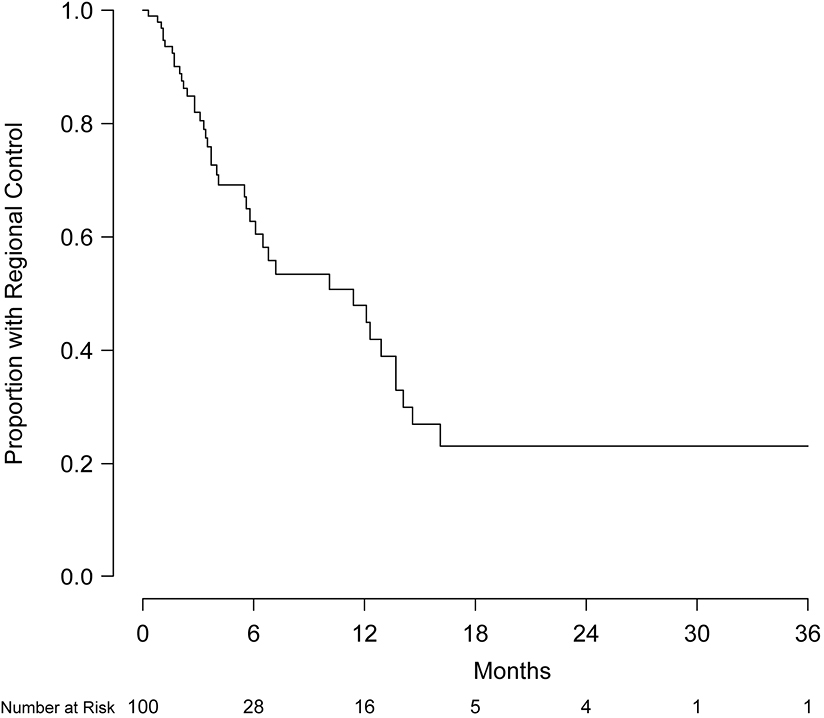 Acute treatment-related toxicity occurred in six patients (6%). Two patients suffered acute grade 3 events; one developed hemiparesis secondary to hemorrhage of a treated lesion 8 days after radiotherapy, and another experienced weakness secondary to edema responsive to steroids but requiring hospitalization for initial management. Late treatment-related toxicity was observed in four patients (4%). Late grade 3 toxicity occurred in two patients. One patient developed radionecrosis requiring corticosteroids and surgical intervention after receiving 20 Gy to two lesions that were 2.9 and 2.7 cm in largest diameter. Another patient developed seizures secondary to biopsy-proven radionecrosis requiring hospitalization for initial management 18 months after receiving 18 Gy to three lesions that were 2.4, 1.7 and 0.2 cm in largest diameter. No grade 4 acute or late events were observed. Mean dose to normal brain was 3.4 Gy, and no discernible relationship between dose to normal brain and toxicity was observed.

A significant advantage of our technique is reduced treatment time, particularly in comparison to frame-based strategies. In this series, a median of 4 lesions was treated in a median of 17.2 minutes with a median beam-on time of 6.25 minutes. Although treatment time increased with number of intracranial metastases, patients with ≥9 lesions were treated using a single isocenter in a median of only 23.8 minutes. In comparison, a recent efficiency analysis reported a median treatment time of 37.8 minutes for four isocenters using linac-based SRS, with total time increasing as a function of number of isocenters (13). Moreover, treatment times with Gamma Knife for multiple intracranial lesions may last several hours with median beam-on time reported to be about 50 minutes (16). Given its reduced treatment time, a noninvasive, single-isocenter approach to IMRS for multiple lesions is not only feasible but appealing to both patients and providers in high volume clinics.

Accuracy and precision are critical for frameless treatment delivery. Importantly, SIG IMRS has been demonstrated to have excellent accuracy, with preclinical results comparable to cone beam computed tomography and infrared marker tracking (20-22). However, the clinical efficacy of this approach is not well described. In the current study, we observed local control at 12 months in 81.5% of patients, and 94% of lesions in this series were without evidence of progression at the time of analysis. Furthermore, 71% of patients presented de novo without prior treatment for intracranial disease. For these patients, local control at 12 months was 83.9%, with 96.6% of lesions without evidence of progression at the time of analysis. This compares favorably to both frame-based and frameless series. Published series of frame-based SRS for intracranial metastasis consistently demonstrate local control at 12 months ranging from 64% to 90% (6,23-27). Similar local control rates have been published with frameless approaches (28-30). Therefore, our single-isocenter approach to the simultaneous treatment of multiple lesions was associated with reduced treatment time but not diminished local control.

The role of SRS in the initial management for patients with multiple brain metastases is debated. One concern with upfront SRS is the possibility of missing occult micrometastases outside the treatment volume. Several retrospective series of SRS for intracranial metastasis have reported regional failure at 12 months ranging from 40% to 64% (6,26,27,31). In the present study, intracranial failure outside the treatment volume at 12 months was 47.9%. At the time of analysis, 25% of patients had received salvage therapy for regional failure, with treatment most frequently consisting of additional SRS. Therefore, although regional failure is a significant concern, additional SRS is a feasible approach to management.

In addition to regional failure, treatment-related toxicity is a significant consideration in managing intracranial disease. For example, although WBRT treats micrometastases, it has been associated with both subjective and objective neurocognitive decline (32,33). Meanwhile, published series of SRS using multiple isocenters support low rates of toxicity ranging from 5-15% (5,26,27,29,34,35). Comparable to other series, acute and late grade ≥3 treatment-related toxicities were uncommon in this study at 2% and 2%, respectively. Thus, single-isocenter IMRS was associated with low toxicity and ultimately decreased the risk of neurocognitive decline in the majority of patients (61%) who remained free of failure outside the treatment volume.

Prognosis for patients with intracranial metastasis is poor. Median survival time in retrospective series of both frame-based and frameless SRS is less than 1 year (7,27-29,31). In randomized trials, overall survival at 12 months ranges from 28-45% with SRS alone (5,34). Overall survival of 34.1% at 12 months in this series is comparable to published data. Consistent with other studies, the number of intracranial lesions was inversely correlated with survival (35-37). Therefore, our single-isocenter approach does not appear to come at the cost of inferior outcomes.

As cancer therapies become more effective and the prognosis of patients with brain metastasis improves, treatment-related toxicity and patient quality of life become more important. Given its relatively low toxicity profile, SRS is an appealing option for the initial treatment of intracranial lesions. Moreover, single-isocenter frameless IMRS for the simultaneous treatment of multiple intracranial metastases appears to produce clinical outcomes comparable to conventional frame-based SRS techniques with the advantages of a noninvasive approach and shortened treatment time.

While our data is promising, its conclusions are limited. As a retrospective study from a single institution, this series is susceptible to all the inherent biases and shortcomings of such analyses. Ultimately, a prospective study would best assess the role of single-isocenter frameless IMRS for multiple intracranial metastases.

Funding: This work was supported in part by National Institutes of Health grant PHSGM07198 (UCSD Medical Scientist Training Program). The funders had no role in study design, data collection and analysis, decision to publish, or preparation of the manuscript. This manuscript, in part, was presented at the 55th Annual Meeting of the American Society for Therapeutic Radiology and Oncology (ASTRO), Atlanta, GA, September 2013.