Prostate cancer (PCa) is expected to account for 19% of all new tumor cases and 8% of all cancer death in male of United States (1-3). The most typical metastatic pattern including the lymph node (LN) and bone metastases have been studied comprehensively (4-6). However, little attention has been focused on the risk factors and prognosis of atypical metastases including liver, brain, and lung metastases in stage IV PCa patients. Previous studies (1,7-9) reported that visceral involvement in PCa might be correlated to worse survival outcomes. The visceral metastatic site and frequency of occurrence were described based on a large population using SEER database. Population-base estimates of the incidence and prognosis of visceral metastases at diagnosis of PCa are lacking. The risk factors of visceral metastases and the impact of these risk factors on the survival of patients with stage IV PCa were investigated in this study.

The SEER database includes information on cancer incidence, therapeutic management, and survival outcomes for approximately 30% of the US population. Clinical data on the absence or presence of visceral metastases including brain, liver, and lung at the time of PCa diagnosis was released in 2017 for patients diagnosed as PCa from 2010 to 2015. The incidence rates of PCa were calculated in this study. All rates were adjusted to the 2000 US standard population and expressed by 100,000 person-years. The annual percentage changes (APCs) of incidence of PCa were calculated based on the data from 1973 to 2015. The APCs of incidence of metastatic PCa were calculated based on the data from 2010 to 2015.

Patients with confirmed age and active follow-up who were diagnosed as having a primary, stage IV PCa in the SEER database from 2010 to 2015 were identified. The diagnosis of PCa was confirmed as adenocarcinoma (NOS, 8140/3) pathologically. Patients with carcinoma in situ were not included in this study. Patients for whom the absence or presence of visceral metastases at diagnosis was unknown were excluded. Subsequently, patients who were diagnosed at autopsy or via death certification, as well as patients who had an unknown follow up, grade, T stage, N stage, M stage, were also removed.

The demographics and clinical characteristics across visceral metastatic groups were compared using the Chi-square test. The relationships between PSA and visceral metastases were explored by constructing smoothing plots. A two-piecewise linear regression model was used to conduct the threshold effect of PSA on visceral metastases according to the smoothing plot. Multivariable logistic regression was used to determine the risk factors associated with the presence of visceral metastases at diagnosis. Multivariable Cox regression was performed to identified covariates associated with overall survival (OS) and cancer-specific survival (CSS) using the same variables as in the logistic regression model described herein. Survival estimates were obtained using the Kaplan-Meier method. The National Cancer Institute’s Joinpoint Regression program, version 4.5.0.1 was used to calculate APCs (10). Statistical analyses were performed using R software (version 3.4.4; R Foundation). Two-sided P<0.05 was considered to denote statistical significance. 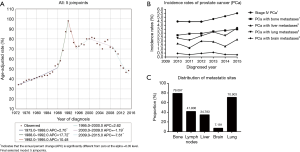 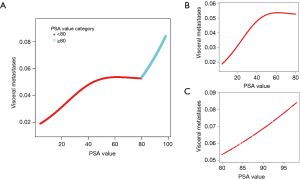 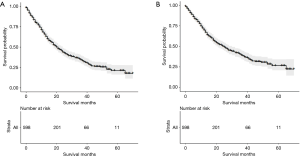 Figure 5 Kaplan-Meier curves demonstrating (A) overall survival and (B) cancer-specific survival in visceral metastatic prostate cancer patients with or without bone metastasis.

To date, the characteristics of potential risk factors of developing visceral metastases in PCa have not been thoroughly elucidated. It is clearly that PSA was associated with the survival outcomes of PCa. However, the clinical effects of PSA in predicting the risk of metastasis have not been well established. Stattin et al. (14) reported that the PSA could predict the long-term risk of metastatic PCa. Risk stratification of distant metastasis was conducted by PSA in former study. Vertosick et al. (15) stated that risk stratification conducted by PSA was far greater than that reported for race or other demographic characteristics. To the best of our knowledge, it is the first time to evaluate that predictive effect of PSA on predicting the risk of developing visceral metastases in patients with stage IV PCa. In this study, PSA was stratified into five groups and PSA >80 ng/mL was found to be as an independent risk factor for predicting visceral metastases in patients with stage IV PCa. PSA >80 ng/mL had 1.545-fold higher risk of developing visceral metastases compared with those with PSA <20 ng/mL.

Funding: This study was supported by () and ().

Conflicts of Interest: All authors have completed the ICMJE uniform disclosure form (available at http://dx.doi.org/10.21037/tcr.2019.05.31). The authors have no conflicts of interest to declare.

Ethical Statement: The authors are accountable for all aspects of the work in ensuring that questions related to the accuracy or integrity of any part of the work are appropriately investigated and resolved. Since all information from the SEER database has been de-identified and no identifying information was used in this analysis, informed consent is not required for use of SEER data.