Lung cancer is known as the leading cause of cancer-related death. Histologically, the adenocarcinoma is considered to be one of the most common forms of lung cancer (1). Anaplastic lymphoma kinase (ALK) rearrangements are identified in 4% of patients with non-small cell lung cancer (NSCLC), mostly in the form of echinoderm microtubule-associated protein-like 4-anaplastic lymphoma kinase (EML4-ALK) gene fusion (2). Both in vitro and in vivo studies have shown that EML4-ALK fusion genes act as strong oncogenic drivers and therapeutic targets in lung cancers (3,4). V-KI-RAS2 Kirsten rat sarcoma viral oncogene homolog (KRAS) mutations occur in approximately 20–30% of Caucasian patients with lung adenocarcinoma. Studies have shown that ALK gene arrangements are mutually exclusive with epidermal growth factor receptor (EGFR) and KRAS mutations (5,6).

Herein, we report a rare case of a patient with a lung adenocarcinoma co-existing EML4-ALK fusion gene, as well as a KRAS p.G13D mutation. We also report that the patient was sensitive to treatment with crizotinib, a tyrosine kinase inhibitor (TKI).

A 47-year-old, non-smoking female was referred to our hospital in January 2018 with a 1-month history of cough and phlegm. A chest computed tomography (CT) scan revealed a 5.0 cm mass in the left lower lung associated with multiple nodules in both lungs (Figure 1). Tumor biopsy pathology conducted on January 31, 2016, revealed that the patient had a stage IV (cT4N3M1) adenocarcinoma. Hematoxylin and eosin (H&E) staining revealed a typical morphology for adenocarcinoma cells (Figure 2). 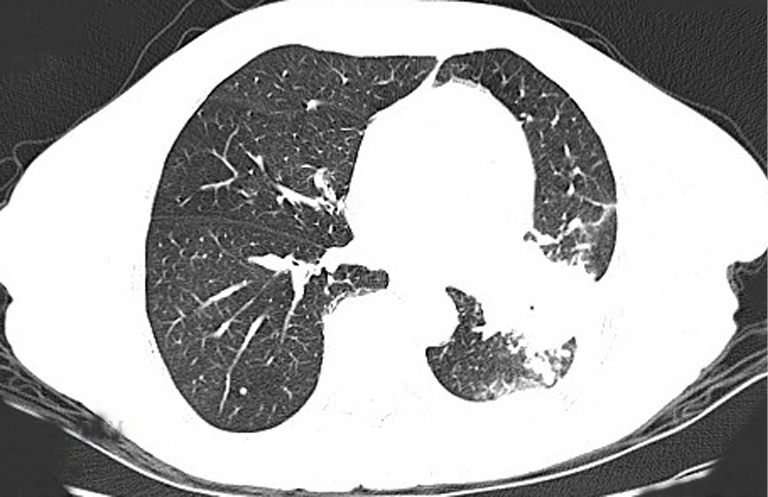 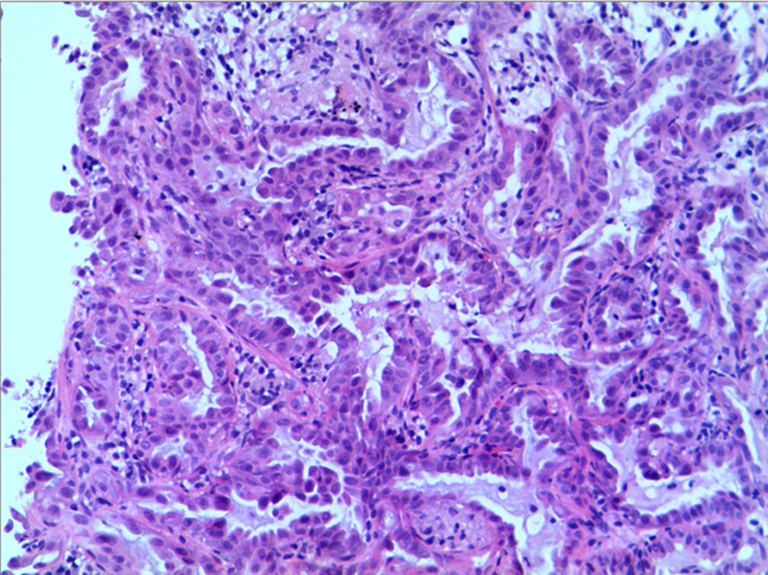 Thoracic radiotherapy followed by three cycles of chemotherapy with pemetrexed (750 mg) and cisplatin (40 mg) were administered between February 2018 and May 2018. However, emission computed tomography (ECT) revealed tumor progression after one month and gemcitabine (1.5 g) and nedaplatin (120 mg) were prescribed. Unfortunately, the patient relapsed in August 2018 and a tumor progression was observed. An next-generation sequencing (NGS) analysis of the hydrothorax revealed a variant of EML4-ALK fusion (the allele frequency: 16.6%) (Figure 3) accompanied by a point mutation of KRAS (p.G13D, the allele frequency: 15.7%) (Figure 4). Based on molecular findings, treatment was initiated with crizotinib in September, 2018. After 2 months of therapy, the patient achieved a partial response (Figure 5). Afterwards, the patient was further administrated with crizotinib for 6.0 months with a stable disease before tumor progression. Written informed consent was obtained from the patient for publication of this case report and any accompanying images. 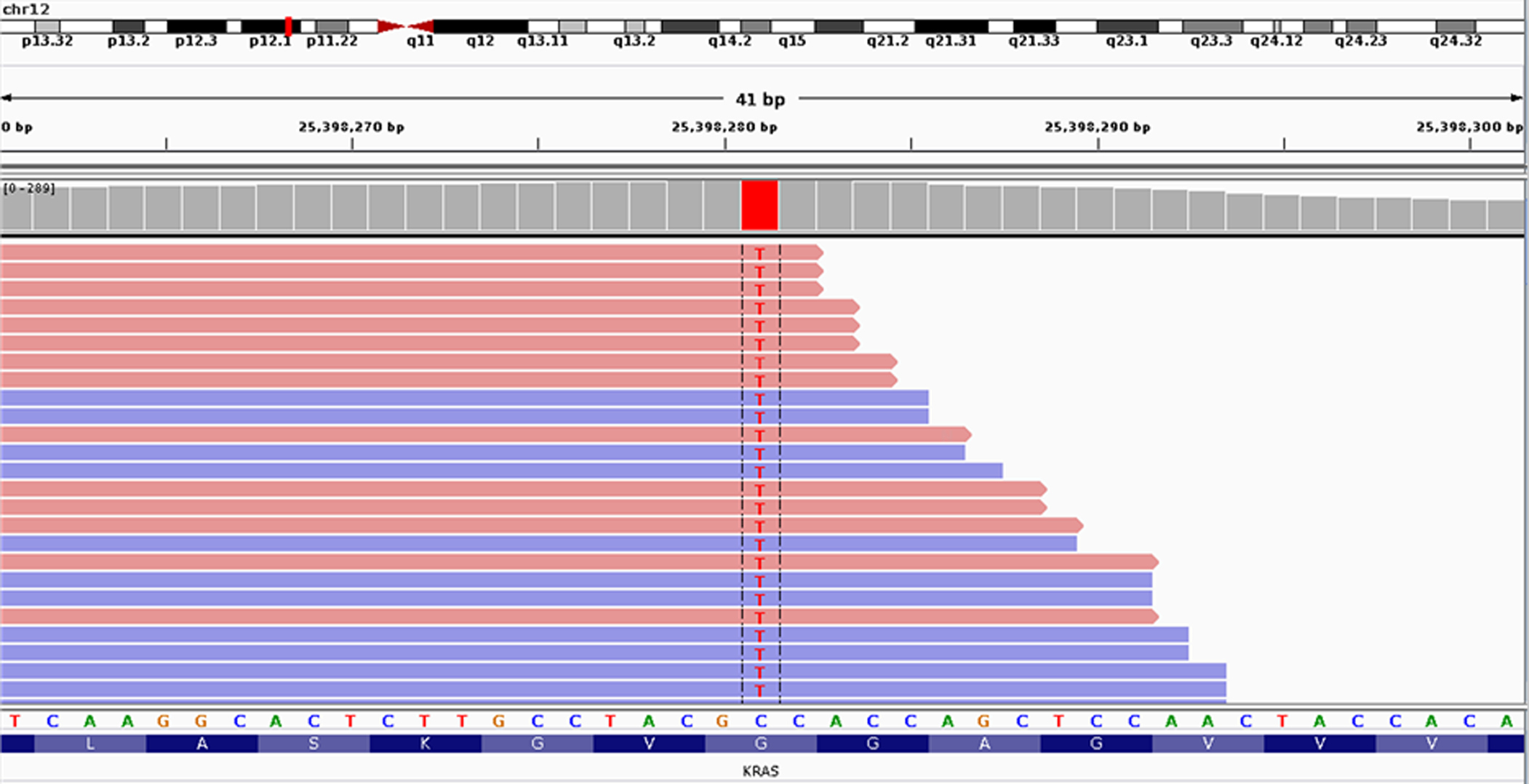 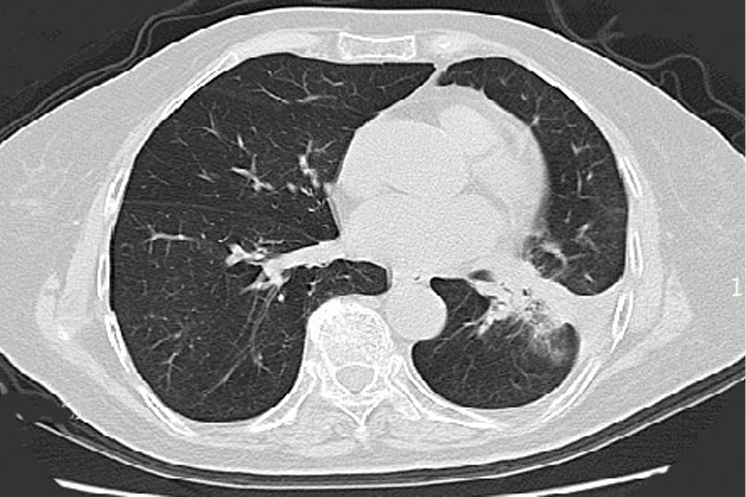 Figure 5 The patient achieved a partial response after crizotinib therapy.

Non-smoking lung cancer patients represent a distinct population with their unique epidemiological, clinicopathological and molecular features (7). ALK rearrangements and mutations in KRAS and EGFR are considered to be the main oncogenic alterations in non-smoking lung cancer (8). In this case, the patient was diagnosed with concurrent KRAS mutation and EML4-ALK translocation.

Patients who harbor ALK gene rearrangement can beneﬁt from treatment with TKIs. Crizotinib, a selective inhibitor of ALK was approved for the treatment of NSCLC patients with ALK gene rearrangement (13). Clinical data demonstrate a significant improvement in objective response rate (ORR) and progression-free survival (PFS) in ALK translocated NSCLC (14).

Kirsten rat sarcoma viral oncogene (KRAS) is a GTP-binding protein, involved in G-protein-coupled receptor signaling (5). KRAS is one of the most frequently mutated oncogenes in NSCLC, which is usually associated with smoking history (15). Although the patients with the wild-type KRAS gene may benefit from the TKI therapy, debate over the prognostic role of KRAS mutation status in NSCLC continues (16). In this case, the patient presented with clinicopathological characteristics of EML4-ALK rearranged NSCLCs, such as young age, non-smoking history, and advanced adenocarcinoma condition. However, a KRAS p.G13D mutation was identified. Indeed, several KRAS genetic mutations including p.G13D concurrent with ALK and ROS1 have been characterized in human malignancies, such as colorectal cancer and lung adenocarcinoma (11,17,18). Previously, KRAS mutations have been reported to indicate primary resistance to crizotinib in ALK-rearranged lung adenocarcinomas (19). Similarly, another study reported that point mutations of the KRAS oncogene may interfere with ROS1 signaling and lead to unresponsiveness to crizotinib in ROS1-targeted therapies in lung cancer (18). Nevertheless, a favorable response to erlotinib was reported in a lung adenocarcinoma with both EGFR exon 19 deletion and KRAS G13D mutations (20). Moreover, excellent response to crizotinib has been previously reported in a lung adenocarcinoma with concurrent KRAS mutation and ALK rearrangement (11). Based on the patient’s results, we believe that the presence of KRAS mutation does not affect the receipt of crizotinib in ALK fusion patients. Thus, the precise role and mechanisms of KRAS mutation in ALK- or ROS1-translocated NSCLC remains indecisive and needs further investigation.

In summary, the present case indicated that the patient with concurrent EML4-ALK rearrangement and KRAS mutation experienced an excellent disease control with crizotinib for a PFS of 11 months. Although oncogenic drivers are mutually exclusive in the majority of NSCLC, 2 or more oncogenic events may be present in a minority of cases. Moreover, a further understanding of the pathogenesis of lung cancer with multiple oncogenic drivers will promote the optimal treatment for NSCLC.