Lung cancer, one of the most common malignant tumors, has the highest mortality rate among all human cancers (1,2). The incidence rate of lung cancer is also the highest among all human tumors, with around 1.8 million new cases each year (2), most of which are advanced non-small cell lung cancer (NSCLC) (3,4). Classical chemotherapy exerts its antitumor activity by causing damage and inducing apoptosis in rapidly dividing cells and has been a cornerstone of standard cancer treatment for several decades (5). The rationale for classical chemotherapy is to kill the malignant cells and reduce the tumor size (6). Because the success rate of lung cancer treatment has reached a plateau in recent years, new treatment strategies are urgently required to improve clinical efficacy in patients with advanced NSCLC (7).

Cyclooxygenase-2 (COX-2) inhibitors, an enzyme expressed in the inflammatory and neoplastic tissues, has been closely associated with tumor development including apoptosis, angiogenesis, and tumor invasiveness (8). In particular, COX-2 is involved in the conversion of arachidonic acid into prostaglandin and other bioactive lipids (1). Apart from being associated with inflammation, COX-2 induces large amounts of prostaglandin E2 in the tumor tissues (9-12) and is a key factor in tumorigenesis (11,13-18). COX-2 inhibitors, such as celecoxib, rofecoxib, and apricoxib have been used in the management of advanced NSCLC.

Until September 10, 2018, we searched the literature to identify the published meta-analyses and systematic reviews in PubMed, Embase, and the Cochrane Database of Systematic Reviews. The following search terms were used: “non-small cell lung cancer”, “non-small cell lung carcinoma”, “cyclooxygenase-2 inhibitors”, “COX-2 inhibitors”, and “chemotherapy”. The study types were limited to meta-analyses and systematic reviews. The abstracts that were found from these searches were reviewed by two reviewers (ZM Liao and Y Fu). We obtained the full texts of the studies that met our inclusion criteria. The cited studies from the selected meta-analyses were also reviewed to ensure that no studies were missed.

The inclusion criteria were (I) meta-analyses that assessed the efficacy and safety of chemotherapy and COX-2 for NSCLC treatment, (II) the most complete or the most recent meta-analysis that included the same results from the same patients by the same author, and (III) meta-analyses written in Chinese or English language. The exclusion criteria were (I) studies that did not involve the use of chemotherapy, (II) studies without clinical outcomes of interest, and (III) systematic reviews that did not perform meta-analysis or synthesize data.

The Quality of Reporting of Meta-analyses (QUOROM) system (25) is a tool for assessing the methodological quality of meta-analyses. The 18-category QUOROM checklist generates an overall score according to the quality of the reporting and methodology of a meta-analysis. One point was awarded for each of the 18 possible categories if the study met over half of the standards for that category. The Oxman-Guyatt score was also used to grade the methodology of each meta-analysis (26). Finally, studies were recorded in some case if the study recorded bases within the reviewed literature. Any disagreement regarding the methodological quality was resolved by discussion with an author (W Zheng).

The Jadad decision algorithm (28) is a common tool for investigating the origins of inconsistencies among systematic reviews, such as those concerning quality evaluation, extraction, data synthesis, and statistical analysis. This algorithm has been widely employed to offer critical recommendations about treatment among meta-analyses with conflicting conclusions. The algorithm was independently performed by three authors, who reached a consensus on the optimal evidence from the included meta-analyses.

Our initial article search identified 245 studies, of which four (8,19-21) were included based on our study selection algorithm (Figure 1). Four studies were published from 2014 (8) to 2018 (19); All the studies reported conflicts of interest and declared that they had no competing interests. The number of primary studies included in each meta-analysis ranged from four (8) to nine (19) (Table 1), and the studies that met our criteria reported on sample sizes of 922 (8) to 1,794 patients (19). Our study selection algorithm is shown in the Preferred Reporting Items for Systematic Reviews and Meta-Analyses (PRISMA) (29) diagram (Figure 1). 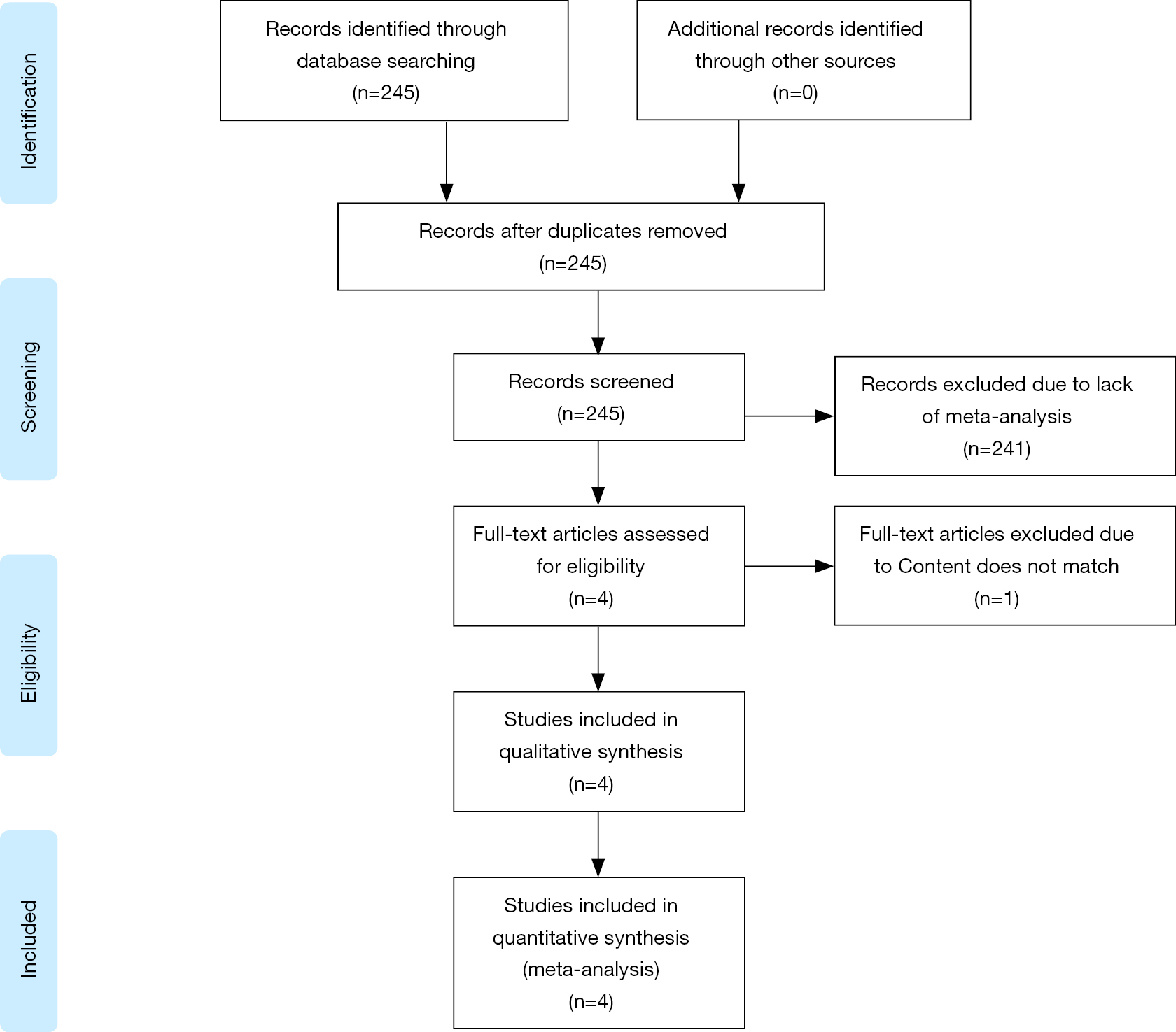 Each included meta-analysis was searched in the medical databases PubMed and Embase. Marked differences were found among the other databases (Table 2), with four studies (8,19-21) using the Cochrane Library database and only one study (20) using both the China National Knowledge Infrastructure (CNKI) and the China Biomedicine Database on Disc (CBMdisc). Only the study by Dai et al. (19) was registered in ClinicalTrials.gov. 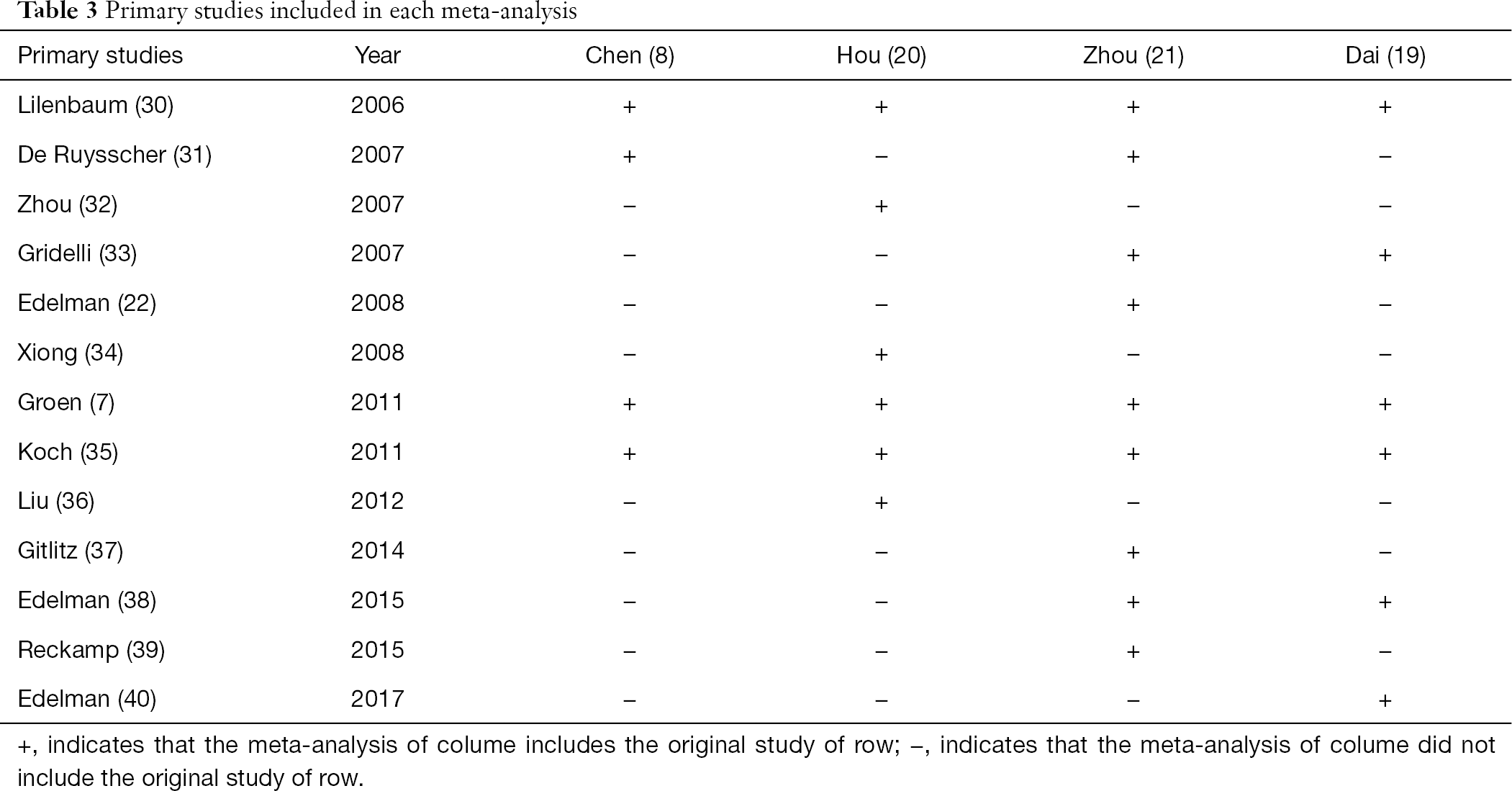 Some discrepancies were found among the outcomes evaluated by each meta-analysis (Table 4). The different outcomes, namely, ORR, PFS, OS, 1-year SR, and toxicities (Table 5) were reported in all the four studies (8,19-21), however, only Zhou et al. (21) and Chen et al. (8) reported QOL (Table 4). All the three studies (8,20,21) reported survival indices, such as OS and PFS, but Hou et al. (20) did not perform any statistical analysis. 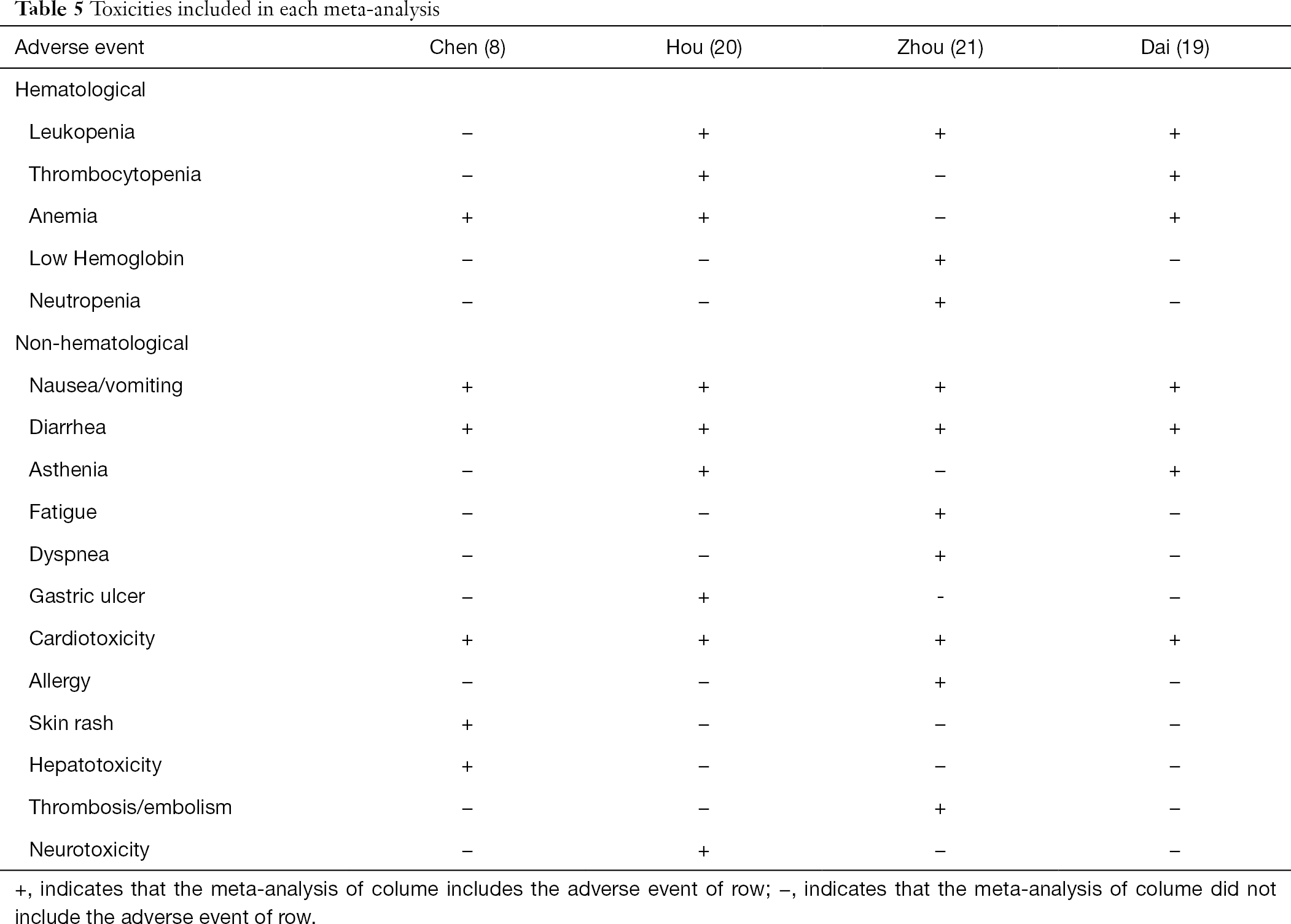 To determine which meta-analysis provided the optimal current evidence, the two lead authors independently used the Jadad decision algorithm (28) and concluded that two (8,19) of the four included studies indicated the highest level of evidence. Dai’s study (19) showed that chemotherapy plus COX-2 inhibitors increased the ORR in advanced NSCLC, especially when combined with the standard treatment. Figure 2, a flow diagram of the Jadad decision algorithm, shows all outcomes of the included meta-analyses. 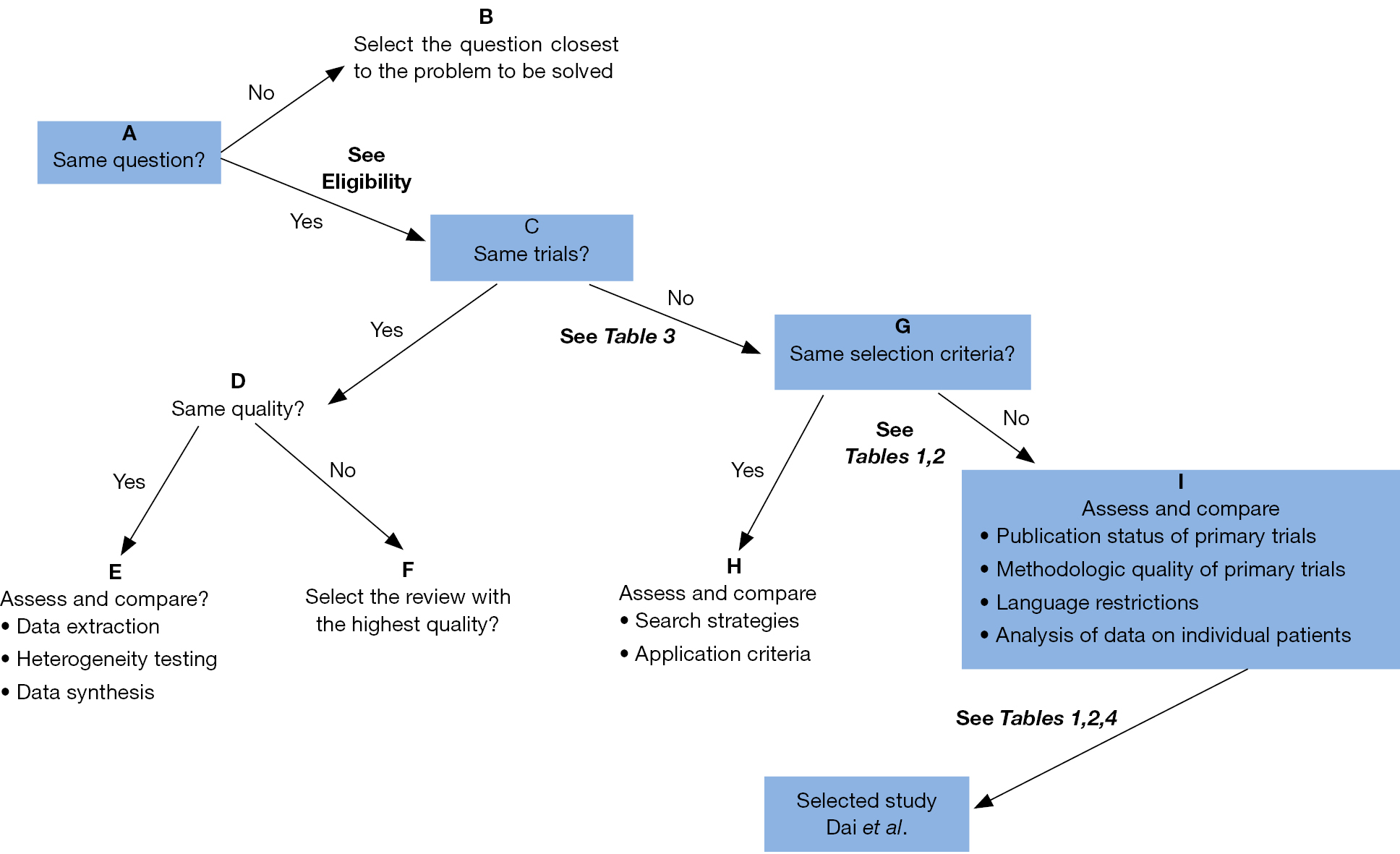 The major purpose of this overlapping meta-analysis was to establish the safety and efficacy of the use of COX-2 inhibitors with chemotherapy. Previous studies have shown that these treatments can increase the ORR and survival indices in NSCLC. However, their use has also been associated with the increased risk of toxicity and shortened OS and PFS. Several studies have investigated this conflict (7,30,31,35), and therefore, this overlapping meta-analysis was conducted to explore the reason for the discordance among the previous meta-analyses and to identify which studies offered the optimal evidence on the treatment of advanced NSCLC. The hypothesis that chemotherapy plus celecoxib could provide more benefits than chemotherapy alone in advanced NSCLC was confirmed.

This review used several tools (QUOROM and Oxman-Guyatt scores, and the Jadad algorithm) to assess the quality of the four meta-analyses (8,19-21). Three (8,19,21) included meta-analyses had Oxman-Guyatt scores of 5 with QUOROM scores of at least 13 (20). One study with no major flaws in its methodology (26) had an Oxman-Guyatt score of 4 (20). Our conclusions are mainly dependent on Dai’s meta-analysis (19), which has the highest QUOROM and Oxman-Guyatt quality assessments among the four included meta-analyses (8,19-21), and provides practical recommendations. Dai et al. (19) found that COX-2 inhibitors showed no impact on survival indices (1-year SR) but improved the ORR in advanced NSCLC when used as the first-line chemotherapy. In contrast, patients with advanced NSCLC who received COX-2 inhibitors as a second-line treatment showed no significant difference.

This study of overlapping meta-analyses also found that celecoxib is likely to lead to a higher incidence rate of hematological toxicities, whereas rofecoxib may not avoid the risk of cardiovascular events. However, Dai et al. (19) analyzed the clinical benefits and indicated that the addition of COX-2 inhibitors to chemotherapy regimens resulted in no significant difference. The study by Chen et al. (8), which had a QUOROM score of 16 and an Oxman-Guyatt score of 5, found a modest activity for celecoxib against advanced cancers and indicated that a better outcome was obtained if celecoxib was combined early with chemotherapy. The study by Dai et al. (19), which also had a QUOROM score of 16 and an Oxman-Guyatt score of 5, found that the type of COX-2 inhibitor used was a deciding factor; and a further subgroup analysis indicated that rofecoxib combined with chemotherapy as the first-line treatment markedly improved ORR in NSCLC patients. Because celecoxib may increase the risk of cardiovascular events in patients with a medical history of heart disease (8,19), clinicians and decision-makers must consider the cardiovascular toxicities caused by COX-2 inhibitors. In contrast to the study by Dai et al. (19), Chen et al. (8) concluded that QOL outcomes were not significantly different between the celecoxib and the control groups. These two studies (8,19) were also identified by the Jadad algorithm as having the highest levels of evidence. The remaining studies (20,21) presented conclusions that were similar to those of the two higher-quality assessments.

The advantage of this overlapping meta-analysis lies in the use of a series of validated independent quality assessment tools to fully assess each study. Additionally, this overlapping meta-analysis is a comprehensive study on researches evaluating the clinical benefits of COX-2 inhibitors combined with chemotherapy in advanced NSCLC. However, there are several limitations in the number of included meta-analyses, including reporting bias (41) and limitations in the trial type. This study was limited to randomized controlled trials and included published and unpublished data, but all our included meta-analyses were from China. Sufficient individual data, such as age, gender, nationality, dosage of COX-2 inhibitors, and follow-up periods, were not reported. Only two meta-analyses (8,19) described most of these detailed data. Furthermore, the primary studies lacked descriptions of treatment allocation concealment (42) and blinding methods (41) and lacked a good number of trials. At the same time, we found that the included meta-analyses did not compare chemotherapy plus COX-2 inhibitors to chemotherapy alone solely for the treatment of NSCLC. For example, Chen et al. (8) added other cancer types, including colorectal, prostate, breast, and ovarian cancers, and other treatment patterns, including hormonal therapy and radiotherapy.

Based on the best available evidence, the use of chemotherapy combined with COX-2 inhibitors (most often celecoxib) had a more significant impact on advanced NSCLC than chemotherapy alone. However, because of the associated adverse reactions of the drugs, we must carefully consider the appropriateness of administering these drugs in patients with a medical history of heart disease. Chemotherapy plus celecoxib had better efficacy as a first-line treatment than as a second-line treatment.

Funding: This study was supported by the Shiyan Foundation for Development of science and Technology (No. 16Y09).