Prostate cancer demonstrated a higher degree of heritability than other common cancers such as ovarian and breast cancer (1). Molecular profiles are increasingly being untilized for subtyping cancers and guiding treatment selection. Several studies have demonstrated the possibility in diversifying prostate cancer. One of the recent recognition is the germline and somatic mutations. Deleterious mutation in BRCA1 and BRCA2 which are associated with breast, ovarian and pancreatic cancer, have also shown to increase the risk of prostate cancer and some are even associated with aggressive form of the disease (2-4). In addition, early study from The Cancer Genome Atlas (TCGA) found that other genes, FANCD2, CKD12, and ATM classified under DNA repaired genes were also shown a higher prevalence in primary prostat cancer. It is estimated that 7–12% of men with metastatic prostate cancer involved inherited germline mutation in DNA repair genes (5).

The prevalence of somatic and germline mutations in DNA repair genes is becoming better understood. However, disease prognosis and treatment response associated with these mutations are not yet elucidated. Therapeutic management of metastatic castration-resistant prostate cancer (mCRPC) is currently based on new hormonal therapies (abiraterone, enzalutamide) and taxane-type chemotherapy (docetaxel or cabazitaxel). Early reports shown that patients carried genes associated with DNA-repair demonstrated a good response to poly-ADP ribose polymerase (PARP) inhibitors and platinum-based chemotherapy (6,7). Although results are still emerging and need validation, current evidence has suggested a potential subgroup associated with DNA repair genes mutation in prostate cancer may benefit from other treatment strategies.

Normal intracellular metabolism and environmental exposure constantly induce DNA reactivation and damage of the genome of cells in the human body. Various DNA repair mechanisms have been identified which help the cells repairing the many accidental lesions that occur continually in DNA and to protect genome integrity. Inherited and acquired deficiencies in these DNA repair mechanisms can modify cancer susceptibility as well as therapy response. The carcinogenesis of prostate cancer is suggested an accumulation of molecular changes of AR transcription activity, error prone DNA repair, oncogenic replication and changes in chromatin architecture. To further understand the role of DNA repair genes associated with other genomic alteration and signaling pathway, we applied an integrative analysis of multi-omics to TCGA prostate cancer dataset which contains 498 patients. Furthermore, we reveal the signature of “chromosome condensation”, “BRCA1”, and “mismatch repair” were associated with disease-free survival. Through the concurrent analysis of gene expression profiles, reverse phase protein lysate microarray (RPPA) data, and copy number alterations, we found the three signatures are associated with cell cycle and DNA repair pathway and also lots events of copy number alterations. This finding will support future understanding of how DNA repair processes, and DNA double-strand break repair in particular, are regulated during the cell cycle associated with the disease progression of prostate cancer.

Signature score of a gene set

To evaluate the activities of the gene sets examined in the study, the scoring method of Tian et al. (8) was used. Suppose there are N genes in a given gene set. Let x l = {x1,l, …, xN,l}, where xj,l is the log2-transformed expression level of gene j in the expression profile of sample l. For a given gene set, the signature score of a sample is defined as

where zj,l=(xj,l-μj)/σj, and μj and σj are the mean and standard deviation of the expression level of gene j in all expression profiles.

We studied the prognostic roles of biological functions (represented by gene signatures) in prostate cancer. We re-analyzed expression profiles of 498 prostate tumors of TCGA and calculated per-sample gene signature scores of curated gene sets. Signature scores of the collected 10,236 gene sets were analyzed by a Cox hazard regression. A total of 285 gene sets were significantly associated with relapse-free survival (RFS). Heatmap of signature scores of the 285 gene sets is shown in Figure 1A. Among these gene sets, 6 gene sets were associated with mitosis and 24 were associated with cell cycle. “GO CHROMOSOME CONDENSATION” was significantly associated with RFS (P=1.5×10−11). Chromosome condensation is an essential process during mitosis phase of cell cycle and thus may mark tumor progression and aggressiveness. A sub gene set “GO MITOTIC CHROMOSOME CONDENSATION”, which contains 14 out of its 31 member genes, was ranked as the 6th significant gene set (P=2.0×10−6). The results indicated that cell cycle is highly associated with cancer progression in prostate cancer. Chromosome condensation in the mitotic phase is the most prognostic gene set. 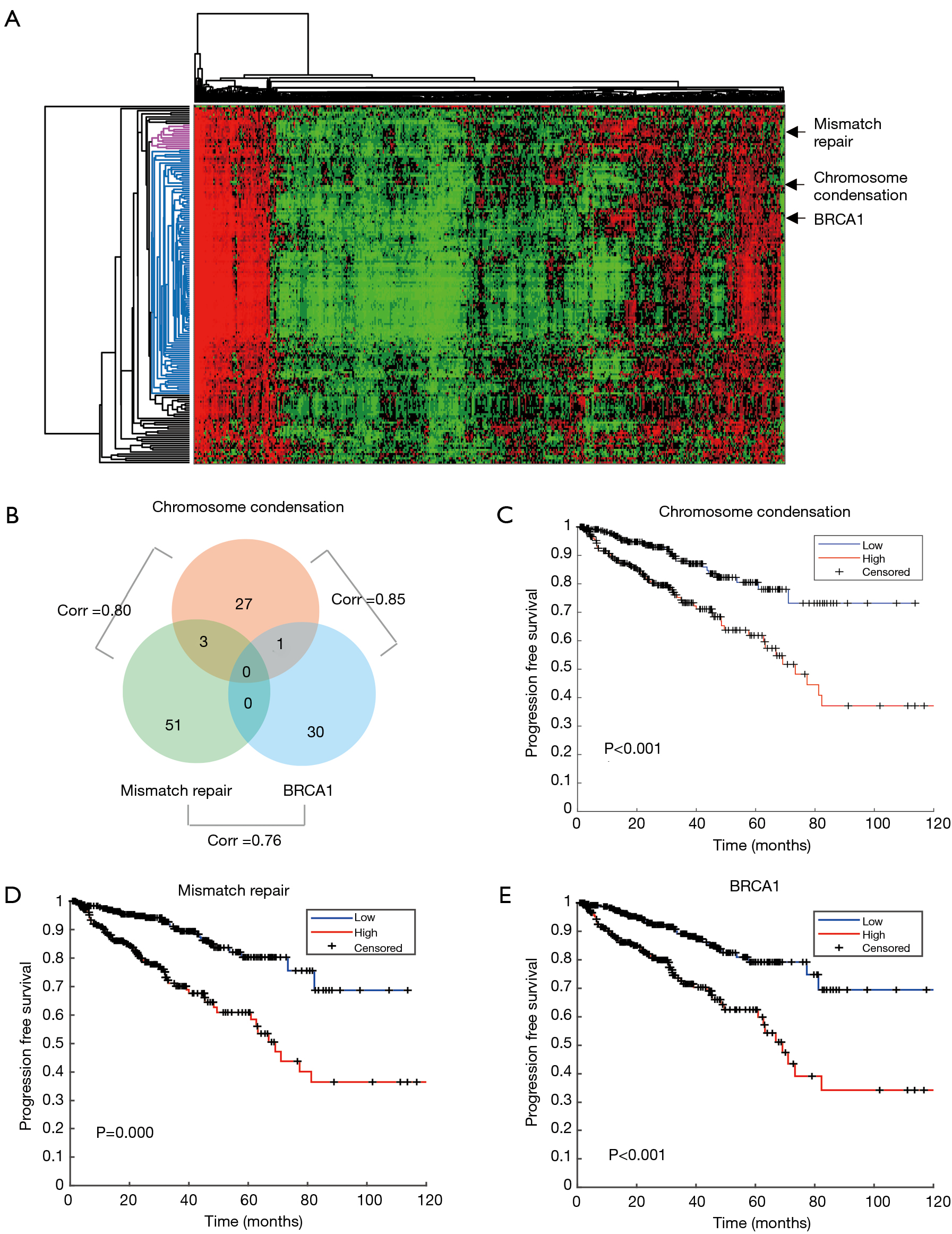 Figure 1 Associations among chromosome condensation, BRCA1, mismatch repair signature scores and relapse-free survival in prostate cancer patients. (A) The heatmap of signature scores of the 285 prognostic gene sets. Three of them were selected to represent the function of chromosome condensation, BRCA1, mismatch repair; (B) Pearson correlations show that the three gene-signatures were mutually interdependent in prostate cancer. All coefficients were >0.76. The number of overlapping genes between any two gene set are less than 3; (C,D,E) the Kaplan-Meier analysis shows the three gene sets are prognostic.

There were 30, 55, and 28 member genes of the “chromosome condensation”, “mismatch repair” and “BRCA1 mutation” gene sets, respectively. Cox regression showed that 61% (19/31), 69% (38/55), and 32% (10/31) of them had significant adverse effects in RFS [hazard ratio (HR) >0 and P<0.05; Figure 2]. Of note, NCAPD3 of the “chromosome condensation” signature was the only with significant protective hazard ratio (HR=0.76; Figure 2). In the “chromosome condensation” signature, NUSAP1, a coding gene of a nucleolar-spindle-associated protein, had the highest HR (HR=1.50) and TOP2A, a well-studied oncogene that encodes a DNA topoisomerase, was the second (HR=1.47). The two genes have been reported with roles in chromosome condensation and mitosis (10,11). The top 2 genes of the “BRCA1 mutation” signature were CDC20 and RAD54L. CDC20 is a protein of the anaphase-promoting complex which could inhibit BRCA1 facilitated homologous recombination (12). RAD54L is involved in the BRCA1 mediated homologous recombination repair (13). In the “mismatch repair” gene set, LIG1 (1st ranked) is DNA Ligase 1 that functions in DNA replication and recombination. POLD1 (DNA polymerase delta 1) also plays a critical role in DNA replication and repair (14). Overall, analysis of member genes brought biologically meaningful results that supported our findings at the gene signature level. 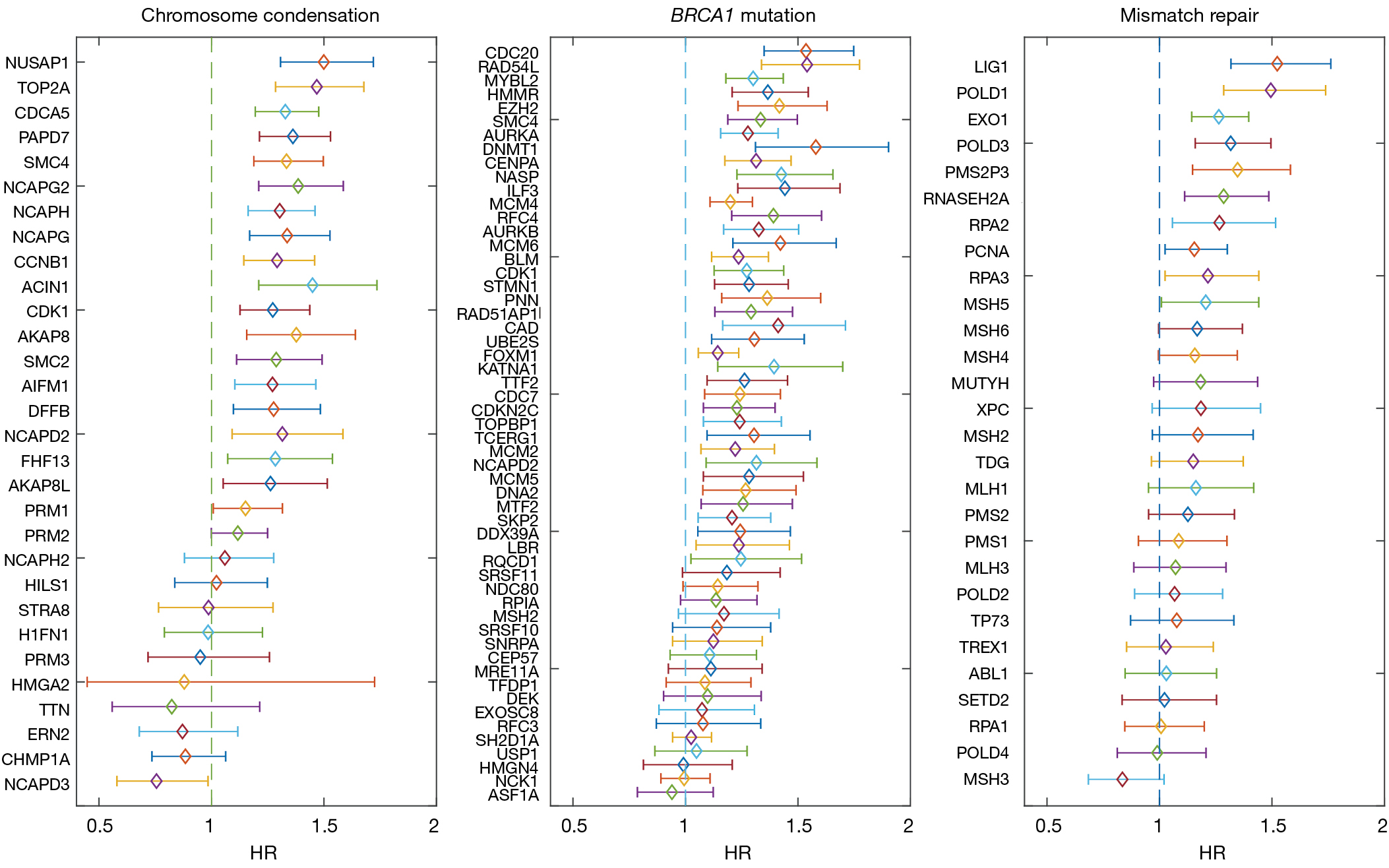 Proteomics validation of the activities of mitotic and DNA repair pathways

At both the gene and gene set levels, our data suggested that DNA repair and the BRCA1 pathway are prognostic and correlated with mitosis. We used the RPPA data of TCPA (9) to confirm such findings in the protein level. We calculated correlation coefficients between a signature score and proteomic activities of its members. Proteins with high correlation coefficients are showed in Table 1. The correlation coefficients of Cyclin B1 are 0.675 (ranked 1st), 0.651 (ranked 2nd), 0.495 (ranked 1st) to the three signatures, respectively. Cyclin B1 has been reported as a regulatory protein involved in mitosis. Chek2, a serine-threonine kinase involved in DNA repair, was correlated with both “chromosome condensation” and “BRCA1 mutation” signatures. Our data also showed Brca2 was negatively correlated to “mismatch repair” signature (coefficient =−0.317). The results again confirmed the association of BCRA1 and DNA repair pathways with mitosis.

Copy number alterations are associated with the signature scores 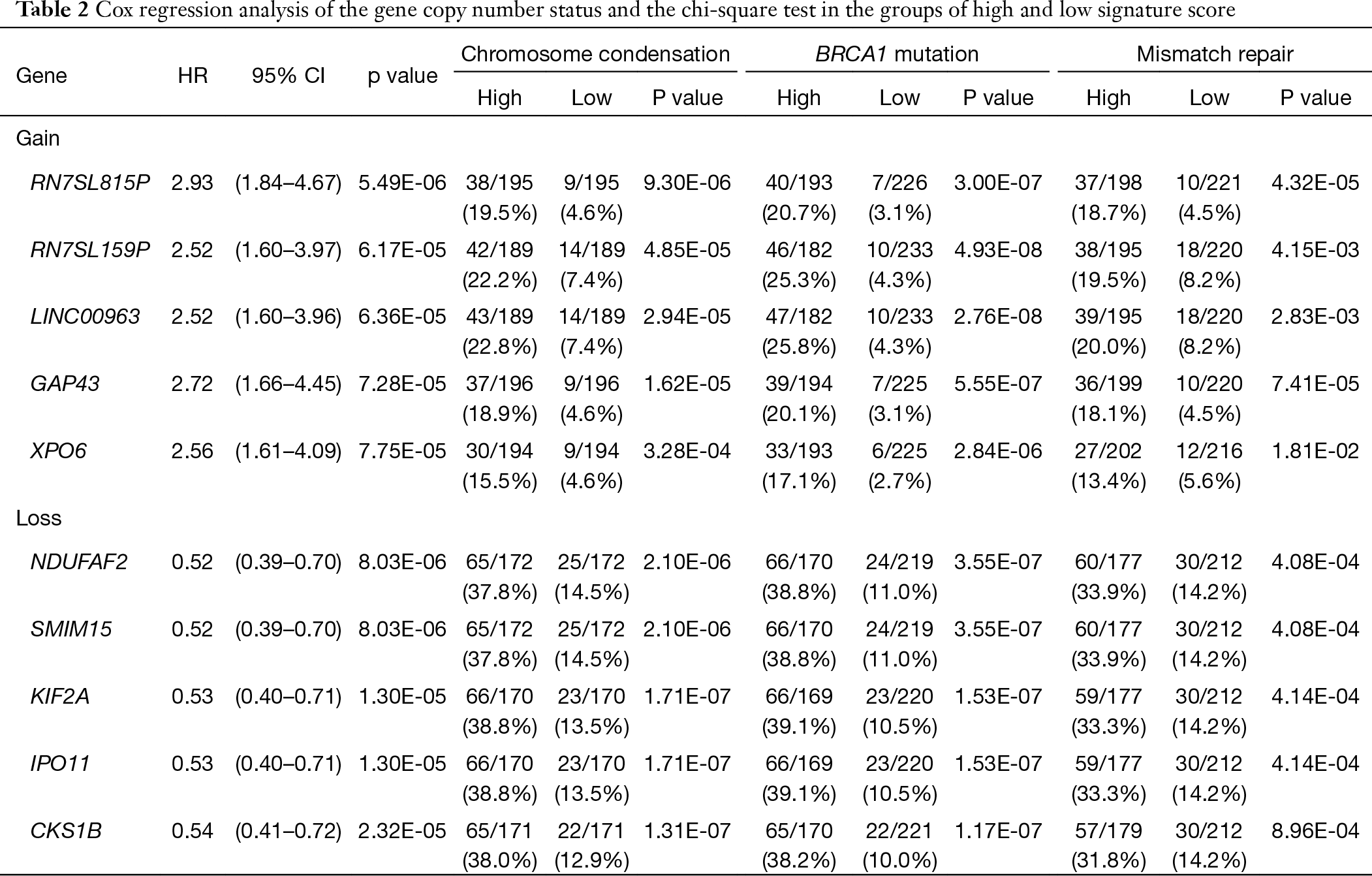 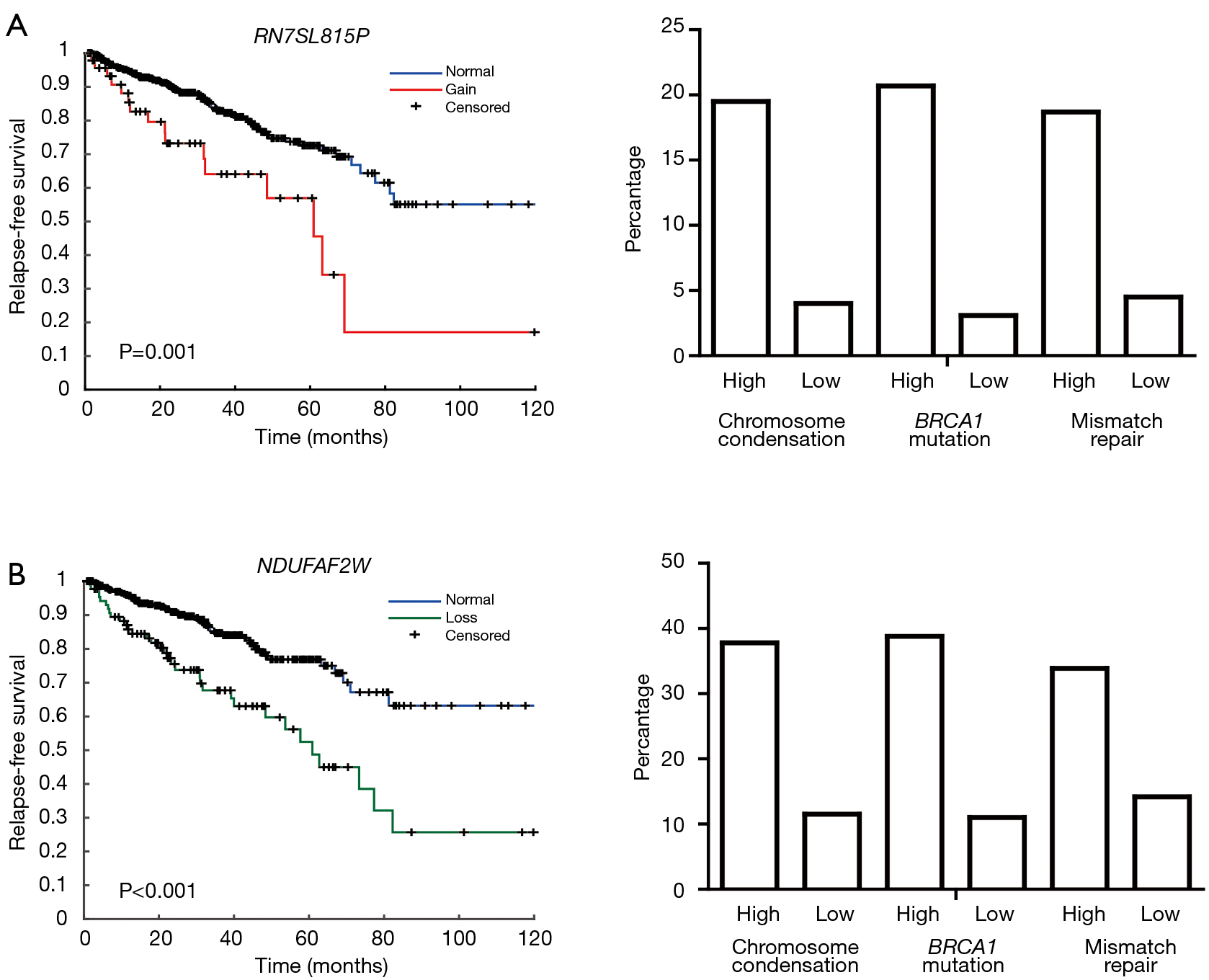 The usage of PARP inhibitors to treat tumors harboring DNA repair defects, especially with homologous recombination deficiency (HRD), is one of the earliest successes of precision oncology (15,16). In prostate cancer, germline and/or somatic mutations of DNA repair genes are closely associated with patients’ response to not only PARP inhibitor (6,17), but also chemotherapy (18,19) and androgen deprivation therapies (20,21). The emerging technology of liquid biopsies, such as circulating tumor cells (CTCs) and circulating tumor DNA (ctDNA), enables a least-invasive assay for these mutations and promises wide clinical applications (22). However, the role of genomic mechanisms other than mutations of the DNA repair genes remains an uncharted territory. In fact, integrative analysis of genomic and proteomic profiles of prostate tumors is realized using next-generation sequencing and RPPA. For instance, integrations of DNA- and RNA-Seq revealed novel classification beyond Gleason score (23) and clinically actionable alterations (24) of prostate cancer. However, such analysis has not been focused on DNA repair genes that can bring biological insights to the observed clinical significance and reveal novel experiment and therapeutic targets. Here, we re-explored the multi-omics profiles of TCGA and carried out a comprehensive analysis of gene expression, functional proteomics, and CNAs of DNA repair genes. Our analysis reached several major findings. First, we conducted a gene set analysis of expression profiles of DNA repair genes. Such analyses have been shown to achieve higher interpretability and tolerance to data noise than investigations at the single-gene level (25-27). As a result, we demonstrated that activities of DNA repair-related functions, including chromosome condensation, mismatch repair, and signaling of BRCA1 mutation, were predictive of progression-free survival of prostate cancer. Our data are in line with previous studies showing that activations of a cell cycle marker and a cell proliferation signature were predictive of adverse survival of prostate cancer (28,29). Second, we demonstrated a concordant prognostic value in protein activities of these genes. Such concordance indicates a meaningful effect of expressional changes in DNA repair genes to really perturb protein functions and affect survival outcomes. Our data underlined many proteins for further investigations. For instance, CDC20 was the top survival predictor among BRCA1 mutation-regulated genes. It is a regulatory protein functioning at several points in the cell division cycle. High expression of CDC20 is associated with high Gleason score, biochemical recurrence, tumor cell growth, and chemoresistance of prostate cancer (30,31). Our data confirmed the unfavorable role of its protein activity. Among proteins associated with chromosome condensation, several non-SMC condensin complexes (NCAPD2, NCAPD3, NCAPH, NCAPH2, NCAPG, and NCAPG2) were associated with adverse survival. These complexes are players in chromosome assembly and segregation, and may be crucial in tumor cell proliferation and tumor progression. Our data warrant further investigations on these genes. At last, CNAs in some DNA repair genes, including two previously unexplored genes NDUFAF2 and RN7SL815P, were indicative of poor survival. NDUFAF2 encodes a mitochondrial protein that is moderately to strongly expressed among cancers according to the Human Protein Atlas (32,33). Our data were the first to demonstrate the prognostic effect of its CNA in prostate cancer. Altogether, the study presents a unique extension from DNA mutations to expressional functions, proteomic activities, and copy numbers of DNA repair genes in prostate cancer. Our findings revealed crucial prognostic markers and candidates for further biological and clinical investigations.

Ethical Statement: The authors are accountable for all aspects of the work in ensuring that questions related to the accuracy or integrity of any part of the work are appropriately investigated and resolved. This study used public available data which do not require ethics approval.