Gastric cancer (GC) is known as the fifth most common malignancy with nearly 952,000 new cases in 2012, mostly occurs in eastern Asia. It is the third leading cause of cancer death worldwide, comprising 8.8% of total cancer deaths (1). The five-year survival rate of GC stage I and IIA is around 81.8–93.6%, meanwhile that of the stage IIIC is 17.9% (2). Except for radical resection, the therapy options for advanced GC are limited. Thus, searching for the sensitive biomarkers to detect GC in early stage and treatment targets for effective individualized therapy is urgent and crucial.

In total, 75% of the human genome is transcribed to RNA, but 90% of RNAs are without protein-coding function, defined as non-coding RNAs (ncRNAs), which were considered as “transcriptional noise” previously (3). ncRNAs consist of small ncRNAs and long non-coding RNAs (lncRNAs), which are transcripts longer than 200 nucleotides with tissue specificity (4). In these decades, lncRNAs were found playing an important role in gene regulations (5-7). In 2011, Salmena et al. put forward the competitive endogenous RNA (ceRNA) hypothesis to describe a complex post-transcriptional regulatory network, with components of lncRNAs, mRNAs, other RNAs (circular RNA and pseudogene) and microRNA (miRNA). The RNA-RNA crosstalk is working with the principle, that lncRNAs and other RNAs compete the target RNA by sponging miRNA, the common miRNA response elements (MREs) (8). Increasing evidences demonstrated that the lncRNAs were involved in tumorigenesis and progression of breast cancer, liver cancer, lung adenocarcinoma, colorectal cancer (CRC), ovarian cancer and other malignancies (9-13)

Recent studies have revealed several lncRNAs that differentially expressed in GC, as well as their corresponding mechanisms. HOTAIR, the noted lncRNA, modulates HER2 via competing with miR-331-3p in GC (11,14,15). Previous studies indicates that lncRNAs such like GAPLINC, FER1L4, H19 and GACAT1 may interactions with the well-known onco-mRNAs, as CD44 mRNA, RB1, c-Myc and p53, via sponging the common MREs in GC (16-18). However, a whole map of GC specific ceRNA regulatory network and underlying interactions, with large-scale samples need further exploration.

In our study, 375 GC samples and 32 normal samples were obtained from The Cancer Genome Atlas (TCGA) Stomach Adenocarcinoma (STAD) datasets to detect the differentially expression of lncRNAs, miRNAs, and mRNAs. Statistics were further improved the reliability and accuracy by matching the RNA-RNA interaction pairs. The lncRNA associated ceRNA network was constructed, and the function and prognostic value of the key lncRNAs were analyzed.

The steps of the statistics analyzing were shown in Figure 1. 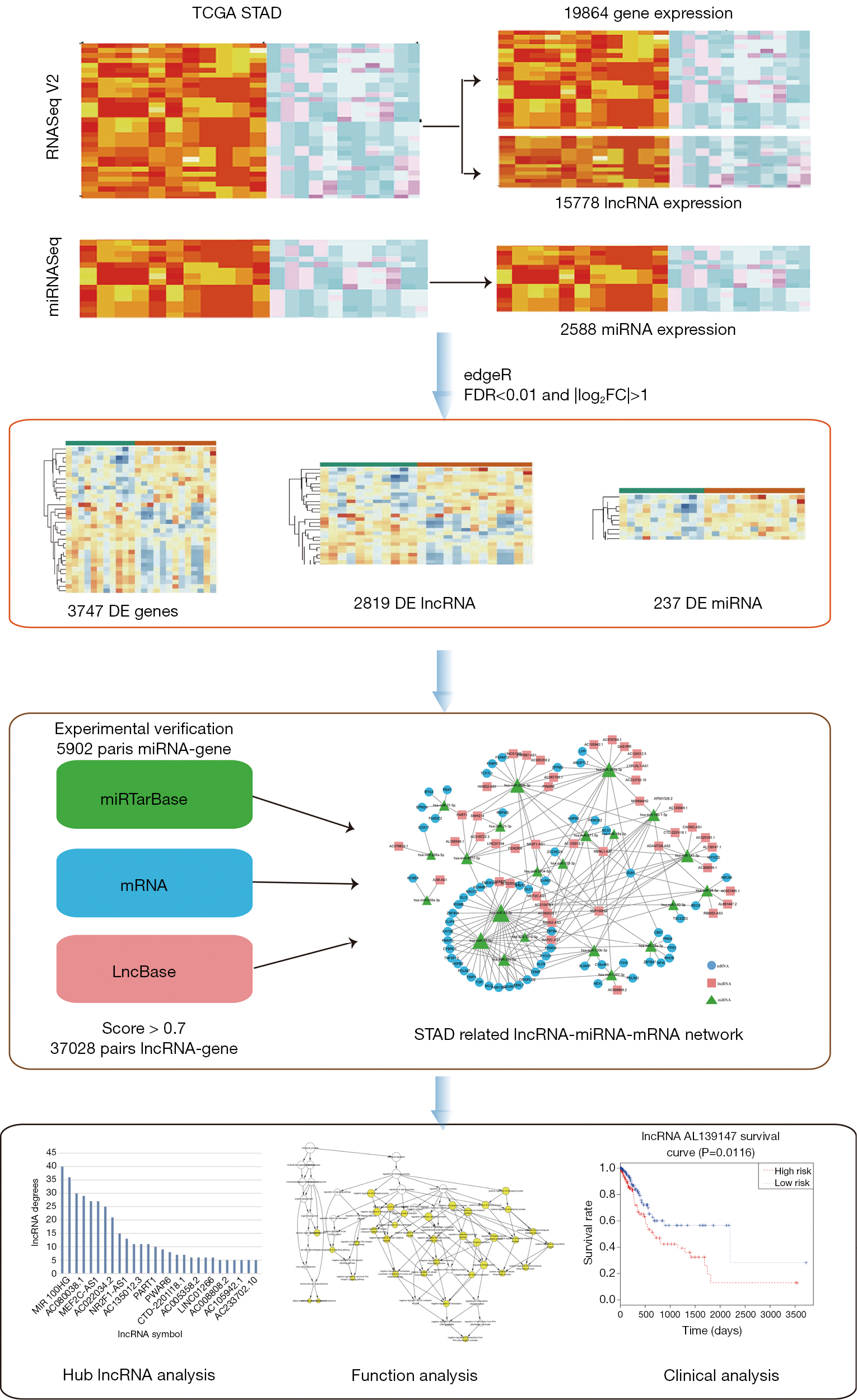 The RNAseq and lncRNAseq of 375 GC samples and 32 normal samples were obtained from TCGA STAD datasets with gtf file of GENCODE version 22. Meanwhile, miRNAseq isoform counts data of 446 GC samples and 45 normal samples were downloaded from the TCGA. To standardize the statistics of the miRNAseq, the 2,588 miRNA mature IDs from miRBase were cross matched with the above data. Then miRNAs were deleted if negative expression in up to 80% samples. We enrolled the 404 samples with date of both the RNAseq and miRNAseq, 365 of which were clinical follow-up. Our research followed the publication guidelines provided by TCGA Network (http://cancergenome.nih.gov/publications/publicationguidelines).

To predict target genes, we downloaded the miRNA-mRNA interactions with low throughput experimentally verified from miTarbase database. We defined the pairs in the LncBase database, which contains crosslinking immunoprecipitation sequencing (CLIP-Seq) verified and computationally predicted miRNA-lncRNA interactions, with scores greater than 0.7 as the potential ones.

The constructed ceRNA network was analyzed the topological properties: the degree, betweenness and closeness of the nodes in the net were calculated with the built-in Network analyzer tool in the Cytoscape.

With collecting the top 5 degree of lncRNAs in ceRNA network, we perform the Gene oncology (GO) function enrichment in BINGO plugin of Cytoscape to detect the potential biological function.

To identify the prognostic lncRNAs, we inspect the differentiate expression RNAs combined with the clinical data from the 365 GC samples in TCGA. Kaplan-Meier survival analysis was applied to analyze the correlation between lncRNA expression and clinical prognosis.

Differentiate expression of lncRNAs, mRNAs and miRNAs in GC

The ceRNA network involved 61 mRNAs, 44 lncRNAs and 22 miRNAs was visualized using Cytoscape software based on the 211 interactions among them (Figure 2). 181 interactions between lncRNAs and mRNAs were presented in Figure 3. 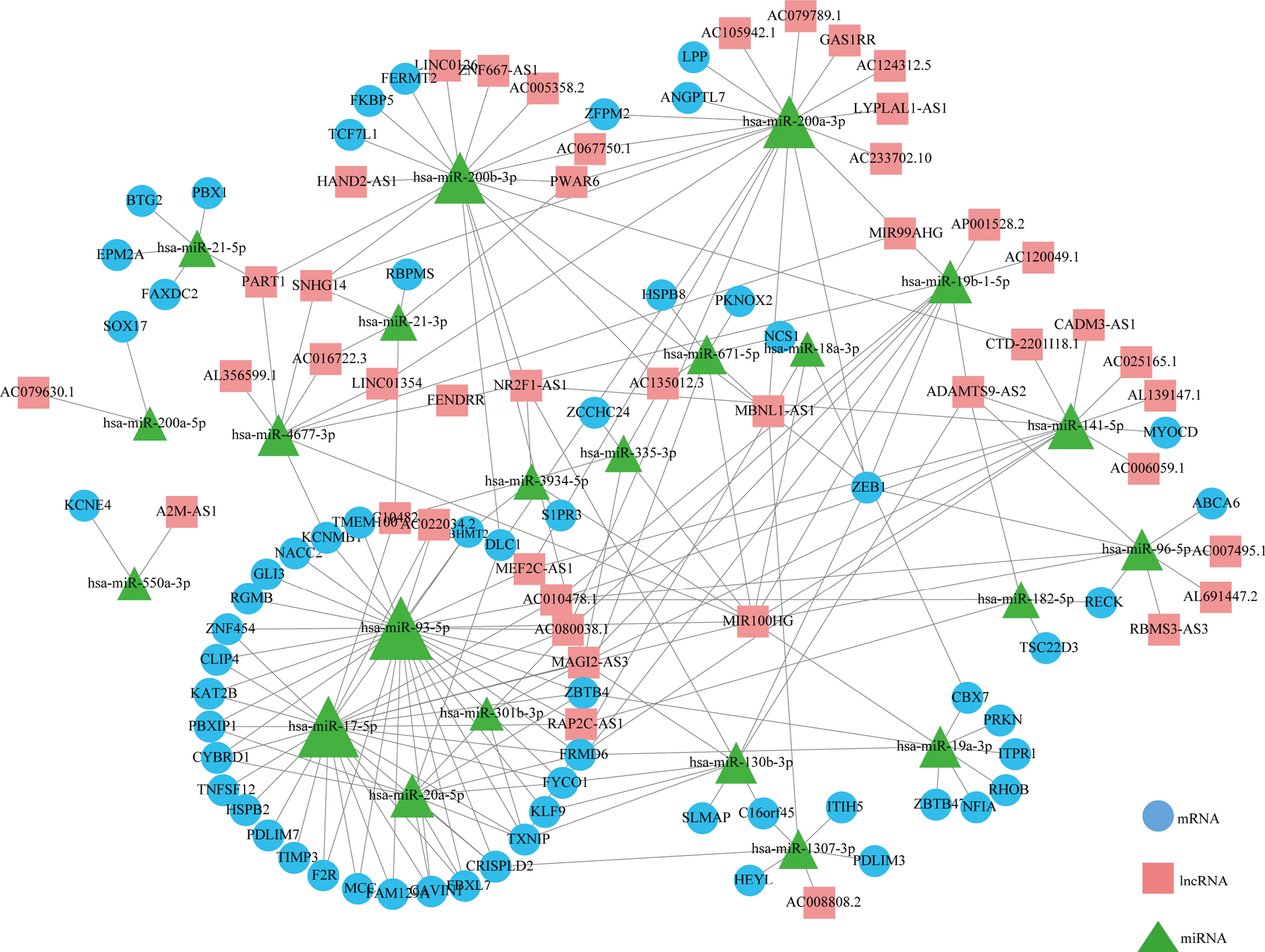 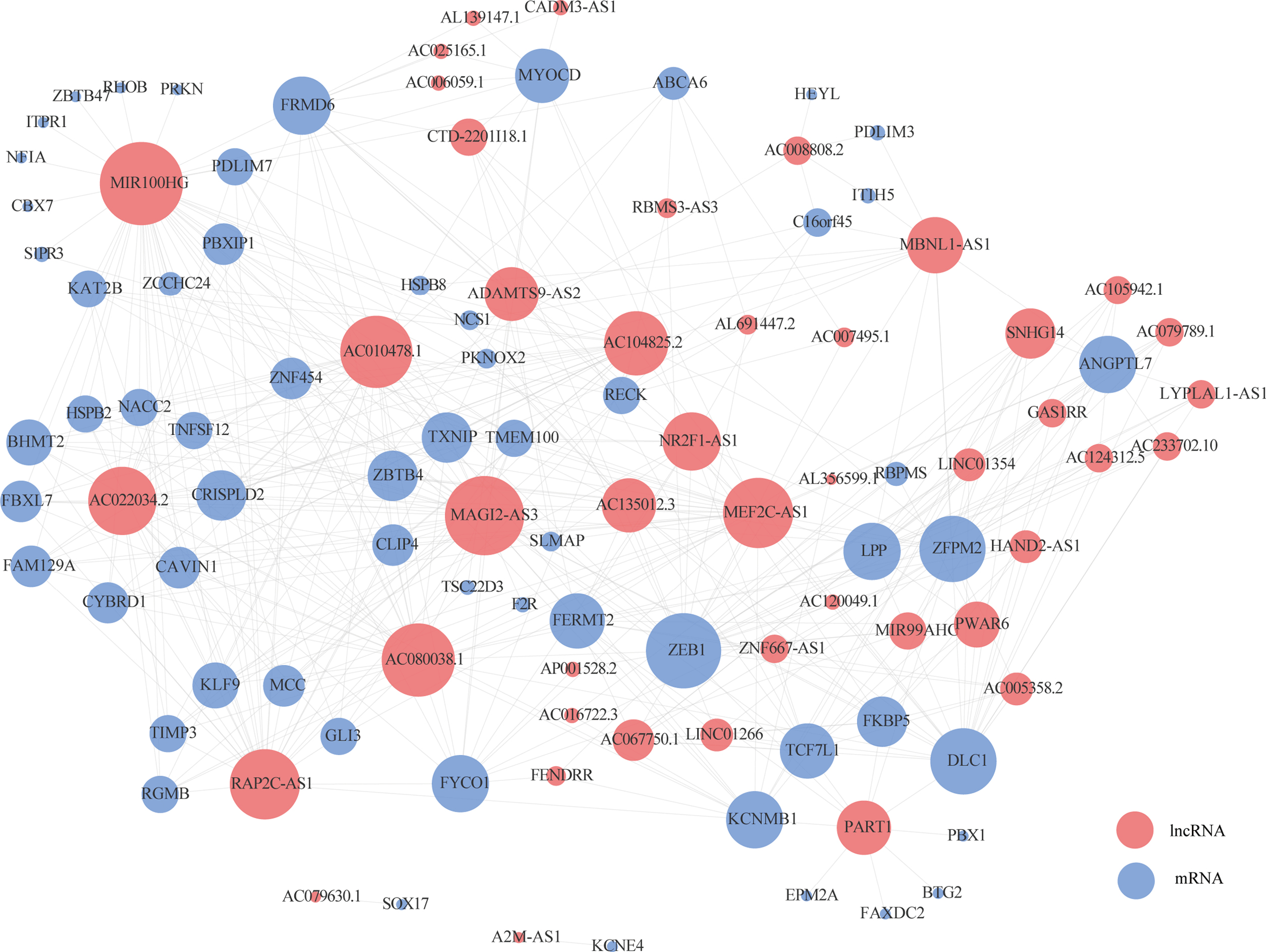 To analyze the topological properties of the ceRNA network, the degree, closeness and betweenness of RNAs were calculated. The degree distribution of the DEmiRNAs was shown in Table 1. The top 5 highest degree in network were hsa-miR-93-5p, hsa-miR-17-5p, hsa-miR-200a-3p, hsa-miR-200b-3p and hsa-miR-141-5p. The degree distribution of the DElncRNAs in lncRNA-mRNA network (Table 2) with their corresponding competitive mRNAs was displayed in Figure 4, and the top 5 highest degree of DElncRNAs were MIR100HWG, MAGI2-AS3, AC080038.1, AC010478.1 and MEF2C-AS1. The competitive mRNAs of lncRNAs shown in Figure 4 are related to tumorigenesis, as ZEB1, BTG2, MYOCD and SRP (19-21). 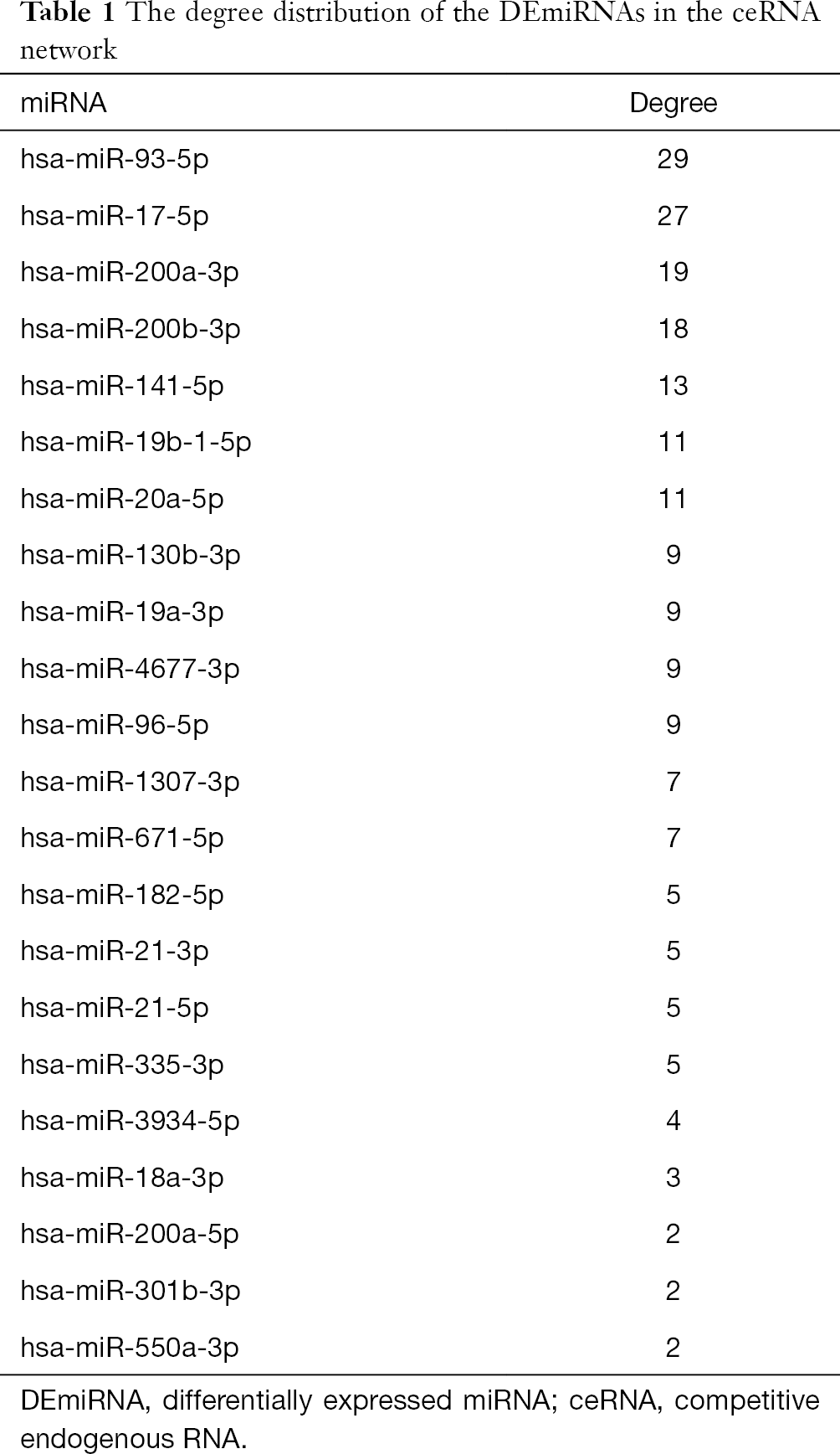 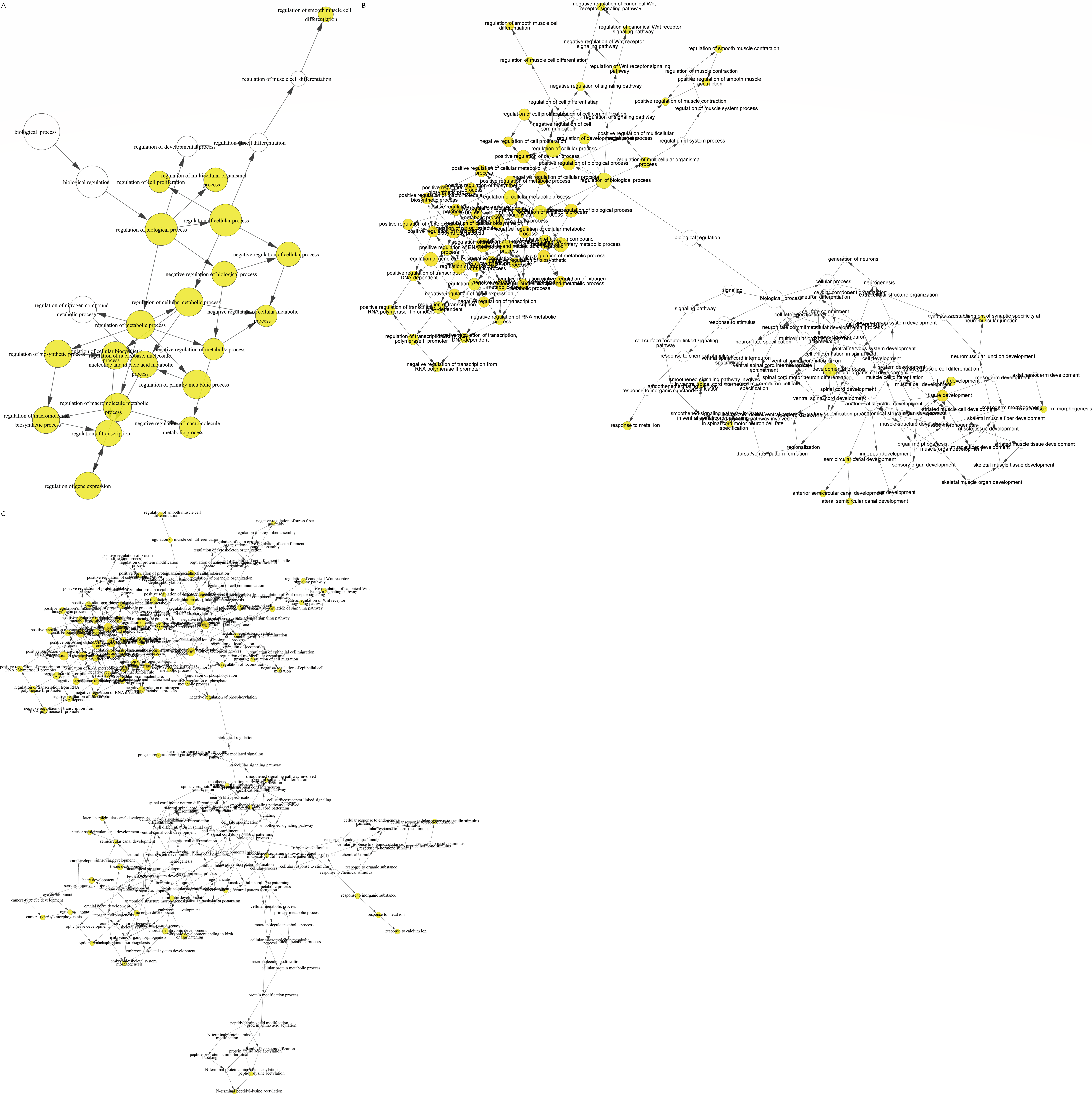 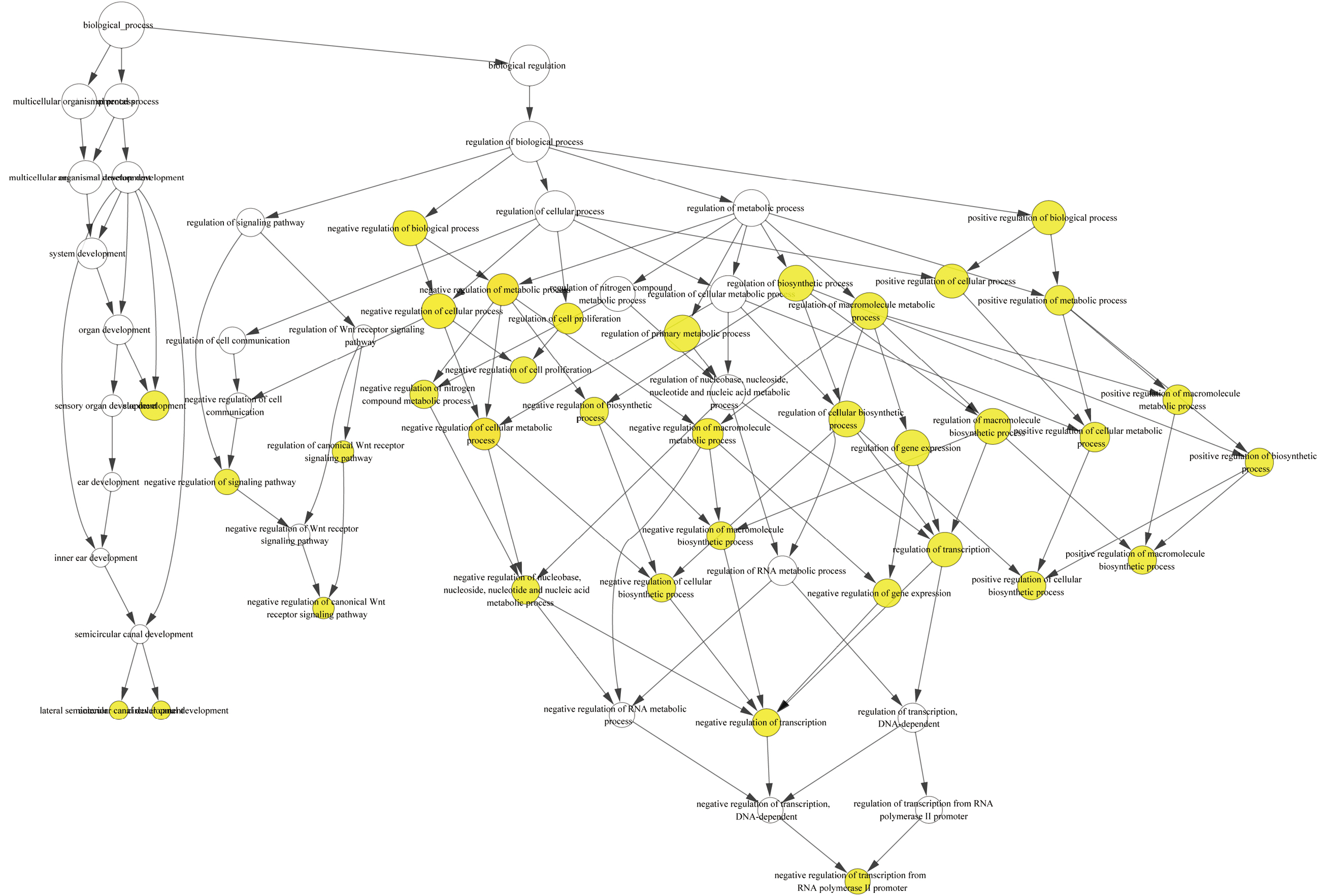 Decades of evidences have demonstrated that the carcinogenesis and progress of cancer is a complex multiple “hits” process with breaking the balance between oncogene and tumor suppressor gene, rather than up or down regulation of one simple gene. The recent ceRNA hypothesis accord with it, which explains the lncRNAs function as the post-transcriptional gene regulator. LncRNAs were involved in the ceRNA network, cross talking with specific RNAs (including mRNAs, circular RNAs and pseudogenes) via sponging the MREs and upregulating the target RNA expression subsequently (7,8). The imbalance of the ceRNA network may lead to various diseases. The ceRNA network has been constructed and further proved in breast cancer, liver cancer, lung adenocarcinoma, CRC, ovarian cancer and other malignancies, helping us discover crucial lncRNAs as the new diagnostic or therapeutic targets (9,10,12,13,22). Several lncRNAs have been detected playing an important role as members in ceRNA network in GC and closely related to prognosis. HOTAIR was a better-characterized lncRNAs in GC as ceRNAs, modulating the depression of HER2, which was related to lymph node metastasis and poor prognosis, via competing with miR-331-3p (11,14). The lncRNA GAPLINC functions as the miRNA 211-3p sponge to regulate CD44 mRNA, which involved in tumor proliferation, angiogenesis and migration (16,17). lncRNAs such as FER1L4, H19, TUSC7 and GACAT1 may interact with the well-known onco-mRNA, like RB1, PTEN, CDKN1A, VEGFA, E2F1, IL-10, HIPK3, PAK7 or P 53 in GC through preliminary studies (18,23).

In present study, 44 lncRNAs were detected to participate in the constructed ceRNA network, with differential expression and target miRNA as well as correlationship of interactions screening to obtain high reliable algorithms. MIR100HG, MAGI2-AS3, AC080038.1, AC010478.1 and MEF2C-AS1 ranked as the most involved lncRNAs in this ceRNA network by topological features. Their target genes were enriched in GO biological process categories as “cellular metabolic process”, “cell proliferation” and “regulation of Wnt receptor signaling pathway”, which were closely related to tumorigenesis and progression. The lncRNA MIR100HG, located in chromosome 11, is a miRNA host gene which encodes miR-100, let-7a-2 and miR-125-b. It was reported holding an intronic coding region, which makes it as a proapoptotic molecule through a caspase-dependent mitochondrial pathway of cell death (24). It is also correlated with the gap junction and TGF-β pathways to participate the tumor development (25). The high expression of MIR100HG is detected in acute megakaryoblastic leukemia as well as cervical cancer, and is associated with the poor prognosis. Analysis of TCGA CRC date found that increase expression of MIR100HG with stage-dependent pattern. Researchers applied MIR100HG as the diagnostic method for cervical cancer, and the ROC curve showed promising discrimination power with areas under the curve of 0.801 (26). Furthermore, Lu et al. revealed that MIR100HG mediate de novo and acquired cetuximab-resistant in CRC cells via Wnt signaling (27). Overexpression of miR-100 and miR-125-b has been observed in GC, but how the expression of MIR100HG changed in GC and the way it involved as the ceRNA, need further research. MAGI2-AS3 is a newly discovered lncRNA, recognized as a tumor suppressor in breast cancer, via regulating Fas/FasL signaling pathway. Breast cancer cells low expressed MAGI2-AS3. And MAGI2-AS3 expression was negative related with histological grade, TNM stage and HER-2 expression (28). lncRNA MEF2C-AS1 is an antisense RNA to MEF2C, which is identified as the potential oncogene in T cell acute lymphoblastic leukemia (29). Study revealed that MEF2C might be the molecular mechanism of chemotherapy resistance in acute myeloid leukemia (30). Luo et al. showed that lncRNA MEF2C-AS1 significantly downregulated in diffuse GC, and the in-vitro assays detected that the knock-down of MEF2C-AS1 promoted aggressive tumor behaviors (31). Another highlight lncRNA, AL139147 is located in chromosome 1 and is suspected with disease as psoriasis, atrioventricular septal defect and peripheral arterial occlusive till now. It regulated the mRNA SGIP1 and DKFZp761D221 variant protein. Although the connection between AL139147 and cancer has not been found yet, the expression of AL139147 in GC samples was significantly higher than that in normal ones through analysis of TCGA database. Meanwhile, our constructed network indicated that it interplayed with other ceRNAs and miRNAs in the GC as a network node, targeting MYOCD and FRMD6, which were contributing to tumor development pathway (32). Furthermore, according to the Kaplan Meier analysis of the clinical statistics of the 365 samples, high expression of AL139147 has a tendency of poor prognosis (P<0.05). Till now, there has been few research on lncRNA AL139147, AC080038.1 as well as AC01047. Evidences suggest that our constructed ceRNA network is highly associated with tumorigenesis and chemotherapy resistance, and the crucial lncRNAs in the network might be promising biomarker and therapeutic target for GC.

To draw a comprehensive of the lncRNA-miRNA-mRNA crosstalk in the network, we listed the top five highest degree miRNA, which were hsa-miR-93-5p, hsa-miR-17-5p, hsa-miR-200a-3p, hsa-miR-200b-3p and hsa-miR-141-5p. According to literature review, hsa-miR-93-5p, hsa-miR-17-5p, and miR-141-5p were significantly up-regulated in 75.8% CRC, breast cancer and ovarian cancer respectively (33-35). A negative correlation of hsa-miR-17-5p with overall survival was found in TCGA breast cancer specimens, and miRNA-200 family members were detected associated with brain metastases of gastric adenocarcinoma (36). The lncRNA target genes, as ZEB1, BTG2, MYOCD and FRMD6 are strongly related to tumorigenesis and progression. ZEB1 is widely known as the activator of an epithelial-mesenchymal transition (EMT) and has important roles in metastasis. Mounting evidences showed the double-negative feedback loop of miR-200 and ZEB1 control multiple genes involved in migration, invasion and metastasis (21). Furthermore, it might play a role in tumor regulation of PD-L1, leading to intratumoral immunosuppression (37). MYOCD, contacting with SRF, functions in cardiac muscle and smooth muscle, plays a role in nasopharyngeal carcinoma, breast cancer, and uterine leiomyosarcoma (38,39). BTG2 is known as the tumor suppressor, take part in cell differentiation, proliferation, DNA damage repair and apoptosis (40). The down regulation of BTG2 was detected in breast cancer, renal clear cell carcinoma, GC and prostate cancer. In studies, it was related to tumor size, grade, metastasis, recurrence and poor survival in patients with breast cancer (41). FRMD6 expression activates the Hippo signaling pathway regulating organ size control, cell proliferation and cancer development and antagonizes oncogenic YAP (32). Clinically, it has been identified from microarray data as significantly predictor for the survival of patients with CRC compared to the conventional Dukes’ classification (42). In our ceRNA network, the above genes interact with multiple lncRNAs, which indicates that the lncRNAs in the network are worthy of our researching.

In conclusion, our study constructed a high confidence level of ceRNA network by genome-wide analysis of gastric adenocarcinoma patients from TCGA database with strict filtering criteria according to lncRNA-mRNA-miRNA inner logical relationships. The dysregulated of the cancer specific lncRNAs namely MIR100HG, MAGI2-AS3, AC080038.1, AC010478.1 and MEF2C-AS1 were identified as the candidate for diagnostic biomarker and therapeutic targets. lncRNA AL139147 might be a promising biomarkers for predicting prognosis. Our research may help us further understanding of the ceRNA pathogenesis in GC and guide for further investigation.

Funding: This work was supported by the Science Technology Department of Zhejiang Province (China) under Grant the Public Technology Application Research Program (2017C33045).