Lung cancer is the primary cause of cancerous death among men and the second leading cause of cancerous death among women around the world (1). There are tens of thousands of studies on ways to overcome lung cancer, and there are many prognostic factors associated with lung cancers survival. Targeted therapy based on these prognostic genes has made progress but needs more investigation.

The Sideroflexin (SFXN) family are mitochondrial tricarboxylate carrier proteins, that exist in the mitochondrial membrane (2). This family consists of five closely related members. A series of previous studies observed that SFXNs are associated with metabolism (3,4) and oral squamous cell carcinoma. SFXN2 participates in mitochondrial iron metabolism via the regulation of heme biosynthesis (3) and may contribute to blood pressure regulation and the plaque burden in the carotid artery (5,6). It was found that the serum levels of anti-SFXN3-autoAb increased markedly in patients with oral squamous cancer compared to normal controls. Also, the anti-SFXN3-autoAb serum level could be a potential biomarker during early screening for oral squamous cancer (7). SFXN3 also functions as a new mitochondrial protein regulating synaptic morphology in vivo (8). SFXN4 was identified as a candidate susceptibility gene for common familial colorectal cancer (9). Mutations in SFXN4 are a cause of mitochondriopathy and macrocytic anemia (10). SFXN5 does not correspond to PARK3 (2).

As for SFXN1, previous studies showed that it is significantly regulated in synovitis of osteoarthritis (OA) (11). In diffuse infiltrating gliomas, SFXN1 participates in an optimized gene subset associated with survival differences (12). Recent studies found that SFXN1 functions in the one-carbon metabolism process as a mitochondrial serine transporter (4). Indeed, one-carbon units sourced from serine contribute to cell proliferation in many carcinomas. Therefore, mitochondrial serine catabolism enzymes are commonly up-regulated in cancers. SFXN1 may play an important role in cancer but there have still not been many studies on it. In order to screen for novel prognostic biomarkers for lung adenocarcinoma (LUAD), we examined SFXN1.

In our research, we intend to show the discrepancy between SFXN1 mRNA and protein expression in LUAD tissues and paracancerous normal samples and demonstrate the prognostic value of SFXN1 mRNA expression in LUAD patients by analyzing data from a large patient cohort in TCGA and GEO. The possible reasons for SFXN1 dysregulation will also be investigated. Our research data will provide a basis for further functional exploration of this gene.

Data collection in TCGA and GEO

Immunohistochemistry (IHC) staining data of the SFXN1 protein came from the Human Protein Atlas (HPA; http://www.proteinatlas.org/). This is a large-scale protein research project whose main purpose is to map the locations of proteins encoded by genes expressed in human tissues and cells (13,14). Staining data, including those for lung tissues and LUAD and lung squamous cell carcinoma (LUSC) tissues were downloaded. An immunofluorescence analysis antibody with green fluorescence to SFXN1 was used to detect SFXN1 proteins, and immunofluorescence allowed the location detection of SFXN1 protein expression.

Data management and analysis were carried out with GraphPad Prism 7.0 and SPSS 24.0 software. The significance of SFXN1 expression differences among groups with different clinicopathological parameters was assessed through Welch’s unequal variances t-test. The median served as the cut-off for SFXN1 expression in Kaplan-Meier curves. The significance of differences between the survival curves was assessed with a log-rank test, and χ2 tests were utilized for assessing the statistical difference in clinicopathological parameters between the high and low SFXN1 expression groups. Univariate and multivariate Cox regression analyses were performed to evaluate whether unregulated SFXN1 expression independently predicts OS and RFS in LUAD patients. A P value <0.05 was considered statistically significant. 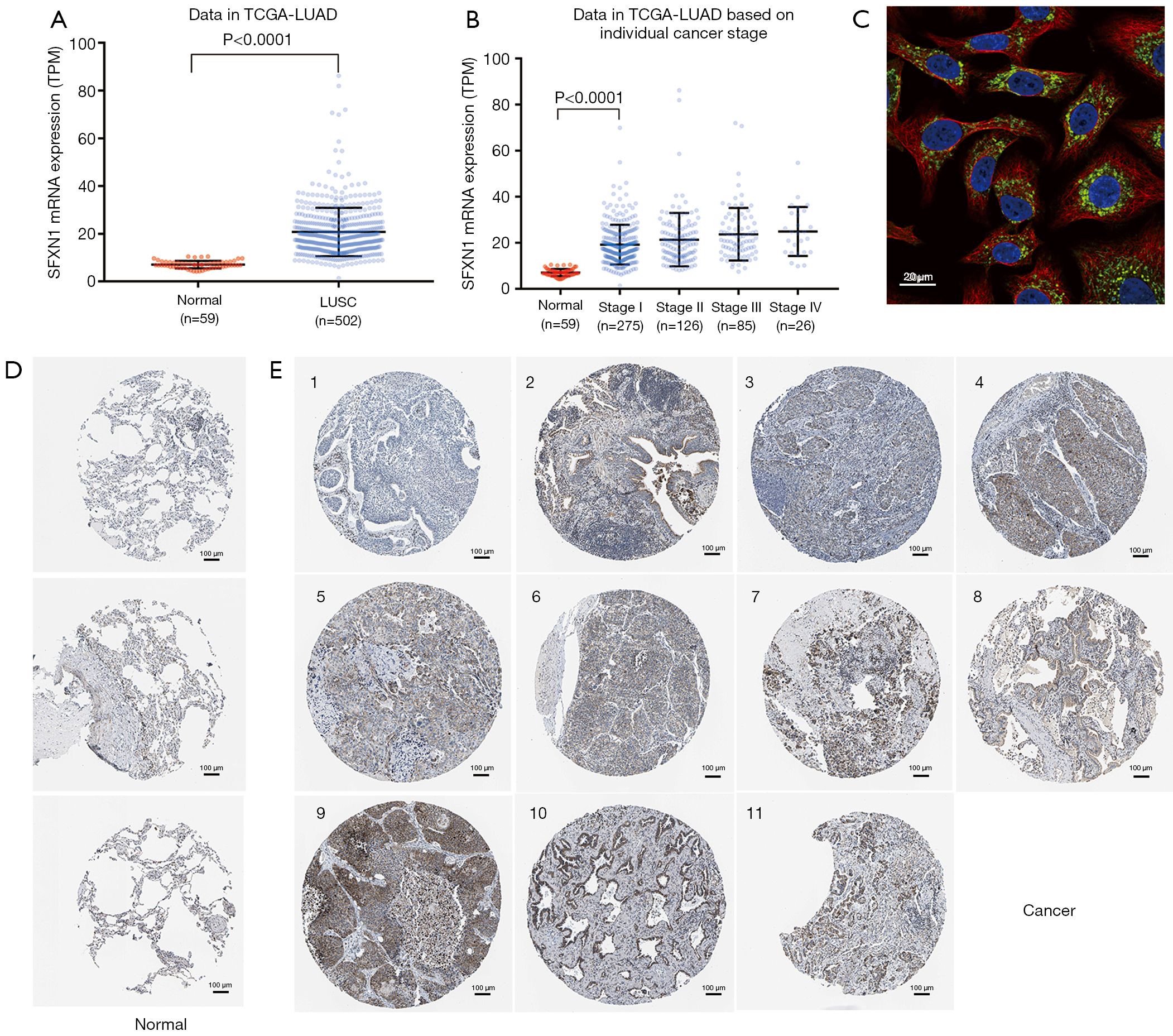 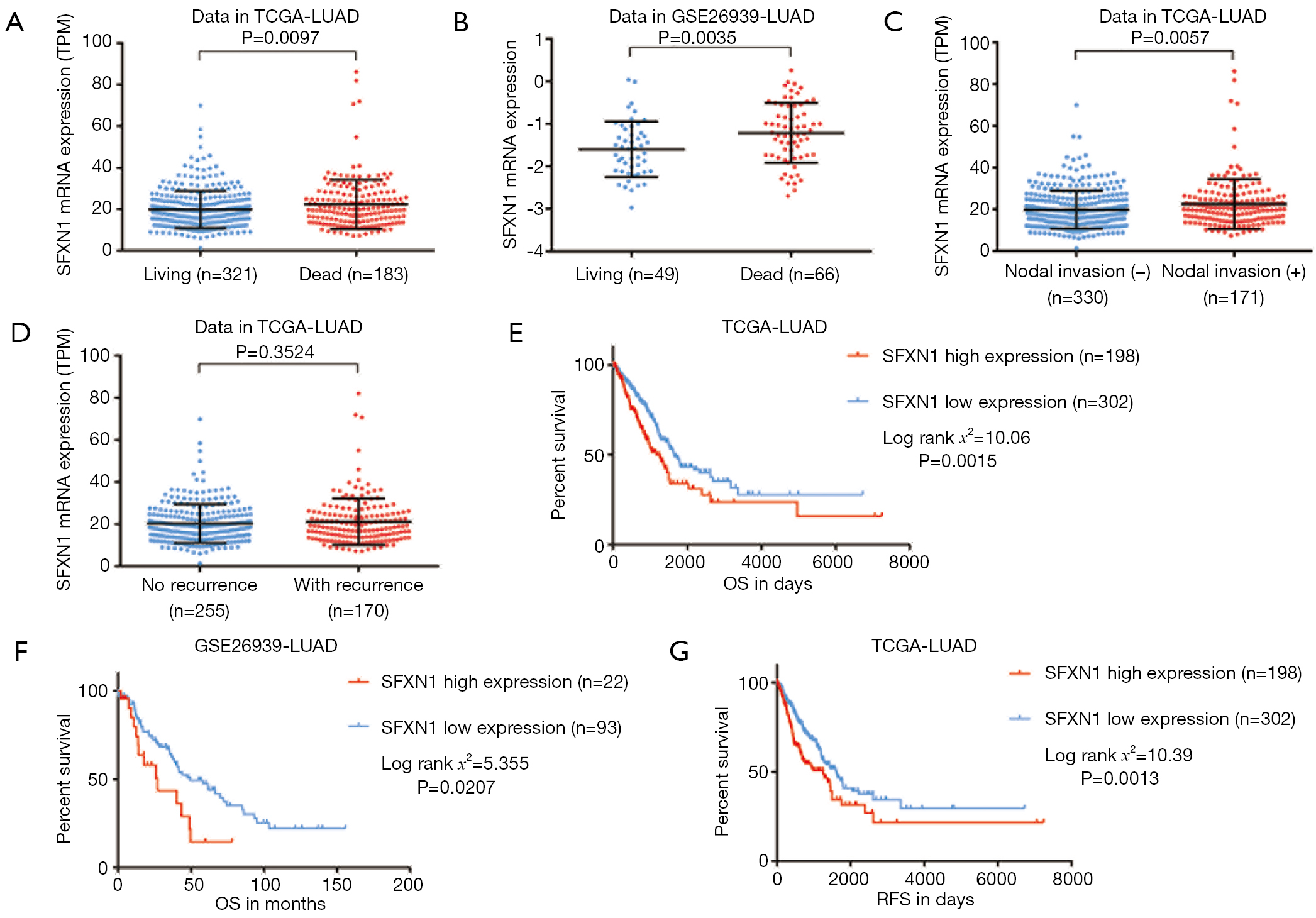 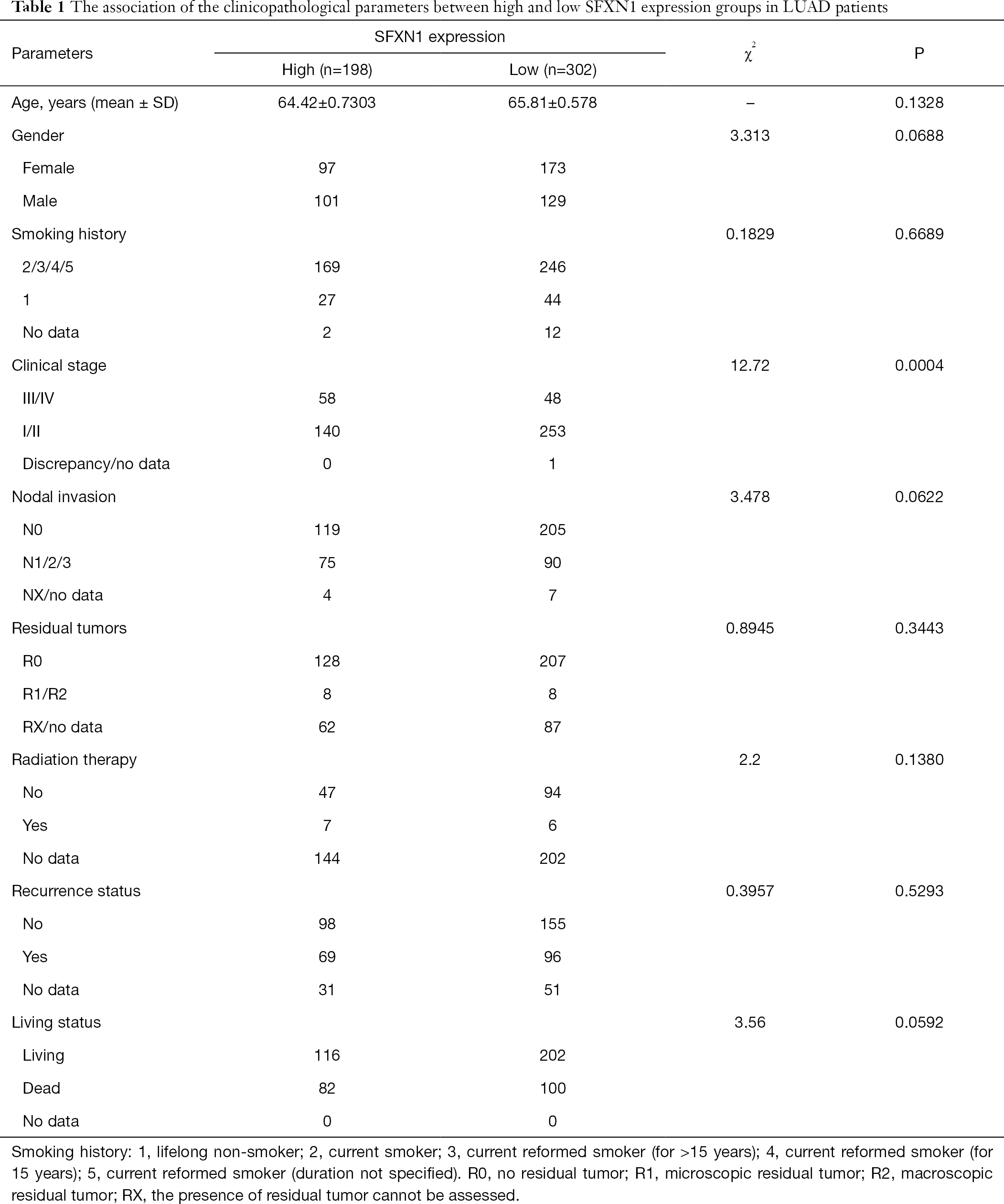 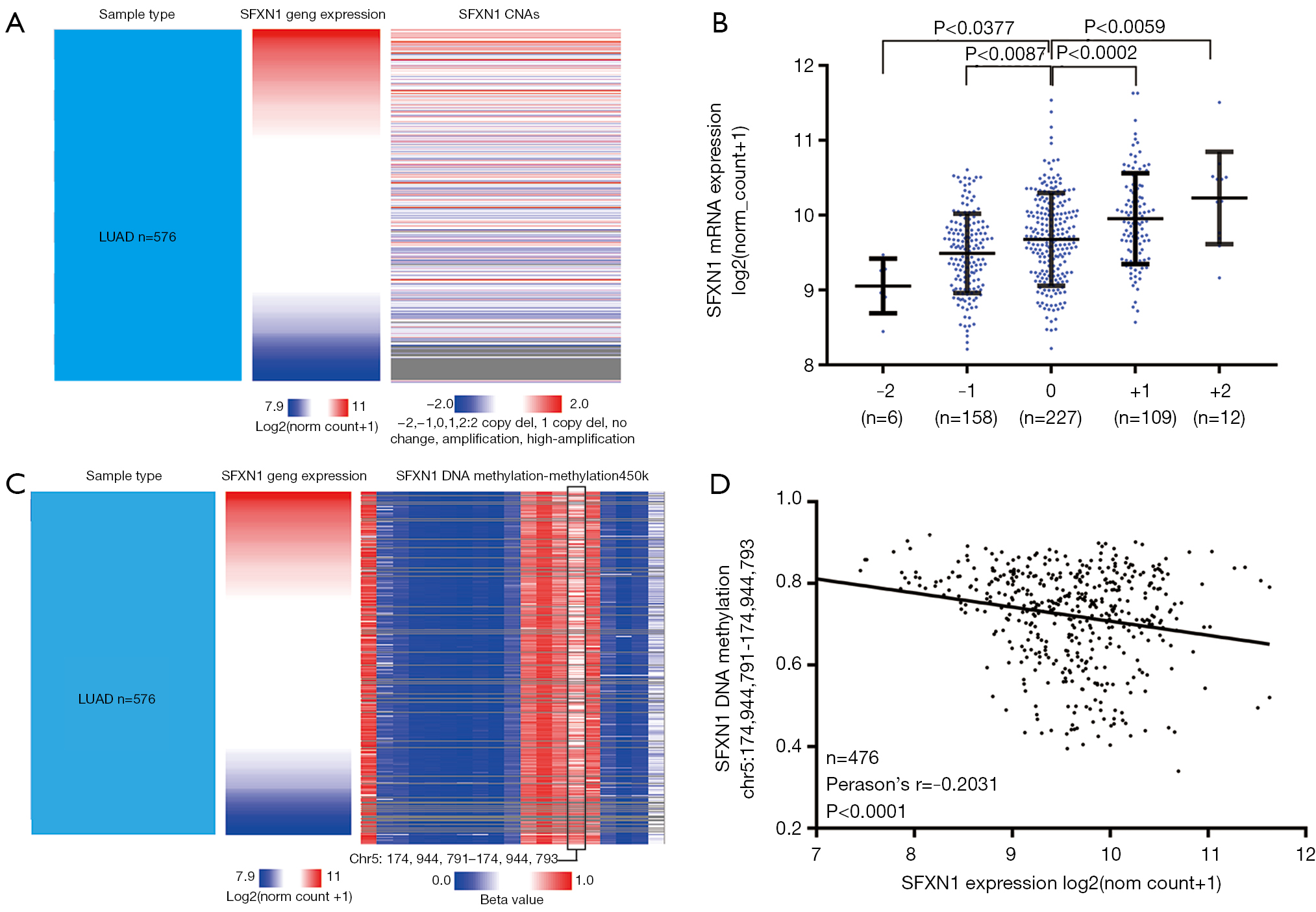 Communication and coordination between mitochondria and the cell play an important role in various cell functions, such as metabolism, multiplication and survival (15). An imbalance in ell energetics is one of the important signals of cancer (16,17). Several potential mechanisms of deregulated cellular energetics are concerned with mitochondrial dysfunction caused by flawed mitochondrial enzymes, mutational mitochondrial DNA, or altered oncogenic signaling (18). Indeed, mitochondrial redox homeostasis control and biogenesis are often upregulated in cancer (19). While nuclear-encoded mitochondrial enzymes responsible for the tricarboxylic acid (TCA) cycle have mutations and generate oncogenic metabolites, human tumors are almost always malignant (20,21). Thus, mitochondria play a central, multidimensional role in the progression of therioma, and targeting mitochondria might be an effective therapeutic strategy (22).

Mitochondria play a central role in the metabolism of one-carbon units (23). One-carbon metabolism focuses on both the folate and methionine cycles and generates one-carbon units (methyl units) (24). One-carbon units are essential for nucleotide synthesis, reductive metabolism and methylation, and cancer cells require these pathways to support a high proliferation rate (25). Therefore, anti-folates, drugs targeting one-carbon metabolism, have been used for cancer treatment for a long time (26,27). The folate analog aminopterin acted as the first drug for leukemia relief (28), and methotrexate is still a mainstay in the management of acute lymphocytic leukemia (29). It was recently discovered that pemetrexed could function as a first-line drug for lung cancer (30). One-carbon metabolism consists of cytosolic and mitochondrial branches, and SFXN1 is a key component because it enables serine to enter mitochondria (4). Amino acids such as serine are a main one-carbon source, and cancerous cells are particularly susceptible to the loss of one-carbon units because of serine restriction or synthesis inhibition (25). Based on these findings, we can infer that SFXN1 may be closely associated with cancer progression. Some previous researches indicated that SFXN1 is abnormally expressed and could act as a pathogenic gene in diffuse infiltrating gliomas. Aberrations of SFXN1 are associated with unfavorable survival in patients with diffuse infiltrating gliomas (12).

In this study, we firstly found that SFXN1 had higher mRNA expression in LUAD than in normal controls. Then analyzing the long-term survival data of large LUAD cohorts from TCGA and GEO, we discovered significantly worse OS and RFS in patients with high SFXN1 mRNA expression. In addition, with univariate and multivariate analyses, we confirmed that upregulated SFXN1 mRNA expression independently predicted unfavorable OS (HR: 1.621; 95% CI: 1.149–2.287; P=0.006) and RFS (HR: 1.678; 95% CI: 1.189–2.369; P=0.003) among LUAD patients. In comparison, although SFXN1 was upregulated in LUSC tissues, no prognostic value associated with OS and RFS was found in LUSC patients. These findings indicate that SFXN1 could act as a valuable and specific prognostic biomarker in patients with LUAD.

SFXN1 may participate in an iron handling gene signature associated with survival in diffuse infiltrating gliomas (12). However, the specific mechanism of SFXN1 warrants a more pointed and specific investigation. Mechanistically, recent studies have shown that SFXN1 could be the main mitochondrial serine transporters in human cells and SFXN1 is expressed in some cancers, most highly in leukemias and lymphomas (4). Thus, SFXN1 becomes an important node in regulating the fate of serine and plays unexplored roles in cancer cell growth.

Many studies have revealed associations between DNA CNA and gene expression, as well as the changing methylation status of CpG islands and gene expression. In this research, we further investigated the possible reasons of SFXN1 dysregulation in patients with LUAD. The results showed that DNA CNAs and DNA methylation are possibly two significant reasons for SFXN1 overexpression in LUAD. Above all, genetic and epigenetic alterations frequently appear in LUAD patients and may have a profound effect on tumor phenotypes and patient survival. Consequently, it is meaningful and necessary in the future to find out how the genetic and epigenetic alterations of SFXN1 affect cancer cell behaviors in LUAD. Also, the relationship between CNA/methylation and clinical pathological features or evaluation of the CNA/ methylation and OS and RFS should be performed in the future.

Funding: This work was supported by Science and Technology Foundation of Guizhou Province (grant numbers CK-1130-036).