Primary hepatocellular cancer (HCC) is common worldwide and is one of the most common causes of cancer mortality (1-4). Currently, surgical treatment is available to improve outcomes in some selected patients (5). However, primary lesion, tumor metastasis, and concomitant underlying diseases (such as cirrhosis) should also be taken into consideration for surgical resection.

Various cancer stage systems have been proposed to stratify HCC patients to help physicians decide on surgical treatment. Some common stage systems are tumor-node-metastasis (TNM) stage, Okuda staging, Cancer of the liver Italian Program (CLIP) score, Barcelona Clinic Liver Cancer (BCLC) stage, Chinese University Prognostic Index (CUPI), and Japanese Integrated Scoring (JIS) (6-10). The European Association for Study of Liver (EASL) in 2012 and the American Associations for Study of Liver Diseases (AASLD) in 2017 published guidelines for HCC treatment reporting well-defined hepatectomy indications for HCC: patients with a single HCC <5 cm or up to 3 tumors all less than 3 cm with completely preserved liver function and no portal hypertension (11,12). However, the above guidelines excluded some potentially resectable HCC patients to some extent.

The use of neoadjuvant therapies for successful curative interventions in down-staging HCC has seen a significant rise owing to the recent advances in oncology. Adjuvant therapies, however, were already in use to control local recurrence or distant metastasis before acceptance for use in HCC. HCC patients with portal vein hypertension have a more dismal outcome in contrast to compensated patients. The effects of cirrhosis on surgery are unclear, given the existence of different clinical stages in the histological variability of cirrhosis. So it is worth noting that some cirrhosis patients without portal vein hypertension might have curative hepatectomy beyond limitation on anatomical information (tumor size and number). Nevertheless, There is a need for a new accurate prediction system for surgical resection among HCC patients.

Serum AFP is a widely used cancerous biomarker for hepatocarcinogenesis and is a prognostic indicator for recurrence (13,14). Higher AFP levels reportedly are associated with nodular size, microvascular invasion (MVI), and other factors (15-18). A French study group subsequently combined blood AFP level with nodules number and size, considering the simplicity and feasibility, and the result showed the effect of integration on prognosis after liver transplantation (16,19,20). However, whether the AFP score model could predict the prognosis of HCC patients after liver resection needs further research.

To that effect, we proposed the AFP score model based on the preoperative AFP levels combined with nodule number and size to predict the prognosis of HCC patients after liver resection in the present study.

We recruited 397 patients with HCC from the Prince of Wales Hospital, Hong Kong, China, from November 2001 to November 2013. The criteria for patient inclusion were: (I) the presence of positive HBsAg; (II) liver function tests showing Child-Pugh grade A and clearance of indocyanine green less than 15% at 15 minutes (ICG-R15); (III) absence of distant metastasis; (IV) patients who accepted curative liver resection; (V) patients without autoimmune liver diseases or serious heart, lung, kidney, or blood diseases. The criteria for patient exclusion were: (I) the presence of other types of malignant tumors; (II) accompanied by portal vein hypertension; (III) the presence of other types of hepatic viral infections. Chart flow for patient selection is shown in Figure 1. All patients or their legal representatives gave written informed consent for all investigations and inquiries that were conducted during this study. The hospital ethical committee approved the design of the study.

Serum AFP concentration was measured using the electrochemiluminescence immunoassay (E170 Analytics; Roche Diagnostics Corp., Indianapolis, IN) (21). The AFP data included in this analysis are preoperative measurements obtained before the date of resection. The data on other biochemical markers, including albumin, alanine aminotransferase (ALT), and bilirubin, were retrieved from the medical records of patients. The degree of fibrosis (including cirrhosis) was diagnosed by imaging examination (ultrasonography, CT, or MRI) or pathology. Microvascular invasiveness was diagnosed in liver specimens by pathology. Following resection, all liver specimens were examined by a single, dedicated liver pathologist who was blinded to all patients’ identities and clinical outcomes.

The AFP score is calculated by adding individual points for each obtained variable, as shown in Table 1 and was calculated for each patient enrolled in the study (Table 1). 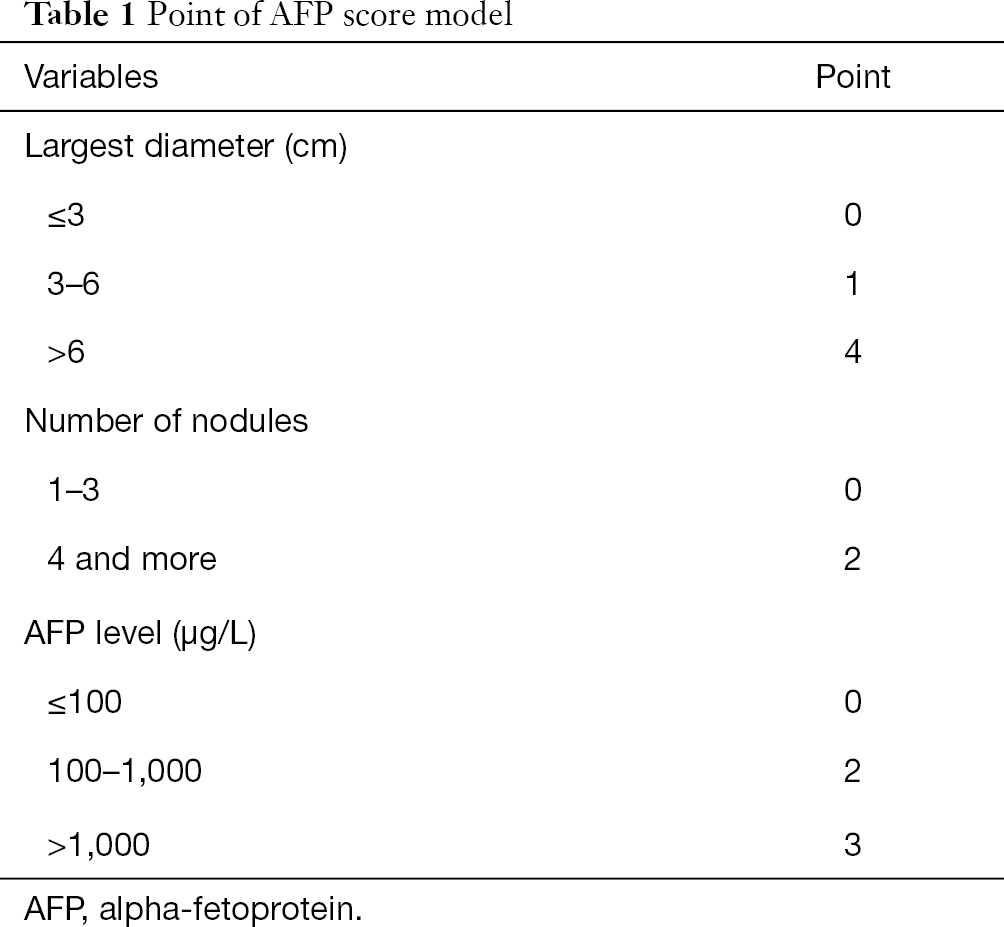 Follow up evaluation were performed in outpatients every three months during the first postoperative year, every four months of the second postoperative year, and every six months after that. Images with CT or MRI were obtained during postoperative follow-up examinations. Tumor recurrence was diagnosed using CT or MRI scans. OS was defined as the time from operation to death or 8 November 2018; DFS as the time from curative hepatectomy to the first occurrence of either intra- or extra-hepatocellular metastasis.

All statistical analyses were performed by SPSS 20. Continuous variables are shown as the means ± standard deviation. The One-way analysis of variance (ANOVA) was used to identify significant differences. Categorical variables by the chi-squared test were used to identify significant differences between groups. The ROC curve was generated to identify the AFP score to categorize survived patients. A Kaplan-Meier survival curve was used to estimate recurrence and survival. The univariable Cox regression was carried out to evaluate the effects of various clinicopathological variables on survival. Only results with a P value <0.05 were considered statistically significant. 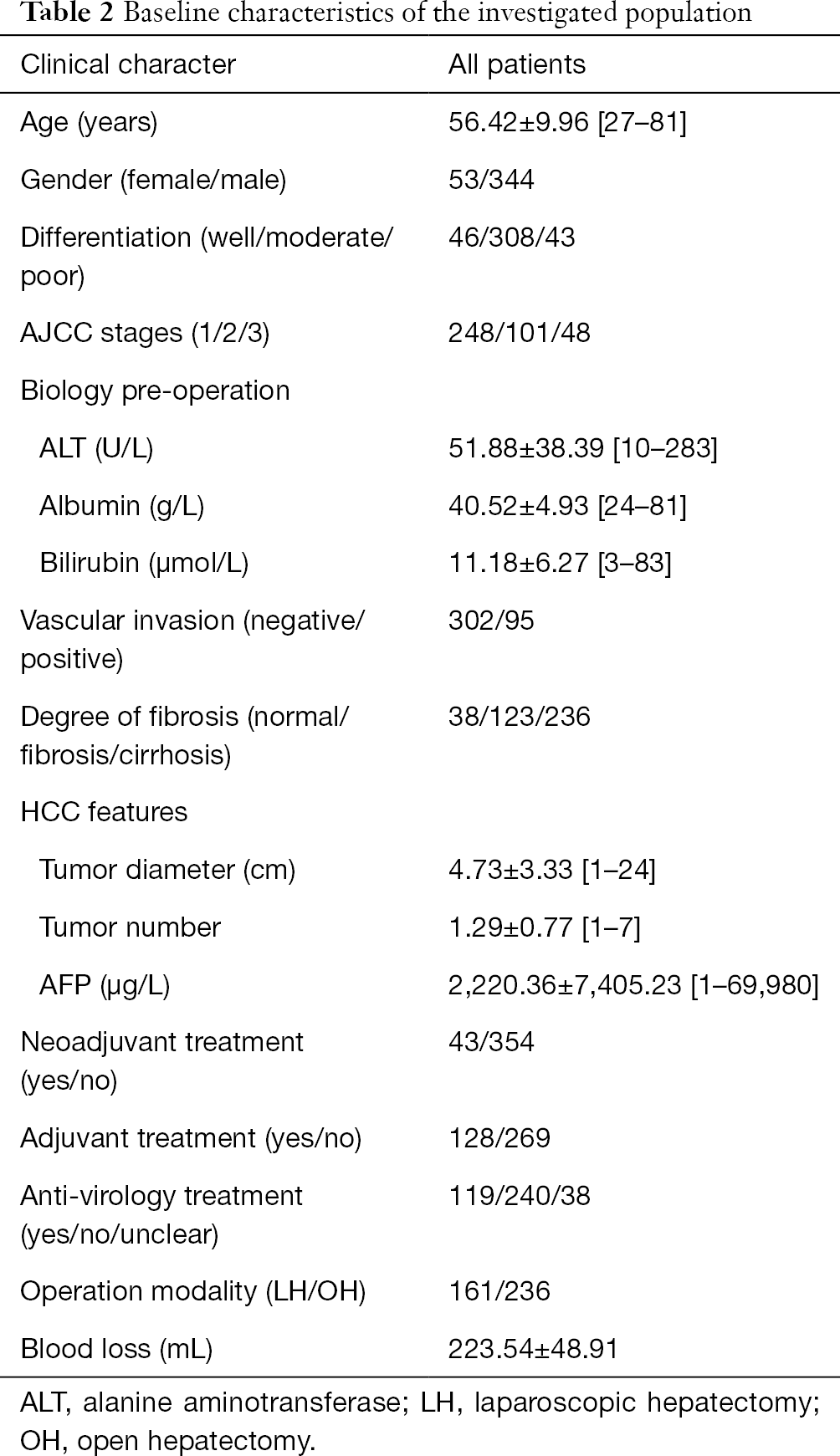 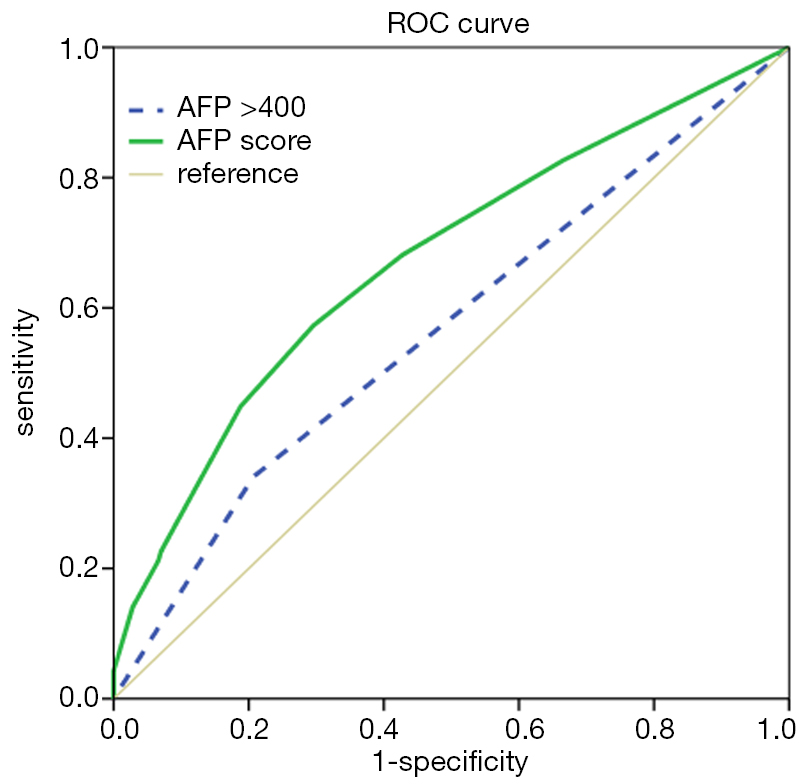 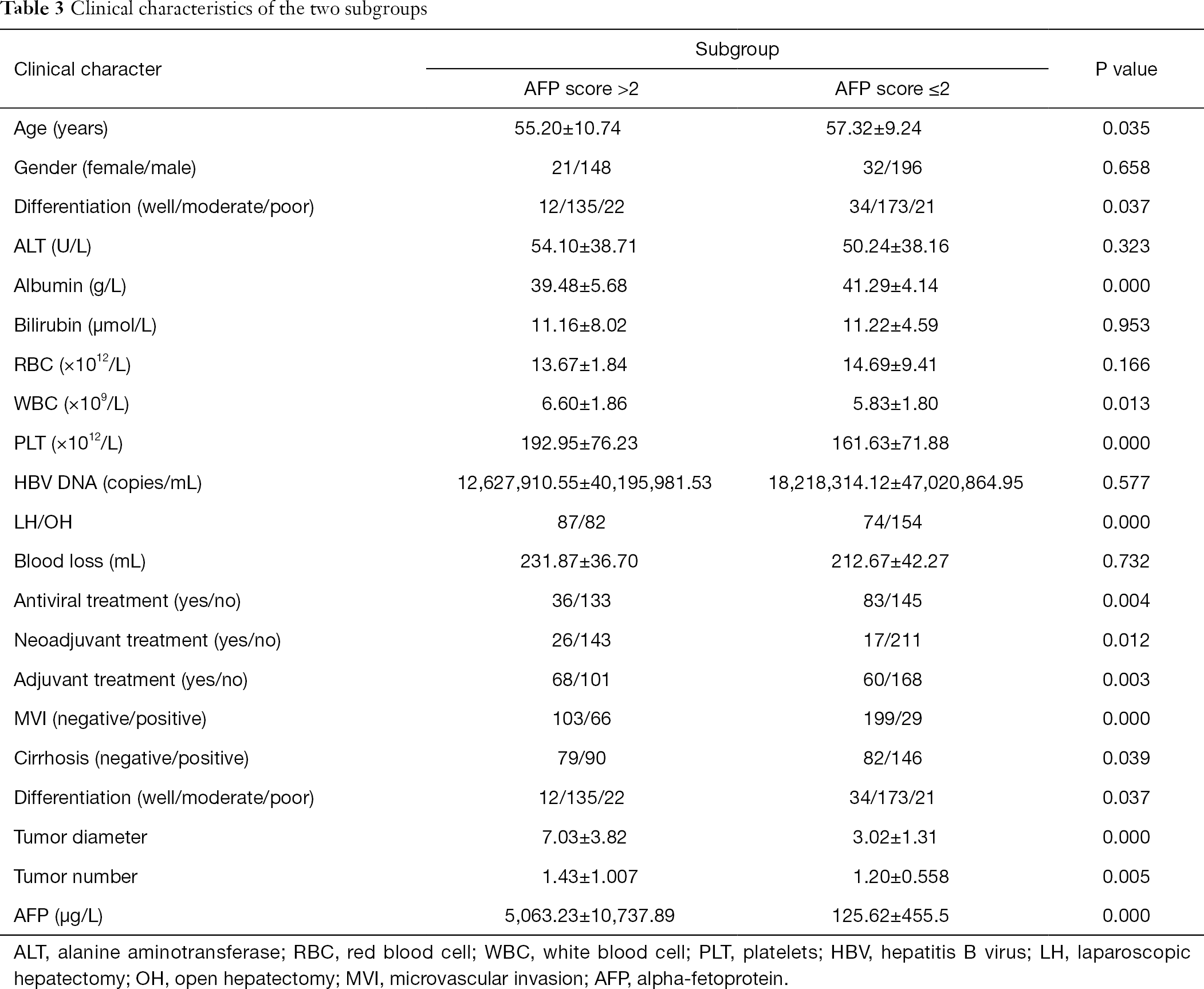 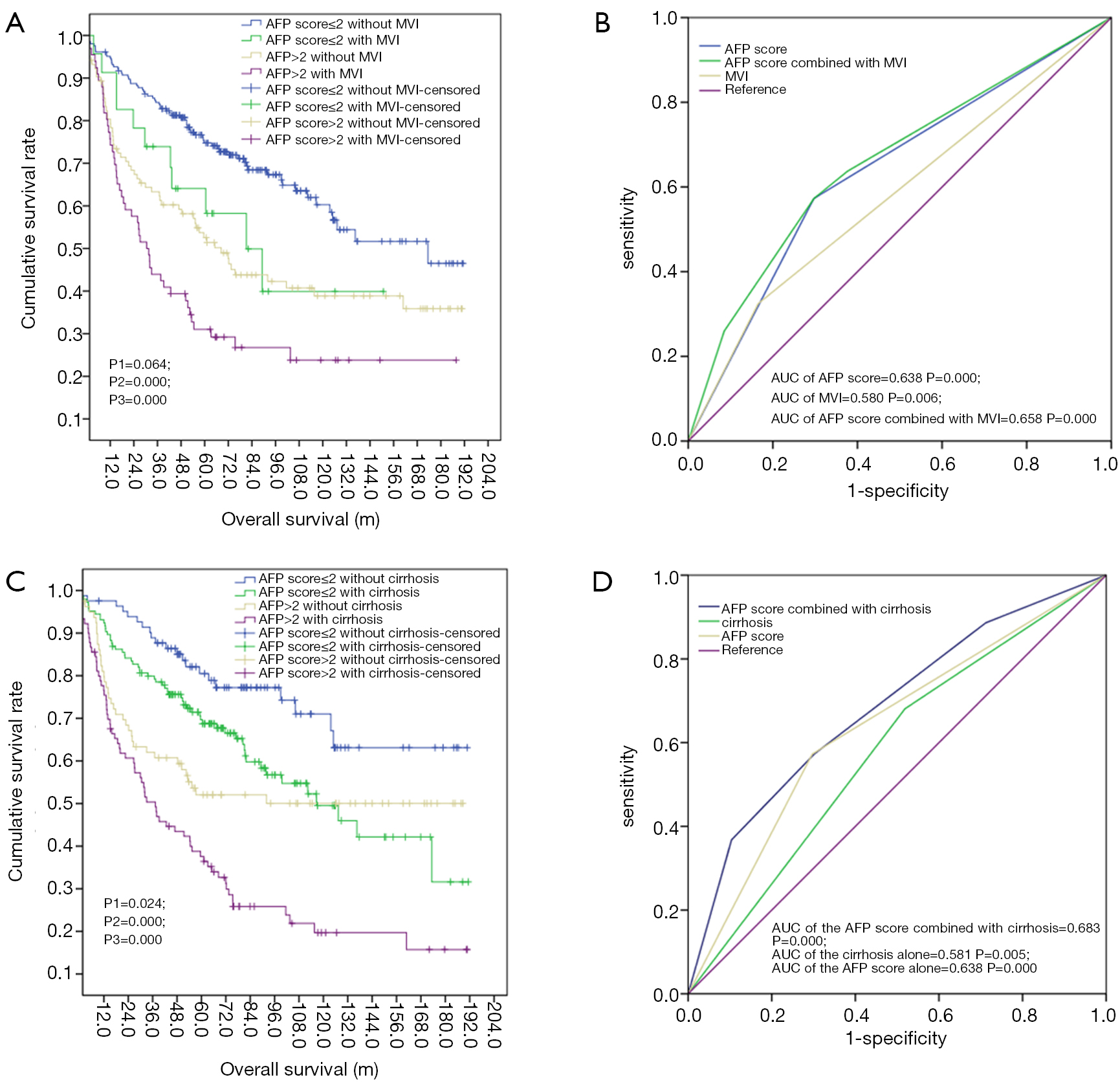 Previous studies have highlighted the interaction between AFP levels and other biological and pathophysiological roles in cancer (17,18). Our group reported previously that preoperative serum AFP levels >400 µg/L predict poor overall and recurrence-free survival after hepatectomy (22). In the present study ROC curves showed further that the AFP score model could predict outcomes effectively after HCC resection when the AFP score value is 2. Notably, applying the ROC curve method, the present study showed that an AFP score >2 has a better sensitivity or specificity in predicting survival than AFP >400 µg/L alone. The AFP score >2 exhibited superior categorization of HCC prognoses after resection, which could be used to stratify patients and guide follow-up. The result is similar to previous reports that the AFP score model has a prognostic value in HCC recurrence after liver transplantation (20). The above data suggest that the AFP score model might be a powerful prognostic marker for HBV-related HCC patients after radical resection.

Combining several other factors with the AFP score model would provide comprehensive and individualized risk assessments. It is accepted generally that MVI and cirrhosis are strong prognostic factors for poor outcome after liver resection (23,24). Our past data had also confirmed the effects of cirrhosis alone on prognosis in HCC patients after resection (25). In the present study, we combined the AFP score with MVI or cirrhosis to stratify patients according to responses to therapy. Data obtained from these inquisitions showed that an AFP score >2 with or without MVI decreased the risk of survival significantly. The ROC curve results indicate that the new combination of higher AFP scores with MVI at an initial visit predicted more poor survivals, which may help guide clinicians to predict disease prognosis. On the other hand, AFP ≤2 with MVI induced no significant difference in OS.

A previous study reported that MVI is common in HCC patients with large size and multiple nodules (10). Nevertheless, the effect of AFP on angiogenesis in HCC remains unclear to date. So whether an AFP score ≤2 is related to MVI or not needs further research. We added more confidence in the ability to predict clinical prognosis by combining the AFP score and cirrhosis rather than go with cirrhosis alone. A chronic viral infection reportedly induces inflammation, which progresses eventually to cirrhosis. Chronic viral inflammation and the degree of fibrosis play very important roles in determining postoperative survival and DFS in patients with HCC (26-28). However, we did not, at this time, compare the degree of cirrhosis in predicting the prognosis of HCC. We expect to investigate these claims in subsequent studies.

It is accepted widely that proper treatment affects the progression and prognosis of HCC, with the outcome of antiviral therapy on HBV-related HCC recurrence after hepatic resection an example of positivity (29). However, we did not observe a similar significant improvement in survival among the 119 patients with clear antiviral treatment before hepatic resection. More research should stratify patients according to the type of antiviral treatment, HBV DNA level, and immune status before surgical resection.

It is worth noting that surgical resection offers a curative option and a better OS. Some meta-analyses have revealed significantly improved outcomes following LH in patients with HCC and underlying cirrhosis (30,31). In the real world, patients receive surgery and perioperative anti-treatment to improve OS and DFS. Adjuvant and neoadjuvant treatments have gained popularity according to the therapeutic algorithms for CC. Previous research has shown that local ablation, TACE, and sorafenib provide significant survival benefits (32-35). Yet, in the present study, LH and OH provided a similar impact on survival or recurrence. Although neoadjuvant/adjuvant therapy was used to downstage and control distant metastasis, no improvements were observed in survival and recurrence in our patients. As a matter of fact, in this present research, the relatively relaxed included criteria and insufficient data might have led to negative results. New clinical trials to determine the effects of anticancer therapy in HCC patients are needed.

Some limitations to the present study should be noted. First, this is a retrospective study from a single center. Second, the selection criteria for HCC patients were very restrictive, with patients who did not have blood AFP data, patients who presented incomplete medical records, those with relatively worse liver function, or those who failed to be followed up excluded. So, the study sample size was relatively small, especially for the subgroup analysis. Therefore, comprehensive, randomized multicenter studies are required to recruit high homogeneous patients and analyze patients with complete data.

In conclusion, our data suggest that the AFP model categorizes HCC patients with relatively good liver functions after radical resection into low and high-risk prognoses. This important finding suggests that the adoption of the AFP score model combined with MVI or cirrhosis is a powerful prognostic predictor for HBV-related HCC. Comparisons of pathological features and liver disease etiology between the high and low AFP score groups warrants further research.

Ethical Statement: The hospital ethical committee approved the design of the study. The authors are accountable for all aspects of the work in ensuring that questions related to the accuracy or integrity of any part of the work are appropriately investigated and resolved.