Intracystic papillary breast carcinoma with DCIS in a man: a case report

Male breast cancer accounts less than 1% of breast cancer diagnosed (1-3). It is mostly associated to BRCA2 mutation, but can be sporadic amongst men affected by gynecomastia or sexual hormones disequilibrium (4). Results from the EORTC 10085/TBCRC/BIG/NABCG International Male Breast Cancer Program showed histologic grade was not significantly correlated with clinical outcome, unlike what is seen in female patients (5). In that case series male breast cancer patients have had worse survival outcomes compared with those of female patients. An analysis of the Surveillance, Epidemiology and End Results (SEER) data from 2005 to 2010 found 5-year survival rate for male patients was lower than that for female patients (82.8% vs. 88.5%) (6). Specifically intracystic papillary tumours are less than 5% of all men breast cancers (7). Diagnosis is sometimes delayed because ultrasound scan and fine needle cytology may report cystic disease and may not report the papillary component. Surgical excision of the lump with margins in excess of 2 mm is considered satisfactory (7). Sentinel lymph node biopsy (SLNB) is recommended as data have shown the risk of finding an invasive cancer in the final histology. Radiotherapy following intracystic papillary carcinoma alone is of uncertain significance as this form of cancer is usually low grade and rarely recurs (7).

A 56-year-old man with bilateral gynecomastia and without familial history of breast cancer presented with a 50-mm lump in the central quadrant of his left breast. The lump was not painful, and was not associated to nipple discharge. Mammogram showed 50-mm round mass in the left breast behind the nipple. Breast ultrasound scan showed an anechoic mass containing vascularised hyperechoic 2.5 cm lesion (Figure 1). Core biopsy showed papillary neoplasia. The patient underwent left wide local excision and radio-guided sentinel lymph node biopsy. Pathology report showed low-grade intracystic papillary carcinoma (Figures 2,3), surrounded by several foci of ductal carcinoma in situ (DCIS) involving excision margins as shown in Figure 4 and Figure 5. Sentinel nodes were 3 and were negative for metastases. Patient was rescheduled for left total mastectomy. The staging at final pathology report was pT2N0M0. Oestrogen and progesterone receptors were 90%; Ki67% was 13%; HER2/neu oncogene was not amplified. The case was discussed at multidisciplinary meeting and the patient was prescribed hormonal therapy with tamoxifen for 5 years. Radiotherapy was not prescribed. 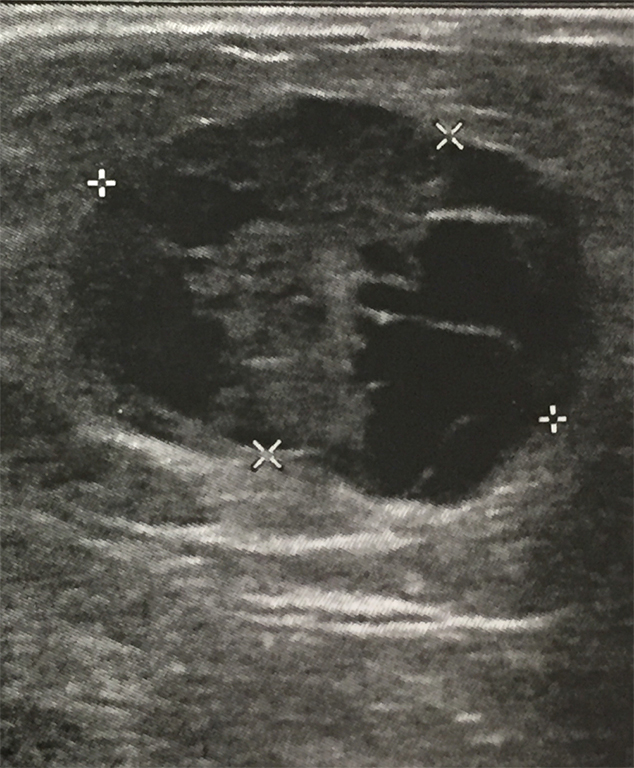 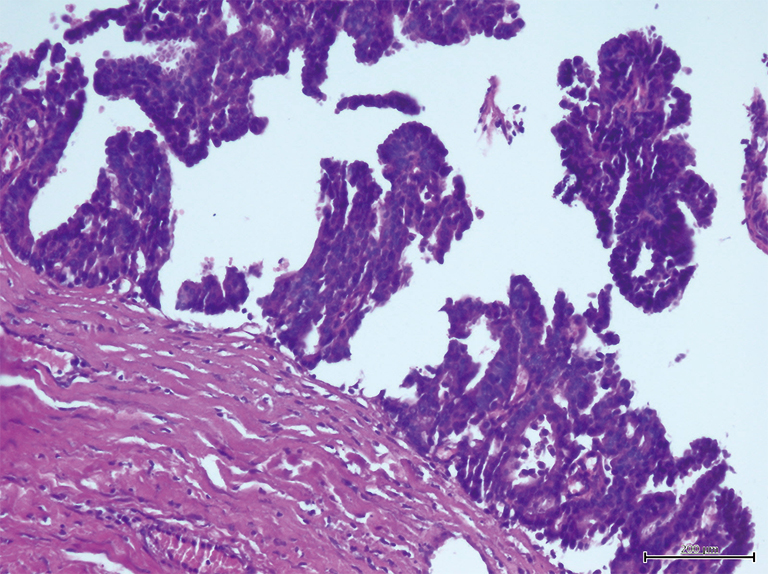 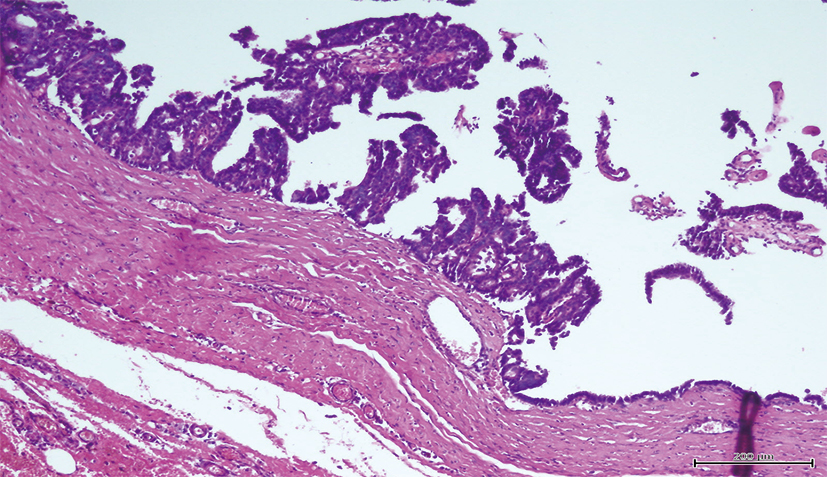 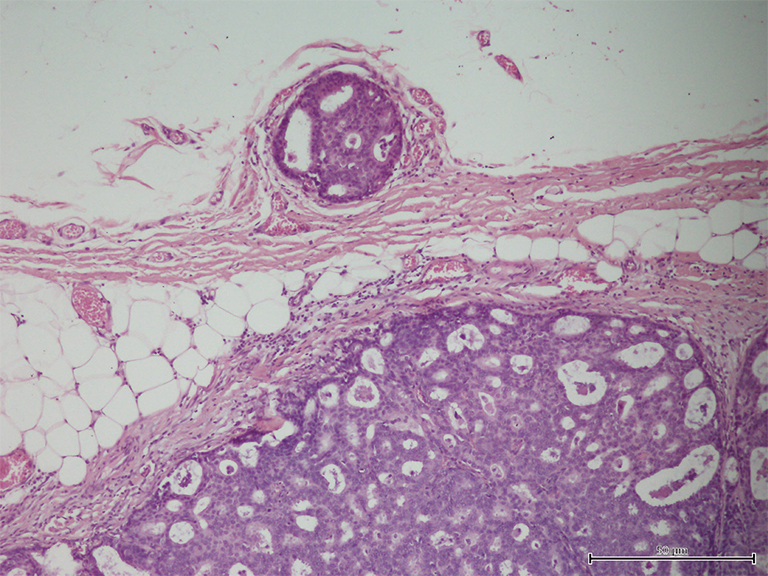 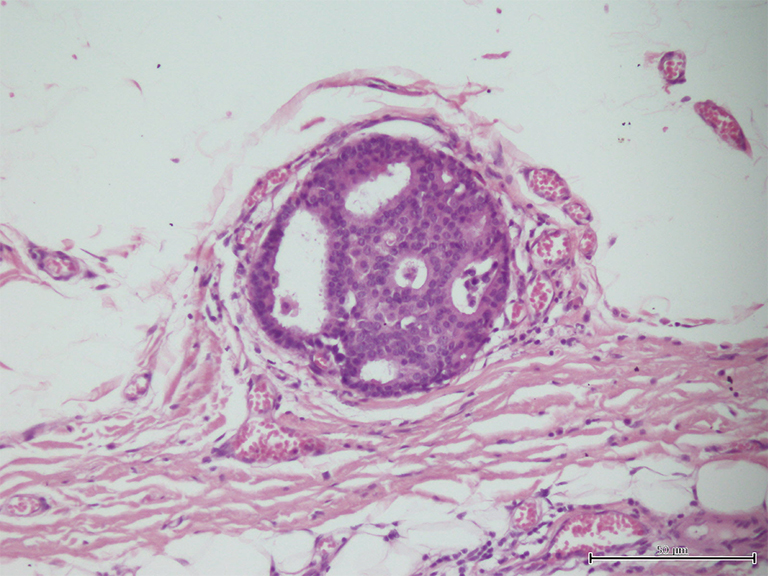 Papillary lesions of the breast are exclusively intraductal neoplasms, although rarely an invasive carcinoma of the breast may have a predominantly papillary architecture. Papillary lesions comprise intraductal papilloma, papilloma with atypical ductal hyperplasia (ADH), papilloma with DCIS, intracystic (encapsulated) papillary carcinoma and intraductal papillary carcinoma (8). Although the diagnosis of papillary lesion is typically not difficult, the distinction among those entities is not always straightforward. Nipple discharge or a palpable mass may be clinically evident, depending on the location and size of the lesion (8). Intracystic papillary carcinoma is morphologically similar to intraductal papillary carcinoma with the exception that the myoepithelial cells are absent at the surrounding thick fibrous capsule. These lesions have been traditionally regarded as a variant of DCIS by most authors given their discrete nodular growth, lack of stromal reaction, and indolent clinical behaviour (8). These lesions often present with an expansile growth pattern and occasional lymph node and distant metastasis have been reported. Intracystic papillary carcinoma has a favourable prognosis with adequate local therapy alone in the absence of DCIS or invasive carcinoma in the surrounding breast tissue (9-12). The presence of concurrent DCIS in the adjacent breast tissue is associated with a higher risk of local recurrence. Based on the overall molecular changes, it is suggested that intracystic papillary carcinoma is closer to DCIS than to invasive carcinoma (8,13). The incidence of nodal metastases is extremely low, thus axillary dissection is not justified. According to Wang et al., the incidence of nodal metastasis was 2.7% amongst a group of 99 women (14). Therefore, an alternative might be sentinel node biopsy (14-16), which is considered prudent among this population (17). Our patient was not scheduled for radiation therapy because the addition of radiation to the treatment of patients has not shown to impact the incidence of local recurrence or likelihood of death compared to those who did not receive radiation (16,17). Grabowski et al. investigated on the long-term prognosis of patients diagnosed with intracystic papillary disease with an analysis of over 900 cases (17). At 10 years, the cumulative survival rate of intracystic papillary disease with in situ component was 96.8% (P=0.75) (17) according to the Californian Cancer Registry (CCR). This database includes information about histology, patient demographics, disease stage at diagnosis and survival, but does not specify adjuvant therapies. Solorzano et al., showed disease-specific survival rate of 100% among forty patients. Only one third of this population had received radiotherapy. Although the indication to endocrine therapy remains unclear and controversial, Fayanju et al. concluded that patients with intracystic papillary carcinoma and DCIS or microinvasion had significantly increased use of endocrine therapy versus patients with pure intracystic papillary carcinoma (P<0.01) (18).

Intracystic papillary breast carcinoma is a rare entity amongst male patients, occurring in less than 5% of patients. Although its rarity, intracystic papillary breast carcinoma is considered a curable disease because of its biology. The optimal treatment remains surgery with clear margins and sentinel node biopsy. If surrounded by DCIS foci, mastectomy is recommended rather than wide local excision. Radiotherapy and chemotherapy are not recommended, whereas hormonal therapy is generally prescribed when hormonal receptors are expressed. Patients with papillary intracystic disease are deemed at excellent prognosis.