In the past decades, Sanger sequencing was the most commonly used assay for mutation detection. At present, Sanger sequencing remains the gold standard in clinical practice and may detect unknown mutations (6,7). However, it is time-consuming and may delay the clinical-decision making (8). Besides, it has low sensitivity because the mutant tumor cells are required to more than 20% of all detected tumor cells, possibly leading to the false-negative result (9). Currently, many detection assays with higher sensitivity have been developed for mutation detection. Amplification refractory mutation system PCR (ARMS-PCR) has been approved by the China Food and Drug Administration (CFDA) and become a widely used method in clinic practice. ARMS-PCR is more sensitive than Sanger sequencing with its detection limit of about 1% (8). However, because the fluorescent signals are determined through calculating the value of ΔCt, sometimes it is highly subjective and difficult to make the determination of the conclusive results. Mutation-selected amplification specific system PCR (MASS-PCR) is a novel quantitative PCR (qPCR)-based assay to detect mutations. As only mutant gene emits a fluorescence peak in the cyclic amplification, it solved the defect of ARMS-PCR (10). In this study, we compared the accuracy and sensitivity of ARMS-PCR and MASS-PCR and evaluated the clinical feasibility of MASS-PCR, purposed to supply an alternative possibility to be more effective and exact in mutation detection.

MASS-PCR is a qPCR-based assay with specific primers and probes that target at the common mutations of EGFR, KRAS, BRAF, HER2, MET exon 14 skipping mutation, ALK fusion, and ROS1 fusion genes. MASS-PCR was performed in a StepOne™ PCR System (Thermo Fisher Scientific, Waltham, MA, USA) according to the manufacturer’s instruction. The one-step method was applied in all gene mutations detection, including ALK fusion and ROS1 fusion genes. The kit was bought from the Shanghai Tongshu Biotechnology Co., Ltd.

The isolated DNA samples were re-tested with ARMS-PCR. ARMS-PCR was used to detect the same mutation as MASS-PCR assay. For the detection of ALK fusion and ROS1 fusion genes, the two-step method was needed. Briefly, RNA was extracted from FFPE tissue and produced into complementary DNA (cDNA) according to the manufacturer’s instruction. cDNA was then used to determine the genotype. The kit was brought from the Beijing ACCB Biotechnology Co., Ltd.

Sanger sequencing was performed to verify the genotype. DNA was used as a template to amplify the involved genes. PCR products were then sequenced using Sanger method.

The statistical analysis and graphic generation were performed in SPSS 19.0 and MedCalc 19.0. The concordance rate of MASS-PCR, ARMS-PCR, and Sanger sequencing in identifying mutation status was analyzed by kappa test. P<0.05 was considered to indicate statistical significance.

This study recruited 293 patients with lung cancer, in which there were 226 males (77.1%) and 67 females (22.9%) (Table 1). The age of patients ranged from 29 to 86 years old with the median age of 64-year-old. All the detected samples were originated from FFPE tissues. Most patients in our study were diagnosed as NSCLC accounting for 95.2%, in which, squamous cell cancer accounted for 29.4%, and adenocarcinoma accounted for 60.4%. Small cell lung cancer (SCLC) only accounted for 2.0%.

Table 1 Clinical information of patients in this study
Full table 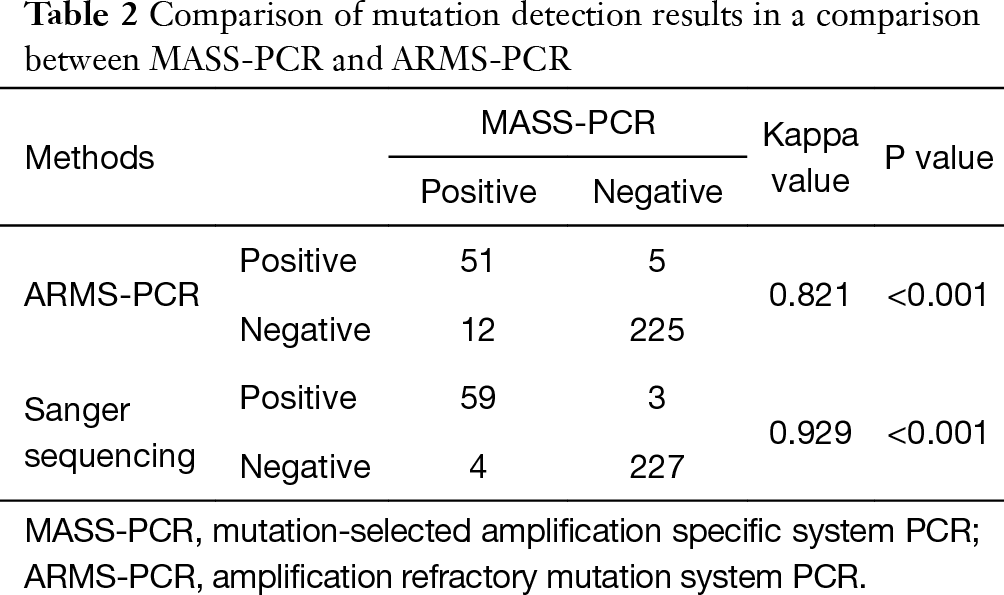 According to histologic features, lung cancer is mainly divided into NSCLC and SCLC, and NSCLC accounts for more than 80% of all lung cancer patients. Recently, with the fast development of genomic medicine, many oncogenic driver mutations have been identified. The common mutations are mostly found in NSCLC while infrequent in SCLC. Among these mutations, EGFR mutation has the highest occurrence rate with 10–15% frequency in NSCLC (2,11), and the frequency was much higher in East Asian patients. In our study, we recruited 293 lung cancer cases with only 6 SCLC cases, and only 1 SCLC case was detected to harbor mutation. Based on the identified oncogenic driver mutations, lung cancer patients would be recommended to receive targeted therapy.

Clinically, before the targeted therapy, the patients need to detect if they harbor the gene mutations that had corresponding targeted drugs. Currently, Sanger sequencing and ARMS-PCR are the main technologies to determine the genotype in the clinic (12). Sanger sequencing (also named as direct sequencing), uses the target DNA single-strand as template to synthesize a new strand upon the catalysis of DNA polymerase. When the fluorescently labeled dideoxynucleotide is selectively synthesized into a new strand, the new strand synthesis is terminated, thus obtaining a series of DNA fragments with varying lengths. Subsequently, electrophoresis was performed to purify the PCR products, then conducting DNA sequencing (13). ARMS-PCR based on the principle that the 3'-terminal nucleotides of the PCR primer must be complementary to its target sequence for efficient amplification. In the amplification system, allele-specific PCR primers and probes labeled with fluorescence are present, and specific fluorescent signals would be generated to indicate the mutant- or wild-type genes (10,14). Compared with Sanger sequencing, ARMS-PCR has a high sensitivity, high specificity and time-saving methods to detect mutations. Although the detection limit of ARMS-PCR is 1%, much lower than that of Sanger sequencing, Sanger sequencing is recognized as the gold standard in the mutation detection, because the positive result detected by Sanger sequencing is a real positive statue. Therefore, Sanger sequencing was used to verify the mutation results in our study. The main limitation of ARMS-PCR is that the determination of mutation status could be subjective when the peak shapes produced by mutant- and wild-type genes are different (15). To solve this defect, MASS-PCR appeared. MASS-PCR is developed based on ARMS-PCR. Only the mutant gene emits a fluorescence peak in the cyclic amplification, and the amplification of wild-type templates is suppressed. Thus, it is considered a positive result as long as the fluorescence peak is generated, reducing the subjectivity on the final determination of detection results (10).

In our study, we compared the performance of MASS-PCR and ARMS-PCR in 293 lung cancer cases. Results revealed a high consistency rate between the two methods. MASS-PCR had a higher consistency rate with Sanger sequencing than with ARMS-PCR. Further analyzing the samples with inconsistent results, we found that 11 of 20 samples were verified to harbor mutations by Sanger sequencing. These samples also detected to be positive by MASS-PCR but not ARMS-PCR. For the rest 9 samples that were detected to be negative by Sanger sequencing, 3 samples were showed positive results in both MASS-PCR and ARMS-PCR. The negative results revealed by Sanger sequencing in these 3 samples might be caused by the false negative. These results demonstrated the higher accuracy and sensitivity of MASS-PCR. The ROC curves also revealed the high sensitivity and specificity of MASS-PCR. Our findings were in line with the work of Zhu et al. (10).

Although we aimed to compare the accuracy and sensitivity of ARMS-PCR and MASS-PCR in both NSCLC and SCLC, only 6 patients were SCLC in our study. Furthermore, the common mutations usually occurred in NSCLC rather than in SCLC. Among the 6 SCLC patients, only 1 SCLC patient was detected to harbor mutation by Sanger sequencing. In the mutation detection of this sample, MASS-PCR assay revealed the same positive result as Sanger sequencing, while, ARMS-PCR assay showed a negative result. This result suggested the higher accuracy and sensitivity of MASS-PCR than ARMS-PCR in the mutation detection of SCLC patients. However, the sample size of SCLC patients was too small, and more SCLC samples must verify our findings further.

In conclusion, we proved that MASS-PCR assay is reliable in the detection of gene mutations with high accuracy, sensitivity, and specificity. Therefore, MASS-PCR could be used in clinical practice to detect gene mutations in lung cancer patients.

First, we are supposed to express our gratitude for the support and suggestion in this study from staffs at molecular diagnosis. Second, we thank the technical support from Shanghai Tongshu Biotechnology Co., Ltd.

Funding: This study was funded by Major R&D projects of the State Ministry of Science and Technology (2016YFC0905402).