Decades ago, Nigro et al. first discovered a new type of circular non-coding RNAs (circRNAs) which were regarded as spliced transcripts of a candidate gene (1). However, most of the researches considered circRNAs as junk RNA due to its characters of Non-function. After decades of further study and the advances in high-through sequencing, circRNAs were regarded as a vital part of non-coding RNAs which specifically expressed in specific tissues (2,3). circRNAs were more stable than the linear mRNAs for their resistance to RNase activity, which distributed mainly in the cytoplasm, but some seemed to be enriched in the nucleus (2).

Clinical studies revealed that circRNAs were closely associated with human diseases, especially cancers including bladder carcinoma (4), esophageal squamous cell carcinoma (5), colorectal cancer (CRC) (6), hepatocellular carcinoma (7) and blood malignancies (8), etc. Moreover, these studies revealed that circRNAs were more abundant in the peripheral blood suggesting that they can serve as new biomarkers cancer diagnosis (9-11). Several circRNAs were discovered abnormally expressed in human colorectal cancer. Wang et al. found that hsa_circ_001988 was decreased in tumor tissues, suggesting that hsa_circ_001988 may be a potential treatment target and biomarker for colorectal cancer. The value of serum exosomes in colorectal cancer was evaluated, indicating that the serum exosome circRNAs level can distinguish CRC from healthy controls (12). The mechanistic study indicated both diagnosis value and mechanical mode of exosome circ-ITCH in human CRC. Downregulation of circ-ITCH in human CRC can inhibit the Wnt/β-catenin pathway by up-regulating ITCH (13).

So far, the functions of CircRNAs can be concluded as below: (I) miRNA sponges, (II) RNA-binding protein (RBP) sponges, (III) regulators of transcription, and (IV) proteins/peptides translation potent (2,3). Among these four functions, miRNA sponge is mostly addressed in previous studies. Using a circRNAs database, circNet (14), we obtained that the regulatory network consisted of circ-STAT3.46-miR-139-5p-IGFR1. Predictively, circ-STAT3.46 have the potential to sponge a bunch of miRNAs including miR-139-5p, miR-374-3p, miR-3617, miR-619-3p and miR-3136-3p. By preliminary screening, we found that only miR-139-5p was significantly correlated with circ-STAT3.46 in human colon cancer. Furthermore, we found that the receptor of IGF1, IGF1R, was overexpressed in human colon cancer. Therefore, in the present study, the potential circ-Stat3.46-miR-139-5p-IGF1R axis was investigated, we try to find out its diagnosis value and tumor promotion mechanism within human colon cancer.

The hospital-based case-control study has consisted of 56 colon cancer patients and 56 cancer-free controls. All the subjects were recruited from the Zhenjiang Hospital of Traditional Chinese Medicine between January 2010 and September 2016. All the patients were enduring surgery treatment for primary colon cancer. This study was approved by the Ethics Review Board of Zhenjiang Hospital of Traditional Chinese Medicine (2017-008), and every patient had written informed consent.

The possible interaction between circ-STAT3.46 and sponge miRNA was predicted by using an online prediction tool, CircNet (http://syslab5.nchu.edu.tw/CircNet/). The information of circRNA was obtained in circRNA (http://www.circrna.org).

The experiment was carried out strictly following the instructions of Total Exosome Isolation Reagent (from serum) (4478360 Invitrogen, CA). One mL of serum sample was mixed with 200 uL exosome isolation reagent, incubate at 4 for 30 min, centrifuge at 10,000 g for 10 min at room temperature, the pallet was dissolved by Trizol for further analysis.

The total RNA was isolated with TRIzol reagent. And the expression of circ-STAT3.46 was detected by using Sybergreen® based real-time PCR. The primers involved in the study were: forward primer: gagactgtaccactgca, reverse primer: ggccaacatggtgaaacgc, amplicon size 127bp for circ-STAT3.46, the primer design for this circ-RNA was presented in supplementary Figure 1A, for detection of internal control gene GAPDH: forward Primer TGTGGGCATCAATGGATTTGG, reverse Primer ACACCATGTATTCCGGGTCAAT, amplicon size 110 bp. The transcription of miR-139-5p was detected by using a commercial Taqman probe (4427975) (ThermoFisher, CA). The miR-139-5p-3p mimic was also purchased from Thermo Fischer (MC11749). 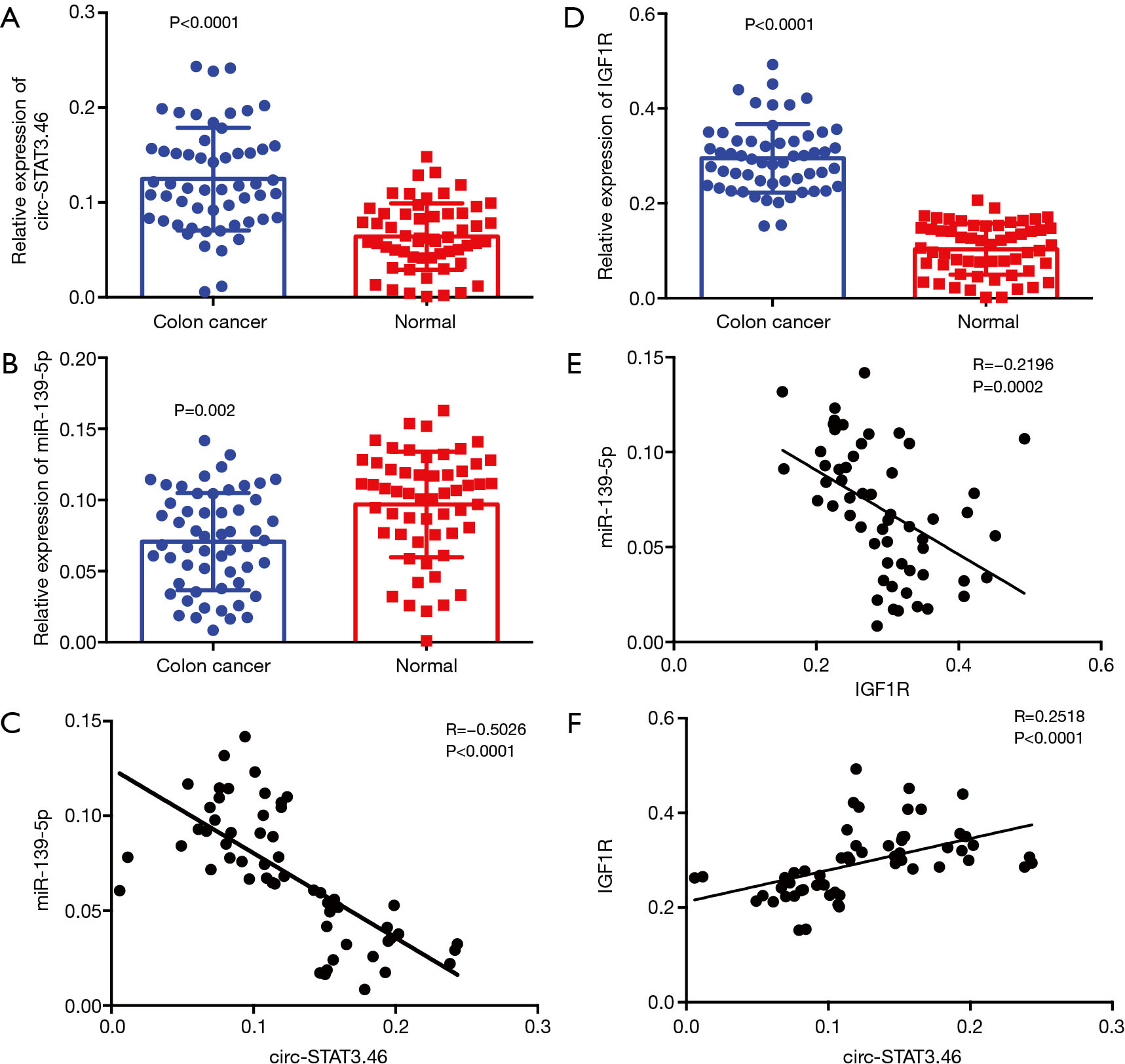 The RNA pull-down assay was performed by using Pierce Magnetic RNA-Protein Pull-Down Kit (Thermofisher, CA) according to the instructions from the manufacturer. Briefly, the total RNA was extracted from HCT-116 cells, after the treatment of RNase in room temperature, magnetic beads were incubated with Probes for biotin-labeled circ-STAT3.46 (Genescript Co., Nanjing, China) (sequence: ccagactccatctcggccaggcatgg) and U6 control (sequence: ttggaacgatacagagaagatt). The relative expression levels of miR-139-5p, circ-STAT3.46 and U6 in the extract were detected by RT-PCR.

Tissue sections were following a deparaffinized and rehydrated process, and then block endogenous peroxidase activity by being treated with 3% H2O2 in methanol for 30 min to. Tissue sections were then rinsed twice for five minutes in phosphate-buffered saline (PBS) and blocked with 10% normal goat serum. After resin, the samples were incubated with a primary anti-STAT3 (Y705) (#9131, Cell signaling, MA) at 4 °C overnight. Sections were incubated with secondary antibodies and stained with DAB according to the manufacturer’s protocol, mounted on slides, and photographed using a digital microscope camera (Nikon, Tokyo, Japan).

The 3'UTR region of IGF1R containing the wild-type or mutant potential target site for miR-139-5p were designed and synthesized in Genescript Co. (Nanjing, China) and inserted into the a pGL4 vector (Promega, WI). For luciferase assay, Hct-116 and Hct-15 were co-transfected with pGL4-IGF1R-WT 3'UTR or pGL4-IGF1R-MU 3'UTR, with miR-139-5p mimics or control (GenePharma, China) using Lipofectamine 2000 (Thermofisher, CA). Cells were harvested 48 h after transfection for luciferase assay using a Dual-Luciferase® Reporter Assay System (Promega, WI) according to the manufacturer’s protocol.

Data are presented as mean ± SD. The statistical differences in demographic and clinical characteristics were evaluated by using χ2 tests and the Student’s t-test analysis. The two values correlations were assessed by linear correlation analysis and followed by F-test. The overall survival rates in different groups were analyzed by using Kaplan-Meier curve. All the expression experiments we conducted in vitro were repeated at least three times with samples in triplicates. Statistical analysis was performed using the GraphPad Prism software. In all cases, P<0.05 was considered statistically significant.

We found that has-circ-STAT3.46 is located in 17q21.2, the position is chr17:40498586-40500557, it is also nominated as hsa_circ_0043817. After getting its full length (296 bp) the primers detecting its expression and the probes for RNA pull-down assay were designed (Figure S1A). The regulatory potential of circ-STAT3.46 was predicted by using the on-line tool, CircNet. We found that circ-STAT3.46 has the potential to sponge a serial of miRNAs including miR-139-5p, miR-374-3p, miR-3617, miR-619-3p and miR-3136-3p (Figure S1B). After screening, we found that only miR-139-5p was decreased in human colon cancer tissues, while others were not. Moreover, we found that miR-139-5p have several potentially regulatory targets including PDZD8, ABARAP, STAMBP, UHMK, and IGFR1 (Figure S1C). Since several studies have already reported that IGF1/IGF1R is a STAT3 activator, we proposed that overexpression of circ-STAT3.46 might be another explanation of STAT3 activation in human malignancies. Thus, we attended to pick circ-STAT3.46-miR-139-5p-IGF1R as a potential regulatory axis in human colon cancer for further investigation. 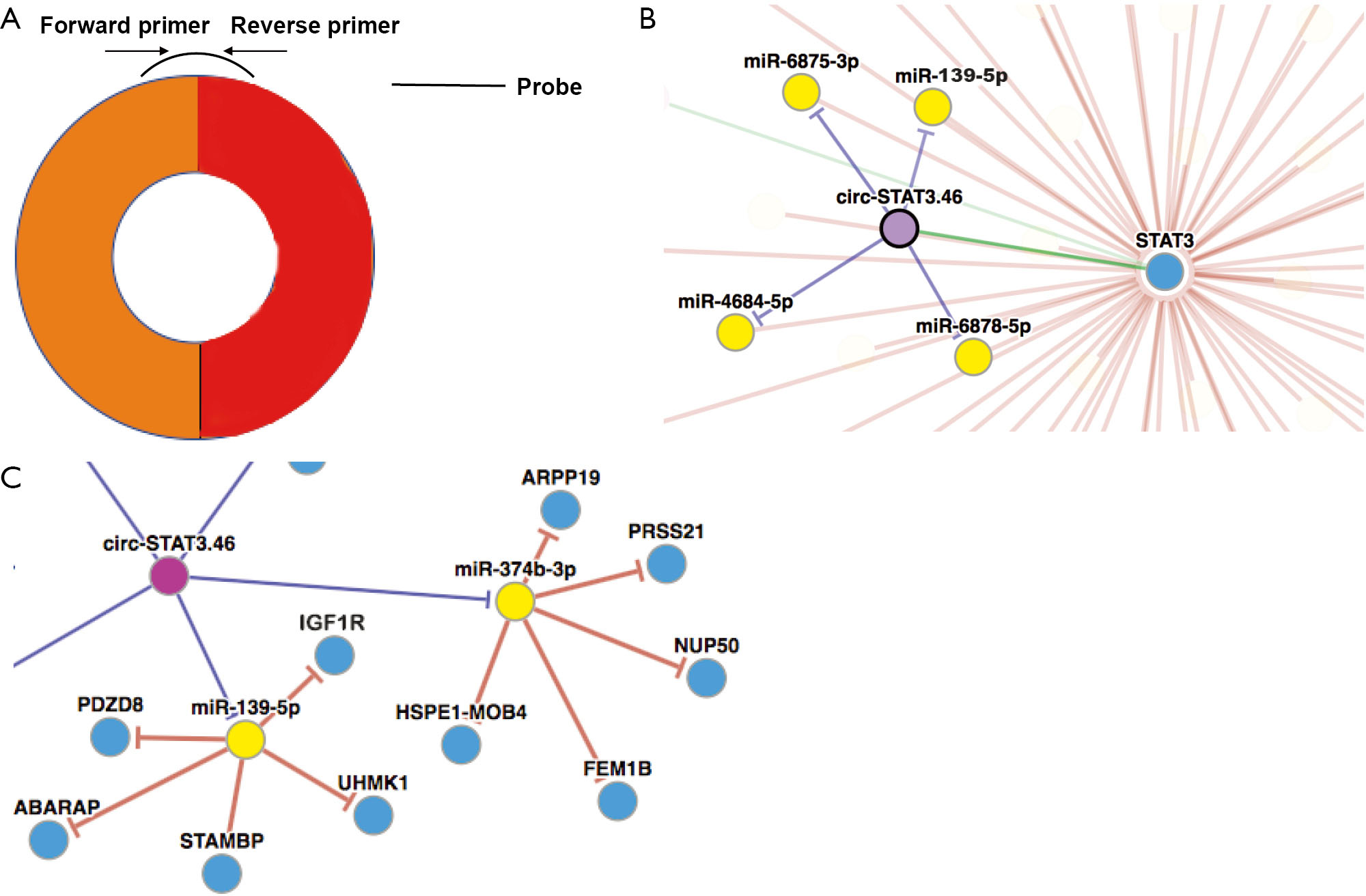 Figure S1 Primers and probe designation diagram for circ-STAT3.46 (A). Prediction of potential sponged miRNA and target genes by circ-STAT3.46 from circNet (http://syslab5.nchu.edu.tw/CircNet/) (B and C) .

Overexpression of circ-STAT3.46 was associated with downregulation of miR-139-5p in human colon cancer tissues

Serum Circ-STAT3.46 was associated with metastasis and served as a poor prognosis of colon cancer patients 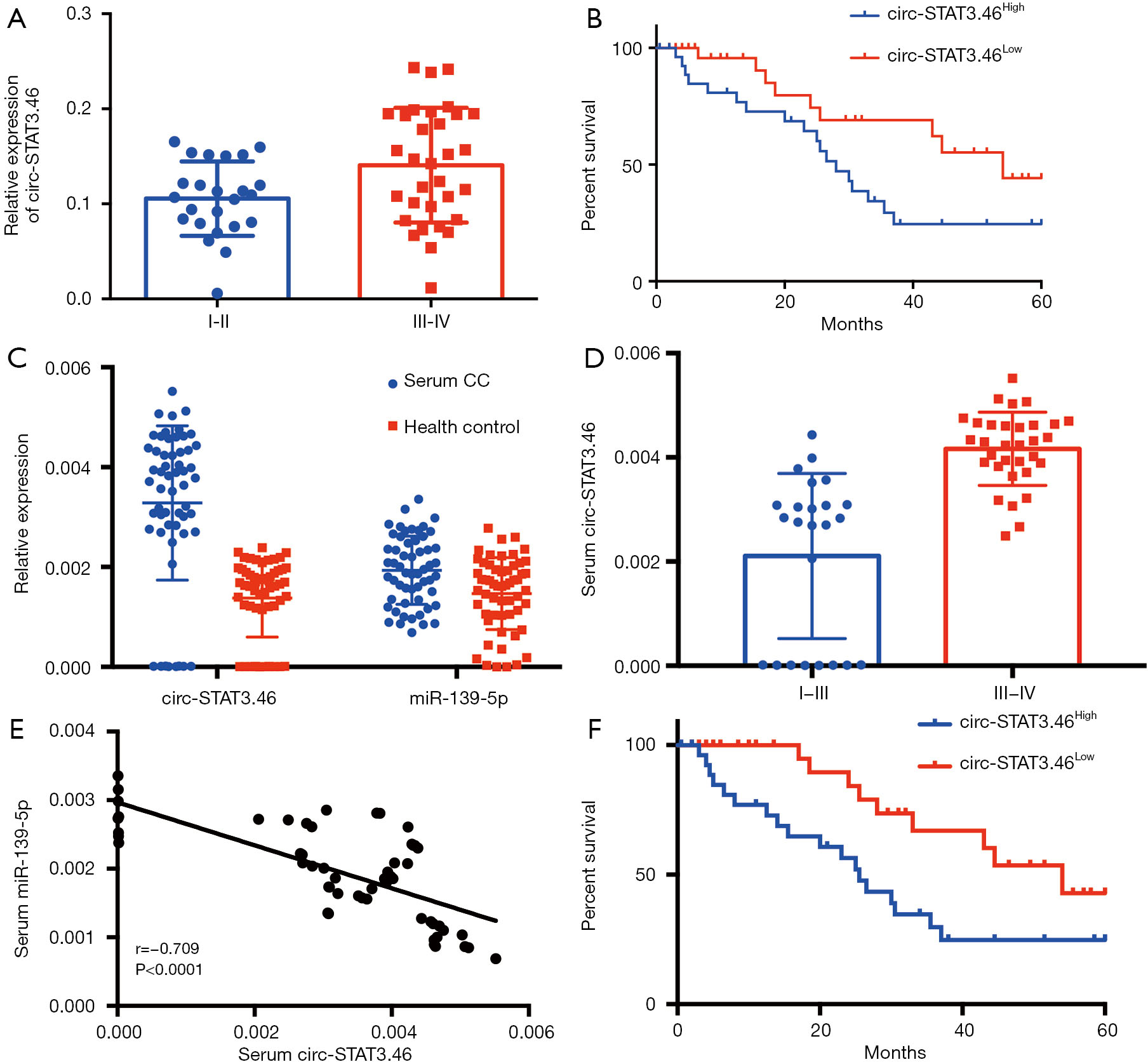 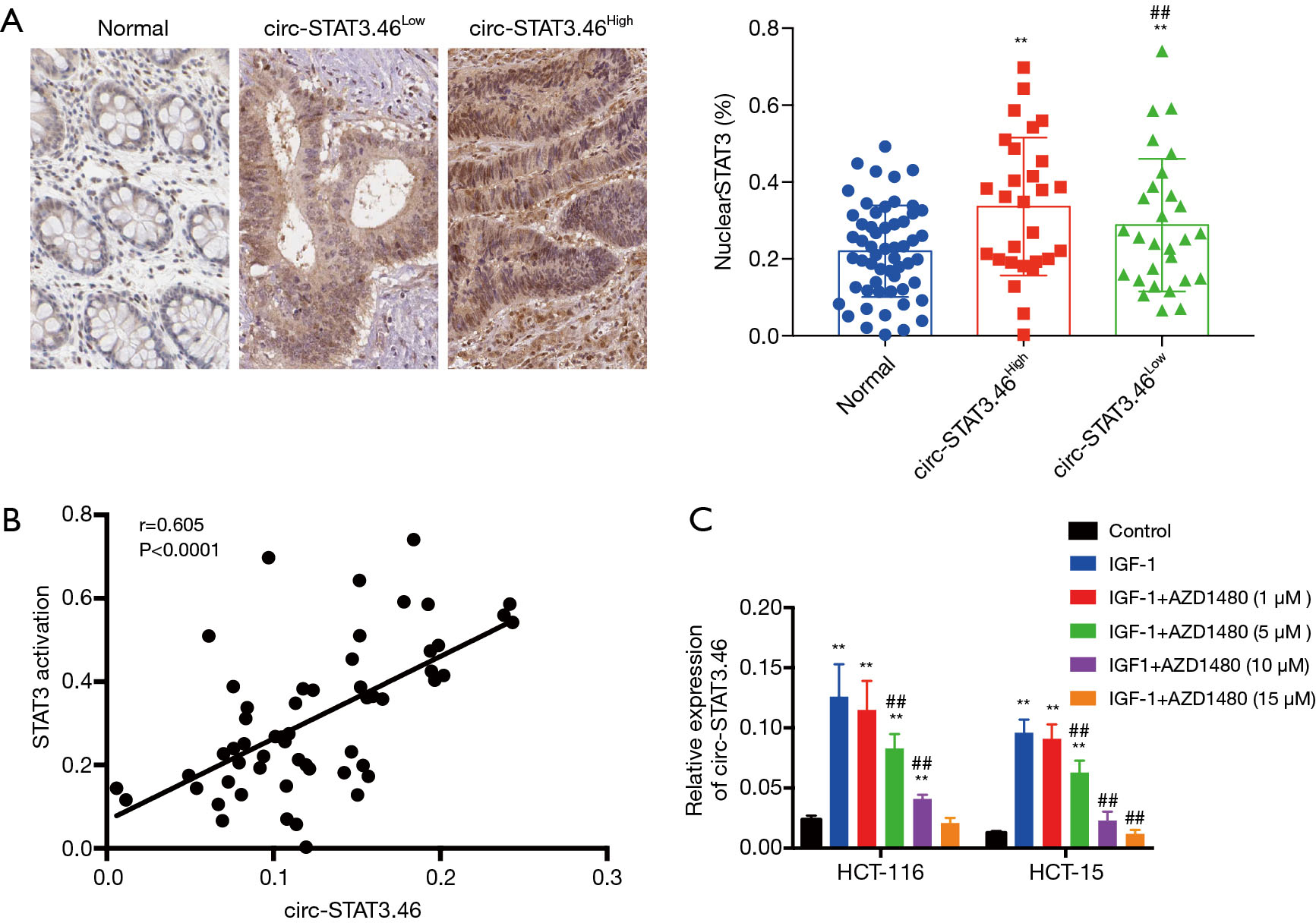 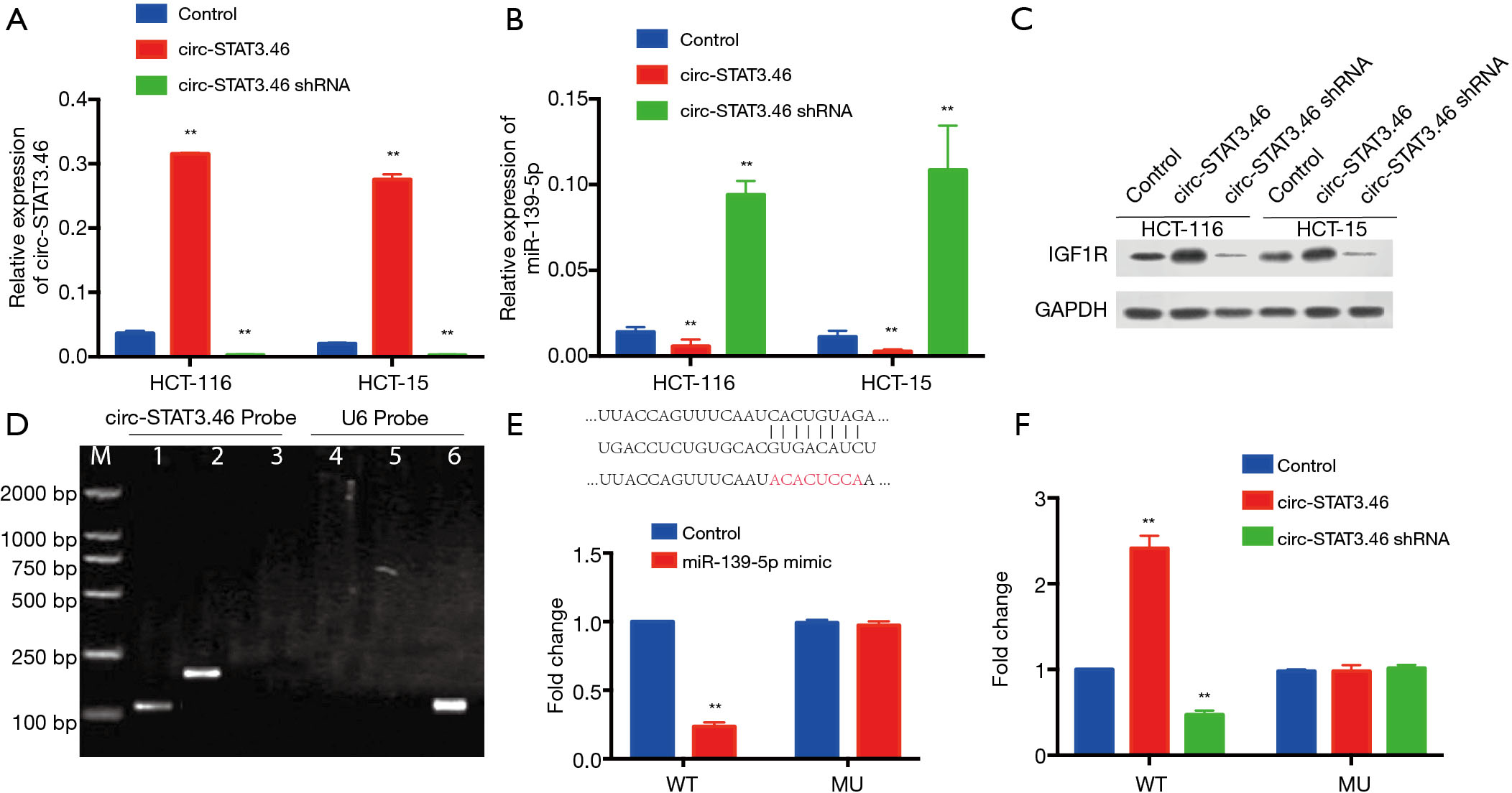 In summary, the axis of circ-Stat3.46-miR-139-5p-IGF1R was existed in human colon cancer, and STAT3 regulated circ-STAT3.46 might enhance the expression of IGF1R by sponging miR-139-5p.

Insulin-like growth factor 1 (IGF-1) is a hormone which structurally similar to insulin (15). Physiologically, it played an essential role in body growth which primarily produced in the liver (15). Pathologically, increased expression of IGF-1 was discovered in many human malignancies, IGF1R is the receptor of IGF1, IGF1/IGF1R mediated signaling controls many biological processes of tumor, such as proliferation and metastasis (15). These effects were regulated by its down-stream signaling including wnt/β-Catenin, PI3K/AKT, MAPK, and STAT3 signaling (16,17). In the present study, we found that circ-STAT3.46 transcription can be enhanced by IGF1/IGF1R/STAT3 signaling, specifically inhibit JAK2/STAT3(Y705) activation can effectively block the transcription of circ-STAT3.46. We suspected that high expression of circ-STAT3.46 in colon cancer was a protective mechanism which can guarantee the IGF1/IGF1R dependent STAT3 activation. Our results indicated that circ-STAT3.46 could bind to miR-139-5p, thus to maintain the high expression level of IGF1R, which can response for the exogenous IGF-1 stimulation.

miR-139-5p was usually reported as a tumor suppressor which was first characterized in neurodegeneration (18). Subsequently, miR-139-5p was identified to be responsible for cancer diagnosis, prognosis, and therapy (19). Several targets of miR-139-5p have been discovered, its characteristic is contradictory, due to its regulation on sets of cell proliferation and apoptosis-related genes (20). One of these researches revealed that miR-139-5p inhibited cell proliferation and invasion by targeting IGF1R in human non-small cell lung cancer (21). Maoa et al. reported that in miR-139-5p inhibited the crosstalk between PI3K/AKT and Wnt pathway mediated by IGF-1R in HCT-116 cells (22). In our study, we provided both clinical and experimental proofs for the miR-139-5p regulation on IGF1R. And furthermore, we discovered one of the reasons of downregulation of miR-139-5p. The overexpression of circ-STAT3.46 can sponge miR-139-5p by direct binding.

We also explored the value of serum circ-STAT3.46 and miR-139-5p as biomarkers in prediction different TMN stages and prognosis of colon cancer patients. As it has been introduced previously, compared to common linear mRNAs, miRNA and circRNA are steadier and more RNase resistant (2,3). Many researches indicated that they were secreted and detected in peripheral blood. Based on the detection of serum circ-STAT3.46 and miR-139-5p, we can quickly evaluate the expression level of IGF1R as well as the activation of STAT3 signaling within the colon cancer tissues. Many other groups have developed circulating miRNA diagnosis system for many human malignancies, including colon cancer, hepatocellular carcinoma, Non-small cell lung cancer, prostate cancer, etc. (9-11). Concerning circRNA, the use of circRNA as biomarkers has emerged to be one of the main approaches for diagnosis and prognosis of cancers. circRNA meet the essential features to be a qualified biomarker such as stability, sensitivity, specificity, accuracy and reproducibility. Tang et al. found that circ-KIAA1244 was lower expressed in human gastric cancer tissues, plasmas, and the result also demonstrated that a decreased expression of circ-KIAA1244 in plasmas exosome was negatively correlated with TNM stage and metastasis, and a bad prognosis of GC patients (23). The report concerning the roles of circulating circRNA in human colon cancer is relatively rare, therefore, we reported the diagnosis value of circulating circ-STAT3.46 in human colon cancer for the very first time.

Conclusively, we explored an axis consisted of circ-Stat3.46-miR-139-5p-IGF1R, which was closely related to cell proliferation initiated by STAT3 activation. Moreover, the serum circ-STAT3.46 and miR-139-5p can serve as potential biomarkers for colon cancer diagnosis.

Funding: This work was supported by grants from Jiangsu Province TCM science and technology development plan (ZD201911 to Y Shi, and YB201977 to X Chen).

Ethical Statement: The authors are accountable for all aspects of the work in ensuring that questions related to the accuracy or integrity of any part of the work are appropriately investigated and resolved. This study was approved by the Ethics Review Board of Zhenjiang Hospital of Traditional Chinese Medicine (2017-008), and every patient had written informed consent.