Prognostic factors, treatment, and outcomes in combined small cell lung cancer: a SEER survey from 2004 to 2015

Recent studies have reported that C-SCLC accounts for 5% to 61% of all SCLC cases, and there is a non-homogenous survival difference between pure SCLC and C-SCLC groups (1-3). In those earlier small-sample retrospective studies, the differences in these results may be attributed to the type of specimens used, and different population groups. Furthermore, other studies have shown that C-SCLC and pure SCLC have similar general characteristics of (3,4). However, mixed-component NSCLC has been shown to have divergent genotypes compared with pure SCLC and to influence the prognosis (3,5-7). To date, the prognostic factors of C-SCLC remain unclear.

The multidisciplinary treatment for C-SCLC is conducted according to the clinical practice SCLC guidelines. Further research on the optimized treatment modalities for C-SCLC is still necessary. Therefore, we aimed to report on a sample with a larger population, based on the data from the Surveillance, Epidemiology, and End Results (SEER) database [2004–2015]. We present the following article in accordance with the STROBE reporting checklist (available at http://dx.doi.org/10.21037/tcr-20-968).

The SEER database of the National Cancer Institute (NCI) covers 34.6% of the US population. In this study, the SEER-18 registry (with custom treatment fields) was explored using the official software, version 8.3.5. The data from patients with C-SCLC between the dates of 2004 and 2015 were extracted. C-SCLC was defined by the site recode ICD-O-3/WHO 2008 of the “lung and bronchus,” and histologic type codes 8045. The 8th edition of the TNM classification was used. The exclusion criteria were: (I) unknown survival time; (II) cases without a positive pathological diagnosis; or (III) multiple primary cancers.

The following information was extracted: age at diagnosis, race, sex, TNM stages, tumor size and extension, primary site, grade, surgery, radiotherapy or chemotherapy, survival, vital status, and the cause-specific death classification. We obtained internet access to the SEER database with the reference number 12025-Nov2017. As this study used a national dataset of deidentified patient information, it did not need to be approved by the institutional review board of the General Hospital of Northern Theater Command. The data of this observational study was anonymous; therefore, the requirement for informed consent was waived.

Continuous variables were reported as mean ± SD, and the categorical variables were reported as n (%). Incidence rates per 100,000 age-adjusted to the 2000 US standard population and the annual percent change (APC) were calculated from 2004 to 2015 using SEER*Stat. Survival rates were analyzed using the Kaplan-Meier method and the log-rank test. The Cox regression model was used to identify the relevant variables and treatment modalities which affected the overall survival (OS) and cancer-specific survival (CSS). A two-sided P value <0.05 was considered statistically significant. Statistical analyses were performed using the SPSS software version 23.0 (SPSS Inc. Chicago, IL, USA), and the scatter diagrams were drawn using the GraphPad Prism 5.01 (GraphPad Software, San Diego, CA, USA). 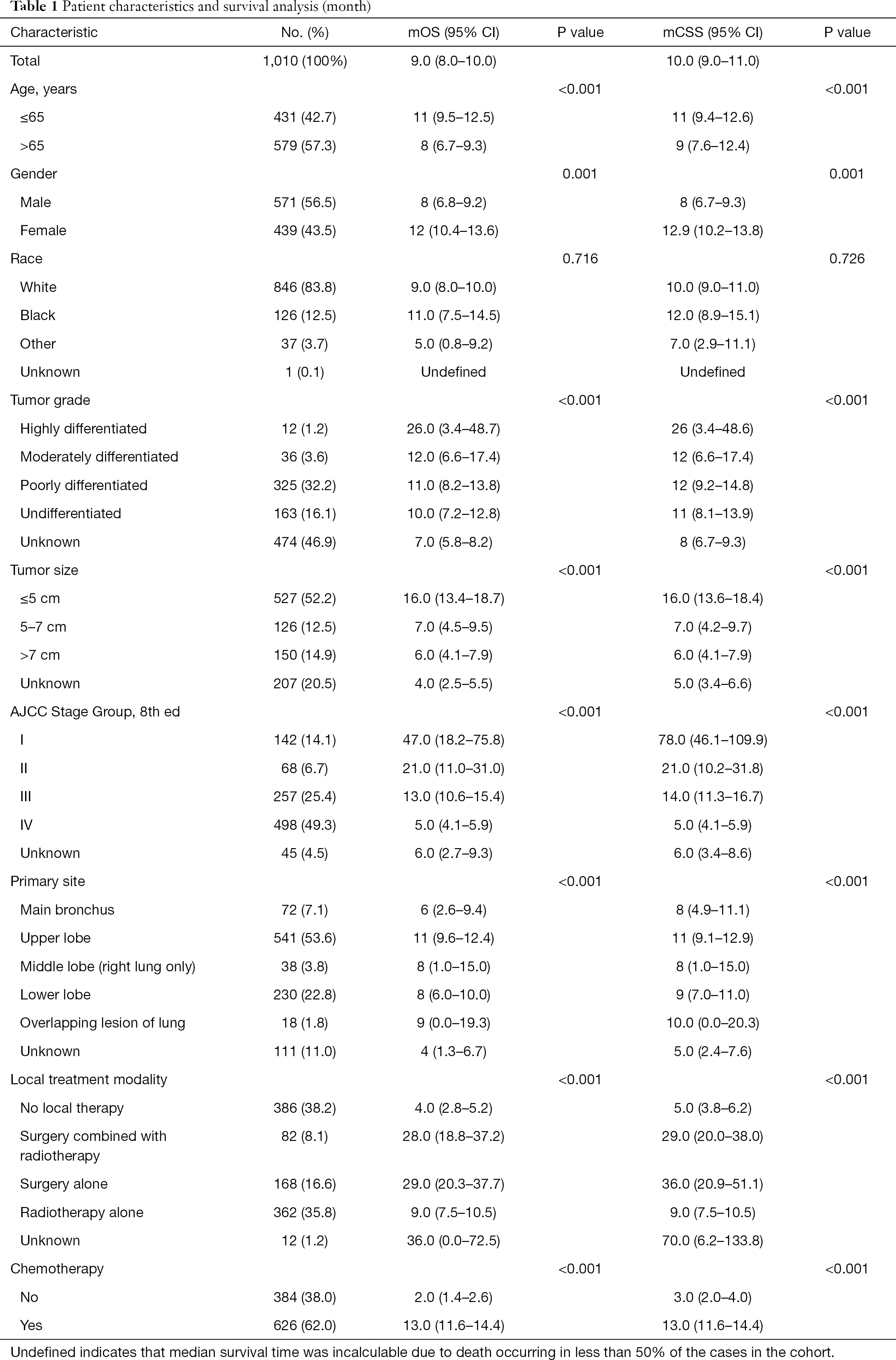 Kaplan-Meier analysis revealed that the median OS and median CSS for the entire cohort were 9 and 10 months, respectively. A younger age, being female, an early stage, and tumors that were highly differentiated, smaller than 5 cm, or located in the upper lobe, were independent prognostic factors of C-SCLC; however, race did not correlate with OS and CSS (Figure 2, Table 1). 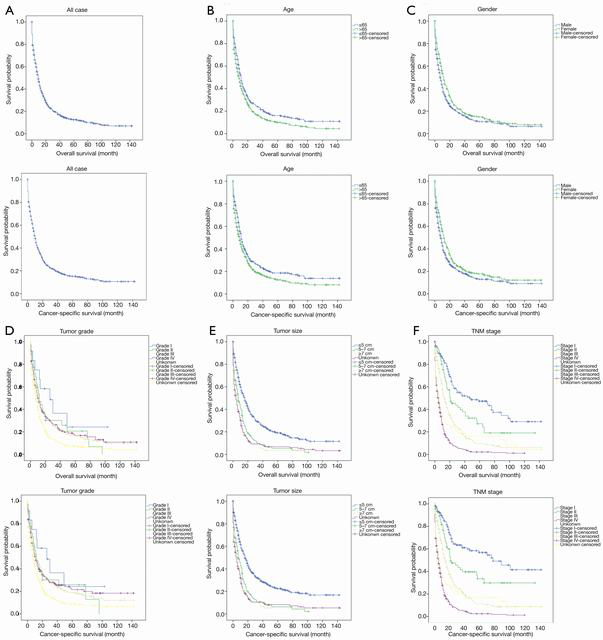 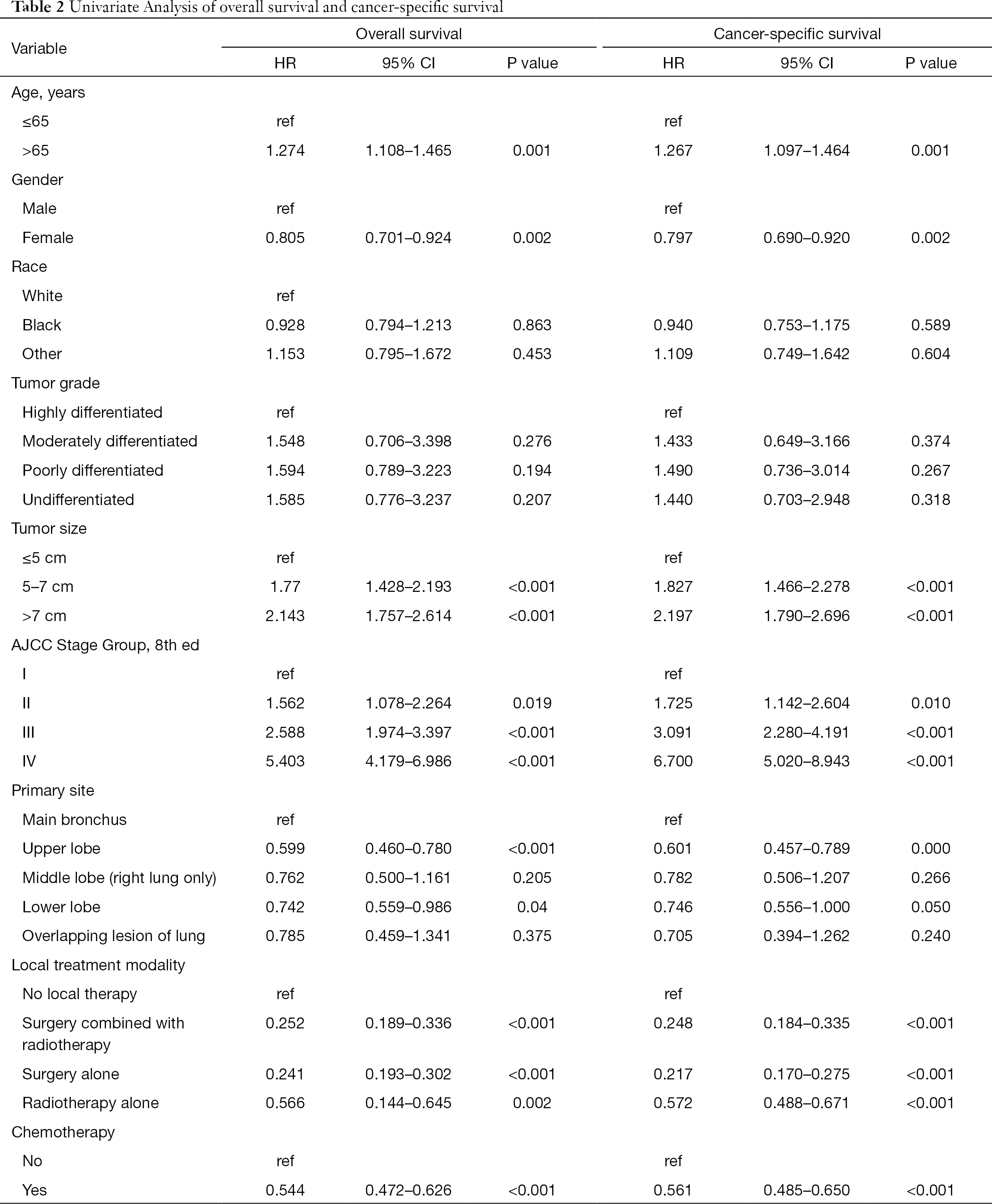 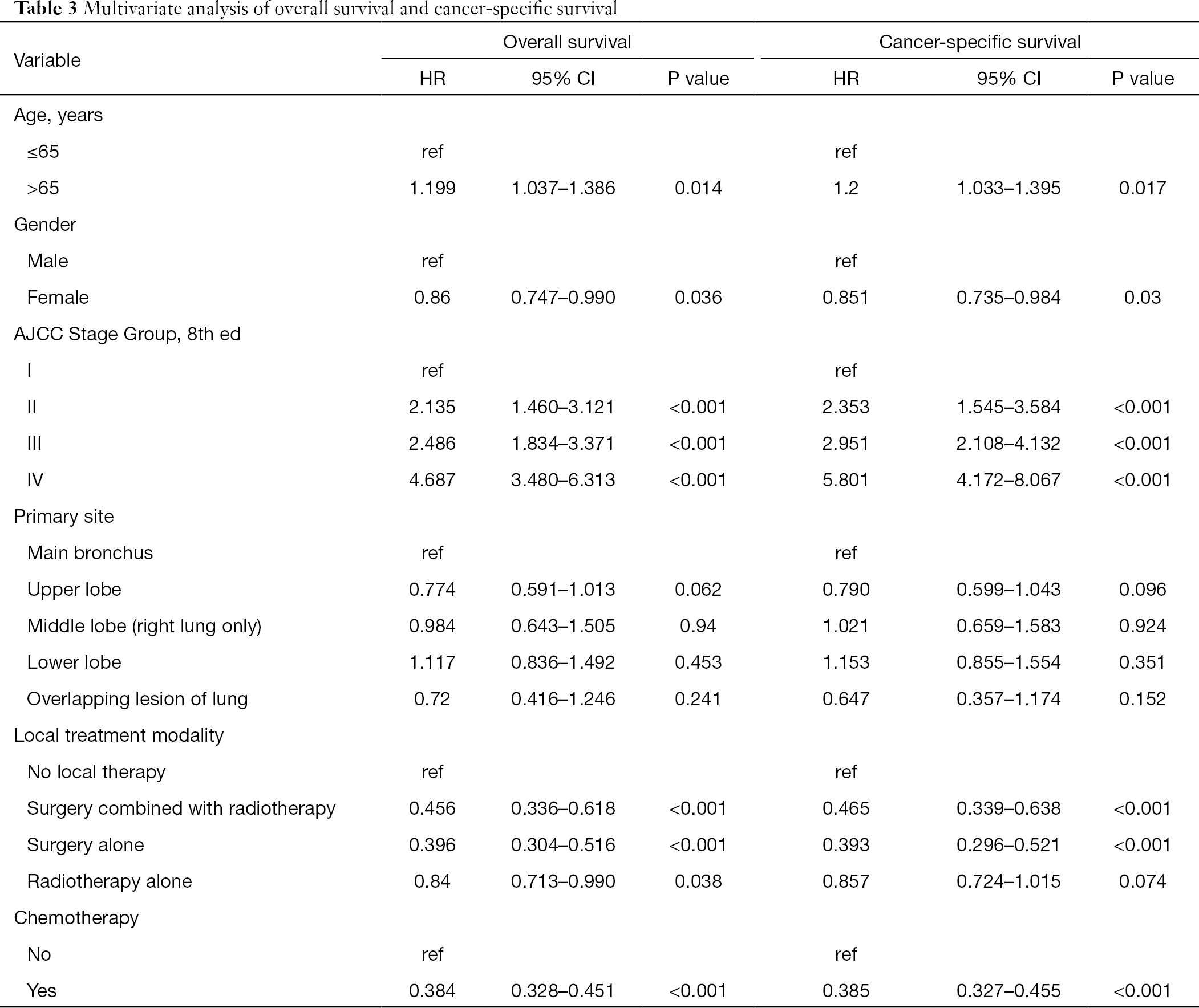 Kaplan-Meier survival analyses and Cox proportional hazard analyses were conducted to evaluate the effect of therapy modalities on the TNM stage related-survival (Tables 4,5). Multivariate analyses were then further adjusted by age, sex, local treatment modality, and chemotherapy. For stage I patients, surgery alone was the most common local therapy modality (65.5%), and it was the only local therapy modality that had significantly improved the OS (HR, 0.371; 95% CI, 0.180–0.769; P=0.008) and CSS (HR, 0.367; 95% CI, 0.162–0.892; P=0.016). Nearly half of the stage I patients (47.9%) underwent chemotherapy, but the multivariate analysis revealed that it was not an independent prognostic factor. 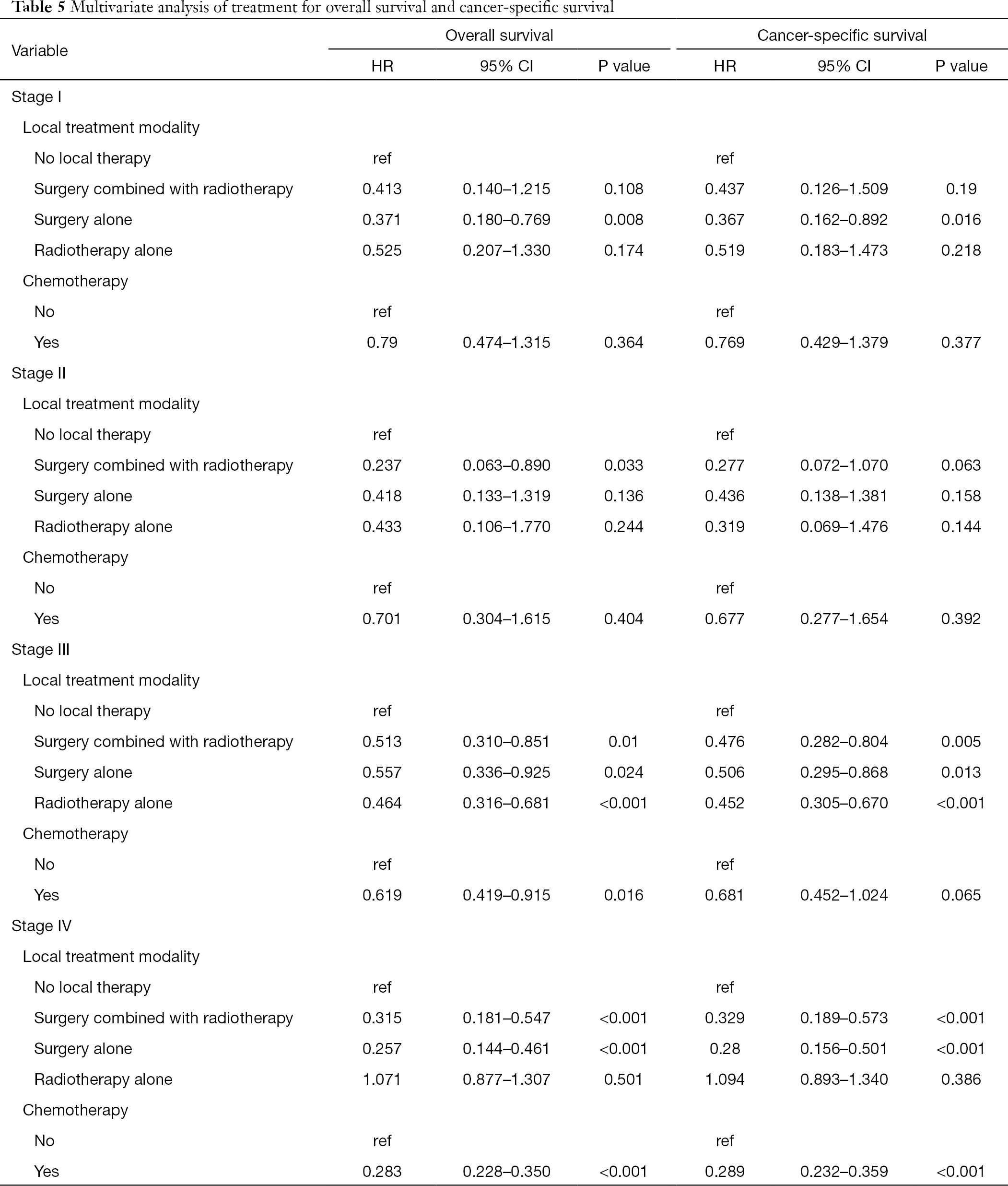 In this cohort, 19 (27.9%) patients with stage II underwent surgery combined with radiotherapy. Multivariate analyses showed that surgery combined with radiotherapy significantly improved the OS (HR, 0.237; 95% CI 0.063–0.890; P=0.033) but not CSS. Most patients (72.1%) underwent chemotherapy, but the multivariate analysis revealed that it was not an independent prognostic factor.

Many scientists have devoted time and effort to understanding the mechanisms and histogenesis of C-SCLC (9-11). Zhao et al. recently reported on a next generation sequencing (NGS) technique; they identified that the histologic components of C-SCLC had an overall consistency and only partial differences (3). Asahina et al. described a case of C-SCLC with squamous-like component (SLC), and spindle cell carcinomas (SpCC) components. In the study, it was demonstrated that by analyzing histological, immunohistochemical, and loss of heterozygosity (LOH) events, it was determined that the components of a non-small cell carcinoma were not differentiated from a small cell carcinoma (12); however, further studies are still needed.

Earlier studies found there to be some similar prognostic factors for C-SCLC patients. A retrospective review of 97 individuals with resected C-SCLC identified that sex, age, ECOG PS, NSCLC components, adjuvant therapy were significant prognostic factors that influenced the OS (1). Another study of 114 patients with resected C-SCLC showed that smoking, advanced TNM stage, positive resection margin, and lymph node metastasis >10% were poor prognostic factors (4). Our multivariate analysis also confirmed that sex, age, and stage were independent prognostic factors. The main difference was that the previous studies above only focused on postoperative C-SCLC, while our study included patients of any stage who had and had not undergone surgery. Additionally, we also analyzed surgery combined with radiotherapy and surgery alone as local therapy modalities. We found that they had significantly improved the OS and CSS, and radiotherapy alone significantly improved the OS, but not the CSS. Chemotherapy was found as a significant prognostic factor for determining OS and CSS. As a result, multidisciplinary treatment was recommended to improve the prognosis. Other studies also showed that neutrophile-lymphocyte ratio (NLR) and C-reactive protein (CRP) amounts were associated with prognosis in C-SCLC (13-15). These results could be applied to clinical management as a reference and are deserving of further study.

By using the TNM staging system, clinicians can identify patients who may benefit from surgery. Surgical treatment was recommended only for SCLC patients with a T1–2N0M0 stage according to the NCCN guidelines (16). However, in our present study, surgery was identified as a critical factor in improving the prognosis of individuals with C-SCLC, especially for stage I patients, most of whom had undergone surgery. Furthermore, surgery alone or surgery combined with radiotherapy was important local therapy for patients with stage II and III. Survival time was significantly longer in the surgery group than in the non-surgery group, even for stage IV patients. Although the proportion of patients suitable for surgery was small, choosing the right patients for surgery could improve the prognosis.

Earlier studies mostly focused on surgery in patients with early stage C-SCLC. In their retrospective study, Babakoohi et al. reported that the OS of C-SCLC was longer than pure SCLC in the surgery group (15 vs. 10.8 months); however, there was no difference in the non-surgery group (17). Men et al. found that for C-SCLC, the 5-year OS rate in the surgery group was higher than in the non-surgery group (48.9% vs. 36.6%) (4). Therefore, surgery might be more significant for C-SCLC patients compared with SCLC patients. The surgical indication for C-SCLC should be broader than pure-SCLC. It will be interesting for future studies to investigate patients who would be suitable for surgery.

Our data showed that chemotherapy was widely used in patients with C-SCLC. However, chemotherapy was only an independent predictor of an improved survival in patients with stage III and IV. Men et al. reported that even though nearly 84% of C-SCLC patients received chemotherapy, there were no significant differences in the 5-year survival rates between the chemotherapy group and the non-chemotherapy groups (37.7%, 35.4%) (4). Previous studies also found that the response rate of chemotherapy regimens for pure SCLC was lower when it was applied in the treatment of C-SCLC (15). These findings equally indicated a challenge for chemotherapy in the treatment of C-SCLC. Thus, the difficulty stems from optimizing the indications in the clinical practice and determining the regimens and combined treatment modalities for the administration of chemotherapy in C-SCLC.

To our knowledge, this is the first large-sample retrospective study to summarize the clinical characteristics, prognosis, and treatment of C-SCLC. However, there were several limitations to this study. Firstly, it is retrospective; as a result, there are inevitable selection biases, information biases, and confounding biases. Secondly, the study did not include all possible prognostic factors for analysis, especially the newly discovered factors, such as NLR, CRP, and NSCLC components, due to the characteristics of the database. Finally, as this study analyzed data from over 12 years, changes in diagnostic and therapeutic techniques during this timeframe may affect the reliability of conclusions.

In summary, our study proved that the significant independent determinants of an improved survival rate included being younger than 65 years, female, and having an earlier stage at presentation. Surgery may significantly improve the survival outcomes of patients with any stage of C-SCLC. Surgery combined with radiotherapy is associated with an increased OS in patients with stage II, and radiotherapy alone is associated with an increased OS and DSS in patients with stage III. Chemotherapy is only an independent predictor for the survival of patients with stages III and IV. These findings may help to determine the treatments used and further research on this rare disease.

Reporting Checklist: The authors have completed the STROBE reporting checklist. Available at http://dx.doi.org/10.21037/tcr-20-968

Data Availability: The datasets used and/or analyzed during the current study are available from the corresponding author on reasonable request.

Conflicts of Interest: All authors have completed the ICMJE uniform disclosure form (available at http://dx.doi.org/10.21037/tcr-20-968). The authors have no conflicts of interest to declare.