Despite the advancement of surgical techniques and support from perioperative monitoring, perioperative mortality after PD has become a rare event with mortality rates below 5% (1,2). However, the post-PD morbidity rate remains high (38–44%) (2-4), and in recent decades, this situation has not improved. In addition, it is much higher than the incidence of postoperative complications in other gastrointestinal cancer surgery (5-7). In order to reduce the potential for complications following PD to develop, surgeons have proposed various surgical techniques; however, they cannot eliminate the possibility of complications. On the other hand, patients who suffered from one complication have a risk of subsequent complications, which indicates higher medical costs, a longer hospital stay, and severe impact on their health. These negative results of postoperative complications indicate the importance of calculating patient risk factors for better understanding of prevention strategies and early intervention.

Although the risk factors of complication following PD have been identified (8,9), few studies have established a scoring system. Moreover, the POSSUM scoring system is used to estimate general surgery and does not factor in issues specific to PD surgery. Moreover, most of their reports are based at a single institution, so it may not be possible to replicate these results at other institutions, and various biases should be taken into account when these results involve individual institutions or patients. To predict morbidity rate after PD and thus minimize it, we analyzed all variables and modified POSSUM score system to specific to PD surgery, which we call PD-POSSUM. Our findings provide a scientific basis for managing and preventing post-PD complications. We present the following article in accordance with the STROBE reporting checklist (available at http://dx.doi.org/10.21037/tcr-20-828).

The research conformed to the Declaration of Helsinki (as revised in 2013) and it was authorized by the Human Ethics and Research Ethics Committees of the Fourth Hospital of Hebei Medical University (ID: 2016MEC078). The informed consent was approved by all that participates.

A total of 201 patients underwent PD during January 2016 to December 2018 for periampullary diseases at the No.4 Hospital of Hebei Medical University in Shijiazhuang City, China. In addition, we defined all 201 cases as our modeling group. 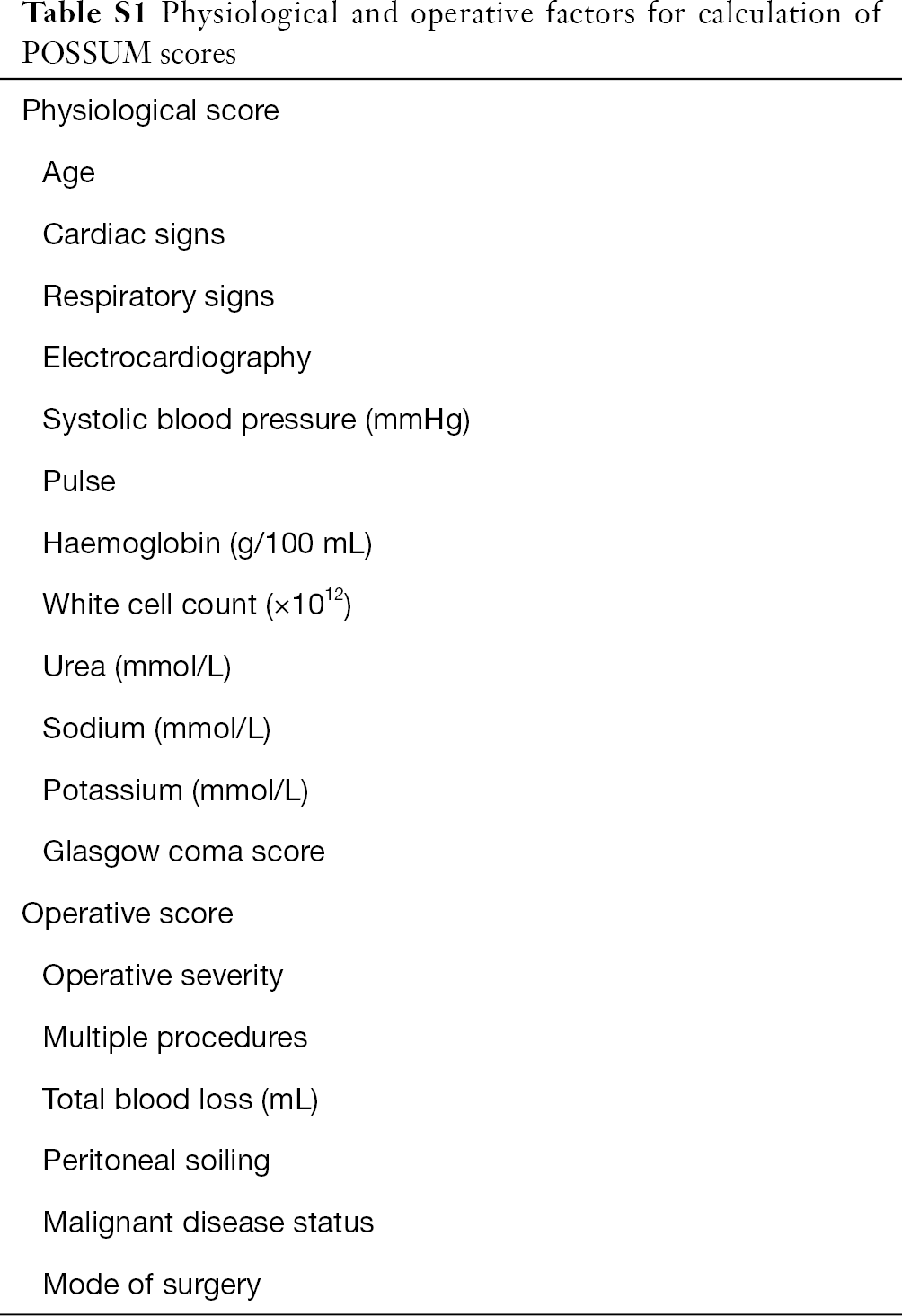 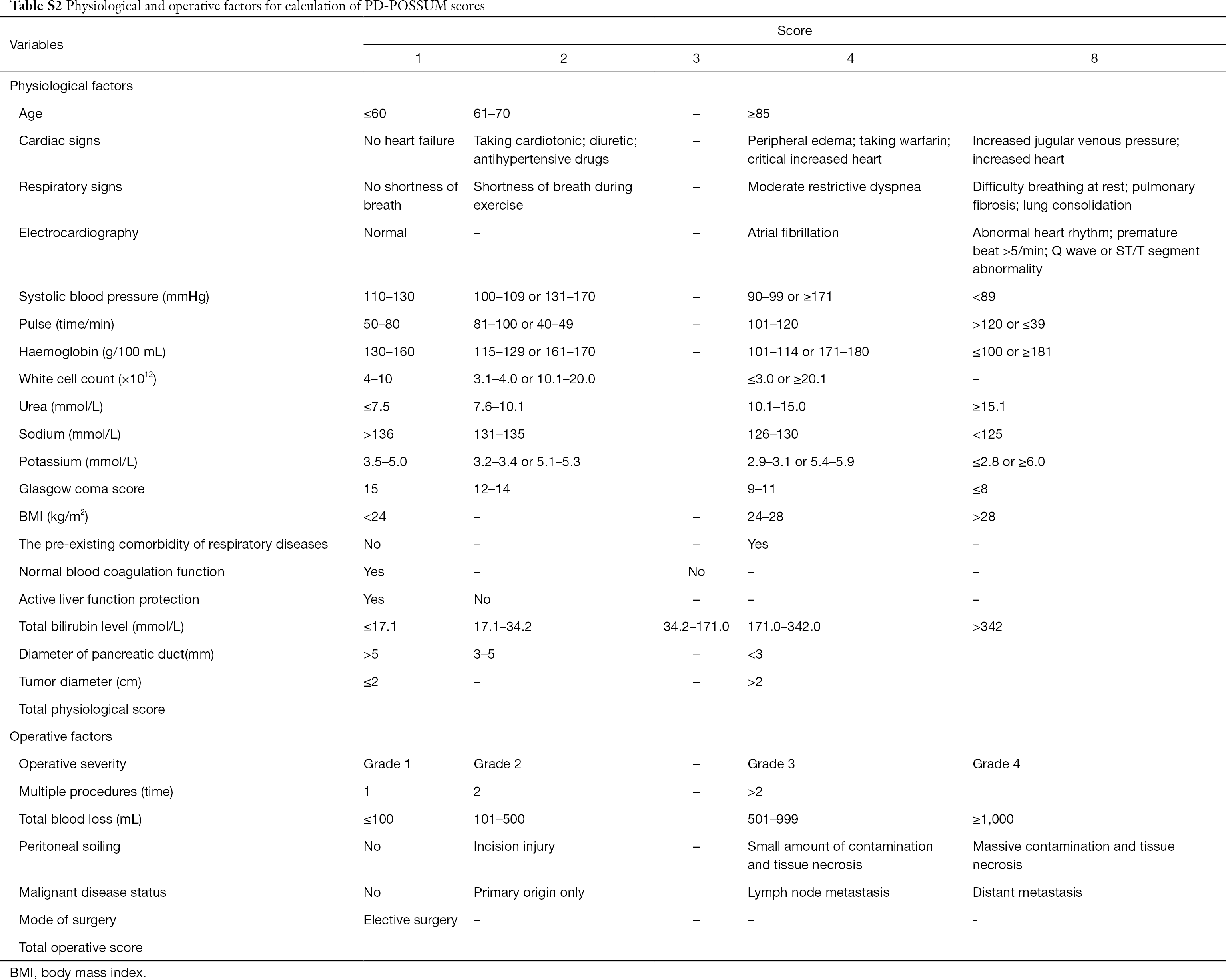 The results are expressed as percentages and sample size (Table 1). For correlation analysis, the Spearman rho test was used for comparing pre- and intra-operative variables (Table 2). All test results were then entered into a multivariable linear regression model for identifying independently predictive factors of the complication (Table 3). Risk factors were entered into the same model. The complication values ​​were then converted to natural log equivalents for statistical analysis. The variance expansion factor was calculated by a multiple linear regression model to quantify the severity of multicollinearity. Multiple logistic regression analyses (backward) were performed to calculate the odds ratio (OR) for each variable in the subject of the complication based on the criteria for complications (Table 4). At the end of this study, logistic regression analysis was performed to explore the connection between scorePD-POSSUM (see below) and morbidity rate (Table 5). A receiver operating characteristic (ROC) curve analysis was performed to determine the ability of scorePD-POSSUM to predict complications (Figure 1). 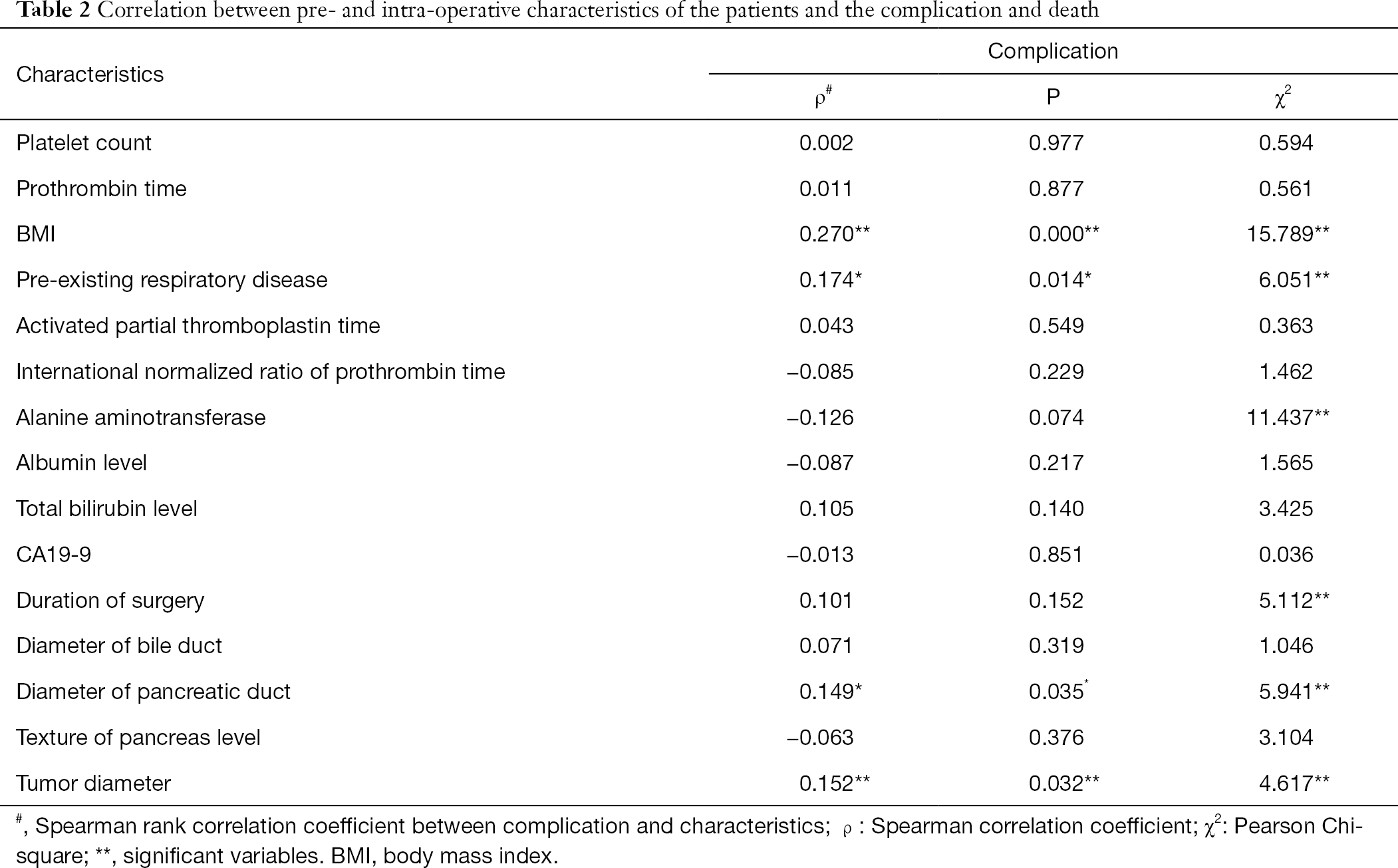 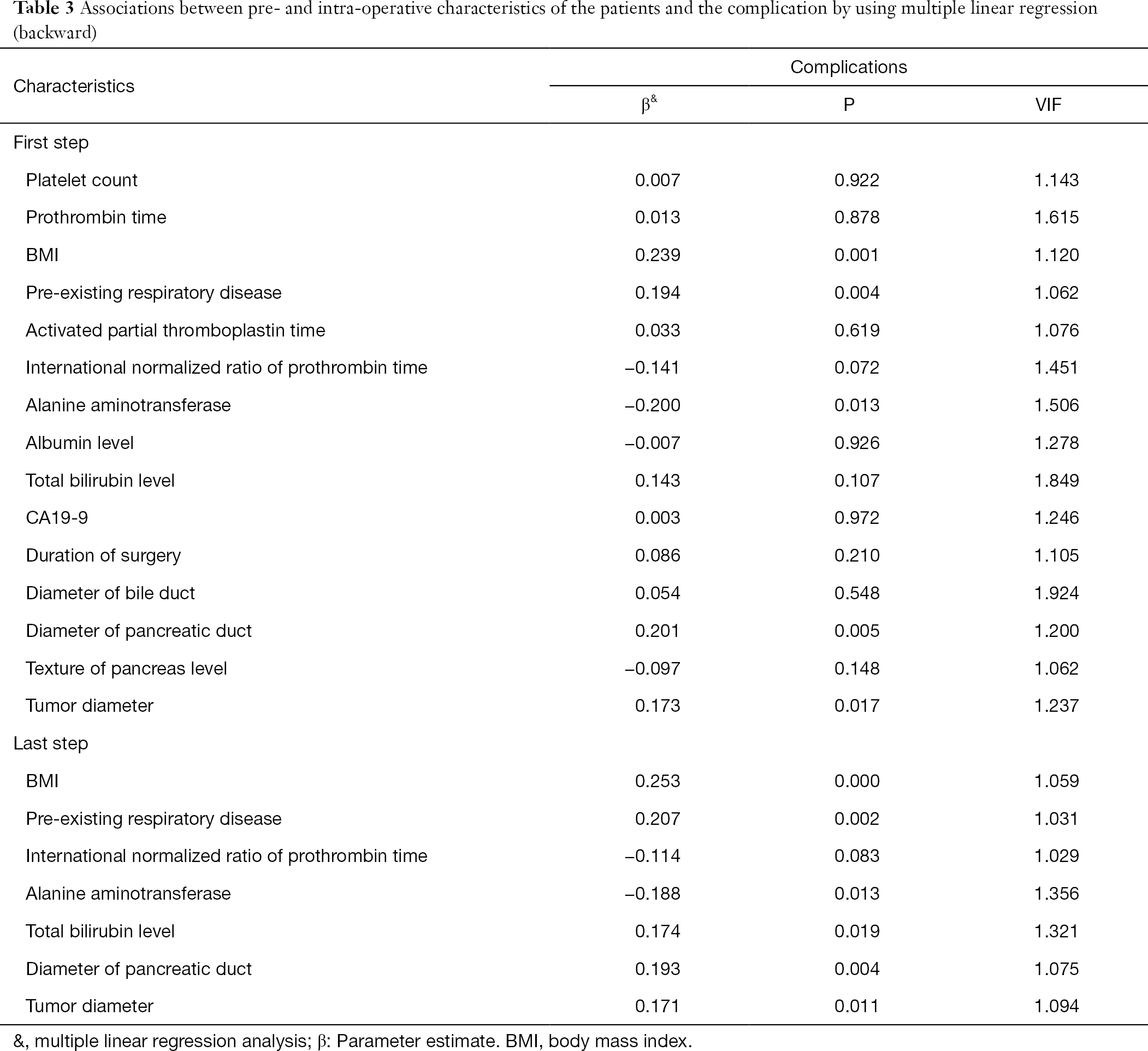 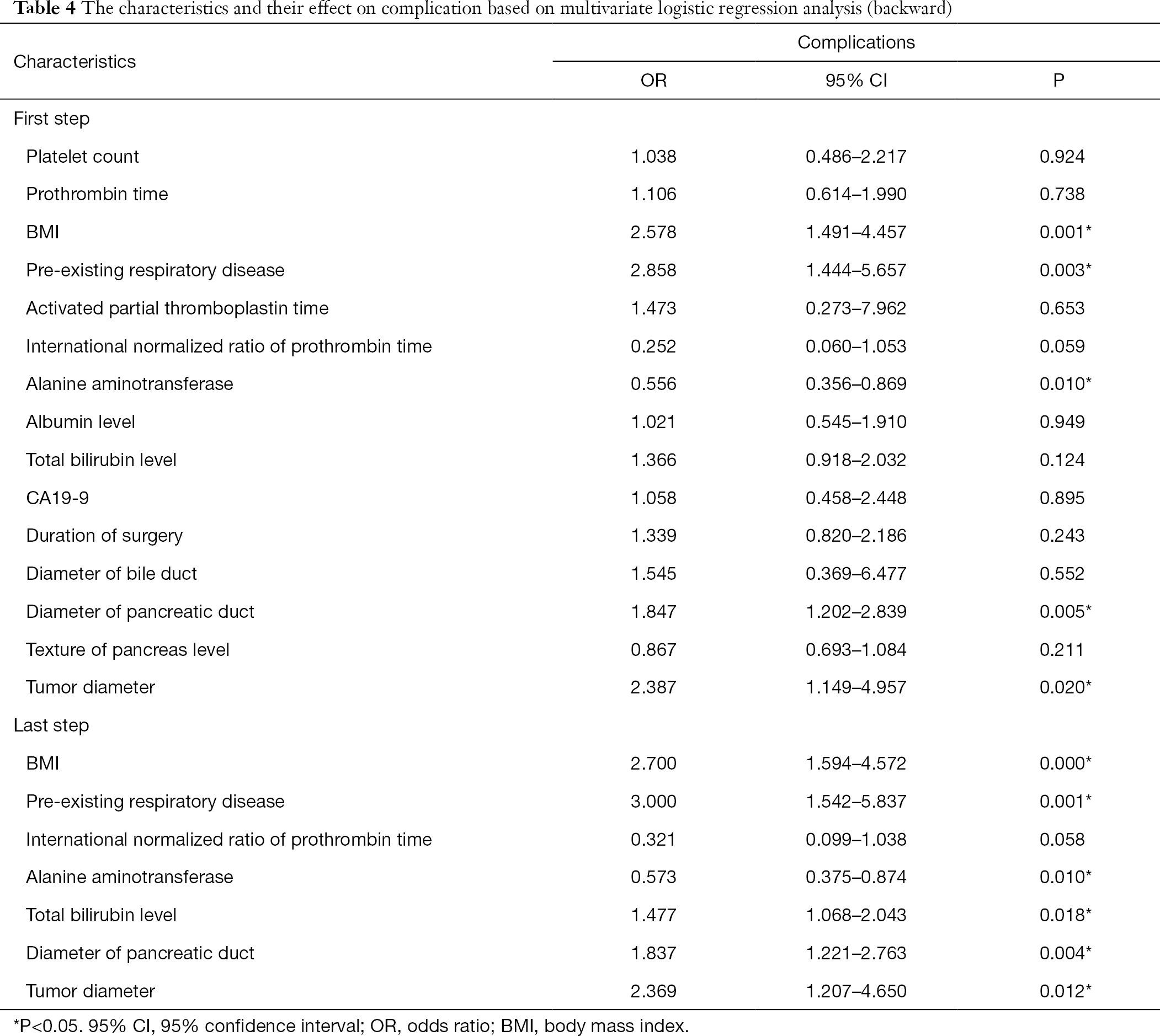 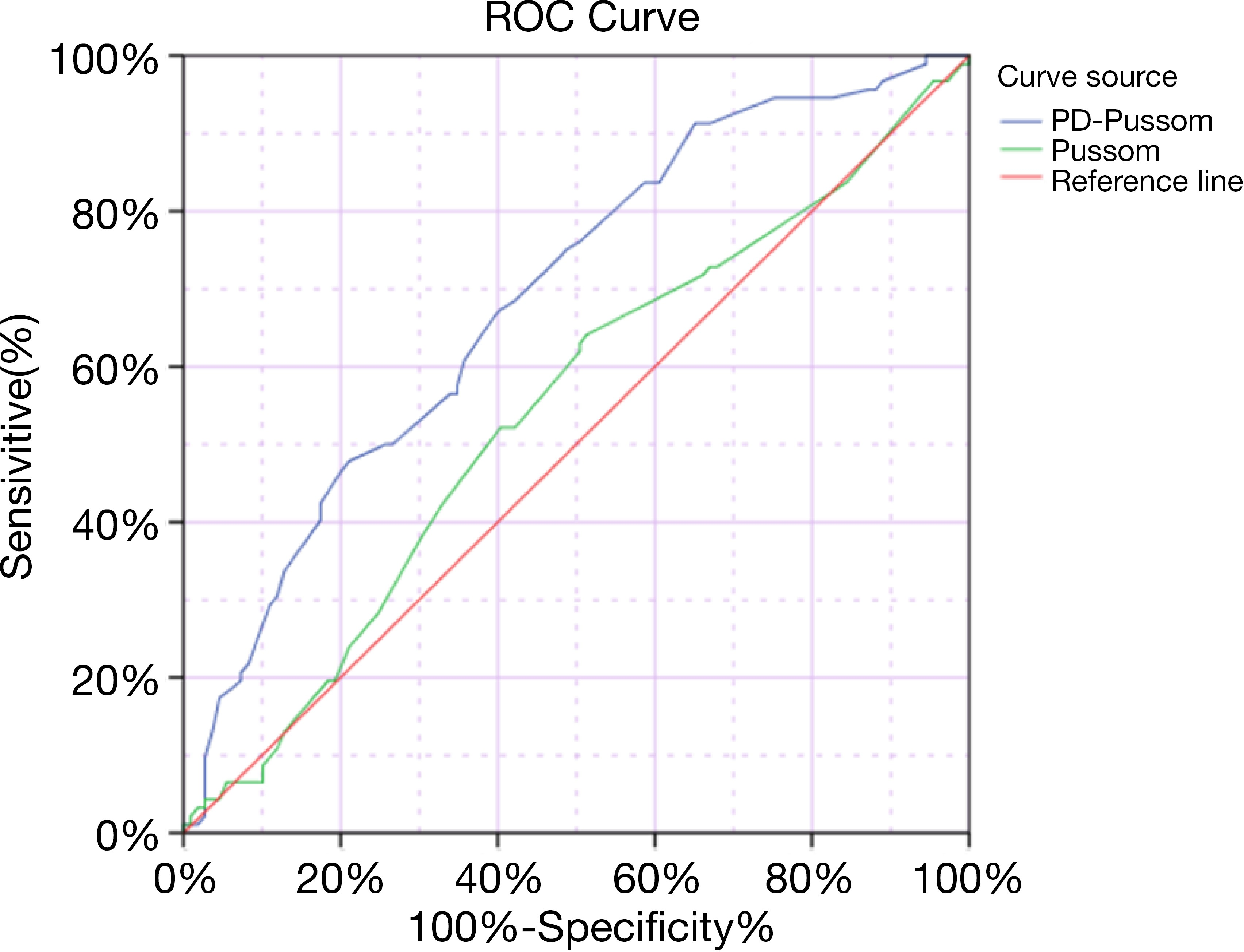 Statistically significant factors for complication were identified by multivariate logistic regression model as well as in scorePD-POSSUM. Each index in the multiple logistic regression models was taken as the score of the corresponding index. Next, we added these scores to ScoreOS. The final equation of scorePD-POSSUM was obtained by adding the ScorePS and ScoreOS (Table S2):

We then derived scorePOSSUM (Table S1) for performing comparisons with scorePD-POSSUM scoring systems that have been shown to be associated with postoperative morbidity rate:

To confirm that BMI, the pre-existing comorbidity of respiratory diseases, alanine aminotransferase, and total bilirubin level, diameter of pancreatic duct and tumor diameter have an impact on post-PD complications, we further analyzed the correlation of the morbidity after PD with associated risk factors by calculating Spearman correlation coefficients (Table 2). In the multivariate linear regression (backward), natural logarithm complications are still associated with BMI (P=0.000) in the case where all other variables being held at fixed values, the pre-existing comorbidity of respiratory diseases (P=0.002), alanine aminotransferase (P=0.013), total bilirubin level (P=0.019), diameter of pancreatic duct (P=0.004), and tumor diameter (P=0.011), and the program retained the international normalized ratio of prothrombin time (P=0.083) during the backward process (Table 3).

While these risk factors were assessed using the POSSUM scoring system for the first time, some studies have shown a significant link between these factors and complications. For example, El Nakeeb et al. (11) analyzed 471 cases of pancreaticoduodenectomy and found that BMI >25 was a risk factor for postoperative pancreatic fistula (POPF). Gaujoux et al. (12) analyzed 100 successive cases of pancreaticoduodenectomy and similarly found that BMI >25 was a risk factor for pancreatic fistula after pancreaticoduodenectomy. And POPF is one of the most serious complications following PD. The higher incidence of post-PD complications in patients with increased BMI may be associated with the following factors: increased difficulty in exposing the pancreas during surgery cause by a higher volume of abdominal fat and peripancreatic fat, a higher risk of damage to the pancreatic capsule during separation attributed to a soft and brittle pancreas, and a higher risk of pancreatic leakage due to damage to the pancreatic tissue and fine pancreatic ducts cause by suturing and knotting during pancreaticojejunal anastomosis. With regard to alanine aminotransferase, the reasons why higher alanine aminotransferase accompanied by a lower OR in multivariate logistic regression, as inferable from our study, is that the patient has a higher transaminase on admission, which means poor liver function. For patients with poor liver function, in general, the doctor always gives patients positive liver protection treatment. Patients who have received active liver protection have recovered their liver function before surgery and can withstand the physical challenges of surgery (13,14). Jaundice has been previously reported to be patient-related risk factors, predisposing to pancreatic fistula after PD (15). The duration of jaundice is found to influence this poor outcome (16). Yeh et al. demonstrated that jaundiced patients with impaired creatinine clearance not only had a higher incidence of PJ leak, but were also more liable to experience sepsis and intraabdominal bleeding, which uniformly elicited a grave clinical course. Moreover, the cause of jaundice is the concentration of total bilirubin in the blood. With regard to the pre-existing comorbidity of respiratory diseases, it has already been widely accepted as a significant risk factor that predisposes patients to complications (17,18). In addition, the larger the diameter of the tumor, the greater the probability that the tumor will invade the surrounding blood vessels, and the higher the chance of the patient's combined vascular resection and the more intraoperative blood loss (8,19,20). Moreover, intraoperative blood loss and combined vascular resection had been proved to be risk factors for post-PD complications. In addition, the more the patient's nutritional status declines sharply; and the nutritional status of the patient directly affects the patient’s postoperative recovery. Furthermore, the smaller the inner diameter of the pancreatic duct, the more likely it is to cause pancreatic fistula, which has been confirmed by most scholars (19-22). Finally, an explanation for why we included INR-PT (international normalized ratio of prothrombin time) as a risk factor in our formula, although its P value (P=0.058) is greater than 0.05, is warranted.

Firstly, in the process of logistic regression and linear regression, the program automatically retains the INR-PT, which means that the program understands INR-PT as one of the risk factors for postoperative complications. Secondly, although its P value is greater than 0.05 yet still close to 0.05, there is still a strong correlation between INR and postoperative complications; many clinical studies have proved that coagulation function will also affect postoperative complications. P value greater than 0.05 maybe caused by insufficient sample size. On the other hand, the reasons why higher INR accompanied by a lower OR in multivariate logistic regression is that, as our study finds, patients with poor preoperative coagulation function will undergo a period of improved coagulation therapy before surgery. The worse the coagulation function patients were, the greater the intensity of the treatment they accepted, which reduces the occurrence of postoperative gastrointestinal and intraabdominal bleeding.

This study has several limitations. First, the most obvious is the study design, which is retrospective, not a prospective, randomized control study. As a result, there may be some bias in several areas. The second limitation is that the data in this study are based on the experience of a single institution. This may lead to some deviation in the preoperative treatment of patients, such as surgical operation or drainage tube treatment. To summarize, this study has several potential limitations, and the results have not been confirmed. In the future, these results should be verified and improved in multi-agency, prospective, randomized and controlled trials and some of the above criteria should be considered.

In summary, body mass index, the pre-existing comorbidity of respiratory diseases, active liver function protection, total bilirubin level, diameter of pancreatic duct, tumor diameter, and international normalized ratio of prothrombin time are associated with post-PD complications. On the basis of our findings, we have made improvements to the formula of POSSUM scoring system that can help estimate and predict more precisely whether complications will actually take place. We have established a practical score (scorePD-POSSUM) that might provide individual predictions on post-PD complications. ScorePD-POSSUM can help surgeons to obtain individualized predictions of possible morbidity associated with the proposed surgery and educate patients about their appropriate expectations for the post-operative process. More importantly, prevention and reduction of complications can be prevented by early intervention.

Thanks to Peng Li and Guo Peng for their valuable comments and suggestions on a previous draft of this article.

Reporting Checklist: The authors have completed the STROBE reporting checklist. Available at http://dx.doi.org/10.21037/tcr-20-828

Availability of Data and Material: All data and material from the clinical treatment process are faithfully represented in this study and are real and available. In accordance with patient privacy protection protocol, we cannot share their information and related data.

Conflicts of Interest: All authors have completed the ICMJE uniform disclosure form (available at http://dx.doi.org/10.21037/tcr-20-828). The authors have no conflicts of interest to declare.

Ethical Statement: The authors are accountable for all aspects of the work in ensuring that questions related to the accuracy or integrity of any part of the work are appropriately investigated and resolved. The research conformed to the Declaration of Helsinki (as revised in 2013). The present study was approved by the Ethics Committee of The Fourth Affiliated Hospital of Hebei Medical University (Shijiazhuang, China) (ID: 2016MEC078). All patients provided their written informed consent.