WD repeat and suppressor of cytokine signaling (SOCS) box containing proteins (WSB) are the member of SOCS family. Up to date, only two sub-types WSB proteins have been identified, named as WSB1 and WSB2 (5). There were many researches which studied the relationship between WSB1 and cancer. For example, a study found that increased levels of WSB1 in primary osteosarcomas correlated with pulmonary metastatic potential (6). Besides, WSB1 also play a role in neuroblastoma cell growth and tumor progression (7). However, there was not much study on the function of WSB2 in cancer. Existing studies demonstrated that WSB1 and WSB2 contain eight WD-40 repeats and a SOCS box domain and show the similar levels (approximately 65%) and distribution. Thus, WSB1 and WSB2 potentially share some functional homology (8). Based on participation of WSB1 in the progression of cancer, and there have been no reports about the effect of the WSB2 on the development of Xuanwei lung cancer, therefore the functional role of WSB2 in Xuanwei lung cancer was explored here.

We present the following article in accordance with the ARRIVE reporting checklist (available at http://dx.doi.org/10.21037/tcr-20-2450).

The study was conducted in accordance with the Declaration of Helsinki (as revised in 2013). The study was approved by the Ethics Committee of Yunnan Cancer Hospital (NO.: KY2019.57) and informed consent was taken from all the patients.

The relative mRNA levels of WSB2 in tissues and cells were detected using qRT-PCR. Total RNA in Xuanwei lung cancer cells and tissues were isolated using TRIzol reagent (#DXT-15596018, Gibco, USA). After transcribed the extracted RNA into cDNA by using a Reverse Transcription Kit (PE013-01, AIVD, Guangdong, China), the qRT-PCR analysis was carried out with the ABI7300 system by using a SYBR green PCR kit (218073, Qiagen, Germany). Reaction system was as follows: cDNA 2.5 µL, primer (10 µmol/L) 2 µL, 2× Tag PCR Master Mix 12.5 µL, DEPC 8 µL, the total volume was 25 µL. Reaction was carried out at pre-denaturation at 95 °C for 2 min, denaturation at 95 °C for 15 s, annealing at 60 °C for 10 s, extending at 75 °C for 40 s, and finally extending at 75 °C for 2 min. U6 was selected as an internal reference. WSB2 level was calculated by using 2−ΔΔCt method.

The protein levels of WSB2, E-cadherin, N-cadherin, vimentin, c-Myc and β-catenin in cells were determined by Western blotting. A RIPA lysis buffer (orb348557, Biorbyt, UK) was used to extract total proteins from transfected A549 and XWLC-05. Ten percent sodium dodecyl sulfate polyacrylamide gel electrophoresis (SDS-PAGE, YB100915-12, Ybscience, Shanghai, China) was used to separate the extracted proteins, and then blotted onto polyvinylidene fluoride (PVDF) membranes (25900446, GE, USA). Then membrane was incubated with 5% skimmed milk at 25 °C for 1 h. After that, the primary antibodies against WSB2 (ab127176, Abc4am, USA), E-cadherin (PA512542, Pierce, USA), N-cadherin (PA529569, Pierce), vimentin (PA512321, Pierce), c-Myc (ab39688, Abcam), β-catenin (DXT-130-107-174, Miltenyi, USA) and GAPDH (PA515035, Pierce) were incubated at 4 °C overnight. All primary antibodies were diluted at the concentration of 1:1,000. Following that, secondary antibodies (20775, Millipore, USA) were incubated at 25 °C for 1 h. The enhanced chemiluminescence kit (orb90502, Biorbyt) was used to visualize the signals. GAPDH was the reference control. The optical density of blot was analyzed by using the ImageJ software.

Cell viability was monitored by using MTS assay. Briefly, transfected A549 and XWLC-05 cells were plated into 96-well plates and maintained in an incubator at 37 °C with 5% CO2. Following 48 h, 20 µL of MTS (S12069, Yeyuan, Shanghai, China) was added and incubated for 2 h. Then the absorbance value at 490 nm was quantified using microplate autoreader (iMark, Bio-Rad, USA).

The change of cell invasion ability was determined by using Transwell assay. Briefly, A549 and XWLC-05 cells transfection with WSB2 were plated in the upper chamber coated with Matrigel (356234, BD Biocoat, USA), while the lower chamber was added 500 µL DMEM medium containing 20% FBS and incubated for 8 h. Then, invaded cells in lower sides of Transwell were fixed with 95% ethanol (orb63597, Biorbyt) for 30 min. Following that, cells were incubated with 0.1% crystal violet (C8470, Solarbio, Shanghai, China) for 15 min and observed and photographed under microscope.

Xenograft mouse model was used to examine tumor growth. The procedures for care and use of animals were approved by the Ethics Committee of the Third Affiliated Hospital of Kunming Medical University and all applicable institutional regulations and concerning the ethical use of animals were followed. In brief, transfected A549 and XWLC-05 cells (5×106) were incubated into the back of nude mice. Tumor volumes were measure twice a week and calculated according to the following equation: volume = (length×width2)/2. At 35 days, tumors were isolated from mice via anesthesia.

All data were presented as the mean ± standard deviation (SD). Statistical analysis was conducted by GraphPad Prism. T-tests, ANOVA and Chi-square tests were conducted to determine differences. P value less than 0.05 was considered statistically significant. 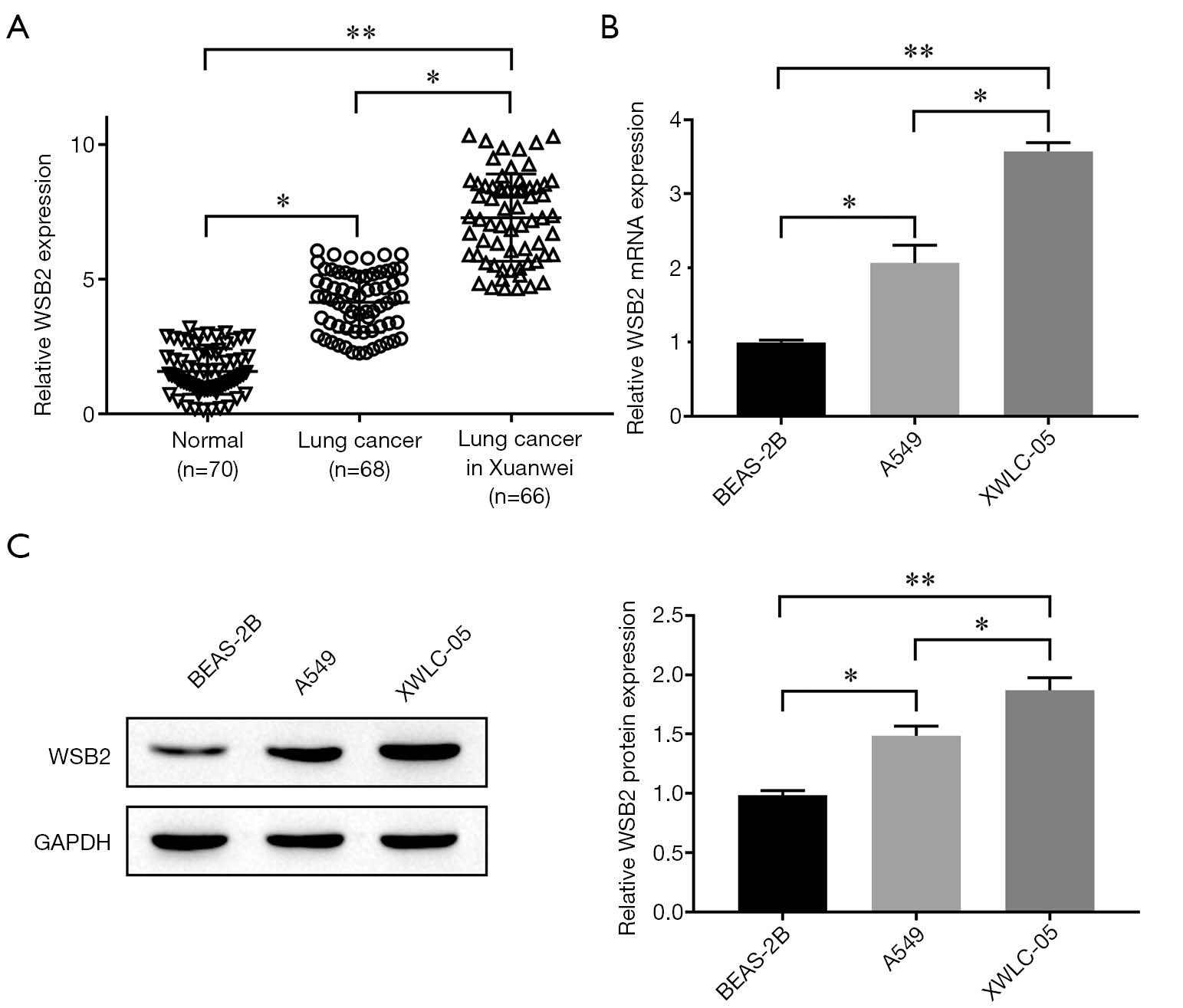 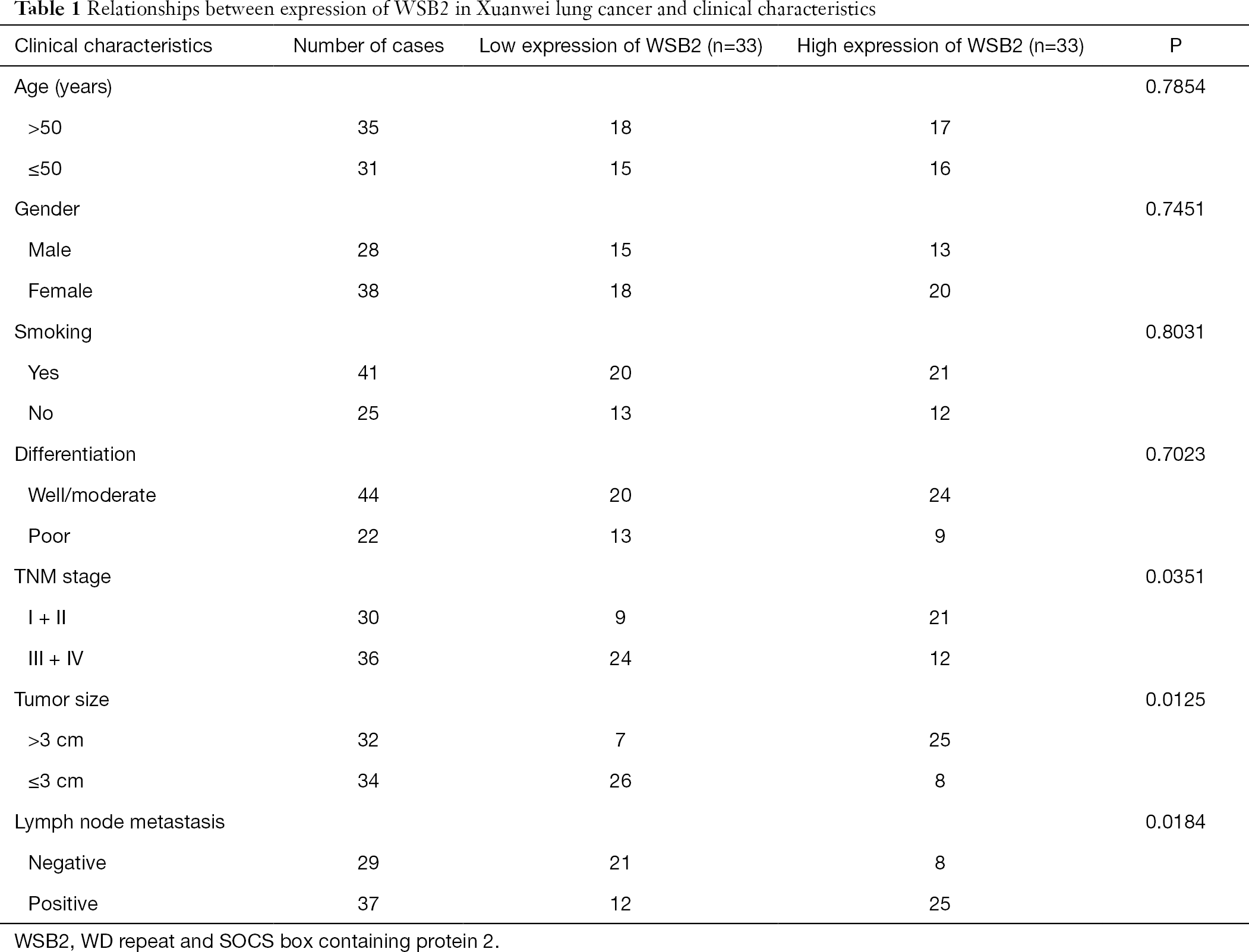 To further explore the effects of WSB2 on Xuanwei lung cancer, we manipulated the expression level of WSB2 in A549 and XWLC-05 by transfecting sh-WSB2. qRT-PCR (Figure 2A) and Western blotting (Figure 2B) results demonstrated WSB2 level was notably reduced in sh-WSB2 transfected cell, when compared with control. Moreover, The MTS results revealed that cell proliferation of A549 and XWLC-05 with WSB2 knockdown significantly decreased compared with control group (Figure 2C). Besides, flow cytometry analysis of cell apoptosis and cell cycle progression showed that knockdown of WSB2 in A549 and XWLC-05 promoted the cell apoptosis (Figure 2D) and effectively resulted in cell cycle blockage (Figure 2E). Moreover, knockdown of WSB2 suppressed EMT process in A549 and XWLC-05, as supported by the increase of E-cadherin and decrease of N-cadherin and vimentin in sh-WSB2 transfected cells (Figure 2F). Consistently, WSB2 knockdown also effectively reduced cell invasion of A549 and XWLC-05 (Figure 2G). Therefore, knockdown of WSB2 suppressed the progression of lung cancer in XWLC-05 more noticeable then A549. 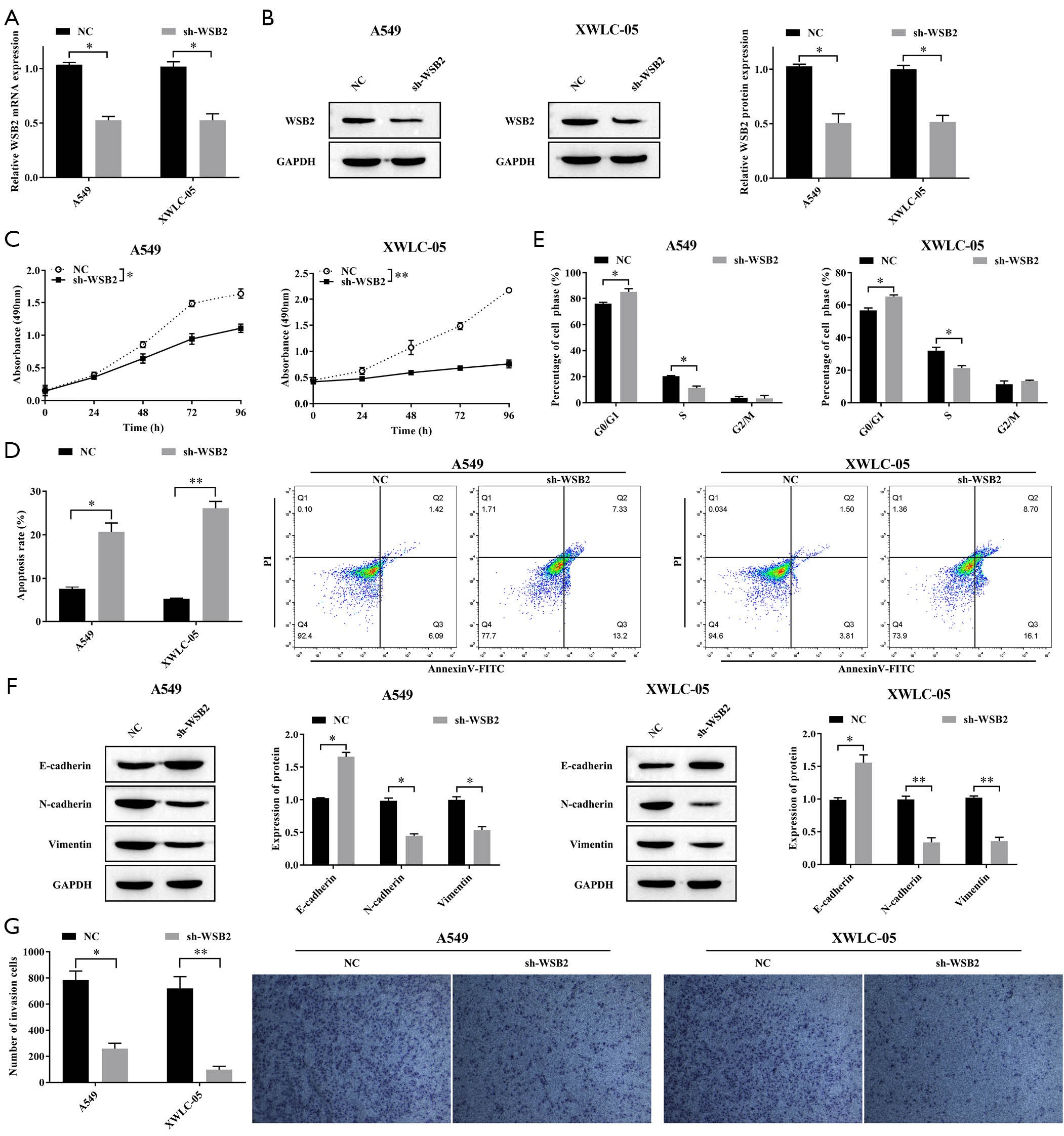 Knockdown of WSB2 inhibited the tumor growth in vivo

In addition, the xenograft model in nude mice was established by injecting the A549 and XWLC-05 which were knockdown of WSB2. Our data revealed WSB2 down-regulation effectively delayed tumor growth (Figure 3A,B,C). Hence, knockdown of WSB2 remarkably inhibited the tumor growth of lung cancer in Xuanwei. 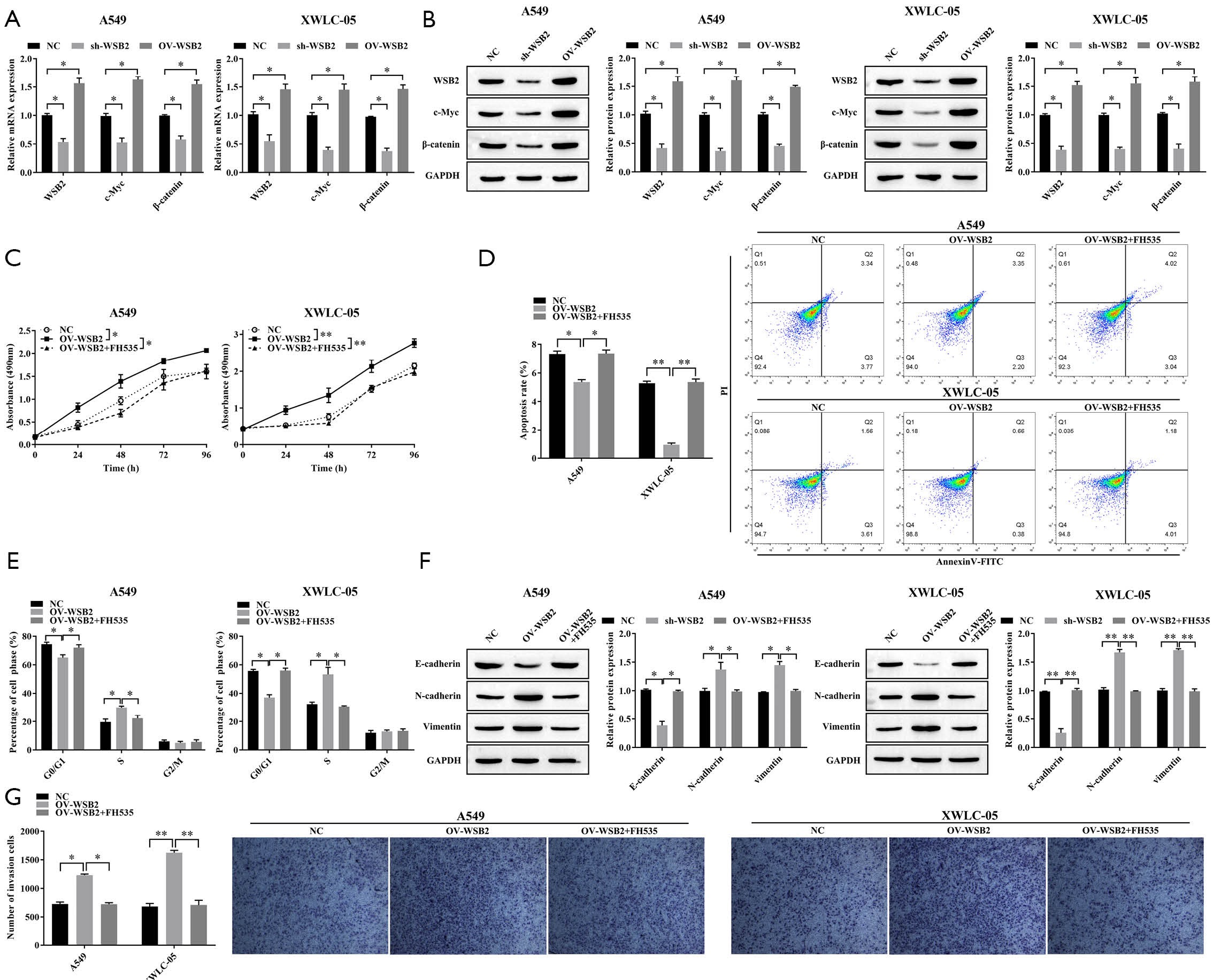 Since the mid-1970s, the morbidity and mortality of lung cancer in Xuanwei continuously rises, and ranks the first in China (14). Therefore, looking for an effective therapeutic target for targeted therapy is an important research direction (15). Our current findings indicated that WSB2 was frequently over-expressed in both Xuanwei lung cancer tissues and cells, and WSB2 act as oncogene in the tumorigenesis of Xuanwei lung cancer through regulating Wnt/β-catenin signaling.

Based on the severity of lung cancer in Xuanwei, increasingly researchers are paying attention to it. A recent study revealed that the predisposing risk factor for Xuanwei lung cancer was delayed effect of the indoor air pollution over 30 years (16). Mostly of the researches on lung cancer in Xuanwei studied the complex interaction between environmental factor or tobacco use and lung cancer risk (17). As one of the WSB proteins, there are plenty of researches focused on the function of WSB1, conversely, there have been surprisingly few studies of the function of WSB2. To our current knowledge, numerous researches have found the frequently expression of WSB1 in various types of cancer (18). Such as, WSB1 knockdown significantly reduced the invasiveness of hormone receptor negative breast cancer cells (19). Furthermore, there was a research indicated that miR-592 could inhibit aerobic glycolysis and growth hepatocellular carcinoma through directly targeting WSB1 (20). Besides, a study reported that WSB1 could rescue tumor cell senescence-induced by oncogene through promoting the ubiquitination degradation of ATM (21). While considering WSB2, one study found that WSB2 gene might be involved in the development of myeloid leukemia through binding to the COOH-terminal region of colony-stimulating factor receptor and subsequently affecting its level and function (22). And there was also a study indicating that WSB2 expression was related to the resistance to prednisone and vincristine in myeloma (23). Besides, a study found that WSB2 was associated with poor clinical outcome of malignant fibrous histiocytoma (24). Moreover, a recent study suggested that WSB2 related to the overall survival time period of estrogen receptor (ER)-positive breast cancer patients with high risk scores (25). Additionally, knockdown of WSB2 also could suppress growth and metastasis through regulating p-Rb, CDK4 and cyclin D3 in melanoma cells (13). Consistent with existing reports, our results revealed that WSB2 was frequently elevated in lung cancer, especially in Xuanwei lung cancer tissues and cell lines. Knockdown of WSB2 notably reduced cell viability, cell invasion, EMT process, while induced apoptotic cell death and cell cycle arrest of Xuanwei lung cancer cells. Besides, we also found that knockdown of WSB2 delayed tumor growth in vivo. Our research supports that WSB2 acts as a crucial prognostic bio-marker of lung cancer, notably lung cancer in Xuanwei. 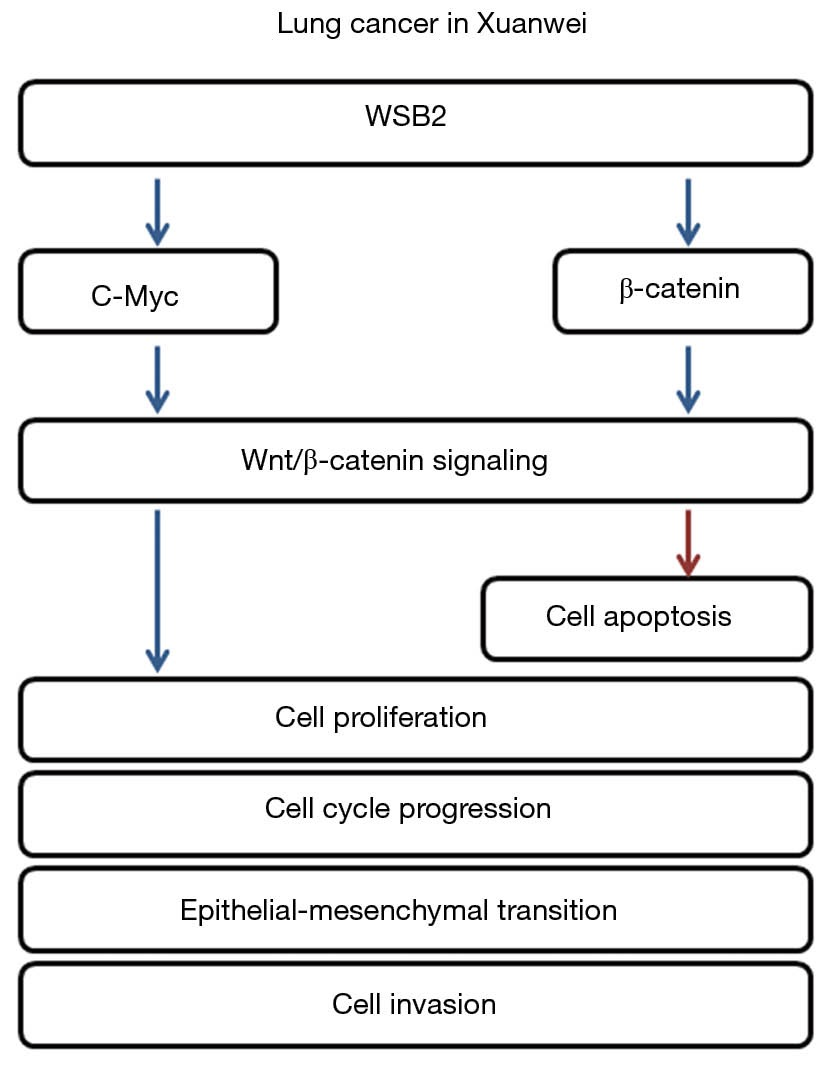 We thank all the authors who contributed to this study.

Reporting Checklist: The authors have completed the ARRIVE reporting checklist. Available at http://dx.doi.org/10.21037/tcr-20-2450

Conflicts of Interest: All authors have completed the ICMJE uniform disclosure form (available at http://dx.doi.org/10.21037/tcr-20-2450). The authors have no conflicts of interest to declare.

Ethical Statement: The authors are accountable for all aspects of the work in ensuring that questions related to the accuracy or integrity of any part of the work are appropriately investigated and resolved. The study was conducted in accordance with the Declaration of Helsinki (as revised in 2013). The study was approved by the Ethics Committee of Yunnan Cancer Hospital (NO.: KY2019.57) and informed consent was taken from all the patients. The procedures for care and use of animals were approved by the Ethics Committee of the Third Affiliated Hospital of Kunming Medical University and all applicable institutional regulations and concerning the ethical use of animals were followed.