Gastric cancer (GC) remains the second most common cause of cancer-related death worldwide despite the steady decrease in its incidence over the past decades (1). There is consensus that curative resection is the only way to achieve cure in GC and that perioperative chemotherapy might help prolong overall survival (OS) in patients with advanced stage disease (2). Conversion therapy is adopted to achieve radical cure for patients with originally unresectable but potentially resectable GC, who obtain partial or complete remission after systemic treatment, to acquire relatively longer postoperative survival and recurrence-free survival. GC patients with bulky N2 disease (i.e., with at least three second-tier lymph nodes measuring ≥1.5 cm or with a mass measuring ≥3 cm composed of two or more second-tier lymph nodes) have relatively poorer prognosis and shorter survival (3). Moreover, GC with bulky lymph node metastases were usually considered oncologically unresectable.

The most efficient preoperative chemotherapy regimen currently available for advanced stage GC appears to be the combination of fluorouracil and platinum drugs (4-7). Apatinib, a novel, small molecule, selective vascular endothelial growth factor receptor-2 (VEGFR-2) tyrosine kinase inhibitor, may significantly improve OS and progression-free survival (PFS) in patients with advanced stage GC refractory to two or more prior chemotherapies (8). With regard to surgery, the latest edition of the Japanese Guidelines for Gastric Cancer recommends D2 lymphadenectomy as the standard procedure for GC patients, although other sources suggest that D2 lymphadenectomy plus para-aortic lymph node dissection could improve prognosis in some specific subgroups (9).

We report a patient with unresectable GC and bulky lymph node metastases who was treated with two cycles of S-1 and oxaliplatin (SOX) chemotherapy plus apatinib, followed by curative gastrectomy and D2 gastrectomy with para-aortic lymph node dissection. There was no tumor recurrence or distant metastasis even 2 years after surgery. This treatment of combining neoadjuvant chemotherapy with targeted therapy for unresectable GC patients with bulky lymph node metastases might provide a treatment reference. We present the following article in accordance with the CARE reporting checklist (available at http://dx.doi.org/10.21037/tcr-20-1400). 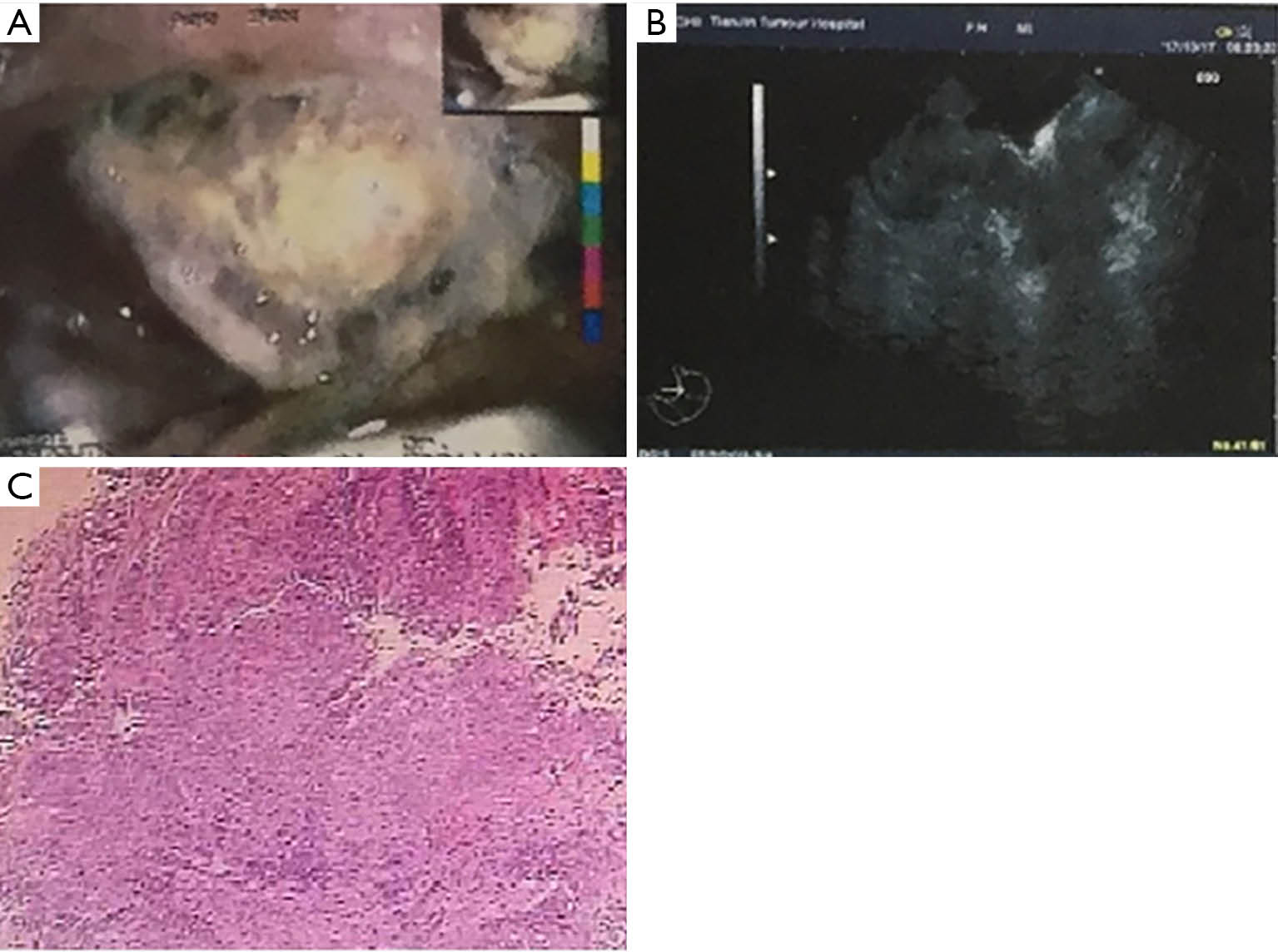 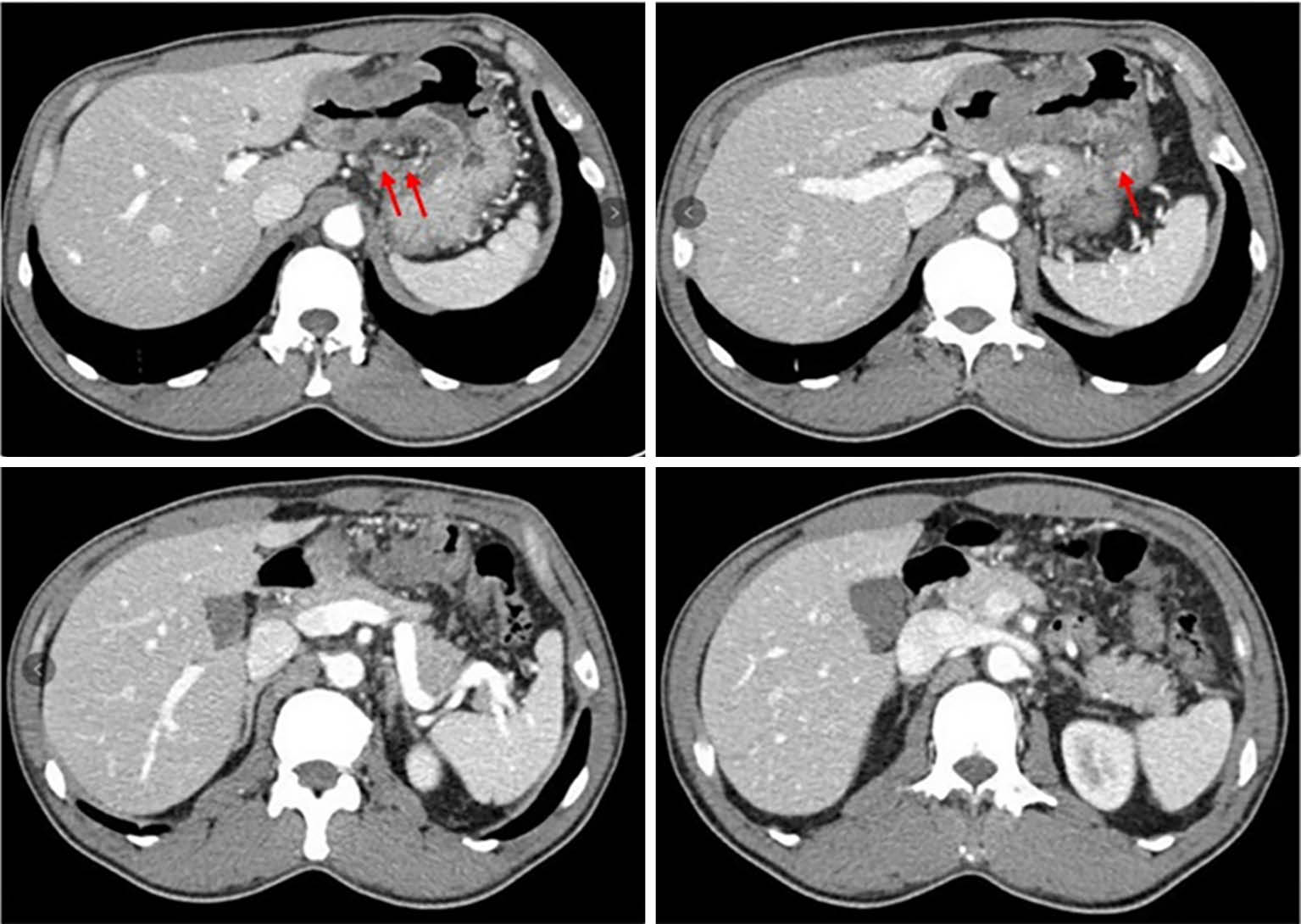 After multidisciplinary team (MDT) consultation, it was decided to administer three cycles of systemic SOX chemotherapy plus apatinib, and then repeat abdominal enhanced CT scan to reassess the feasibility of curative gastrectomy. Apatinib was given orally (500 mg/day) for continuous two cycles, followed by a one-cycle rest. S-1 was given orally twice daily for 2 weeks, followed by a 1-week break. The dose of S-1 was determined based on the body surface area (BSA) as follows: BSA <1.25 m2, 80 mg/day; BSA 1.25 to <1.50 m2, 100 mg/day and BSA 1.50 m2, 120 mg/day. And this patient was administrated with the dose of 100 mg/day for his BSA between 1.25 and 1.50 m2. Oxaliplatin was administered at 130 mg/m2 intravenously on day 1. However, the patient was only treated for two cycles due to the severe side effects. Repeat enhanced CT after drug therapy showed partial remission of the stomach wall thickness, and decrease in the maximum diameter of all perigastric and extragastric lymph nodes to <1.0 cm (Figure 3). Tumor markers were not markedly increased (CA-242: 1.72 IU/mL, CA72-4: 1.34 U/mL, CA19-9: 9.67 U/mL, CEA: 6.15 µg/L). 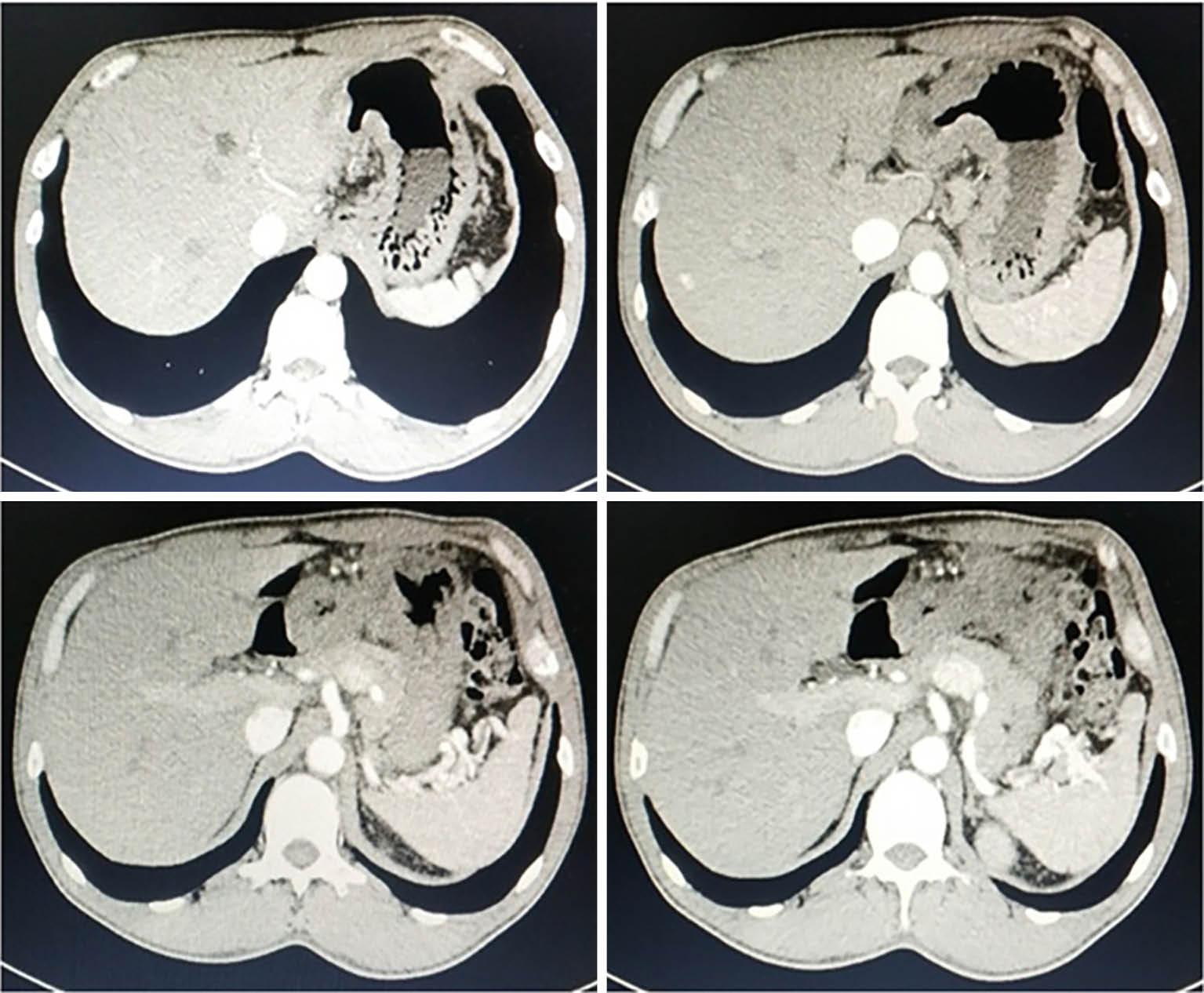 Four weeks later, after peritoneal dissemination was ruled out by laparoscopy (Figure 4A) and peritoneal lavage cytology (Figure 4B), radical distal subtotal gastrectomy plus D2 lymphadenectomy with para-aortic lymph node dissection was performed (Figure 5). The ulcer-type tumor was located in the lesser curvature of stomach body. Serosal and transverse mesocolic invasion was present. Histopathological examination confirmed poorly differentiated adenocarcinoma. However, all 140 examined lymph nodes were negative. The chemotherapy response of the tumor was TRG 3 grade, and the TNM classification was ypT4bN0M0. Expression of cancer molecular biomarkers on immunohistochemical staining was as follows: CK8/18 (+), CK7 (+), Ki-67 (80%), and HER-2 (–) (Figure 6).

Figure 4 Intraoperative diagnosis. (A) The laparoscopic detection of the abdominopelvic cavity of patient; (B) the result of the peritoneal lavage cytology of patient (SP ×100, HE staining). 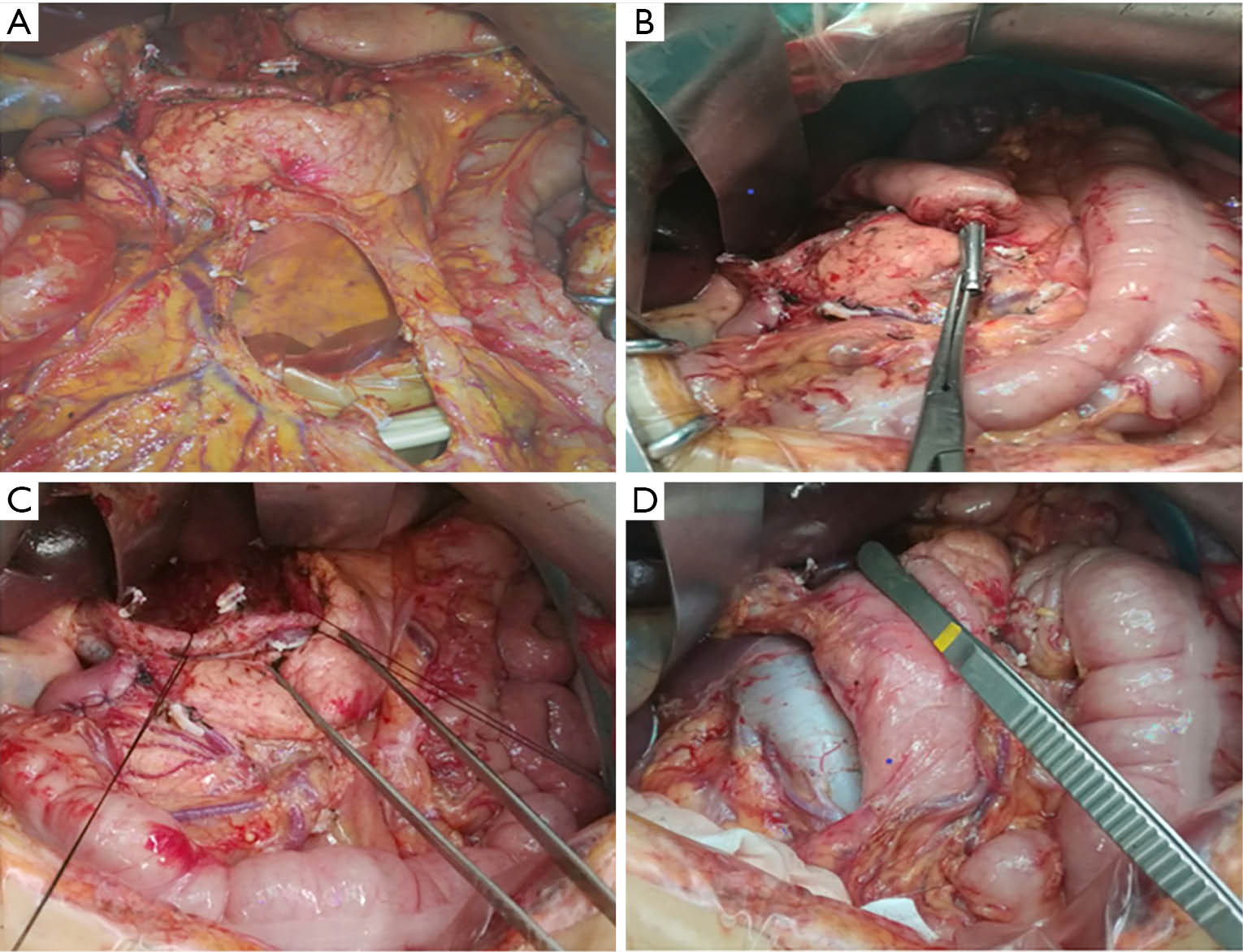 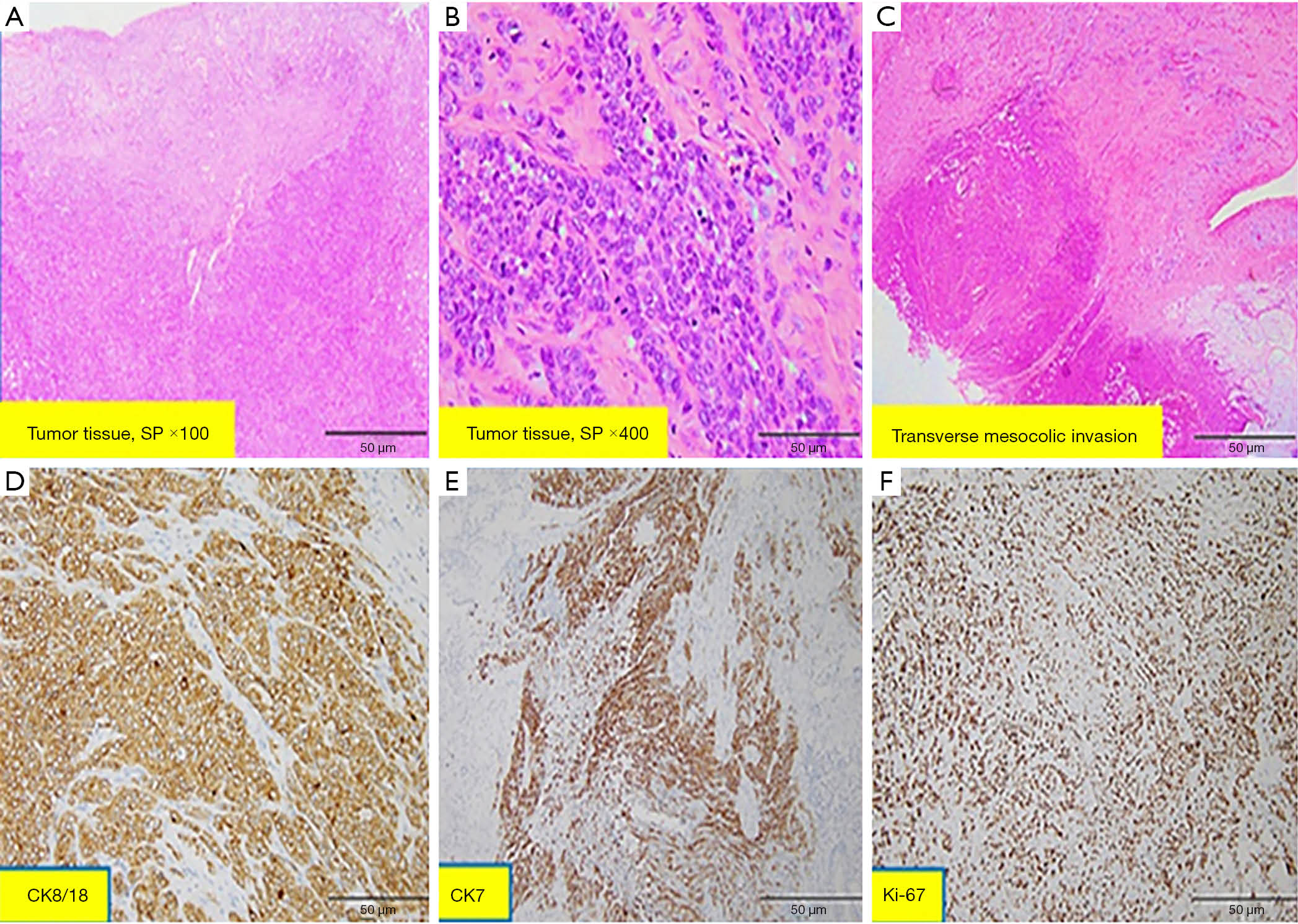 The patient was discharged 10 days after surgery. Two cycles of postoperative SOX chemotherapy were administered, but then had to be stopped because of serious side effects. The patient has been followed up regularly with CT scan and endoscopy. No local recurrence or distant metastasis has been detected even 2 years after surgery (Figure 7), and serum tumor markers remain within normal limits (CA72-4 1.15 U/mL, CA19-9 2.38 U/mL, CA125 3.88 U/mL). 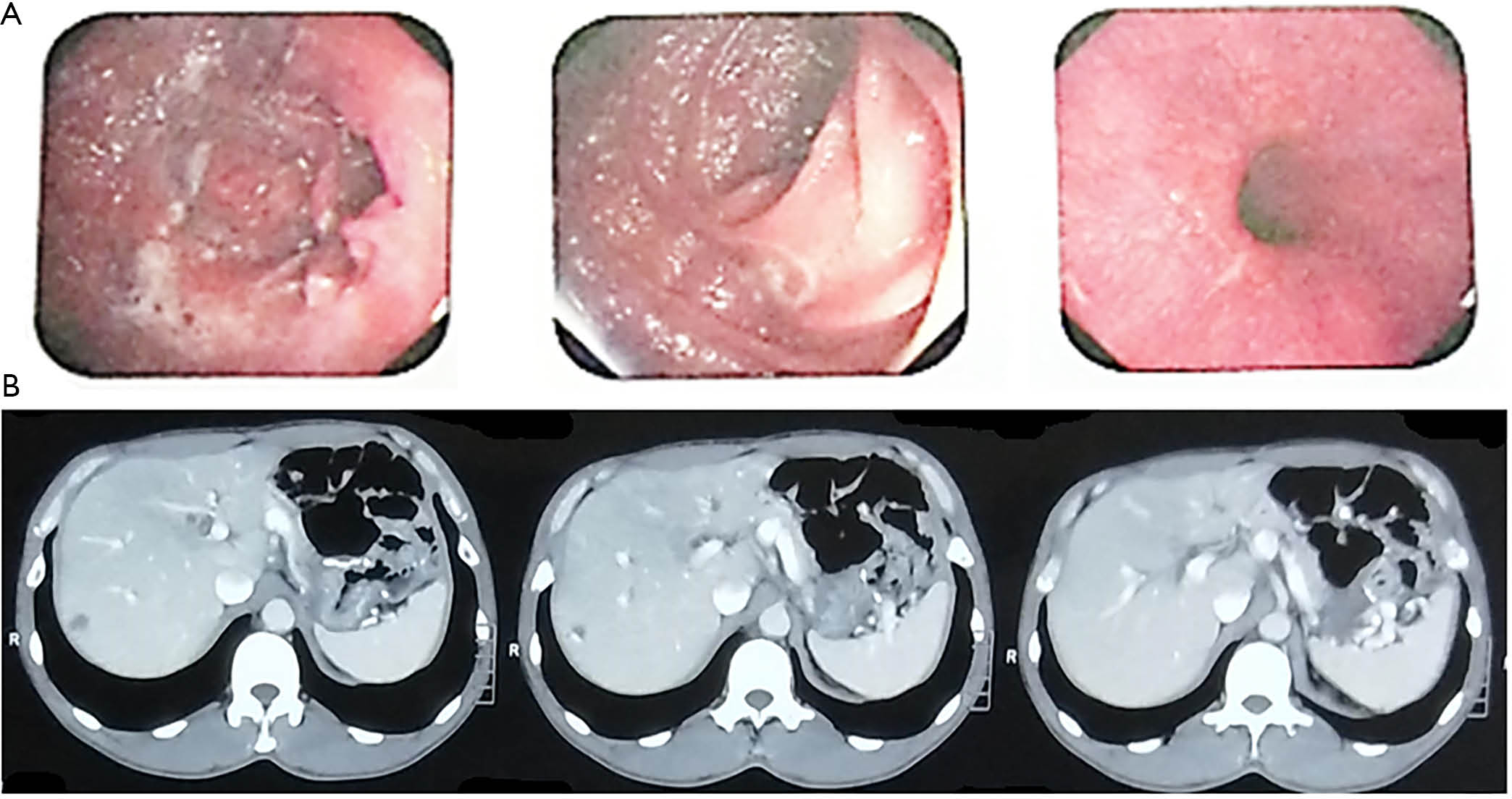 All procedures performed in studies involving human participants were in accordance with the ethical standards of the institutional and/or national research committee(s) and with the Helsinki Declaration (as revised in 2013). Written informed consent was obtained from the patient. The timeline of case report is clearly shown in Figure 8.

Conversion therapy, a new treatment strategy for GC, is attracting wide attention. Some retrospective analyses have revealed that S-1 based treatment regimens can provide good prognosis for patients in whom conversion therapy is successful (11,12). Sato et al. (12) reported that docetaxel, cisplatin, and S-1 (DCS) chemotherapy followed by surgery could improve long-term survival, especially in patients with lymph node metastases or T4 stage disease (invasion of an adjacent organ). In Japan, after a long struggle and with support from some compelling evidence from the JCOG phase II studies on bulky N disease, Kodera (3) demonstrated that S-1 and cisplatin can be the standard first-line neoadjuvant chemotherapy for advanced GC with bulky lymph node metastases. Preoperative chemotherapy has several benefits: it increases the probability of curative resection, it eliminates micrometastasis, it provides rapid improvement in tumor-related symptoms, and it determines the chemosensitivity of the tumor (13,14). In the latest edition of the Japanese Gastric Cancer Treatment guidelines, both SOX are recommended for prolonging survival in advanced stage GC patients (4-6). Oxaliplatin was proved to be less nephrotoxic than cisplatin. Moreover, Combination chemotherapy with SOX for advanced GC has shown promising efficacy with acceptable toxicity (15,16) and was recommended as neoadjuvant chemotherapy for patients with advanced GC in previous studies (17). Nevertheless, a recent integrated analysis of two phase II trials (JCOG0001 and JCOG0405) of preoperative chemotherapy for unresectable GC showed that poor prognosis in patients having both bulky N+ and PAN+ may necessitate further treatment improvement (10).

Apatinib, a new VEGFR-2 tyrosine kinase inhibitor that targets the intracellular ATP binding site of the receptor, inhibits VEGF-mediated proliferation, invasion, migration, and angiogenesis of the cancer (18). The combination of apatinib plus cisplatin has been demonstrated to inhibit tumor growth and improve survival in many human malignancies (8). Furthermore, a recent study showed that SOX plus apatinib followed by surgery in patients with locally advanced gastric adenocarcinoma showed favorable activity and manageable safety (19). In our patient, abdominal enhanced CT scan performed after two cycles of SOX chemotherapy plus apatinib demonstrated marked decrease in the thickness of the stomach wall and in the sizes of perigastric and extragastric lymph nodes.

In our patient, the histopathological response to the conversion treatment was TRG 3 grade, indicating at least partial benefit from neoadjuvant treatment (23). Thus, the SOX plus apatinib regimen may have been effective in suppressing metastasis. A multicenter phase II study of apatinib treatment for metastatic GC indicated that the drug is effective and safe in patients who failed to respond to two or more prior chemotherapy regimens, and that the toxicities were clinically manageable (24). A systematic review and meta-analysis showed that apatinib plus chemotherapy is more effective than chemotherapy alone for patients with advanced GC (25). Dong et al. (26) demonstrated that SOX is more effective than fluorouracil, leucovorin, oxaliplatin (FOLFOX6) and capecitabine, oxaliplatin (XELOX) for controlling lymph node metastasis in locally advanced GC before surgery; the extragastric lymph node metastatic rates with the three chemotherapy regimens were 26.9% vs. 52.2% vs. 42.1%, respectively.

To conclude, our experience with the patient reported here suggests that neoadjuvant therapy with SOX and apatinib can inhibit lymph node metastasis and thereby improve prognosis after surgery in patients with advanced stage GC. Our treatment experience might provide a reference for the treatment of GC patients with bulky lymph node metastases. However, the limitation of this study is that this case report only provided the treatment experience of one patient and whether this treatment is effective for all advanced GC is unknown. Our ongoing randomized controlled trial of this neoadjuvant approach in patients with unresectable GC will provide more evidence.

Reporting Checklist: The authors have completed the CARE reporting checklist. Available at http://dx.doi.org/10.21037/tcr-20-1400

Conflicts of Interest: All authors have completed the ICMJE uniform disclosure form (available at http://dx.doi.org/10.21037/tcr-20-1400). The authors have no conflicts of interest to declare.

Ethical Statement: The authors are accountable for all aspects of the work in ensuring that questions related to the accuracy or integrity of any part of the work are appropriately investigated and resolved. All procedures performed in studies involving human participants were in accordance with the ethical standards of the institutional and/or national research committee(s) and with the Helsinki Declaration (as revised in 2013). Written informed consent was obtained from the patient.