Gastric cancer (GC) is one of the deadliest tumors worldwide. In China, GC is ranked second among all malignancies for incidence and mortality (1). Although current comprehensive treatment protocols have shown improved outcomes in GC, locally advanced gastric cancer (LAGC) still demonstrates a high recurrence rate and metastatic drug resistance, and its 5-year survival rate is less than 25% (2,3).

In the past decade, researchers have found that in a variety of solid tumors, such as gastric, breast, and lung cancers, a small number of cancer cells exert the characteristics of stem cells; these are known as cancer stem cells (CSCs) (4-7). CSCs are characterized by self-renewal, drug resistance, and differentiation (8). In 2009, Takaishi et al. identified gastric cancer stem cells (GCSCs) by studying CD44+ cell surface markers (4). This small part of GCSCs is closely related to the drug resistance, recurrence, and metastasis of GC (9,10). Traditional chemotherapy or radiotherapy can eliminate ordinary cancer cells, but it cannot completely eliminate CSCs. Thus, this part of stem cells is likely to be the key factor in tumor recurrence, and could provide a promising therapeutic target for clinical treatment.

The present study aimed to establish a prognostic model incorporating stemness-related genes in the hope of facilitating a deeper understanding of GCSCs, which may provide potential treatment targets for GC.

Patient clinical information and messenger RNA (mRNA) sequencing data were obtained from The Cancer Genome Atlas (TCGA) and the GSE84437 dataset of the Genome Expression Omnibus (GEO). The TCGA dataset included 375 GC tissues and 32 adjacent cancer tissues, and the GSE84437 dataset comprised 433 GC tissues. Screening to identify suitable genes was performed as follows: (I) The stemness-related genes list was obtained as outlined above; (II) genes that were expressed in both the TCGA GC database and in the GSE84437 dataset were selected.

Identification of stemness-related DEGs in the TCGA database

Using the edgeR limma package, we identified stemness-related DEGs for GC in the TCGA database. DEGs were defined as genes with a |Log2 fold change (FC)| >1.0 and a false discovery rate (FDR) adjusted to P<0.05.

Establishment of a prognostic model and validation model

A prognostic risk score was obtained for all patients by lasso-penalized Cox regression and multivariate Cox regression analysis. The risk score calculation used as follows: . In this formula, n represents the number of genes, Ci represents the coefficient of each gene in multivariate Cox model, and Ei represents the expression level of each gene. Patients were classified into a high-risk score group and a low-risk score group according to the median risk score. To further verify the feasibility of the prognostic model, we also divided the GSE84437 patients into two groups according to the median risk score. The survival of the two groups of patients was analyzed with the Kaplan–Meier (KM) curve.

A prognostic nomogram was established using the ‘rms’ package in R (12). To further verify the accuracy of the prognostic model, ROC curves were drawn using the ‘ROCR’ package. A bootstrapping method with 1,000 resamples was used to reduce over-fitting.

Statistical analyses were performed with GraphPad Prism (version 8.0, San Diego, USA). Independent prognostic factors were determined through multivariate Cox regression. Patient survival time was analyzed using the KM curve, and the log-rank test was used for statistical analysis. A P value <0.05 was considered to be statistically significant. The study was conducted in accordance with the Declaration of Helsinki (as revised in 2013). All information from TCGA, GSEA and GEO is available and free for public, so the agreement of the medical ethics committee board was not necessary.

The stemness-related genes list was obtained from the stemness pathways in the GSEA database (http://software.broadinstitute.org/gsea/downloads.jsp).

Identification of stemness-related DEGs in the TCGA GC database

Co-expressed stemness-related genes were obtained by intersecting the TCGA GC database with the GSE84437 dataset. Using edgeR, we identified 127 DEGs among GC patients; of these DEGs, 42 were downregulated and 85 were upregulated, respectively, with the thresholds of |log2 FC| >1.0 and adjusted P<0.05 (Figure 1A,B). 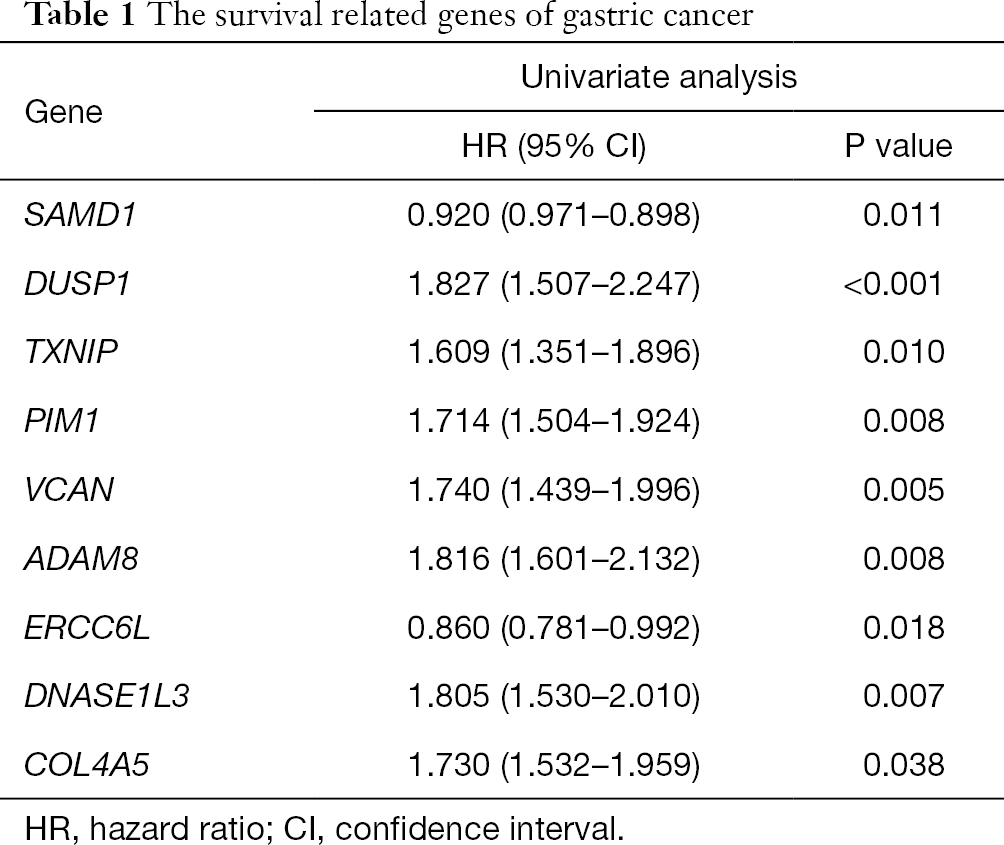 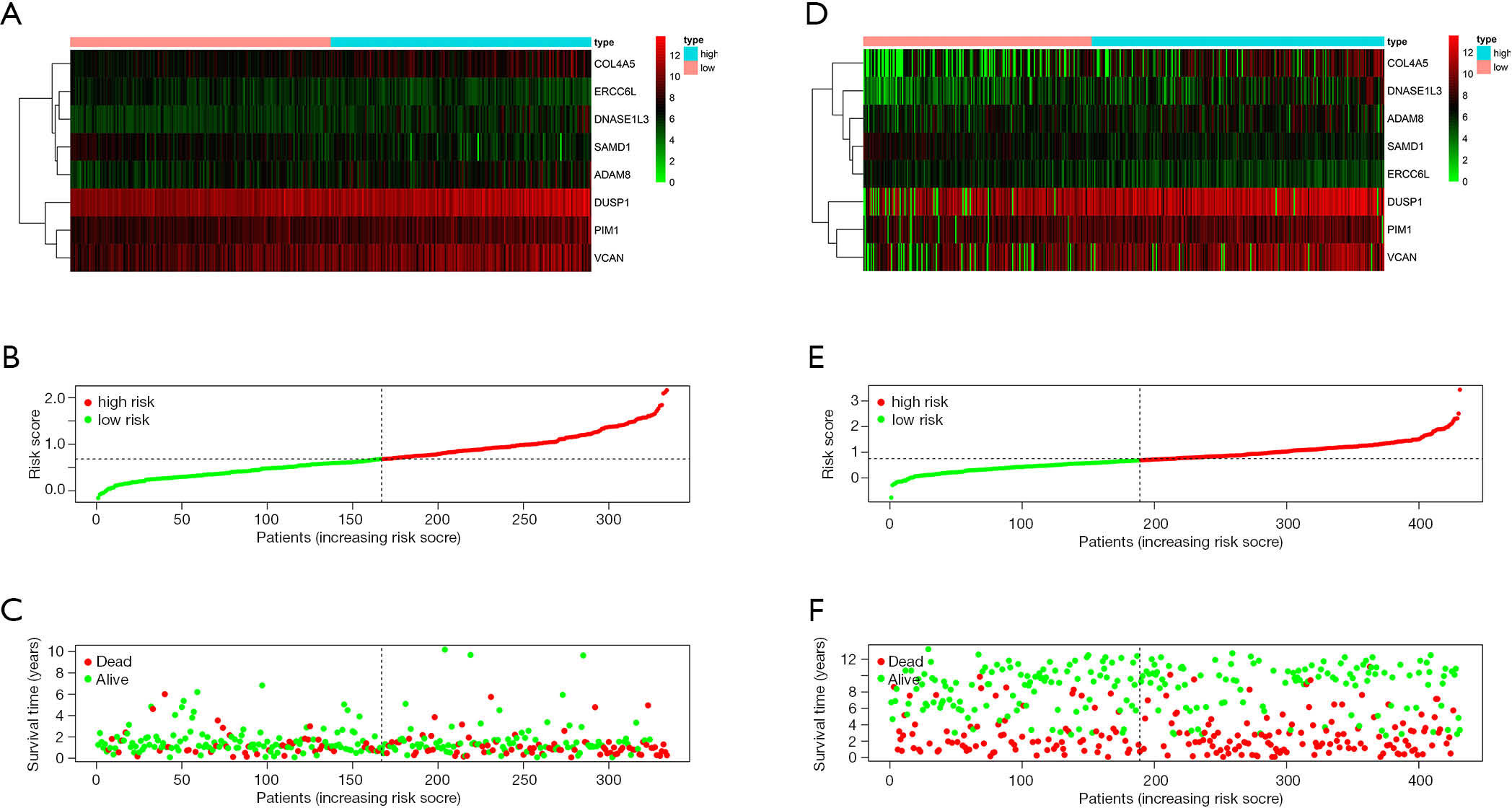 The clinical outcome of the prognostic model 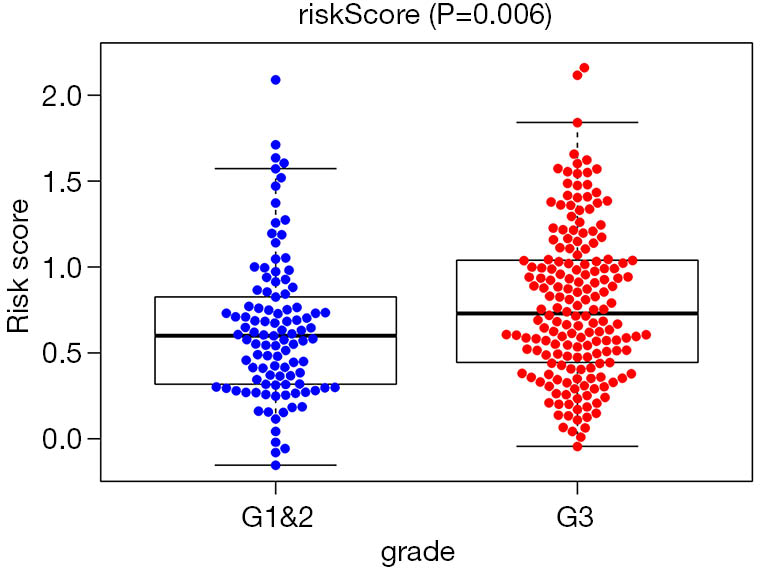 Figure 4 The relationship between TCGA risk score and grade.

Verification of the accuracy of the prognostic model

In order to visualize the predictive model, a nomogram was established based on the results of the Cox regression analyses (Figure 5A). The ROC curve analysis of the TCGA prognostic model is shown in Figure 5B. The area under the curve (AUC) was 0.700, which was higher than those of other prognostic variables. 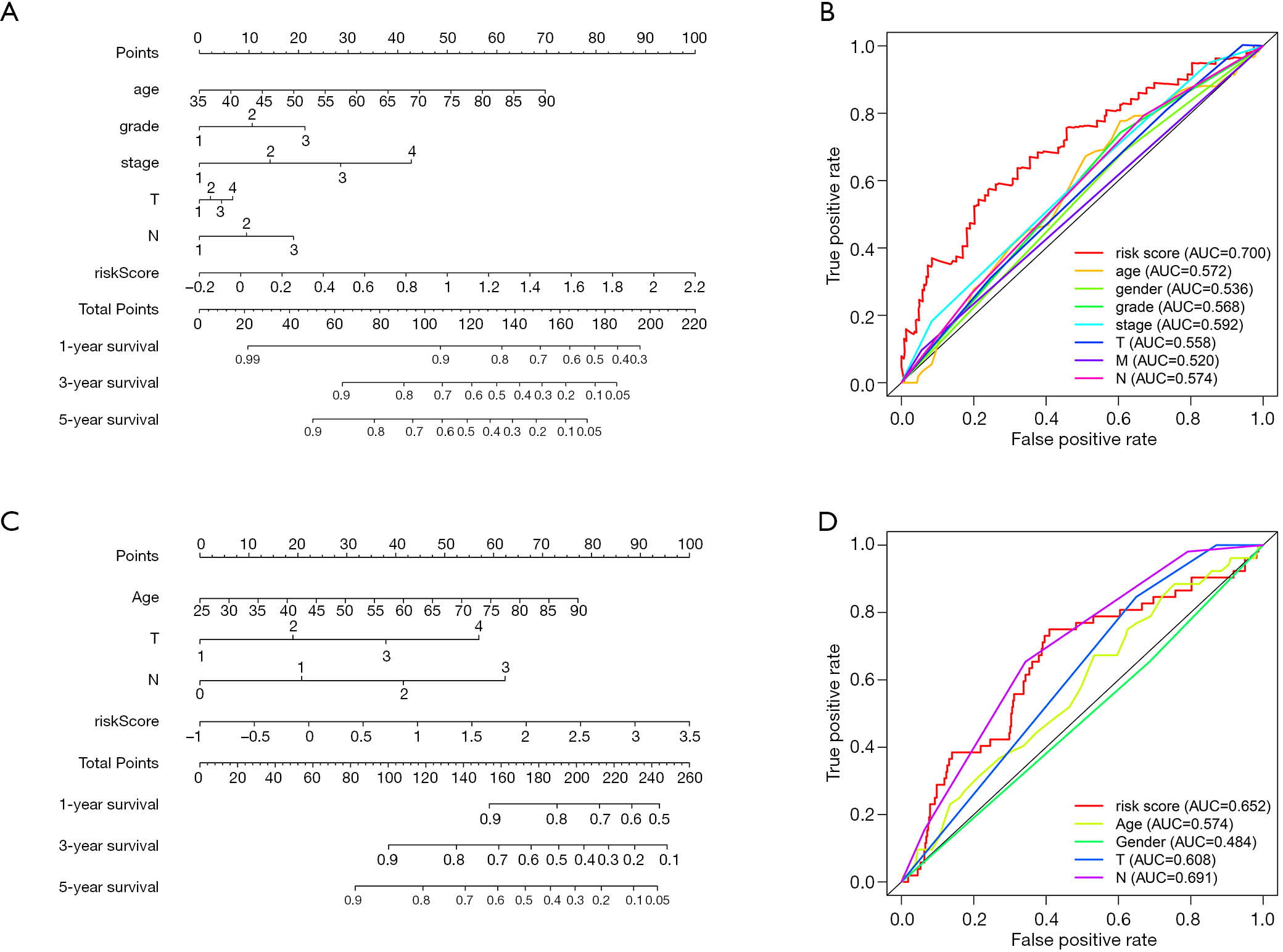 In the present study, we constructed a prognostic model on the basis of eight stemness-related genes. Patients with low-risk scores were found to have better OS than those with high-risk scores. Furthermore, we verified the feasibility of the prognostic model using the GSE84437 dataset obtained from the GEO database.

Previous studies have shown that certain genes and proteins are important for maintaining the characteristics of GCSCs. CD44 and Oct-4 can maintain the tumorigenesis, metastasis, and drug resistance of GCSCs (14). Tian et al. indicated that Sox2 can improve the colony formation of GCSCs and induce resistance to docetaxel (15). In our study, eight stemness-related genes were screened out to build our prognostic model. Some of these genes, such as SAMD1, DUSP1, PIM1, and VCAN, are known to be associated with various types of CSCs, and some are associated with other stem cells. Zhang et al. found that Uev1A-mediated SAMD1 ubiquitination induced osteosarcoma CSC differentiation and drug resistance (16). Boulding et al. pointed out that DUSP1 could promote breast cancer epithelial–mesenchymal transition (EMT) and maintain breast cancer stem cells (BCSCs) (17). Additionally, Mills et al. found that DUSP1 plays an important role in maintaining glioma stem cells (GSCs) (18). PIM1, a member of the PIM family, has crucial involvement in the maintenance of bladder CSCs and other stem cells (19). The expression of VCAN in bladder cancer CD24+CD44+ stem cells was found to be 46 times higher than that of CD24-CD44- cells. Among the genes mentioned above, DUSP1 (20,21) and PIM1 (22) are oncogenes in GC, and VCAN (23) and ADAM8 (24) are related to the clinical features of GC prognosis. These genes may be used as targets for the treatment of GCSCs. However, except for DUSP1, which is related to the drug resistance of GC, the mechanisms of these genes have rarely been studied.

In GC, researchers have found that the Wnt/β-catenin, sonic hedgehog (SHH), TGF-β, Notch, and other signaling pathways could help GCSCs to survive and self-renew (25,26). Through GSEA analysis, we found that most of the genes involved in the high-risk score patients are enriched in stemness-related pathways, such as the hedgehog, TGF-β, and JAK-STAT signaling pathways. In the low-risk score group, genes were enriched in the non-stemness pathways. A previous study has indicated that the expression of SHH and glioma-associated oncogene homolog 1 (GLI1) are increased in CD44+/Musashi-1+ GCSCs, and SHH contributes to the drug resistance of GCSCs (27). Xu et al. indicated that therapies targeting stem cells can achieve better results in high risk score patients via the BMX-ARHGAP JAK/STAT3 pathway.

An important reason for the recurrence and metastasis of GC is that radiotherapy and chemotherapy cannot completely eliminate these stem cells. In recent years, drugs targeting stem cells have been developed in clinical practice (28); however, the therapeutic effects have been unsatisfactory. Therefore, the development of more effective treatments targeting GCSCs is critical to improving the survival of patients with GC.

However, there were certain limitations in our research. Among the eight genes in our model, the mechanism of some genes in relation to GC and GCSCs is unknown, and some of these genes are mainly involved in normal stem cells. These genes need future research to elaborate their specific mechanisms. Moreover, it is possible that due to the different methods of gene expression measurement in different databases, the indicator values obtained from the GSE84437 dataset were lower than those from TCGA, which led to differences in median risk scores in different cohorts. Also, when applying our predictive model in a clinical setting, clinicians would have to use the same method of genetic measurement as that used in the TCGA database, which is another limitation of our model. Confirming the results of this study in a more suitable validation cohort will be the aim of our future investigations.

In summary, we analyzed the prognostic value of stemness-related genes in GC using the TCGA and GEO databases. Our study may provide potential targets for GCSCs, in order to eliminate GCSCs and improve the treatment sensitivity and outcomes for patients with GC.

Conflicts of Interest: All authors have completed the ICMJE uniform disclosure form (available at http://dx.doi.org/10.21037/tcr-20-2622). The authors have no conflicts of interest to declare.

Ethical Statement: The authors are accountable for all aspects of the work in ensuring that questions related to the accuracy or integrity of any part of the work are appropriately investigated and resolved. The study was conducted in accordance with the Declaration of Helsinki (as revised in 2013). All information from TCGA, GSEA and GEO is available and free for public, so the agreement of the medical ethics committee board was not necessary.