Liver cancer is the fifth and ninth most common cancer in male and female, respectively (1). It is the second leading cause of cancer-related death worldwide (1,2). In 2012, 782,500 newly diagnosed liver cancer cases and 745,500 deaths due to the same were estimated globally (2,3). Moreover, secondary liver cancer is more common than primary liver cancer (4-6).

The liver is one of the most common sites for organ-specific metastasis (7), which is mainly attributable to the organ-specific circulation pattern and distinct anatomy of microvessels (8). The liver has a unique dual blood supply system from both the portal vein and the hepatic artery, which increases the possibility of metastatic deposition. In addition, the sinusoidal hepatic endothelial layer is characterized by an incomplete covering of the microvessel structures (9); consequently, the extracellular matrix components are directly accessible to the circulating cells (9,10).

Although the global incidence and mortality rates of liver cancer are increasing, imposing a huge burden on the health care system (3), information regarding the epidemiology and clinical prognosis of secondary liver cancer is still limited. Using data from the Surveillance, Epidemiology, and End Results (SEER) database, we conducted a population-based analysis to comprehensively identify the epidemiological characters and prognostic factors of secondary liver cancer, to potentially help clinicians make better clinical decisions during pretreatment evaluation. We present the following article in accordance with the STORBE reporting checklist (available at http://dx.doi.org/10.21037/tcr-20-3319).

As the SEER database is publicly available, and the data used in this study did not include specific patient identifiers, the study did not require a review by the ethics committee. The SEER program is a premier source of cancer statistics in the United States and collects data from 18 population-based central cancer registries while covering 27–30% of the US population (11). SEER*Stat 8.3.5 (National Cancer Institute, MD, USA) software was used to extract the data. We identiﬁed 85,738 patients, whose liver metastases were synchronous to the primary tumor as secondary liver cancer patients diagnosed between 2010 and 2014. The study was conducted in accordance with the Declaration of Helsinki (as revised in 2013).

Kaplan-Meier analysis and log-rank test were used to estimate and compare the outcomes between different primary sites. Multivariate Cox regression models were conducted after adjusting for various covariates to assess the prognostic factors associated with OS and CSS. Hazard ratio (HR) with corresponding 95% confidence interval (95% CI) was used to show the effect of different variables on OS and CSS (12). All tests were two-sided, and P<0.05 was considered statistically significant. Statistical analyses were performed using SPSS version 21.0 (IBM Corp, Armonk, NY, USA).

A total of 85,738 patients with secondary liver cancer were included in our study. As shown in Table 1, majority of the secondary liver cancers originated from the digestive system (56.9%), and the six most common primary sites were the lung (25.9%), colorectum (21.4%), pancreas (19.6%), stomach (4.6%), breast (4.4%) and cecum (4.1%). When stratified by race, the first primary site was the lung for White and the colorectum for Black or Others patients. Interestingly, there was a significant number of male cases whose primary site was esophagus or stomach (male: female=10.5:3.7). 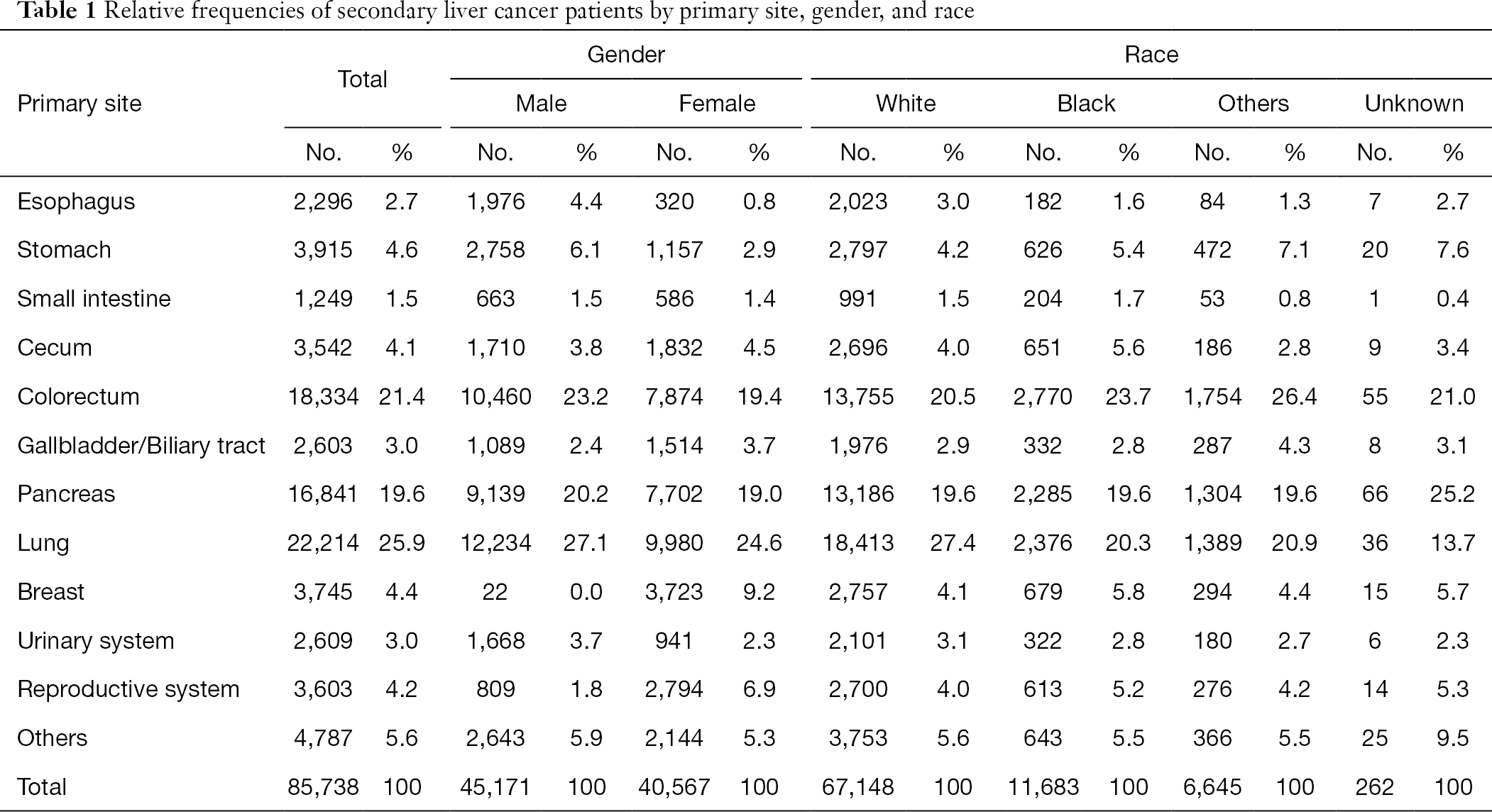 Considering that unspecific or unknown primary sites, as well as the shortage of cases could contribute as potential confounding factors, we only showed patient characteristics for those who had secondary liver cancer from the top six primary sites described above (Table 2). For patients with breast as the primary site, the proportion below the age of 40 was high. We also observed that patients, whose primary sites were the lung or breast, were more likely to have synchronous distant metastasis, especially bone metastasis. 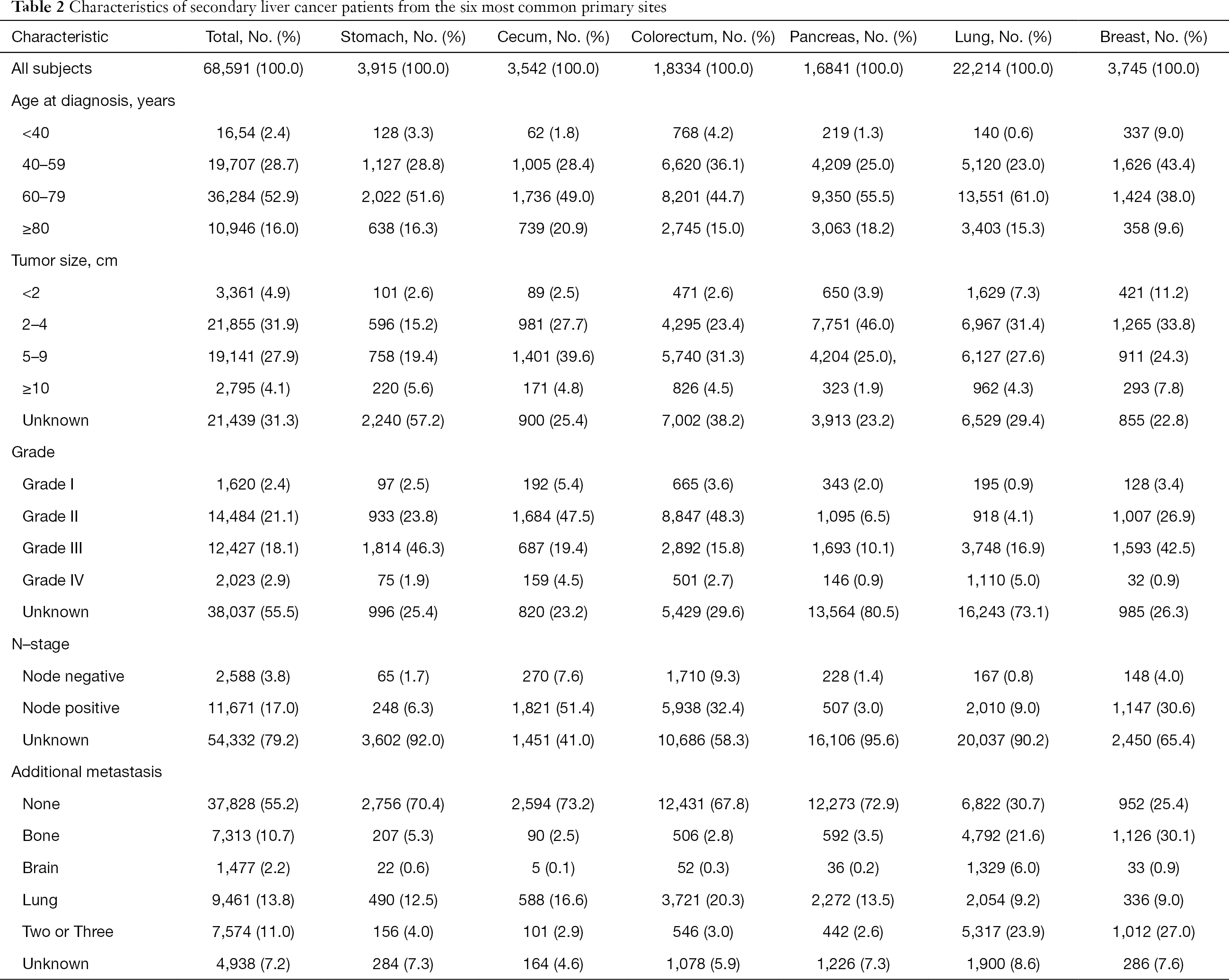 Among the total study population, the median and average OS were 3 months and 7.680±10.467 months, respectively, and that for CSS were 2 months and 5.820±8.015 months, respectively (Table 3). The OS and CSS Kaplan–Meier curves showed significant differences in survival outcomes according to primary sites (Figure 1). The median CSS of patients with the colorectum as the primary site was 6 months, which was greater than that of patients with other primary sites. Patients whose primary sites were the lung and pancreas had the worst median CSS of 2 months (Table 3).

Figure 1 Comparison of survival in secondary liver cancer patients according to specific primary sites. Kaplan-Meier analysis for overall survival (A) and cancer-specific survival (B).

Results of the multivariate analysis indicated that advanced age, male gender, black race, poor differentiation or lack of differentiation, and regional lymph node metastases were associated with poor prognosis (Table 4). Patients with the pancreas, lung or stomach as the primary site had a higher risk of poor outcomes. (Table 4). 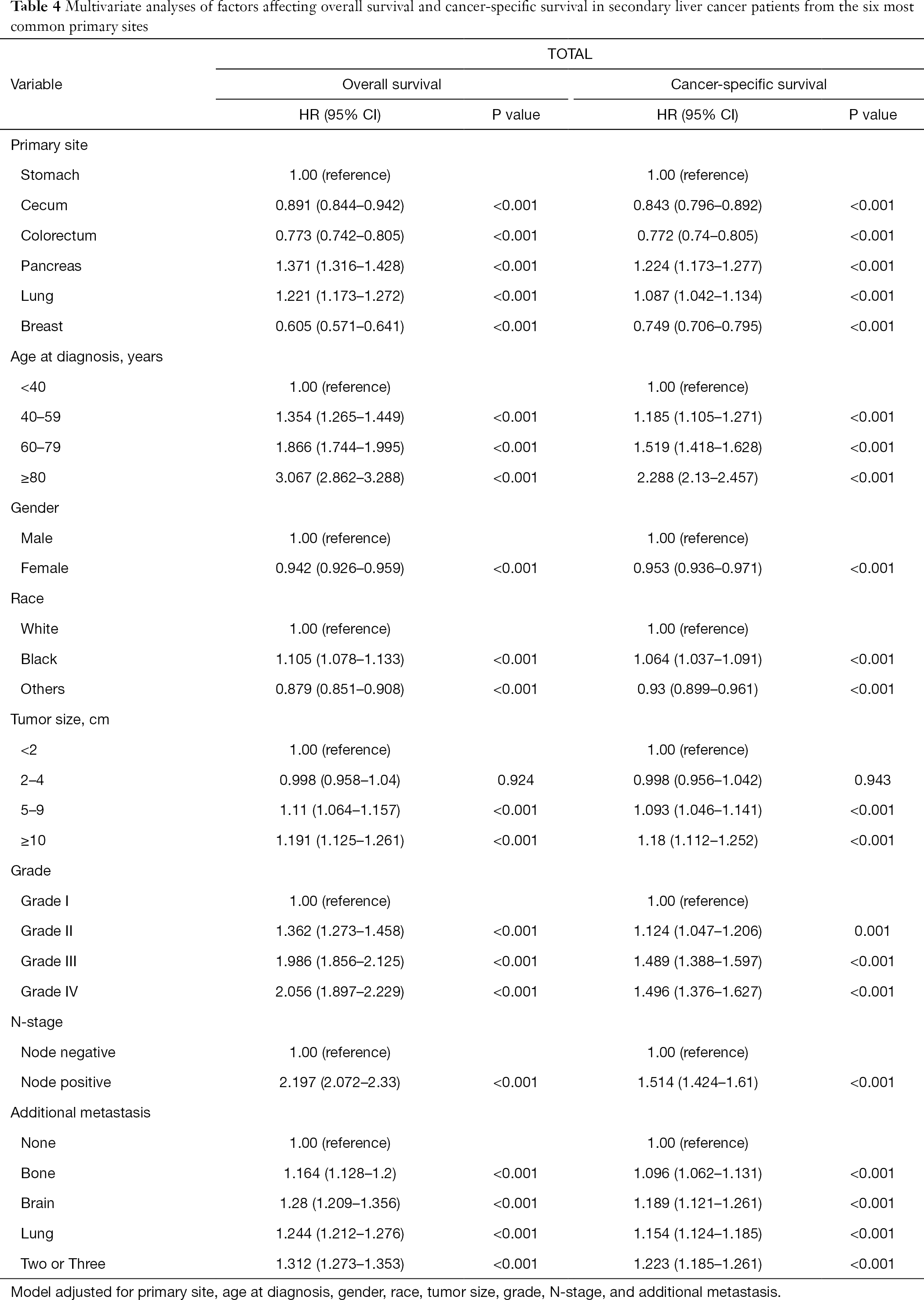 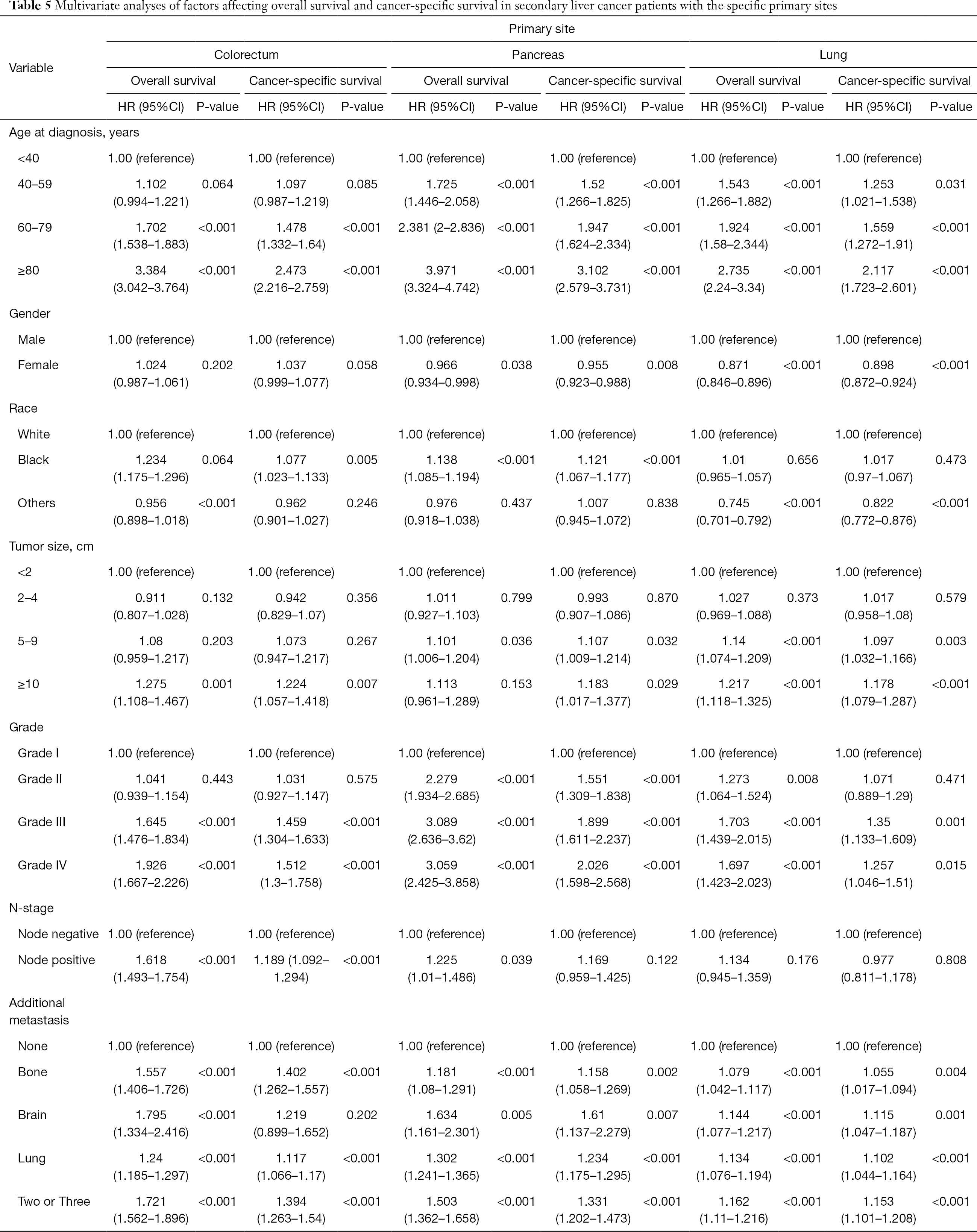 Population-based incidence and survival studies can provide valuable information for clinicians, researchers, and public health officials; these can also guide the direction of future research. In this study, we described the incidence, survival outcomes and prognostic factors of secondary liver cancer. Our findings indicate that the most common primary site was the lung, followed by the colorectum and pancreas, consistent with the findings of previous studies (6,13). However, Bosch et al. (14) established the breast as the most common primary site. This difference can be mainly attributed to the inclusion criteria set for study participants. Lung and pancreatic metastases are commonly synchronous, but breast metastasis tends to be metachronous (15,16). Moreover, the median disease-free interval before clinical liver metastasis for breast cancer patients is 20.2 months (16).

We found that advanced age, male gender, black race, poor differentiation or lack of differentiation, and regional lymph node metastases were associated with worse prognosis; however, the impact of race and tumor size were not obvious. Tumor size is closely correlated with the cancer stage at diagnosis (17). Generally, patients with small tumor size are asymptomatic, and computed tomography, magnetic resonance imaging, or positron emission tomography are not performed unless metastatic disease is suspected (5,18). Therefore, we speculate that patients with small tumors included in our study were diagnosed at an early stage due to their more severe clinical manifestations, which weakened the association between tumor size and prognosis. Nevertheless, liver function and other clinical indexes were not available during our study; hence, this speculation must be verified through further research.

Interestingly, we found that for secondary liver cancer patients deriving from colorectum, bone metastasis was a poor prognostic factor, as compared to metastases in other organs. Bone metastasis is very rare and the prognosis for colorectal cancer is poor (23-25). Moreover, numerous skeletal-related clinical events may occur in patients with bone metastasis, which decreases the patients’ functionality and quality of life (26,27). Early secondary liver cancer is asymptomatic, whereas bone metastasis is often symptomatic; therefore, bone metastasis could act as a warning signal during disease screening. We also found that for patients deriving from pancreas, brain metastasis was a poor prognostic factor. It is extremely rare in pancreatic cancer and only a few case reports exist for reference (28). In most of the reported cases, the disease had rapidly progressed, and the patients soon died after palliative treatment (28-30). Moreover, patients benefit poorly from surgical resection of brain metastases (30,31).

A current study reported that circulation patterns, extravasation barriers, and survival on arrival are three key determinants of the capacity of particular tumors to seed specific organs (32). Furthermore, the microenvironment, chemokines, and microRNAs are being widely investigated to reveal the molecular mechanisms of metastatic organ tropism (32-35). Based on our findings, we conclude that there may be interactions between synchronous distant metastases and the primary sites in secondary liver cancer, which influence its incidence and prognosis, and this conclusion provides clinical evidence for basic research.

The present study has some potential limitations. First, the SEER database did not include information on synchronous distant metastasis to specific organs until 2010; therefore, the follow-up period was not long enough. Second, we were limited to the information that the SEER database provided; hence, systemic therapy, other metastatic sites, and physical condition of patients that may relate to prognosis were not considered.

The authors acknowledge Xudong Yao for assistance in using the SEER*Stat 8.3.5 software, and the efforts of the National Cancer Institute.

Funding: This study was supported by a Fundamental Research Funds of Wuhan Municipal Health Commission grant to Yan-yan Chen (Grant NO: EX20B01).

Reporting Checklist: The authors have completed the STORBE reporting checklist. Available at http://dx.doi.org/10.21037/tcr-20-3319

Conflicts of Interest: All authors have completed the ICMJE uniform disclosure form (available at http://dx.doi.org/10.21037/tcr-20-3319). The authors have no conflicts of interest to declare.