In China, compared to all malignant tumors, the incidence and mortality of rectal cancer are high (1). In recent years, anti-vascular endothelial growth factor drug therapy has been considered to be an effective treatment after tumor chemotherapy resistance (2). However, the clinical efficacy of such anti-vascular endothelial factor growth drugs has not been consistent. The reason is that in addition to endothelial cells relying on blood vessels and tumor tissues, there are also mimic blood vessels that do not rely on endothelial cells. Some studies have found that anti-angiogenic therapy reduces blood vessel density, promotes the generation of hypoxia-inducible factors, and thereby induces the formation of vascular mimicry (VM) (3,4). VM refers to the formation of highly malignant tumor cells that simulate vascular endothelial cells through self-deformation and interact with extracellular matrix to simulate vascular wall structure. A system of ducts that transport blood (plasma, red blood cells) to reshape the tumor's microcirculation and connect with host blood vessels to provide the tumor with a blood supply. VM has been found in many solid tumors and is an important supplement to the classical blood supply of tumors. It can provide more blood supply and nutrients to tumor tissues and promote tumor growth. VM has the following characteristics: the vascular tubes formed are arranged in clusters or patterns; there was no vascular endothelial cell liner covering the tubes, and CD31/CD34 staining was negative in immunohistochemistry; it was surrounded by a lot of extracellular matrix such as laminin, fibritin and collagen, and it was positive for Perioacid-Schiff (PAS) staining (5,6). Due to the lack of endothelial cells, the VM structure is only a tubular structure surrounded by mucopolysaccharide components, which is convenient for tumor cells to invade. In addition, VM connects with endothelium-dependent blood vessels and is an important pathway for tumor cells to enter the blood circulation (7). Studies have shown that the formation of VM indicates the high aggressiveness of tumor cells, is closely related to the recurrence and progression of tumors, and suggests poor prognosis of tumors (8). Studies have found that in gastric cancer tissue, the expression of galectin-1 promotes the formation of gastric cancer VM, and suggests a poor prognosis for gastric cancer (9-11). There have been no relevant reports on VM generation in rectal cancer and its effect on prognosis of rectal cancer patients, nor has there been any relevant reports on whether Galectin-1, which regulates tumor endothelial cell-dependent angiogenesis, can regulate VM generation in rectal cancer. This study aims to investigate whether there is a correlation between VM and galectin-1 expression in rectal cancer tissues, analyze their predictive value in the prognostic evaluation of rectal cancer, and provide clinical indicators for the choice of postoperative treatment for patients with rectal cancer. We present the following article in accordance with the REMARK reporting checklist (available at http://dx.doi.org/10.21037/tcr-21-121).

The paraffin-embedded specimens of 94 patients who underwent rectal cancer surgery in the gastrointestinal surgery department of our hospital from January 2011 to December 2014 were selected from the gastrointestinal tumor biobank of our hospital. All selected patients received standard total mesorectal excision (TME) of rectal cancer, none of them had received neoadjuvant radiochemotherapy or biological therapy before surgery, no distant metastasis or other malignant tumors were found before surgery, and none of the patients had serious underlying diseases. According to the postoperative pathological results, patients with chemotherapy indications started XELOX (capecitabine and oxaliplatin) chemotherapy 4 weeks after the operation, and the total course of treatment was 6 months. The follow-up began after the patient was discharged from the hospital and ended in December 2019, with a clinical follow-up of 5 years. Table 1 shows the detailed clinical and pathological data of the selected patients.

Table 1 The relationship between galectin-1, VM, and clinicopathological characteristics after immunohistochemistry and CD34-PAS double staining of paraffin sections from 94 patients with rectal cancer
Full table

The study was conducted in accordance with the Declaration of Helsinki (as revised in 2013). The study was approved by Affiliated Hospital of Medical College of Yangzhou University (NO. TZRY-EC-18-012). All subjects were informed and signed the informed consent.

All formalin-fixed and paraffin-embedded tissues were subjected to immunohistochemical staining. The paraffin-embedded tissues were cut into 3 µm thick sections. The sections were deparaffinized in xylene and rehydrated in gradient ethanol. Endogenous peroxidase was blocked with 3% hydrogen peroxide in methanol for 10 minutes. The slices were washed 3 times with phosphate buffer solution and pretreated with citrate buffer solution (pH 6.0) in a microwave oven at 95 °C for 20 minutes to perform antigen thermal retrieval. Anti-galectin-1 primary antibody (1:200; Abcam, Cambridge, UK) was added to the slides and incubated overnight at 4 °C. Slides were rinsed with phosphate buffer for 3 minutes, then the slides were spun dry. The secondary antibody was added dropwise, and slides were incubated in a humidified atmosphere for 30 minutes. Slides were rinsed again with phosphate buffer for 3 minutes and dried, then DAB solution (1:50) was added for color development and incubated at room temperature for 10 minutes. The sections were washed and stained in hematoxylin for 5 minutes, and then washed under running water for 10 minutes. The sections were incubated in gradient alcohol and acetone, then coverslipped.

CD34 was stained using immunohistochemical staining. The process was the same as described in the previous section. The PAS staining kit was used for PAS staining. After the DAB reaction, the sections were treated with 0.5% PAS for 10 minutes, and washed with distilled water 3 times for 3 minutes, then stained with the Schiff reagent at 4 °C in the dark for 20 minutes. The colored sections were washed thoroughly with water and stained with hematoxylin for 5 minutes, then washed again with water for 10 minutes. The sections were incubated in gradient alcohol and acetone, then coverslipped.

Each specimen was subjected to immunohistochemical and CD34-PAS staining 3 times. The negative control (primary antibody omitted) was subjected to the same procedure. The reagent supplier provided a positive control. All slices were read by two senior pathologists using MPUS BX51 microscopes, and the diagnosis was completed independently. Galectin-1 staining was also scored according to the cell staining intensity: 0 points for unstained, 1 point for weak staining, 2 points for medium intensity staining, and 3 points for strong staining. Percentage scores of positive cells were also obtained according to the following criteria: 0 points for negative cells, 1 point for positive cells <25%, 2 points for 25–50%, 3 points for 50–75%, and 4 points for >75%. The product of the two scores was used as the final score of galectin-1 expression in rectal cancer tissue. Receiver operating characteristic (ROC) analysis was used to obtain the cutoff value of the galectin-1 immunohistochemical test score in rectal cancer tissue, so as to classify the test result as negative or positive.

The results of immunohistochemical double staining with CD34-PAS staining of 94 cases of rectal cancer tissues and corresponding adjacent tissues showed that VM was only found in rectal cancer tissues, and manifested as CD34-negative, PAS-stained duct-like structures, and the ducts contained red blood cells. Only endothelial cells with positive expression of CD34 and PAS were seen in the adjacent tissues, which depended on blood vessels, and no VM structures were seen.

SPSS 16.0 (SPSS, Chicago, IL, USA) was used for statistical analysis of all data. The t-test was used to compare the two groups. The Kaplan-Meier method was used for survival analysis, and the survival rates of the two groups were compared using the log-rank test. ROC analysis was used to estimate the galectin-1 immunohistochemical test scores in rectal cancer tissues (Figure 1A). The Cox regression model was used to analyze the risk factors affecting the overall survival of patients with rectal cancer. P<0.05 indicated that the difference was statistically significant. 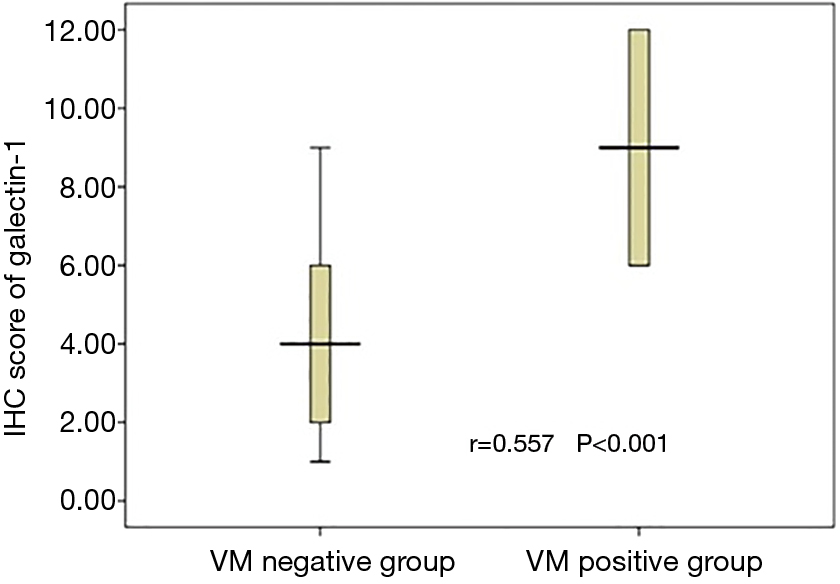 VM is found in many solid tumors, and the formation of VM structures also indicates poor prognosis (5,8). VM provides necessary nutrients for tumors and promotes tumor growth. Because the VM structure lacks endothelial cells, it is only a tube-like structure surrounded by mucopolysaccharide components, which is beneficial for tumor cells to invade. In addition, VM is connected with endothelium-dependent blood vessels, which is an important way for tumor cells to enter blood circulation (7). However, the impact of VM on the prognosis of patients with rectal cancer is still controversial (20,21). Previous studies have shown that VM structure formation is not closely related to the prognosis of patients with rectal cancer (22). In this study, we performed CD34-PAS immunohistochemical double staining of 94 rectal cancer samples and found that 19 (20.2%) were VM positive. Our research results showed that VM structure formation was closely correlated with clinically poor prognostic factors such as tumor differentiation, tumor clinical stage, lymph node metastasis, and intravascular tumor thrombus. Kaplan-Meier survival analysis also confirmed that the overall survival rate of patients in the VM positive group was significantly lower than that in the VM negative group, and the Cox multi-factor regression analysis showed that VM structure formation was an independent factor affecting the prognosis of patients with rectal cancer.

Reporting Checklist: The authors have completed the REMARK reporting checklist. Available at http://dx.doi.org/10.21037/tcr-21-121

Conflicts of Interest: All authors have completed the ICMJE uniform disclosure form (available at http://dx.doi.org/10.21037/tcr-21-121). The authors have no conflicts of interest to declare.

Ethical Statement: The authors are accountable for all aspects of the work in ensuring that questions related to the accuracy or integrity of any part of the work are appropriately investigated and resolved. The study was conducted in accordance with the Declaration of Helsinki (as revised in 2013). The study was approved by Affiliated Hospital of Medical College of Yangzhou University (No. TZRY-EC-18-012). All subjects were informed and signed the informed consent.