The role of tolvaptan in managing hyponatremia in small cell lung cancer patients with SIADH: a retrospective study of 23 cases

SIADH is characterized by excessive unsuppressible release of antidiuretic hormone (4), unlike the concept of SIADH, the syndrome of inappropriate antidiuresis (SIAD) is a disorder of sodium and water balance characterized by urinary dilution impairment and hypotonic hyponatremia, in the absence of renal disease or any identifiable non-osmotic stimulus able to induce ADH release (5). The main clinical manifestation of SIADH is hyponatremia or a high urinary sodium concentration; hyponatremia occurs in approximately 15% of SCLC patients (6), which can be ascribed to SIADH in 60% of cases (7). Hyponatremia is defined as plasma sodium lower than 135 mmol/L. According to the level of serum osmotic pressure, hyponatremia can be divided into hypertonic (>295 mOsm/kg), isotonic (275–295 mOsm/kg), and hypotonic (<275 mOsm/kg) conditions. Clinical symptoms include weakness, nausea and vomiting, headache and drowsiness, muscle pain and spasms, neuropsychiatric symptoms, and reversible ataxia, which depends on plasma sodium concentration (8). Hyponatremia is thought to be a negative prognostic factor in cancer patients based on a systematic analysis of published studies (7,9,10). Hyponatremia and SIADH increase disease burden, prolong hospitalization, delay scheduled radiochemotherapy, and worsens patient Eastern Cooperative Oncology Group performance status (ECOG-PS) (11,12).

SIADH-related hyponatremia can be improved with tumor regression through effective antitumor therapy, but poor performance status limits the possibility of chemoradiation. Recently, guidelines for managing hyponatremia in cancer patients have been established by several international panels (5,13,14). These guidelines suggest that treatments for SIADH-related hyponatremia include fluid restriction, hypertonic saline, loop diuretics, isotonic saline, and tolvaptan. Only 5–14% of patients achieved plasma sodium levels above 130 mmol/L via fluid limitation and hypertonic saline; however, those therapies were often ineffective and sometimes even aggravated hyponatremia (15).

The SALT trials demonstrated the efficacy and safety of tolvaptan therapy in patients with hyponatremia resulting from multiple diseases, including SCLC with SIADH (16). However, the SALT trials did not show the SCLC subgroup results, and the clinical outcomes have not been reported. Previously, a prospective case series revealed that SCLC patients with SIADH responded well to 15 mg of tolvaptan per day, and no serious adverse events or neuropsychiatric deficits were observed (17). However, three studies have reported that a 15 mg dose of tolvaptan can overcorrect plasma sodium (18-20), and instead recommended an initial tolvaptan dose of 7.5 mg for patients with SIADH. Additionally, pharmacodynamic studies performed by tolvaptan manufacturers have shown that 3.75 mg can increase both urine output and plasma sodium levels (21).

To date, the largest study using tolvaptan to manage hyponatremia is SCLC patients with SIADH included only 10 patients (17). The remaining studies are case reports, and the most appropriate initial dose of tolvaptan has not been identified. To investigate the role of tolvaptan in managing hyponatremia in SCLC patients with SIADH in China and investigate the appropriate initial dose and clinical outcomes, we retrospectively reviewed 23 patients in our hospital. We present the following article in accordance with the STROBE reporting checklist (available at http://dx.doi.org/10.21037/tcr-20-2123).

After treatment, all patients were followed up through telephone interview every 3 months until death or last follow-up (2019/12/15).

Statistical analysis was performed with SPSS software (version 20.0; SPSS Inc., Chicago, IL, USA). Quantitative data are expressed as the mean ± standard deviation; qualitative data are shown as n (%). Exploratory analyses were performed to characterize the differences between the 3.75 mg group and the above 3.75 mg group. The correlation of categorical covariates was evaluated by Fisher’s exact test, and the differences in continuous covariate models were evaluated by Student’s t-test. One-way analysis of variance (ANOVA) was used to assess plasma sodium levels according to different interventions. Overall survival was determined as the time from the date of SCLC diagnosis until death from any cause or the last follow-up. Then, the study used the Kaplan-Meier method to calculate overall survival and draw the survival curve. A P-value of less than 0.05 indicated statistical significance. 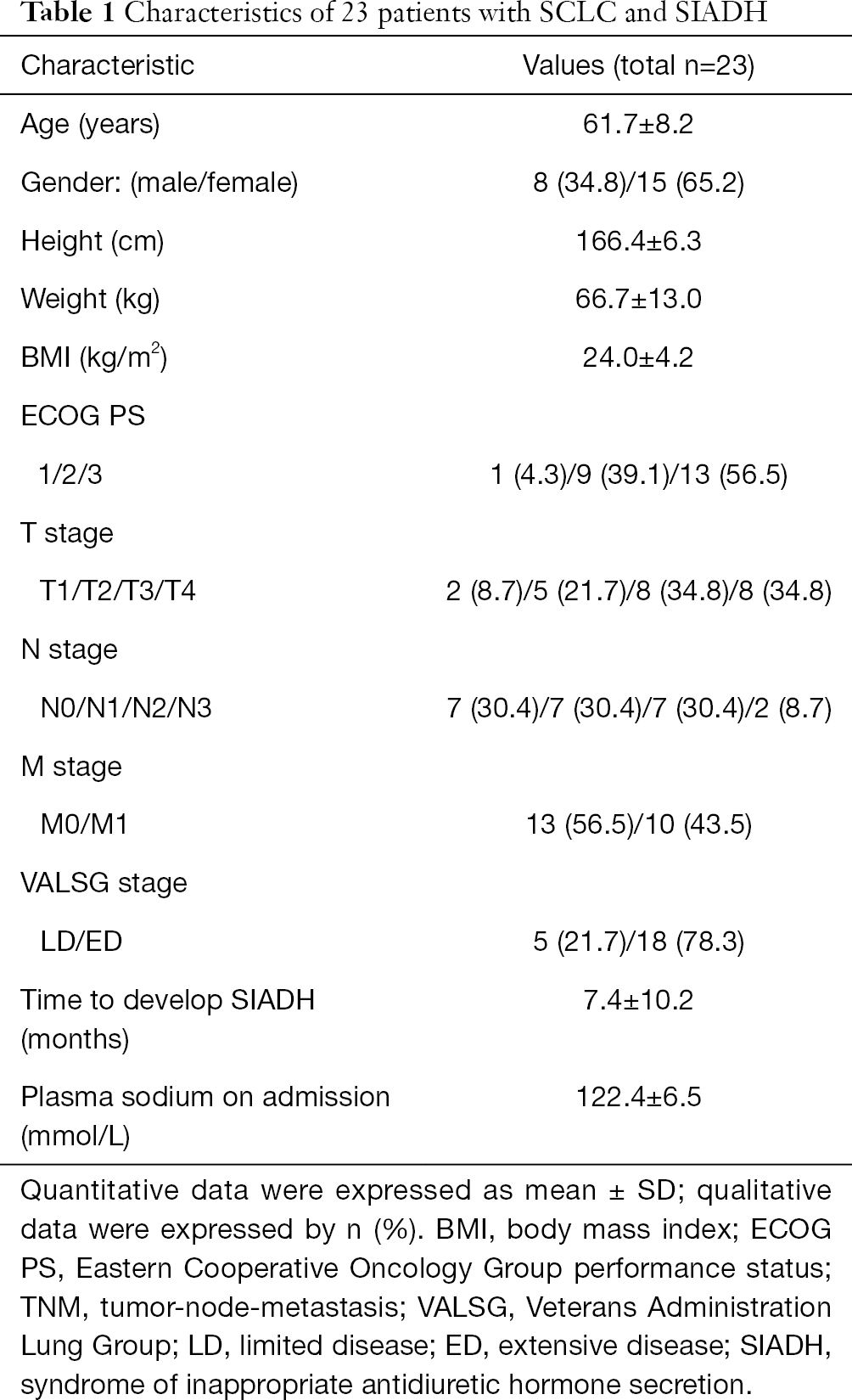 The effect of hyponatremia correction and survival on SCLC patients

Table 2 The effect and safety of hyponatremia correction
Full table

Figure 1 The effect of hyponatremia correction. (A) Distribution of ECOG PS scores in patients at different periods. (B) Comparison of serum sodium at the time of admission, before tolvaptan treatment, and three days after tolvaptan treatment showed that patients had significantly higher plasma sodium after 3 days of tolvaptan treatment. *, P<0.05. ECOG PS, Eastern Cooperative Oncology Group performance status.

The median OS was 14.1 months (Figure 2). The median follow-up time was 13 months (range, 3.8–30.0 months), and five patients were alive at the end of follow-up. No patient died from hyponatremia. 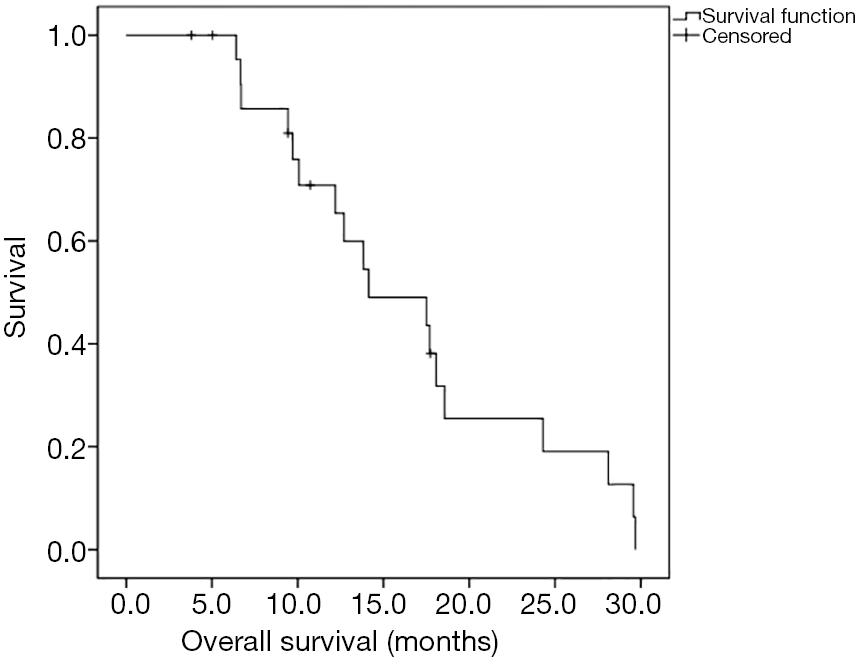 Hyponatremia related to SIADH is an essential complication in SCLC patients. In China, tolvaptan was indicated for clinically significant euvolemic and hypervolemic hyponatremia, including patients with heart failure, liver cirrhosis, and SIADH (22). In recent decades, many studies have shown Tolvaptan to be effective in correcting plasma sodium (11-16). Petereit et al. (17) summarized the characteristics of 10 patients with SCLC and SIADH in the largest observational study that we found. To the best of our knowledge, our study is the largest monocentric series of SCLC patients with SIADH. Our study found that tolvaptan at a dose of less than 15 mg is safe and effective for most patients. We also observed dose-related effectiveness and safety issues in individual patients. In addition, patient survival may benefit from tolvaptan treatment.

In most cases, SIADH associated with SCLC arises from the ectopic release of ADH/ADH‐like substances from tumor cells (23). Hyponatremia secondary to cancer may persist for a long time in the absence of effective antitumor therapies to reduce the tumor burden. In addition, some studies have confirmed that hypertonic saline may be ineffective for SIADH treatment and may even exacerbate hyponatremia (15,24). Petereit et al. demonstrated the effectiveness of tolvaptan in correcting hyponatremia in SCLC patients with SIADH, where the plasma sodium levels increased significantly in the majority of patients within four days (17); although two patients still needed more than 10 days of treatment. In our retrospective study, only one patient was successfully treated with hypertonic saline. The mean time to correct plasma sodium after tolvaptan treatment was 3.7±5.8, and after 3 days of tolvaptan treatment, the mean plasma sodium level was 136.0±4.1 mmol/L; however, one patient took 30 days of treatment to correct hyponatremia. Whether this was due to the lower dose of oral tolvaptan (5 mg) requires further investigation.

A post-marketing evaluation of tolvaptan in Europe found that doctors often split or crush the tablets to make a lower initial dose. Manufacturers’ pharmacodynamic studies have shown that both 3.75 and 7.5 mg doses can increase urine output and increase plasma sodium levels, while the 7.5 mg dose can lead to overcorrection (21). No difference was found in our study between the 3.75 mg group and the above 3.75 mg group, our research indicates that 3.75 mg is the proper initial dose of tolvaptan in treating SCLC with SIADH.

Interest in the initial dose has focused on sodium overcorrection in hyponatremic patients treated with 15 mg tolvaptan. Two guidelines recommended that a limit to hyponatremia correction is an increase in sodium concentration of <10–12 mmol/L in 24 h and of <18 mmol/L in 48 h (13,28). Overcorrection of hyponatremia is defined as a rapid increase in plasma sodium concentration, which can lead to severe complications such as osmotic demyelination syndrome (ODS) associated with high patient mortality (28).

In our study, the PS of the majority of patients improved during tolvaptan treatment. Improving the performance status of cancer patients allows patients to receive radiotherapy and chemotherapy on time. The negative effects of delayed treatment could thus be avoided. However, it is unclear whether this effect can bring survival benefits. The presence of hyponatremia is a factor associated with poor prognosis of SCLC. From a retrospective study involving 395 SCLC patients, Hermes et al. concluded that the hyponatremia subgroup showed poor median survival (9.0 vs. 13.0 months, P<0.001) when compared to that of the normal sodium subgroup (38). Similar conclusions were drawn in another retrospective study involving 453 SCLC patients conducted by Hansen et al., in which the hyponatremia subgroup showed worse median survival (7.1 vs. 11.2 months, P=0.0001) (7). In our study, the median survival of patients after the administration of tolvaptan was 14.1 months. This median survival seems longer than the previously reported values ranging from 7.1 to 13.0 months (7,38). No survival data on patients with SCLC and SIADH treated with oral tolvaptan can be compared, and we cannot rule out the possibility that this discrepancy is due to insufficient sample size.

This study has the following limitations: first, the use of tolvaptan in China has not yet become widespread, resulting in a small sample size; second, because this was a retrospective study, time data were not accurate to the hour; third, the data were summarized from a single institution, making it difficult to form general conclusions. We suggest a series of remedy, multicenter, prospective, randomized controlled experiments in future studies.

In summary, our study shows that using a dose of tolvaptan lower than 15 mg is effective in stabilizing sodium levels for most patients. There is a risk of overcorrection of plasma sodium when using 15 mg of tolvaptan. Tolvaptan can quickly improve the performance status of patients, which may bring survival benefits to patients. The effect of tolvaptan on SCLC patients with SIADH should be confirmed.

We would like to thank Alvin Han, undergraduate student, Department of Biochemistry and Biomedical Sciences, McMaster University, for his editing on written expression and grammar of this manuscript.

Reporting Checklist: The authors have completed the STROBE reporting checklist. Available at http://dx.doi.org/10.21037/tcr-20-2123

Conflicts of Interest: All authors have completed the ICMJE uniform disclosure form (available at http://dx.doi.org/10.21037/tcr-20-2123). The authors have no conflicts of interest to declare.

Ethical Statement: The authors are accountable for all aspects of the work in ensuring that questions related to the accuracy or integrity of any part of the work are appropriately investigated and resolved. The study was conducted in accordance with the Declaration of Helsinki (as revised in 2013). The study was approved by Qilu Hospital, Cheeloo College of Medicine, Shandong University (approval No. KYLL-2020-467). and individual consent for this retrospective analysis was waived.