Primary intramedullary melanocytoma in the thoracic cord: a case report and literature review

Meningeal melanocytoma is a rare pigmented neoplasm of the central nervous system (CNS) first described in 1972 by Limas and Tio (1). Melanocytomas are derived from scattered melanocytes that are present in the leptomeninges. As for intraparenchymal melanocytomas, the melanocytes most probably originate from the Virchow-Robin spaces (2). In the spinal cord, most cases of meningeal melanocytomas are detected as intradural extramedullary lesions (3-5). The spine’s primary intramedullary lesion is an extremely rare entity, with only 25 cases reported previously (2,4-18). Herein we report a case of primary intramedullary melanocytoma (PIM) in the thoracic cord in a 56-year-old man. In addition, the available literatures are reviewed. In this study, we presented a case of PIM and reviewed its clinicopathological features, imaging features, therapeutic strategies and prognosis to provide helpful information in the diagnosis and treatment of PIM. This study deepens our understanding of the clinical and imaging features of PIM. We present the following article in accordance with the CARE reporting checklist (available at https://tcr.amegroups.com/article/view/10.21037/tcr-21-2132/rc).

A 56-year-old man presented with weakness and numbness in both legs for 3 years. The symptoms of weakness and numbness in both legs were aggravated for 10 months with walking unsteadily and sometimes falling over. Then, he was admitted to the department of neurosurgery in our hospital. The patient had a history of hypertension for 4 years and recently took Irbesartan to control blood pressure. Physical examinations on admission were as follows: soft neck with no resistance, grade IV muscle strength of both two lower extremities, grade V muscle strength of both two upper extremities, normal muscle tension, decreased pain, warmth, and touch sensation of both lower extremities below inguinal level, and negative bilateral pathological signs.

Magnetic resonance imaging (MRI) of the thoracic cord revealed an intramedullary mass, sized 8.0 cm ×1.0 cm ×1.0 cm, within the spinal canal. The lesion occupied nearly 100% of the spinal canal at the level of T10–T12 (Figure 1). The mass was T1 hyperintense (Figure 1A) and T2 hypointense (Figure 1B). On the contrast-enhanced T1-weighted image (T1WI), the mass signal was similar to the mass signal on the unenhanced T1WI. Therefore, there was an uncertain enhancement on the contrast-enhanced T1WI (Figure 1C,1D). There was a small amount of edema above the mass in the spinal cord, as evidenced by T2 hyperintensity (Figure 1B). A cavernous malformation with subacute hematoma was considered as the initial diagnosis. In addition, intramedullary melanoma ependymoma, astrocytoma, and schwannoma were considered the differential diagnosis. 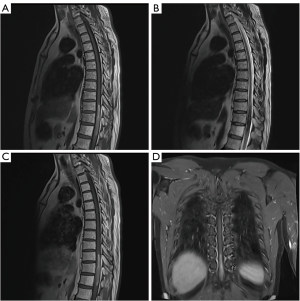 Figure 1 MRI revealed an intramedullary mass in the thoracic cord. The lesion occupied nearly 100% of the spinal canal at the level of T10–T12. The mass was T1 hyperintense (A) and T2 hypointense (B). On the contrast-enhanced T1-weighted image (C,D), the mass signal was similar to that on unenhanced T1WI (A). Therefore, there was an uncertain enhancement on the contrast-enhanced T1WI (C,D). T1WI, T1-weighted image; MRI, magnetic resonance imaging.

A T10–T12 laminectomy was performed. The dura mater and arachnoid sheath were opened longitudinally. The spinal cord was opened along the posterior median sulcus to expose the intramedullary tumor. The tumor invaded deeply into the spinal cord and had an unclear boundary. And intraoperative frozen pathology did not determine the benign or malignant tumor. Thus, near-total resection of the tumor was performed.

Histological staining with hematoxylin‑eosin showed that the tumor cells were arranged around the vascular axis, with poor adhesion, abundant melanin granules in the cytoplasm, large cell nuclei, and large nucleoli (Figure 2A). After depigmentation, large cell nuclei and nucleoli were more obvious (Figure 2B). Immunohistochemical staining showed the tumor cells were positive for HMB45 (Figure 2C), Melan A (Figure 2D), and negative for S-100, P53, BRAF. The Ki-67 proliferation index was low (5%) in tumor cells. A diagnosis of PIM in the thoracic cord was finally determined. 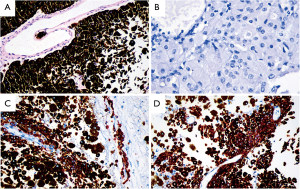 Figure 2 The patient’s microscopic pathological and immunohistochemical results. (A) Histological staining showed that the tumor cells were arranged around the vascular axis, with poor adhesion, abundant melanin granules in the cytoplasm, large cell nuclei, and large nucleoli (HE, ×200). (B) After depigmentation, the large cell nuclei and nucleoli were more obvious (×400). Immunohistochemical staining showed the tumor cells were positive for HMB45 (C) and Melan A (D) (×200).

Postoperative muscle strength of the patient’s right lower extremity was grade 2, and left lower extremity muscle strength was grade 1. There was no muscle tension reduction in the extremities and no obvious abnormalities in the deep and shallow sensation. Moreover, bilateral Babinski signs were negative. Postoperative MRI indicated effusion in the operative region (Figure 3A,3B). The patient was discharged six days later after surgery. After a follow-up of 17 months, the patient had no signs of recurrence or metastasis. The timeline of the diagnosis, treatment, development, and prognosis is shown in Figure 4.

Figure 4 The timeline of management.

All procedures performed in this study in accordance with the ethical standards of the institutional and/or national research committee(s) and with the Helsinki Declaration (as revised in 2013). Written informed consent was obtained from the patient for publication of this case report and accompanying images. A copy of the written consent is available for review by the editorial office of this journal. The study protocols were approved by the ethics committee of our hospital (No. 2021-0013).

Primary CNS melanocytoma is a rare disease that originates from melanocytes located in the leptomeninges (19) and is considered a benign neoplastic lesion. Tumors of the same origin range from well-differentiated melanocytoma to malignant melanoma, and their prognosis is quite different. According to the classification of tumors of the CNS by the World Health Organization (WHO) (20), primary melanocytic lesions are classified into four categories, including melanocytosis, melanocytoma, malignant melanoma, and meningeal melanomatosis. Melanocytoma is more common in the spinal cord than in the brain. In the spinal cord, primary melanocytoma is more likely to occur in the cervical and thoracic regions, usually presented as an extramedullary intradural lesion (21). However, primary melanocytoma is rarely presented as an intramedullary region, with only 25 cases reported previously (Table 1) (2,4-18). In this study, we present a comprehensive description of PIM, including its clinical and radiological features.

The clinical symptoms of melanocytoma patients are generally caused by the tumor's compression, including lower limb movement disorders, numbness, paresthesia, hypoesthesia, abnormal stool, and urine, etc., which are related to the location of the compression and the size of the tumor (22). Root pain is less common in the intramedullary melanocytoma than the extramedullary epidural melanocytoma.

Radiological examinations can show the location, extent, interior features, and the tumor’s compression on the spinal cord. MRI is the preferred method for the evaluation of spinal cord tumors. PIM is characterized by a high signal on T1WI and a low signal on T2WI (23,24), which may be related to the paramagnetic free radicals generated by a large amount of melanin and hemorrhage in the melanocytoma (25). By contrast, a non-melanotic tumor is low signal on T1WI and high signal on T2WI, which helps differentiate melanotic from non-melanotic lesions, such as ependymoma, astrocytoma, and schwannoma. Despite this imaging feature of melanocytoma, it is difficult to distinguish from subacute hematoma caused by hemorrhage of intramedullary cavernous malformation. In the present case, a cavernous malformation with subacute hematoma was initially considered in the diagnosis. However, the hemorrhage often appears as a sudden onset, and the imaging manifestations and symptoms can be gradually recovered with the absorption of the hematoma. Although the intramedullary melanocytoma reveals specific imaging characteristics, the final diagnosis depends on postoperative pathology and immunohistochemistry.

According to the previous case reports (Table 1), surgical resection is the primary treatment for melanocytoma (2,4-18). Although melanocytoma is a benign tumor, it may recur after complete resection, and it may also invade surrounding tissues after surgery (26). This tumor’s high recurrence risk and aggressive behavior (13) suggest the need for continuous close follow-up. The tumor should be resected entirely as far as possible, and adjuvant radiotherapy is recommended for patients with total or partial resection, which can prevent tumor recurrence and significantly improve prognosis (22,27).

In summary, MRI is the preferred method for the evaluation of PIM. PIM is characterized by high signal on T1WI and low signal on T2WI. This imaging feature can help differentiate melanotic from non-melanotic lesions, such as ependymoma, astrocytoma, and schwannoma. Due to its rarity, it is difficult to make the differential diagnosis from cavernous malformation with hematoma before surgery. However, the symptoms are not sudden but gradually worsened over a relatively long period in the PIM patients, which is an essential difference from the cavernous malformation with hematoma. Therefore, PIM should receive diagnostic consideration for an intramedullary lesion that is high signal on T1WI and low signal on T2WI in a patient with gradually worsened symptoms rather than sudden onset. It is of great importance for neurosurgeons and radiologists to recognize the characteristics of this disease, make the correct diagnosis in time and avoid delayed treatment.

The authors would like to thank the efforts of Yeerfan Jiaerken for revising the language.

Reporting Checklist: The authors have completed the CARE reporting checklist. Available at https://tcr.amegroups.com/article/view/10.21037/tcr-21-2132/rc

Conflicts of Interest: All authors have completed the ICMJE uniform disclosure form (available at https://tcr.amegroups.com/article/view/10.21037/tcr-21-2132/coif). The authors have no conflicts of interest to declare.

Ethical Statement: The authors are accountable for all aspects of the work in ensuring that questions related to the accuracy or integrity of any part of the work are appropriately investigated and resolved. All procedures performed in this study in accordance with the ethical standards of the institutional and/or national research committee(s) and with the Helsinki Declaration (as revised in 2013). Written informed consent was obtained from the patient for publication of this case report and accompanying images. A copy of the written consent is available for review by the editorial office of this journal. The study protocols were approved by the ethics committee of our hospital (No. 2021-0013).