Lung cancer is one of the most common carcinomas worldwide, with the highest rate of mortality and morbidity in both men and women (1). There are several categories of lung cancer according to pathological features, and non-small cell lung cancer (NSCLC), including lung adenocarcinoma and lung squamous carcinoma, represents almost 90% of all lung cancers (2). In the past few decades, the incidence of lung adenocarcinoma has surpassed that of lung squamous carcinoma to become the most common clinical type of NSCLC (3,4). Despite the development of therapeutic treatments for lung cancer patients, the 5-year relative survival rate remains unsatisfactory (5), with a reported 30% survival rate in primary lung cancer patients and less than 10% survival in metastatic lung cancer patients (6). Consequently, the development of new and more effective treatment methods for lung cancer is urgently needed.

Increasingly, studies have indicated that the biological mechanisms in lung cancer are caused by multiple factors working synergistically (7,8). Among them, genomic abnormalities are a crucial factor that cannot be ignored, especially in lung adenocarcinoma (9). Indeed, a deep sequencing study has demonstrated complex and wide heterogeneity in the lung cancer genome (10). With an increasing number of studies showing that immune infiltration is closely related to the development of lung adenocarcinoma, the direction for lung cancer treatment has changed and is now focused on individualized therapy according to the identification of immune-related biomarkers with obvious genetic abnormalities (11,12). With these discoveries, targeted therapy has been widely used in the clinic and is now defined as an important standard for clinical treatment in lung cancer patients (13). Consequently, the survival rate of some lung cancer patients has been moderately but steadily improved. Therefore, exploring new tumor biomarkers is particularly important for individualized therapy of lung adenocarcinoma patients.

Bioinformatics analysis is a fast and useful method for examining how all the molecular discoveries relevant to one patient can be applied to others (14). Generalization and summarization of key biological information based on comprehensive multisource data and biological networks can provide certain scientific evidence to support early diagnosis and individual medicine of disease. With bioinformatics research, molecular and genetic information of diseases can be well connected and further evaluated to understand the etiology of diseases, revealing the importance and complexity of multilevel research in disease progression, diagnosis, and individualized therapy.

The study was conducted in accordance with the Declaration of Helsinki (as revised in 2013). Public databases were analyzed to screen the genes associated with lung adenocarcinoma. The following databases were used: (I) GeneCards (https://www.genecards.org/), which provides comprehensive information related to human genes, RNA, protein, and functional information from a wide variety of related websites (15); (II) Comparative Toxicogenomics Database (CTD, http://ctdbase.org/), which includes genomic, environmental, as well as chemical factors that may play major roles in human health, and assesses the relationship between disease pathogenesis and environmental factors (16); and (III) DISEASES (https://diseases.jensenlab.org/Search), which is a large and comprehensive database for disease-gene association studies, and information involving the genomic data of cancer and other diseases is integrated by the collection and analysis of public data (17). The top 500 genes found in these 3 public databases to be associated with lung adenocarcinoma were gathered for further analysis.

Bioinformatics analysis was conducted for all the common genes from the three public databases. GeneMANIA (http://genemania.org/) was used for functional analysis of the interaction network. GeneMANIA can be used to predict the functions of target genes and evaluate the prioritization of genes. Enrichment analysis including Kyoto Encyclopedia of Genes and Genomes (KEGG) and Gene Ontology (GO) were performed to estimate the molecular biological functions of common genes, including biological processes (BPs), cellular components (CCs), and molecular functions (MFs).

WebGestalt (http://www.webgestalt.org/) was used to identify the hub genes associated with lung adenocarcinoma from the common genes screened from the three public databases. The WebGestalt database is suitable for seed gene screening with the methods of enrichment analysis and highly significant connected node analysis.

The prediction ability of hub genes on the risk of lung adenocarcinoma was evaluated by receiver operating characteristic (ROC) curve analysis based on TCGA database. The area under the curve (AUC), sensitivity, and specificity of hub genes were calculated for evaluation.

The correlation between hub genes and immune infiltration

The Tumor-Immune System Interaction Database (TISIDB, http://cis.hku.hk/TISIDB/) was used to estimate the correlation between hub genes and immune infiltration. Furthermore, the association between gene mRNA expression and the abundance of lung adenocarcinoma tumor-infiltrating lymphocytes (TILs) was evaluated. The Pearson correlation coefficient was calculated for evaluation.

The mean ± standard deviation (SD) is presented for numerical variables. Student’s t-test was used to evaluate the differences of means between two groups. P values less than 0.05 (two-sided) was defined as statistically significant. Linear correlation analysis was performed to assess the relationship between gene expression. The SAS software (SAS 9.4) was used for statistical analysis. The R software (R 3.6.1) and GraphPad Prism were used for graphic plotting in this study. 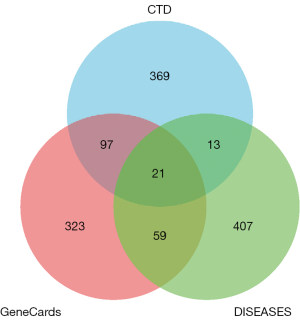 Figure 1 A Venn diagram analysis for the identification of common genes associated with lung adenocarcinoma based on the public databases. CTD, Comparative Toxicogenomics Database. 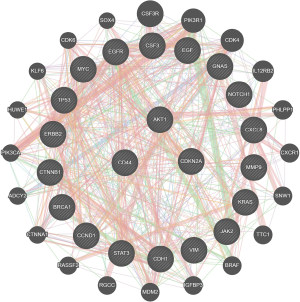 The WebGestalt database was used for hub gene identification based on the 21 common genes associated with lung adenocarcinoma screened from the three public databases. Overrepresentation analysis (ORA) was chosen for the enrichment of hub genes. Genome protein coding was selected as the reference set. Using a minimum P value criterion for hub gene identification, AKT1, CD44, and CDKN2A were found to have significant interaction effects (Table 3). 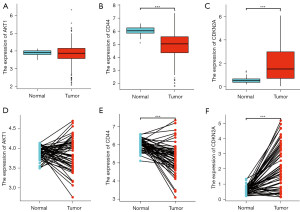 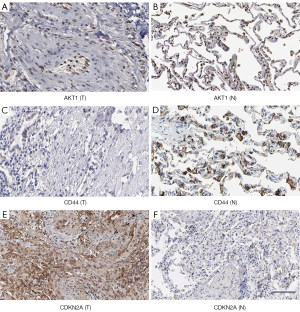 Predictive ability of hub genes for the risk of lung adenocarcinoma

The correlation between hub genes and immune infiltration

TISIDB analysis was conducted to estimate the correlation between hub genes and lung adenocarcinoma immune infiltration. Figure 8 shows that the mRNA expression of AKT1, CD44, and CDKN2A was significantly associated with the abundance of activated (Act-) CD4+ T cells, Act-CD8+ T cells, regulatory T cells (Treg), and CD56 bright cells (P<0.05 for all). 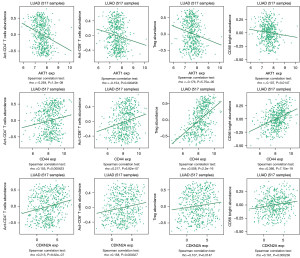 In addition, as shown in Figure 9, there were significant differences in the abundance of 4 immune infiltrate cell types, including T cells, effector memory T cells (Tem), Treg cells, and natural killer (NK) CD56 bright cells, depending on high or low expression of AKT1, CD44, and CDKN2A. The results indicated that mRNA expression of AKT1, CD44, and CDKN2A may influence the abundance of TILs in lung adenocarcinoma. 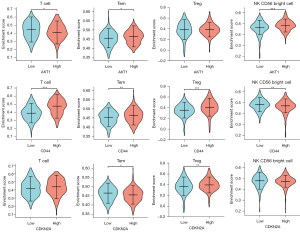 Although a large number of bioinformatic databases are available for analysis, the information has not yet been effectively applied to the biological mechanisms, diagnosis, and treatment of disease. Massive datasets with multidimensional information about biology urgently need to be combined and examined from multiple angles (18). In this study, the GeneCards, CTD, and DISEASES databases were used and integrated to explore hub genes correlated with lung adenocarcinoma. According to the results of the Venn Diagram software, 21 genes were defined as common genes among the three databases. Gene enrichment analysis is a common method for functional analysis of a group of genes. Through integration of different databases and further analysis, some crucial biomarkers in disease biological development can be obtained, which is conducive to the exploration of disease pathogenesis, the development of early diagnosis, and the realization of personalized therapy (19,20). Consequently, we combined these 21 common genes into a gene set for further bioinformatics analysis. WebGestalt was then used for hub gene identification, and AKT1, CD44, and CDKN2A were identified as having the strongest interaction among the common genes. Furthermore, TCGA, UALCAN, and HPA databases were analyzed for gene expression validation. The results of the ROC curve analysis indicated that AKT1, CD44, and CDKN2A have a good predictive ability on the risk of lung adenocarcinoma. In addition, significant correlations between AKT1, CD44, and CDKN2A and lung adenocarcinoma immune infiltration was observed based on the TISIDB.

As an important member in the AKT kinase family, AKT1 has been reported to be abnormally expressed in several human tumor cells (21). As a key protein molecule in PI3K/AKT signaling pathway, the protein expression of AKT1 has been proved to be involved in the regulation of various cellular functions, including cell proliferation, metabolism and apoptosis, which is crucial in the development of tumors (22). However, the results have been inconsistent. One study found that AKT1 can inhibit the migration and invasion of breast cancer cells by regulating the activity of T cells (23). However, another study demonstrated that AKT1 promoted cell migration and tumor metastasis in a mouse model (24). Rao et al. reported that AKT1 inhibition can promote the migration and invasion of lung adenocarcinoma cells, indicating AKT1 may have a significant impact on the regulation of tumor metastasis (25). To date, several investigations have suggested that abnormal expression of AKT1 is significantly associated with clinical features, prognosis, and treatment outcomes in patients with lung adenocarcinoma (26,27). In this current study, AKT1 was selected as a hub gene associated with lung adenocarcinoma. It was overexpressed in normal tissues compared with tumor tissue. Furthermore, the results from the TISIDB showed that AKT1 mRNA expression was significantly associated with the abundance of Act-CD4+ T cells and Act-CD8+ T cells, which is consistent with other research results. AKT1 may be a novel tumor biomarker for the exploration of the biological mechanisms and targeted therapy of lung adenocarcinoma.

Variations in CD44 expression have been shown to be a major feature in many kinds of human cancers, especially in lung cancer (28,29). However, the conclusions in several studies have been inconsistent. Abnormal expression of CD44 was detected in both blood and tissue samples from lung cancer patients, and was associated with tumor metastasis and prognosis (30). It has also been shown that silencing the gene expression of CD44 can inhibit cell growth and proliferation in lung cancer, suggesting that CD44 may have some effect on tumor therapy (31). In addition, CD44 expression was found to induce resistance to targeted therapy of lung adenocarcinoma through epithelial-mesenchymal transformation (32). Nevertheless, Sung et al. reported that CD44 overexpression can reduce the risk of poor prognosis in lung adenocarcinoma patients (33). Although the biological mechanisms of the influence of CD44 on lung adenocarcinoma development requires further study, the results in our study suggested that CD44 may be a potential new tumor biomarker for the evaluation and therapy of lung adenocarcinoma.

The authors are grateful for the availability of data from the public databases.

Reporting Checklist: The authors have completed the STREGA reporting checklist. Available at https://tcr.amegroups.com/article/view/10.21037/tcr-22-2225/rc

Conflicts of Interest: All authors have completed the ICMJE uniform disclosure form (available at https://tcr.amegroups.com/article/view/10.21037/tcr-22-2225/coif). The authors have no conflicts of interest to declare.