Fat lure: adipocytes attract cancer cells out of the prostate

Although the majority of prostate cancer (PCa) cases are now detected and treated at early stages, PCa remains the second leading cause of cancer death in American men (1). In the case of more advanced tumors, androgen deprivation can prevent cancer progression temporarily, but this inevitably leads to castration-resistant prostate cancer (CRPC). In recent years, several targeted therapies have entered the clinic that inhibit the androgen receptor (AR), a key driver of CRPC, but tumors often gain secondary resistance to these therapies (2). Additional studies that explore novel mechanisms of PCa progression could contribute to development of more effective therapies. In a paper published this year in Nature Communications, Laurent et al. identified a novel chemokine signaling pathway in PCa that links adipocyte-secreted CCL7 to PCa cell migration (3), suggesting that this signaling pathway is a potential therapeutic target.

Besides the predominant role of AR in PCa, other signaling pathways are also important for PCa progression, including chemokines such as CXCL12 (4). PCa cells express the chemokine receptor CXCR4 which is activated by CXCL12, a chemokine expressed by bone stromal cells (5). As a result, CXCR4-positive PCa cells frequently metastasize to the bone (6). Similarly, adipose tissue is recognized as an endocrine organ that can secrete a variety of factors (adipokines) and influence cell behavior (7). Not surprisingly a correlation exists between obesity and PCa aggressiveness (8-10), suggesting that secreted adipokines may influence PCa cell behavior.

Of particular interest to Laurent and colleagues was the interplay between periprostatic adipose tissue (PPAT) and PCa tumor cells, and how obesity affects this interplay. The authors first demonstrated that condition media from adipocytes can direct the migration of DU-145 and PC-3 PCa cell lines. The authors further identified that this migration is due to chemokine signaling between chemokine receptor CCR3 and ligand CCL7 secreted by mature adipocytes. Importantly, they found that CCR3 was expressed in these PCa cell lines as well as in patient tumors, and that their expression levels correlated with cancer aggressiveness. Perhaps most exciting, the authors demonstrated that the CCR3/CCL7 axis-mediated migration can be blocked by a CCR3 inhibitor or monoclonal antibodies for CCR3 and CCL7 (Figure 1). 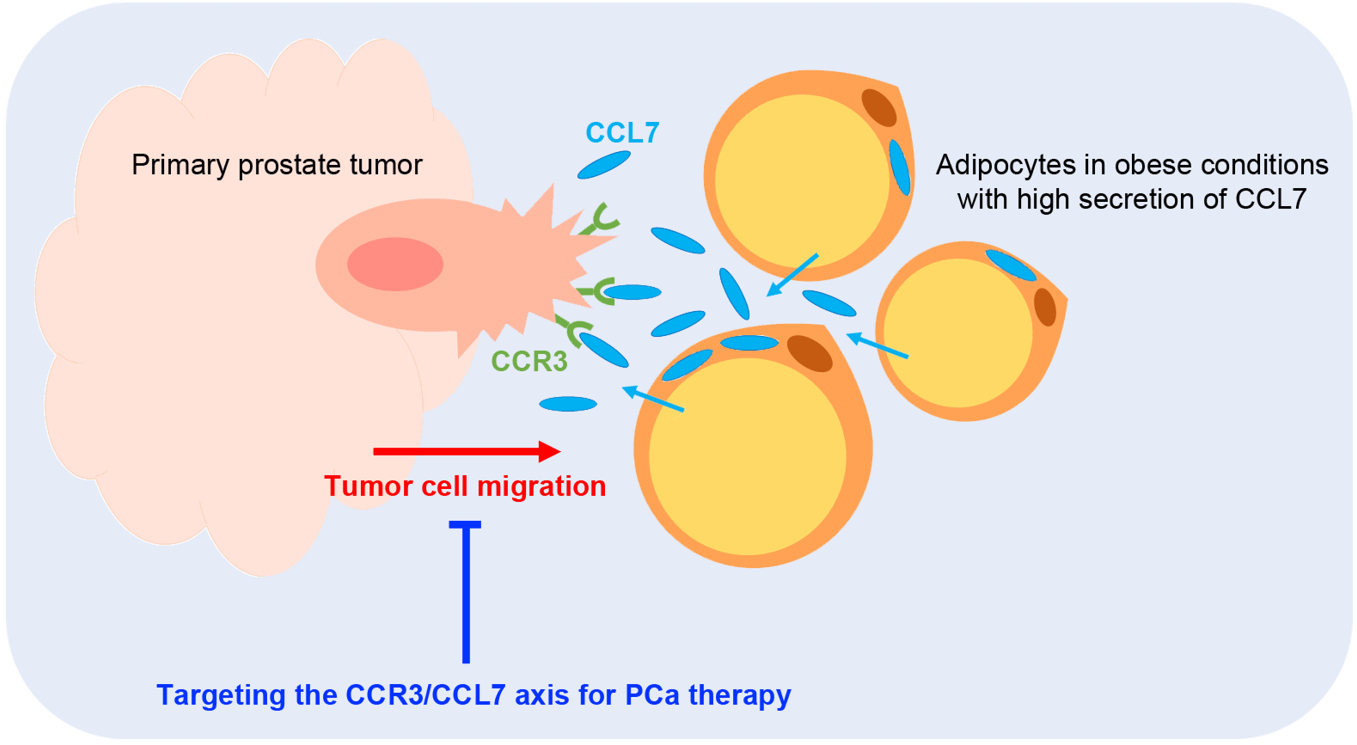 Because obesity correlates with increased CCR3 expression that may reflect increased secretion of CCL7, Laurent et al. also assessed the effect of obesity on tumors in a murine orthotopic graft model of PCa. In this system, obese conditions led to an increase in tumor size that was dependent on CCR3 expression. Further investigation on metastases and animal survival could yield important insights into how the CCR3/CLL7 axis might affect PCa cell migration in vivo.

In their recent publication, Laurent et al. characterized a novel chemokine signaling pathway in PCa which links signaling molecules secreted by PPAT with tumor progression. The authors’ findings bring to light a few key questions about PCa progression and interplay between different components of the tumor microenvironment. Gaining a better understanding of the mechanism of increased CCR3 expression in PCa cells, the downstream targets of active CCR3 that trigger cell migration, and the long-term effects of obesity on CCR3/CCL7-mediated cell migration are essential. In addition, further studies to uncover relationships between CCR3/CCL7 signaling in PCa and other cancer-associated signaling pathways could reveal a complex, well-orchestrated network. One prediction could be that CCR3/CCL7 signaling induces PCa cells to disseminate from the primary tumor into adjacent tissue, while another chemokine signaling pathway like CXCR4/CXCL12 may encourage already freely circulating tumor cells to metastasize to distant secondary sites. Therefore, the findings by Laurent et al. have paved the way for these future studies, as well as the development of therapeutics that may have the potential to block tumor cell migration at a very early stage.