Nasopharyngeal carcinoma (NPC) has a high disease incidence in China, and radiotherapy is the primary treatment modality for nonmetastatic NPC patients (1,2). With the application of the intensity-modulated radiotherapy (IMRT) technique, the majority of patients can be cured and have a long-term survival time; thus, reducing the radiation side effects of organs at risk (OARs) to improve the quality of life of patients is particularly important.

Among all known long-term side effects, radiation-induced cranial nerve palsy (RICNP) is not a rare complication; it usually occurs in the lower cranial nerves (LCNs), with an incidence ranging from 0.3% to 20.6% (3-10). RICNP in NPC significantly compromises the patients’ quality of life and can even endanger their lives. Damage to the glossopharyngeal nerve (IX) causes loss of sensation in the pharynx and decreases salivation. Palsy of the vagus nerve (X) leads to impaired parasympathetic functions of almost all organs, and palsy of the hypoglossal nerve (XII) causes complete paralysis of the ipsilateral side of the tongue (11). However, LCNs have not served as a conventional OAR when delineating radiotherapy for head and neck cancer, including NPC. One of the reasons may be that the LCNs adjacent to carotid sheath are included in the high-dose irradiation volume. Moreover, the doses of radiation that LCNs are exposed to in the Radiation Therapy Oncology Group (RTOG)-guided IMRT plan (RTOG plan) are difficult to adjust to decrease the possibility of complication development. The reduced-volume IMRT plan (reduced-volume plan) has been used in recent years in the treatment of NPC, and the efficacy of this technique is comparable to that of the RTOG plan (12-14). The application of reduced-volume IMRT may provide the opportunity to decrease the doses received by LCNs. However, few studies have assessed the risk of LCN complications in NPC patients after reduced-volume IMRT. Moreover, the difference in LCN complications between RTOG and reduced-volume IMRT remain unknown. In the present study, therefore, we evaluated the difference in LCN complications predicted by the normal tissue complication probability (NTCP) model between RTOG and reduced-volume IMRT planning in radiotherapy for NPC.

From May 2013 to September 2017, 50 patients with newly diagnosed NPC receiving curative radiotherapy were retrieved, and the characteristics are summarized in Table 1. All patients underwent disease staging according to the American Joint Committee on Cancer staging system [2002] and were divided into two T-stage groups, 25 patients in the T1-2 group and 25 patients in the T3-4 group. All patients had no LCN palsy on physical examination before radiotherapy. 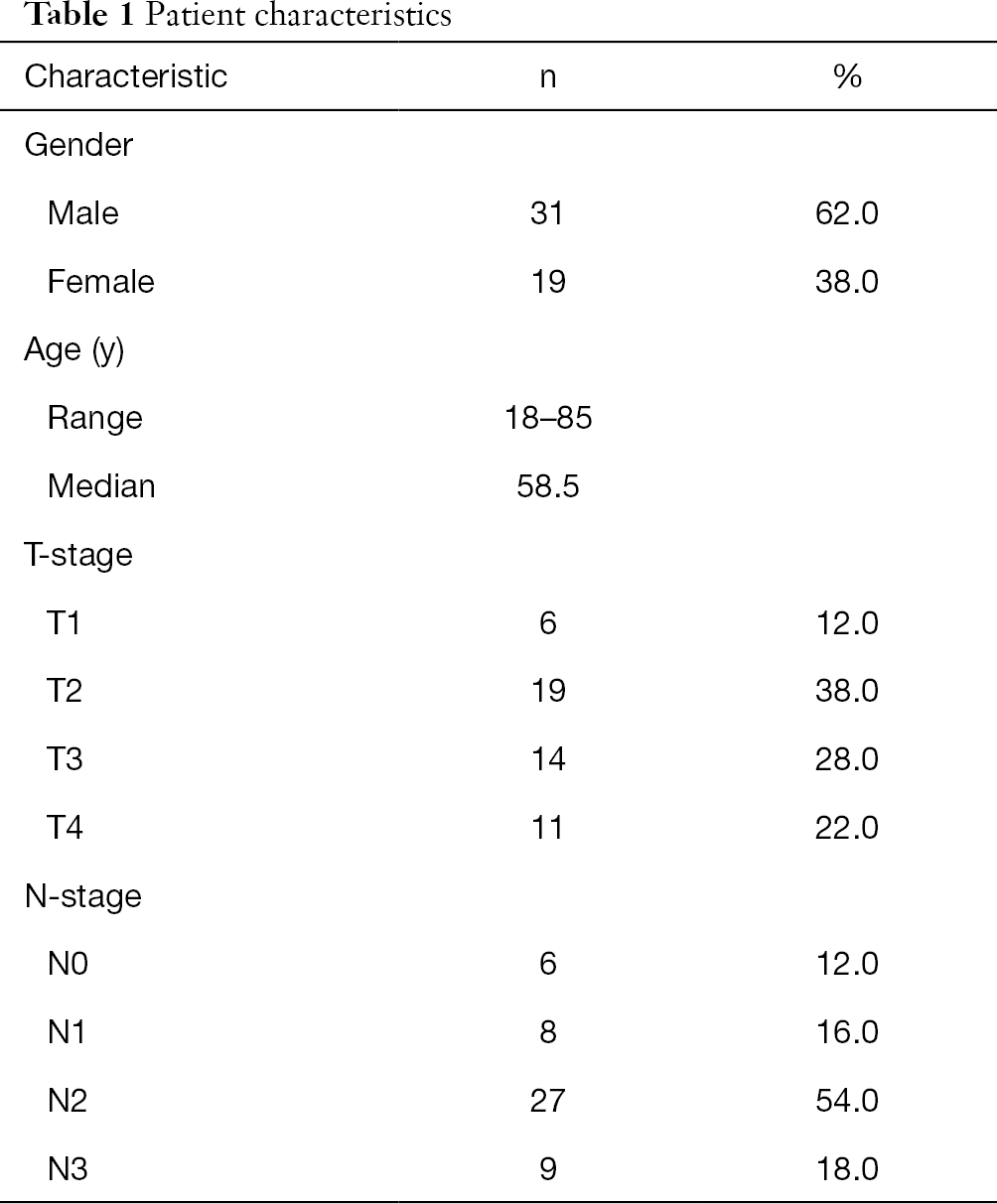 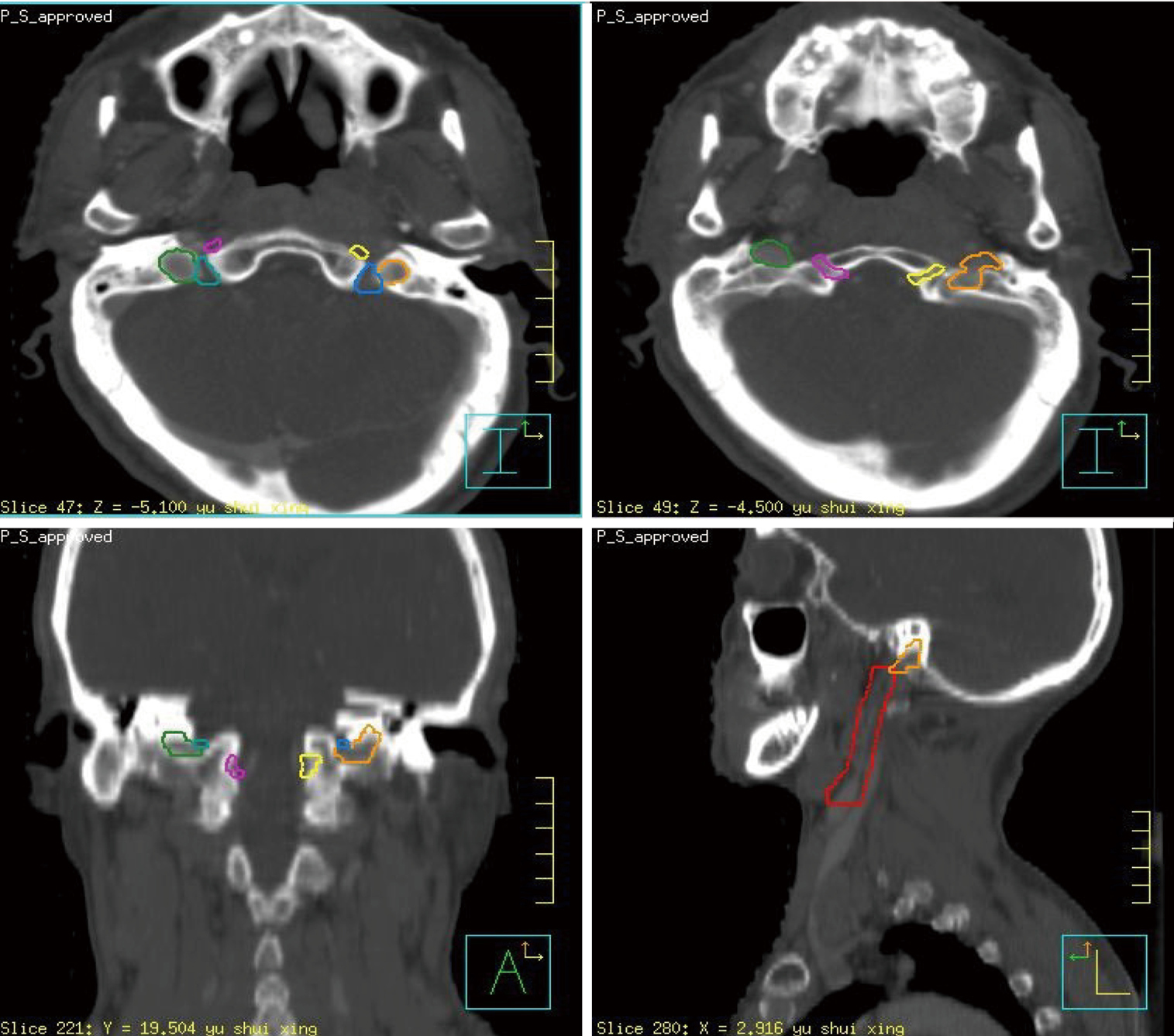 The treatment goals for the IMRT plan were that the prescribed dose would cover 95% of the PTV volume, and the maximum dose would not exceed 107%. Regarding the OARs, the maximum doses to the brain stem and the spinal cord were set to 5,400 and 4,500 cGy, respectively. In addition, the doses to other normal tissues was minimized within a reasonable range without affecting the target coverage.

The incidence of LCN complications predicted by the NTCP model

The maximum dose (Dmax) and the mean dose (Dmean) of bilateral LCNs from RTOG and reduced-volume IMRT planning were investigated in each patient. The Lyman-Kutcher-Burman (LKB) calculation model in Pinnacle3 was used to predict the incidence of LCN complications (19-21). Because the characteristics of LCNs are similar to those of the optic nerve, the parameters applied in the present study were calculated based on the optic nerve as follows: α/β =3 and the TD50 (the mean dose predicting a 50% risk of complications), n (a parameter that considers the volume effect), and m (the slope of the dose–response curve) were 6,500 cGy, 0.25, and 0.14, respectively (20,22,23).

SPSS 19.0 software was used for data analysis, and Sigma Plot 10.0 was used for figure plotting. A paired sample t-test was used to compare the differences in all considered parameters between the RTOG and reduced-volume IMRT planning approaches and between the clinical T1-2 and T3-4 groups. The correlations between LCN NTCP and dose volume were analyzed using Pearson’s correlation coefficient. A two-tailed value of P<0.05 was considered statistically significant. 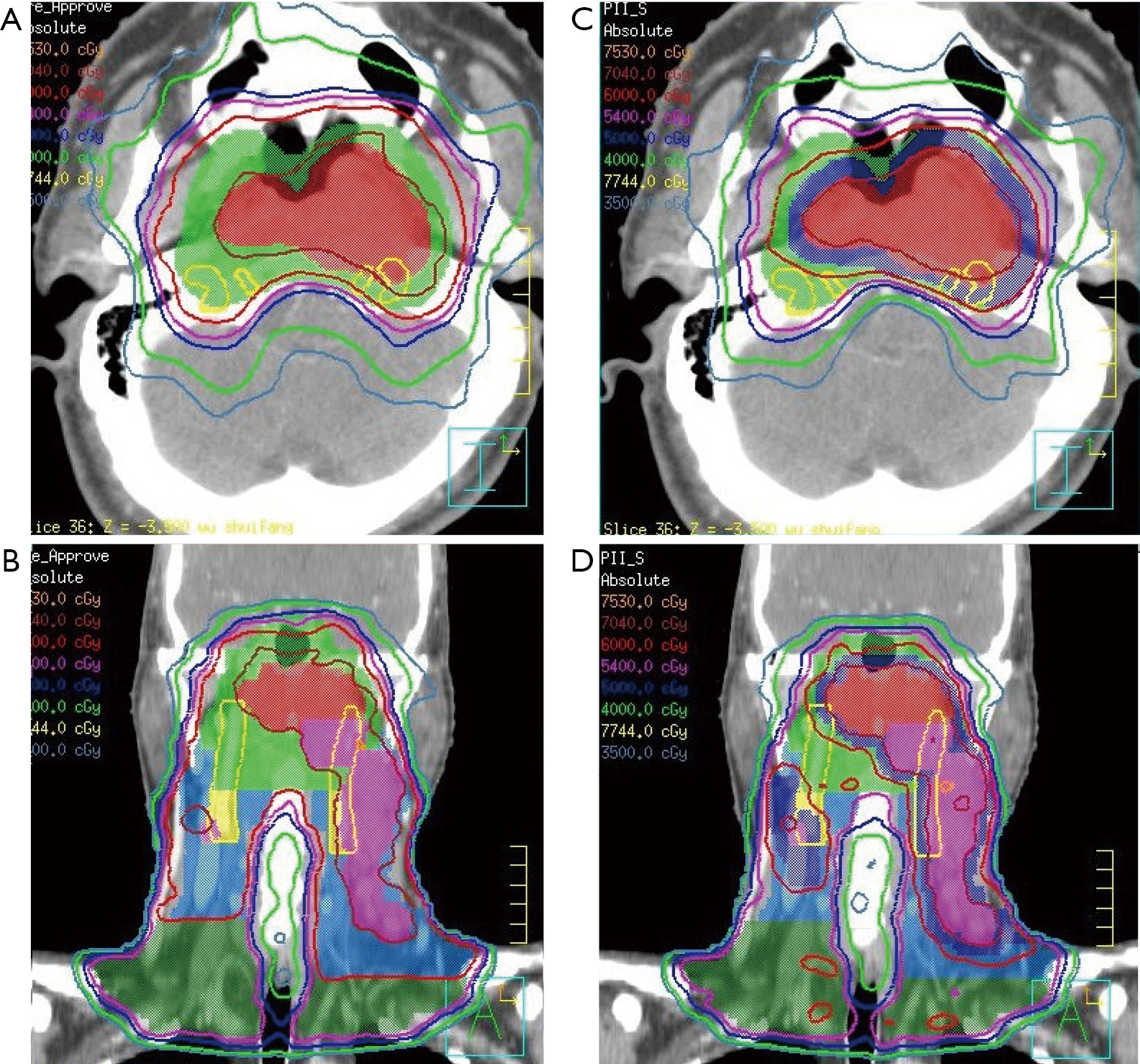 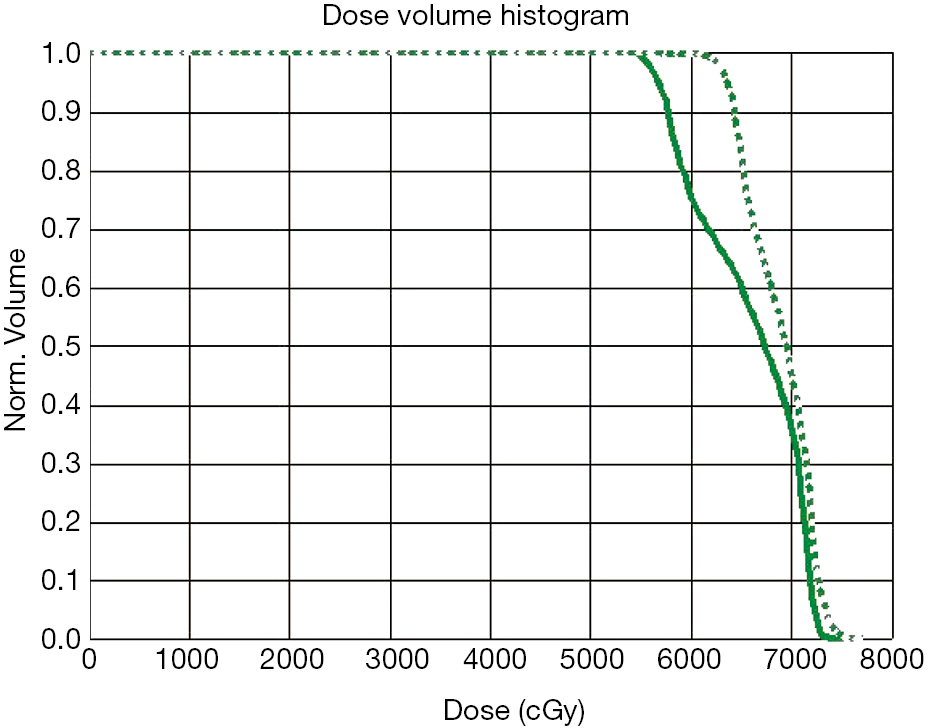 Figure 3 The dose volume histogram of LCNs for one case: The solid and dashed lines indicate the dose volume of LCN-based planning of reduced volume and RTOG. LCN, lower cranial nerve. 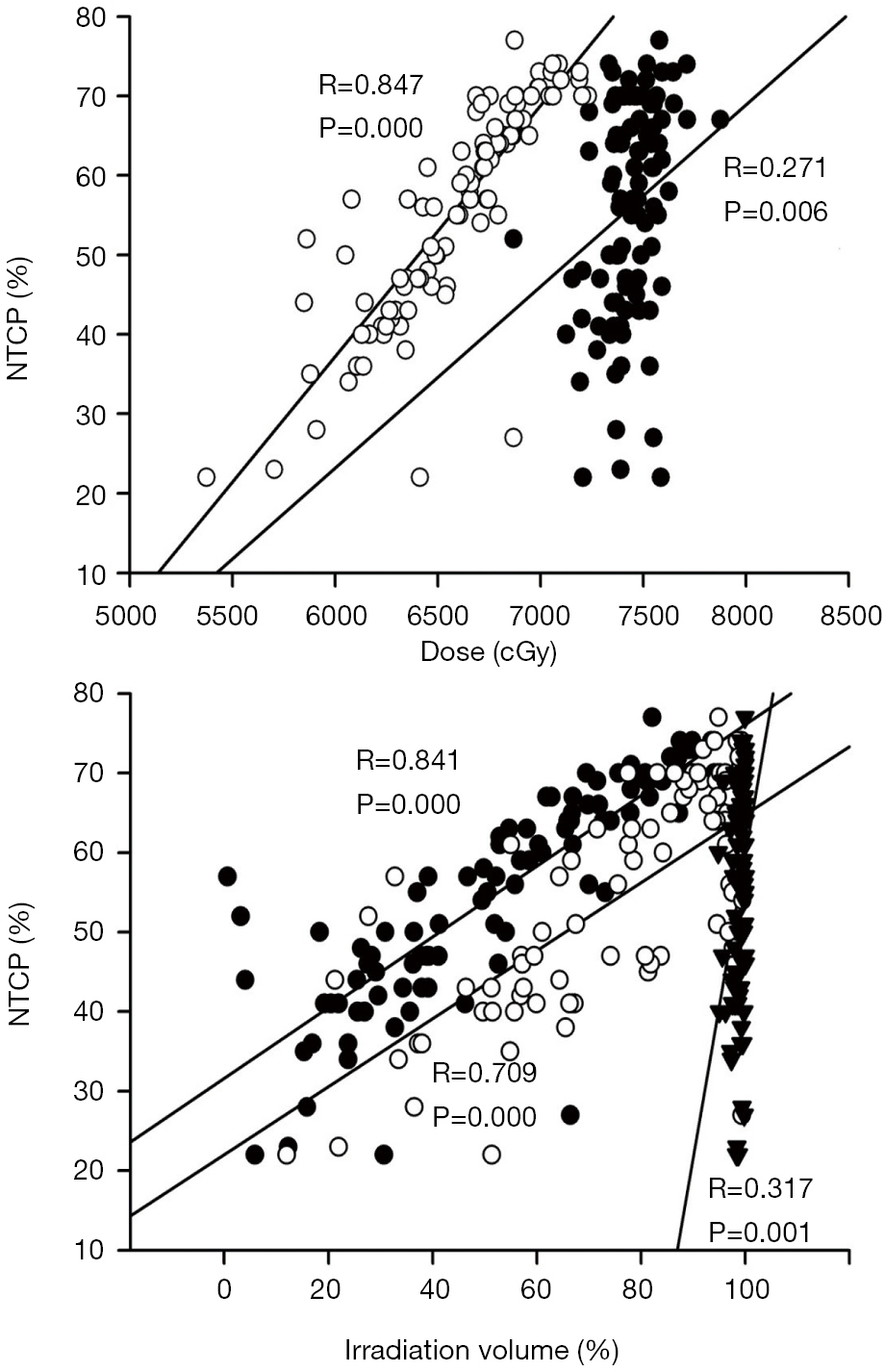 RICNP is not a rare complication and can be a long-term problem after radical radiotherapy for NPC. Prevention of RICNP is paramount because the functional impairment can be profound and refractory to standard therapies.

Several risk factors for RICNP have been described. Kong et al. identified initial CNP at diagnosis, chemotherapy, total radiation dose and upper neck fibrosis as independent risk factors for developing RICNP (24). However, the majority of studies on RICNP included patients prior to the availability of IMRT, which improved the therapeutic ratio and/or treatment tolerance in patients with head and neck cancer by facilitating the sparing of normal tissue, and IMRT is already the standard treatment for NPC. The potential overlap among fields irradiated in the neck is often the main cause of RICNP in conventional radiotherapy, while RICNP generally does not appear in IMRT, and neck fibrosis is also expected to significantly decrease with the use of IMRT treatment given the dose restraint to posterior neck muscles. However, the effects of dose escalation in IMRT may give rise to the long-term development of CNP (24). Instead of being unable to accurately locate the LCNs in conventional radiotherapy, the precise delineation of LCNs is now possible in IMRT planning with the application of CT and MRI techniques. Dose evaluation and NTCP prediction are also available.

The reduced-volume plan was an expert consensus provided by the Working Committee for the clinical staging of NPC in China in 2010, in which the CTV is reduced accordingly on the basis of RTOG 0225 clinical trial; its long-term curative effect has also been confirmed to be ideal (12-14). However, theoretically, there could also be reduced toxicity to surrounding OARs. The reduced-volume plan and the RTOG plan are the two most commonly used IMRT plans in China today. The purpose of this study was to evaluate the difference in LCN NTCP between the two IMRT plans.

RICNP is related to many factors. A total of 512 NPC cases were analyzed retrospectively by Kong et al. (25). Cranial nerve injury developed in 81 of 512 cases, and the 5- and 10-year cumulative incidence rates were 10.3% and 25.4%, respectively. Injury to the XII cranial nerves was most common. Multivariate analysis showed that RICNP was mainly associated with tumor invasion, chemotherapy, nasopharyngeal total radiation dose and age, while LCN injury was associated with N staging and radiation field. LCN injury increased for later stages of cervical lymph node. Thirty-one patients with breast cancer were selected by Wu et al. (26), and 50 Gy of postoperative adjuvant radiotherapy was delivered to the ipsilateral supraclavicular area and chest wall. Dmax, Dmean, V40, V45, V50, V52.5, and V55 of BP were evaluated. The results showed that there was no relationship between BP neuropathy and Dmax, but the number of lymph node dissections was an independent influencing factor of BP lesions.

In fact, few studies have been reported on LCN injury after radiotherapy in NPC, and even fewer studies on NTCP are available. There is currently a lack of corresponding parameters of NTCP in LCN injury. Because LCNs have characteristics similar to those of the optic nerve, parameters of the optic nerve (TD50, n and m: 6,500 cGy, 0.25, and 0.14) from Burman (20) were used in this study to calculate the NTCP.

In our results, there exists strong correlations of LCN NTCP with Dmean (R=0.847, P=0.000) and an irradiation volume of more than 6,600 cGy (R=0.841, P=0.000), while there is a weak correlation with Dmax (R=0.271, P=0.006). Though LCNs are serial organs, the irradiation condition of the maximum point dose to the LCN could vary. Sometimes only a tiny volume of the LCN was exposed to the Dmax, while in rest of the LCN volume was exposed to relatively lower doses; thus, the Dmax may not truly reflect the LCN dose. As illustrated in Figure 4, NTCP increased with increasing Dmean and for an irradiation volume of more than 6,000 cGy, but NTCP did not increase with Dmax. On the other hand, the higher NTCP in the T3-T4 group may be related to the high irradiation volume of more than 6,600 cGy to the PTVnx and PTVnd (as shown in Tables 2,3). In addition, previous studies revealed that LCN injury was related to both a high dose and the irradiated volume, which induced severe fibrosis on the carotid sheath (25,27).

It is feasible to precisely delineate the LCN, which can serve as a routine OAR, and to further predict LCN complications using the NTCP model in IMRT planning for NPC. Both a high Dmean and a large irradiation volume are important factors in predicting complications of LCNs. Of the two most common IMRT guidance plans in China, LCN NTCP was significantly lower for the reduced-volume plan than for the RTOG plan.

We thank American Journal Experts for assisting in the preparation of this manuscript.

Funding: This work was supported by the Suzhou Science and Technology Project (SYSD2018101).

Ethical Statement: The authors are accountable for all aspects of the work in ensuring that questions related to the accuracy or integrity of any part of the work are appropriately investigated and resolved. The study was approved by the ethics committee of The Second Affiliated Hospital of Soochow University (No. 2015021). Written informed consent was obtained from the patient for publication of this manuscript and any accompanying images.