Depression and anxiety are common in patients with cancer. As in the reports regarding the association between depression and mortality in various physical conditions (1), there have been similar investigations of these issues in patients with cancer (2). However, these investigations have yielded mixed results regarding mortality, likely due to methodological differences among the studies. For example, the timing of diagnosis of psychiatric disease, i.e., before versus after the cancer diagnosis can affect the results (3). For the choice of assessment measures, the evidence for an association between depression and mortality was weaker in studies that used structured interviews than in those that used dimensional scales (1). Adjustment for confounding variables can also affect the results. The well-known prognostic factors in breast cancer are primary tumor size, presence of regional lymph nodes, distant metastases, histologic grade, and hormone receptor status. Other important confounding variables include social inequality, obesity, cigarette smoking, alcohol intake and exercise. These factors are not reliably documented in retrospective studies, unless drawn from large linkage studies such as those conducted by the Danish Cancer Society (4).

In a previous meta-analysis of 25 independent studies, the mortality rate was up to 39% above average in patients diagnosed with major or minor depression [unadjusted relative risk (RR), 1.39; 95% confidence interval (CI), 1.10–1.89] (5). Another recent meta-analysis by Wang and colleagues (2) of 51 cohort studies reported significant impacts of depression and/or anxiety on cancer-specific mortality (adjusted RR, 1.21; 95% CI, 1.16–1.26) and all-cause mortality in patients with various types of cancer (adjusted RR, 1.24; 95% CI, 1.13–1.35). However, in subgroup analysis of seven studies of breast cancer, depression and anxiety were not significantly associated with mortality.

Several biobehavioural pathways have been suggested to be possible links between psychological distress and tumour progression. Non-adherence to cancer treatment, including endocrine therapy, and negative lifestyle factors, such as smoking, physical inactivity and alcohol consumption, can impact cancer progression indirectly (4,6,7). Depression may impact the immune system of patients due to impaired activity of natural killer cells and cell-mediated immunity. Dysregulation of hypothalamic-pituitary-adrenal axis activity and activation of the automatic nervous system could increase inflammation and oxidative/nitrosative stress (6).

Given the concerns regarding the association between depression and mortality in patients with cancer, the question of whether treatment of depression could improve survival has been raised. There have been several randomised controlled trials regarding the effects on mortality of psychosocial interventions in patients with comorbid cancer and depression, as a primary or secondary outcome, but the results were inconsistent; therefore, there is still debate concerning this issue (8,9). Meanwhile, there have been few investigations regarding the potential benefit of antidepressant treatment in survival in patients with cancer. Most studies used a retrospective design, which makes it difficult to identify causal relationships.

In breast cancer, there have been reports of an increased risk of mortality, rather than decreased mortality, associated with antidepressant use. Various types of antidepressants, e.g., selective serotonin reuptake inhibitors (SSRIs) and tricyclic antidepressants (TCAs), have been reported to increase breast cancer mortality in women, although conflicting results have been reported (10). Among the SSRIs, paroxetine has attracted attention with regard to increasing mortality in patients with breast cancer due to its possible interaction with tamoxifen via inhibition of the cytochrome P450 2D6 isoenzyme, its alteration of oestrogen responsiveness, or its oestrogenic effect (10). Although this has not yet been proven, it is prudent to exert caution when considering paroxetine and related SSRIs using the P450 2D6 metabolic pathway for patients with breast cancer.

Shim et al. used National Health Insurance Service (NHIS) data from South Korea to examine the associations of depression, anxiety and antidepressant treatment with mortality in patients with breast cancer (11). The prevalence rates of depression and anxiety were lower than in previous studies performed in Western countries, and also much lower than in another nationwide South Korean study that used NHIS data (12). This could have been due to the exclusion of cases of depression or anxiety diagnosed 1 year before the breast cancer diagnosis. It is important to be specific regarding the timing of the depression/anxiety diagnosis in relation to that of cancer when investigating the impact of these comorbidities on mortality. The effects of mental disorders with first onset after cancer diagnosis may differ from those of recurrent mental disorders, with the former probably being a product of cancer-specific stress (3). In a nationwide cohort study, mental disorders with first onset after cancer diagnosis were shown to increase cancer-specific mortality, while recurrent mental disorders had no such effect (3). 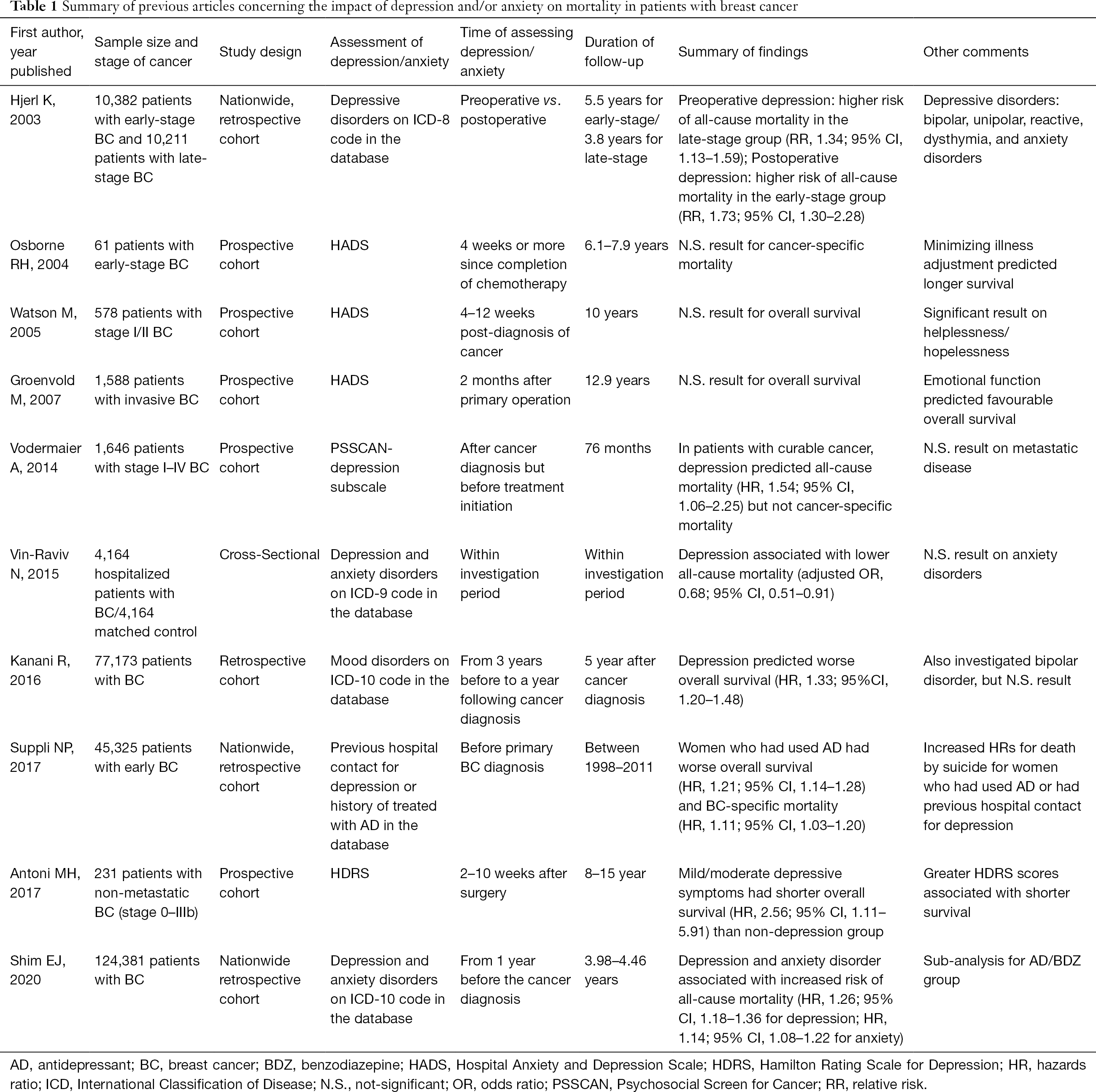 As mentioned above, adjusting recognised confounding factors is also important. The results of the study by shim et al. were adjusted by sex, age, place of residence, income level, comorbid illness, type of breast cancer, disability, and receipt of chemotherapy/radiation therapy/hormonal therapy/target therapy (11). However, the results were not fully adjusted for several important confounding factors to analyze mortality. For example, the severity of cancer at first diagnosis is a risk factor for mortality that affects results. In a nationwide retrospective cohort study conducted in Denmark, preoperative depression was associated with elevated mortality in late-stage breast cancer, while postoperative depression was associated with increased mortality in early stage breast cancer (15). The study by Shim et al., investigated the cancer type, i.e., cancer vs. carcinoma-in-situ, but did not differentiate between early vs. late breast cancer. Furthermore, significantly more carcinoma-in-situ cases were included in the non-depression/non-anxiety group than in the other groups. Although this difference was adjusted for by covariates, whether advanced cancer cases were similarly distributed between the groups remains unknown. Furthermore, other factors such as involvement of axillary lymph nodes, distant metastasis, and other socio-behavioral confounding factors were not investigated.

Impact of antidepressants on mortality in patients with breast cancer

In a similar previous nationwide study, higher adherence to antidepressants was associated with decreased all-cause mortality in patients with various type of cancer (24). However, among patients with breast cancer, the results differed from those of another population-based study which showed that patients with long-term SSRI use had higher mortality than their non-SSRI-using counterparts, regardless of any prior diagnosis of depression (23). Given the limitations inherent in the retrospective and/or observational designs of these studies, randomised controlled trials with mortality as the primary outcome are required for more definitive conclusions.

Determining the impact of mental illness on mortality in patients with breast cancer is very important. It is also important to determine whether appropriate mental health interventions could reduce mortality in these patients, but previous studies reported conflicting results and had methodological limitations. Nationwide studies using health insurance databases have the benefit of large sample sizes, but it is difficult to determine causal relationships and control variables in a retrospective design. However, the results could provide a basis for future prospective studies or randomised controlled trials. To investigate the impact on mortality, the timing of the depression/anxiety diagnosis relative to the cancer diagnosis, the cancer-specific mortality, and full adjustment for confounding variables are recommended.

Conflicts of Interest: All authors have completed the ICMJE uniform disclosure form (available at http://dx.doi.org/10.21037/tcr-20-2205). The authors have no conflicts of interest to declare.