The efficacy and adverse reactions of DCF and FOLFOXs regimens for patients with advanced gastric cancer in China: a meta-analysis

Gastric cancer is a malignant tumor originating from the gastric mucosal epithelium, ranking fourth in the incidence of male malignant tumors and third in mortality rate, and seventh in the incidence of female malignant tumors and fifth in mortality rate (1), imposing serious damages to the people’s health. Early gastric cancer often manifests as upper abdominal discomfort, non-specific symptoms such as fullness and nausea after eating, and it is difficult to differentiate early from other gastric diseases. Some patients with gastric cancer have progressed to advanced stage and are difficult to undergo radical resection. DCF regimen [docetaxel (TXT) + cisplatin (DDP) + fluorouracil (FU)] and FOLFOXs regimen [oxaliplatin (L-OHP) + fluorouracil (FU) + leucovorin (LV)] are the currently used chemotherapy for gastric cancer. However, due to its many adverse reactions and uncertainties in efficacy, selecting an appropriate chemotherapy regimen is another important issue in our clinical work. Therefore, this study intends to conduct a meta-analysis of the efficacy and adverse effects of DCF and FOLFOXs regimens in patients with advanced gastric cancer, and systematically evaluate the clinical value of the two chemotherapy regimens from the perspective of evidence-based medicine. We present the following article in accordance with the PRISMA reporting checklist (available at http://dx.doi.org/10.21037/tcr-19-2564).

WanFang Data, CNKI, PubMed, The Cochrane Library, Embase databases were retrieved using computer according to the “PICOS” search principle, combined keywords and free words for related documents published since the establishment of the databases. The Chinese search terms were: “晚期胃癌” “奥沙利铂” “顺铂” “多西他赛” “亚叶酸钙” “氟尿嘧啶”. The English search terms were: “advanced gastric cancer” “Oxaliplatin” “Cisplatin” “Docetaxel” “Leucovorin” “Fluorouracil”. At the same time, the references of the articles included and related meta-analysis were traced. Take PubMed as an example, the specific search strategy was as shown in Table 1. 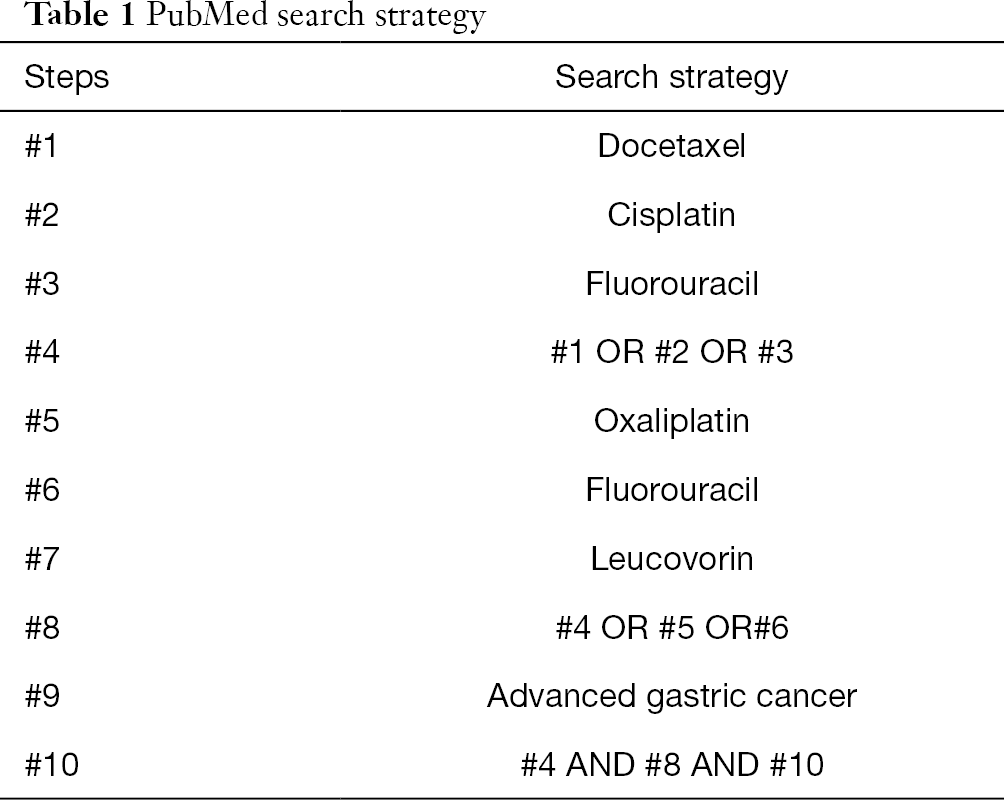 Exclusion criteria: (I) old literature; (II) incomplete data due to loss of follow-up or other reasons (and not stated in the text); (III) similar or identical repeated reports; (IV) single-center repeated studies; (IV) single protocol sample size n<20; (VI) combined with other treatments (add other chemotherapy or radiotherapy).

The basic characteristics of the experimental group and control group were comparable.

The Cochrane Handbook for RCT bias risk assessment tools was used to evaluate the literature including random sequence generation, allocation concealment, participant and investigator blinding, assessor blinding, outcome indicator integrity, selective reporting, and other sources of bias. Each item was rated as “low risk of bias” “unclear” and “high risk of bias” according to the evaluation criteria.

RECIST was used to describe changes in tumors after chemotherapy, including: complete response (CR), partial response (PR), disease stable (no change, NC) and progressive disease (PD) in all articles included objective response rate (ORR) and disease control rate (DCR). Data statistics were analyzed using Review Manager 5.3 software, with relative risk (RR) as analytical statistic for the counting data, and 95% confidence interval (CI) for each effect quantity. Before data analysis, χ2 test was used to test for heterogeneity. If P>0.05, I2 ≤50%, fixed effect model was used for analysis. Otherwise, random effect model was used. The final result was presented in the form of forest map, and P<0.05 was considered to be statistically significant. Publication bias was evaluated by funnel plot.

A total of 52 Chinese literatures were initially screened. After reviewing the full text, 9 articles were obtained according to the inclusion and exclusion criteria of the study. A total of 715 patients were enrolled, including 360 in the DCF group and 355 in the FOLFOXs group. The flow chart or study was as shown in Figure 1. 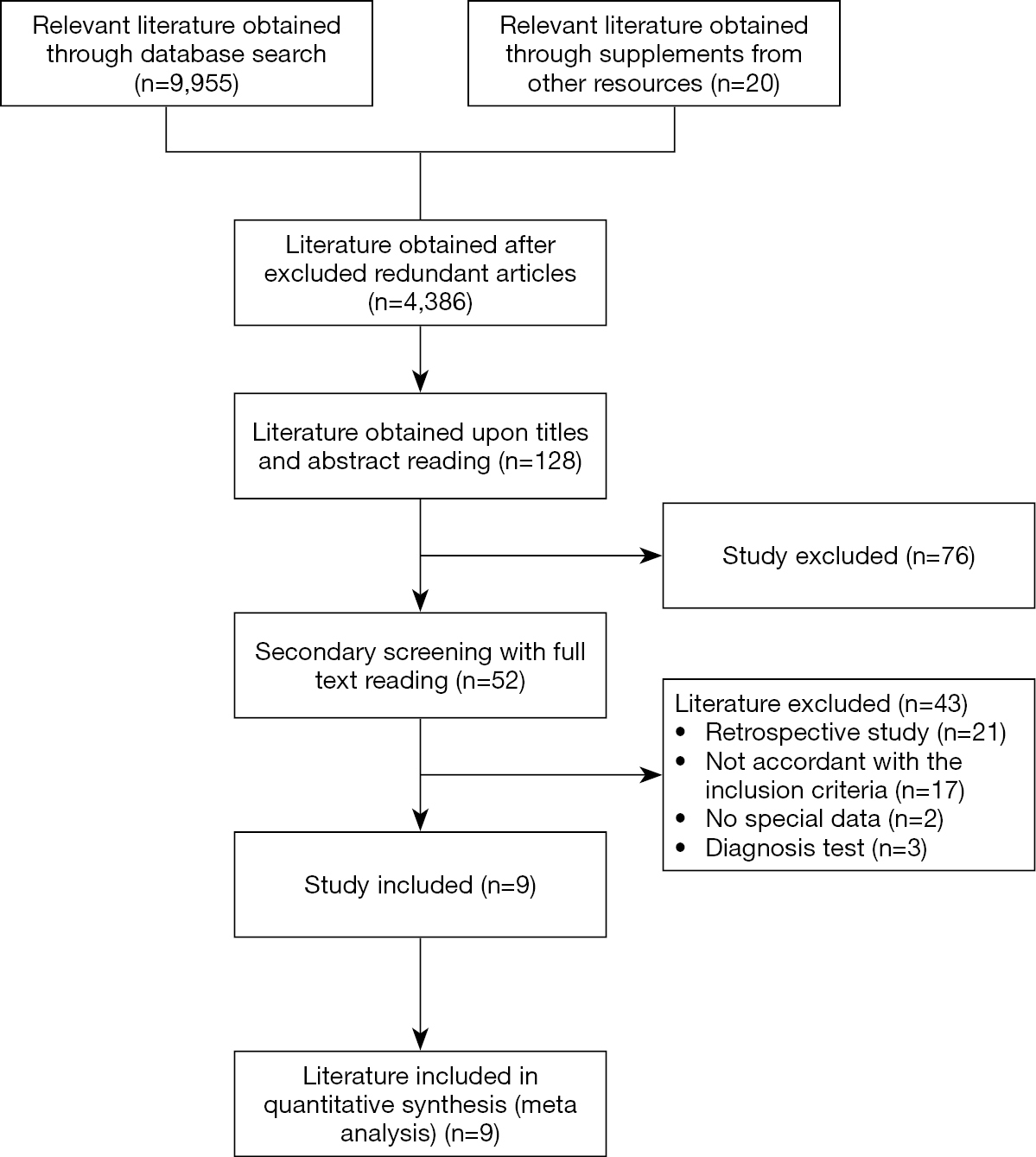 Basic information of the included studies and quality evaluation

The basic characteristics of the literature of the included studies were shown in Table 2. There was a total of 9 RCTs, all of which were multicenter clinical studies. Age, gender and other data were described in detail in each study, and there were no significant differences between the two treatment regimens (P>0.05).

Efficacy of the two chemotherapy regimens

The response rate of chemotherapy of the included studies was calculated by CR + PR. The heterogeneity of the included studies was P=0.95, I2=0%, thus fixed effect model was used. Statistical analysis by Review Manager 5.3 software the effective rates of DCF group and FOLFOX group were 51.11% and 48.17%, respectively (RR 1.06, 95% CI: 0.92–1.23). There was no statistical significance between the two groups (P=0.41), as shown in Figure 2A. Then we analyzed the publication bias. The small sample studies were distributed at the bottom of the funnel plot, while large sample studies were distributed at the top of the funnel plot, and basically arranged symmetrically around the center baseline, suggesting that publication bias of the literature of the included studies was relatively small, as shown in Figure 2B. 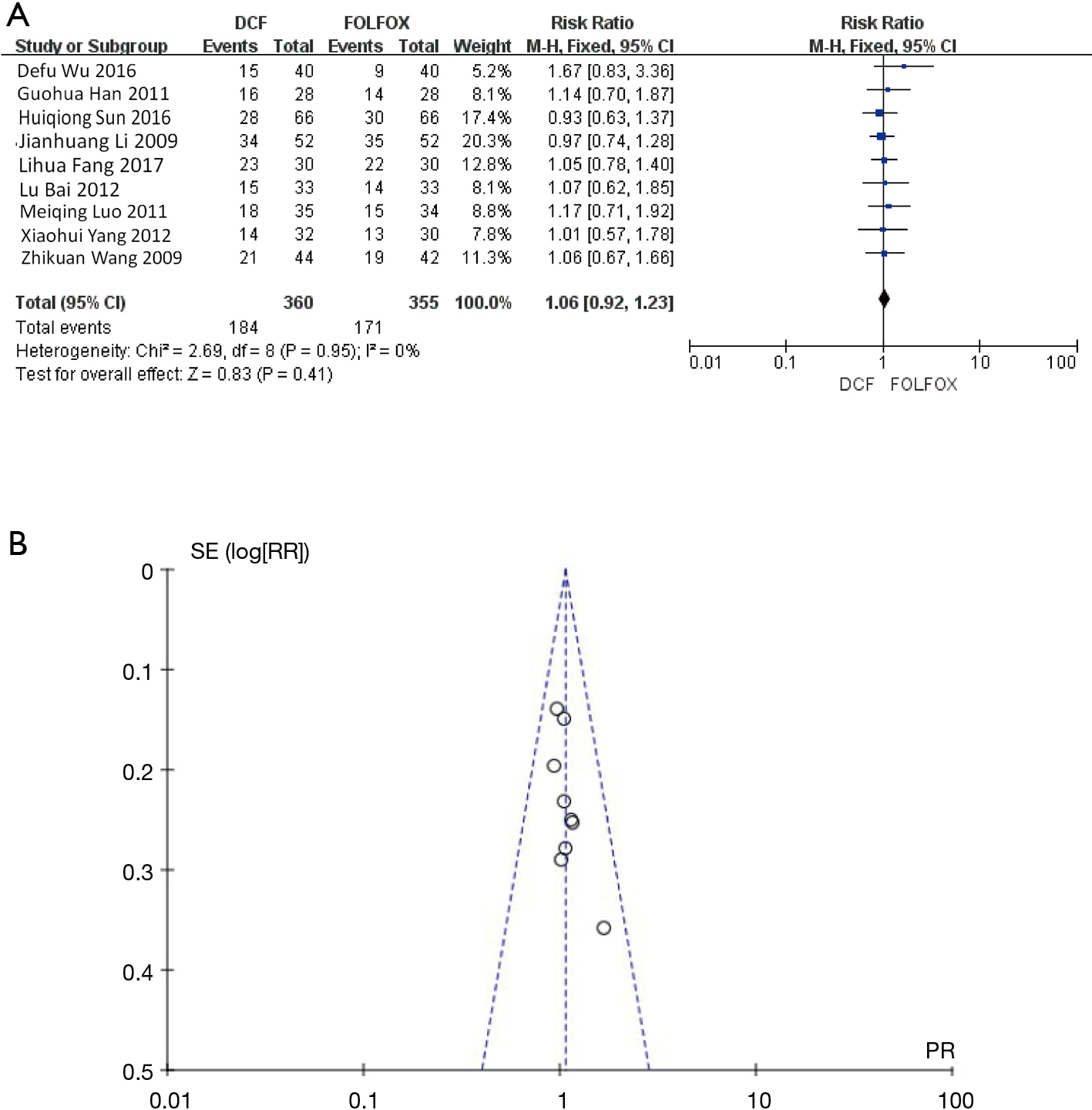 ORR and DCR of the two chemotherapy regimens 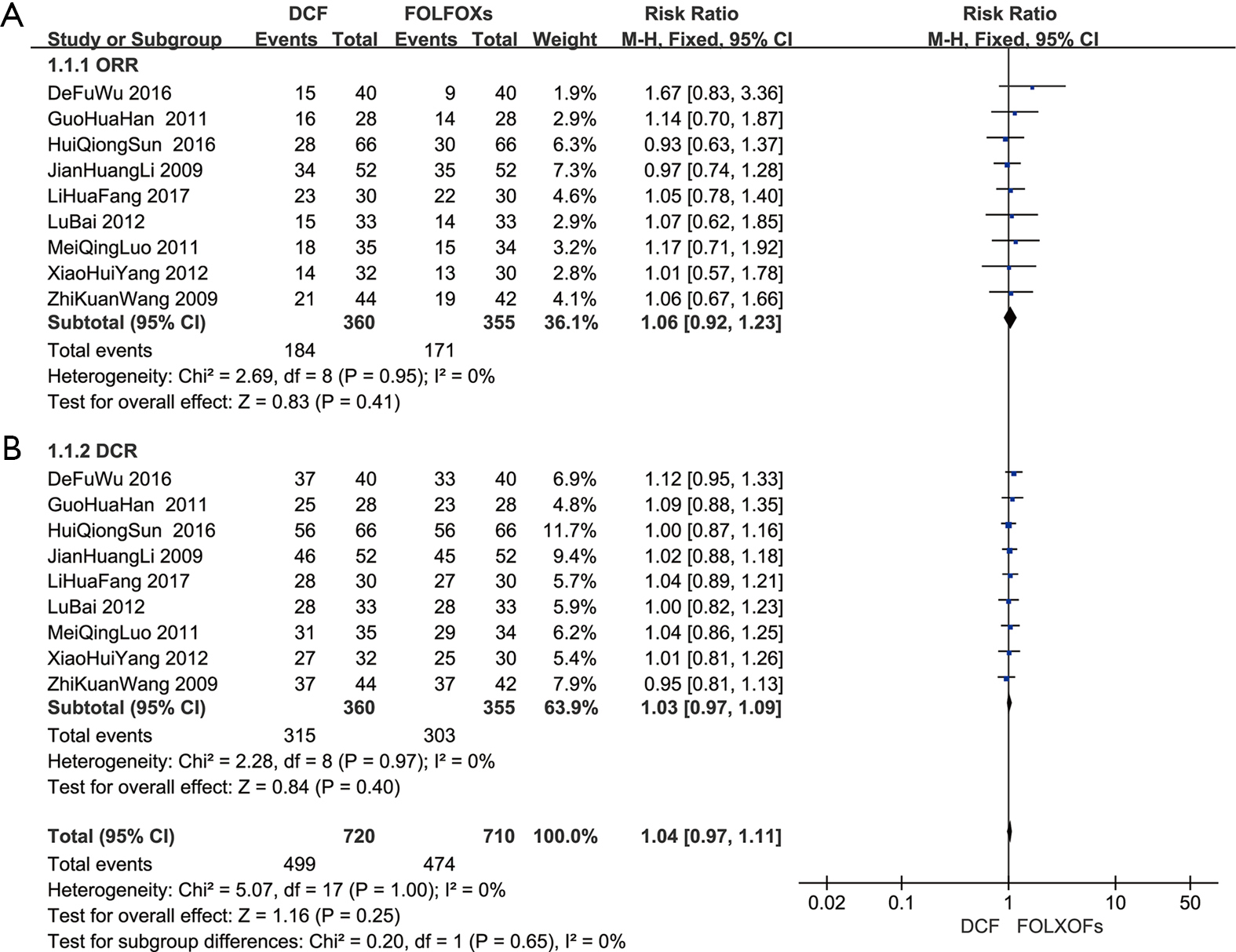 The types of adverse reactions in the DCF regimen and the FOLFOXs regimen were statistically analyzed and the results were shown in Table 3. The common adverse reactions of DCF regimen and FOLFOXs regimen were mainly found in the blood system (anemia, leukopenia and thrombocytopenia), digestive system (diarrhea, nausea and vomiting), and other systems (oral mucositis, sensory neurotoxicity and hepatic insufficiency). Statistical analysis was performed using Review Manager 5.3 software. The results showed that the incidence of nausea and vomiting (RR 1.36, 95% CI: 1.15–1.60), anemia (RR 2.04, 95% CI: 1.55–2.68), thrombocytopenia (RR 1.52, 95% CI: 1.15–2.01) and leukopenia (RR 1.70, 95% CI: 1.44–2.01) of the FOLFOXs regimen was significantly lower (P<0.05), while the incidence of sensory neurotoxicity (RR 0.53, 95% CI: 0.38–0.74) was significantly higher (P=0.0002) in the FOLFOXs regimen than the DCF regimen (Table 3, Figure 4). 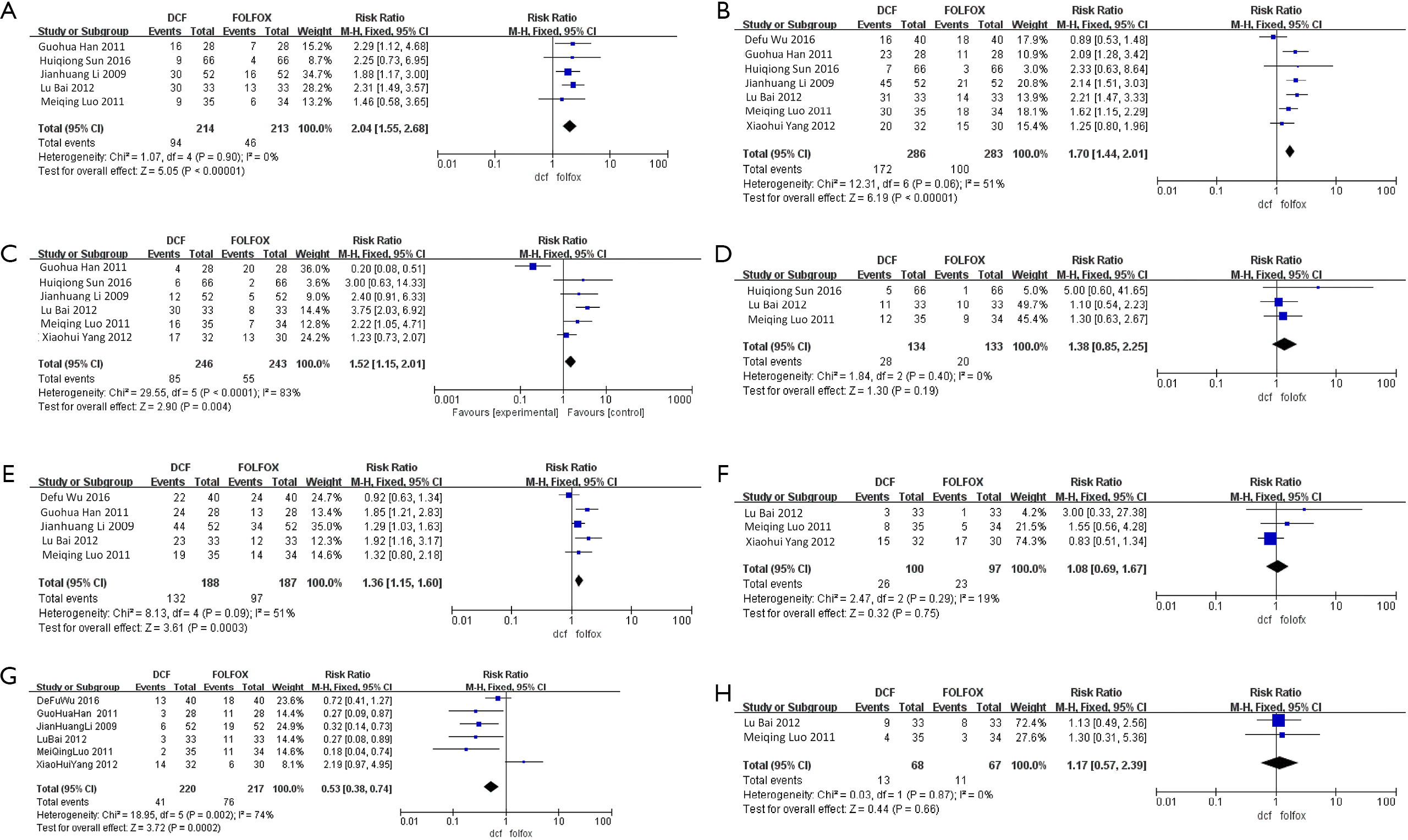 The 7 included studies were grouped according to the cumulative therapeutic doses of FOLFOXs regimen, which were mainly divided into FOLFOX4 regimen group and FOLFOX6 regimen group (group III). FOLFOX4 regimen group can be divided into groups I and II according to the doses of fluorouracil used (Table 4). The differences in efficacy and adverse effects of each cumulative therapeutic dose in the FOLFOXs regimens were analyzed. There were no significant differences in efficacy between the three groups (P=0.233). Analysis of the adverse reactions showed no significant differences in the incidence of diarrhea, hepatorenal dysfunction, and oral mucositis between the groups.

Hacibekiroglu et al. (28) retrospectively analyzed the efficacy and safety of modified FOLFOX6 regimen and DCF regimen as the first-line treatment for advanced gastric cancer, and it showed that the efficacy of modified FOLFOX6 was comparable to that of DCF regimen, while toxicity analysis showed that the adverse reactions of DCF in the blood system were significantly higher than that of modified FOLFOX6, however, as it was a retrospective analysis, the number of studies of the two regimens was quite different. Only the FOLFOX6 regimen was studied. Besides, it was unable to include all FOLFOXs regimen within the FOLFOX4 regimen, making it less precise in evidence-based medicine. In this study, through meta-analysis of 9 included studies, it showed that in the treatment of advanced gastric cancer, the efficacy of DCF regimen was similar to that of FOLFOXs regimen and the ORR and DCR were not statistically significant, but the adverse effects of the FOLFOXs regimen were significantly lower than that of the DCF regimen. This result can more comprehensively demonstrate the advantages and disadvantages of the clinical application of the two regimens. At present, the studies on long-term effects of chemotherapy for advanced gastric cancer such as surgical resection rate, disease-free survival, disease-bearing survival, and overall survival time was relatively scarce, thus it is impossible to make a more systematic and accurate analysis on the chemotherapy regimens. At the same time, as the 9 included studies did not give a more detailed description of TNM stage, thus it was impossible to perform a subgroup analysis based on the TNM staging of the patients between the two groups to provide a more individualized efficacy evaluation.

In conclusion, the results of this meta-analysis showed that the efficacy of FOLFOXs regimen was comparable to that of DCF regimen in the treatment of advanced gastric cancer, but the incidence of adverse reactions was significantly lower, and there was no difference in efficacy between different treatment doses. Due to the limitations in the study area and quality of the included studies, the conclusions of this study still need to be further verified by more large-scale clinical studies.

Reporting Checklist: The authors have completed the PRISMA reporting checklist. Available at http://dx.doi.org/10.21037/tcr-19-2564

Conflicts of Interest: All authors have completed the ICMJE uniform disclosure form (available at http://dx.doi.org/10.21037/tcr-19-2564). The authors have no conflicts of interest to declare.

Open Access Statement: This is an Open Access article distributed in accordance with the Creative Commons Attribution-NonCommercial-NoDerivs 4.0 International License (CC BY-NC-ND 4.0), which permits the non-commercial replication and distribution of the article with the strict proviso that no changes or edits are made and the original work is properly cited (including links to both the formal publication through the relevant DOI and the license). See: .