The efficacy of ado-trastuzumab emtansine in patients with ERBB2-aberrant non-small cell lung cancer: a systematic review

Non-small cell lung cancer (NSCLC) accounts for 85% of all lung cancer cases and is associated with a 5-year survival rate of 15% (1). ERBB2, as a known proto-oncogene, was originally observed during oncogenic activation in breast cancer. Trastuzumab, a monoclonal antibody against ERBB2, has been recommended as the first-line treatment combined with pertuzumab plus docetaxel for ERBB2-positive metastatic breast cancer (2). ERBB2 is also a potential oncogenic cause of NSCLC. Recent literatures revealed that the frequency of ERBB2 gene mutation, gene amplification, protein overexpression in NSCLC were 1–4% (3-7), 2–5% (8-10) and 10–15% (11,12), respectively. However, the exact efficacy of trastuzumab monotherapy was disappointing with an overall response rate (ORR) of 0% (0/10), in patients with diverse ERBB2 alterations (13). Trials of trastuzumab combined with chemotherapy in patients with ERBB2-mutated lung cancer resulted in a response rate up to 50% (14-16). For ERBB2-overexpressed and EGFR-mutant NSCLC, trastuzumab combined with chemotherapy exhibited an ORR of 67% in those with an ERBB2 immunohistochemistry (IHC) status of 3+ (17). ERBB2 pathway activation might contribute differently to the pathogenesis of lung cancer, and in turn, therapies targeting ERBB2 could lead to distinct outcomes (18). As a novel ERBB2-targeted agent, ado-trastuzumab emtansine (T-DM1) is an antibody-drug conjugate composed of trastuzumab and the cytotoxic agent mertansine. T-DM1 binds to ERBB2-aberrant cancer cells and elicits an anti-microtubule response resulting in internalization. T-DM1 is recommended as the second-line treatment in patients with ERBB2-positive metastatic breast cancer who previously received treatment with trastuzumab and taxane (19). And breast cancer patients with ERBB2 protein and mRNA overexpression achieved a better response to T-DM1 (20-23).

However, existing studies concerning NSCLC patients with ERBB2 aberrations have resulted in different conclusions. A basket trial showed an ORR to T-DM1 of 44% in patients with ERBB2 gene mutations (24) and of 43% in patients with ERBB2-amplified lung cancer (25), whereas Hotta and colleagues reported ORRs for ERBB2 gene mutations and amplification as low as 14% and 0%, respectively (26). Another recent study showed that only 4 of 49 patients with ERBB2 protein overexpression showed a partial response (27). This discrepancy could be partly explained by the small sample sizes and single-arm and single-center designs of most studies. In addition, whether concomitance of different ERBB2 alternations affects T-DM1 efficacy is unknown. In the present study, we determined the therapeutic efficacy and safety of T-DM1 on diverse subsets of patients with ERBB2-aberrant NSCLC, by integrating and reanalyzing the data from currently available reports. We present the following article in accordance with the PRISMA reporting checklist (available at http://dx.doi.org/10.21037/tcr-19-2759).

We performed a systematic search to select original articles and meeting abstracts in English in PubMed and EMBASE published through June 2020, using combinations of the following key words: (“Trastuzumab emtansine” or “T-DM1”) and (“lung cancer”) and (“HER2” or “HER-2” or “ERBB2”). We reviewed the reference lists of all primary studies, meeting abstracts, and review articles for additional references. All eligible studies were retrieved. Case reports were excluded. When duplicate publications of the same trial were found, the most complete and recent study was included. The criteria for inclusion were studies involving that patients diagnosed with NSCLC harboring ERBB2 aberrations who were treated with T-DM1 regardless of previous treatments, and studies reporting ORRs.

ERBB2 aberrations were defined as ERBB2 gene mutation, gene amplification, or protein overexpression. In our analysis, gene mutations were detected directly by next-generation sequencing (NGS) or polymerase chain reaction (PCR). ERBB2 gene amplification was assessed by fluorescent in situ hybridization (FISH) and defined by an ERBB2/CEP17 ratio of ≥2.0. ERBB2 protein overexpression was assessed by IHC and defined by an IHC score of 2+.

Two independent investigators searched and reviewed the articles to exclude irrelevant and overlapping studies, with disagreements resolved by consensus, to ensure the completeness and quality of the analysis. Statistical analysis was carried out in R software (version 3.6.1). The rate is converted and combined using a double inverse sine conversion method. Heterogeneity was assessed using Q test. When P<0.1, the studies were considered to be heterogeneous and a random effects model was adopted, otherwise the fixed effect model was adopted. Publication bias via the Egger test and sensitivity analysis were also estimated.

We initially identified 223 studies by full-text screening using the above-mentioned search strategy. However, 174 studies not relevant to our analyses were excluded. After reviewing the full texts of the remaining 49 studies, we excluded 31 studies that were not clinical studies with outcome, including 17 review articles, 9 preclinical studies, 2 study protocols and 3 studies without efficacy analysis. And 7 case reports and 6 duplicate reports were also excluded. Finally, 5 eligible studies involving a total of 120 patients were included in the analysis (Figure 1) (24-28). Of note, 18 patients in study by Li in 2020 (28) were duplicates to those in Li’s study in 2018 (24), therefore only the remaining 31 patients in Li’s study 2020 were involved in analysis. 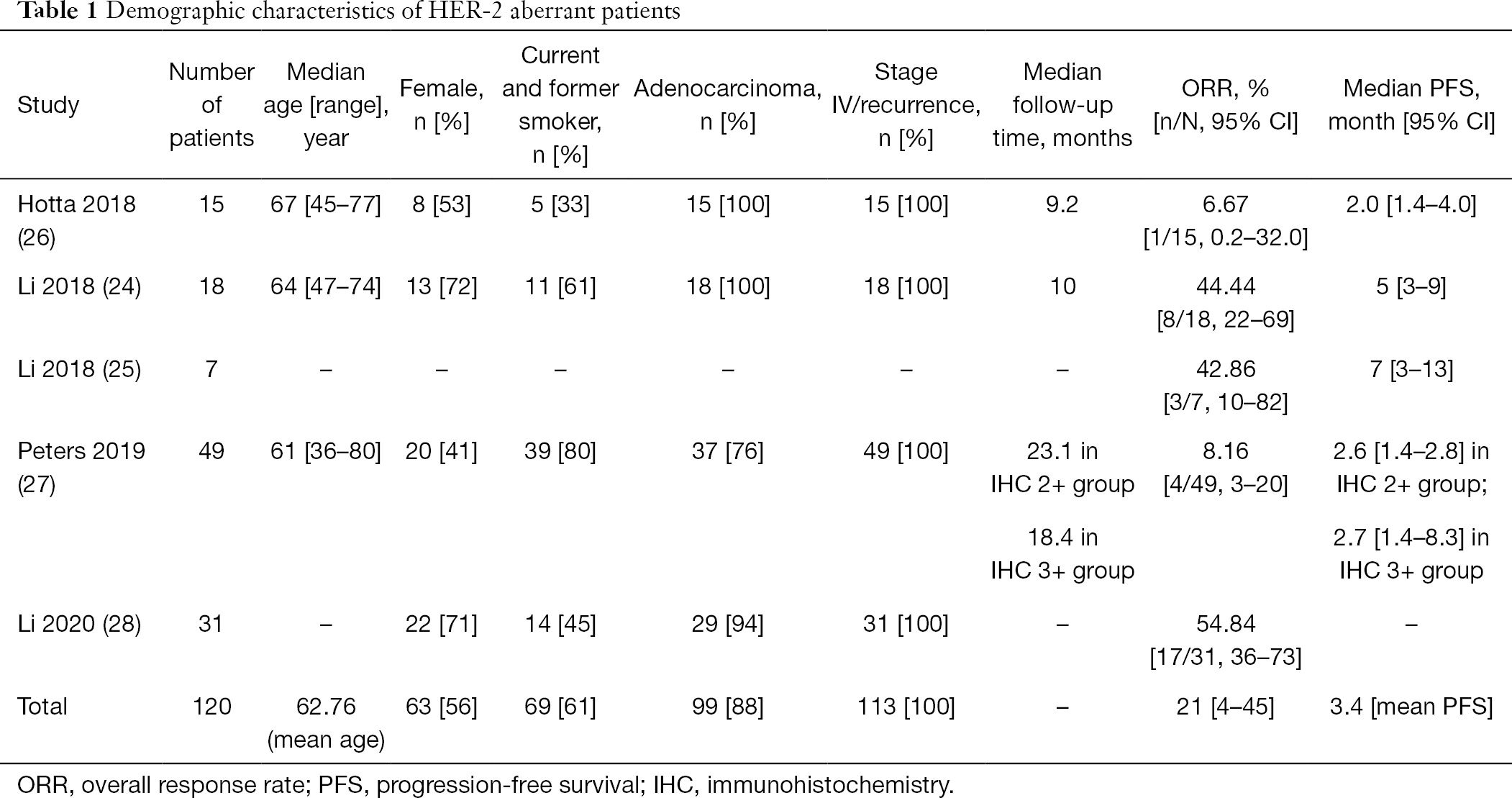 Flow chart of the literature search and trial selection process.

Demographic characteristics of HER-2 aberrant patients

In addition, the effect of various ERBB2 mutations on the efficacy of T-DM1 was assessed (Table 2). ERBB2 exon 20 insertion was the most commonly reported mutation, associated with an ORR of 40% (95% CI: 18–61%). More specifically, the ORR for exon 20 p. A775_G776insYVMA was 43% (95% CI: 22–65%) (Figure 3). However, no meaningful conclusions regarding which mutation was associated with the best T-DM1 efficacy could be reached due to the small sample size. 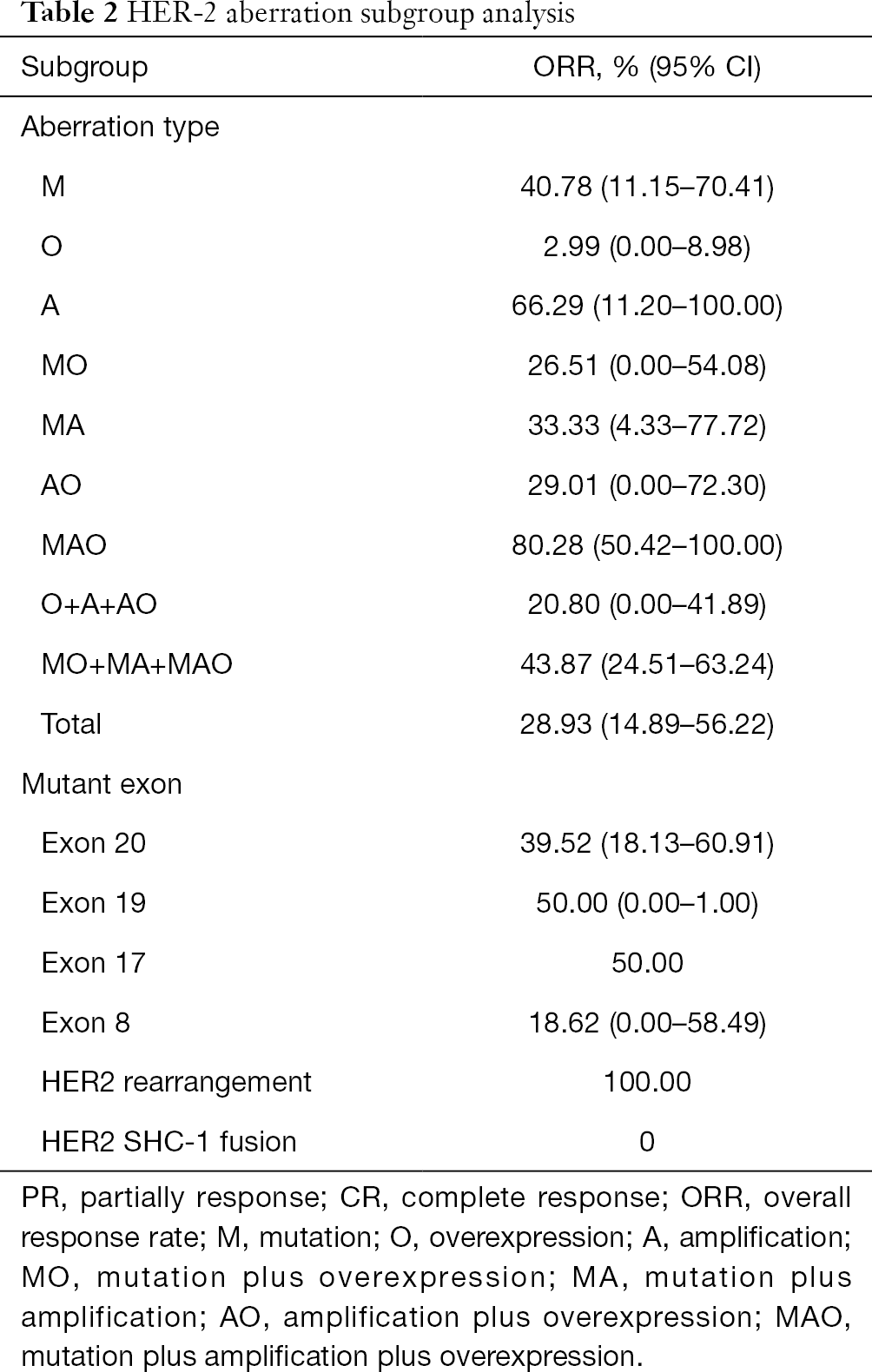 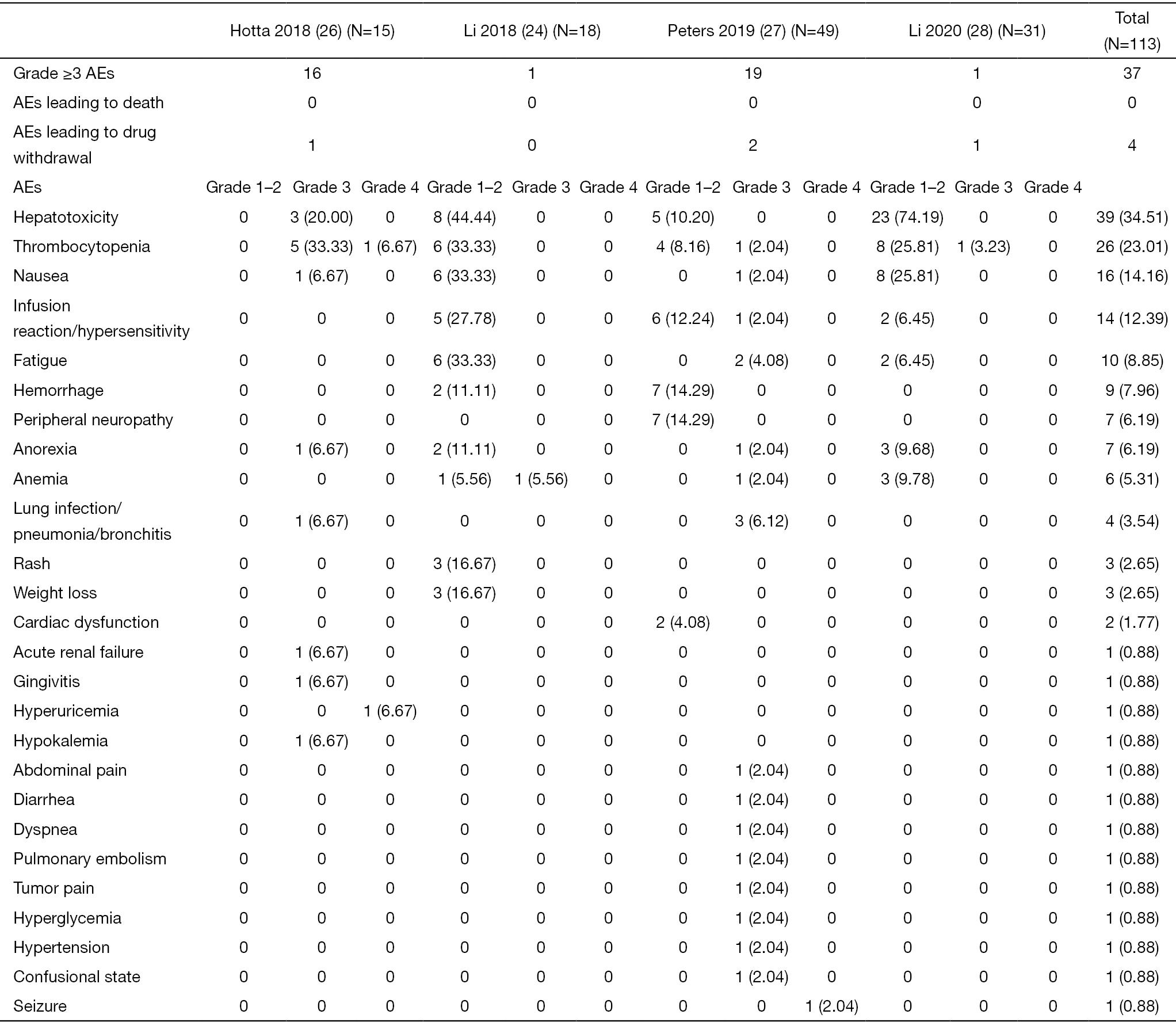 The Egger test showed no publication bias in ORR of ERBB2 aberrations (P=0.08958) in response to T-DM1. The sensitivity analyses demonstrated that almost all estimated values were between the lower and upper confident interval limits (Tables 3,4), hence, the analysis was considered to be stable and the included studies reliable. 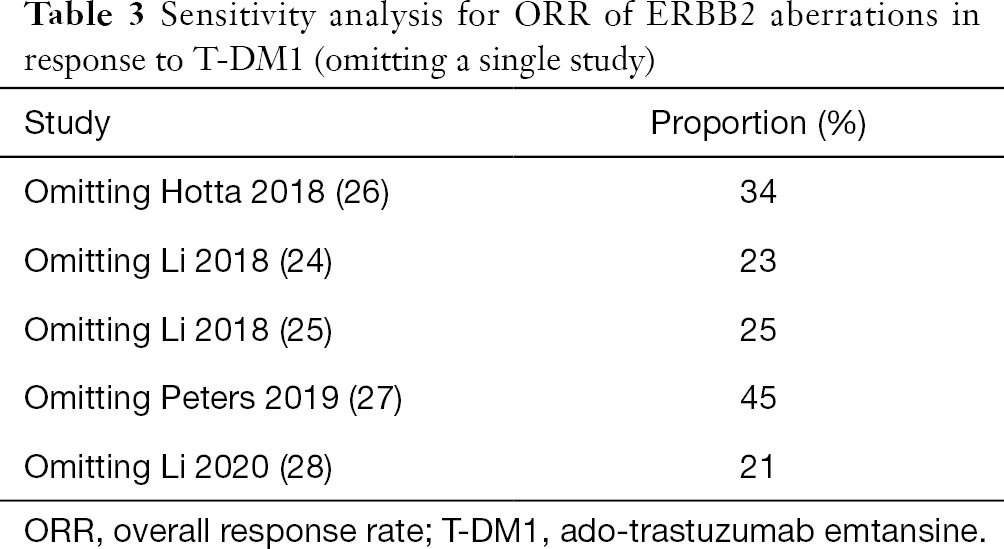 Sensitivity analysis for ORR of ERBB2 exon 20 p.A775_G776insYVMA in response to T-DM1 (omitting a single study)

ERBB2 gene mutations may be more relevant in lung cancer carcinogenesis compared with ERBB2 upregulation, and several tyrosine kinase inhibitors (TKIs), targeting both EGFR and ERBB2 have been assessed for the treatment of lung cancer harboring ERBB2 aberrations. Afatinib, an EGFR/ERBB1, ERBB2, and ERBB4 inhibitor, was evaluated in our meta-analysis recently. We reported the pooled ORR of 21% and the pooled DCR of 66% in treating ERBB2 mutations. The patients harboring A775-G776ins YVMA mutation, the most common subtype of HER2 exon 20 mutation, derived greater clinical benefit (36). Dacomitinib, another pan-ERBB TKI, was investigated in patients with ERBB2-mutated and ERBB2-amplified lung cancer, with an ORR of 12% (3/26) for ERBB2-mutated cancers but of 0% (0/4) for ERBB2-amplified cancers (37). Neratinib, a TKI targeting EGFR and ERBB2 receptors, showed an ORR of 3.8% (1/26) in patients with ERBB2 mutations (38). Studies of lapatinib, an inhibitor of EGFR and ERBB2, failed to elicit a positive response in patients with ERBB2 gene amplification or mutations. None of five patients with ERBB2 gene mutations achieved a partial response (15), and one of two patients with ERBB2 amplification had unconfirmed tumor shrinkage (39). On the other hand, antibody and antibody drug conjugates also confer sensitivity to HER2 mutations. Trastuzumab and pertuzumab combination therapy was investigated in patients with ERBB2 overexpression plus amplification and mutation. The ORR was 12.5% (2/16) and 21.4% (3/14), respectively. Although limited sample size, mutant patients might benefit more from antibody therapy (40). Trastuzumab deruxtecan (DS-8201a) is an antibody-drug conjugate comprised of an ERBB2-targeting antibody and a topoisomerase I inhibitor. The observed ORR was 61.9% (26/42) in ERBB2-mutated group with median PFS of 14 months (41). Collectively, DS8201a might be a candidate agent targeting ERBB2 aberration, and afatinib showed some degree of efficacy for treatment of ERBB2-mutated lung cancer, whereas neratinib, dacomtinib and lapatinib had very limited therapeutic benefit for ERBB2-aberrant lung cancer.

Our study had some limitations. Because of the low frequency of ERBB2 aberrations, only five studies involving 120 patients were included in our analysis. However, we incorporated all currently available data evaluating the role of T-DM1 in ERBB2-aberrant NSCLC. Secondly, most enrolled studies were single-arm designs with incomplete demographic data which led to the significant heterogeneity between studies, so the evaluation of confounding factors was not definitive. In addition, we only compared ORRs, rather than progression-free survival or overall survival rates, because long-time survival outcomes were not available in the enrolled articles.

Reporting Checklist: The authors have completed the PRISMA reporting checklist. Available at http://dx.doi.org/10.21037/tcr-19-2759

Conflicts of Interest: All authors have completed the ICMJE uniform disclosure form (available at http://dx.doi.org/10.21037/tcr-19-2759). The authors have no conflicts of interest to declare.