Endocrine therapy remains the standard of care for hormone receptor positive (HR+), HER2 negative (HER2−) breast cancer. Clinically approved endocrine agents include selective estrogen receptor modulators (SERMs), aromatase inhibitors (AIs), and selective estrogen receptor downregulators/degraders (SERDs). These therapeutic regimens are well tolerated with manageable side effects and have proven effective in early stage breast cancer with curative intent. In the metastatic or advanced setting, endocrine therapy improves patient survival and quality of life, with eventual resistance development and disease progression. Fulvestrant is the only FDA approved SERD indicated for metastatic/advanced HR+ breast cancer. In 2002, fulvestrant was first approved as a second line endocrine treatment for patients with disease progression on first line antiestrogen therapy following two phase III studies comparing the efficacy and safety of fulvestrant with anastrozole (1). In 2017, 15 years after the first approval, fulvestrant was approved as a first line agent for patients with advanced or metastatic breast cancer (2,3). This approval came after a pivotal clinical trial (FALCON) comparing the efficacy of anastrozole and 500 mg fulvestrant in endocrine naïve patients, which demonstrated that fulvestrant treated patients had a significantly longer progression free survival (PFS) and overall survival (OS) than those taking anastrozole (4). Fulvestrant is also the first endocrine agent to be approved in combination therapy with CDK4/6 inhibitors for metastatic/advanced breast cancer (5).

Fulvestrant was developed as a pure antiestrogen by modification of long-chain alkyl substitutes in the 7α-position of estradiol (6,7). The steroidal antiestrogen was shown to have no estrogen receptor agonist or partial agonist effects in any species or organ where other antiestrogens show tissue-selective agonistic activities such as tamoxifen and raloxifene. Fulvestrant is able to overcome the estrogenic effects of estradiol and tamoxifen in preclinical models in a dose-dependent manner. In xenograft tumor models, fulvestrant also demonstrates superior antitumor activity compared with tamoxifen. The ability of fulvestrant to reduce the cellular content of the estrogen receptor by reducing the half-life of the protein was confirmed in clinical trials (8,9). Importantly, the decrease in ER protein level by treatment of fulvestrant did not involve a change at the mRNA level (9).

The clinical efficacy of fulvestrant and the apparent lack of cross-resistance to tamoxifen and AIs are attributed to its distinct mode of action, namely the pure antiestrogenic properties of the drug. This mode of action is shown to be the result of a unique, unstable ER conformation upon binding with fulvestrant, which inhibits ER dimerization and nuclear translocation (10,11). But because this conformational change rapidly leads to proteosomal ER degradation, fulvestrant’s deeper and more durable blockade of ER-dependent signaling in breast cancer is therefore considered a result of the ultimate downregulation of the nuclear receptor at the protein level (12).

Despite the establishment of fulvestrant as an effective second line endocrine treatment in 2002, and recently as a first line therapy superior to anastrozole for advanced HR+ breast cancer (2,3), its poor pharmacokinetic properties and insufficient drug exposure are believed to limit clinical response that could be further improved. Indeed, efforts to increase fulvestrant exposure through multiple clinical trials between 2005 and 2009 led to subsequent approval of a higher dosage fulvestrant in 2010 (13). Still, clinical studies indicate that at 500 mg, the maximum injectionable limit has been reached, but the maximum therapeutic effect has not (14). Thus, a potent, orally bioavailable SERD that could achieve higher steady-state drug levels more rapidly would have the potential for increased receptor knockdown and lead to quicker clinical responses, reducing the possibility of early relapses. This unmet clinical need has driven extensive efforts to develop oral SERDs in the past ten years, culminating in as many as 13 oral SERDs entering clinical trials (NCT01823835, NCT02316509, NCT02248090, NCT03916744, NCT04214288, NCT02734615, NCT03284957, NCT03455270, NCT04188548, NCT03471663, NCT03596658, NCT04176757, NCT02338349). From available study reports describing the discovery and development of these oral SERDs, which are invariably non-steroidal small molecules characterized by an ER binding motif and a side chain featuring either an acrylic acid or an amino base terminal that confer antiestrogenic and ER degrading activities. As oral SERDs were sought to improve upon fulvestrant, a full antagonist and ER downregulator, optimization of ER degradation has been the strategy to identify lead compounds that possess fulvestrant-like mode of action, and preclinical studies of oral SERDs typically employ fulvestrant as a standard of reference in the evaluation of efficacy and bioavailability. While in vitro pharmacology studies compare dose-dependent activities of candidate oral SERDs with those of fulvestrant, in vivo efficacy studies often measure the efficacy of oral SERDs at various doses in comparison to that of fulvestrant treatment group given a widely adopted dose of 200 mg/kg via s.c. injection.

SERD-like properties were first reported in a nonsteroidal, tamoxifen-like molecule known as GW5638 (16), although the compound was initially developed to spare uterotrophic effect while acting as an antagonist in mammary cells. Importantly, GW5638 was found to be effective in tamoxifen resistant breast cancer, had no agonist effect in the uterus, and degraded ER by conformational changes that increased hydrophobic surface and instability of ER. A study by Fan et al. showed that the acrylic acid moiety in GW5638 was key to impart the ER downregulation activity (17). These findings informed further development of structurally similar, preclinically improved oral SERDs that entered clinical trials beginning in 2013 (NCT01823835, NCT02248090), more than a decade after the inconclusive clinical trial of GW5638 (18). The oral SERDs with disclosed structures are shown in Figure 1, all of which are nonsteroidal. 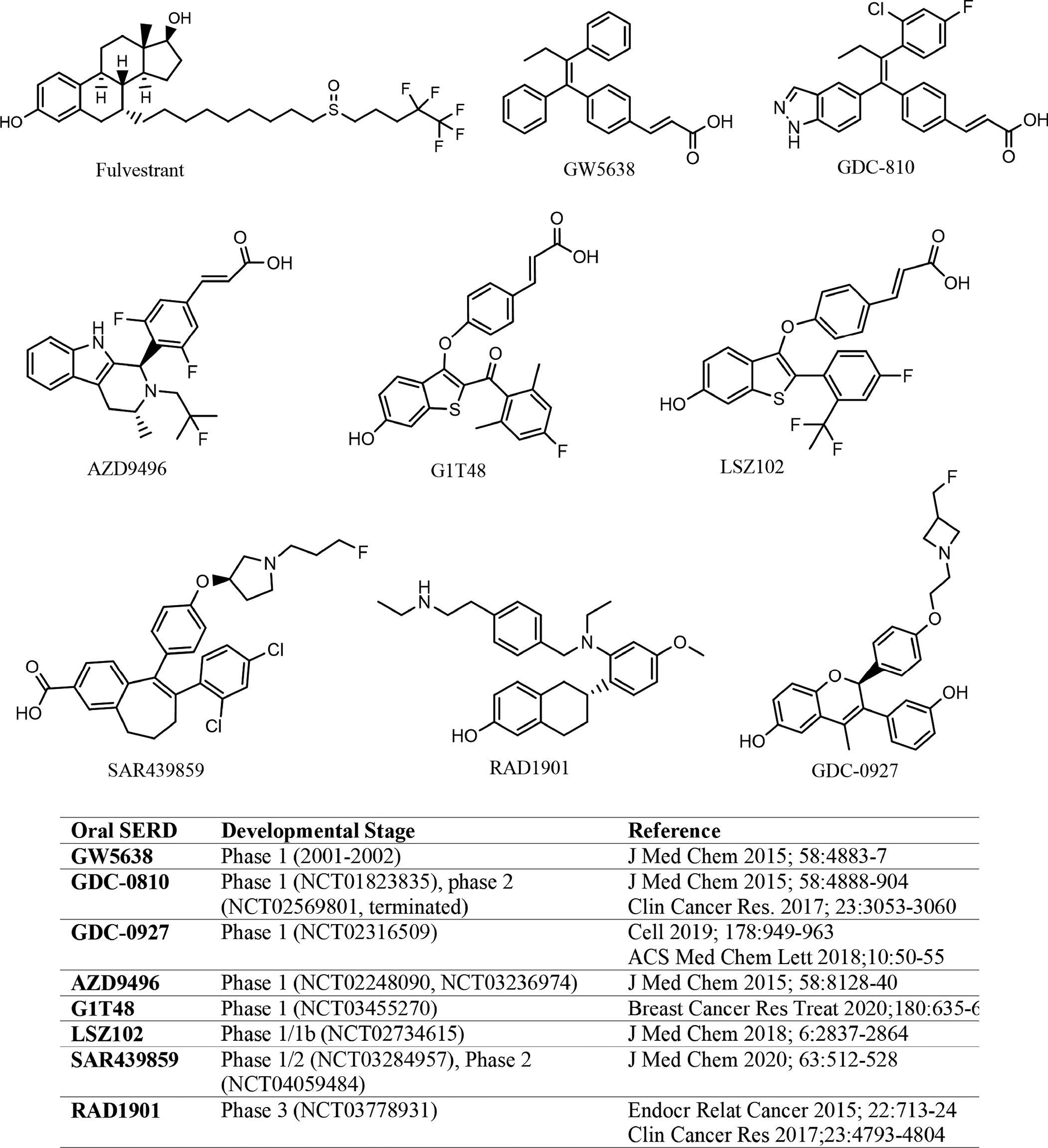 The preclinical development of GDC-0810 was well documented (19,20) where the drug candidate was evaluated extensively in mode of action validation, pharmacokinetics, pharmacodynamics, and efficacy in endocrine resistant breast cancer models. Notably, GDC-0810 was tested against fulvestrant, GW5638, and SERMS for effects on transcriptional activity, ER binding, ER degradation, tissue selectivity, and xenograft tumor growth (19,20). Fulvestrant dose ranged from 25 to 200 mg/kg in diverse clinically relevant tumor models in which GDC-0810 efficacy was found to be comparable to or better than that achieved by the highest fulvestrant dose. The use of high dose fulvestrant as a comparison group in the preclinical evaluation of GDC-0810 unlikely served as a benchmark criterion over which a drug candidate made the cut. Rather, the maximum achievable efficacy in animal models by fulvestrant provided a measure for the drug exposure needed for the oral SERD candidate to achieve similar or better results. Even so, when GDC-0810 was compared with fulvestrant in a phase 2 trial (NCT02569801), it failed to show comparable or superior efficacy and the study was terminated.

Similarly, in the preclinical development of AZD9496, fulvestrant was employed as a benchmark reference in all in vitro and in vivo pharmacological studies of the oral SERD candidate (21,22). AZD9496 was shown to bind both wild type and mutant ER with greater affinity than fulvestrant, inhibit ER+ breast cancer cell proliferation more potently than fulvestrant, and blocking tumor growth in endocrine resistant, ESR1 mutant breast cancer models more efficaciously than fulvestrant. In a diverse panel of clinically relevant breast tumor models, AZD9496 consistently demonstrated superior efficacy when compared with fulvestrant administered at 200 mg/kg, a clinically unachievable dose and drug exposure. Despite this preclinically observed advantage over fulvestrant, in a randomized, window of opportunity study comparing AZD9496 with fulvestrant in patients with ER+, HER2− primary breast cancer, the oral SERD was inferior to fulvestrant in both anticancer efficacy and reduction of ER and PR expression (23).

As oral SERDs, all of the investigational new drug molecules that have been developed so far possess the dual mechanisms of action: selective ER antagonism and ER degradation. Indeed, a pure antiestrogen that does not significantly downregulate the estrogen receptor has yet to be identified. Conversely, a pure ER degrading agent, in the form of PROTAC, has been developed into phase 1 clinical trial (NCT04072952). In this case, the ER-binding warhead can be a SERM moiety which does not induce hydrophobic surface exposure and result in receptor degradation. Rather, the other end of the PROTAC molecule engages an E3 ligase to ubiquitinate ER and degrades it in a catalytic manner. Thus pure antagonism of ER is realized by elimination of the receptor, rather than conformational changes of ER to block recruitment of co-factors required for ER transcriptional activation.